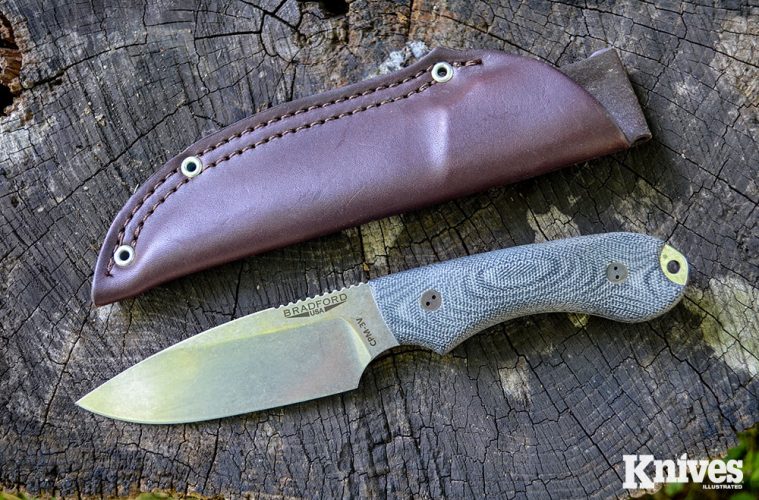 Review: The Guardian4 from Bradford Knives

THE GUARDIAN4 FROM BRADFORD KNIVES IS BUILT TOUGH AND SIZED RIGHT

When the chips are down and you truly need to rely on a blade to make it home again, you need something that you can be confident won’t let you down. It needs to be tough, no question. It needs to be reliable, absolutely. And it needs to be easy enough to carry that you won’t leave it home. The Bradford Knives Guardian4 ticks all of those boxes.

“The Guardian4 is a great size for those seeking a general-purpose survival knife, one that’s suited for extended outdoor use and abuse.”

Since 2012, Brad Larkin has been producing top-notch knives in his Kent, Washington, shop. He has a background in manufacturing and has used that knowledge, along with contacts he’s made for source materials, to design blades that are built to last and made with USA-sourced components.

I’ve had a couple of Bradford knives in the past and found them to be pretty much bomb-proof. The Guardian series currently consists of a whopping dozen different models, ranging from the lightweight G-Necker to the Guardian6, which tops out at a full 11 inches in length. Each model is designed for real world use and abuse, with nary a safe queen to be had. The Bradford Knives Guardian4 is a mid-sized knife in the company’s Guardian lineup, and it would make a good choice for most field needs.

When the opportunity arose to test out the Guardian4, I was more than happy to take on the assignment. This model is sort of the middle of the road in the series. Bradford’s website indicates that the Guardian4 is intended for survival or tactical purposes. Let’s take a look.

FRESH FROM THE BOX

The first thing I noticed upon picking up the knife was the contoured handle. Unlike some knives where you have to choke up on the handle to make use of the finger choil, this choil is used full-time. It took a little getting used to for me. It wasn’t uncomfortable, just different than I’m used to with most of my other knives.

“I went into the review expecting a robust, well-performing blade and I wasn’t disappointed. ” The jimping on the spine runs for about 1.25 inches and is somewhat dulled so it isn’t uncomfortable under the thumb.

There is about 1.25 inches of jimping along the spine, right where the thumb naturally rests. The blade itself stretches 4.625 inches, with plenty of belly. This is a full-tang knife, with the handle scales 3D contoured from Micarta. I chose the black Micarta when I ordered this from DLT Trading (DLTTrading.com). Bradford offers several other options on its site, from various colors of Micarta to G10 or carbon fiber, with both of the latter carrying a small premium charge. 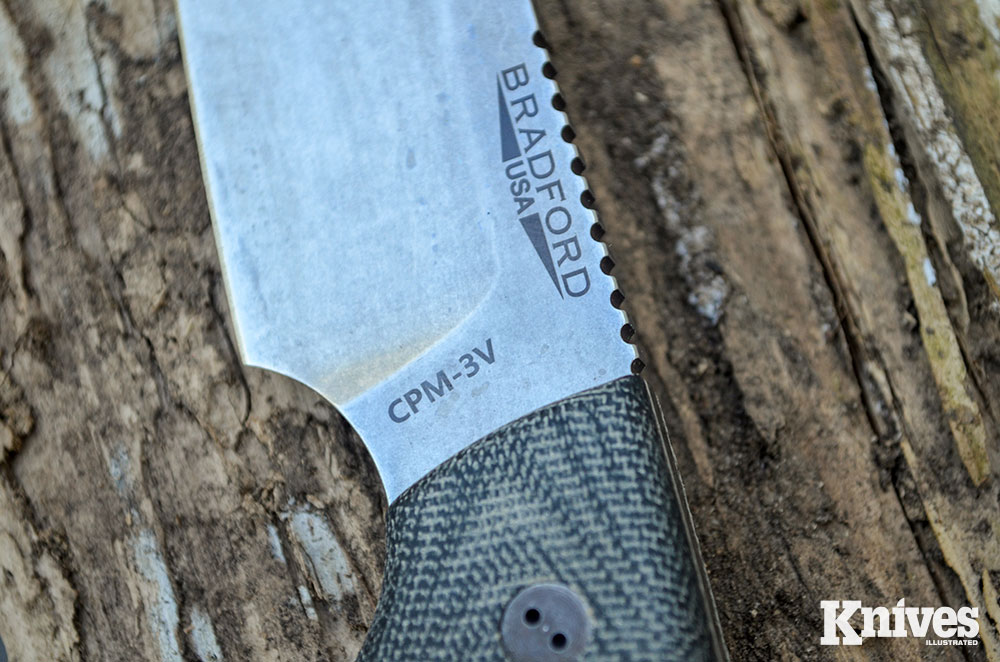 CPM-3V steel is a very tough steel with a fair amount of corrosion resistance, though it isn’t truly a stainless steel.

One problem area with this knife that I noticed right off the bat is the butt end where the Micarta is cut to fit around the lanyard hole. The edges of the scales here are kind of sharp and pointed.

Besides myself, three other people noticed this when I passed them the knife for their first impressions of it. This could be solved with just a minute or two with some emery cloth or a Dremel tool, of course, but any time I’m reviewing a knife, I leave it in the same condition as it arrived until I’m through with the evaluation. 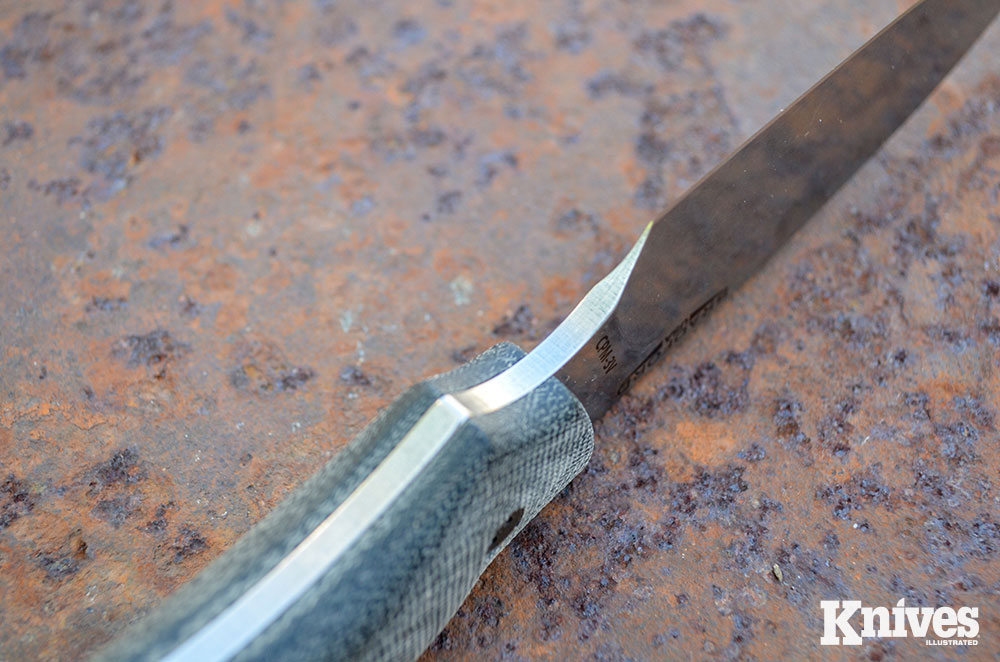 The finger choil is wide and comfortable with no sharp edges.

At 6.3 ounces, the Guardian4 isn’t cumbersome. That’s about the same weight as three tennis balls or a cup of blueberries. It feels solid, no question about it, but it isn’t going to keep pulling your belt down all day long. 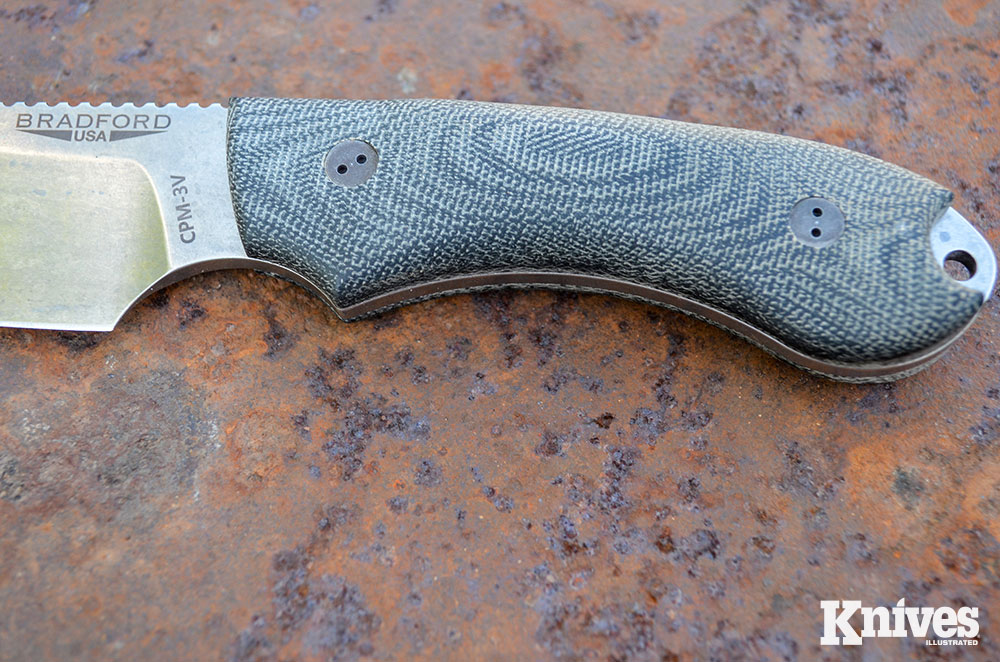 The Micarta is shaped and contoured for great ergonomics. 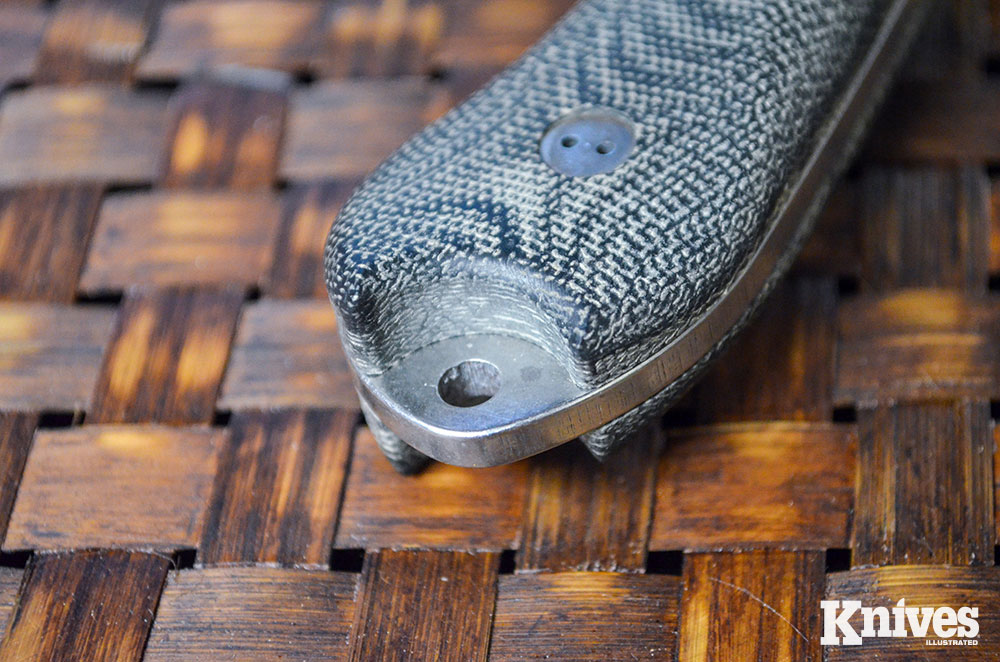 The Guardian4 comes with a great leather pouch-style sheath. It is friction held; there are no straps or snaps to keep the knife in place. The leather is double-stitched, reinforced with three rivets, and there is a plastic liner inside the sheath. A large loop on the back allows for just about any size belt to be used.

PUTTING IT TO WORK

The Guardian4 accompanied me on a few outdoor excursions, where I used it to cut down offending branches and do a little carving and whittling here and there, which amounted more to just shaving wood than creating anything useful. After having it for a few months, I put it through some specific tests. Bear in mind that at no time from the moment it arrived on my doorstep through the end of the evaluation did I sharpen, strop, or otherwise touch up the blade’s edge.

I hate to call this feather sticking, as I can never get the “feathers” to stick, so to speak. But I can make wood shavings with the best of them. I went out to the brush pile, grabbed an old branch, and went to work. The knife did great with peeling off bark and thin layers of wood. However, I tend to hold close to the butt end, and thus that sharp bit of Micarta was digging into the heel of my hand, which wasn’t comfortable. The knife, however, did just fine. 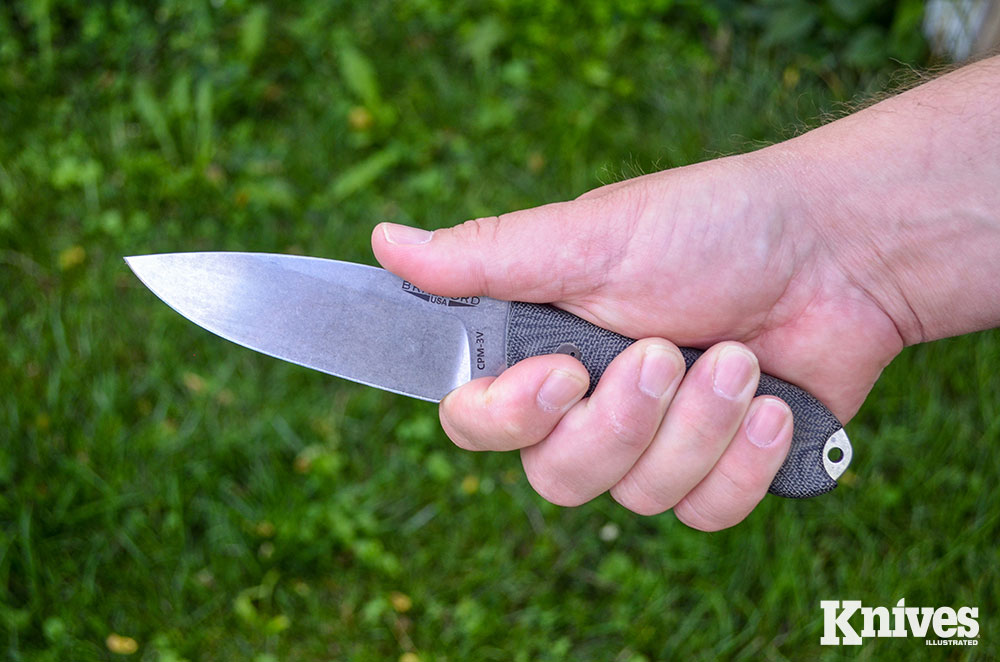 The author has large hands and the Guardian4 fills them with real estate to spare. In a reverse grip, the pinky rests in the finger choil. 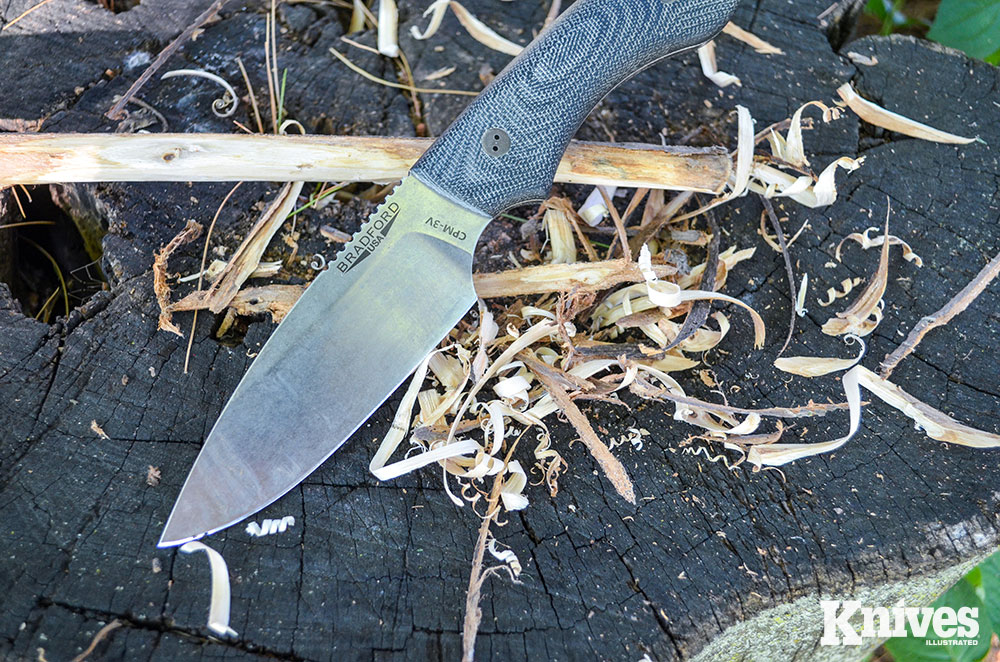 The Guardian4 is a great tool for forest and field use. It did great with producing plenty of thin wood shavings that would be suitable for fire starting.

While I was at it, I went ahead and chopped at the branch with the knife, just to see how it would handle. It cut into the wood fairly well with each snap of the wrist. However, the knife lacks the weight to be a true chopper. This was no surprise, but I figured it was worth checking the performance.

The other day, I came across a bundle of quarter-inch sisal rope in my garage. I have no clue where I picked it up in my travels, nor how long I’ve had it. Just one more thing that was destined for blade testing. I cut off about a 3-foot hunk and began slicing it into shorter and shorter pieces with the Guardian4. This is tough material on a blade, but the knife handled it well. I was able to cut three pieces at once, though it took quite a bit of force. 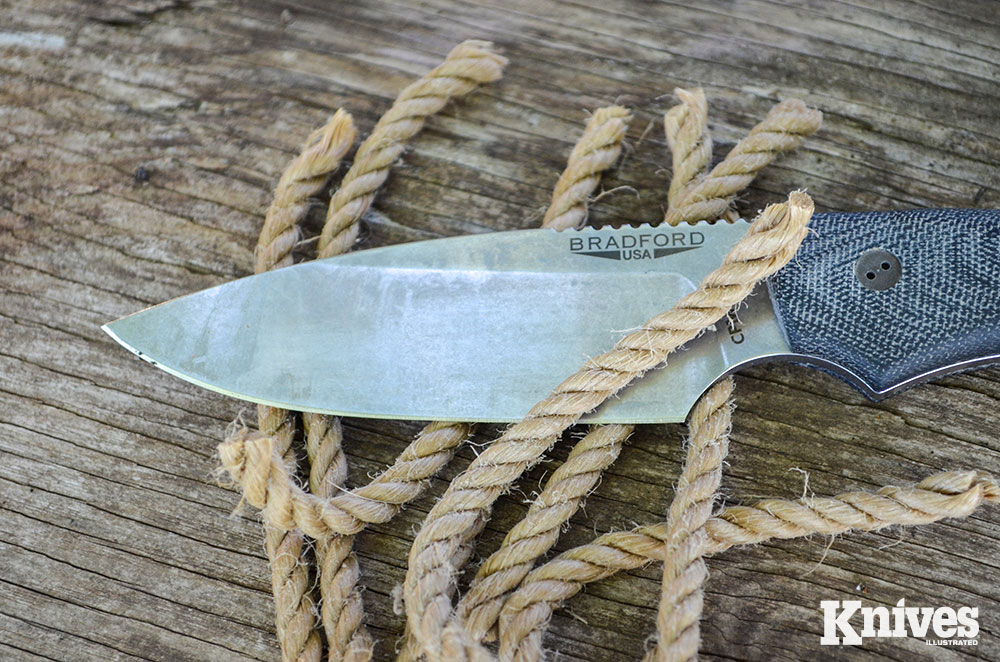 Sisal rope was sliced cleanly, though because of the toughness of the material it took a little force.

From there, I tried a few push cuts, but that wasn’t happening without quite a bit of rocking back and forth. Again, not a surprise given the coarseness of the rope, as well as the inevitable bit of dulling to the blade edge by this point.

Bringing the knife back into the house, I noticed the empty box on the table from an eBay purchase that had arrived earlier that morning. I set it on the counter and began slicing it into strips. The blade cut through fairly easily. Setting the strips flat, I did some pull cuts with the knife. I had to press hard to get the cuts to go all the way through, but other than that there was no trouble. It was obvious at this point that the knife’s edge was getting dull from use. 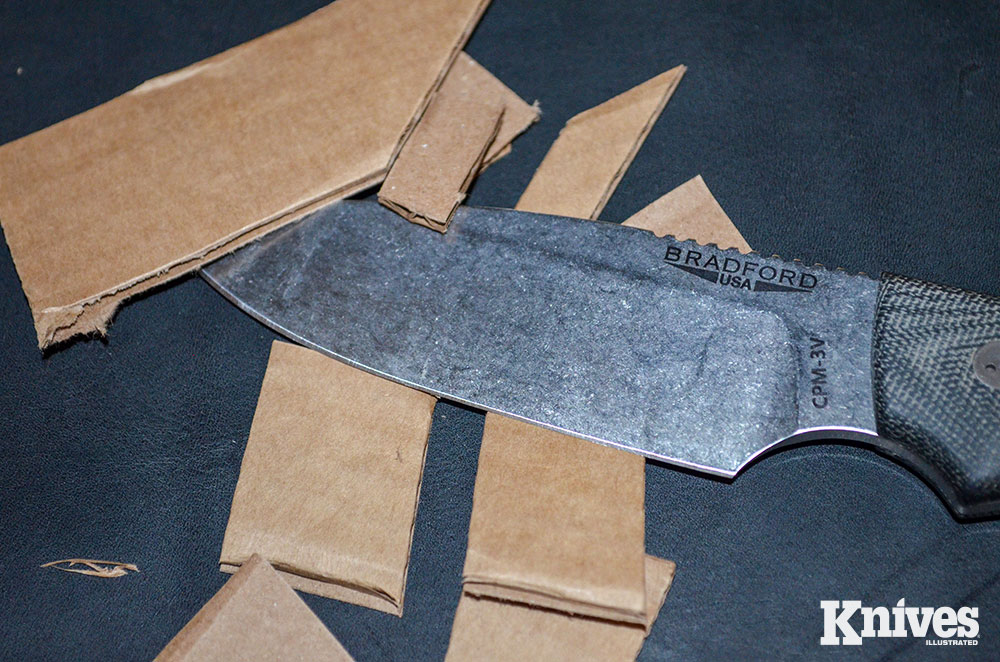 Cardboard is probably the single-most common material we cut with our knives. As expected, the knife made short work of it.

Finally, the all-important kitchen test. Regardless of the knife design, I always do at least one test with food. The idea is that if you’re out on the trail and this is your only knife, it’ll have to handle all of the standard blade chores. 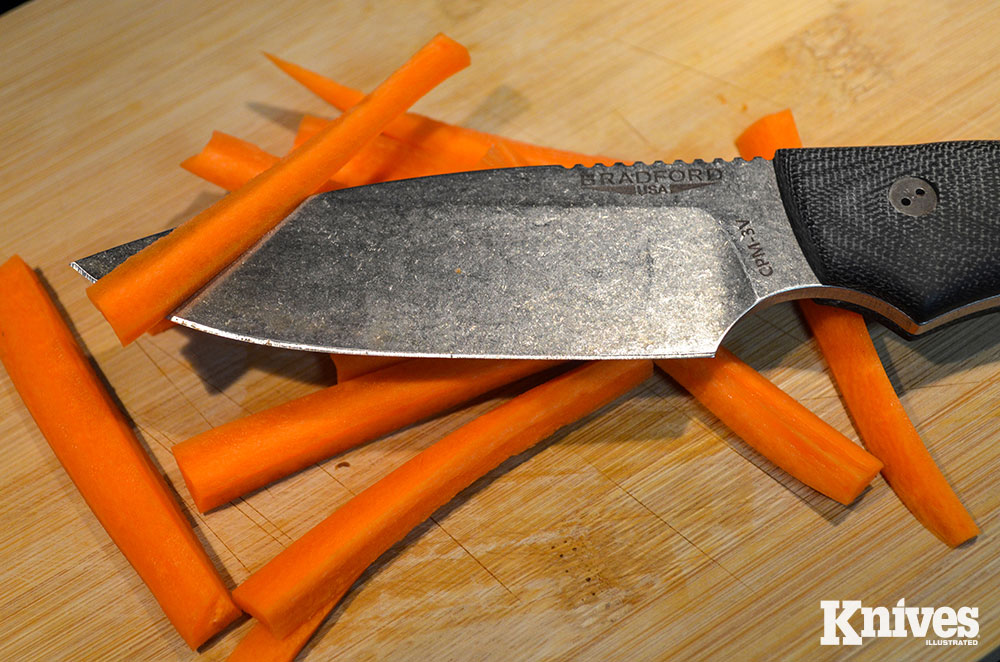 A quick carrot snack was prepared easily with this knife.

In this case, I raided the refrigerator for a couple of carrots, quickly peeled them, then set them on the cutting board. The Guardian4’s blade is 0.165 inch thick. As such, you can’t expect it to do exceptionally thin slicing. However, it performed quite well with the carrots. I lopped off the ends, cut them into short lengths, then sliced them lengthwise. The only issue I ran into was when trying to make truly thin bits. Slicing them was fine, chopping them not so much.

Honestly, there were few surprises with this knife. I went into the review expecting a robust, well-performing blade and I wasn’t disappointed. The Guardian4 is a great size for those seeking a general-purpose survival knife, one that’s suited for extended outdoor use and abuse. It will handle just about any routine knife chore around camp or in the field without issue.

“The Guardian4 comes with a great leather pouch-style sheath…The leather is double-stitched, reinforced with three rivets, and there is a plastic liner inside the sheath.” The knife rides deep in the heavy-duty leather sheath. While there’s no ferro rod loop, one could use a ranger band or similar for that purpose, if desired.

It loses a point, so to speak, for the sharp Micarta edge at the butt. Again though, this is easily remedied at home if it is an issue for anyone else. At the end of the day, I’d recommend the Guardian4 unreservedly to anyone seeking a knife that’s built for the long haul.

Most of the knives sold from the Bradford Knives website are available in three different blade finishes.

CPM-3V IS A TOUGH STEEL

While Bradford Knives also offers models in M390 steel, I chose to go with its CPM-3V model for this review. It isn’t truly a stainless steel, but it does very well with corrosion resistance. Mostly, it is known, though, for its toughness and wear-resistance. It offers exceptionally high impact resistance, even greater than A2 or D2. This is a steel that’s made for abuse, which makes it a great choice for outdoor knives.