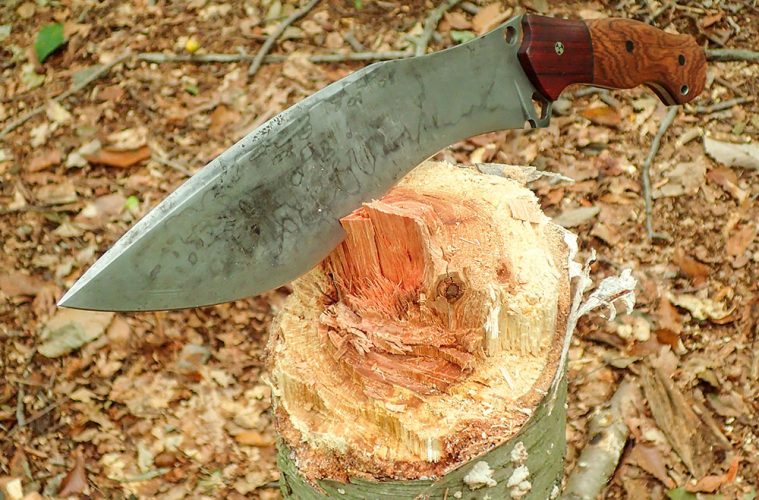 Custom knifemaker Ryan Weeks has a thing for hamon lines. His work can easily be spotted as his distinctive hamon and two-toned, exotic-looking handle scales scream, “It’s a Ryan W. knife.”

Since Ryan loves a hamon, W2 quickly became his favorite steel with its ability to have increased hardness. Ryan feels there is more activity in the W2 hamon. Larger blades benefit from the flex of the spine to reduce the chance of breakage, while the edge stays hard to stay sharp.

“I temper larger blades down more because I know they will take more abuse, making them more durable,” Ryan said. “On smaller blades, they are purely cosmetic; it adds depth/texture, making every knife unique.”

With tradition in mind, Ryan teamed up his Khuk with a small companion. In Nepal, almost every khukuri comes with a utility knife known as a karda. Ryan chose his Norfolk Bird and Trout Knife to be the karda for this setup—a wise choice. The Khuk Fighter is a large knife, to say the least. The total length is 16 1/2 inches, with a 10 1/2-inch blade.

“Let’s face it: the Khuk Fighter is a chopper. One look at it will tell you it was meant for wreaking havoc on wood, splitting, and chopping.”

“I wanted to create a hybrid that stood out,” Ryan said. “I love the belly and sweet spot of the khukuri, but wanted stability and light-in-the-hand feel, which is why I went with the 3/16-inch (thickness).”

The stunning handle scales are made from Honduran rosewood and cocobolo, with a mosaic pin and lanyard tube. The top forward edge can be sharpened further. However, it is sharp enough to peel the bark from a branch and easily strike a ferro rod. To avoid damage or dulling of the primary cutting edge, this “false edge” can be used to break bones. On a more sinister note, it would aid in penetration if needed—hence the name. 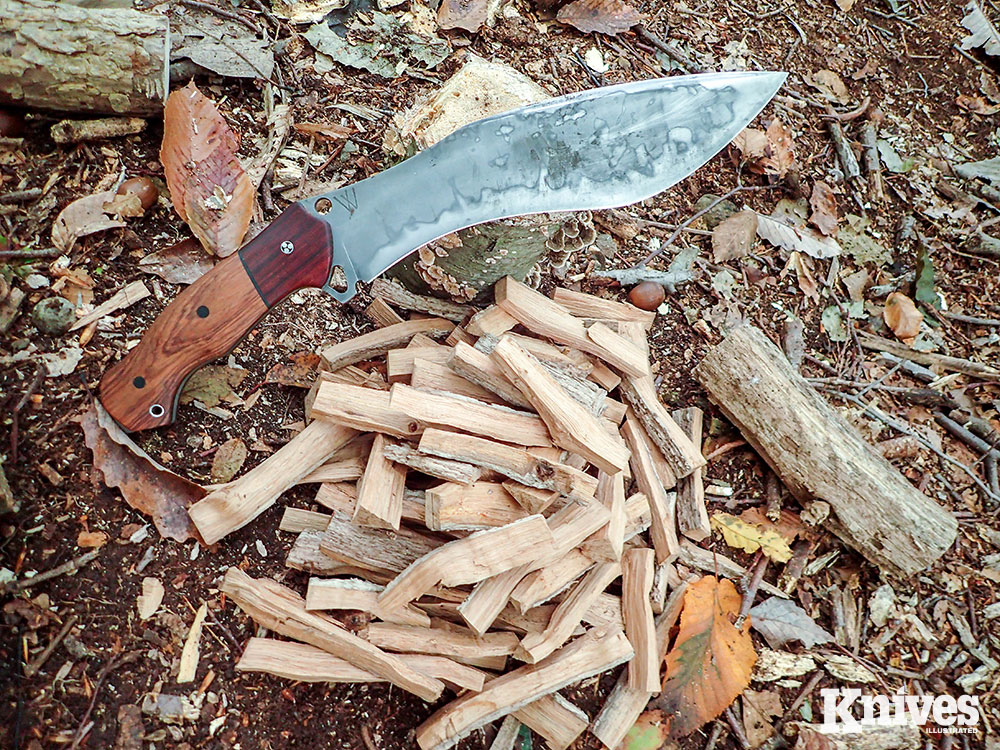 The author chopped dead maple branches and split small oak rounds for wood stove fuel. A baton was used to split the oak into even pieces with more control than chopping.

“The Khuk Fighter is ground pre-heat treat as a flat grind then convexed to final thickness after heat treat, which creates a teardrop shape that leaves a lot of meat behind the edge for heavy work,” Ryan said. “I distal taper the belly section to accomplish the ‘Fighter’ side of the family, keeping it light in the hand.” 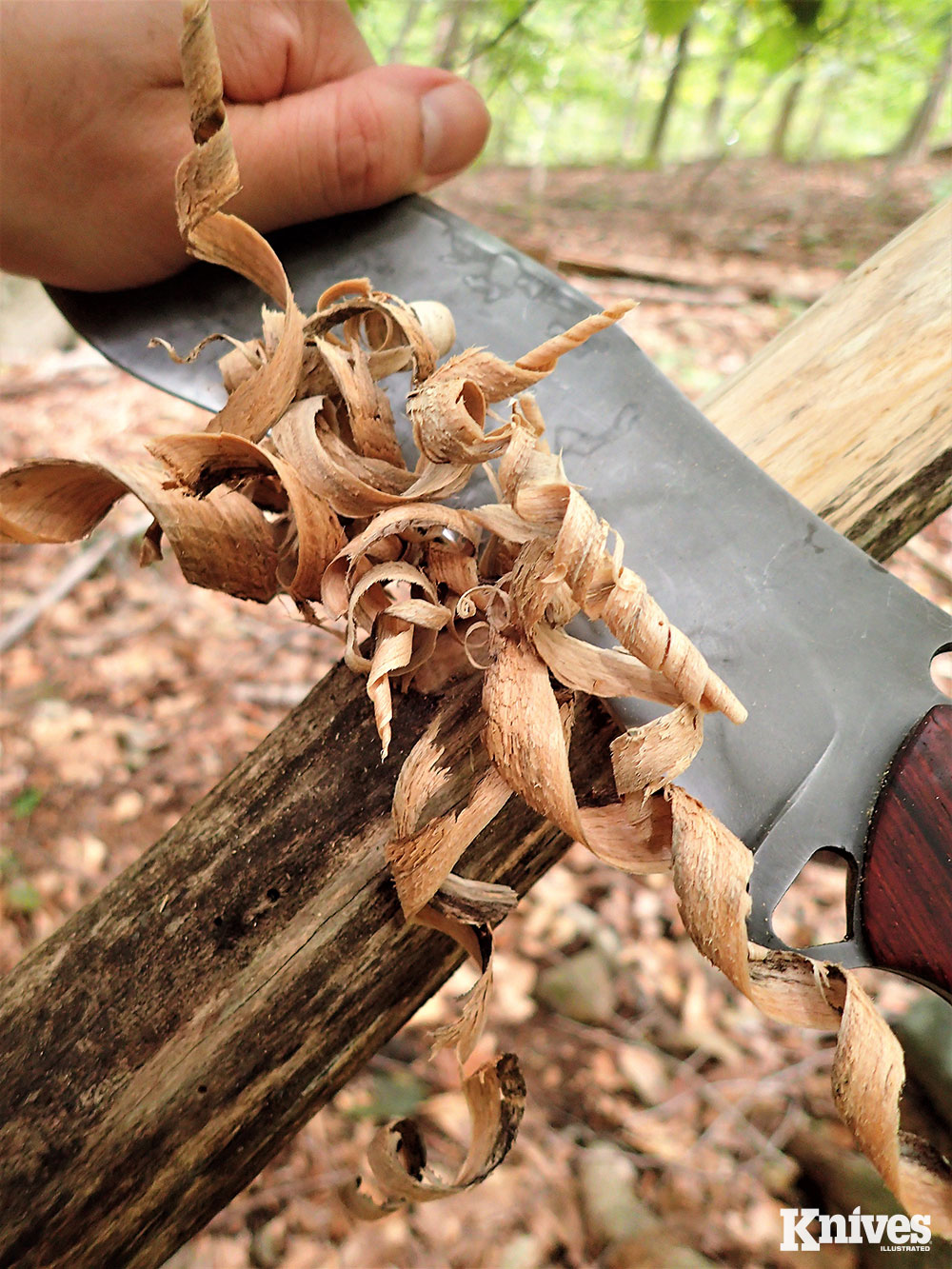 Used as a drawknife, the author shaved a hat full of kindling to replace small sticks for a fire. The recurve is what makes the curls happen.

The total length for this petite powerhouse is 7 inches, with a 3.5-inch blade. Usually, Ryan offers this knife with a 3/16-inch-thick blade, however, mine was 1/8-inch thick. I was okay with that. Ryan went with cocobolo for the scales, which contrast nicely with the blade.

Let’s face it: The Khuk Fighter is a chopper. One look at it will tell you it was meant for wreaking havoc on wood, splitting, and chopping. I wasted no time using the Khuk Fighter on finger- to broomstick-thick pieces of green witch-hazel for making a swamp grill. A swamp grill is often used in a jungle environment where the construction is the same as making a swamp bed, but on a smaller scale. 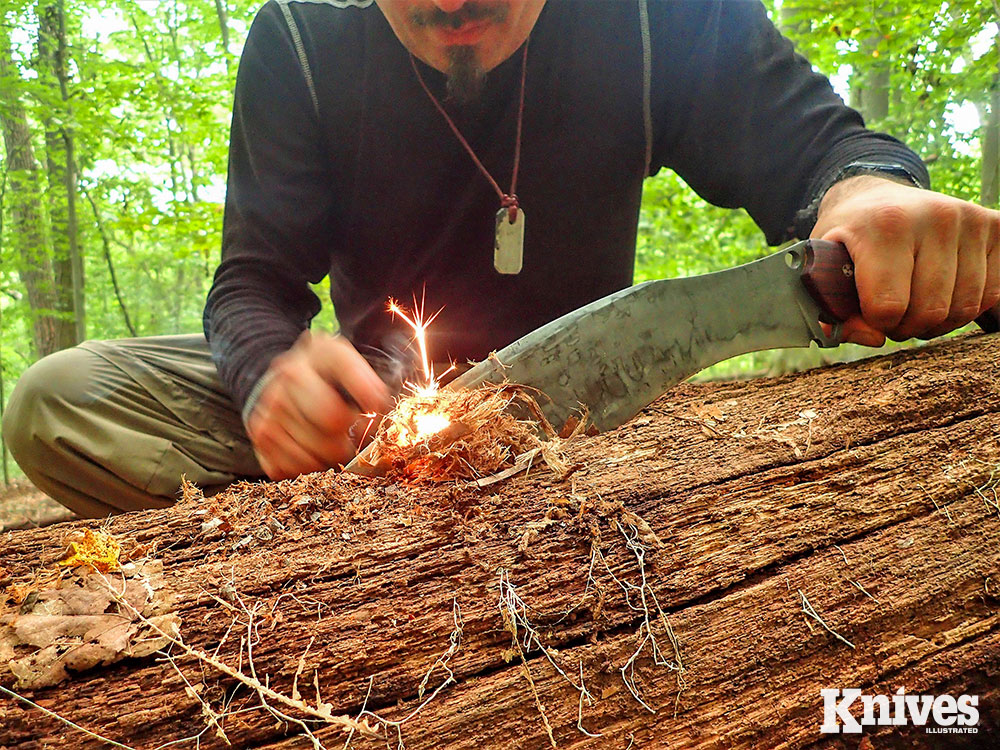 The false edge was sharp enough to produce sparks from a Ferro rod. The author raked the rod against the surface with tinder placed behind the blade to catch the shower of sparks for ignition.

I started with four broomstick-thick Y-pieces, each about 16 inches long. The Khuk Fighter lopped off the branches in one to two chops, using the sweet spot of the giant blade. When it came to the Y-forks, I found that the area closer to the tip (past the sweet spot) was perfect for the thinner parts. The angle of the hand was very comfortable due to the angle of the Khuk Fighter blade. The front portion is very “whippy” due to the taper of the blade and the 3/16-inch thickness. When the knife is stuck in a wood surface, it can serve as a bark scraper for poplar or peel any stick. The author found it best to hold the knife handle for support while using the other hand to scrape wood against the spine.

Next, I cut several pinky finger-thick pieces from the same branch that would serve as the grill. Two cross pieces about thumb thickness were also cut to hold the grill pieces. One final, broomstick-thick straight piece was cut and beveled at the top and chopped on the other end to make a chisel end for hammering into the ground with the side of the broad blade. This is a pilot stick meant to do the hard work, as the Y-forked pieces shouldn’t be hammered with a baton. 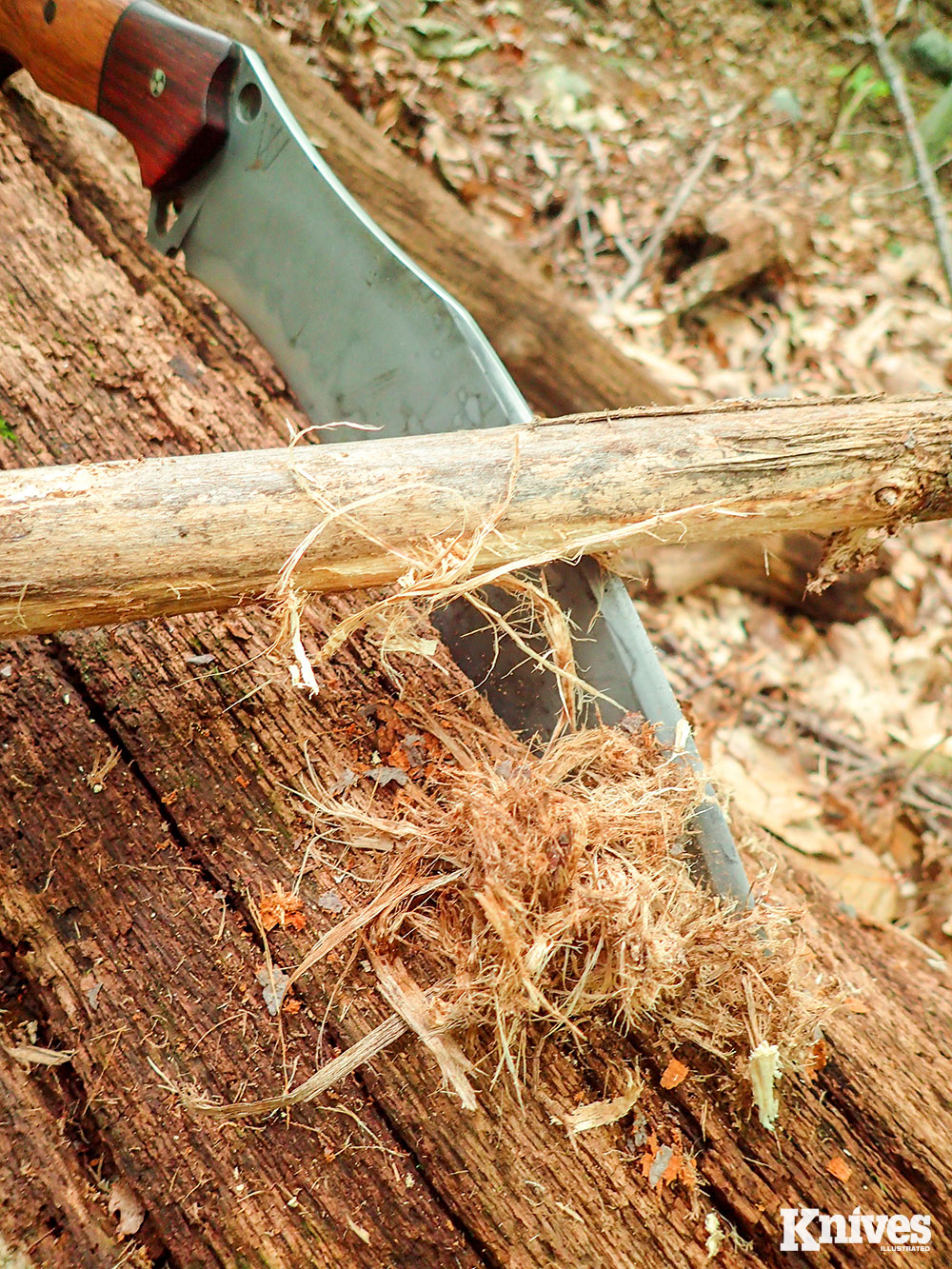 A common way to slice food with a khukuri knife in Nepal is to prop it against the body. The natural curve and weight keep the knife in place while the food is pushed down the blade for easy, controlled slicing.

The four Y-pieces were stuck in the holes made by the pilot stick and arranged like bedposts. The thumb-thick pieces were used as crossbars on either end, while the pinky-thick pieces were added to the top of the crossbars. Grill done. The handle was comfortable, and the balance was on point. The blade floated through the green branches like a lightsaber, but these were green and thin. 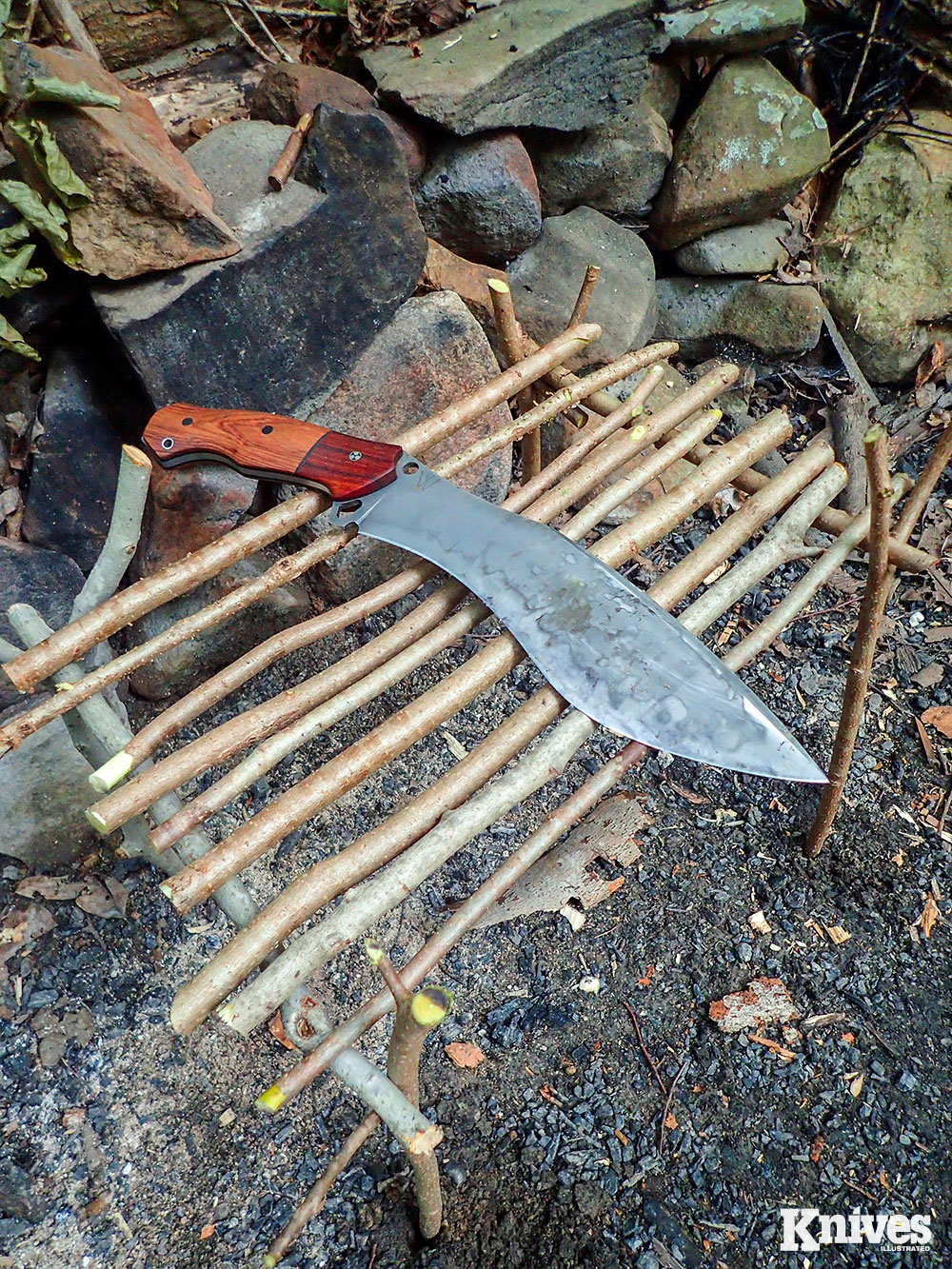 A swamp grill was made utilizing the same design principles as a swamp bed usually made in the jungle. The 3/16-inch thick blade tapers nicely to aid in chopping thin, green branches towards the tip.

Firecraft was next. The Khuk Fighter was used to split small, saw-cut, short lengths of the bicep to calf-wide pieces of hard oak and maple. I did this with a large beater stick to aid in the split for control and accuracy. There were no issues splitting the tough wood, and when it came to knots, I hammered through it—literally. 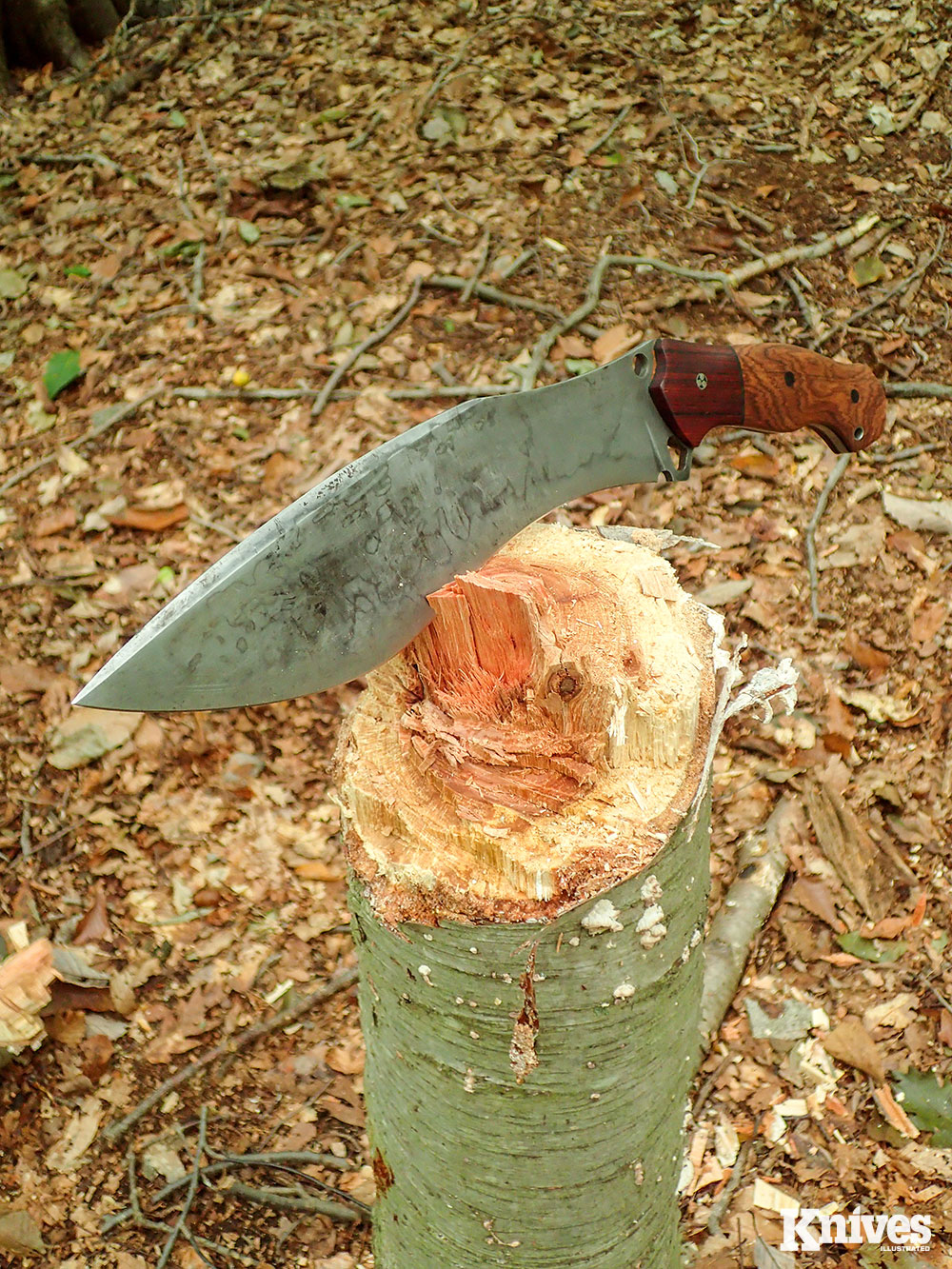 The Khuk Fighter chopped this dead 6-inch-diameter beech tree down in a few minutes. The knife performed like a hatchet, which is what a khukuri-style knife is meant to do.

Fuel for the woodstove was out of that wood, but nonstop, pounding thunderstorms left dead twigs and poplar bark drenched. Kindling and tinder had to be made with the Khuk Fighter. Some of the maple/oak fuel chunks were split thinner to resemble pencil-thick sticks with the tip of the Khuk Fighter in an icepick-grip. However, the actual kindling came from using a downed maple log perfectly leaning at a 45-degree angle. 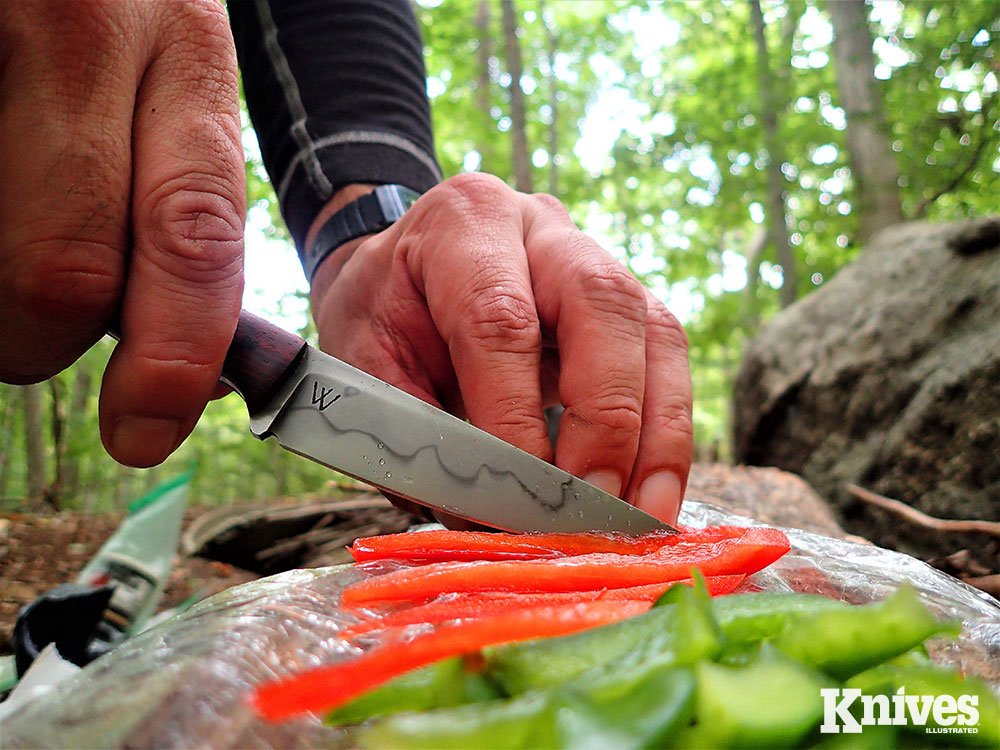 Slicing veggies with the Norfolk was a breeze and a welcomed break from the Goliath Khuk Fighter. A patina started to form, adding to the protection of the blade.

I used the Khuk Fighter like a drawknife, gripping the handle and the widest part of the spine, then placing the area of the blade just where the cutting edge starts on the wood. In a slow, consistent motion, I drew the knife towards me, slightly changing the angle to make sure the curved portion gets a chance to create curls. This can be done with any long blade, but not quite like a khukuri due to the curve. 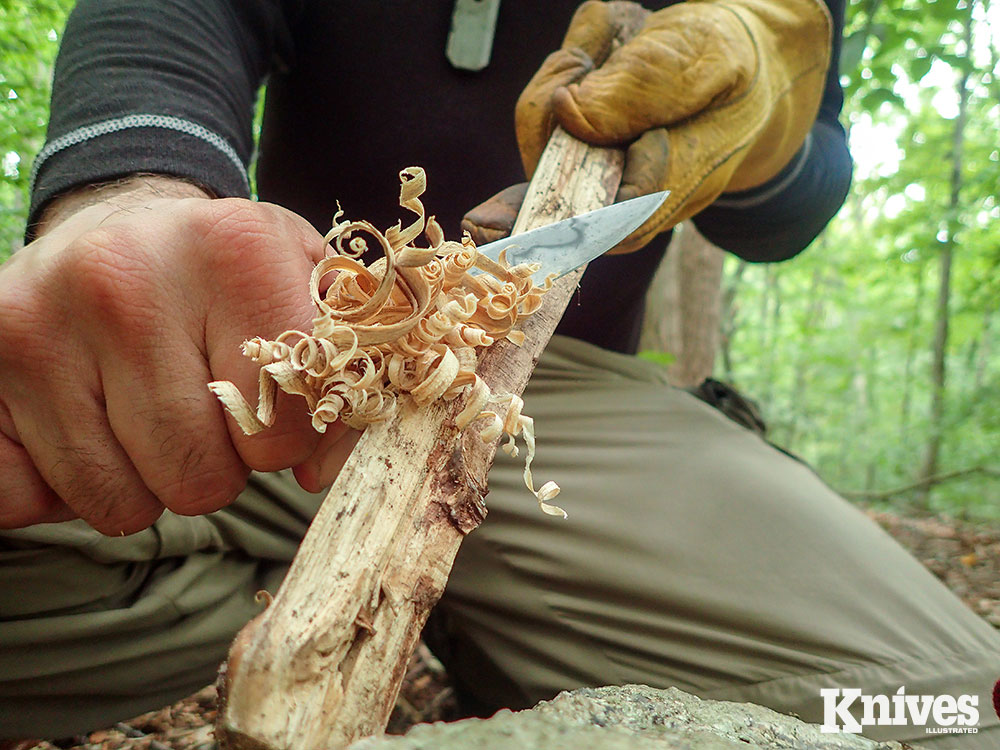 Making tinder from dead poplar was effortless with the Norfolk. It was just like using a small bushcraft knife, light and easy to maneuver in hand.

I quickly filled a hat with these shavings that were my thin stick replacement. Tinder was next. I poked the tip of the Khuk Fighter into a dead beech trunk and held it at a 45-degree angle. I then drew sticks back against the curved portion of the blade to make thin, curly feathers. They needed to stay on the stick as the ground was soaked.

A bit of skill is required for keeping the feathers on the stick. I used the sharp false edge to get sparks from my ferro rod by stabbing the tip into a wooden surface using an icepick grip. I held the handle securely as I ripped the ferro rod back against the false edge creating a shower of sparks, thus igniting the feather sticks.

The Khuk Fighter is meant to chop, so I started on a forearm-thick piece of wild strangler vine in the woods. This wasn’t a problem for the knife on these monsters, and I may have even saved a tree or two from their clutches. I continued to chop wrist-thick pieces of dead oak and maple wood blown down from storms. Here is an authentic karda from Nepal (right) next to the Ryan W. Norfolk (left). The karda is usually a three-finger-grip utility knife, while Ryan made sure his version had a full grip.

If I can control it, I hold the wood out to the left side and chop at an angle rotating the wood every strike to weaken it until it snaps. This is an excellent skill as the blade weight, in addition to the chopping, are both factors. The actual chopping came when removing a thick beech from my camp that was half blown over from a storm. I estimated the girth to be 6 inches.

While this was hard work, the Khuk Fighter reigned victoriously. The blade wasn’t damaged in any way. My hand didn’t suffer from the exertion either. I found I could choke back a little farther past the handle for extra leverage without any discomfort, which can’t be done on a traditional khukuri due to the sharp triangular point on their handles. Quick utility jobs like making a handle for a frying pan were easily done with this small carver. The Norfolk was the consum