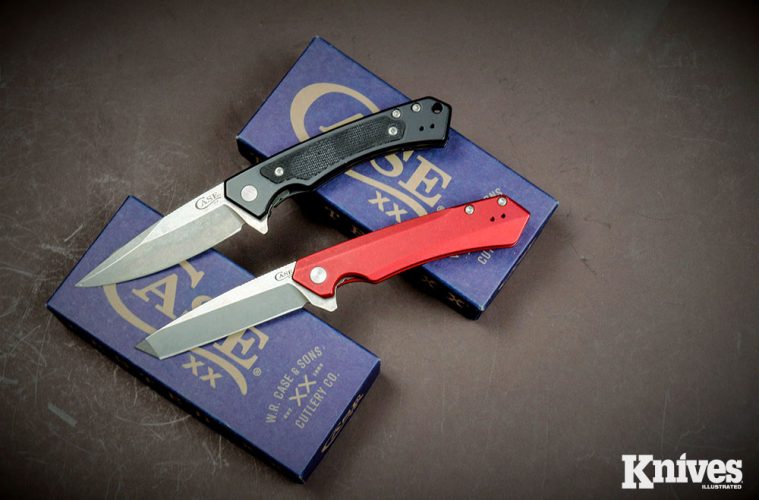 THE MARILLA AND KINZUA EDC FOLDERS FROM W.R. CASE & SONS ARE A LOCK TO BE A HIT

A new tradition has begun at W.R. Case & Sons Cutlery. The storied American company has decided to ante up in the competitive game of modern everyday carry (EDC) knives with two new models: the Marilla and the Kinzua. My first impression is that they’re holding a winning hand.

I’ve carried and used Case knives for many years. Other than several fixed-blade hunting knives, the models I own—and there are many—fall into the category of traditional folders.

“Traditional” in the knife world usually denotes folding knives with slip-joint, non-locking blades. They’re often included in a category known as gentlemen’s knives. Wouldn’t it be nice if being a gentleman or a lady was a prerequisite if you’re going to carry one? 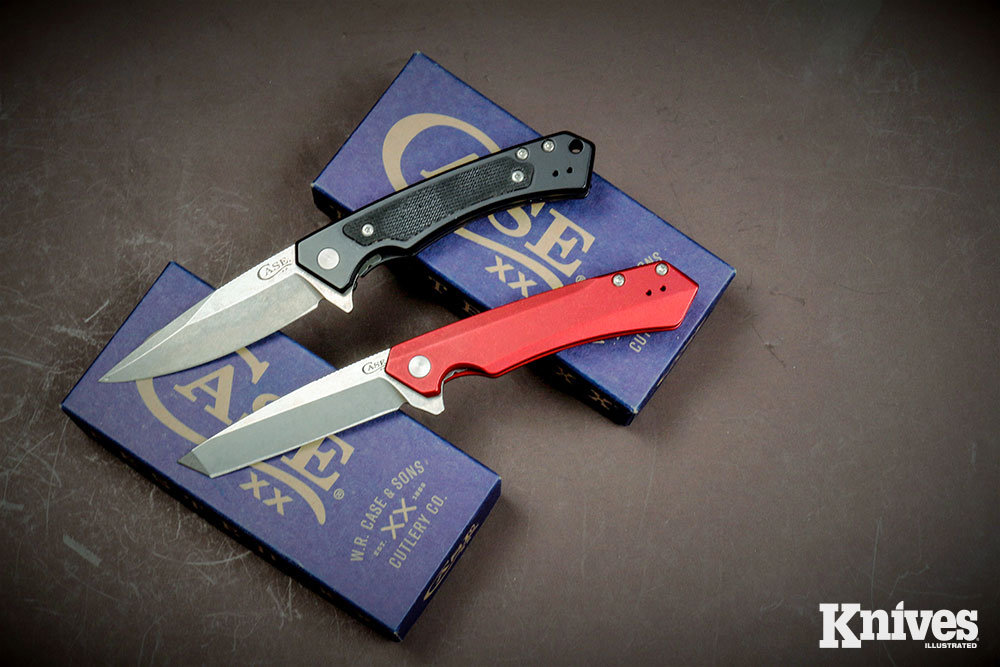 Case has done these to perfection from more than 130 years. Collectors hoard them. Others, who appreciate quality, American-made knives, many with a touch of jigged bone elegance, carry them to work and play every day. Case dominates that market. It’s in its comfort zone. It’s what it does best.

Of course, Case has made other types of knives over the years. The company has a history of producing fixed-blade knives for sportsmen—hunters and fishermen who create decades of memories afield with their knives and then pass them on to the next generation of family members. And Case has an ongoing collaboration with Winkler Knives to offer a series of rugged blades with a strong military influence.

But for everyday carry, many of today’s knife buyers insist on knives with blades that lock. Never mind that for most of us, we can accomplish most of what we actually use a knife for without a blade that locks. Case has a number of knife models with locking blades; the Trapperlock and Copperlock are a couple of my favorites. 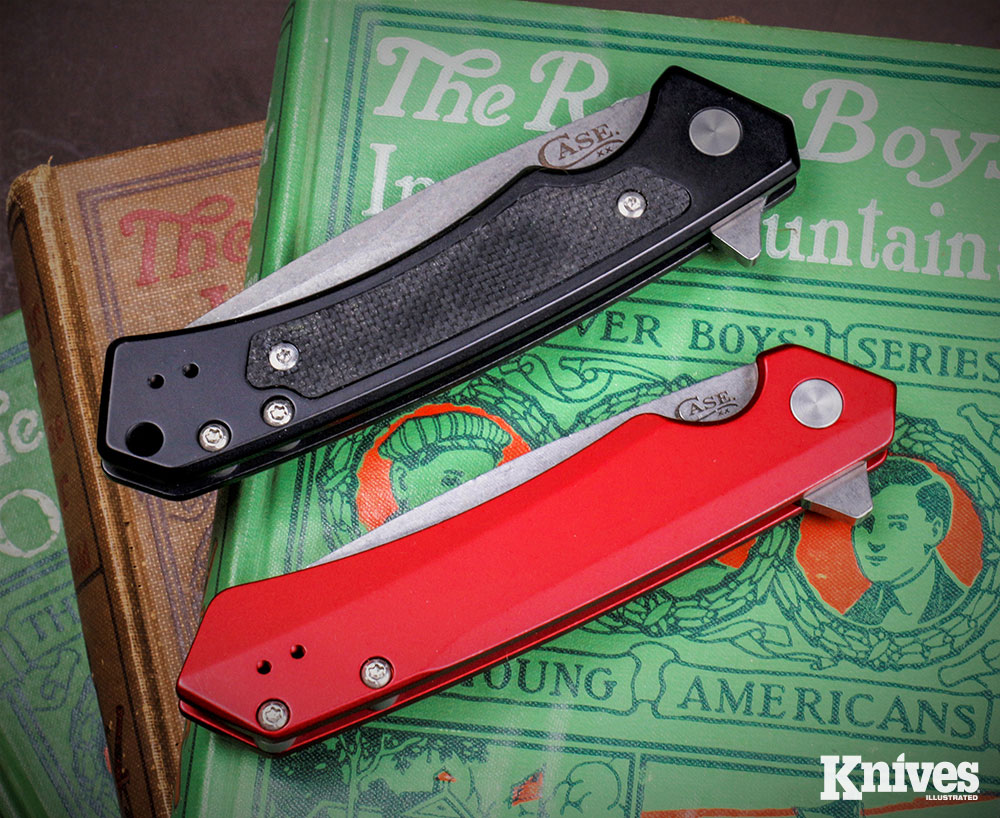 The Marilla (top) and Kinzua measure 4.75 inches closed. But thanks to their aluminum handles, they are quite light to carry at 3.6 and 3.4 ounces, respectively.

With the Marilla and Kinzua, however, Case now has two modern entries in the market of mid-sized to large EDC folders with locking blades and fast one-handed opening.

This new chapter in the Case story begins with the Marilla, named after the Marilla Brook in the vicinity of the company’s Bradford, Pennsylvania, manufacturing facility. It features a 3.4-inch drop-point blade of S35VN stainless steel with a satiny, stonewashed finish. The blade opens smoothly along its ball-bearing pivot by way of a flipper on the tang. A simple frame lock secures the open blade in place with sufficient engagement.

The handle is anodized aluminum. It’s no frills, but no problems either. On one side, there’s a black G10 inlay bolted into the handle to provide some gripping texture. There is a pronounced finger groove that works with the flipper tab when the blade is open to act as a guard to keep your hand from moving forward toward the blade.

These new Case folders use a simple frame lock with sufficient engagement with the blade tang to be very secure. While the frame is aluminum, there is a steel insert that engages with the tang.

The Marilla is available with handles in black, red, or blue. This is an open-frame design. Two spacers separate the handle halves. This type of design keeps lint and other debris from accumulating in the knife, jamming the mechanism, or absorbing moisture and causing corrosion. A metal pocket clip is reversible for either right- or left-handed tip-up carry.

There is jimping on the flipper and on the spine of the blade. I really like the blade configuration. The blade is a beefy 0.149-inch thick according to my calipers, but its width is a sleek 1 inch even at its widest mark, which I prefer over very wide, stubby blades. There’s a swedge on the spine tapering to the tip. And the point doesn’t drop beyond the centerline of the knife. These things contribute to a pointy blade shape that should be a good penetrator without being prone to breakage.

The Marilla’s sleek drop-point blade with swedge on the spine gives the knife a pointy profile and it should be a good penetrator.

I found the handle shape to be well configured too. The knife was comfortable to use as I tried it on a number of routine chores around the house, opening packages, cutting tags off clothing, and a bit of food prep. The blade was sharp when I received it and it performed well. The knife weighs 3.6 ounces and carries well for a knife with an overall closed length of 4.75 inches.

I’m not the only one impressed with the Marilla. This past spring, the Marilla took home the Blade Show’s award for the best American-made knife of the year.

The Kinzua is named for a scenic stretch of forest in the Allegheny region. It too features a 3.4-inch stonewashed blade of S35VN steel. But the blade is a tanto in configuration, with a distinct secondary edge angling up to the tip. Like the Marilla, the Kinzua has a thick, 0.149-inch blade. And that thickness begins to taper only a quarter inch from the tip, providing a very sturdy point not likely to break, while still being a decent penetrator.

The Marilla felt very good in the hand to the author, important if you are going to control the knife well through a range of tasks.

Like the Marilla, it uses a frame lock and offers one-handed opening with a flipper. Its anodized aluminum handle also has a useful finger groove, but the handle overall is shaped slightly differently, especially at the butt end. And the handle is completely smooth; there is no textured G10 inlay. I usually like some texturing on a knife handle, but I had no issues when taking a grip on the Kinzua.

The Kinzua too felt good in the hand. I know that’s a very subjective thing, which is why it pays to try before you buy whenever possible. Sometimes we tend to relegate tanto-style blades into the realm of knives strictly for defensive use.

The Kinzua certainly could fill that role. It’s a simple, sturdy design that opens fast, has a good blade length at 3.4 inches and has zero blade wobble. But I’ve found this tanto style—and this is particularly true with the Kinzua—to be a very good general purpose knife. 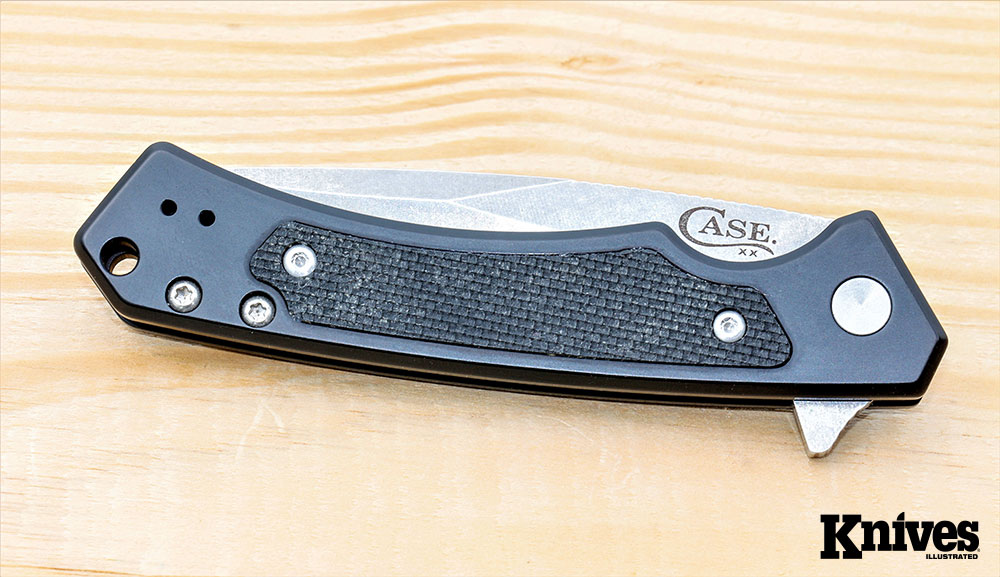 The Marilla features a textured G10 inlay on one side of the handle to enhance its gripping attributes.

The corner, so to speak, where the two edges meet is excellent for opening boxes. And the angled edge is useful if you’re at the full extent of your reach and need to make a cut, such as when you’re field dressing a big game animal. It’s also handy when I’m under my rusty old car in a rainstorm trying to reach far enough to

cut the rubber hanger that’s the only thing left holding my muffler and exhaust pipe that are dragging on the pavement. That’s just one reason—number 947, I think—on why I always carry a knife.

I’m looking forward to more such EDC offerings from Case in the future, not that I’m ever going to give up my amber jigged bone Barlow or my Navy-blue bone three-blade Stockman. Case has made a great start with these modern folders. The Marilla and Kinzua are competitively priced for American-made EDC knives of this quality. The suggested prices are $179.99 and $159.99, respectively, with real world prices bound to be a bit lower.

They might not have the same elegance as the company’s slip-joint folders. But there’s beauty too in simplicity, in rugged construction and in purposeful design.

The Marilla and Kinzua have these things, along with the confidence-inspiring feel that these blades can handle anything you need them to do. And isn’t that what everyday carry is all about? KI

The Kinzua features a narrow tanto-style blade that tapers to a point only at the last quarter inch, making it a very rugged design. 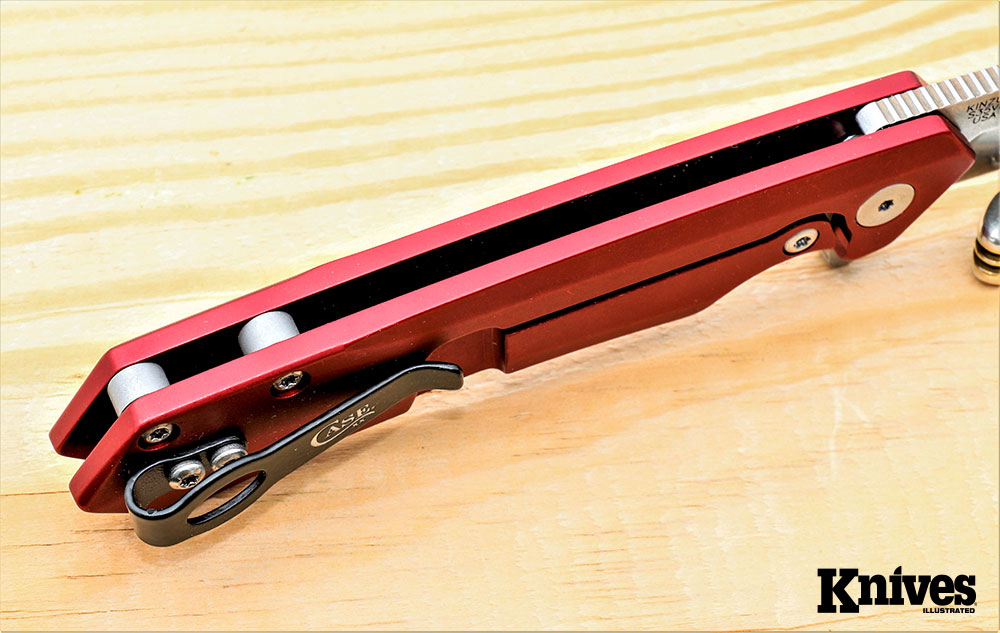 The Kinzua (shown) and Marilla both feature an open design with the two handle halves separated by two spacers. 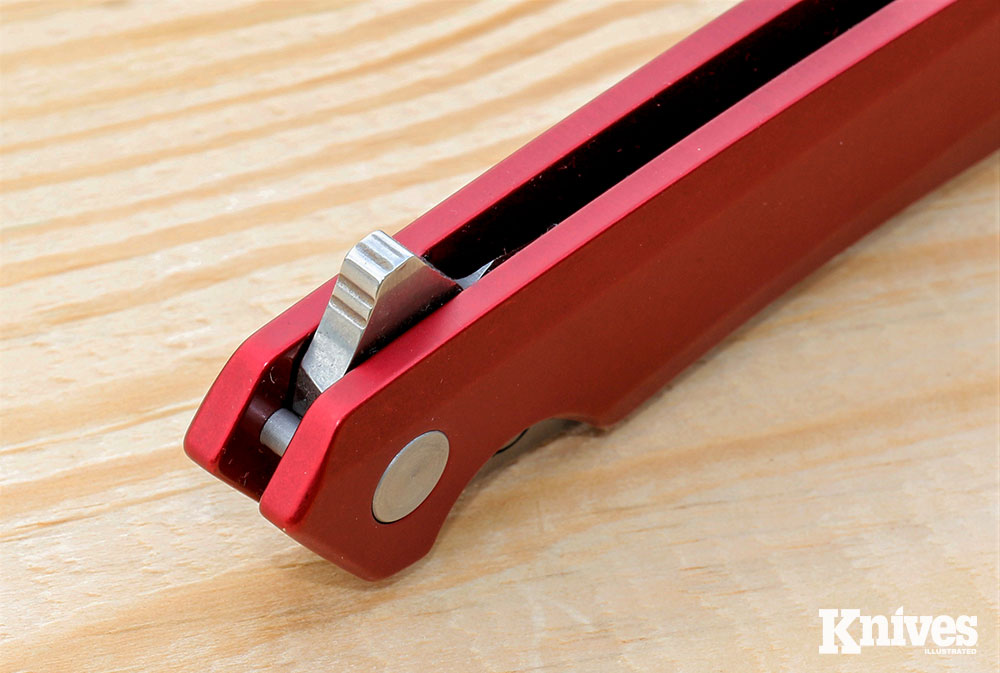 The Kinzua (shown) and Marilla open easily one-handed courtesy of a ball-bearing pivot and a flipper on the tang. 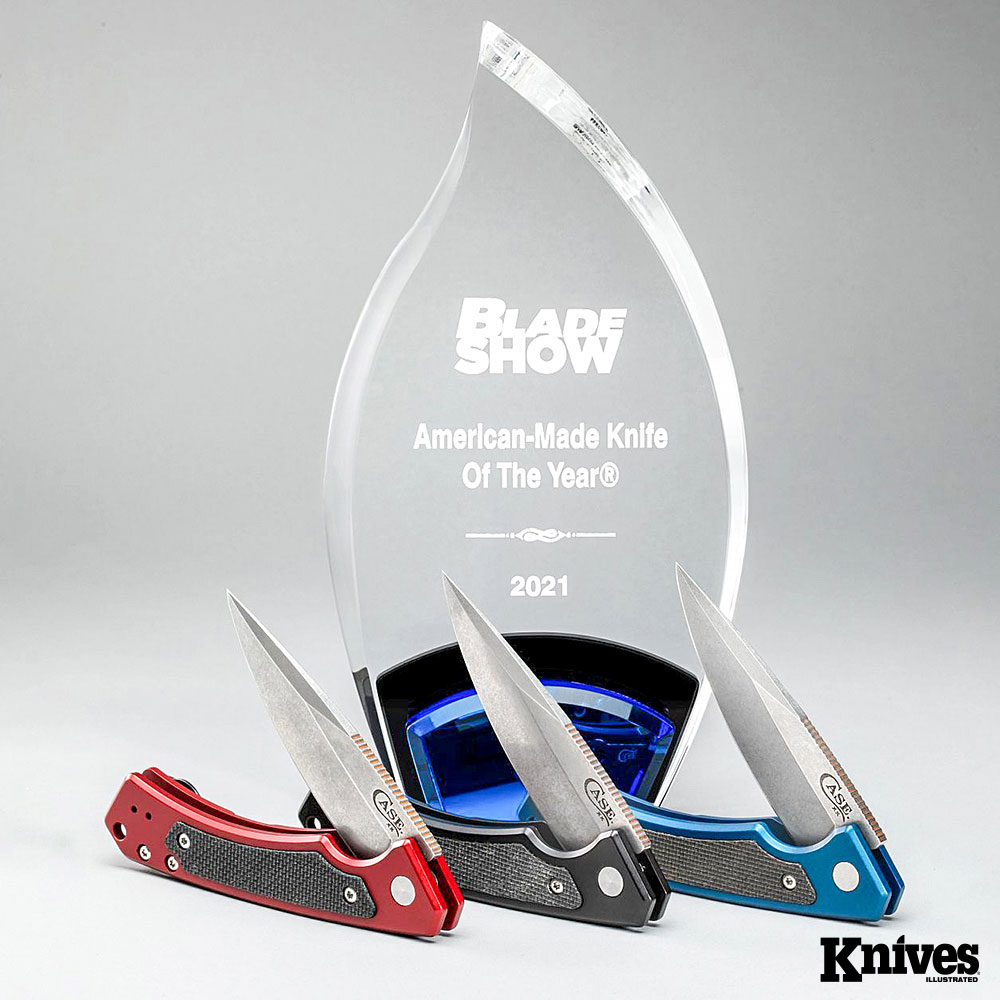 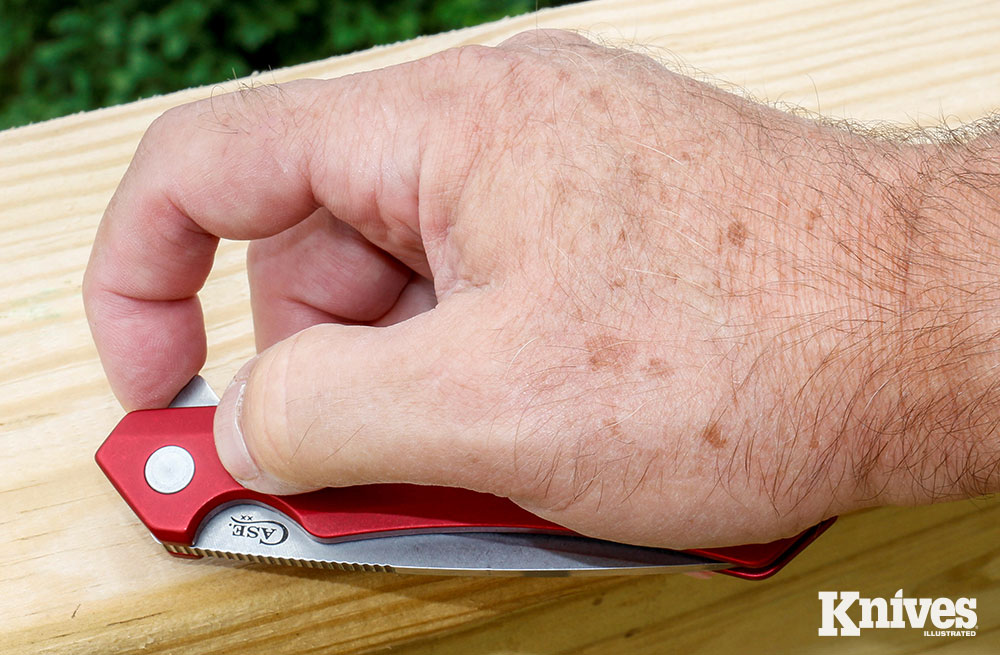 Opening either the Kinzua (shown) or the Marilla takes just a flick of the index finger. It makes for easy one-handed opening with either hand. 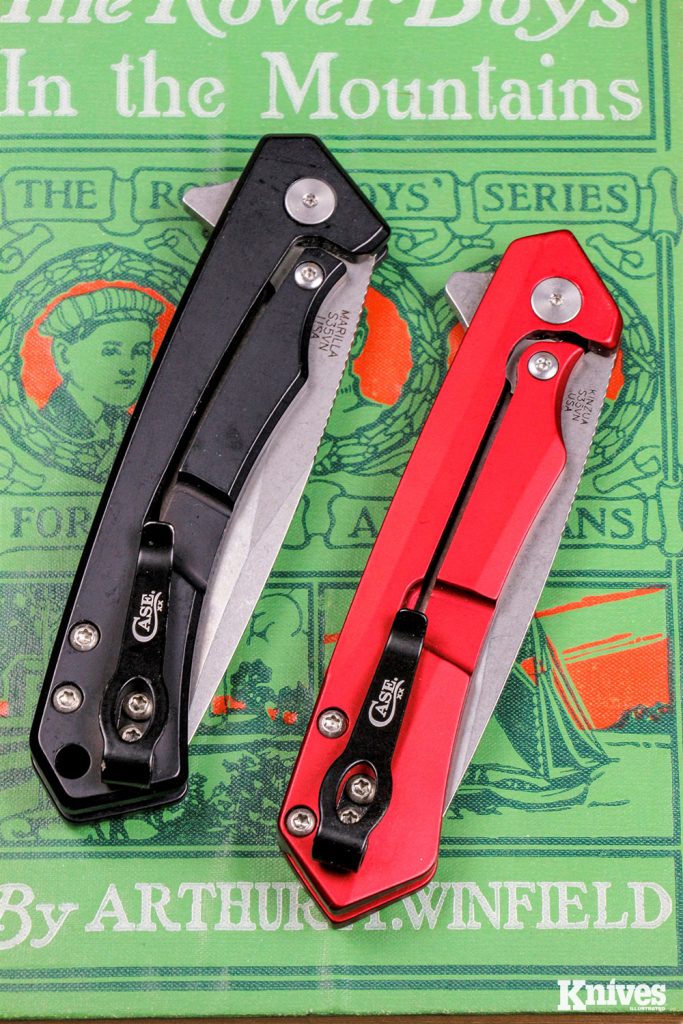 These new Case knives each come with a metal clip that’s reversible for tip-up carry. 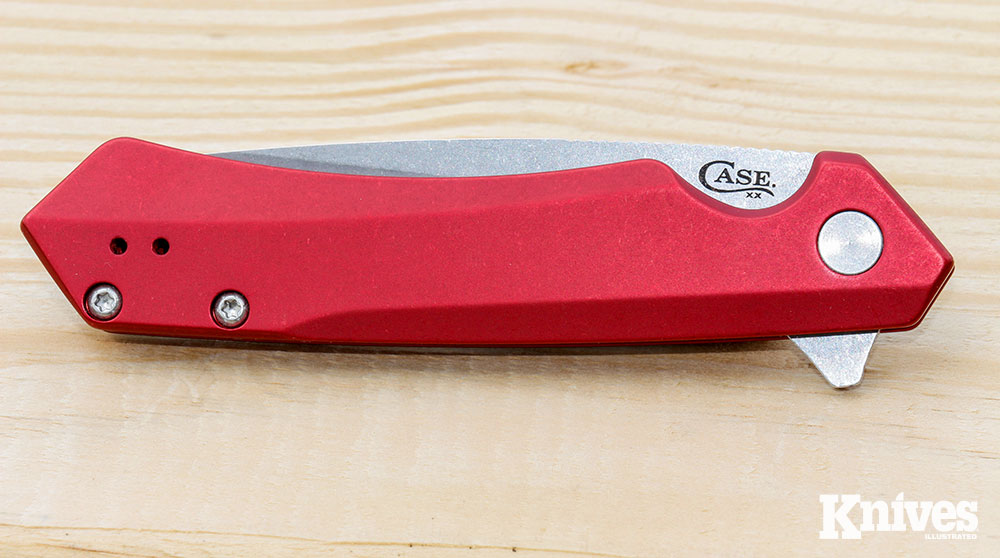 The anodized aluminum handle of the Kinzua is smooth. However, with its prominent finger groove and general handle shape, getting a secure grip on the knife was no problem. 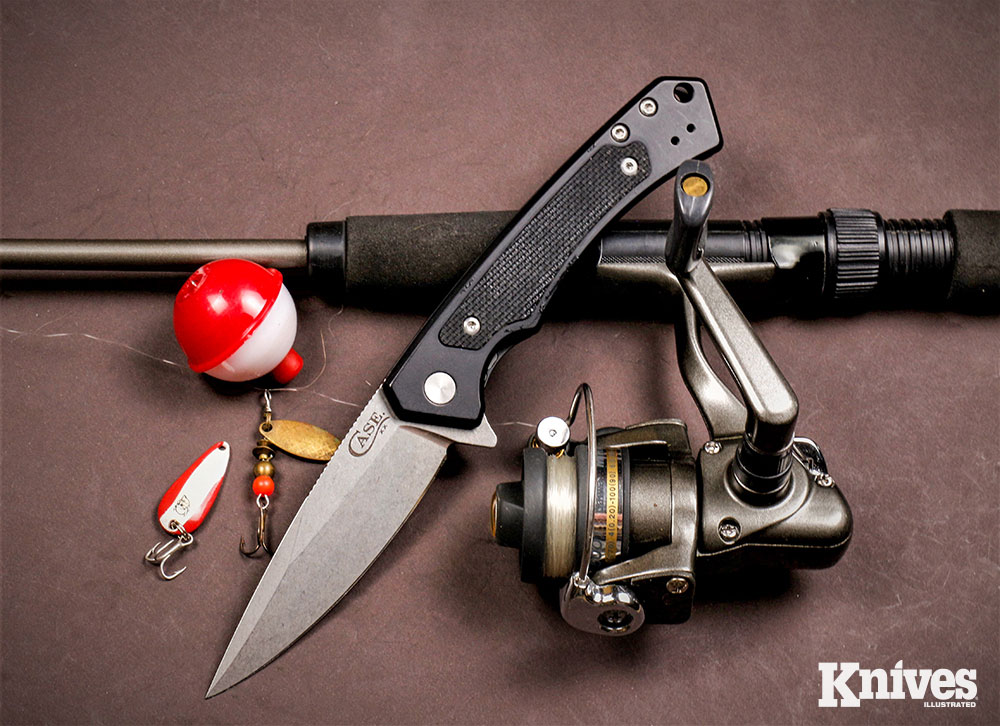 The new Case folders are suitable for a wide range of EDC tasks in both urban and backcountry environments.