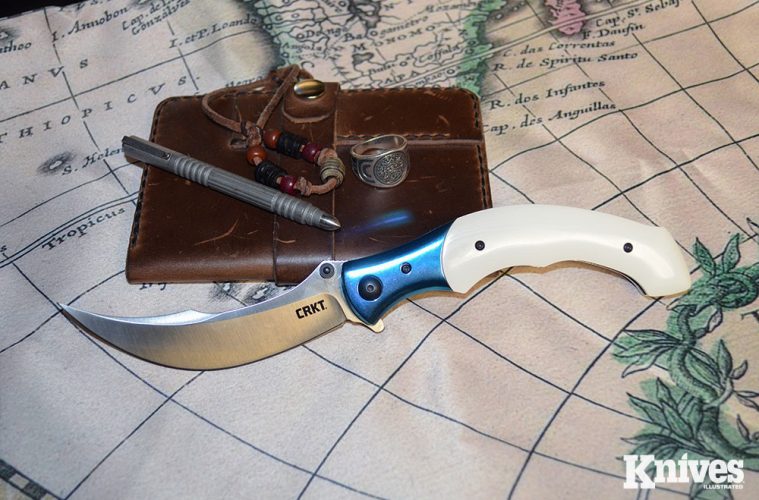 PERSIAN-INSPIRED EXCELLENCE WITH THE CRKT RITUAL

I know I’m dating myself by saying this, but I grew up watching Ray Harryhausen’s amazing stop-motion animation on films such as “Jason and the Argonauts,” “The Golden Voyage of Sinbad,” and “Clash of the Titans.”

Tell you what: If I ever did have to face an angry mob of skeletons and the classic scimitar wasn’t available, the CRKT Ritual wouldn’t be a bad choice for armament. 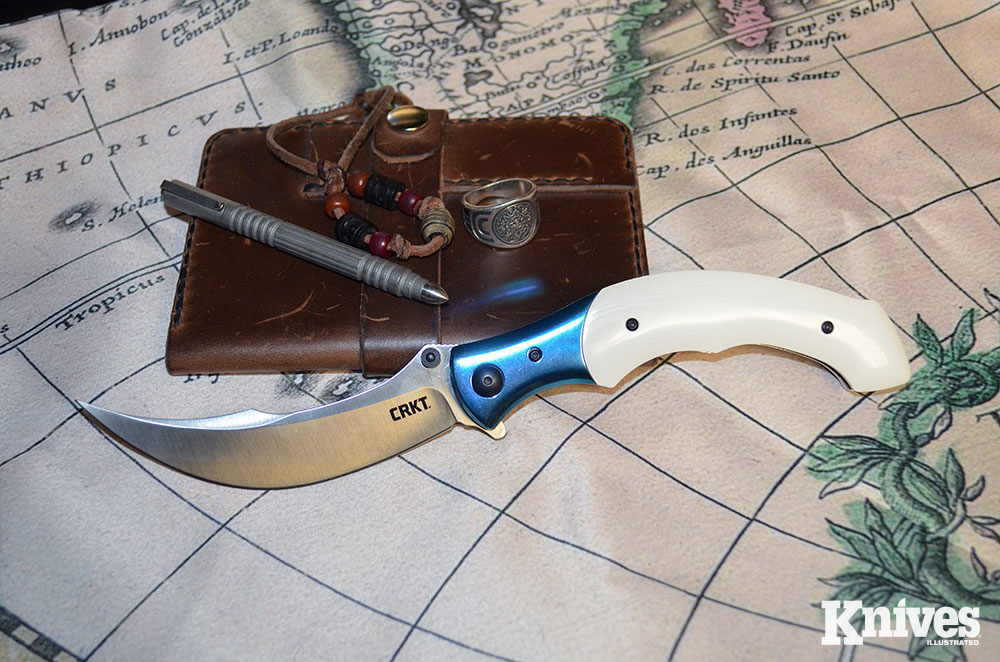 The CRKT Ritual is a rather big knife with a sweeping 4.37-inch blade.

From the moment you pick it up, the Ritual calls to mind riding horseback in the desert, chasing down a lamp that hides a djinn that will grant your wishes…for a price. This was one of the most highly anticipated 2021 releases from CRKT, and for good reason. Just look at it!

Make no mistake, this is a big knife. It is just a hair under 10 full inches when open. Closed, it is still about 5.5 inches long. It weighs in at 6.1 ounces, so while it isn’t a brick in the pocket, it does certainly have a little heft.

“The CRKT Ritual is the sort of knife that you carry for looks as much as you do for functionality. It will definitely turn heads no matter where you go.” 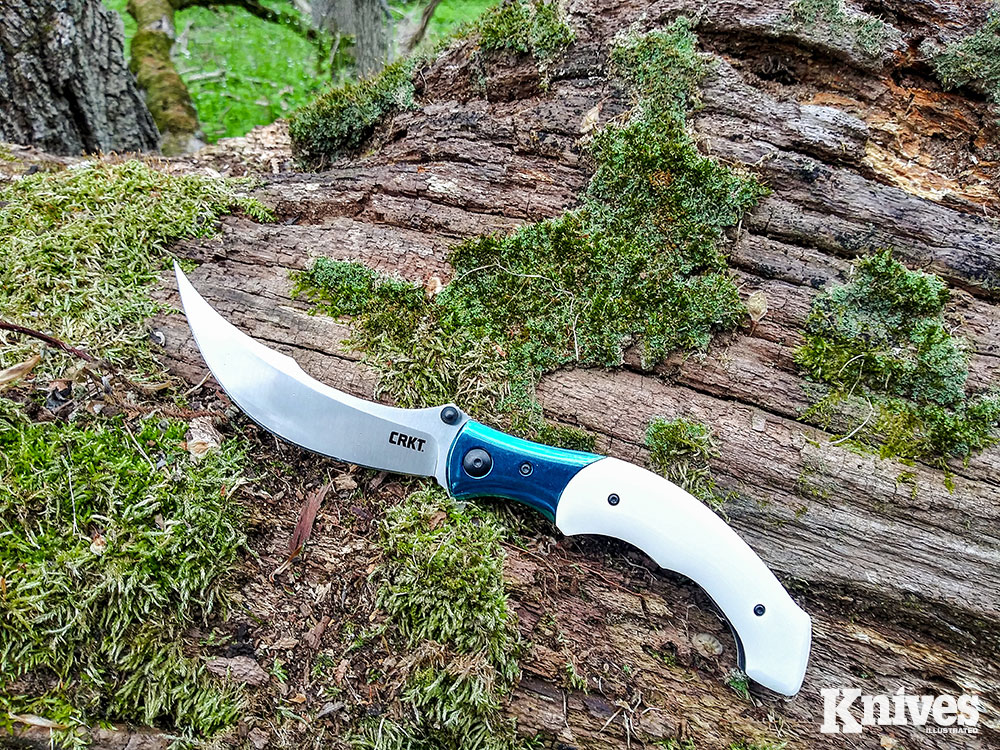 The CRKT Ritual is a very functional knife with a bit more style than your ordinary EDC folder.

The blade has a dramatic curve, one that matches the handle, terminating in a needle-sharp point. While the blade is 4.37 inches long, due to the curve the cutting edge is actually just shy of 5 inches. There is just a bit of jimping on the thumb rise part of the spine.

The knife’s liner lock is simple, yet secure. CRKT photo.

The handle is a really handsome combination of ivory Micarta with blue stainless-steel bolsters and black hardware. It is almost impossible to capture in photos, but the Micarta does have very slight texturing. There is a non-reversible pocket clip orienting the knife in a tip-up carry position in the pocket. 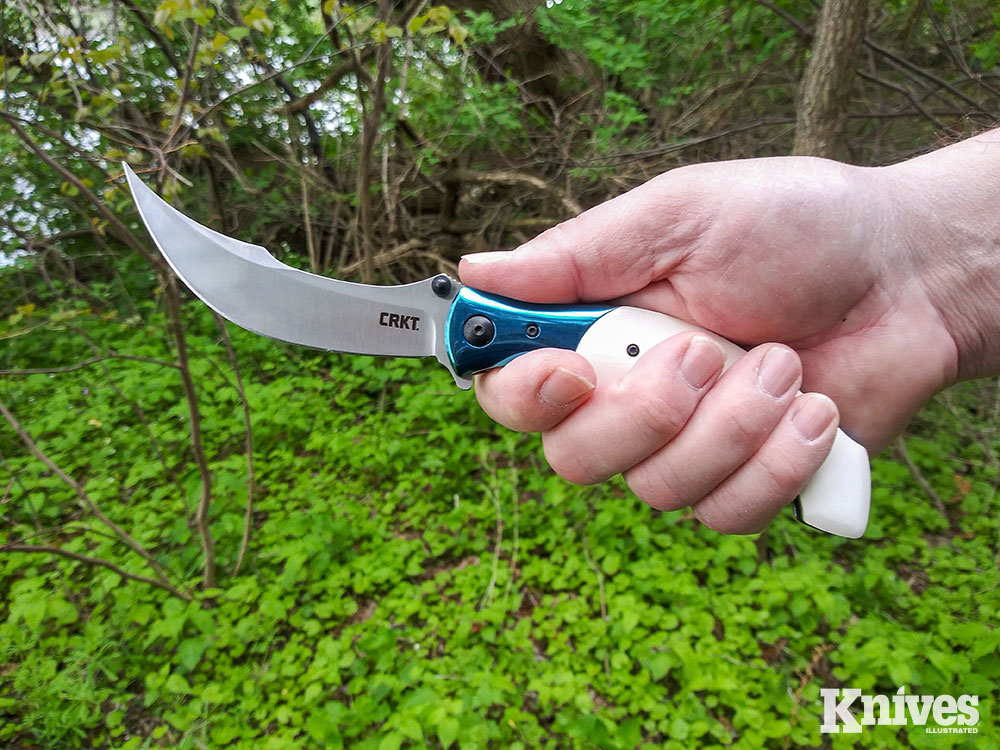 The Ritual fills even a large hand with real estate to spare on the handle.

Given the size of the blade, it makes sense that the Ritual is an assisted opening knife. It has an IKBS ball bearing pivot system that opens the knife smoothly. There is an ambidextrous thumb stud for those who prefer that style opening device over the standard flipper.

Either option deploys the blade lightning fast and it snaps into place with authority. A liner lock keeps it solidly in place until you’re ready to close it. There is absolutely no wiggle in the blade at all. 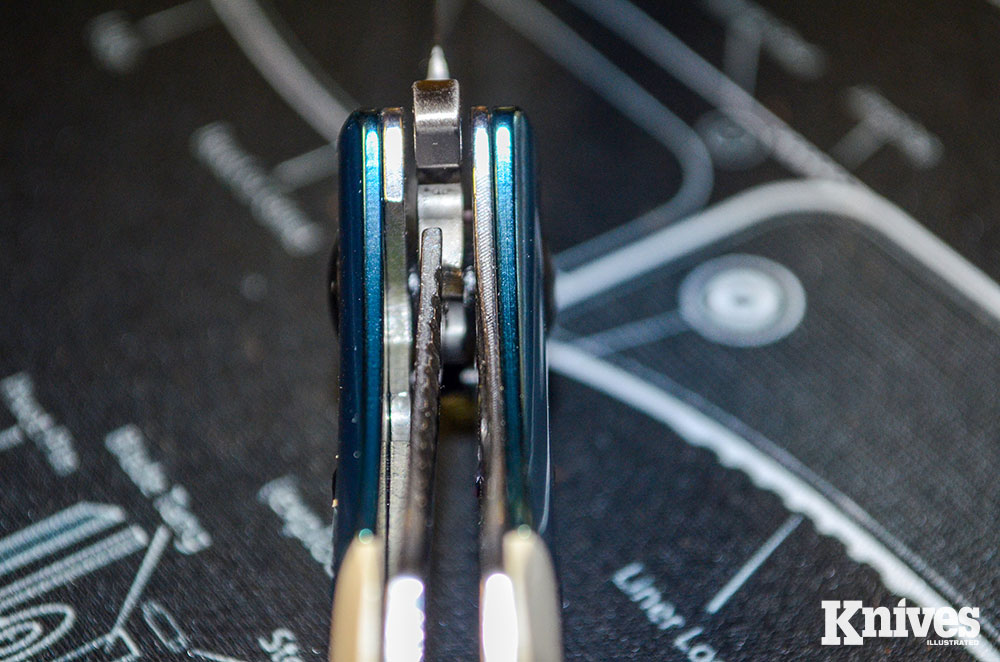 The liner lock is extremely secure. There is absolutely no wiggle in the blade whatsoever.

As I said, this is a big knife. I wear a L/XL size glove and often have trouble finding folding knives that offer no more than a three-finger grip for me. That’s not an issue with the Ritual, not in the least.

There is a bit of jimping on the blade spine, exactly where the thumb naturally wants to rest. 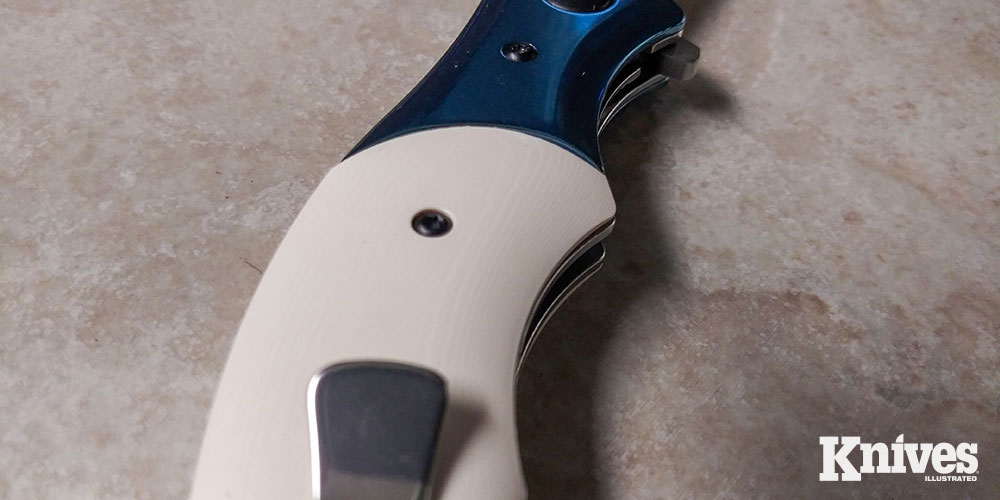 If you look closely, you can see the faint texturing on the ivory Micarta.

The edge arrived sharp, but not what I’d call “shaving sharp.” However, I make it a point to review a knife in the condition it arrives to me, without touching up the edge at all.

Lacking easy access to a cyclops, dragon, or a griffin, I had to come up with a few other decidedly more mundane tasks in order to get a feel for how the Ritual would handle. While I would have loved to tackle a mythological creature or two, you have to work with what you have available.

One of the most common chores where we reach for a knife is cutting cordage of some sort. For this review, I decided to use the last hank of sisal rope I had on hand. This is a rather abrasive material, more difficult to cut than, say, cotton clothesline. For the first couple of cuts, I looped the rope over the blade and sliced it easily.

This was not a surprise, given the amount of belly on the blade. Then, I tried some push cuts. These required a fair amount of rocking back and forth to completely sever the rope.

“…the Ritual fairly melts into my hand. The curve of the handle, combined with the contouring of it, give the knife incredibly comfortable ergonomics.” 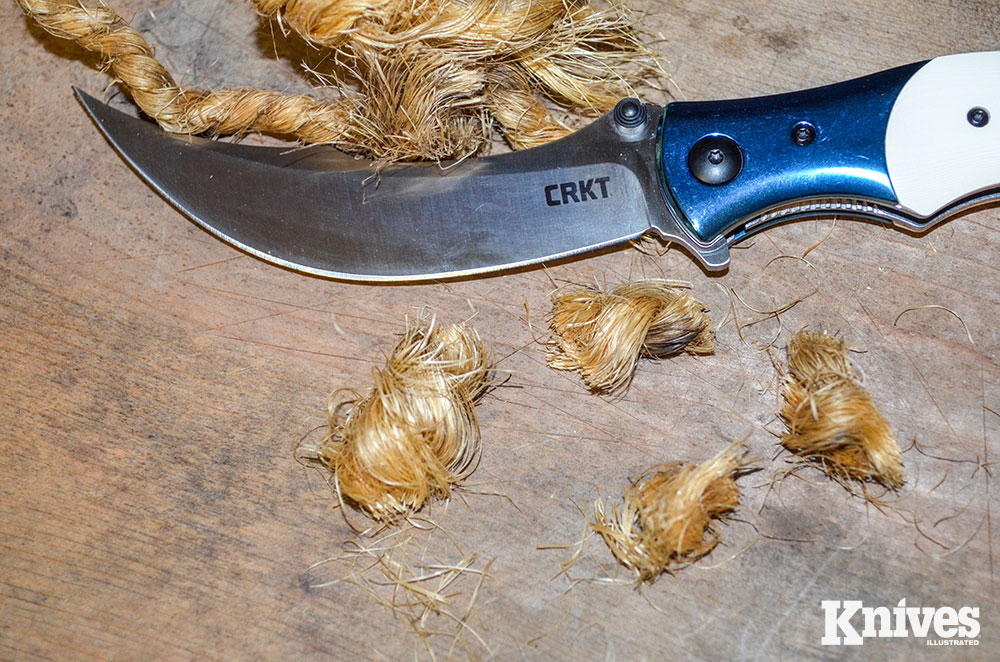 Sisal rope was no match for the slicing ability of the Ritual.

Let’s face it, the reality is that we use our knives to break down cardboard boxes far more often than we’ll ever use them to save the world, or even just one damsel in distress. This material is also terrible for the knife’s edge. The glue used in manufacturing corrugated cardboard dries extremely hard.

Plus, there’s invariably some amount of dust and grit that works its way into the material. All of this adds up to something that will quickly dull an edge. In this instance, the Ritual did fairly well. I sliced both with and against the “grain” of the cardboard.

Each cut was clean, and I didn’t have to repeat cuts to part the cardboard. However, I did feel I needed to press fairly hard with the slices, due to the performance on the sisal rope immediately prior. 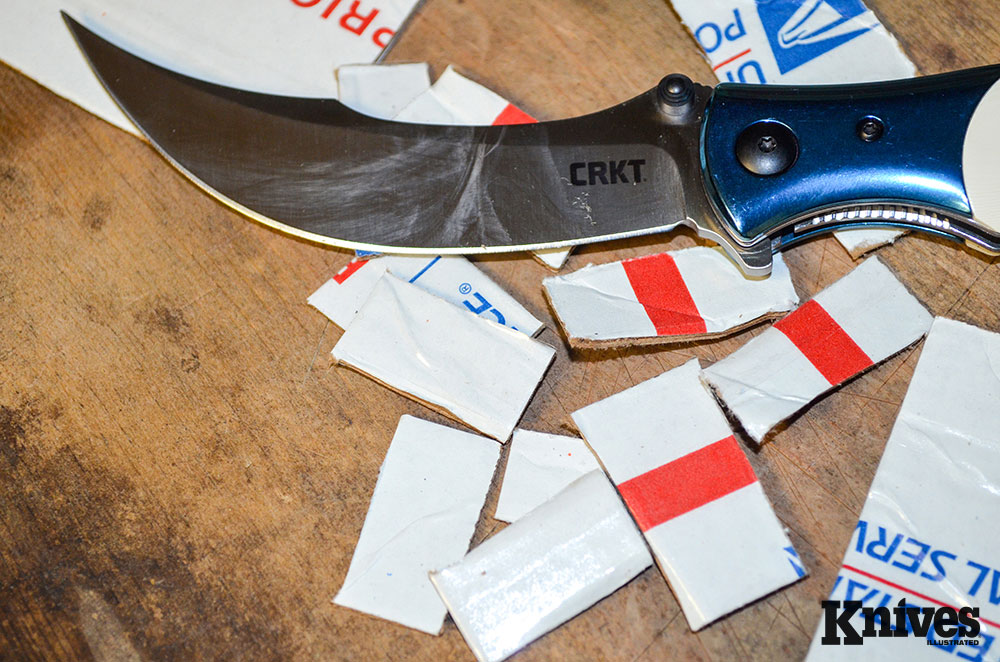 The Ritual was definitely up to the task of processing cardboard down into smaller pieces, both with and against the grain of the corrugation.

By this point, the blade was noticeably duller than when I’d started. Not ridiculously so, but definitely noticeable. I pick up old web belts at thrift stores from time to time for the sole purpose of using them to gauge a knife’s performance. I laid one out and began slicing pieces from it with the Ritual.

Despite all of the use so far, the blade’s edge did pretty well. Most of the cuts took two passes to get entirely through the material, but this wasn’t entirely unexpected. These belts are thick and tough. 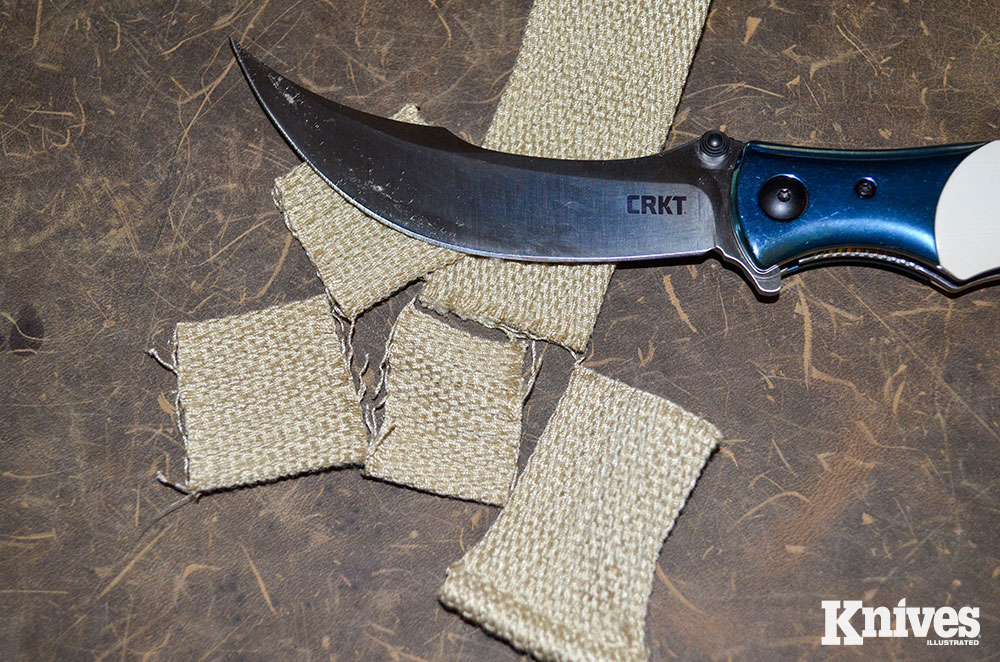 A webbed belt was a little tough on the Ritual, but with a couple of passes it did the job.

I wanted to see how the Ritual would do with some impromptu food prep. This isn’t at all the style of knife I’d normally choose for kitchen use, but I try to always give a knife a chance to surprise me. In this case, I grabbed a handful of radishes from the refrigerator.

The blade is thin, just 0.13 inch at the spine, so I figured it would do OK for this sort of chore, unlike a thicker, more bushcraft-style blade. I trimmed the radishes, then cut them into quarters. No problem at all, other than the knife felt slightly clumsy, with such a large blade performing a more delicate chore like this.

In a nutshell, if I had packed cheese and sausage for a picnic and this was the knife I had with me, I’d not struggle or be frustrated. But a smaller knife would obviously be handier for something like that. 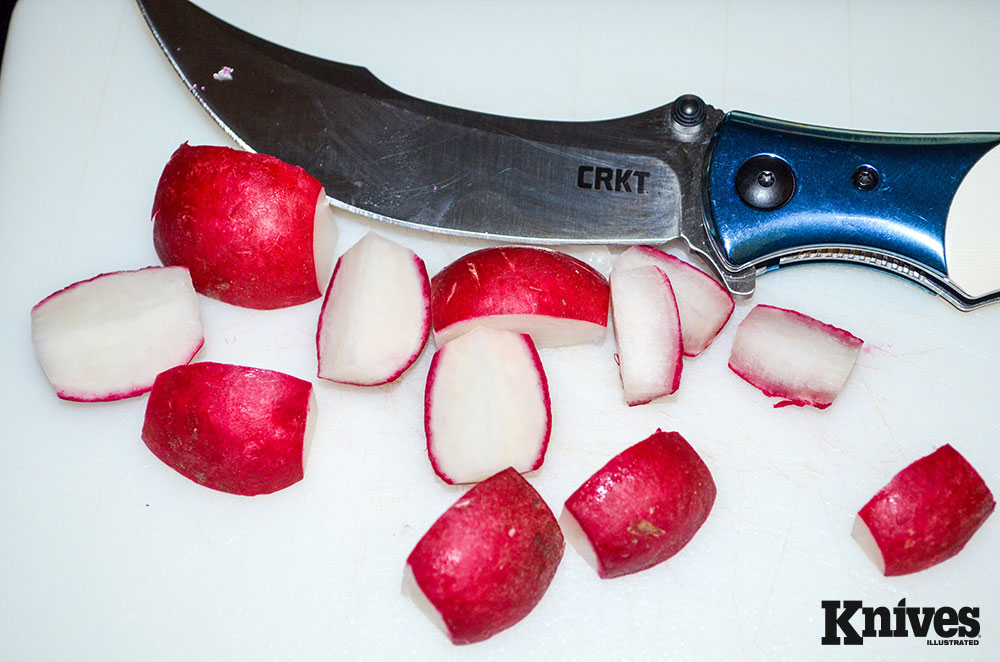 Food prep went fine with the Ritual, though the large blade was a little awkward for small chores such as this.

Now, the point of putting any knife through testing like that actually has little to do with whether the knife can actually cut the given material. With enough time, steel will always win over fabric, cordage, and such. Instead, the idea is to see how well the knife handles, how comfortable it is to use.

The CRKT Ritual is a large, curvy folder with an “Arabian Nights” vibe. CRKT photo.

Despite the size, the Ritual fairly melts into my hand. The curve of the handle, combined with the contouring of it, give the knife incredibly comfortable ergonomics. The pocket clip is flat enough that it doesn’t generate a hot spot in the palm.

The handle itself is long, obviously, but narrow enough that it doesn’t feel like your grip is overloaded. It is equally comfortable in an icepick grip with the blade edge facing out. Reversing it so the edge faces the wrist is workable but feels as though the hold on the knife is a little weak in this position. 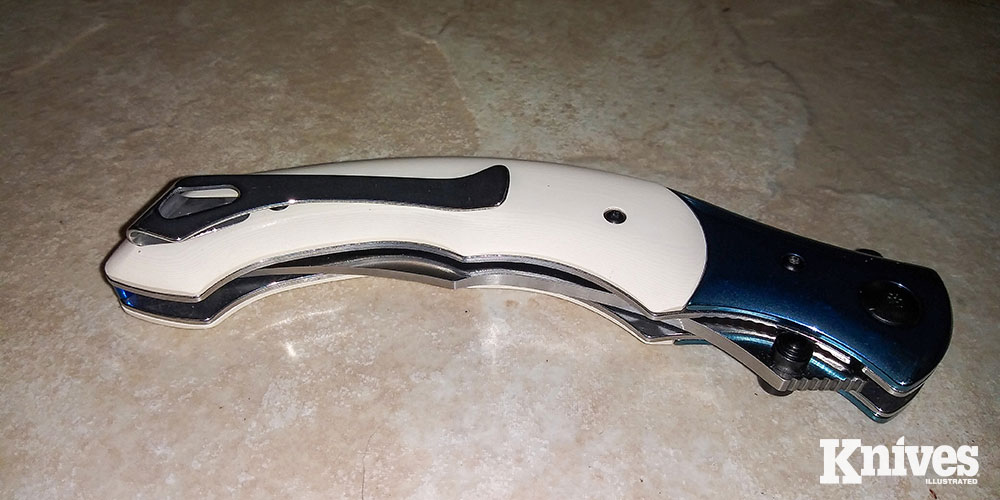 The pocket clip is not reversible and holds the knife in tip-up position in the pocket.

Personally, I like a knife that has a little heft to it. The Ritual is by no means dead weight, but there’s enough there to let you know you’re holding a well-built tool. The balance point is right where the bolster meets the white Micarta.

NOT YOUR AVERAGE EDC

The CRKT Ritual is the sort of knife that you carry for looks as much as you do for functionality. It will definitely turn heads no matter where you go. While it performed perfectly adequately, users should be prepared to touch up the blade with some stropping before putting the knife to serious use.

As an EDC knife, it is a bit much, but for those seeking something a little flashier than the same old thing, this is just the ticket. And if your daily routine occasionally involves battling hordes of harpies or giant scorpions, you’ll definitely be ready for action!

The curved sword was historically popular in the Middle East, whereas Europeans favored a straight blade. The reasons for the preference for them in these desert lands were largely due to the battles fought on horseback. The shape of the blade allowed for devastating slashing attacks while on the move. It is physics, more or less, due to the curve of the blade approximating the swing of the user’s arm.

While there are many variations on this theme, the word “scimitar” has become something of a catch-all to refer to single-edged swords with a curved blade. The truth is there are numerous iterations of this basic blade shape, including the shamshir, kilij, and talwar.