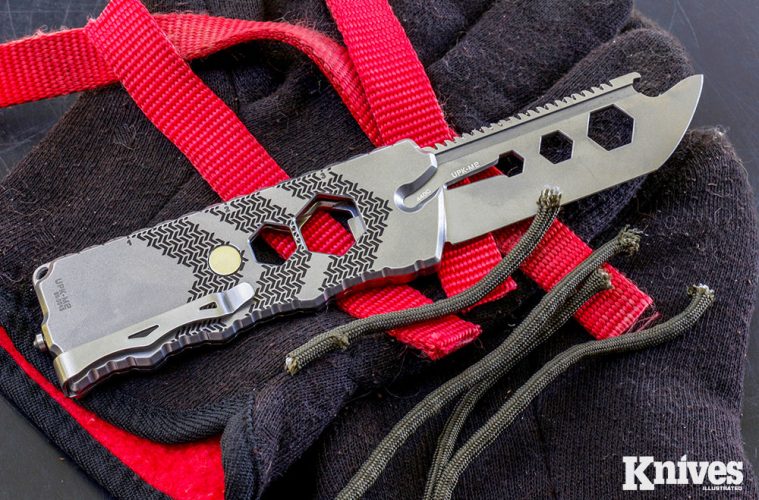 For me, a knife is an indispensable tool that I call upon every day. So, am I ever caught without one? The answer is both “yes” and “no.” How so? Yes, there might be a few times when I’m not carrying a dedicated knife on my person. But no, if I don’t have a dedicated knife, I at least have a knife blade that’s part of a multitool I’m carrying instead.

“It is simply the best multitool I’ve found, with the most useful tools, that also carries like a typical pocket knife because of its extremely flat profile.”

While I often have both, carrying a multitool instead of a regular folding knife is happening a bit more frequently now that I’ve found the UpKnife UPK-M2.What is a UPK-M2? Well, it’s not a German submarine or a Soviet automatic weapon. Obviously, “UPK” stands for UpKnife. The “M” denotes this is their  multitool and the “2” indicates that this is the second and improved version of the design.

It is simply about the only multitool I’ve found that has truly useful tools and carries like a typical pocket knife because of its extremely flat profile. 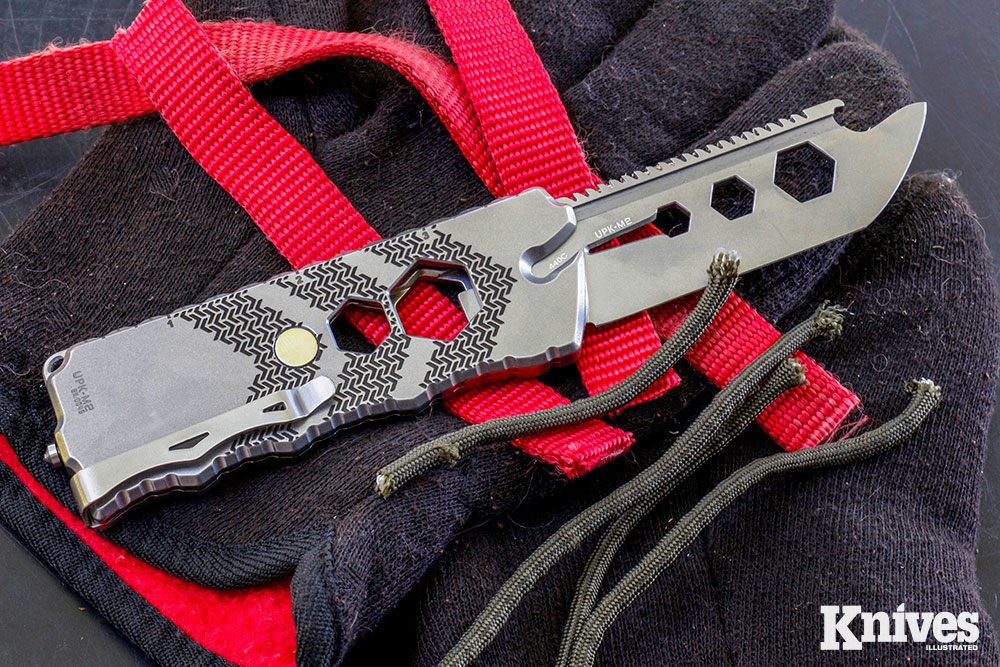 The UpKnife UPK-M2 is an updated version of a clever multitool with lots of utility and a flat profile for your pocket. With the blade fully open, it is long enough to handle most any task.

The fact is, on a daily basis I need more than a knife alone. I might have to turn a screw, tighten a nut, strip a wire, or saw through some PVC. That’s in addition to opening packages, cutting rope or slicing an apple. While I own some very good multitools, I find that because of their size and weight I’m either not bringing them with me at all or I’m leaving them tucked in some pocket of my travel bag or pack, where they aren’t as conveniently accessible.

So, how is the UpKnife UPK-M2 different? For one, it’s not based on a folding pliers design. While I hate giving up the pliers, their absence allows the UPK-M2 to be very thin. This multitool is basically a knife blade that extends out the front of two stainless steel handle panels that incorporate a number of other tools. 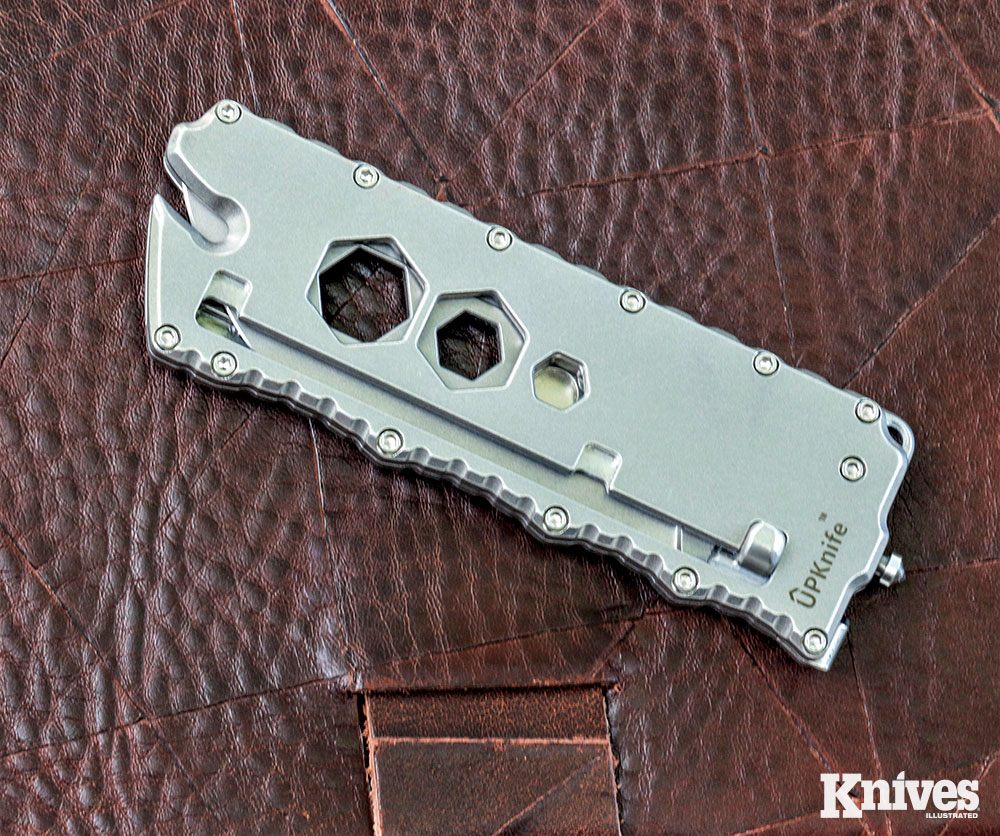 Fully closed, this multitool is a compact package that you won’t mind carrying on a regular basis. The bolt-action mechanism allows you to open and lock the blade one-handed with your thumb. The blade retracts with spring action. With the tool closed, the notch in one end allows the tip of the cutting edge to be used as a line cutter. 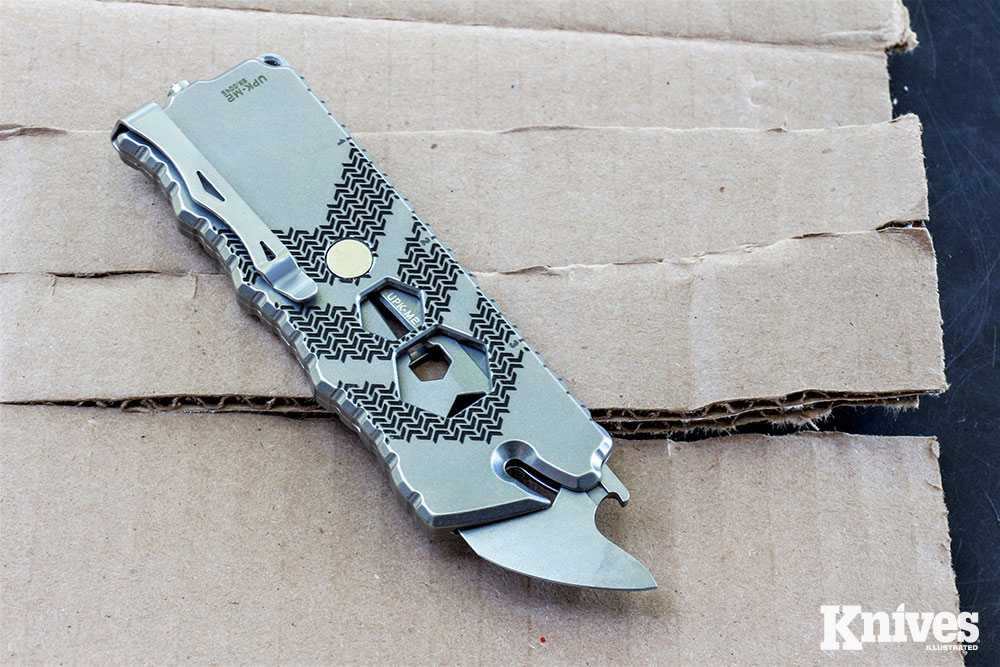 At the first open blade setting, the bottle/can opener is accessible and the cutting edge of the blade itself is just the right length for opening boxes without the chance of damaging the contents inside.
For a sure grip, the chevrons on one side of the handle provide some texturing along with the jimping and finger grooves on the outside edges. The tool features a pocket clip and because the UpKnife is so flat, you won’t mind tucking it into a pocket.

At the first bolt notch about an inch of the blade is exposed. The extreme end of the blade is formed into a bottle opener. It’s not sharpened, but the bottle opener was pointy enough that I tried it as a can opener. It wasn’t as easy to use for opening cans as the sharpened opener on a Swiss Army Knife, but in a pinch you could use this to get the job done. 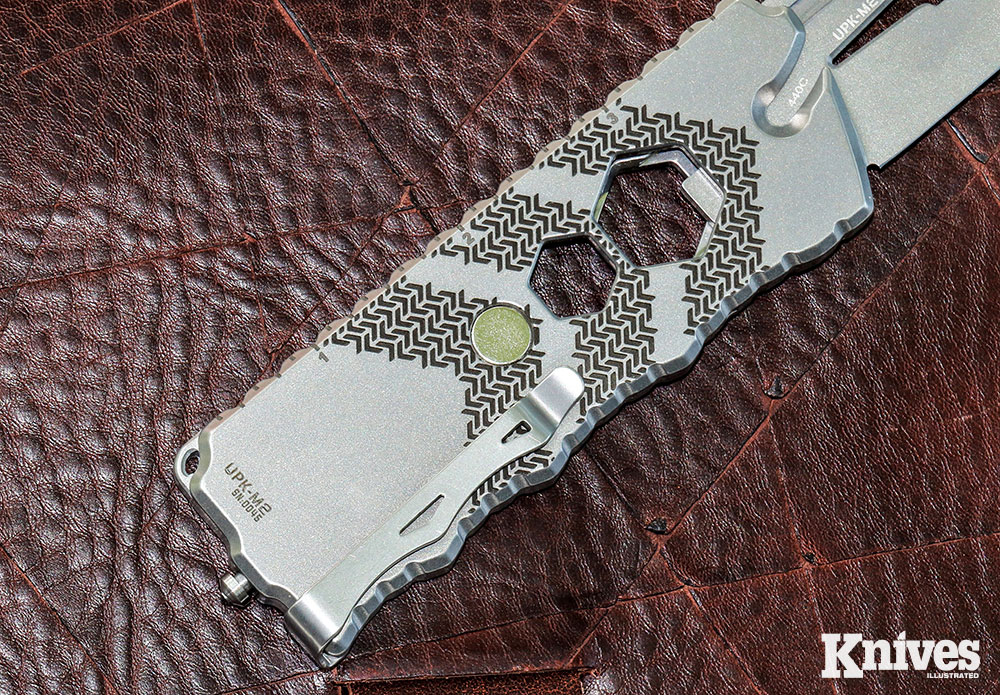 The tail end of the UPK-M2 features a tungsten carbide-tipped glass breaker that can also be used as a center punch marker. A small circular magnet on this side helps to keep ¼-inch bits in place. Its removable. 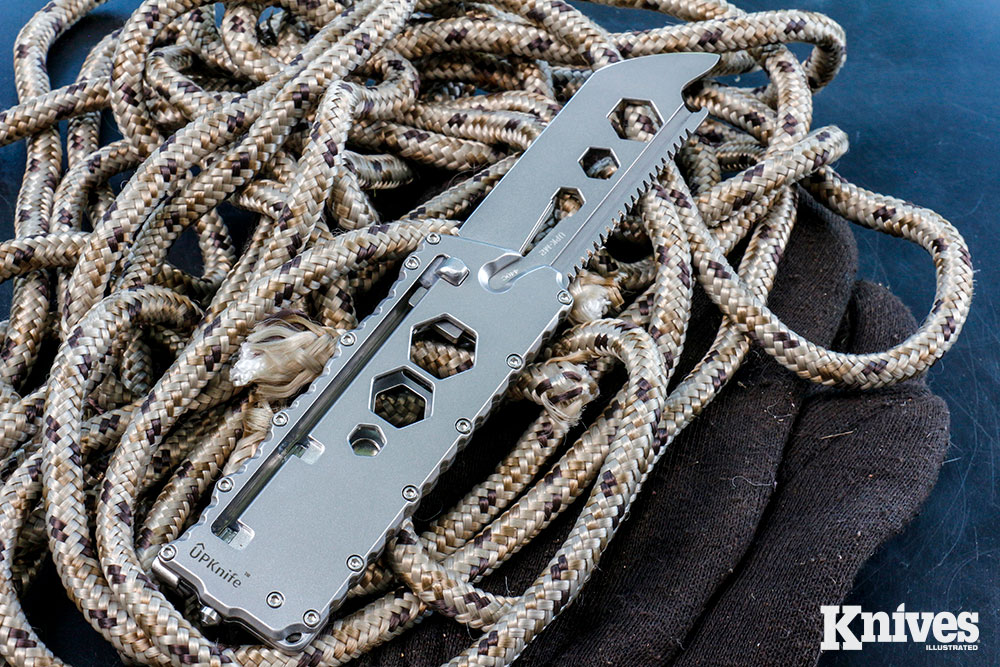 The tool has multiple hex box wrenches located on the handle and the blade itself.

The short portion of the cutting edge that’s exposed at the first setting makes a perfect box opener. Because the short edge limits the depths of your cuts, you can safely open boxes without the risk of damaging contents inside. That part of the cutting edge is curved as well, so that working the blade back and forth in a rocking motion allows cuts on tough material, such as a garden hose. 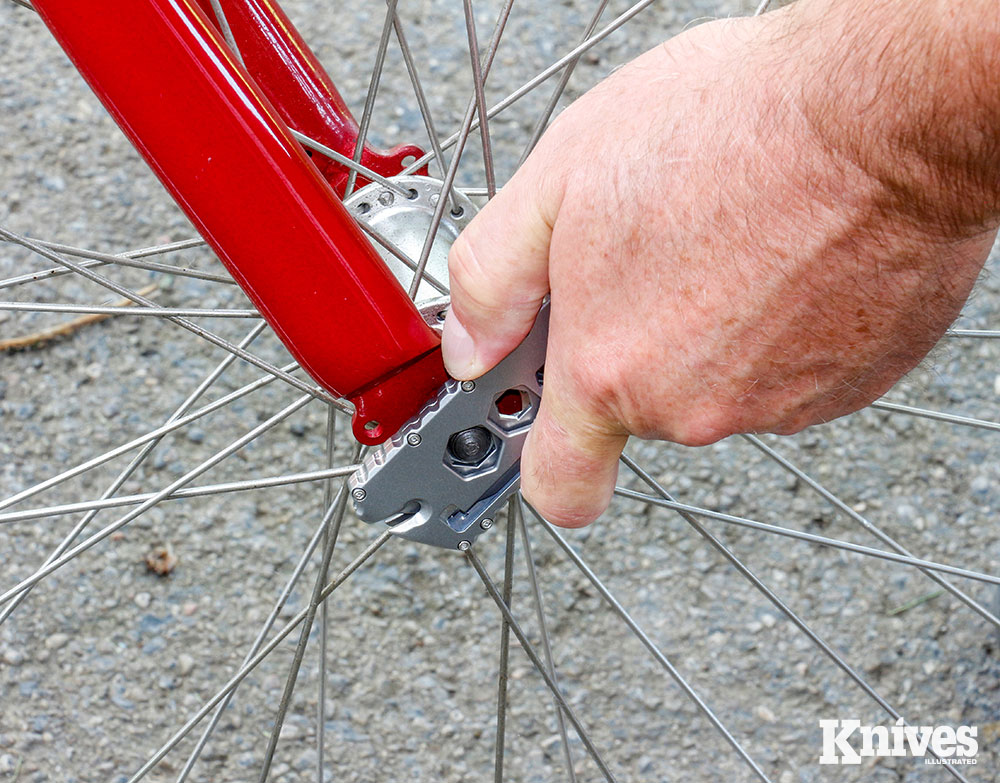 The wrenches on the UpKnife can come in handy. And the UpKnife is easy to bring along when you’re traveling light.

At the next bolt notch, the full 3.2-inch blade of 440C stainless steel is exposed. The blade was sufficiently sharp when I received the tool and did a fine job of slicing through various materials. On the spine is a saw. I tried the saw on wood and it worked, but it didn’t cut as vigorously as I’d hoped. 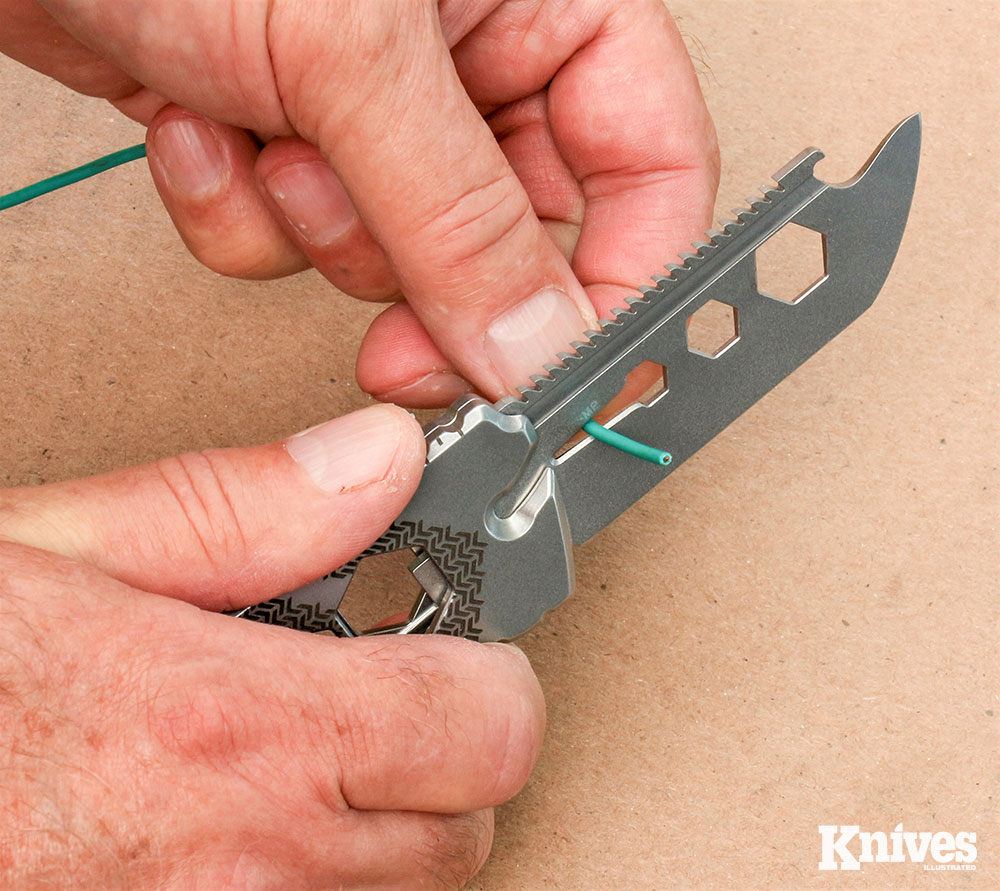 The author found that the handy wire stripper within the blade worked very well.

Also on the blade are three of the tool’s eight hex wrenches. There’s a V-shaped slot at the bottom of the smallest wrench. That’s a wire stripper that works with various sizes of wire to strip off the insulation. Insert the wire into the slot and rotate the tool a quarter turn one way and a quarter turn the other and then simply pull the insulation off without harming the copper wire inside.

Yet more tools are found on the UpKnife UPK-M2’s handle scales. When you release the bolt, the blade closes by spring action. When closed and locked, a small portion of the blade is still accessible as a line cutter via a slot at one end of the handle.

On the side of the handle with the bolt, there are three more hex wrenches. The smallest of these serves as a ¼-inch bit driver with the multitool itself as a T-handle. Picking up a set of bits at a hardware store would be a good accessory for this multitool.

There’s a removable magnet on the opposite side of the tool from that ¼-inch wrench / driver. It’s meant to keep the driver bit in place so that it doesn’t fall into some crevice where you’re working. Because the magnet is removable, you could tape the magnet to a piece of string and use it to retrieve small screws or nuts that might fall out of your reach.

“…a simple bolt-action mechanism…allows the blade to be locked…open at two different positions, giving you essentially two different blade lengths.”

On the side of the tool with the magnet, there are two more hex wrenches. This side has three textured areas in the shape of chevrons that serve to provide a more secure grip on the tool. They also enhance its looks.

There is wide, beveled jimping on the outside edges of the handle, top and bottom with four shallow finger grooves on the bottom as well. These also serve to enhance the grip without being abrasive.

At the tail end of the handle is a tungsten carbide-tipped glass breaker. I’ve tested such tools in the past and found them very effective at breaking auto glass by directing a forceful blow with the breaker tip to a lower corner of a car’s side window. The tip can also be used as a center punch to mark a precise spot you need to drill a hole.

There’s a small lanyard hole in one corner of the handle, but it would allow for the use only of very fine cordage. If I wanted to put the tool on a lanyard, I might try a loop of high-strength braided fishing line that’s extremely strong for its tiny diameter.

Inside the lanyard loop is an access port for adding a drop of lube. Rounding out the features of the UPK-M2 is the deep-carry pocket clip.

The UpKnife UPK-M2 is a clever design that’s executed with good materials and fine workmanship. One drawback might be the price. The tool is available with either a gunmetal gray finish for $350 or a natural stainless steel finish for $375. There are lots of products on the market listed as multitools that consist mainly of a small pry bar a bottle opener. The UpKnife UPK-M2 is much more than that. 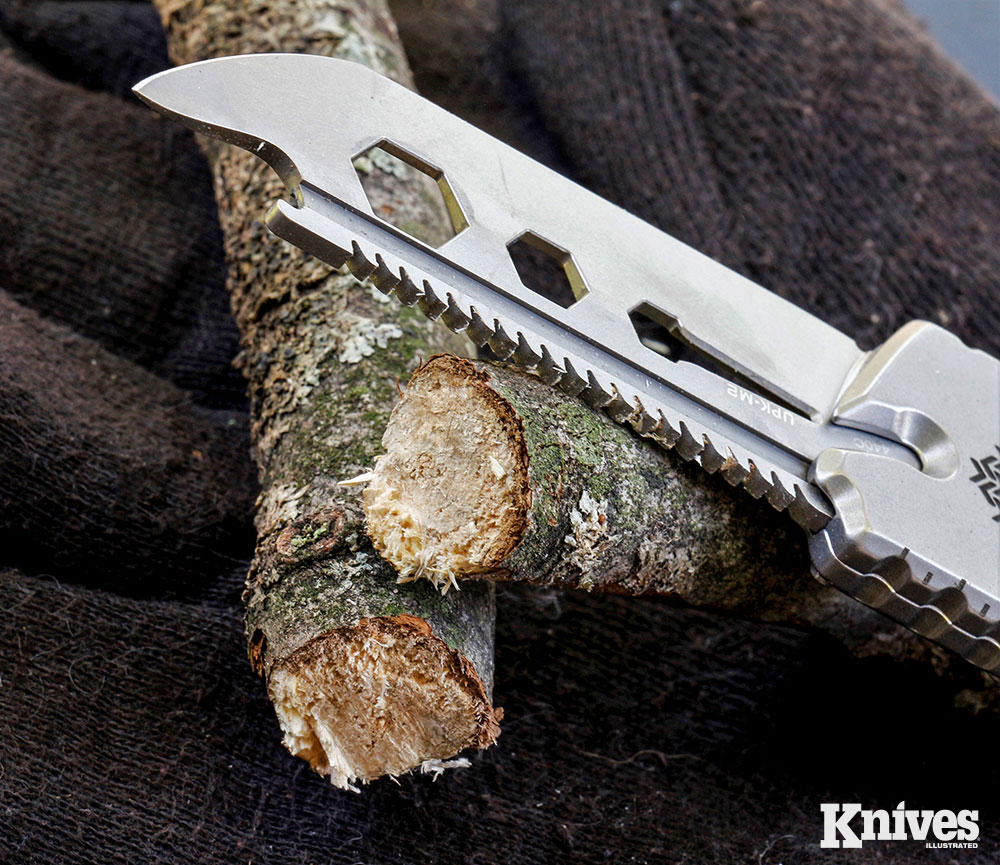 The saw on the blade spine was able to cut wood, although its teeth were designed for use as a general, multi-purpose cutter better for other materials and not optimized as a wood saw.

The ¼-inch wrench on the tool can turn the UpKnife into a T-handled bit driver. Bits aren’t included. The author used a set of bits from a Tactica kit he had.

With an occasional drop of oil on the spring and a couple of swipes of the blade on a ceramic sharpener, you’ll have an American-made multitool with lots of utility in a flat package that rides as comfortably as you favorite pocket knife. My prediction is that some smart company will offer to buy this design from UpKnife owner John Risch and mass produce it.

UPKNIFE IS A ONE-MAN OPERATION

UpKnife is the solo enterprise of John Risch, an electrical engineer who runs the business from his Agua Dulce, California shop. He imagines, designs and manufactures all of his company’s products. He even cut the round foam cushions that hold the multitool in its tubular packaging.