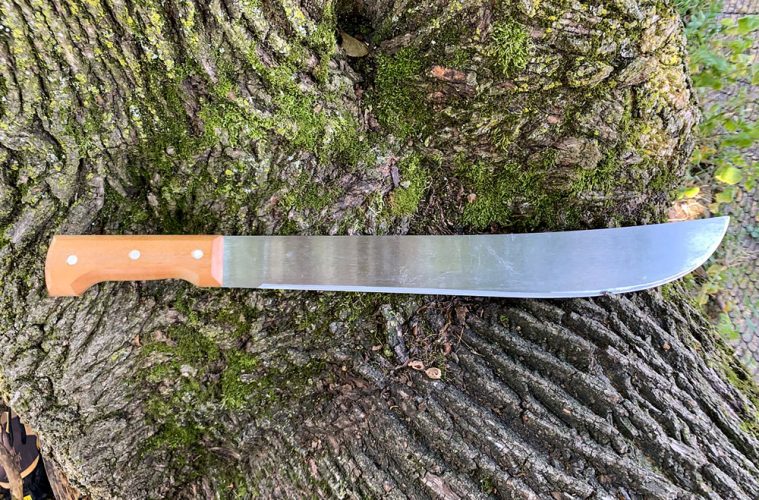 Tramontina – The Blade You Didn’t Know You Needed

The Tramontina machete is a bit of an enigma. It has an exotic-sounding name and is from Brazil. The blade shape reminds you of classic jungle-slashing tools you see in the movies. Also, it has a nice-looking wooden handle and comes with a pretty decent sheath. But you can buy it at your local big-box store for $20. What?

Like most first-time Tramontina buyers, my purchase of this machete was mostly unplanned. I somehow managed to lose my faithful old Gerber machete (I know it’s hard to lose a machete, but you’ve never seen the giant mess that is my garage) and needed another one pronto to do some yardwork.

I went to Lowe’s planning on buying another Gerber or something and saw this beauty for about a third of the price. There I figured it was worth a shot and was definitely worth more than that.

“Now that I own one, I can’t imagine ever being without a Tramontina machete.”

At first, I thought that “Tramontina” was the name of the style of machete or something. It sounds exotic enough to be. Turns out it’s actually a huge company.

Tramontina was founded by Italian immigrants to Brazil in 1911. It now makes just about every sort of cutlery you can imagine and has grown into one of the largest employers in the country. 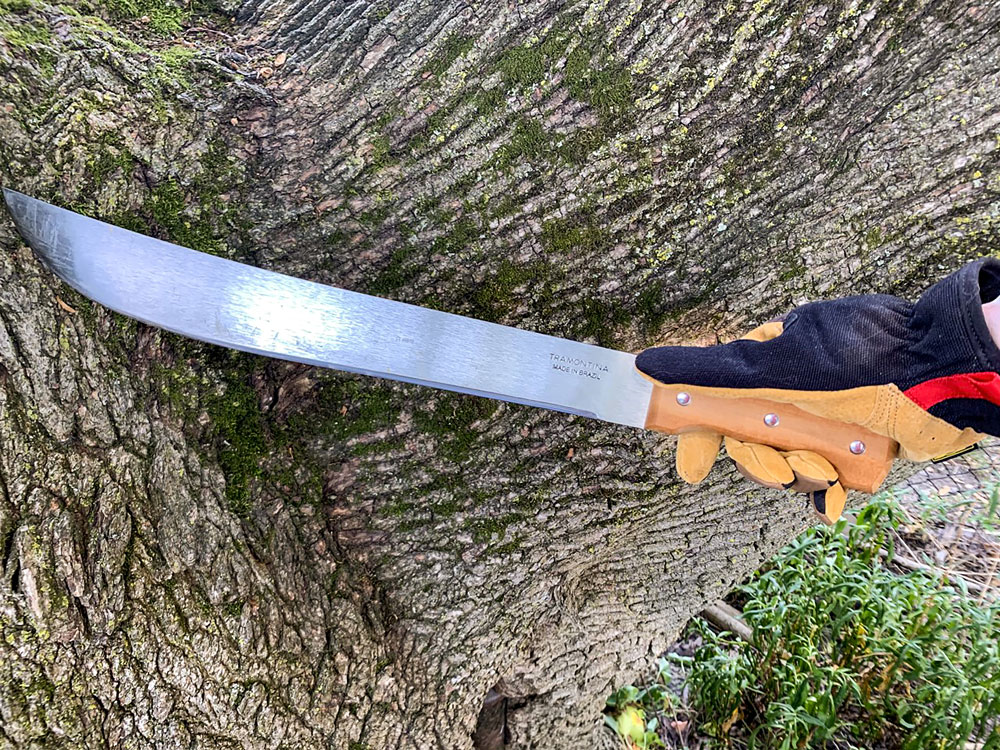 The blade required a new edge from brand new, but it sharpened up quickly, and edge-retention seems to be more than acceptable.

You Get Way More Than You Pay For

The Tramontina is a pretty impressive package hanging on a hook in a store. The wooden handle is very well-finished, and the canvas sheath actually seems very sturdy and well made.

The edge out of the box (out of the sheath?) wasn’t terribly impressive. It wasn’t sharpened at all up near the tip. It probably would have been just fine for its given task, but I own a Work Sharp and am an edge snob, so I went at it.

The sharpening job took me a good solid half hour, but once I was done, I had an edge that was still about 35 degrees, but it was almost as sharp as that on some of my pocketknives. Even with a lot of use the last couple of weeks, the Tramontina has held that edge well. This definitely isn’t junk steel.

The machete did have some sort of unidentified weird clear coating on the blade. It was almost like some sort of epoxy. I assume it is there to protect the carbon steel from corroding while it’s hanging on the aforementioned hook in a store for who knows how long. Whatever it is, it didn’t come off with alcohol, but it started wearing off after a few uses. 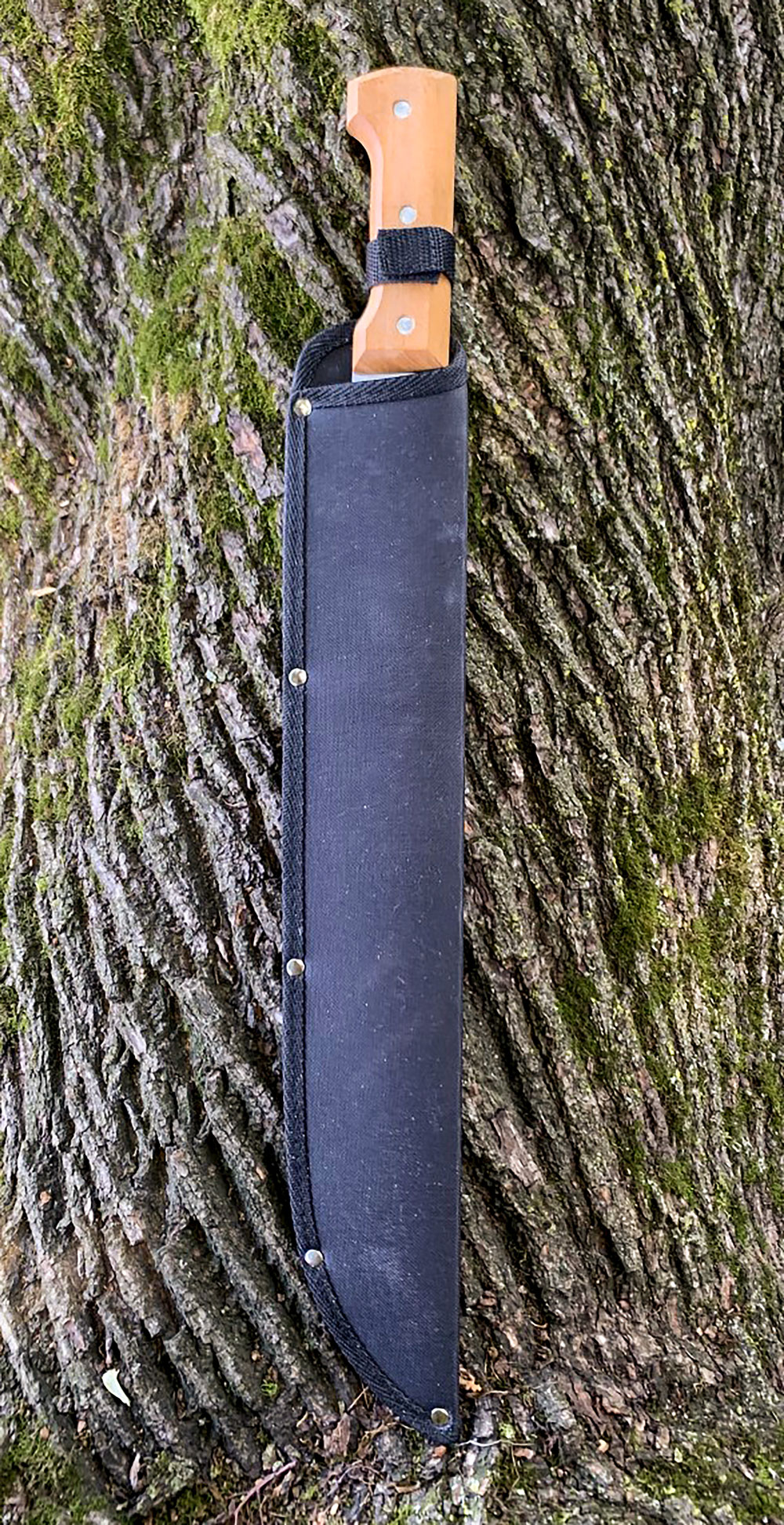 The provided sheath is very well made for the money.

Destroyer of Yards, First of His Name

With a new edge, I went out to tackle the overgrown weeds (almost small trees by now) that had accumulated in my yard during my self-imposed lockdown staycation. “Hot knife through butter” is an overly used analogy in the knife world, but it applies here. The Tramontina made VERY quick work of all the weeds and brush of various types.

This machete actually made the task a joy to accomplish as well. The balance is obviously very blade heavy but gave just enough help with forward momentum without being unwieldy. I mostly wore gloves while using the machete, but even without them it was very comfortable in the hand.

After I was done tackling the weeds, general hooliganism ensued. Give a man a big, sturdy machete in a backyard for a while, and he’s going to destroy some stuff. It can’t be helped.

“Someday, I’ll find my old Gerber. And then I won’t use it and I’ll lose it again. It cost me three times as much as the Tramontina, but it has been replaced.”

Chopping wood with a machete isn’t something I’d want to do every day, but the Tramontina did it very well. I knocked down some large branches that had fallen over the winter into firewood.

That was easy. Huh… Wonder if I can split some of those old two-by-four scraps into kindling. Yep! Whether chopping or batoning, this budget machete performed very well. By the way… I don’t even own a wood stove or a fire pit. But hey… I have firewood now!

The sheath also works pretty well. It flopped and slapped around a little bit, but that could easily be fixed with an extra strap. A Velcro retention loop keeps it securely stowed, and the top loop is big enough for just about any belt.

Even with the tip sharpened, it doesn’t seem to be in any danger of cutting through the end of the sheath. And let’s face it… It feels cool having a large machete strapped to your hip. Much cooler than wielding an electric weed whacker. 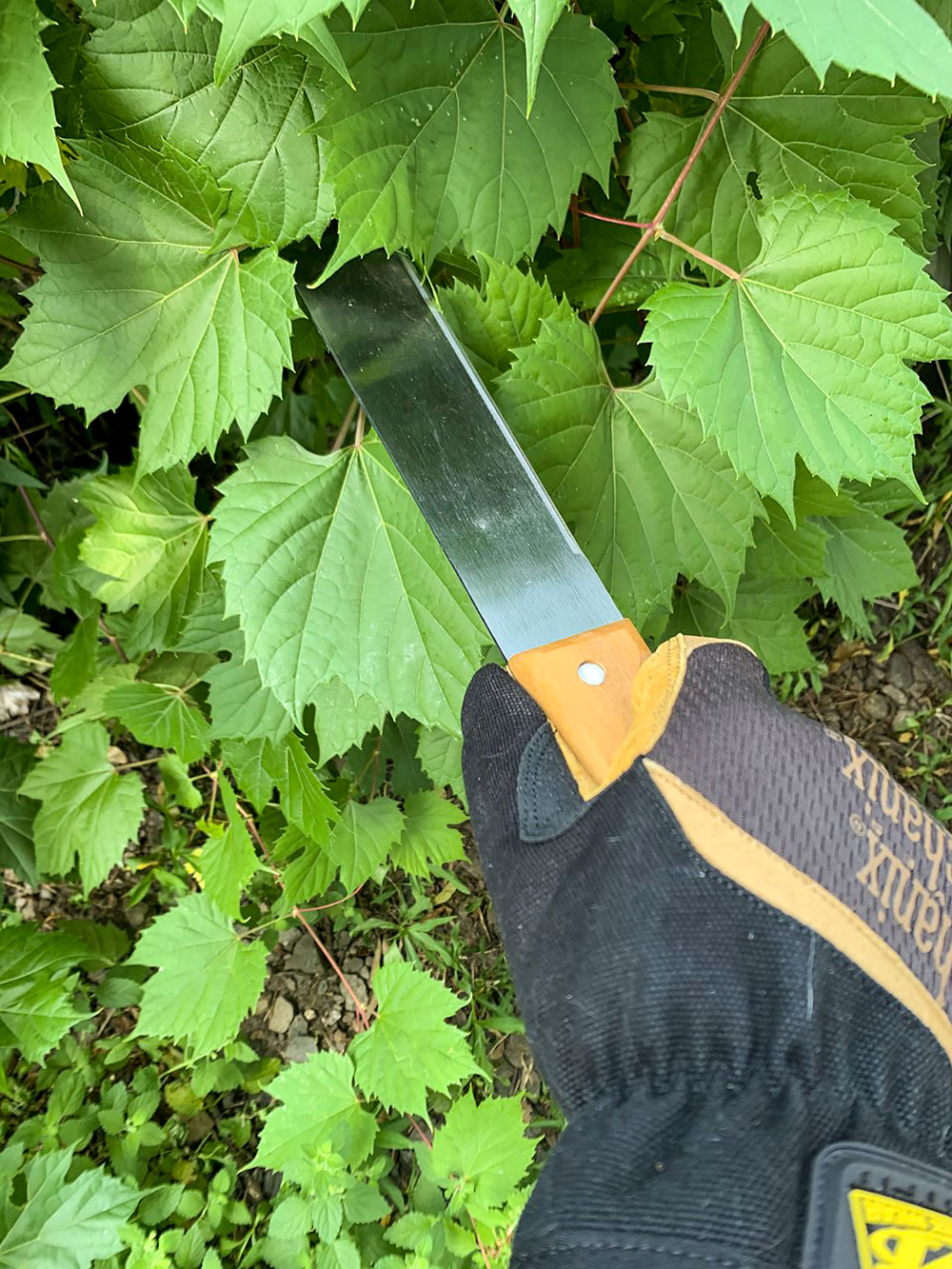 The Tramontina makes quick work of most tall weeds and brush.

There are two types of people: the normal, smart humans who read reviews BEFORE they buy things, and me, the guy who buys something on impulse and then rushes home to watch YouTube videos about it. What I found was that this little $20 wonder has a huge cult following.

You’ll find videos with titles like, “The Ultimate Backpacking Machete” and “Tramontina Machete: Still the Best”. After using the Tramontina for the last few weeks, I may be making a video with similar platitudes myself! Actually, I guess I’m accomplishing that task here.

If you shop around, you can find Tramontina machetes in a range of blade lengths and styles. Many experienced campers and bushcrafters own several. Some have even modified them to a specific task. It seems that having one of these can become a hobby within a hobby in and of itself. I may be joining that camp myself. 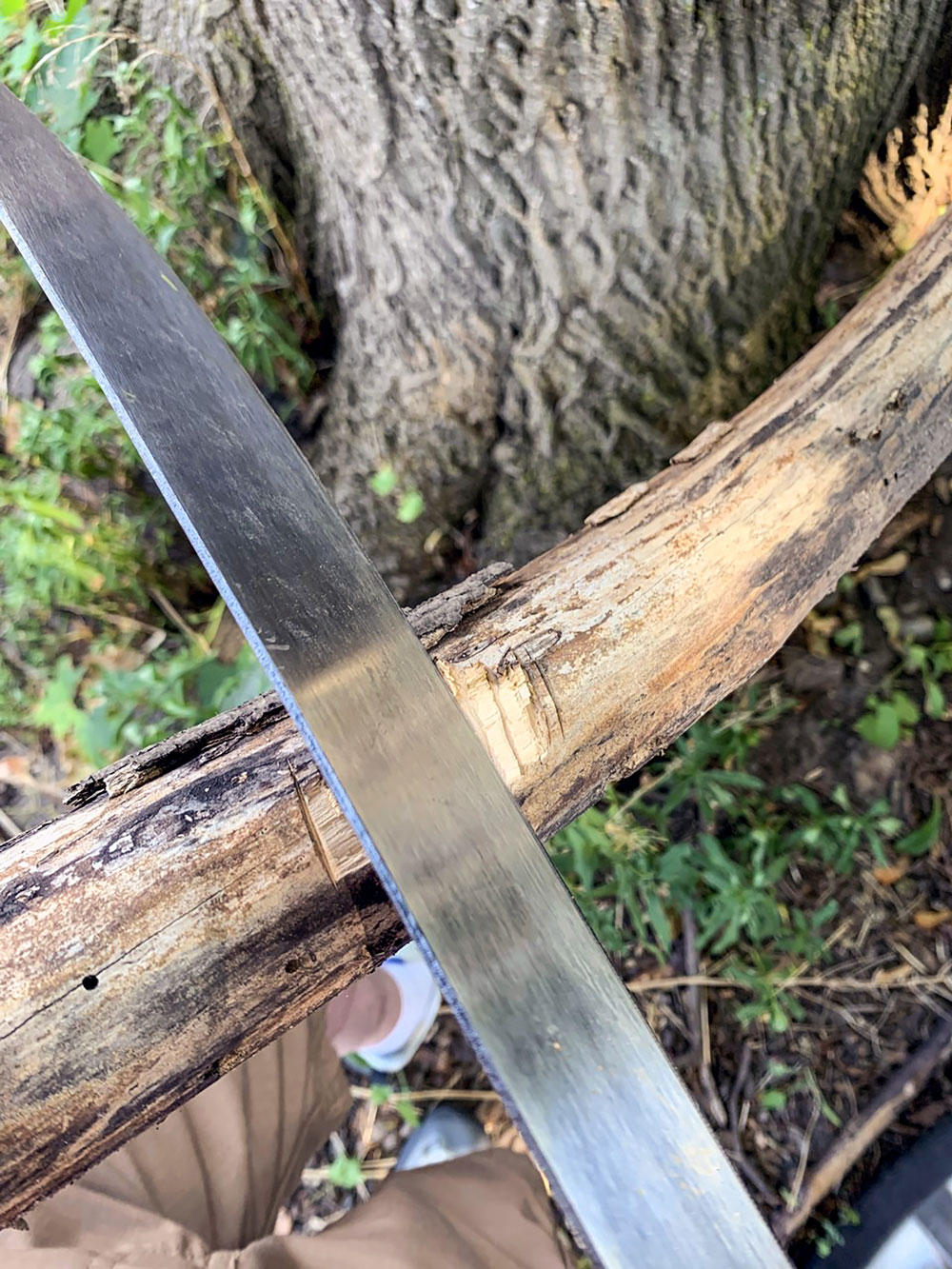 Chopping with a machete can take a bit of work and probably isn’t the most efficient method, but it sure is fun!

Getting my hands on this machete has truly been one of those “Where have you been all my life?” sort of moments. I think back to days at my old house that had a small bamboo thicket that was always driving me crazy.

Or even more to when I was an avid mountain biker cutting trails with my friends. This would have been a great companion strapped to my Camelbak on those sweaty days of clearing bush.

Now that I own one, I can’t imagine ever being without a Tramontina machete. Someday, I’ll find my old Gerber. And then I won’t use it and I’ll lose it again. It cost me three times as much as the Tramontina, but it has been replaced. KI