What is your worst nightmare? For me, there is nothing more disastrous than having a knife fail when I need it the most. While many would say this is only an inconvenience, some rely on these tools as their main item for survival. To them, knives are not just a statement piece — they are tools to be utilized in multiple scenarios. Jeremy Valentine is an example. 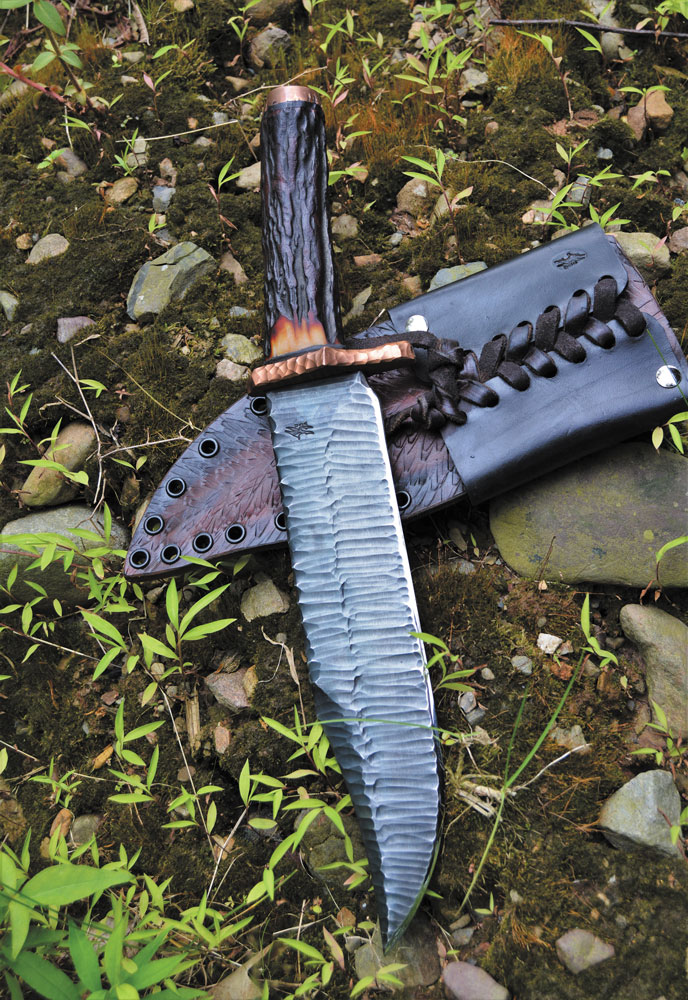 As a youngster, he got lost in the woods during a hunting trip. Of course, it’s routine for hunters or campers to carry some essential tools. Regardless, these tools are scarcely put through demanding tests. Sure, they hold up just fine to normal use and mild abuse, but survival needs are different. Like all hunters, Jeremy had several of the knives that held up well under normal circumstances. As he wandered deeper into the woods over several days, however, each knife failed with simple fire prep or shelter building. After he discovered a river and navigated his way back, he made a promise to himself: Make an indestructible knife that would never fail in the field. Years later, Jeremy used this experience and his knife making skills to do just that, as he established a company called Valavian Edge Craft.

Why He is Different

My first exposure to Jeremy’s work was an oversized sword that looked like it was from an animated game or movie. As I began to follow his work more closely, I started admiring the details and themes that all his creations breathe. He is one of the few current knife makers that is consistently pushing the limits of materials and design while keeping his knives completely functional. His designs are big, bold, beautiful and brilliant.

“WHEN USING THE KNIFE, MOVEMENT IS SMOOTH AND EFFORTLESS WHILE ALLOWING FINE CONTROL THROUGH SIMPLE AND PRECISE WRIST MOTIONS.” 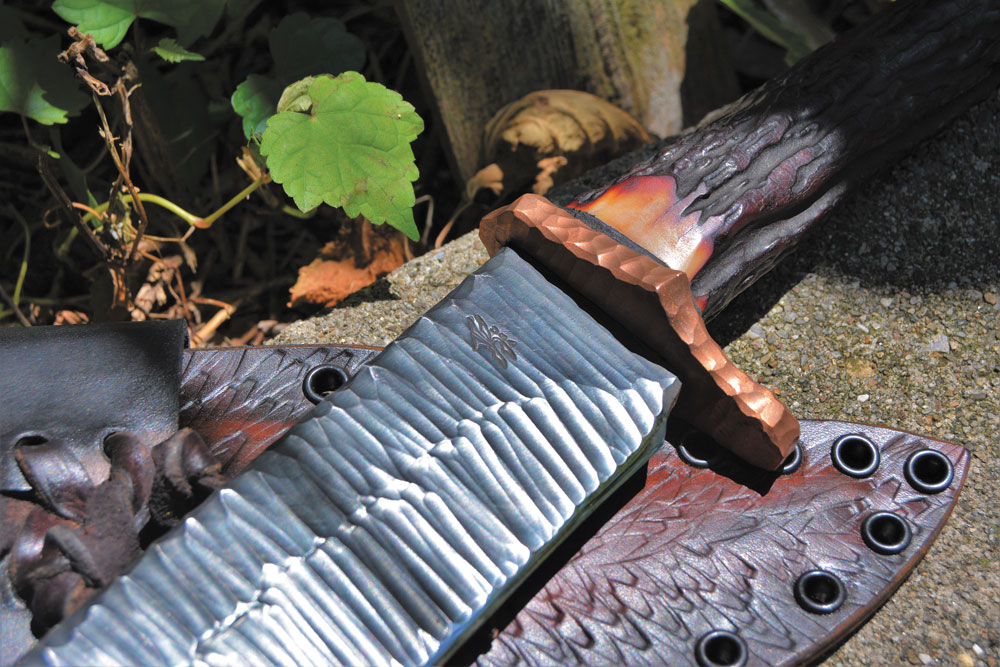 About three years ago, his “large and in charge” knives found their way through some of my social media accounts. As I admired them, I recalled the times when previous knives failed me. At that time, it seemed to have become standard practice in the knife industry to produce unique designs that don’t always function efficiently. So, I reached out to Jeremy to talk about these designs. He almost always replied to me with photos or videos of his knives performing some pretty fantastic things. I was impressed … and even more so when I got my hands on the Primal Bowie.

The Bowie knife is one of the main design styles that Jeremy enjoys. As most knife lovers know, the history of the Bowie knife is long and detailed — and a little confusing. Over the years, many people have written about the Bowie’s history and design, but no one seems to agree on every point. However, there is one thing that they all agree upon — the current styling. 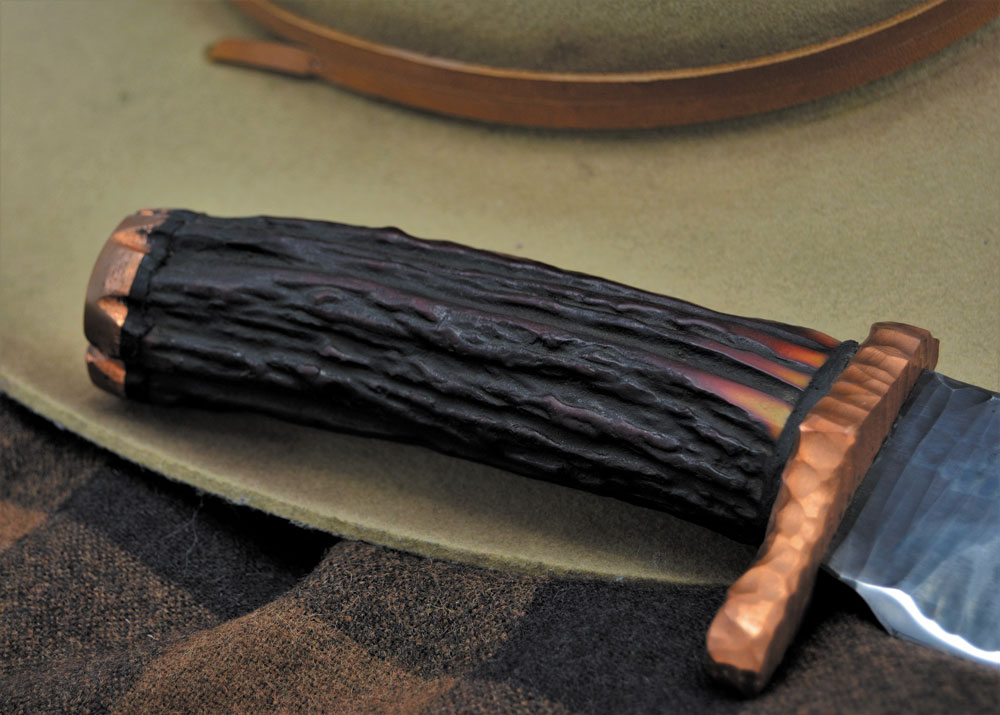 A sambar stag antler handle pulls the entire design together and houses the tang. It’s capped with a copper, screw-on endpiece.

Crocodile Dundee (Paul Hogan, the main character from the late 1980s action-comedy) would be proud to carry this knife. Made from 80CRV2 steel and finished into a convex edge, the blade is fully shaped and textured as if it were a stone-knapped knife. The blade comes in at 9.54 inches. Overall, the knife is 14.96 inches and weighs 26.7 ounces or 1.6 pounds.

Both the copper pommel and copper endcap sandwich the sambar stag handle. The knife features a gun bluing on the blade and is paired with an outstanding leather sheath that offers right- and left-side wear with a slight cant.

For the size and the weight, the balance is right on target. It is not tip-heavy or weighed down in the handle. When using the knife, movement is smooth and effortless while allowing fine control through simple and precise wrist motions. This is another example of Jeremy’s outstanding work.

Because of the heavy texturing on the handle, you do not have to worry about losing your grip. The handle, which is slightly offset and curved, features natural materials like stag. Granted, this may make someone’s OCD flare up, but it provides an outstanding grip for both right- and left-hand users.

The sheer size of Valavian Edge Craft’s Bowie design dwarfs even the heftiest of 2x4s.

For increased protection from slippage, the copper pommel is cut low, and it shares the knapped texture of the blade. If I had to choose only one polarizing feature of this knife, it would be the pommel.

The knife has a minimal weight tilt toward the blade tip with the balance being perfectly centered at the maker’s mark. This is one of those small details that many custom knife makers and companies frequently overlook.

So, how does this gem perform? Like a pro. Recently, a ton of rain drenched my city. Roads were flooded. Trees fell. While this created misfortune for many, it also created some ideal testing conditions. One of those aforementioned trees found its way across my driveway. This was not my tree; it belonged to a neighbor. Being the good neighbor that I am, I decided to make sure they were aware of it. Because the root system was still deeply planted on their property, I left the cleanup to their discretion. Three weeks later the tree was still obstructing my driveway. I figured I could get mad or get to work. I opted for “B” because this seemed like the ideal opportunity to test the knife. After all, nothing says, “Take care of your damn tree,” like an oversized Bowie knife. 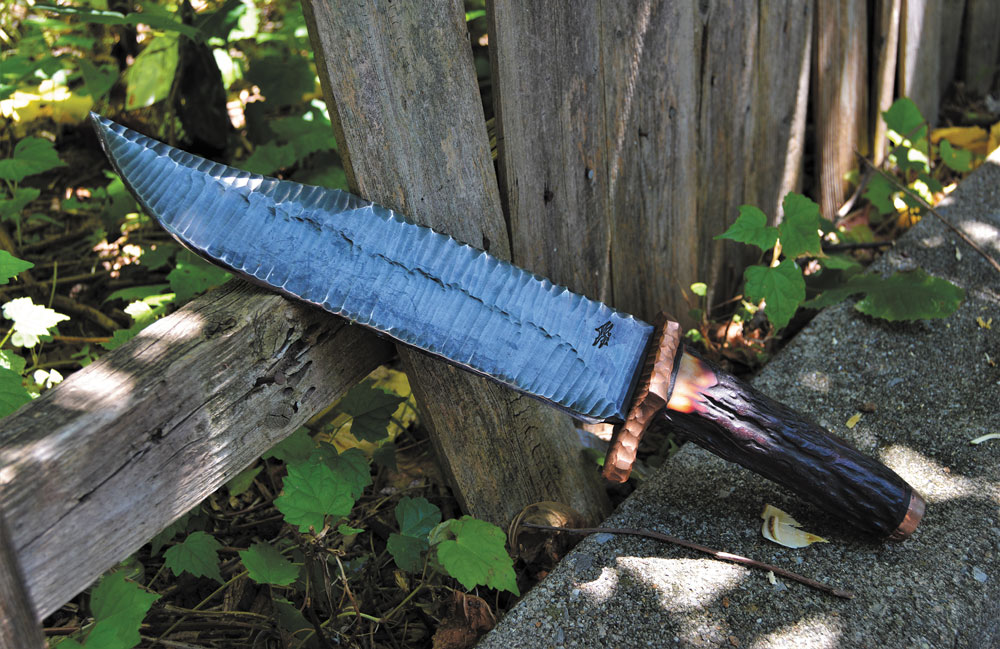 After some use, the knife still looks as good as new. While there might be some minor bluing loss, there is no great detriment to the blade itself and it retains its original edge.

Choosing one of the larger branches, I made quick work of the obstruction. Valavian Edge Craft’s Primal Bowie weighs just as much as a large hatchet head. With much of that weight in the handle, it takes some effort to really swing. Still, it made very quick work of the branch. Each chop was clean and effective. Even glancing blows quickly found their way to the center with the edge geometry. With every hit, there was a solid feeling to the knife — and no vibration.

Fine work was a bit more challenging, although certainly not impossible. It’s apparent that fine woodworking (or carving) is not where this knife excels. The edge geometry also makes it a little difficult to determine the perfect angle. However, once the angle is acquired, the knife moves like silk. The uniform grind and polished edge allow for smooth transitioning with minimal binding or catching.

Reliability You Can Count On

Without a doubt, Valavian Edge Craft’s knives are unique in their comprehensive designs and construction, and it is apparent that knife enthusiasts appreciate the raw and unobstructed imagination that bred these knives into existence. Where Valentine really stands out is his ability to develop these knives with the hardiness that allows them to be utilized at maximum potential. These aren’t knives you pull out to cut paper. These are knives that enable you to carry a singular tool you know won’t fail in the field. 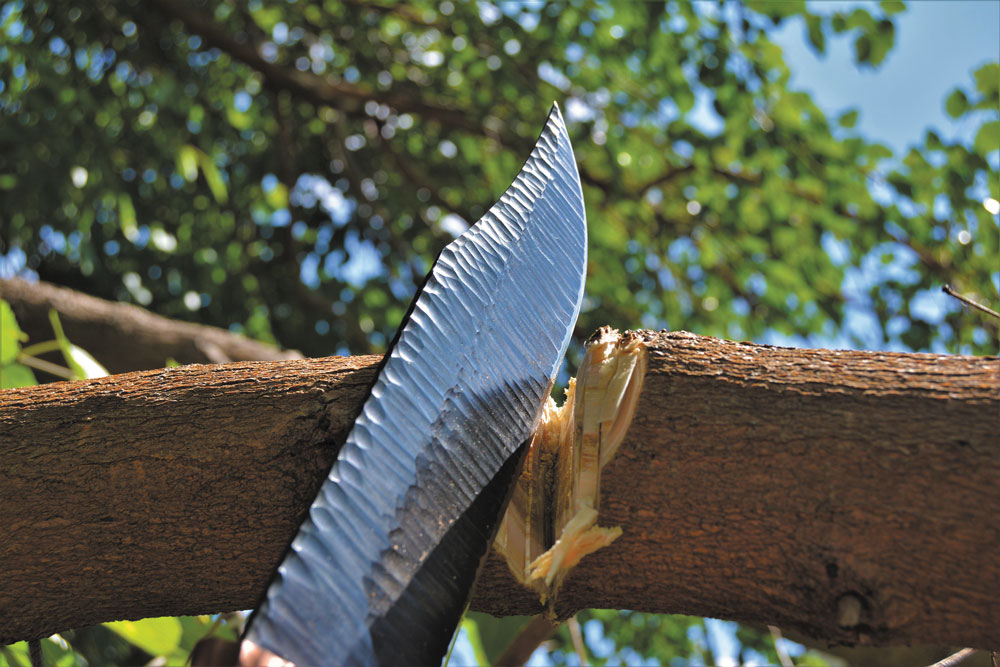 The knife blade seated itself comfortably in the branch and continually seated in the center. The blade’s edge geometry aided in simple and effective chopping placement.

And the Primal Bowie is a perfect example, as it captures all the qualities you need from a knife in the rugged outdoors, for survival and utility. The materials used set this knife apart from the vast majority of the knives on the market today. The usability factor really puts this knife ahead of nearly all other knives. The hardy grip and textured blade make it look appealing and function better. There is no fear of impact or loose fitting with this knife. Just like that pesky neighbor’s tree, Jeremy has knocked this knife over the fence.

When it comes to dependable knives, I certainly know to which company I will turn. And I can assure you I won’t have any nightmares. What about you?

The Path To Glory

Jeremy Valentine’s fascination with knives began early. He and his brother discovered a knife their father made, and this set them on the path to creating their own designs, but their fascination gradually faded. When they graduated from high school, their interest in knives hit an all-time low. Things changed, however, when Jeremy got lost for several days during that hunting trip. Five years into this “old” path, Jeremy is producing top-notch styles with heavy-handed, hard-hitting materials.

It is not commonly found in a lot of knives, but 80CrV2 steel is quickly becoming popular. For the woodsman, it’s a near perfect steel option for knives. One of the closest alternatives is 5160 steel. The hardness is nearly identical between the two steels, but edge retention, brittleness or the lack thereof, and the ease at which it can be treated is what sets 80CrV2 apart. Another bonus of 80CrV2 is that it tends to carry a fairly low price point.

Find Valavian Edge Craft on Facebook at Facebook.com/ValavianKnives On the web, go to Valavian’s dealer at CascadiaCutlery.com. Call them at (503) 505-2567 Or email them at cascadiacutlery@gmail.com