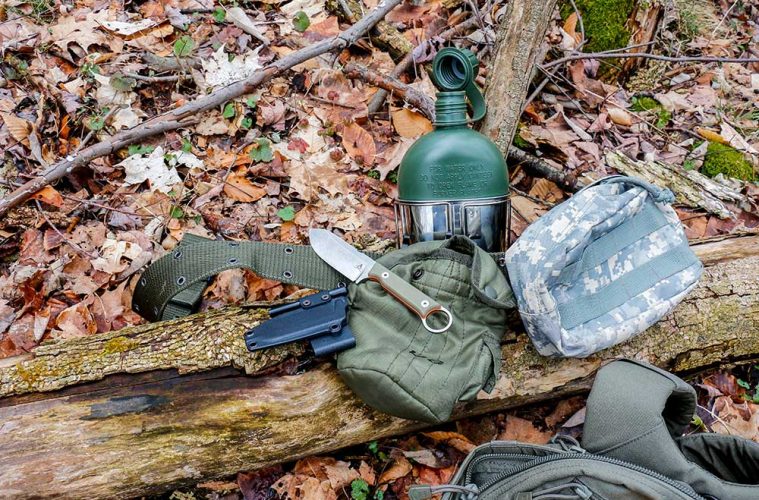 THE WHITE RIVER FIRECRAFT FC 3.5 PRO IS EVERYTHING A WOODS KNIFE SHOULD BE

There are many good knives out there, and I pick my favorites from among those that best suit my particular tastes. But I know too that some knives simply are better for certain uses than others.

When it comes to an all-around fixed blade for camping, hiking, and general woods wandering, the White River Firecraft FC 3.5 Pro is one that I’m becoming increasingly fond of as I work with it more and more.

“It has great handling characteristics, the ideal carry size, and well-designed features.” 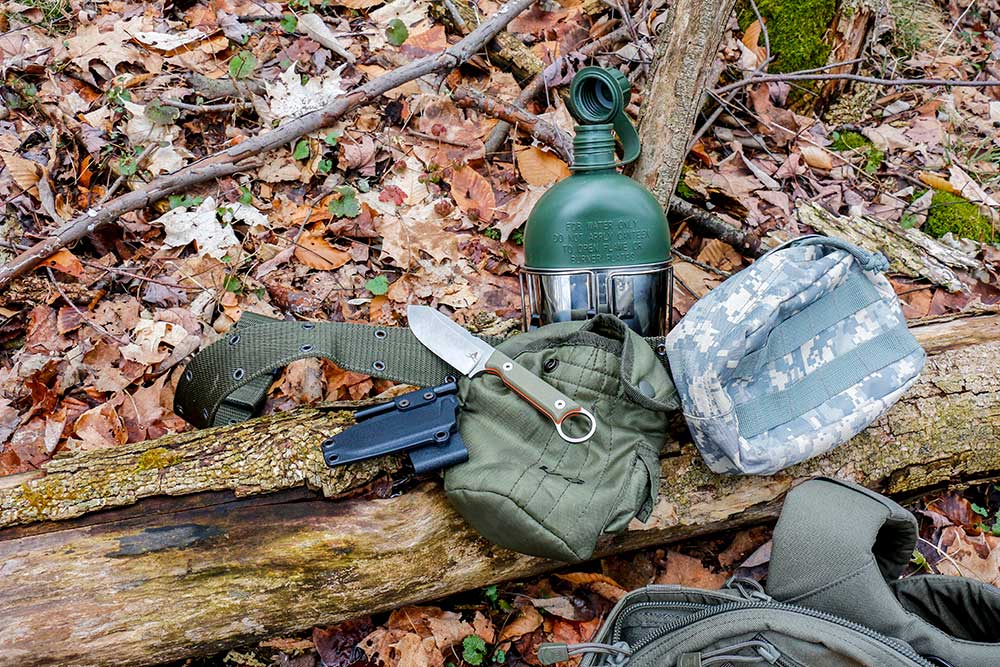 The White River Firecraft FC 3.5 Pro is a handy, versatile camping knife that could be the basis for a survival kit as well.

Jason Tietz designed this model, the smallest in the White River Knives Firecraft series. It measures 7.75 inches overall with a 3.5-inch blade of S35VN steel that’s 0.13 inch thick. It weighs 3.8 ounces; it was a bit lighter than that on my scale. Add the weight of the sheath with the included ferro rod, and the total weight comes up to about 6 ounces. 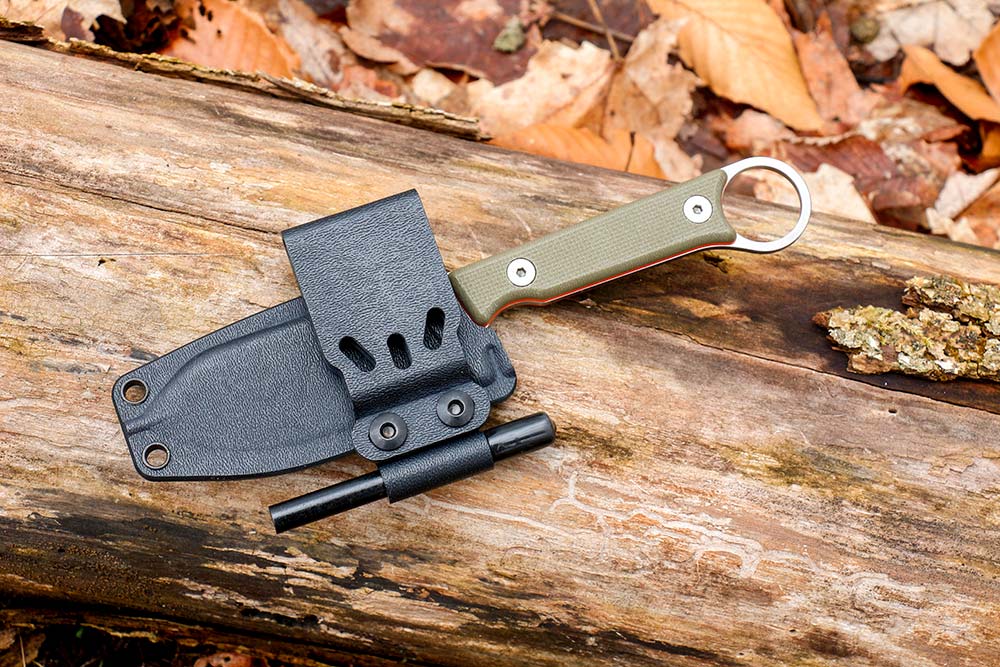 The sheath can be configured multiple ways, including vertical or horizontal carry, a 45-degree cant to either side, and right- or left-side carry.

The drop-point blade has an abbreviated tip rather than an elongated one as it starts to drop from the spine to meet the edge less than ¾-inch from the tip. It has enough of a tip to bore a shallow hole in something if needed, but no, this blade is not going to be a great penetrator. At the same time, it will excel when you want to cut something without as much of a risk of punching unintended holes in it, such as when field-dressing game. 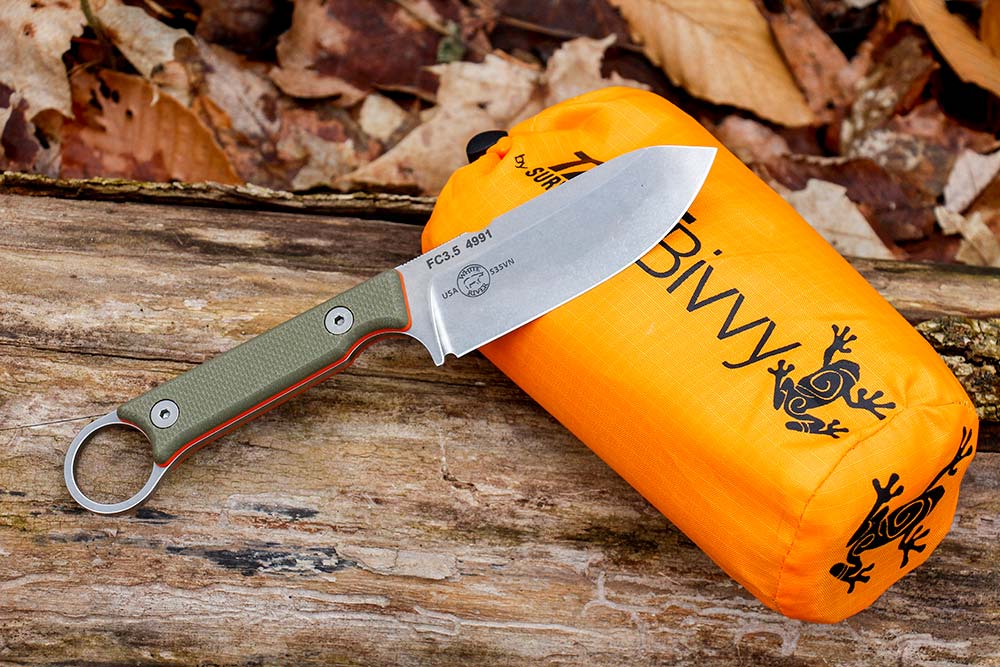 The White River Firecraft FC 3.5 Pro is big enough to get the job done, while being small enough to carry regularly.

The full tang ends with a ring, but this knife is by no means a modified karambit. The ring would work for hanging the knife on a peg board in camp or on the stub of a tree branch in the field instead of setting it down in the mud and losing it. The ring also makes it easy to attach a lanyard. I must be in the minority when it comes to using a lanyard. I enjoy fishing, camping, and recreational paddling in canoes and kayaks.

The bottoms of several lakes are littered with gear that I’ve lost overboard. I don’t want one of favorite knives to be added to the list of the forever lost. I usually just cut a length of paracord to improvise as a lanyard, and the holes on many knife designs are simply too small for that. 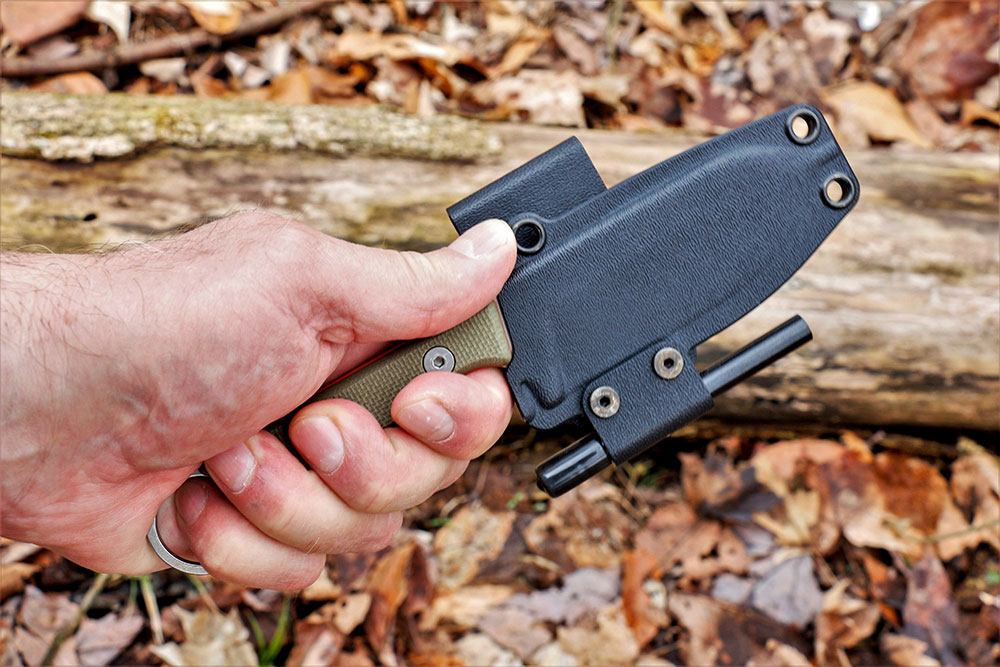 The sheath’s shape makes it easy to push it off the knife with a thumb.

The FC 3.5 Pro has contoured G10 handle scales—the ones on my knife are green over orange liners. The scales are nicely textured without being abrasive, and they’re bolted on so you can remove them to lighten the load.

The FC 3.5 Pro fits my hand very well. I’m able to get a full, four-fingered grip on the handle. There’s a finger groove for the index finger and jimping on the spine just ahead of the handle to use when taking a thumb-on-top grip. When working with this knife, I found that the round ring at the end of the tang tucked comfortably and securely into my palm when I took a more rearward grip to extend my reach with the blade. 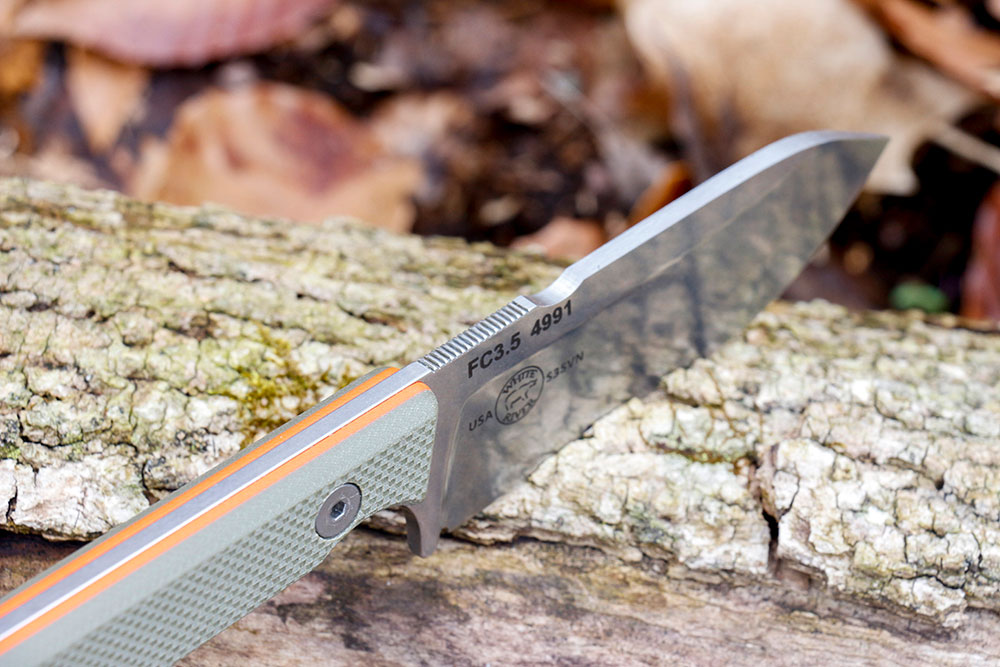 The knife’s spine has a notch that’s designed specifically to be used as a ferro rod striker. The ferro rod is included.

The Kydex sheath that comes with the FC 3.5 Pro is very well designed and executed. The bolt-on belt attachment can be configured for horizontal (scout) or vertical carry on either the right or left side. If you prefer the knife to ride so that the handle cants either forward or to the rear, you can set the sheath up for a 45-degree tilt. The knife remains in place with a friction fit—and it’s not coming out unless you want it out.

“The FC 3.5 Pro has a notch on the spine that’s designed specifically to be used as a ferro rod striker.” 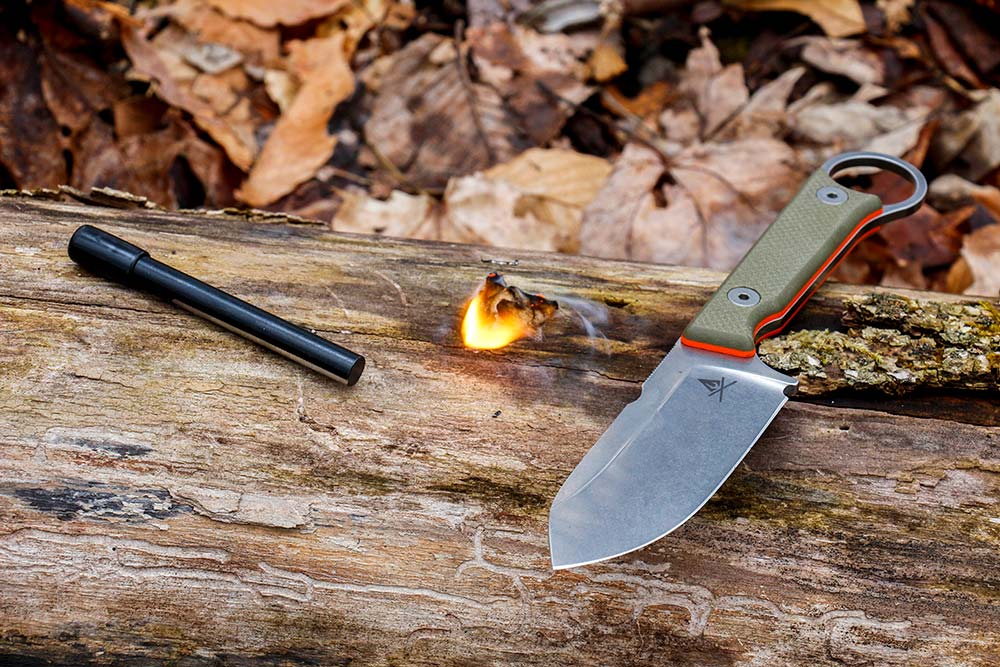 Creating fire was easy with the White River Firecraft FC 3.5 Pro, especially when you have good tinder. Here the author used a small piece of SOL Tinder Quik material.

The sheath covers the blade only, exactly the way I want it with a Kydex sheath. So, no matter where I’m carrying the knife, I can attain a full grip on the handle, thumb off the sheath, and draw the knife one-handed without needing to readjust my grip. You can remove the belt attachment if you decide on pocket or neck carry. 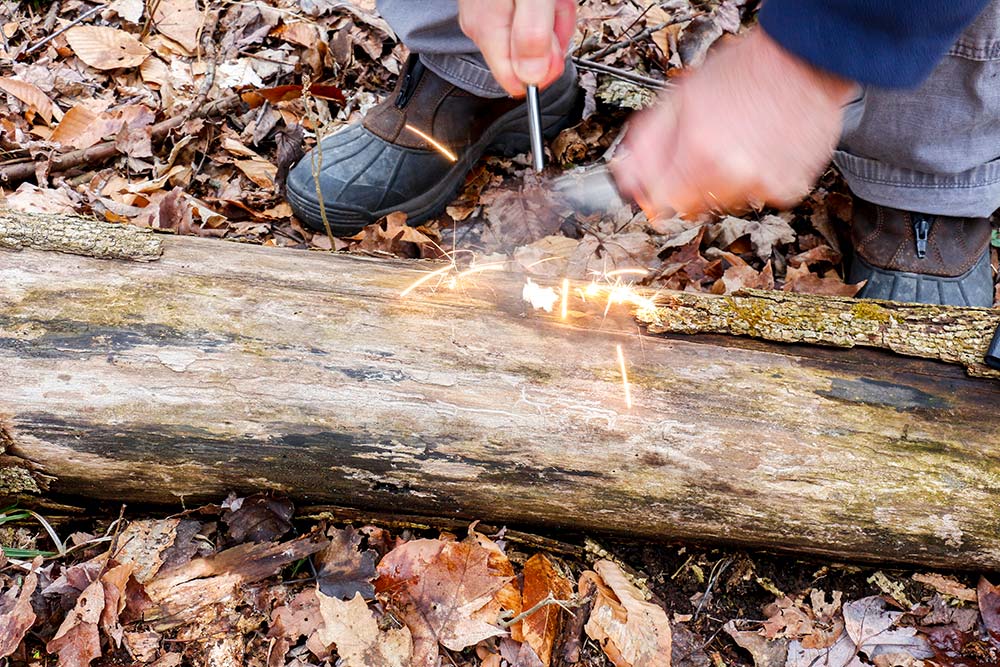 Using the notch in the spine as a striker, the author was able to generate plenty of sparks with the included ferro rod.

Right up there with a knife on the top of my list of things to carry on a hike, hunt, or take on a camping trip is a way or two to make fire. Having spent nights in the woods with minimal gear where a fire certainly saved me from hypothermia, I am obsessed with being able to make a fire. If a knife is called Firecraft, it needs to be able to make a fire, too, and this one does. The FC 3.5 Pro has a notch on the spine that’s designed specifically to be used as a ferro rod striker. 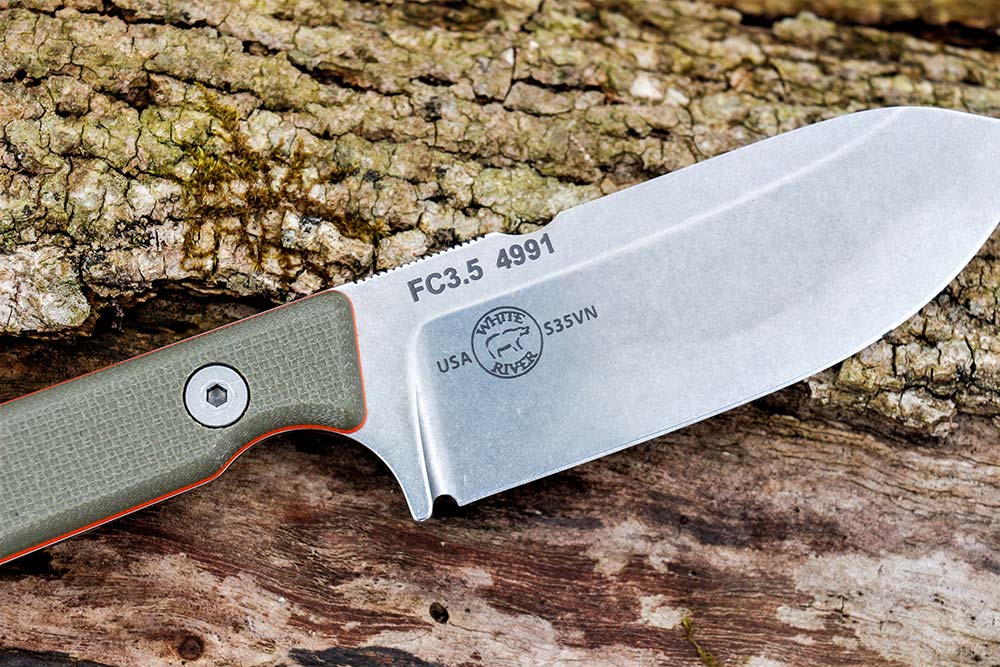 All the information you need right on the blade. It’s made of good steel by a good company in the U.S. Plus, you get the cool bear in the logo.

Appropriately, the sheath has a ferro (ferrocerium) rod loop. That loop also bolts on so it can be removed if desired. Personally, I want it there. A ferro rod 3 1/4 inches long with plastic gripper on one end is included with the knife. It fits snugly in the sheath’s loop and is not likely to slip out easily. I’m always paranoid about such things, so I will be checking the ferro rod’s status regularly and unnecessarily when carrying this knife. The ferro rod is about ¼-inch in diameter. It should last for starting hundreds of fires and isn’t likely to snap in two in normal use. While some folks keep a ferro rod for emergency backup use, I normally use one to light my backpacking stoves. 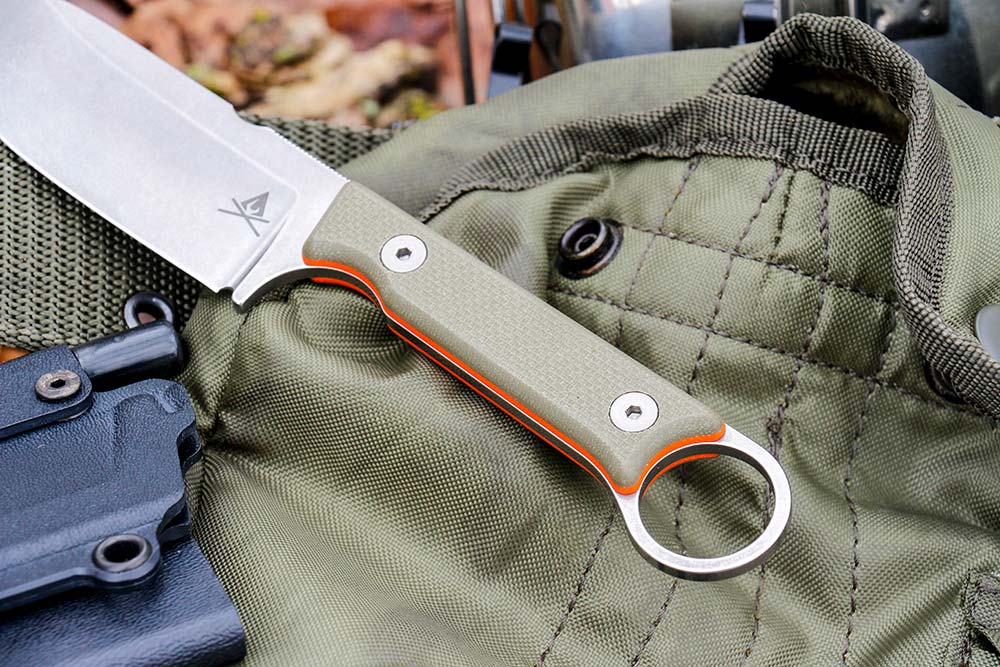 This knife is not intended to be a karambit. It comes with good G10 handle scales, and the ring fits the palm very well for a secure hold and lots of control.

I’ve found that not all ferro rods are created equal. I’m especially fond of those from Exotac and Uberleben. I test gear before I put trust in it. So, I took to the woods to see if the Firecraft would live up to its name. As with most ferro rods, it usually takes a couple of scraping strokes to wear away the protective black coating on a section of the rod’s surface. Once I did this, I was able to produce showers of sparks quite easily using the Firecraft’s spine notch against the ferro rod.

Good tinder is always important when using a ferro rod. Naturally, with this knife, you could process your own natural tinder. On this occasion, however, I used a small piece of a SOL Tinder Quik tab that I broke off and opened to expose the fibers.

In the short time I’ve had to work with the FC 3.5 Pro, I’ve become a huge fan of this knife for hiking, camping, hunting, and more. It has great handling characteristics, is the ideal carry size, and includes well-designed features. The S35VN blade has great edge retention and corrosion resistance. It arrived extremely sharp and stayed that way. 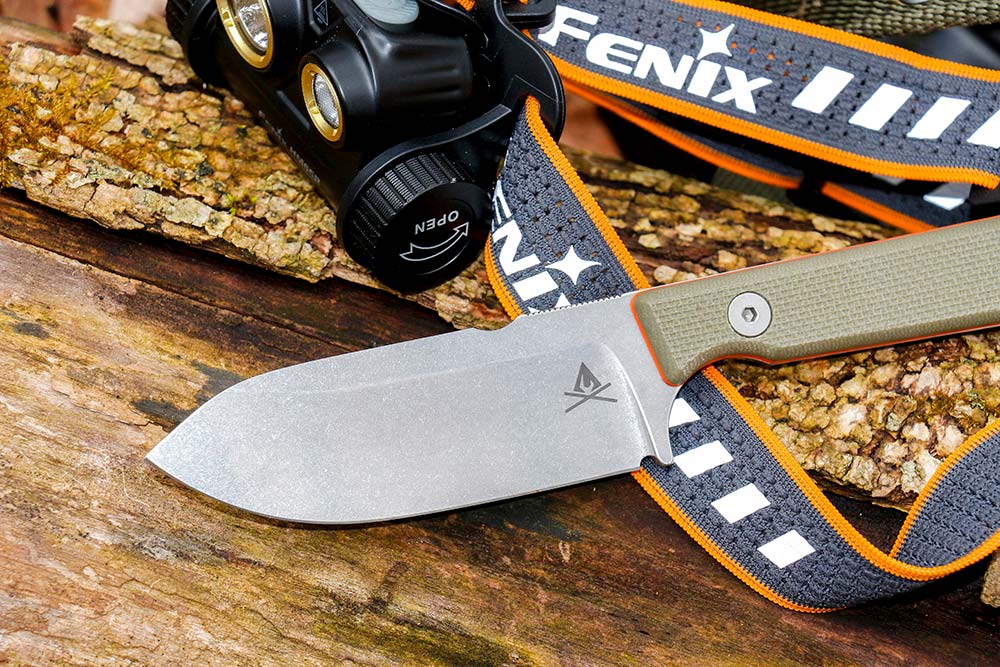 The wide blade of S35VN steel has lots of utility. Its tip is useful, but it’s not pointy or fragile.

As a big plus for me, this knife is made in the U.S. by a family-owned and operated business. Just holding this knife in my hand stirs my imagination about getting outdoors for my next adventure. I’d like this knife to be part of it.  KI

THE MANY ADVANTAGES OF THE FIRECRAFT FC 3.5 PRO

What are some of the qualities that make the White River Firecraft FC 3.5 Pro a general-purpose outdoor tool suitable for backpacking, hunting, camping, hiking, and everyday carry? 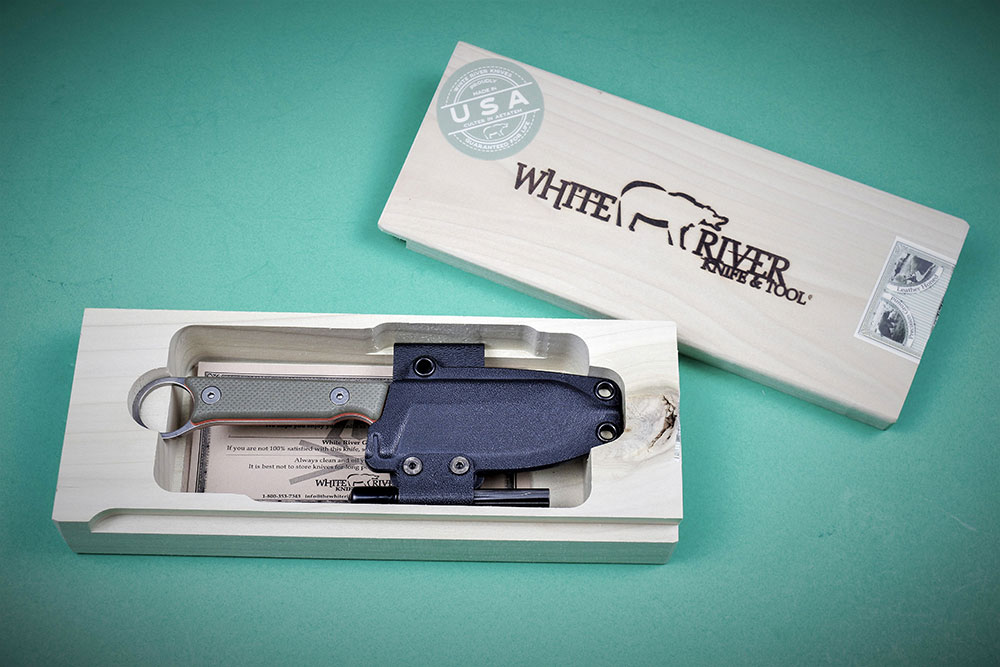 The White River Firecraft FC 3.5 Pro comes in a nice wooden box, but the author believes this knife will spend more time on his belt than in that box.

It’s lightweight (3.8 ounces) and compact (7.75 inches overall), making it easy to take with you anywhere. The sheath allows you to attach the knife to a belt or pack in numerous ways. It will fit in most pockets (if it doesn’t, you chose the wrong pants) or can be worn around the neck.

Pair a good, sturdy knife with a way to make fire, and you have a good basis for a survival kit. This knife fills that role very well.

While this knife is excellent for use when hiking and camping, don’t overlook its use as a good hunting knife with a tip that’s not too pointy.

Because the knife’s edge is on a plane below the handle, this knife is configured to be a good camp food prep blade, allowing you to slice without skinning your knuckles on the cutting board.

Because it’s likely to be the closest thing at hand and it has a nice wide blade (about 1¼ inches) for its size, you could use it at the grill as an improvised spatula, for spreading peanut butter, or just about any other camp use you wouldn’t ordinarily consider.