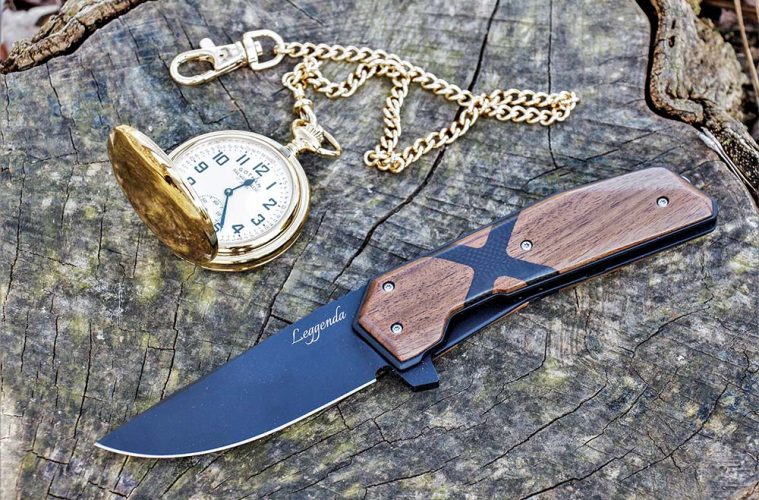 A HEAVY-DUTY FOLDER WITH A TOUCH OF CLASS

Leggenda is the Italian word for legend. While it takes time for a knife to become a legend, the Woox Leggenda has what it takes in the way of quality build, good looks, and flawless performance to be a very good knife. So, let’s just say it’s off to a good start in living up to its name.

NOT MY FIRST WOOX

I was looking forward to getting my hands on the Leggenda. Last year, I reviewed the Woox Forte Axe and was very impressed with that brute of a mid-sized axe in an age when more products in that arena tend to be built to be slim and lightweight rather than heavy duty, real-world performers. 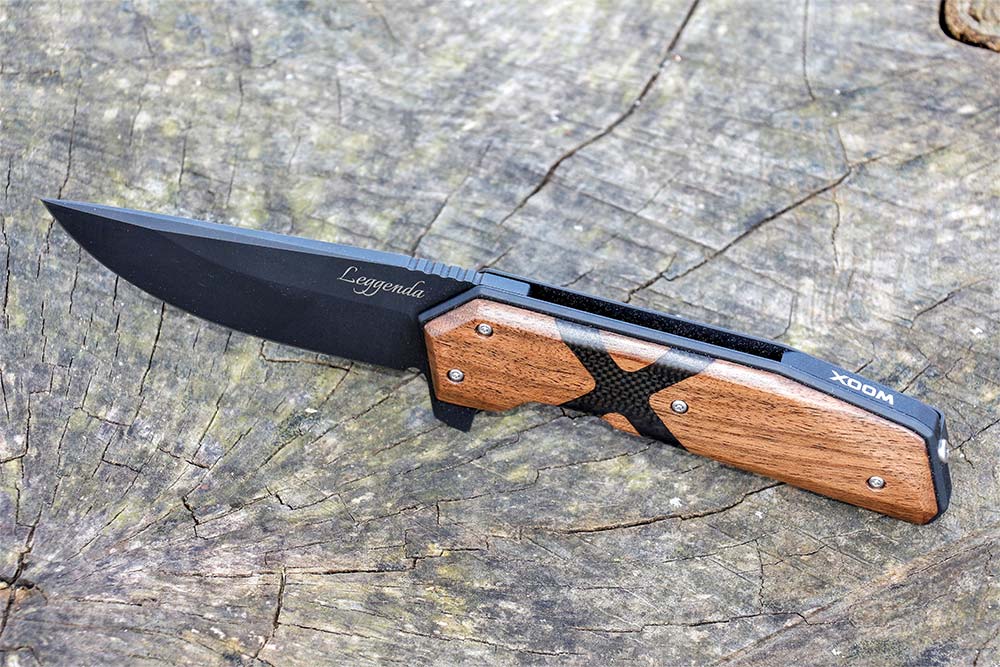 The Legenda is not a small knife, with its 3½-inch blade and 6.14-ounce weight. But sometimes you want some size and weight behind your cuts.

Likewise, the Leggenda is a sturdy knife built to be a workhorse. It’s no lightweight at 6.14 ounces, despite the use of carbon fiber liners. But many times, you want a bit of heft behind your cuts.

“With the Leggenda, you have a working tool that comes with a certain pride of ownership because it doesn’t look like every other bland EDC knife…”

The Leggenda’s blade is made of rugged D2 steel and measures 3½ inches long and a beefy 0.17 inches thick. The shape of the blade is one of the things I like the most. When it comes to the tip of a blade, I prefer the middle ground. I don’t like my drop points to drop too much, and I don’t like my clip points to be too upswept.

The slight swedge running along the blade’s spine toward the tip gives the Leggenda the appearance of being a clip blade but without the fragile tip that many true clip-point blades have. 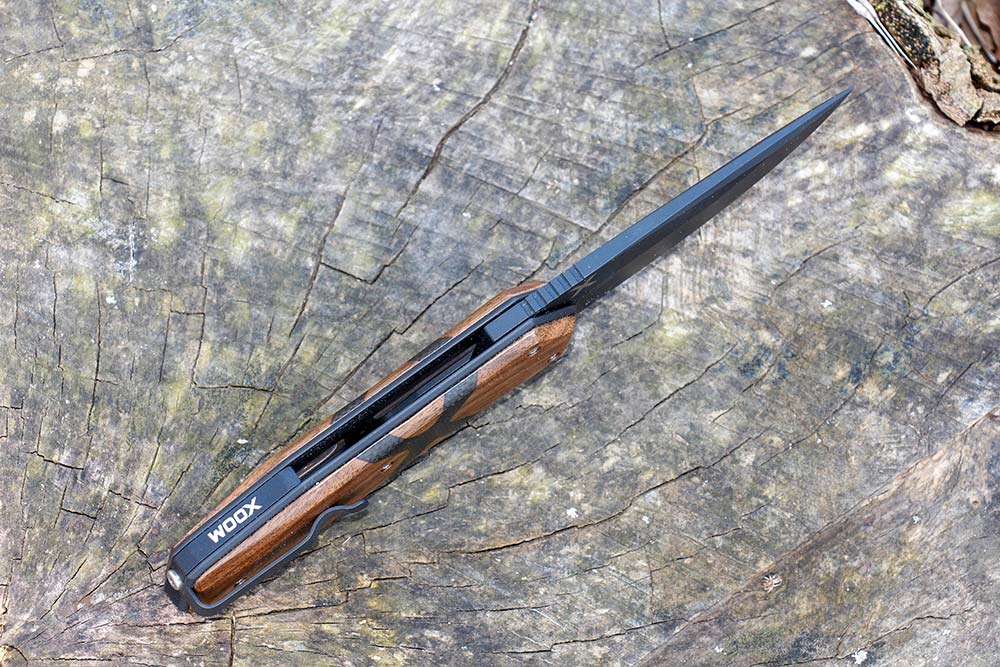 The back of the Woox Legenda is partially open, which helps to keep lint and other debris from building up in the mechanism.

Some jimping on the rear of the spine works as a thumb hold. A small choil behind the edge will give you a bit of space to make it easier to sharpen that part of the edge closest to the handle where much of your detail work is accomplished. The blade has a matte black finish.

“Belt carry is a nice option to have with a knife this size, especially when pocket space is at a premium with all the other things I like to carry…”

There’s a generous flipper, wide and high enough to facilitate opening the blade one-handed quickly, even under stress, with either hand. The blade glides smoothly over an IKBS (Ikoma Korth Bearing System) pivot. As with other flippers, this one doubles as a protective and reassuring finger guard when the blade is open. That blade locks securely open with a liner lock that provides plenty of engagement. 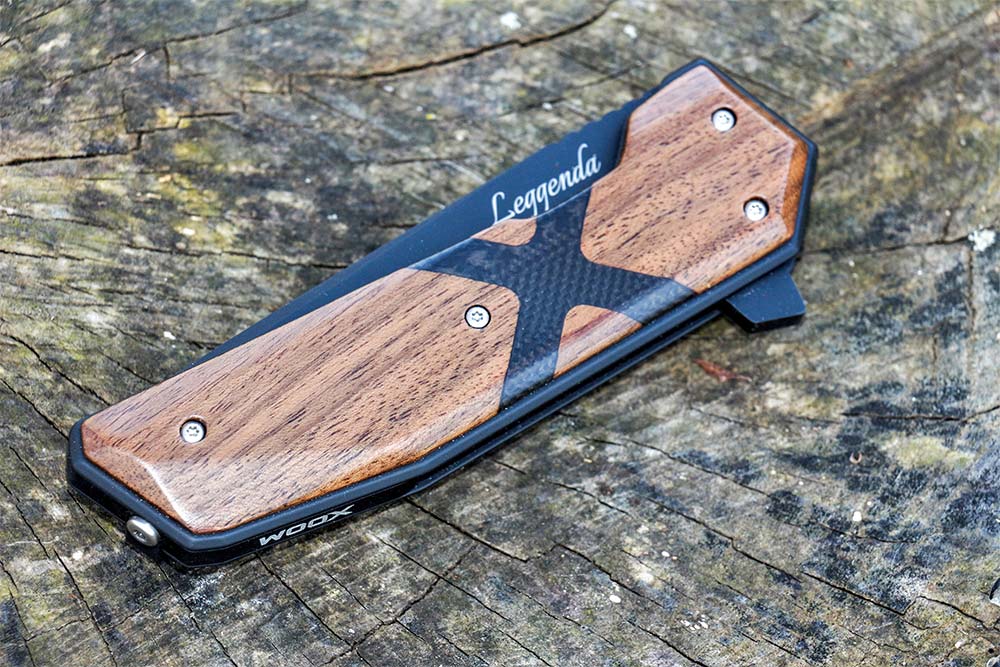 Closed, the Legenda measures 4¾ inches long. Its size means it probably won’t disappear in your pocket, but it might be reassuring there.

The handle is very important on any knife. A good handle provides a secure grip without being too aggressively textured, is shaped to feel natural in the hand—not awkward—for control of the knife when making various cuts, and is comfortable to use. It’s a bonus when such a handle is crafted to add a measure of beauty to the knife’s appearance.

The handle of the Leggenda consists of several straight edges angled to form its shape rather than using continuous curves. Those straight lines are beveled nicely, so there are no sharp or rough areas anywhere on the frame.

The handle scales are smooth walnut—so smooth that, at first glance, I thought the scales were plastic. But they are, indeed, wood. The scales taper toward the rear and contribute to the handle feeling very comfortable in the palm. A cutout on the left handle scale allows easy access to disengage the liner lock when closing the blade. It also serves as a finger groove when holding the knife. 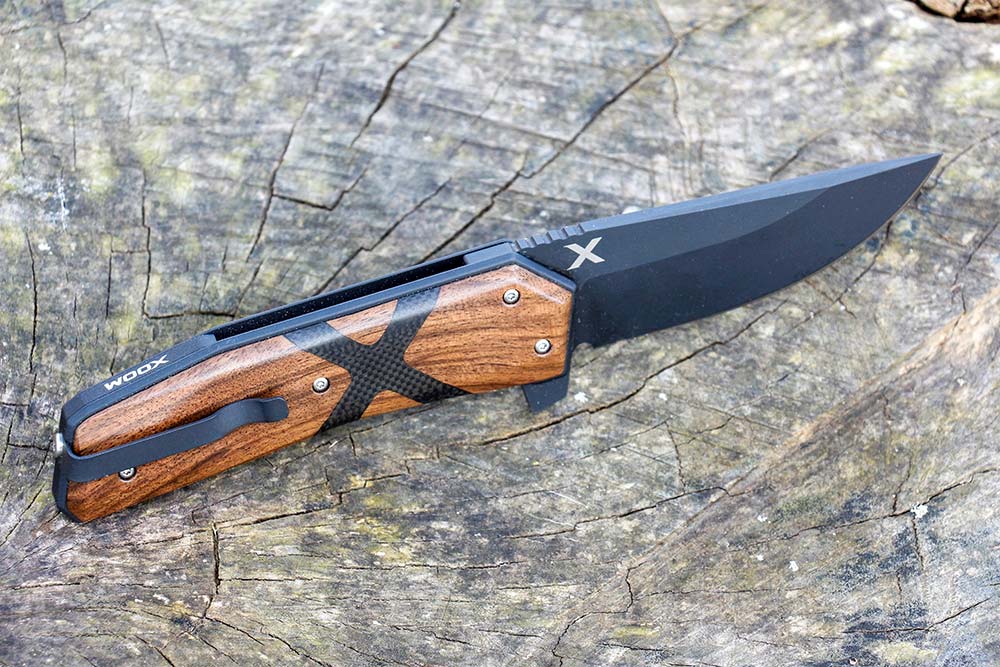 The Legenda has a beefy blade, 0.17 inch thick, with a slight swedge on the spine near the tip. It’s made of D2 steel.

Each of the scales connects to the frame with four stainless steel Torx screws, and a matte black stainless steel deep-carry pocket clip attaches to the rear of the frame spacer with a single Torx screw. That clip is reversible and configured for tip-up carry only. The frame spacer covers a bit more than a third of the back of the handle but leaves enough open space to prevent lint and other debris from being trapped in the mechanism. The Woox logo appears on the back of the spacer.

As usual when I’m testing a knife, I hunted around the house for any materials that would make good contenders for turning big pieces into little pieces. I opened packages, cut cardboard for the recycle bin, sharpened pencils, cut rope and nylon webbing, and sliced carrots. When out for a leisurely walk, I’d stop periodically to whittle sticks.

The Leggenda cut well and looked good doing it. I split my time carrying between tucking it into a pocket and using the available leather sheath ($39) that holds the Leggenda for horizontal belt carry. Belt carry is a nice option to have with a knife this size, especially when pocket space is at a premium with all the other things I like to carry regularly. 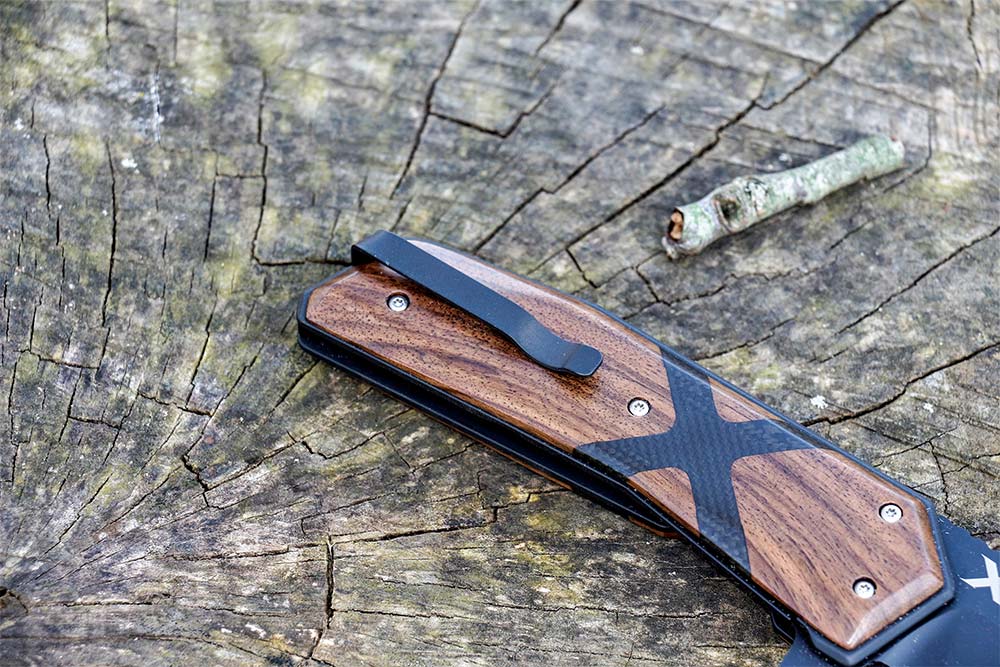 The Legenda has a deep-carry reversible pocket clip configured for tip-up carry.

Woox, with manufacturing facilities in both Italy and the US, has done a fine job with the Leggenda. Ultimately, a knife is a tool, and the Legenda is a good one capable of doing whatever you need. It can fill the everyday carry role very nicely. It would also make a good companion to a Woox axe or hatchet for chores around camp.

At the same time, there’s a satisfying feeling about carrying a knife that looks as good as it performs; one that’s a bit classy without being phony or flashy. With the Leggenda, you have a working tool that comes with a certain pride of ownership because it doesn’t look like every other bland EDC knife when you take it out of your pocket.  KI 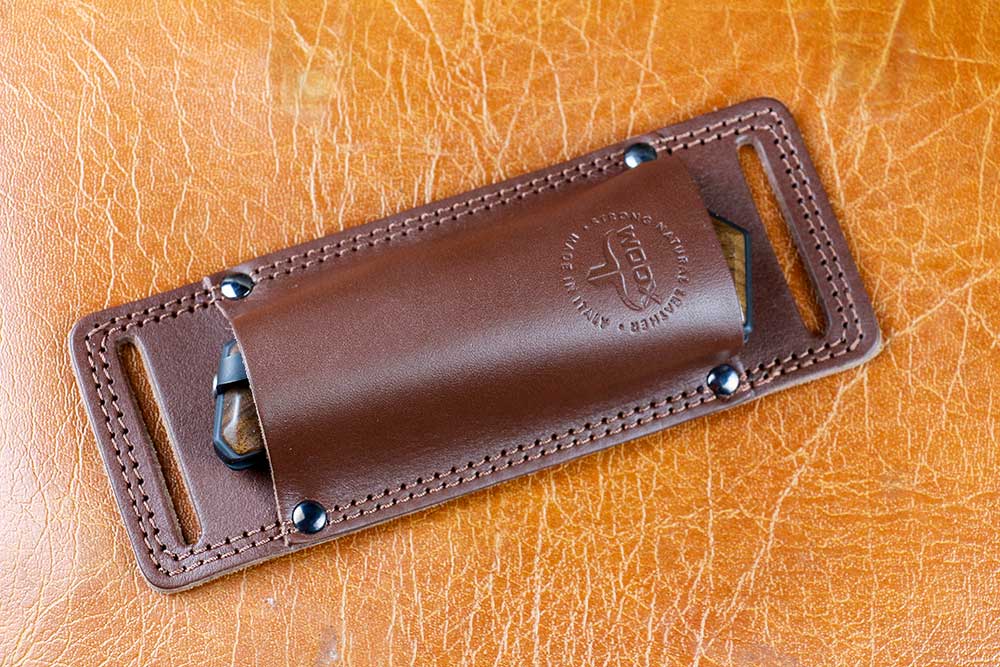 Woox offers a leather sheath that holds the Legenda on the belt in a horizontal position. 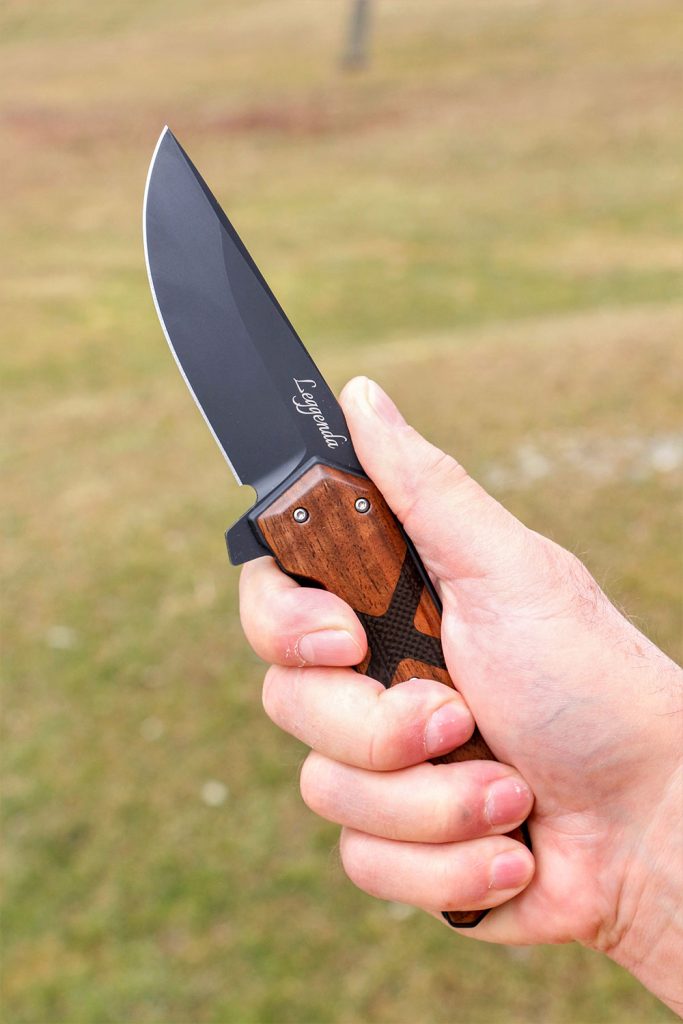 In the hand with the blade open, the flipper forms a guard and the cutout in the handle for lock access also serves as a finger groove. 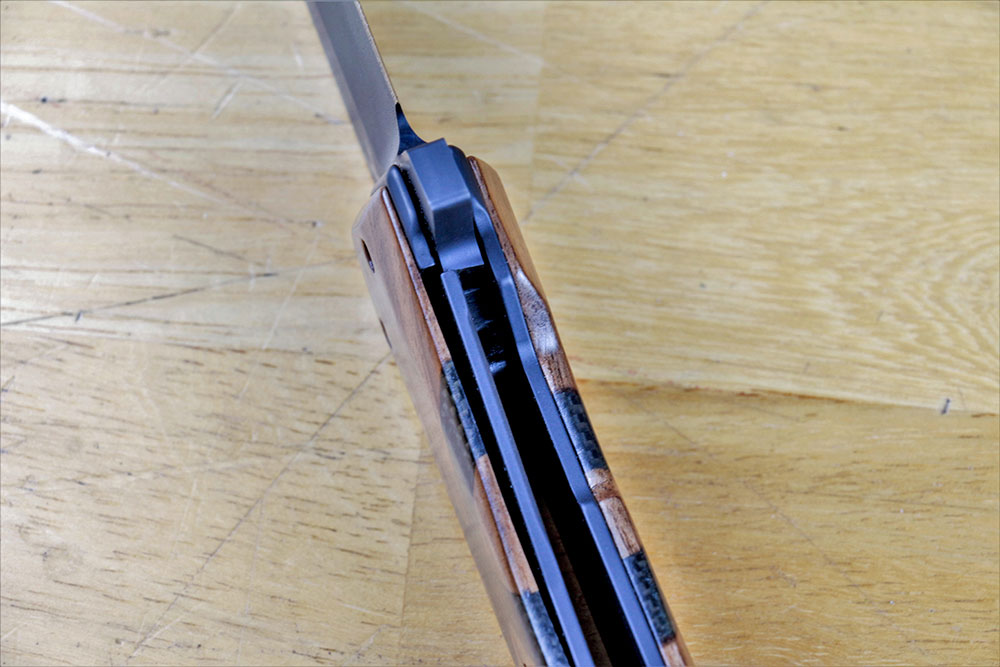 A liner lock is simple and effective when executed properly. The Legenda’s lock clicks in nicely with good engagement. 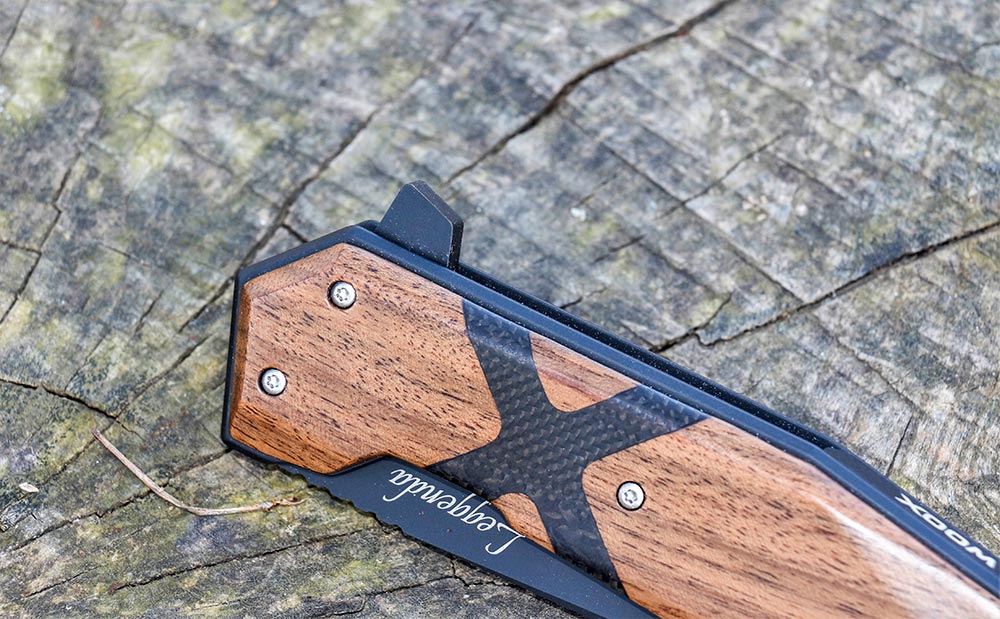 The flipper is prominent enough to provide sure-handed, fast deployment of the knife blade with either hand, even under stress. The Legenda does a great job at most any cutting task you can throw at it. 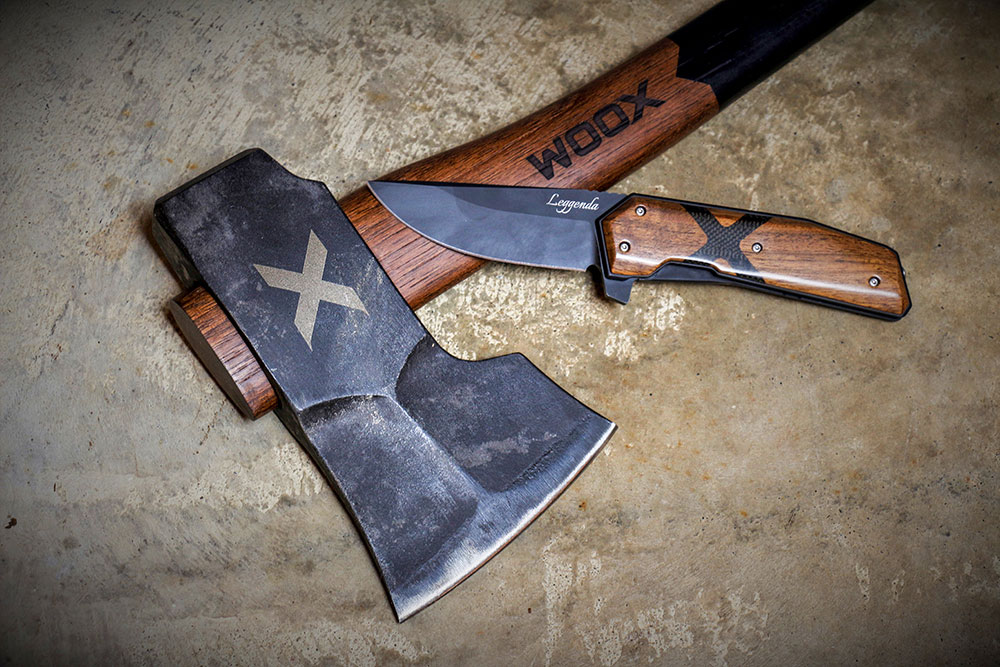 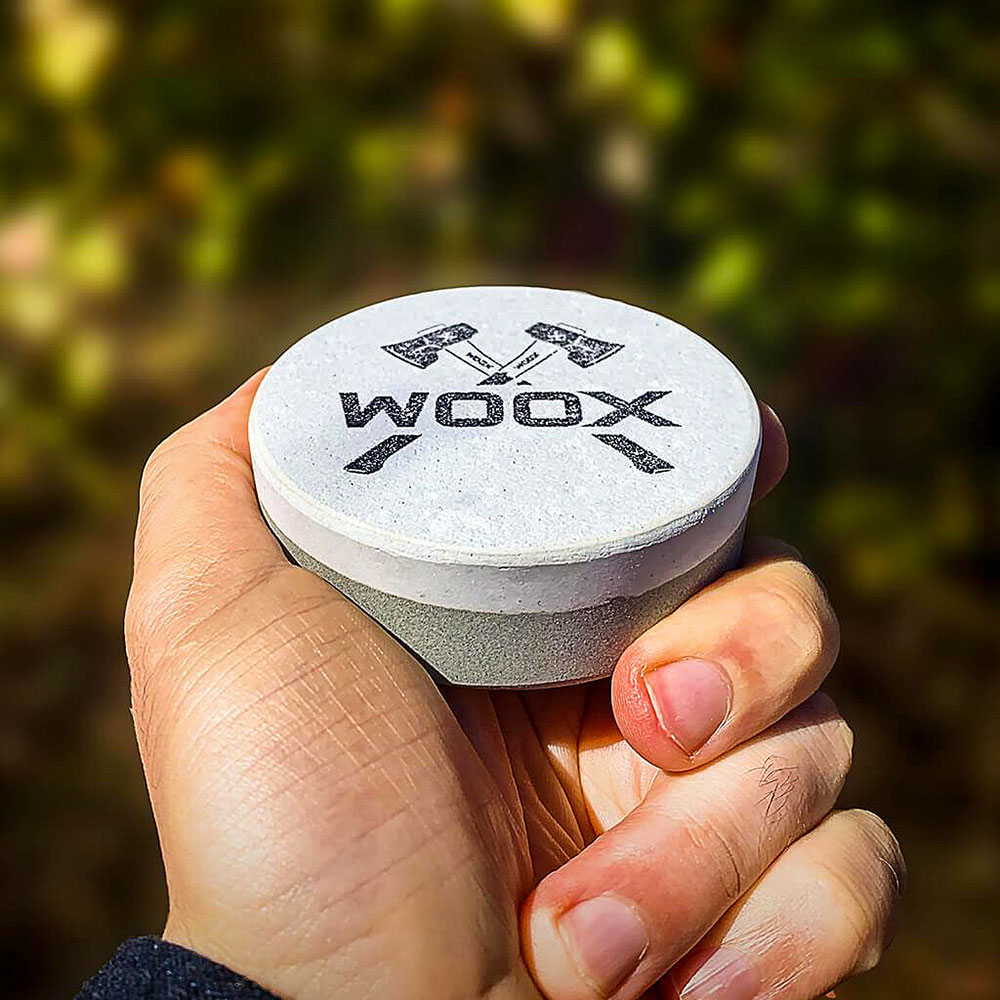 The Woox Professional Whetstone Disk is a puck-style sharpener than can be used for sharpening both your axe and your knife. Woox photo.

LOOK AT THESE OTHER WOOX PRODUCTS

Aside from the Legenda, Woox offers the Forte Axe with 22-inch handle and Forte-X with 28-inch handle. If you want a hatchet-sized chopper, Woox makes the AX1 and Volante models. The company also makes the Rock 62 fixed-blade knife with 4¼-inch blade and several handle options. If you’re a shooter, you should know that Woox offers some beautiful custom drop-in stocks for precision rifles too.