Slicing The Air with Sabertooth

Combat knife thrower Jason Willard Johnson burst on to the scene via YouTube back in 2015 when he posted a video of himself throwing a knife through a soda can he tossed downrange, pinning it to the target from 20 feet away.

It generated a buzz in the knife-throwing community and in the general knife community alike, as people shared the footage and even attempted the stunt themselves. A friend of mine was in contact with Jason and introduced us, since we both hail from Omaha, Nebraska. It wasn’t long before Jason and I met up at one of my Martial Blade Concepts classes.

We hit it off right away and found we had a lot of common interests, especially knives. Since then, we have trained together on several occasions, exchanging ideas and methods and talking all things knives at every opportunity.

In April of 2018, Jason competed on The History Channel’s “Forged in Fire: Knife or Death” with a standout performance that introduced him to a broader audience, furthering his career and solidifying his reputation as a skilled knife expert.

Recently, Jason revealed to me that he designed a knife all his own and it will soon go into production with M3 Tactical Tech. Jason had a working prototype on hand and was kind enough to allow me to borrow it for testing and evaluation.

Jason was quick to say, “It’s a live edge knife that can be thrown,” pointing out that the Sabertooth is more than just a dedicated thrower.

The working prototype I borrowed for this article was crafted by knifemaker and former “Forged in Fire” winner, Travis Wuertz as a favor to Jason to help him bring his design to life.

While Jason and Travis were familiar with one another’s work, the two first met in person on the set of “Knife or Death” where Wuertz was serving as a co-host and blade expert tasked with evaluating the knives each contestant brought to compete with.

The Sabertooth prototype is made from 0.300-inch-thick 52100 steel. Travis used this steel to test the heat treat and overall design and performance of Jason’s design. It features a 6 5/8-inch tanto-style flat ground blade with an overall length of 12.847 inches. The expertly crafted handle slabs are made from beautiful blue G-10 and are mounted to the full tang blade via brass pins.

The highly polished steel blade retains some of the steel’s original texture just below the spine. This contrast in textures coupled with the sleek look of the handle slabs and pins makes for one gorgeous blade.

The prototype enabled Jason to make the final adjustments to his design, preparing it for the production version that M3 Tactical Tech will offer to the public. (Editor’s note: See the finished M3 Tactical Tech measurements in our sidebar.)

As I began to work with the Sabertooth, I immediately noticed how balanced and robust this knife felt in the hand. Jason was quick to point out the many details he designed into the Sabertooth that not only made it a fully functional knife for everyday use, but that also set it apart as a knife that can be thrown, if ever pressed into service as a defensive weapon.

Design in the Details

The Sabertooth has a recessed section along the spine just above the ricasso where the user can place the thumb for better control when using the knife as a tool. On the handle belly, another recessed area is found where you would typically see a choil.

This recessed section also happens to be right where the Sabertooth’s natural point of balance is located and makes finding the initial purchase on the handle a breeze. 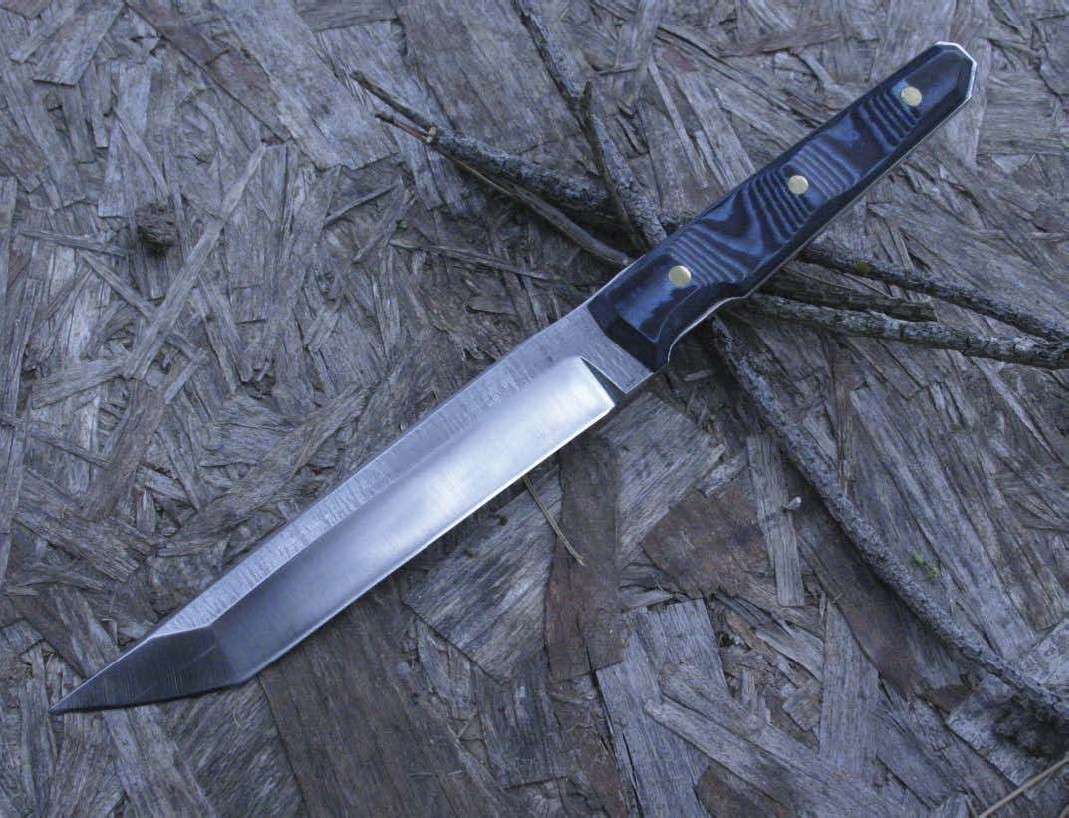 Jason Johnson’s Sabertooth design is a departure from tradition. It is a fully functional knife with a razor-sharp edge, that can also be thrown.

The handle, as you move back toward the finger recess, tapers then flairs then tapers down again at the pommel. This feature was inspired by the shape of the human hand, allowing one to grip the handle completely and squarely.

I was quite familiar with this concept having trained in an edged weapons system that favors a modified Filipino grip where the emphasis is placed on a secure grip that ensures maximum control. Jason’s unique pommel design, with angled corners, assists in both bushcraft and throwing applications.

Even the handle scales have purpose-built features. To prevent damage to the handle scales, Jason recessed and beveled the scales. These attributes also contribute to grip and proper delivery when throwing.

The spine of the Sabertooth was designed by Jason with a 30-degree crown, which he says aids in penetration when throwing, but is also useful in bushcraft.

In a survival scenario, the tapered spine allows the end-user to reduce or avoid prematurely dulling the blade while performing tasks around the campsite. The spine can be used to crack open nuts and other food sources, break small rocks, and to strike a ferro rod to produce sparks for fire-making.

In addition to the beautiful prototype, Jason was able to supply me with two Sabertooth production models made by M3 Tactical Tech. They clearly had already been through some serious testing and evaluation when I got them.

I wasn’t about to take any chances throwing the prototype, but with the production models, I was able to throw them with confidence to get a better feel for their design and application.

I always enjoy putting a new knife through its paces by cutting a variety of common items found around the garage. This helps me establish a baseline and since this knife is intended to be a used for common tasks first, with throwing being a secondary application, I went to work cutting corrugated cardboard and multiple strands of paracord.

The cardboard put up very little resistance as the Sabertooth bit into the material and sliced cleanly through to the other side with little effort, leaving several pieces of cardboard on the floor in quick succession. I cut through multiple strands of paracord with one stroke of the Sabertooth.

Next, I placed a few sections of the paracord on a cutting board and was able to press down and slice cleanly through all of them.

Jason wanted to go a little further, so we got together at his workshop where he had several large sheets of ¼-inch-thick rawhide leather. We took turns slicing through the leather and it felt nearly effortless.

Jason held up a strip of the leather one hand while he made several rapid slices, cutting smoothly through with each pass as thick pieces of leather began to sprinkle down to the floor.

Next, we moved on to a 2-inch-thick phonebook. The Sabertooth took off the corner with a single pressure cut and performed several more cuts with ease. It still was able to shave the hair off his arm afterward.

Each Sabertooth will come with a Kydex sheath handcrafted by Matt Nichols of Grizzly Outdoors. It’s a variation of Matt’s Elite Sheath modified to fit Jason’s needs. Matt is a one-man shop with a focus on high quality, which is something I think most in the knife community can appreciate.

The Sabertooth sheath from Grizzly Outdoors has mounting eyelets that work with multiple belt loop styles in addition to milled slots for added mounting options like packs or mole gear.

The Sabertooth deserves a place in your go-bag, survival kit or hunting gear. It is the culmination of years of training and research by someone passionate about their craft. Jason Johnson has produced a uniquely practical and decidedly wicked dual-purpose knife for the apocalypse.