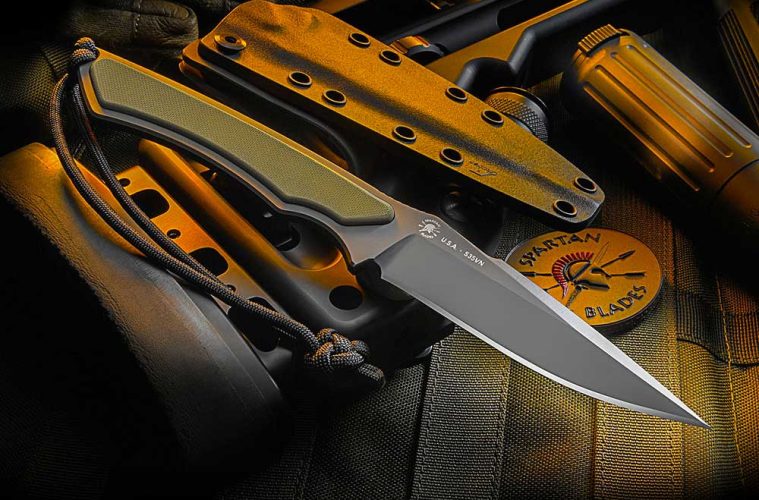 Let’s get something out of the way, right up front. Tactical, as the term is used in the knife industry, is really nothing more than a marketing term. As a very general rule of thumb, it refers to knives that have a distinctive military appearance. Manufacturers began using the term because it called to mind hard men pulling off impossible missions.

While the majority of buyers might face nothing more dangerous than a weekend camping trip, there’s still something to be said for buying high-quality knives that are meant to be used and abused. 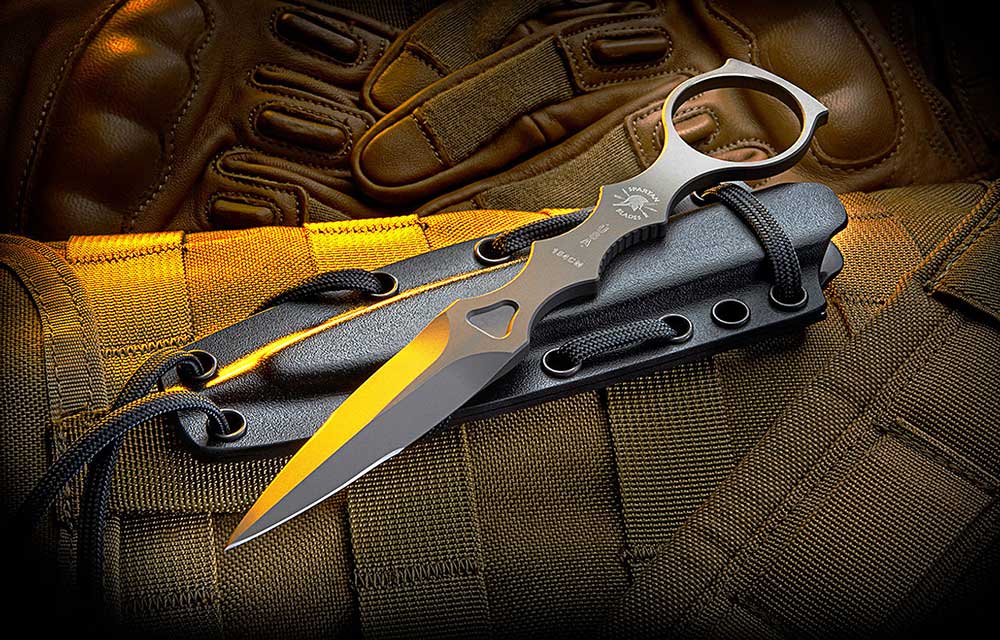 This is the CQB Tool from Spartan Blades. Truly built for real-world use, it is an excellent option for telling people to get off of you. Spartan Blades photo.

WHAT MAKES A KNIFE TACTICAL?

As it is generally understood, a tactical knife is one that is designed for rough use but that also has defense capabilities. If we’re being honest, virtually any knife could be used as a weapon, but a tactical knife is purpose-built with that in mind.

Common features of a tactical knife include dark or subdued colors and a textured handle that provides a positive grip even when wet. The handle material is often G10 or some flavor of Micarta. The blade, in fact the entire knife, is non-reflective, often black from end to end.

The sheath is also typically dark-colored and is often Kydex, though leather is also common. 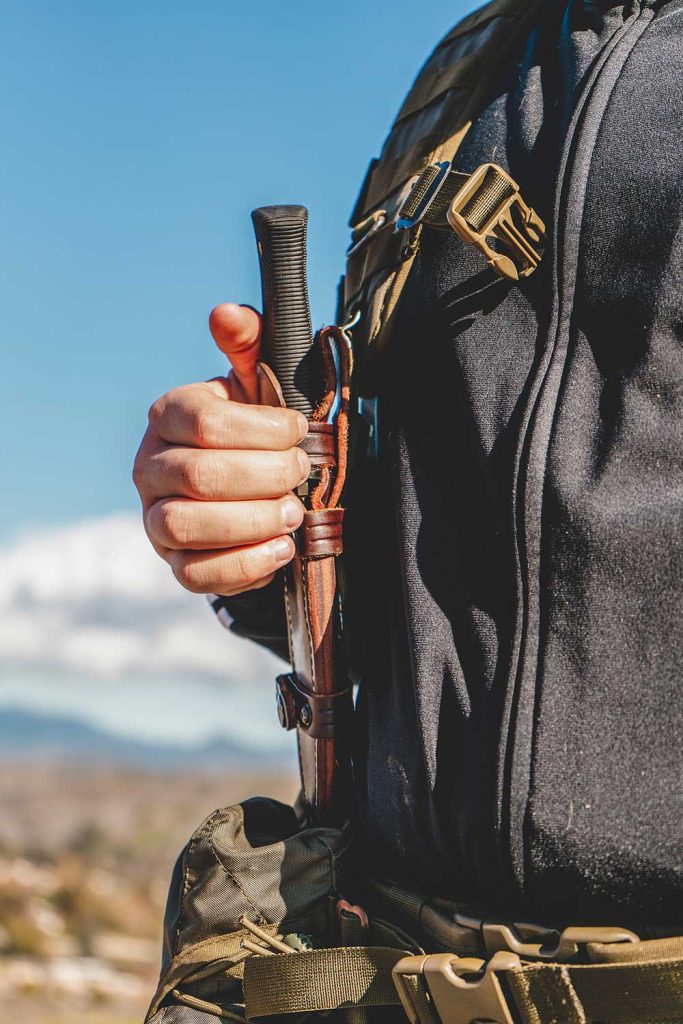 This is like those logic puzzles many of us hated in school. What it boils down to is this: Pretty much all combat knives are tactical, but not all tactical knives are designed primarily for combat. I know, we just said that a tactical knife is built with defense capabilities in mind. However, that’s not the same as saying that a knife is designed specifically for combat.

Here, let’s look at a couple of examples to illustrate what I mean. Joshua Enyart (GrayBeardedGreenBeret.com) is a former U.S. Ranger as well as a former Green Beret.

In my conversation with him about tactical knives, he mentioned that one of the blades he relied upon in his career was the CQB Tool from Spartan Blades. It is a ring dagger that is designed to be an excellent, “get the hell off of me” tool, while allowing the user to transition back to a primary weapon without dropping it. Make no mistake, the design of this knife is specifically self-defense oriented. You’re probably not going to grab the CQB Tool to open your mail or cut cordage. 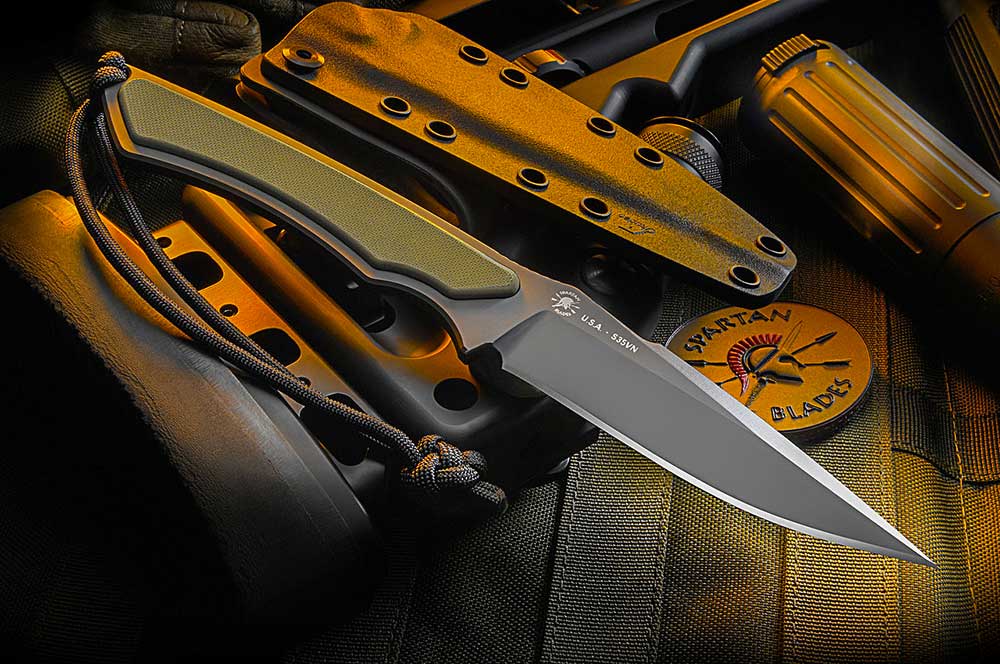 This is a great example of an all-purpose tactical knife. The Phrike from Spartan Blades works great at any number of chores, including saving your life. Spartan Blades photo.

On the other hand, take a look at the Phrike, also from Spartan Blades. With its subdued colors, non-reflective coating and slim lines, it could absolutely serve as a defense weapon. However, at the same time, it is a great option for an overall EDC knife, handy for everything from food prep at lunch to processing countless cardboard boxes.

“Make no mistake, the design of this knife is specifically self-defense oriented. You’re probably not going to grab the CQB Tool to open your mail or cut cordage.”

Both of these are definitely tactical knives, though only one of them is designed specifically for combat as its primary purpose.

On the subject of knife fighting, Enyart says, “What has to be understood is that knife fighting in combat is extremely rare. The common misconception is that a big tactical blade is necessary, but in the end, that is just a bulky, unnecessary weight on your side that does little more than open MREs and mail—deployment after deployment. 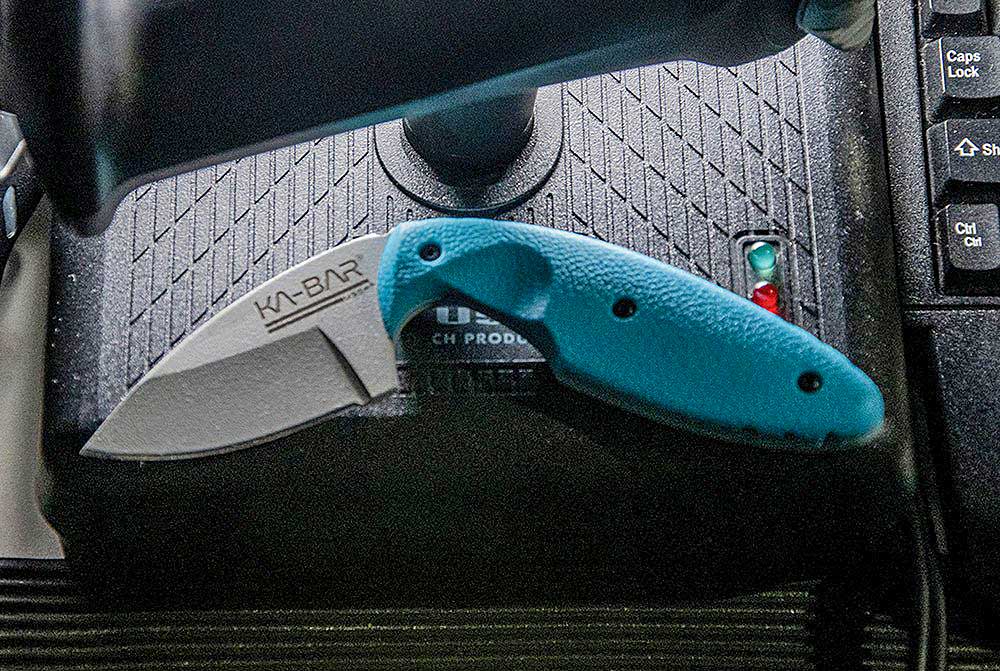 The TDI from KA-BAR is a popular choice among law enforcement officers. For those needing a knife that can be a workhorse as well as a defensive option, it is an excellent choice. KA-BAR photo.

“I think of a tactical knife as a quaternary weapon,” he continues. “The carbine is the primary means of engagement and you do that from as far away as the situation allows. The sidearm is secondary and typically only used as a transition when the primary goes down.

Tertiary would be hand-to-hand, usually because you were surprised or the carbine went down, followed by the pistol going down or being so close the operator is grabbed. The combat knife, practically speaking, is used in that hand-to-hand grapple to create space to allow for the use of the sidearm again.

Nobody slings a rifle, holsters a pistol and draws a knife to have a good old-fashioned martial arts-style knife fight in combat.”

OK, SO WHAT’S A TACTICOOL KNIFE?

The term “tacticool” is obviously a play on “tactical” and refers to knives and other equipment that are better left for the mall ninjas and keyboard commandos. In other words, they are neither practical nor realistic, though admittedly they may still have some limited aesthetic appeal.

Brian Duff is a former member of the 75th Ranger Regiment. He went on to become director of training for North American Rescue’s tactical medicine training program. He’s the creator and host of the Mind4Survival podcast and website (Mind4Survival.com). He defines tacticool as, “…equipment without a purpose other than to look cool. As a result, tacticool knives are gimmicky, flimsy and unreliable.” 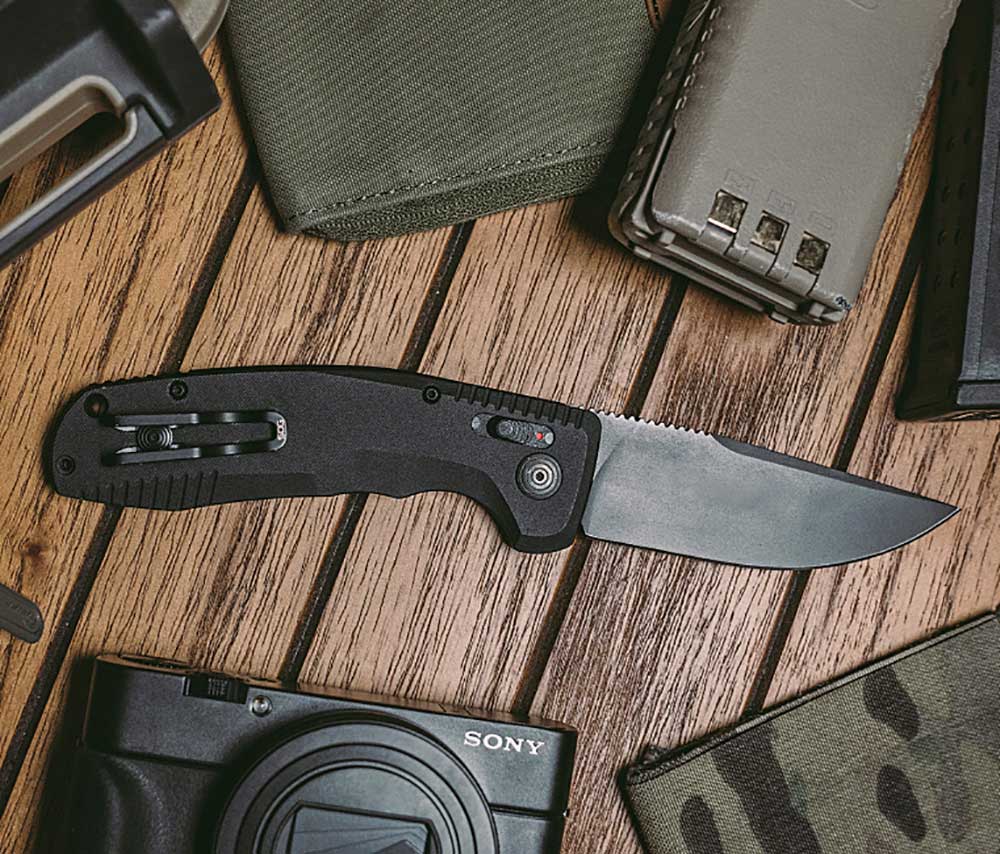 To be fair, I’m not a “use your stuff” kind of knife guy. It takes all types to keep the knife industry afloat and there’s nothing wrong with buying a blade simply because it is eye-catching. However, there’s a difference between purchasing a cool knife to hang on the wall and buying one that you plan to truly use.

Tacticool knives are usually cheaply made with inferior components, destined to fail under pressure. Sure, they look all sorts of whiz-bang awesome, but when the chips are down and you truly need to rely on a knife for safety, security, or survival, you don’t want to try counting on some ridiculously designed piece of garbage.

WHAT TO LOOK FOR IN A TACTICAL KNIFE

If you’re in the market for a knife of the tactical variety, there are some things to consider before plunking down your hard-earned cash.

Chief Jim Hansen has been in law enforcement for well over 30 years, rising from patrol officer to Chief of Police. He said that when he selects a tactical knife, first and foremost he carefully considers the type of work he expects the knife to perform, as that will determine the knife’s size, handle material, and more.

He shared with me that many of his officers carry the KA-BAR TDI Astro MP. This is a fixed-blade knife, but one that has a 90-degree angle between handle and blade. Officers tend to carry it at the front of their belt, on the strong-hand side, for quick access.

The knife is used for everything from cutting seat belts at accident scenes and slicing clothing during rescue calls to processing crime scenes and even self-defense. 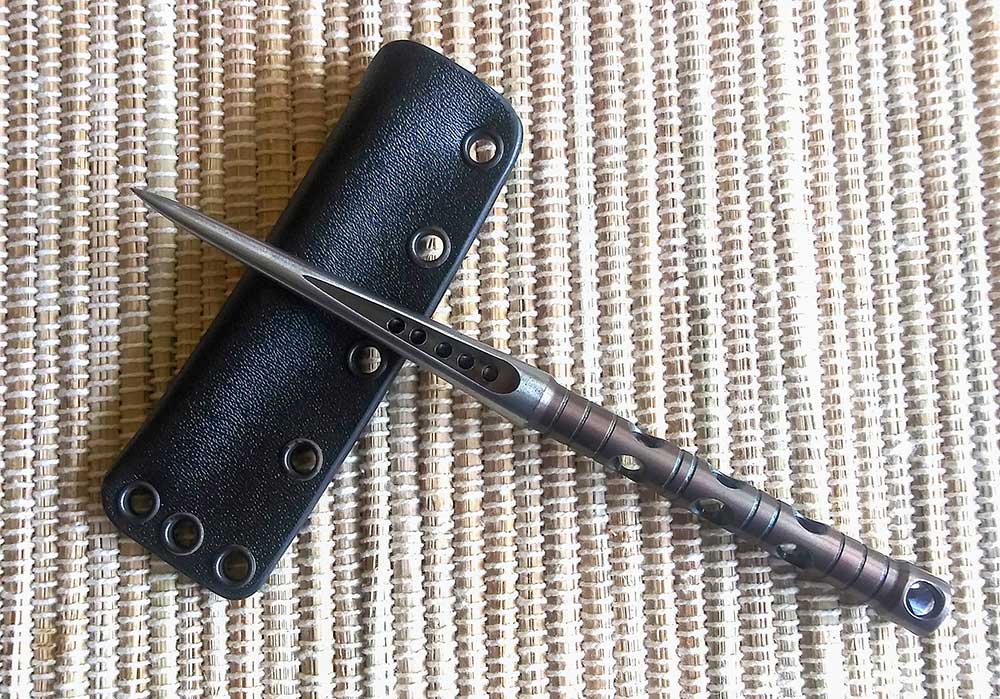 One might argue that spikes could fall into the tactical category, such as this one from Spikes by Mike. Author photo.

When I asked Joshua Enyart what he looks for, he replied, “…the best features I look for in a combat knife are that it can be worn center of the body and reached with either hand from virtually any position; it has an easy grab-and-retain handle that allows me to also grab my pistol when the space permits without losing control of either in a dynamic ground fight; it’s a dagger-style that is sharp on both sides so it’s effective no matter which way I manage to squeeze in a slice or jab; and it has positive finger grooves and jimping so that when I thrust with it, my hand doesn’t slide up on the blade and risk cutting myself.”

Brian Duff said that he has three primary features he looks for in a tactical knife.

On top of all of that, you want a knife that’s comfortable to use in a variety of grips. How ergonomic is the knife? If it is awkward or uncomfortable, you’ll find reasons to leave it at home. 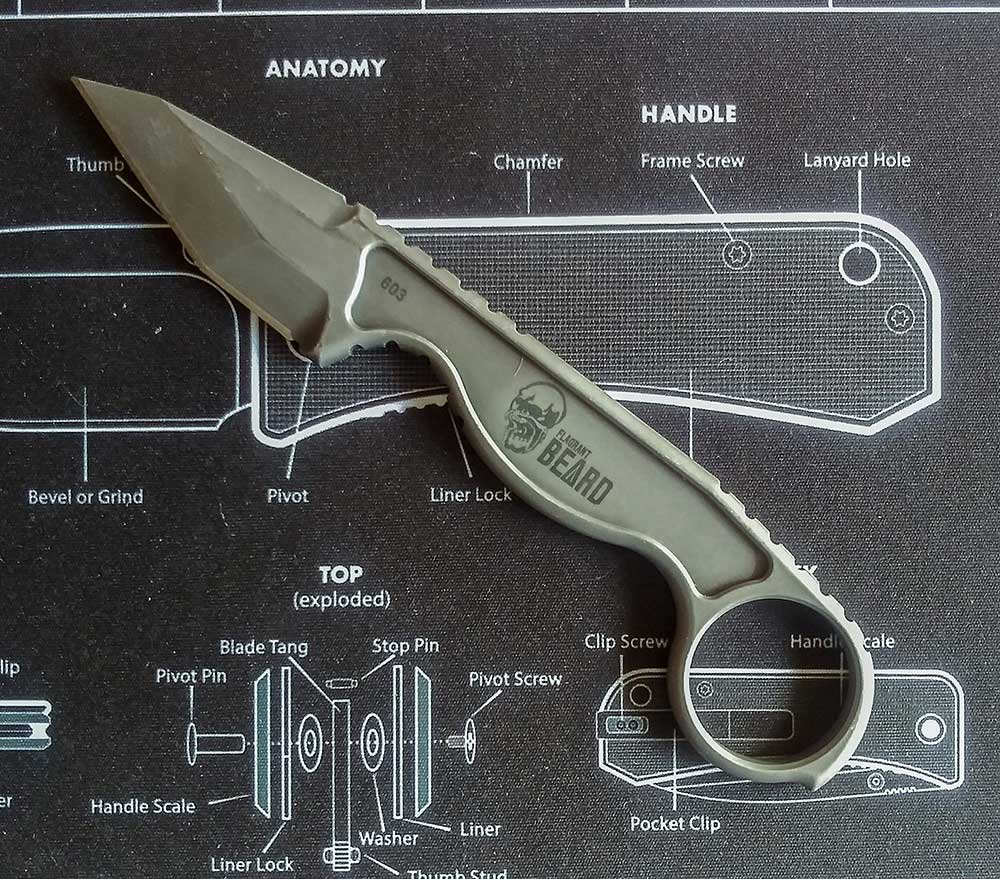 This HAVOC from Flagrant Beard is an absolute beast. While designed for defensive use, it can handle a number of other chores as well. Author photo.

Not everyone needs or wants a tactical knife. Even fewer people will end up using their chosen blade in truly tactical situations. But, if you’re going to go to the trouble of buying and carrying one, it only makes sense to concentrate on knives that are built for real use, rather than just glorified wall decorations.

WHAT ABOUT TACTICAL FOLDERS?

We’ve focused our discussion on fixed blades for a couple of reasons. First, they are far more durable than folding knives. With no moving parts, no mechanisms can get fouled in the field. Second, on the whole, they’re safer than folding knives, in that you never have to worry about the blade collapsing on your fingers.

That said, plenty of folding knives on the market proudly wear the tactical label, and many of them are fine blades that are perfectly suited for field use. But given a free and open choice, a fixed blade is generally seen as the better option, all other things being equal.

A version of this article first appeared in the January 2023 print issue of Knives Illustrated.