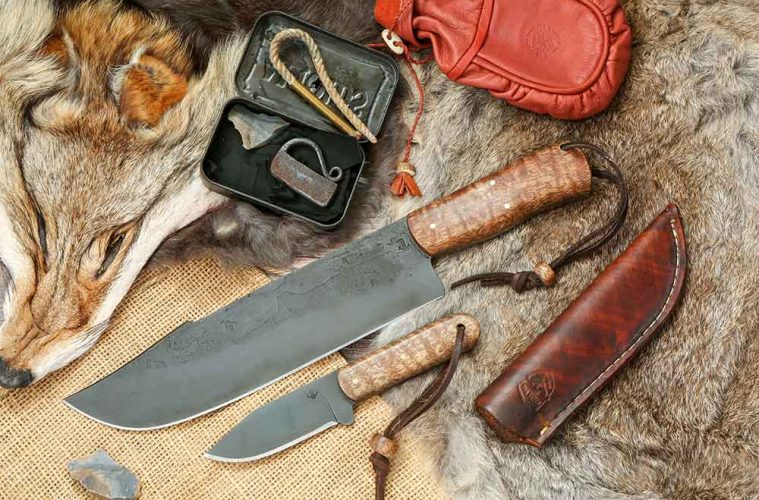 Rustic simplicity meets modern materials is what you get when you handle any products from Tavern Hill Blades. Jason Lowe makes them all, from large choppers to EDC woods knives with his southern flair.

Jason Lowe has been following his passion for creating blades that will stand the test of time, making stock removal and hand-forged knives in Jonesborough, Tennessee.

Both the Talon (hand-forged) and Badger (stock removal) are made of 80CrV2 steel and equipped with stabilized mango-wood scales. The finish is sandblasted with a gun-blue topcoat.

I caught up with Jason to get under his skin and ask him how he started the journey that led him to be a contestant on the History Channel’s “Forged in Fire.” 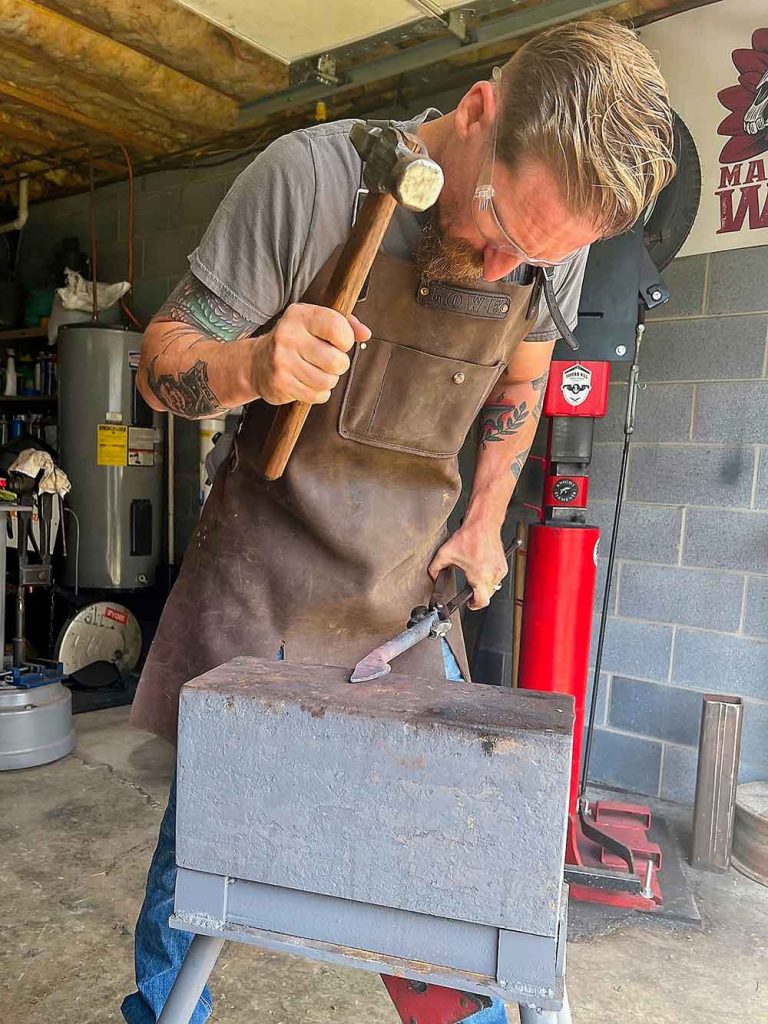 Jason Lowe of Tavern Hill Blades is working it out on some steel. He was a contestant on the History Channel’s “Forged in Fire.”

The first knife I received from Tavern Hill Blades was a small EDC/woods companion fixed blade called the Badger. In the wild, the badger—a furry, feisty critter—imparts persistence, determination, and endurance. Badgers also have mental energy and a fighting spirit. It seems Jason named this little knife accordingly. Like its namesake, the Badger has a big personality and diminutive size.

At 7 1/8 inches in overall length, the Badger sports a 3-inch long blade with an 1/8-inch-thick spine. I was first attracted to its compact, Kephart-like qualities. I instantly envisioned this knife as a companion to a more prominent tool—say, the Talon?

While the larger Tavern Hill knife, the Talon, was busy splitting and chopping, the Badger was used as the crafting knife. The first task the Badger performed was shaving dry tinder after days of rain. The blade was sharp from the point to the plunge line. The handle was super comfortable, as I expected from seeing it. 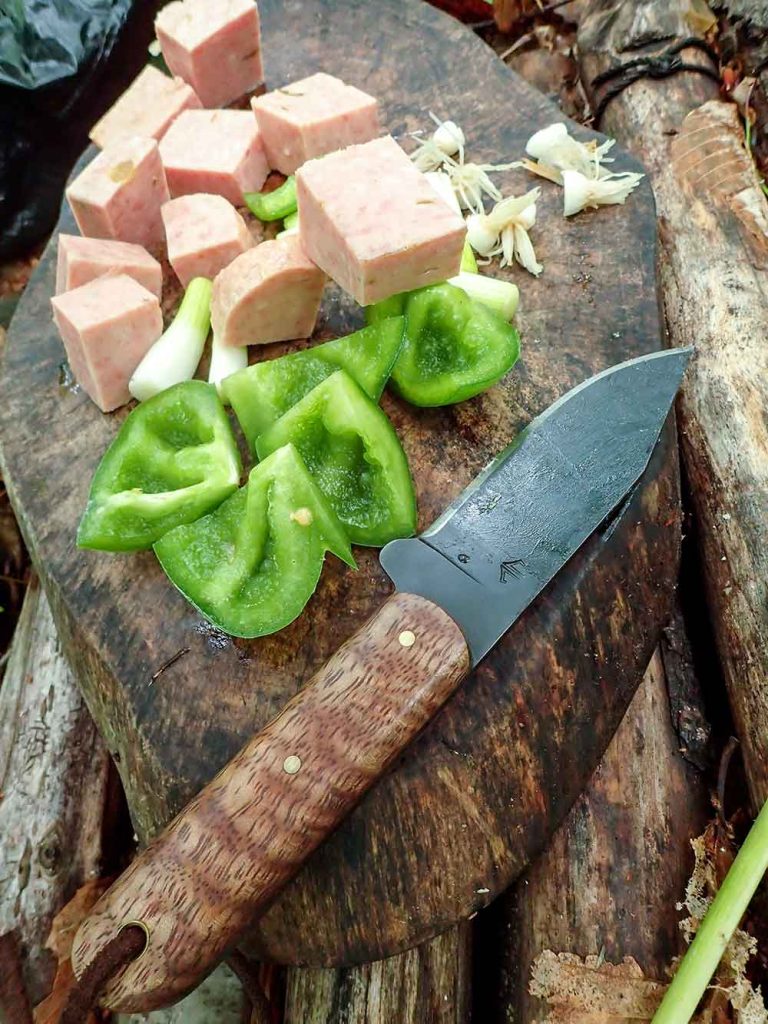 In the woods, the Badger was the camp kitchen knife most of the time over the Talon. It easily sliced veggies and meat for kabobs.

I prefer a larger knife for kitchen duties, but the Badger was perfect in tight areas with small cutting boards and surfaces. I cut tomatoes, onions, peppers, garlic, luncheon meat, and shaved thin pieces of witch hazel for kabobs. The thin grind was slicey and handled all the food prep like a champ.

On the crafting side of the spectrum, I made a pot hanger utilizing two old-school dovetail notches and a forked branch. A baton helped make the four different stop cuts, and the tip was perfect for carving out the wood. I used two hardwood sticks to carve the triangular sections that would fit into the dovetail notches and act as hangers. A small, lightweight crafts knife like the Badger is indispensable in the woods.

Last, I made a super simple two-stick deadfall with the Tavern Hill Badger. It required a heavy rock that was stable and equally weighted. I carved two finger-to-thumb-thick pieces of dry wood. The vertical piece had a flat bottom, and the top was carved into a wedge. The diagonal had a 45-degree section carved at the top and a seven-notch under it. 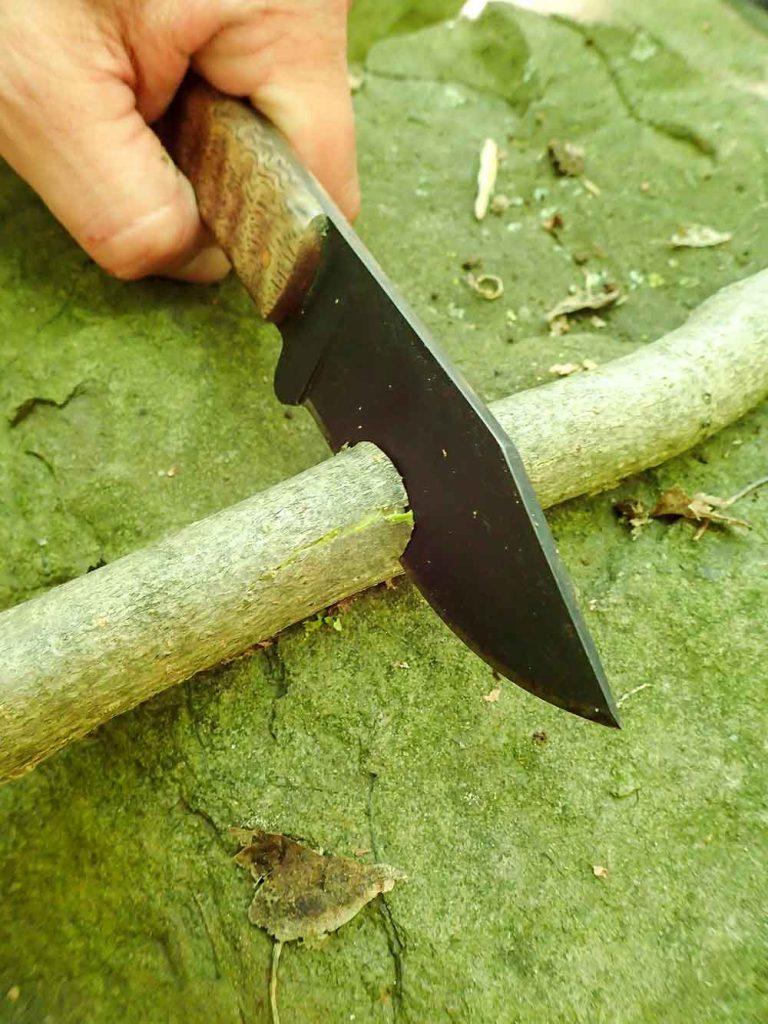 : Stop cuts with the Badger, and a baton, quickly made notches for a pot hook.

The vertical piece holds up the diagonal and the deadfall, while the end is where the bait would be attached. Movement on the end of the diagonal will make the deadfall come crashing down. A knife like the Badger is always there when you need it, yet never in the way.

At first glance, the strikingly large knife resembles the famed Hudson Bay pattern. The overall length is 13 3/4 inches long and 5/32 inches at its thickest point. With a full 9-inch-long blade and 2 1/8 inches in width, this blade is a hand-forged slicer and a chopper.

The handle is comfortable and straightforward, with the smallest amount of helpful swell at the end of the scales. A beautifully handcrafted leather sheath comes standard with a brushed finish look and the Tavern Hill Blades maker’s mark stamp. 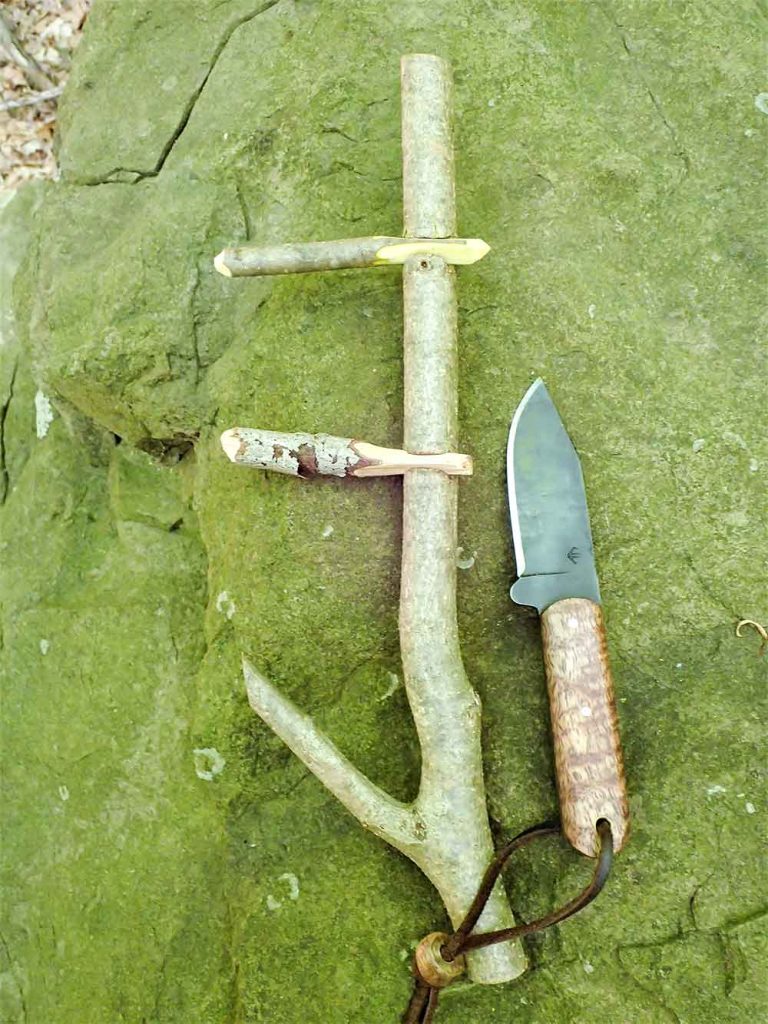 : A dovetail-notch pot hook was made with the Badger. This type of pot hook adjusts the level of the pot and offers a little crafting in the process.

I wasted no time putting the Talon to work making a swamp grill for kabobs. I searched for green witch hazel, which is abundant in my neck of the woods. I needed four Y branches, two support bars, and several thinner green pieces for the grill.

A pilot stick is one overlooked camp tool that is important when dealing with hard ground and Y sticks. I use a pilot stick as the beater stick to start the hole to insert the Y branches, as hammering the Y pieces will often cause them to split. All the green pieces were about thumb-thickness to thinner-pencil to finger-thick grill portion.

The weight, combined with the thin grind of the Talon, cleanly chopped through with minimal effort and maximum comfort. Once the spacing of the holes was measured, the Talon hammered in the pilot stick with its broad blade. I inserted the Y branches and support bars and trimmed the grill top pieces to size. Swamp grill done. 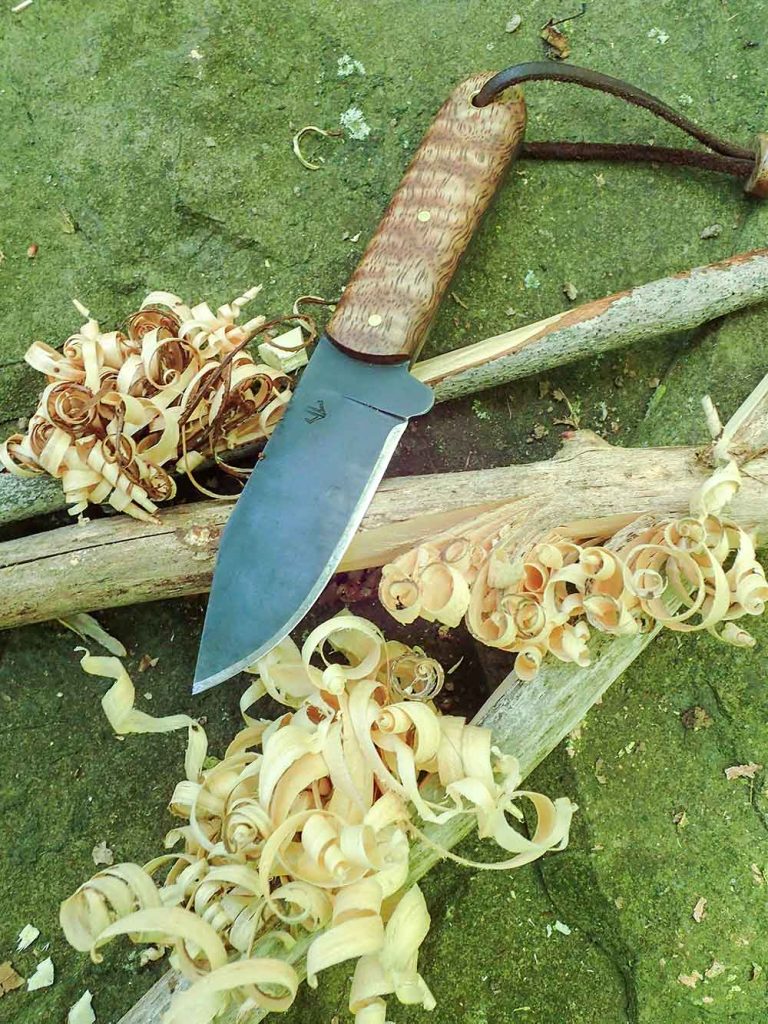 Feather sticks were made thin enough to be classified as tinder, easily taking a spark from a ferro rod. A thin blade excels at this task.

I used the Talon in the kitchen as a large chef’s knife or cleaver, which I am accustomed to using. Whole chicken legs are a staple for me, and I prefer to do all the preparation on my own. Trimming excess fat and deboning was easy. Sectioning drumsticks from thighs and cutting through the joints were done with the Talon.

Vegetables and cheese were all cut with the Talon as it found a home on the cutting board when not in the woods. The wide blade and handle position offer knuckle clearance as with any good kitchen knife or cleaver. When it’s knife testing time, the knife gets used for whatever is on the cutting board and for anything in the house that needs cutting.

Back in the woods, the Talon split soft poplar for kindling alongside another useful camp tool, a baton. This technique offers power and precision to a knife and an added degree of safety, unlike just chopping alone. Poplar is a soft wood that can throw a curve ball to the best blades due to its knots. Poplar was further split down into finger-thick and pencil-thick pieces and eventually chopped to make shorter lengths for fire-making. The swamp grill was made with the Talon, while the Badger did the kitchen work for Spam kabobs.

Hardwood chopping and splitting were necessary for my campfire. A bucksaw was used to help section the correct length for a small wood stove. I selected wrist-thick maple and oak and cut them down to short lengths. This time I used a wide dead log with a flat surface to split more traditionally, as might be done with a hatchet. I stood the small rounds vertically and used a short chop to split the wood with the Talon.

My splitting technique depended heavily on my work surface and the size of the wood I was splitting. Often, I reached for the baton to make splits, but chop splitting was more fun on short, wide rounds of wood when a wide backstop was available. The Talon suffered no chips or rolls while splitting, chopping, or preparing chicken, and I couldn’t have asked for a more comfortable handle. 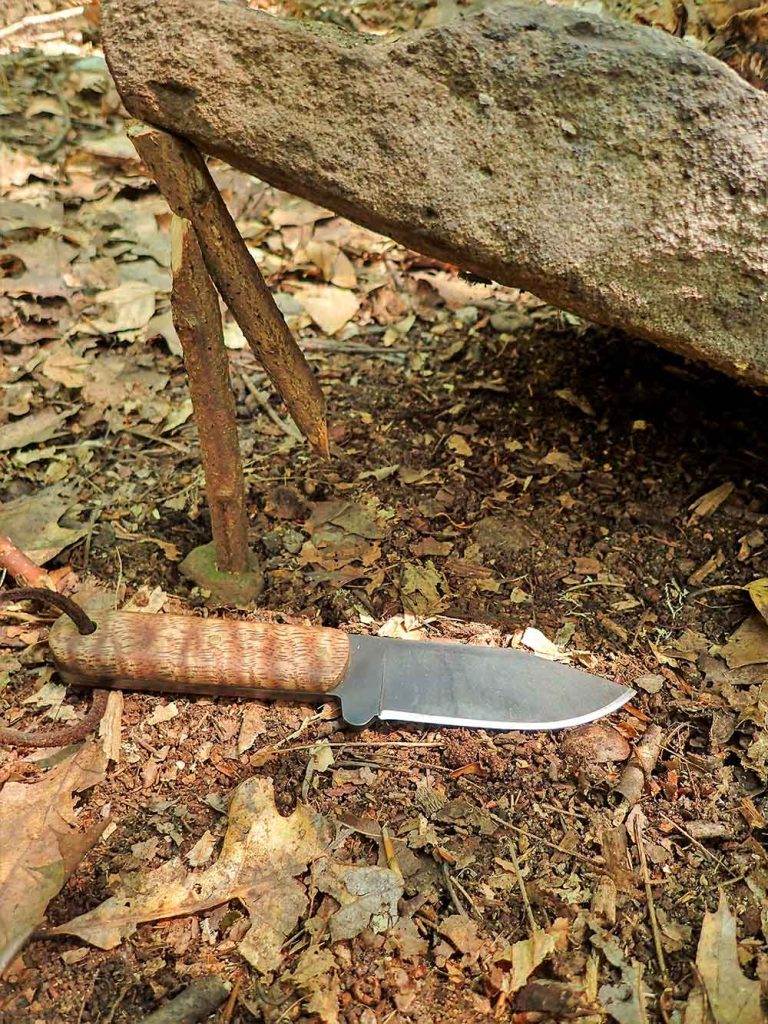 The two-stick deadfall was carved with the small Badger EDC woods knife.

The Talon and Badger complement each other well—a chopper and carver have always gotten it done in the woods. Jason believes that with every blade forged, a legacy is left behind. I would say the Talon and Badger are prime examples of this happening. KI

KI: What got you into making knives?

JL: As a kid, I was always fascinated with knives and all edged weapons. After trying a small amount of blacksmithing, I gave it a go at knifemaking and never looked back. 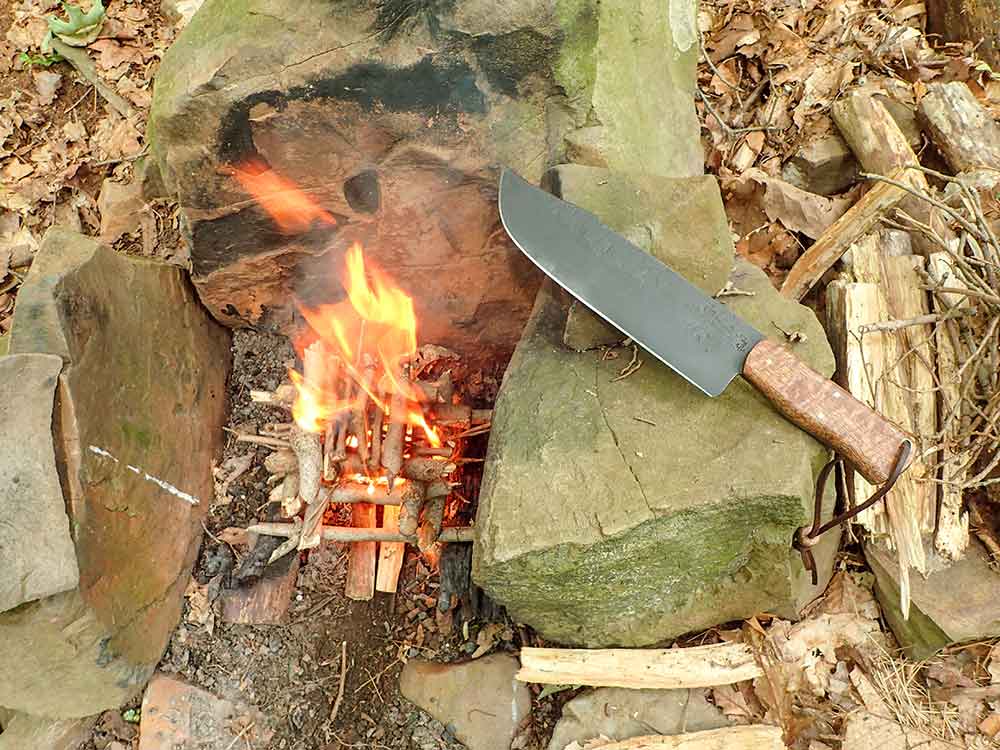 The Talon chopped and split wood for several campfires, including this log-cabin fire.

KI: Whom have you been able to study with whom you admire?

JL: Most of my training started with a lot of studying books and videos after meeting more bladesmiths and blacksmiths. By trading secrets, I gained a ton more knowledge of forging and heat-treating. I would say one person I admire and watch a lot of his videos and love his style of blades is Jason Knight, who is now one of my friends and lives not far from me. I feel if I have any questions I could call him and he wouldn’t hesitate to answer. But with that being said, I have my style, but all blades hint at other smiths’ styles. They all intertwine somehow, and there’s no way around it. 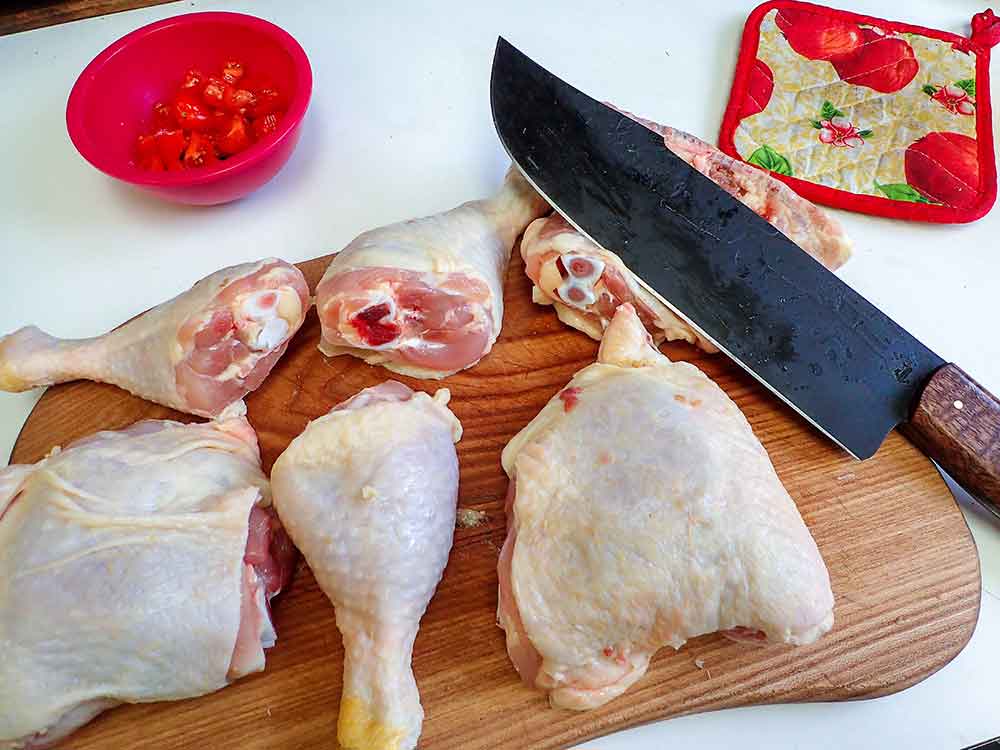 The author used the Talon as his kitchen knife for over one month. Vegetables, pork, and chicken were all cut with the Talon as its thin edge lends itself well to kitchen duties.

KI: What patterns do you prefer to make and buy?

KI: Can you describe your style of knifemaking?

JL: My style would be a Western Frontier mix with rugged Tennessee camp blades. I want my blades to be workhorse blades that people use, not that sit on a shelf. I want to hear about how my blades changed a survival situation. The author made a swamp grill for grilling kabobs. Four Y forks, two crossbars, and several thin grill pieces were quickly chopped with the Talon.

I know quite a few knifemakers who favor 80CrV2 steel for being a steel they can forge and use for stock removal. Being carbon or alloy steel, the closest to it would be 1084 steel. They have the same amount of carbon and offer comparable properties (like edge retention, hardness, and toughness). 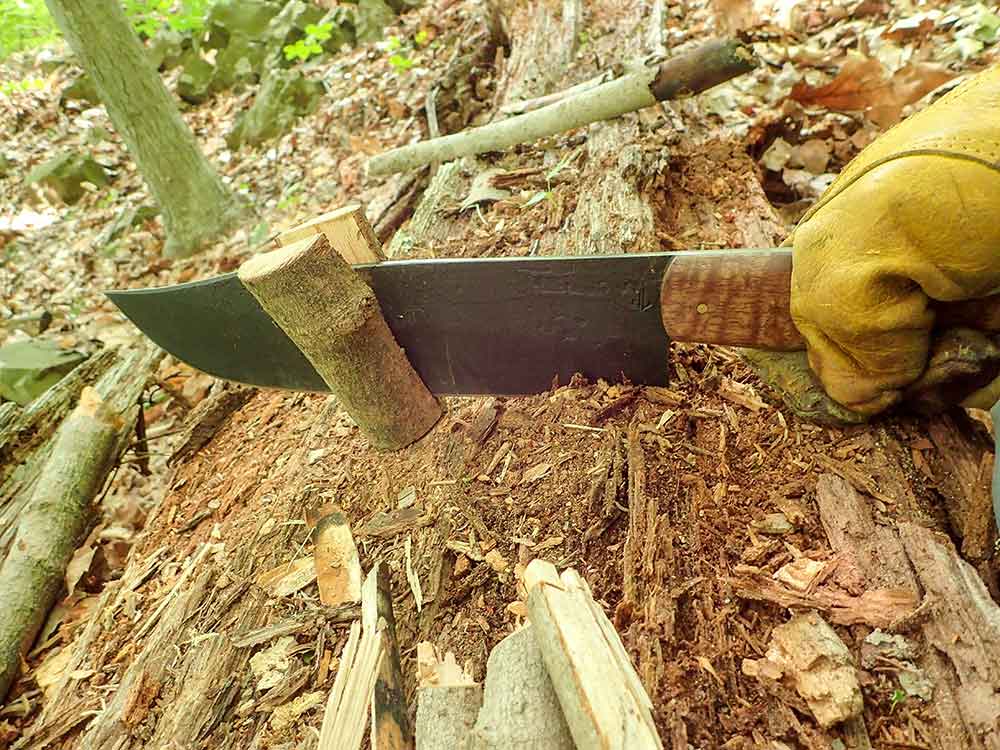 On a wide, very stable wooden surface, the Talon was able to chop-split small wrist-thick pieces of wood for a wood stove.

Nickel Ni 0.40%: Improves strength and toughness. It increases hardenability, but not as much as some of the other alloying elements in steel. Significant amounts can enhance corrosion resistance.

Manganese Mn 0.50%: Improves the strength and hardness of steel. When the steel is heat-treated, hardenability is enhanced with increased manganese. 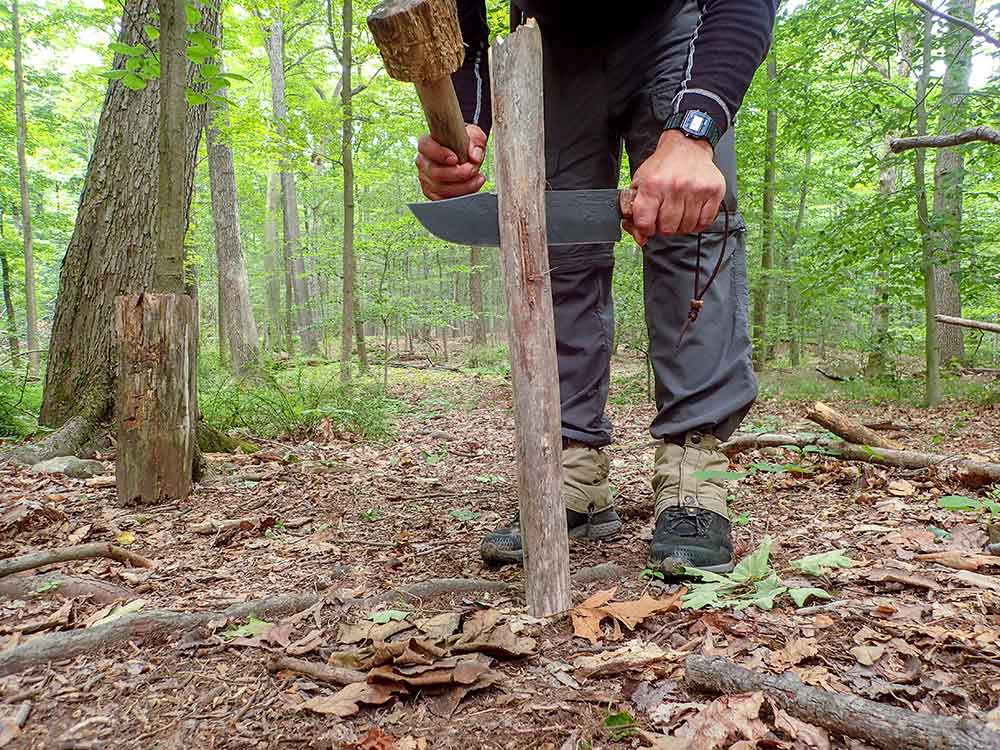 A baton was used with the Talon to split wood safely and precisely.

“About a year ago, I applied to ‘Forged in Fire’ after many co-workers kept bugging me,” Lowe said. “Thinking I would never hear anything after a month, I received a phone call from the casting crew. After setting up an interview and talking, they offered me a date to complete it.

“I was flown to Connecticut for three days,” he continued. “The challenge I performed was very challenging, which I completed. I will stress to the viewers that this is a show, and anything can happen. We had to take a small piece of carbon steel and somehow use it to make a cutting edge, while the rest of the blade was mild steel. I would never make a blade like that, especially within a three-hour limit. You are trying to make the worst best blade in three hours. The whole process was a blast, and all the people were great.” Tavern Hill Blades offers stellar leather for all its knives. The author used both knives together and often separately.