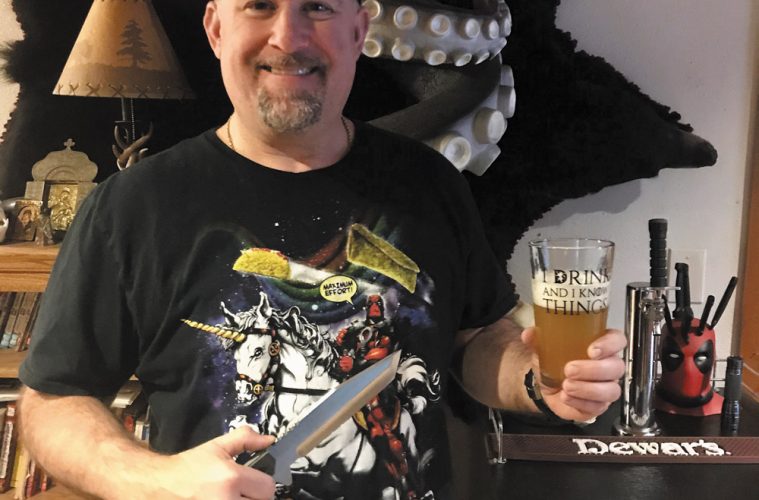 I met Richard Neyman and his family at the BLADE Show in 2011. I was debuting my second design for TOPS Knives and Richard had a booth around the corner from us.

“… what I did was read, read and read, any gun or knife magazine that I found …”

Richard has led an interesting life, and his experience shows up in his writing and collection. He told me, “Way back in the 1980s, I lived on Mount Pinos in Frazier Park, California. The church camp was called Camp St. Nicholas.

My father is an Antiochian Orthodox priest, celebrating 50 years of priesthood this year. We didn’t have internet, TV reception, computers or anything. All I had was God, family, BETA video rentals, lifeguarding and cutting firewood.

So, what I did was read, read and read, any gun or knife magazine that I found at the store.” Rich describes himself as a military historian from the time of the Vietnam war to the present, with a focus on weaponry. 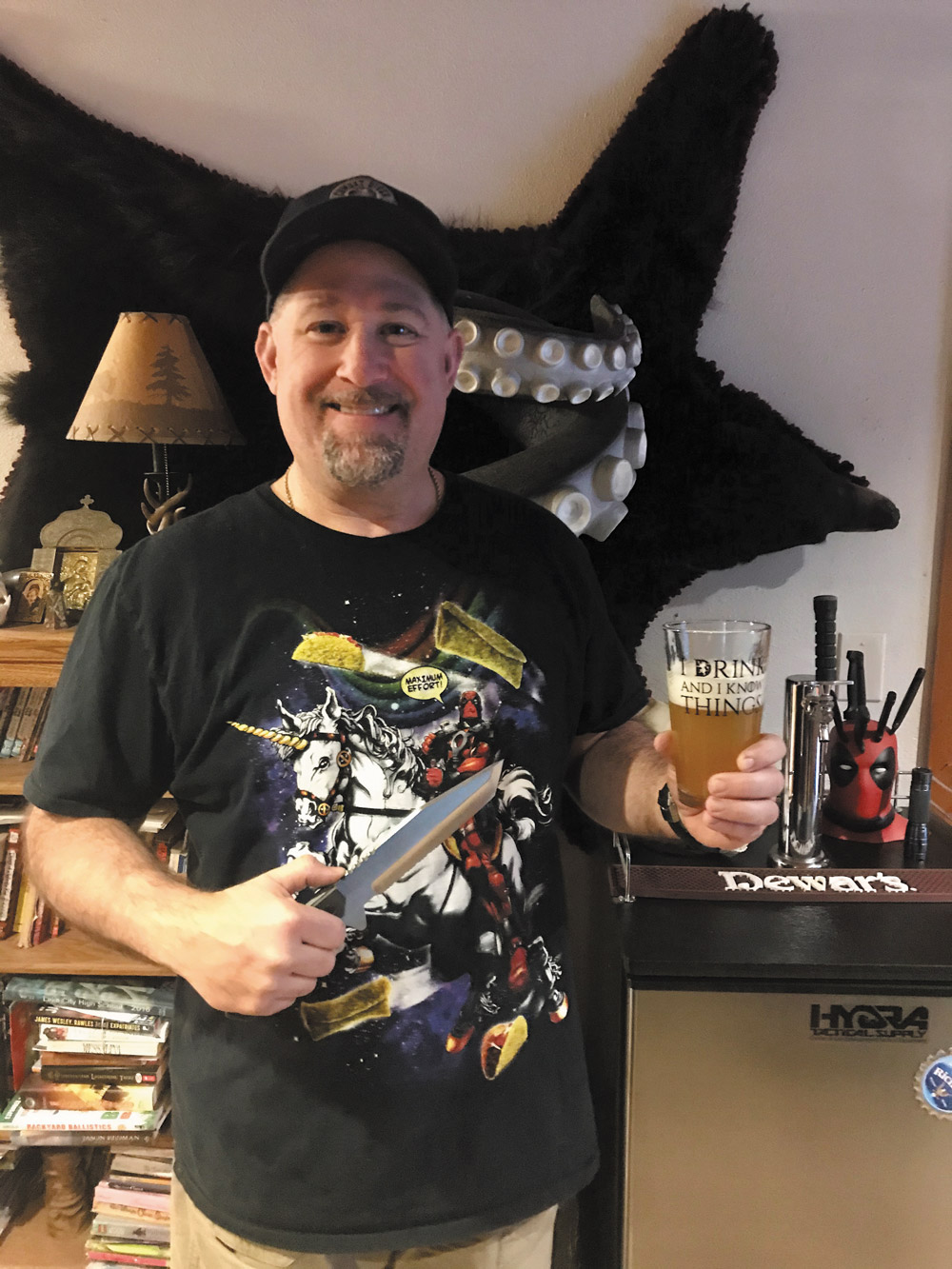 Rich Neyman holding a custom Buck Strider from his collection.

Knives Illustrated: Tell us a little bit about your collections, how many knives do you own?

Richard: My knives are mostly Buck knives. I would say, quick answer, about 300 or so, all locked up in the family’s Cabela’s safe. All earmarked for my one daughter and three sons.

KI: How did you get started collecting Buck knives?

Richard: When I was 15 years old on lonely Mount Pinos, back in 1985, my scoutmaster and Korean U.S. Army veteran, George Millan, told me to pick whichever knife I wanted. He had a Buck Model 110 from the ’70s. I was in town at Frazier Park at the local Ace Hardware store and saw a BuckMaster Model 184.

The store manager told me it was a U.S. Navy SEAL knife. I was astounded and saved up the $168 (equivalent of $401 now in 2020) — lots of lifeguard money — and bought one the next month. As they say, the rest is history. 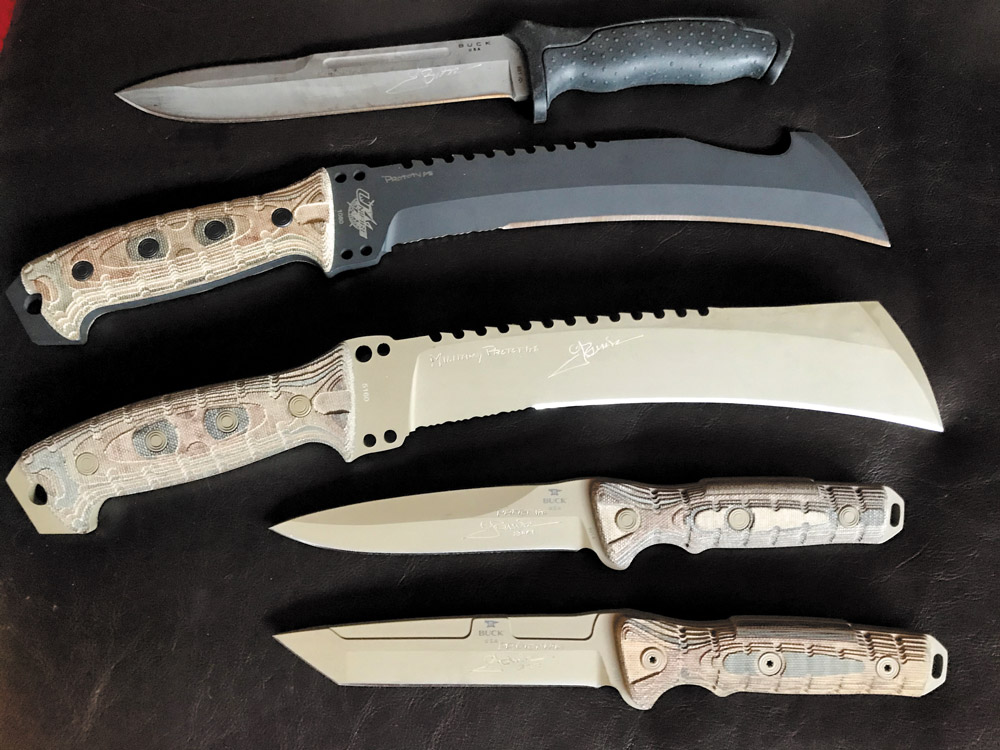 KI: What is your favorite Buck knife and why?

Richard: You know, I evolved. It used to be the BuckMaster Model 184, but now it’s the venerable M9 Bayonet Model 188. If it wasn’t for the BuckMaster, this knife/bayonet would have never been made, but I really appreciate the M9 the most.

It had to pass a bunch of performance tests that were almost impossible; it had to hold an edge but be corrosion-free, had to be hard but survive being bent.

Also, it had to be blunt enough to pry but pointy enough to puncture, hard enough to hold an edge but still be flexible and take a beating, light enough to carry but heavy enough to chop. The knife was a dynamic balance of opposing characteristics and was a real challenge in manufacturing process, as well as product design.

“In my opinion, Buck Knives makes some of the best knives in the world.”
—Commander DT Coulter, U.S. Navy SEAL retired

KI: Name some of your rarer Buck knives?

Richard: I would say one is the all- titanium BuckMaster second generation prototype, handmade in 1984 by the late Robert “Bob” MacDonald of PHROBIS. This knife was from the personal collection of Commander DT Coulter SEAL retired. The Commander owned this knife for 34 years and he gave it to me for my 51st birthday last year. 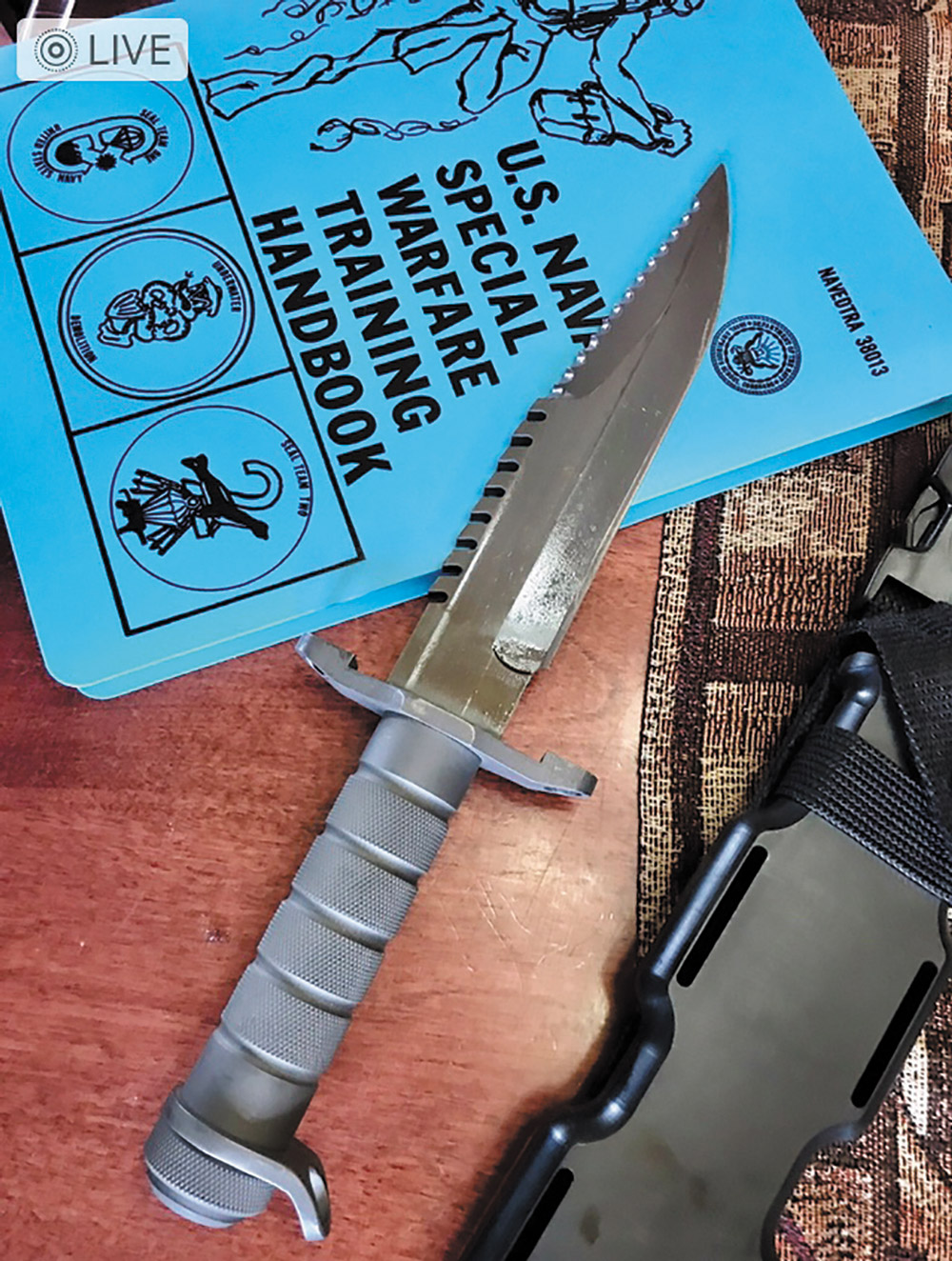 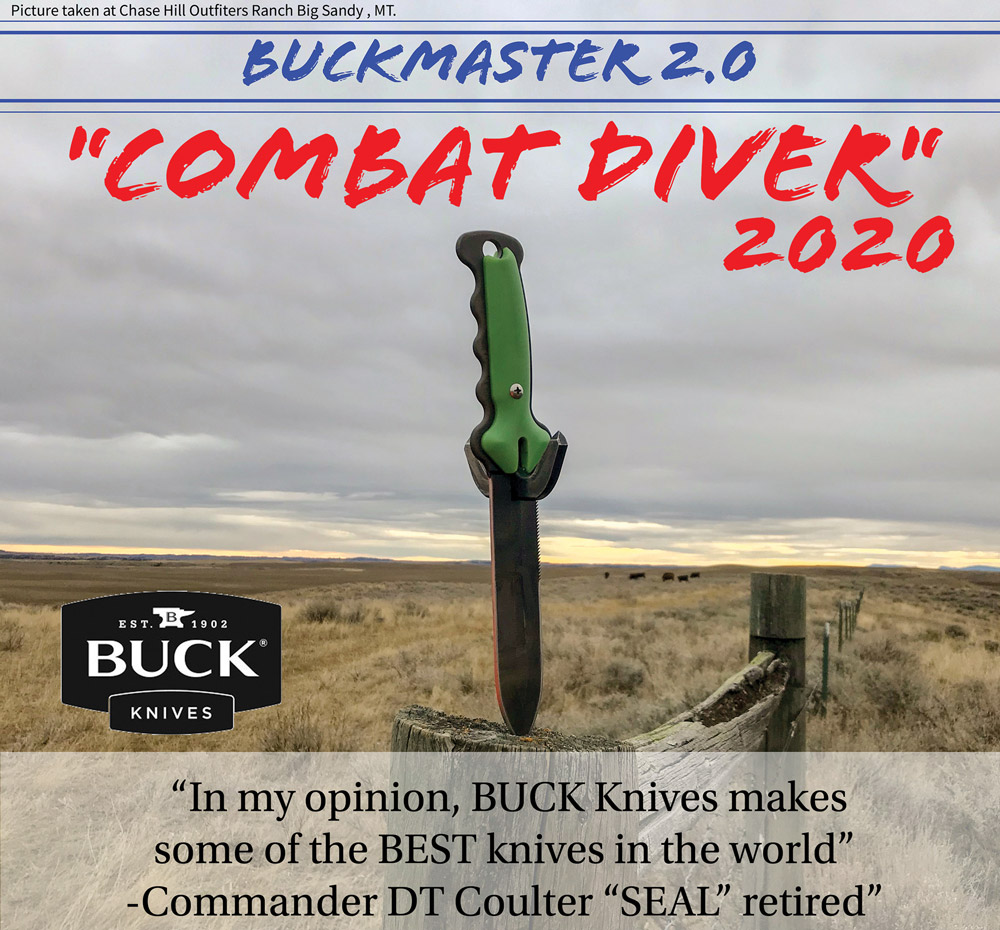 KI: Tell our readers about some of your prototypes.

Richard: I used to have the largest prototype collection of BuckMaster knives. I have many Buck tactical and military prototypes, including the new Talon and badass “GCK” Ground Combat knives (modified spear point and tanto point) that Buck Knives just released at SHOT Show 2020.

KI: How many books on Buck Knives do you have in your library?

Richard: I love my library. To be fair, there are only four books written on Buck Knives. I have personally written two of them.

KI: Can you expand a little more on the two books that you have written? Tell our readers about those and where can they be purchased. 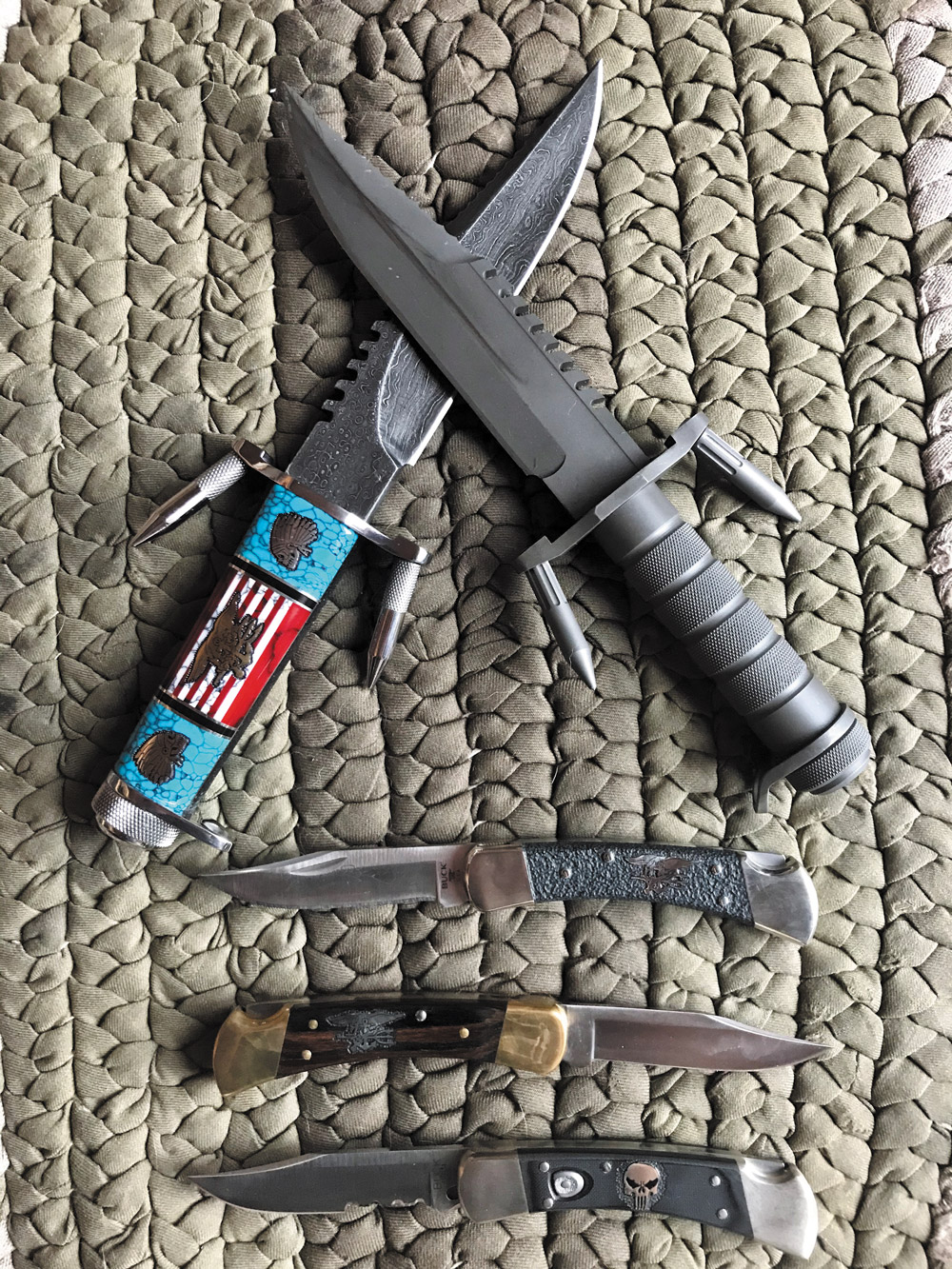 Top-left is the David Yellowhorse Damascus 184, top-right is the CMDR Coulter all-titanium 184. Below, David made two SEAL Trident 110s and a Punisher 110 auto.

KI: I know that you have become friends with CJ Buck and the Buck family, as a collector that must be exciting.

Richard: Of course! CJ Buck (Chairman and CEO of Buck Knives), Joe Houser (CJ’s brother- in-law, Buck historian, and custom knife maker) and myself have all become best of friends and really, they are like my older brothers.

KI: Now, drop the big news about your first Buck Knives release that just debuted at SHOT Show 2020. How excited are you about that?

Richard: Heck, yes, I am! Buck Knives did a soft launch of the new BuckMaster 2.0 “COMBAT DIVER” during SHOT Show 2020. The release date should be SHOT Show 2021, and the prototype was viewable during the SHOT Show 2020.

We discussed some of the testing that has been done on it from Commander DT Coulter U.S. Navy SEAL retired and his top-tier Navy SEAL operators, including features and benefits. Our interview can be heard on the “Talking Lead” podcast release on January 31, 2020 (TalkingLead.com).

There have been many special folks involved in the reiterations and evolution of the knife and sheath. We feel that this will be a very much sought-after product, judging from the reaction we’ve received up to this point.

KI: Will you be at the Atlanta BLADE Show 2020 this year? Will our readers be able to say hello and see your new knife there?

Richard: I know that Buck Knives will be exhibiting at the 2020 BLADE Show in Atlanta; CJ Buck, Chris Brooks (Director of Brand Management and New Product Development) and one of Buck Knives’ internal industrial designers will be attending. Buck will have the BuckMaster 2.0 “COMBAT DIVER” prototype available to view. God willing, my family and I will attend. 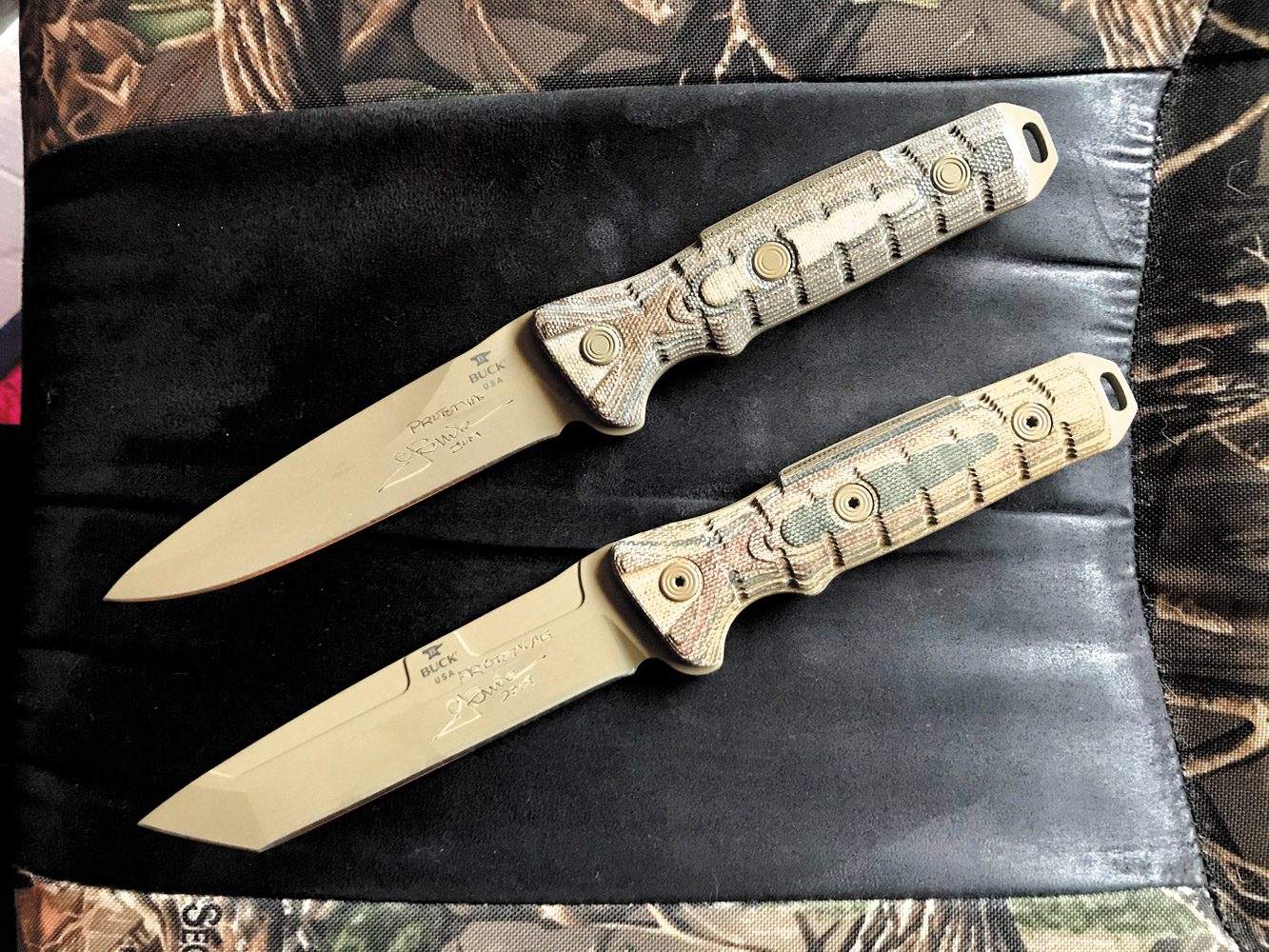 “My other favorite BuckMaster Model 184 is my Buck custom shop radius grind. It has Damascus steel that was ground by Leroy Remer Buck’s custom shop. The handle is handmade by world-famous Navaho artist, David Yellowhorse,” says Richard.

“The handle has a U.S. Navy SEAL trident in the middle of both sides. One side has the Punisher skull logo, and the reverse side has my ‘Skull Chief’ design that I drew for David many years ago.

The handle has bloody jasper, and both white and blue turquoise. It has a first-generation SEAL prototype crossguard of a PHROBIS handmade by Rick MacDonald. This particular knife is the most valuable custom BuckMaster knife in existence.”

Editor’s note: A version of this article first appeared in the May/June 2020 print issue of Knives Illustrated.