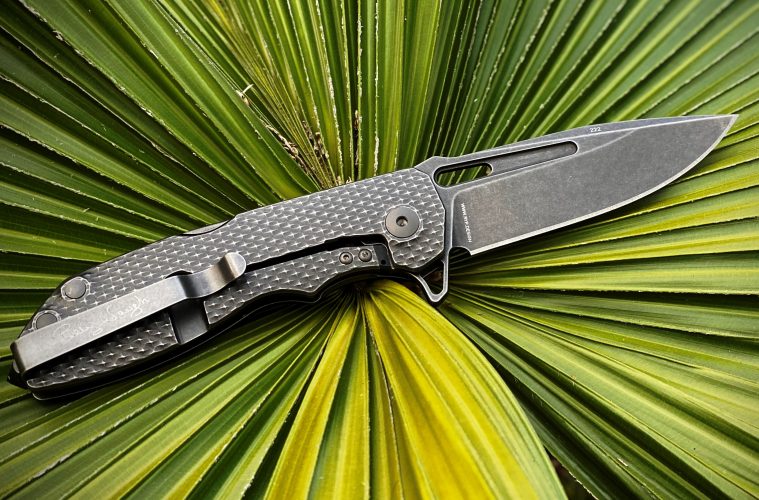 A new limited edition folding knife, the DEMO, is a Robert Young Pelton and William Harsey Jr collaboration and it pays tribute to a Special Forces and CIA legend, Billy Waugh. It is being produced by Pelton’s RYP Design.

Pelton was intrigued by Waugh’s stories of his life in the Special Forces and as a CIA paramilitary operator. As a knife designer, Pelton asked Billy what he carried on his missions deep behind enemy lines during the Vietnam War. Billy remembered his favorite tools being the local parang, the old WW2 issue and the machine stamped Demo knife issued to soldiers. Pelton offered to design a series of knives that would integrate Billy’s hard earned ideas into a new reimagining of tactical blades.

No Cutting Corners With The DEMO

The design was inspired by the standard issue multi-purpose knife Waugh remembers from his Vietnam days. The Billy Waugh version of the DEMO is not only a knife fitting of the special operator, but an homage to toughness, and performance under fire.

The DEMO features a balanced three dimensional Titanium alloy body with a retro diamond pattern and vintage finish. The four inch flat grind M390 blade is on bearings, with flipper, glass breaker screw, and an awl on bronze washers.

The knife comes with a replacement flat head screw. The deep pocket combat clip is engraved with Billy Waugh’s signature. The blade is laser engraved with William Harsey’s signature. Limited quantities of the Billy Waugh edition will be created with the unsigned DEMO version going into production runs later this year.

The DEMO features an awl and glass breaker.

Billy Waugh had a military and intelligence career that can only qualify as legendary. Prevented from enlisting for World War II because of his age, Billy eventually signed up for the U.S. Army’s newly created Special Forces – choosing the most dangerous tasks our nation demanded.

Billy is the recipient of eight Purple Hearts and has a lifetime of service to America. Billy Waugh continued his Special Forces career all the way to the opening months of the war in Afghanistan.

His 20 years in the CIA post retirement made Billy officially the oldest serving CIA contractor in history. Billy’s book “Hunting the Jackal” covers his time tracking Carlos the Jackal and Bin Laden, and “Isaac Camacho An American Hero” is his homage to a fellow Green Beret.

Award winning designer William Harsey Jr. grew up as a logger in the Pacific Northwest, but managed to get a degree in fine design. He put his elegant artwork and knowledge of the craft to design knives, and the rest is history. Harsey is the creator of the Applegate Fairbairn Combat Folder and the

equally famous “Yarborough” design, which is issued to each Special Forces graduate. Harsey’s designs can be purchased from Gerber, Spartan Blades and Chris Reeves Knives.

The DEMO is a limited edition collector piece that would also make a great EDC knife.

Robert Young Pelton is not only an award winning knife designer, but is best known for his lifetime of documenting war zones on film, and in his books. His time with SF ODA 595 or the “Horse Soldiers” in Afghanistan during the winter of 2001, led to the unit adopting his patch.

Billy Waugh is featured in “Licensed to Kill — Hired Guns in the War on Terror,” Pelton’s best seller on contractors, paramilitaries and mercenaries. Waugh and Pelton have shared some of the same wars and hit it off. They have been friends ever since.

RYP.Design is a new venture in which Pelton will partner with designers and legends to create unique products ranging from books to graphic novels to knives to survival designs.

The initial limited edition DEMO is only offered for sale through two websites: www.ryp.design and exclusive RYP Design dealer, Straack, at www.straack.com. And be sure to check back with KnivesIllustrated.com for more of the latest news from the knife industry.