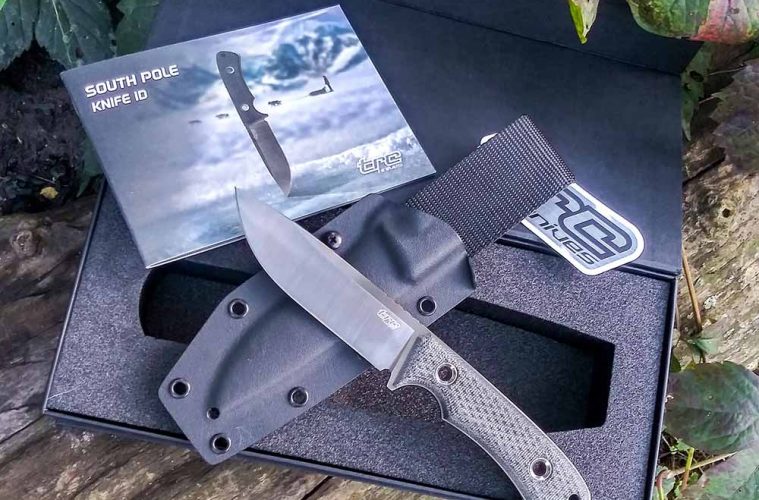 THE SOUTH POLE FROM TRC KNIVES

Wait, hold up a second. This is obviously a bushcraft sort of knife. But it’s called a South Pole? There can’t be a whole lot of bushcrafting being done at the South Pole, so what gives?

The inspiration behind the knife lies not with the location, but with an explorer. Roald Amundsen and his team were the first expedition to reach the South Pole. In discussing this incredible achievement, he said:

“I may say that this is the greatest factor: the way in which the expedition is equipped, the way in which every difficulty is foreseen, and precautions taken for meeting or avoiding it. Victory awaits him who has everything in order—luck, people call it. Defeat is certain for him who has neglected to take the necessary precautions in time; this is called bad luck.” 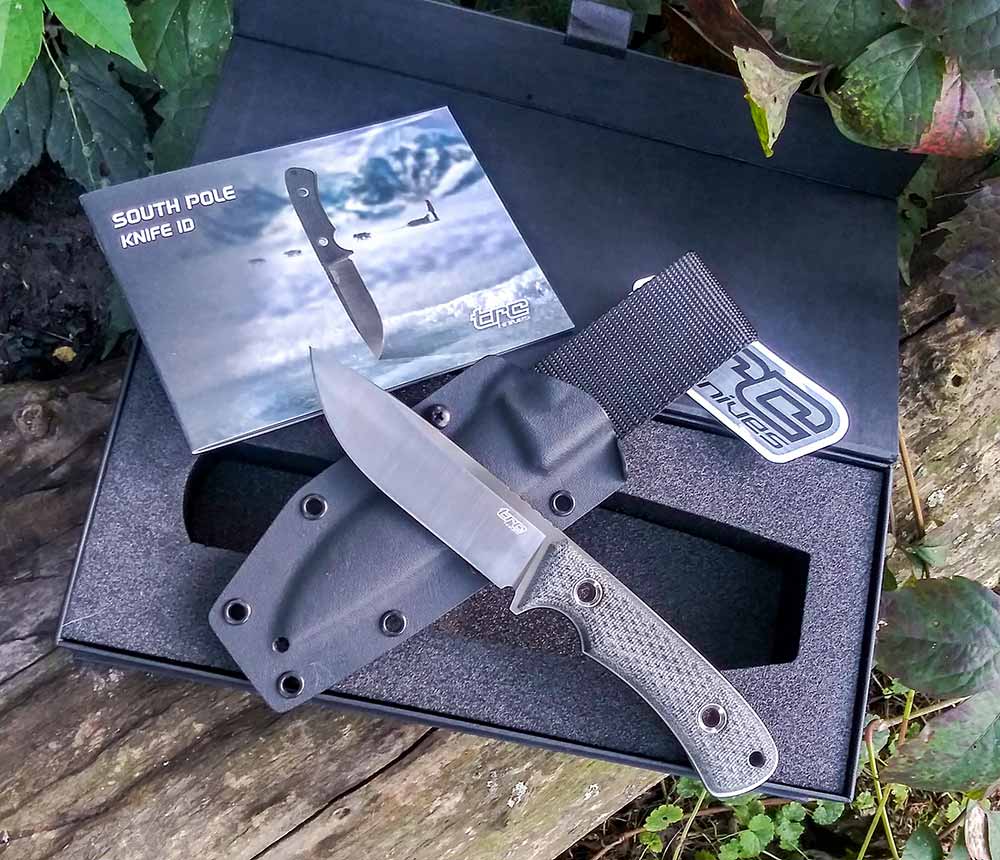 With far more than a simple cardboard box, TRC Knives packages the South Pole in a foam-lined case.

He must know what he’s talking about, as he was also the first person to reach both the South and North Poles in addition to leading the first expedition to traverse the Northwest Passage.

It was this attitude that inspired the knife’s design, the idea being to create a knife that was nearly perfect for any outdoor task, from processing game to processing the firewood with which to cook it. It was intended to be a practical knife, not something you’d want to just leave on a shelf to admire.

And they absolutely succeeded in this goal, as the moment you pick up the South Pole, you’re looking to put it to use. 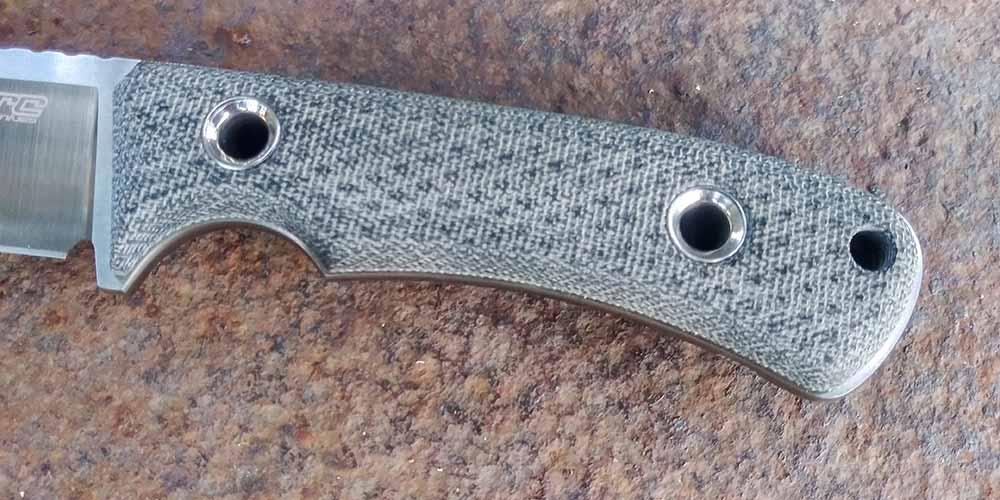 The black canvas Micarta handle is textured to provide a very secure grip in any challenging conditions, from cold to wet.

WHAT’S IN THE BOX?

There’s something to be said for a company that puts significant effort into its packaging. It shows the team takes pride in their work. While most knives today come in a halfway decent box, TRC goes above and beyond with a very nice display case, complete with magnetic closure.

Open the top and you’ll find a booklet from TRC explaining a few things about the South Pole, including the inspiration behind the design and, at the very end of the booklet, a page with handwritten notes as to the knife’s individual serial number, the date it was completed, materials used, and more.

There’s also a TRC sticker, for those who collect them. The knife itself, encased in its sheath, is secured in a foam cutout.

There is about an inch of jimping on the spine, but it is somewhat rounded and not rough or coarse at all.

The first thing I noticed as I removed the knife from the box was the handle, which I suppose would make sense, given that’s what you’re holding as you take the knife out. I’m telling you right now, this is one of the single most comfortable knives I’ve ever had the pleasure of holding.

If there were a knife handle equivalent to the feeling of sleeping in on a Saturday morning, wrapped in a soft comforter while rain gently pelts the window, this is it. Seriously, it is that comfortable.

“I’m telling you right now, this is one of the single most comfortable knives I’ve ever had the pleasure of holding.”

A handy thumb break on the Kydex sheath makes it easy to pull the knife out. The sheath has a nylon web belt loop as well as several other attachment points if you wanted to strap it to a pack or something.

The belt loop is removable by means of two screws. A small drainage hole at the bottom of the sheath is there to release any moisture that might be present—a nice touch that isn’t seen all that often.

As for the knife itself, the only thing that’s sharp on it is the blade’s edge. There are zero other surfaces that could cause hot spots or other forms of discomfort while in use. The spine is somewhat rounded, with just a bit of an edge. There’s about an inch of jimping that’s rough enough to provide traction but not so much that it digs into your thumb. 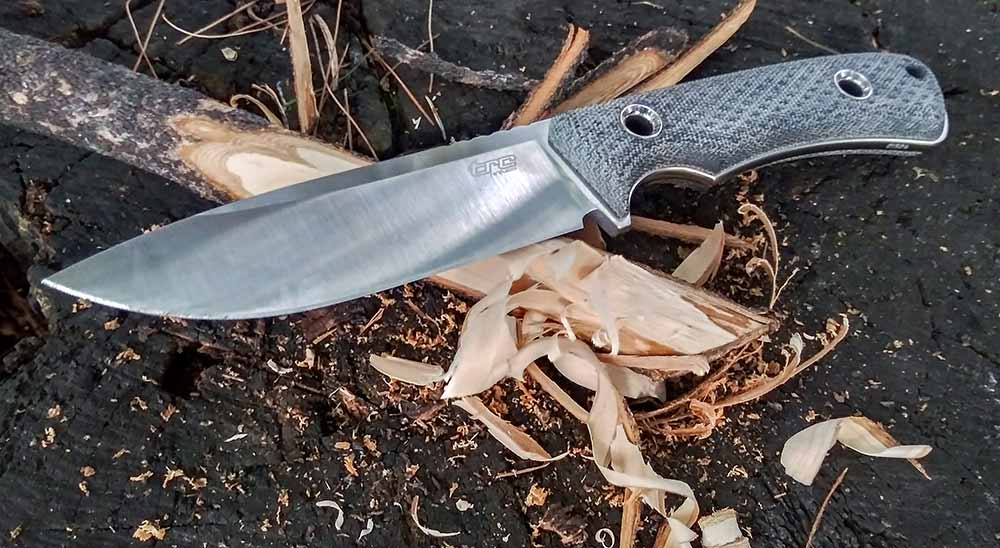 Feathersticking was no problem at all with the South Pole.

The blade’s edge isn’t just sharp, it has a level of keenness to which surgical scalpels might aspire. It is a flat grind with a satin finish to the steel. Personally, I’m not overly fond of the sharpened crowbars that have become fashionable as woods knives in the last several years. No worries about that with the South Pole, thankfully. The blade is 1.1875 inches high and just 0.178 inch thick, making it a tremendous slicer.

“This is truly a knife made for serious use.”

The handle is black canvas Micarta and it has geometric texturing, giving it a very secure grip. Interestingly, TRC left the tang slightly proud all the way around the handle, though completely rounded off for comfort. Not only is this aesthetically pleasing, but it also seems to add just a bit to the grippy feel of the handle. The shape is contoured, curving down just a touch toward the butt end.

Overall, the South Pole feels more like a full-custom knife than anything mid-tech or production. The attention to detail is astounding. 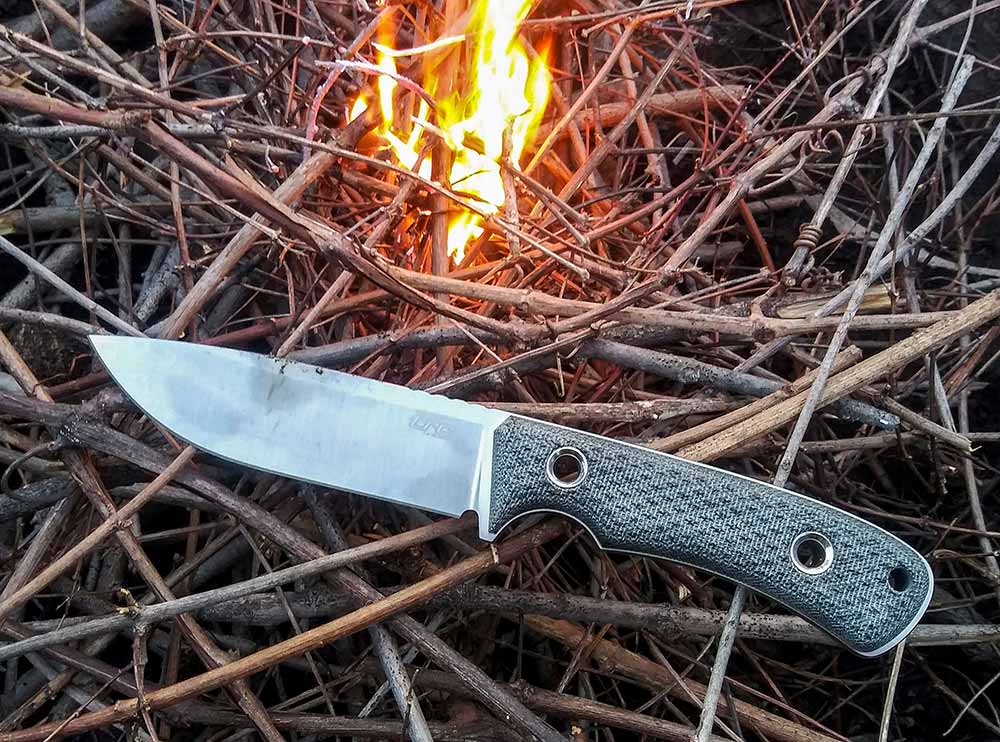 Sparks flew from the ferro rod and got this fire going quickly.

BUT, DOES IT PERFORM?

When I’m gearing up to do a knife review, I’m sure I make my wife nervous as I’ll stalk around the house and property, looking for things to cut, chop, and slice. Sure, I’ll take the knife with me on our hikes and other outdoor excursions and use it as my primary blade, but I always like to perform a few tests in a somewhat controlled environment as well.

I’d never used a ferrocerium rod in conjunction with an Elmax steel knife before. No reason for that; it just never really came up. But, because we often use the spines of our knives to scrape sparks from our ferro rods when we’re out in the great wilderness (or just the backyard), I figured I’d give it a shot.

The side of the spine has just enough of an edge to spark the ferro rod, but it does take a little practice to get the proper angle. I also found that pushing the knife across the rod, rather than pulling the rod against the knife, worked the best. It isn’t ideal, but it will definitely shower sparks down to the tinder material.

The nylon belt loop is easily removable, should you wish to strap the sheath to your pack.

Another common bushcraft task is making feather sticks. Now, here’s the thing. I’ll readily admit I’m not whiz-bang awesome when it comes to feather-sticking. I can make curls and such, of course, but keeping them on the branch has often proven to be troublesome. Not a big deal in the grand scheme of things, as they’ll burn just fine on or off the branch.

The South Pole worked very well for this function. This knife seeks out material to cut like it has a laser guidance system. Curl after curl fell from the wood without any trouble at all.

“with even minimal care, [this knife] will be passed down to the next generation and beyond.”

I used the South Pole for the typical knife chores as well over the course of a couple of months, such as processing cardboard boxes and a bit of food prep here and there. What I really appreciate about the knife is, again, the comfort and ergonomics.

Let’s face it: If a knife won’t cut an apple or slice open a box, the blade likely has some serious issues. So, when I review a knife, I’m more concerned with how it handles rather than what it will cut.

The edge geometry on the South Pole is excellent and the slimness of the blade helps it to glide through every slice. This is truly a knife made for serious use. 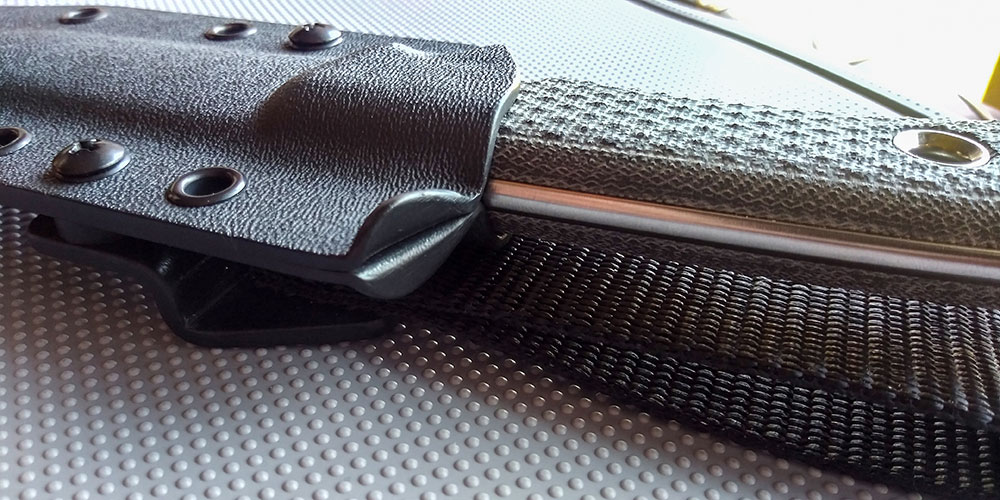 Here you can see the wide thumb break on the sheath.

IS IT A KEEPER?

A common exercise in the knife community is to debate what knife you’d want if you were stranded somewhere indefinitely. If you were cut off from civilization, or perhaps society were collapsing around your ears, what one knife would you want by your side? The South Pole would absolutely be a viable option for an end-of-the-world companion, let alone any sort of Robinson Crusoe existence.

With a price tag a bit north of three bills, this isn’t an inexpensive knife by most standards. But the flip side to that is that, with even minimal care, it will be passed down to the next generation and beyond. This is definitely an heirloom-quality knife. I’ll be honest in that I already own far more knives than any human being would ever truly need. That’s just part of being a collector as well as a knife user.

\Like many other collectors, part of the hobby is selling and trading, always seeking this or that new model. The South Pole, though? That one isn’t going anywhere and has earned a permanent home with me. 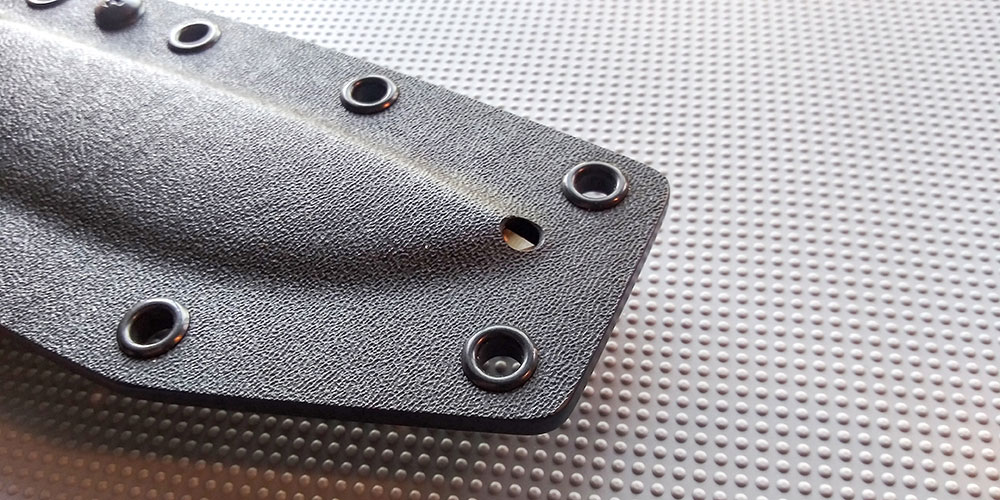 This drainage hole is a very nice touch, something not often seen in other Kydex sheaths unless they’re custom ordered. 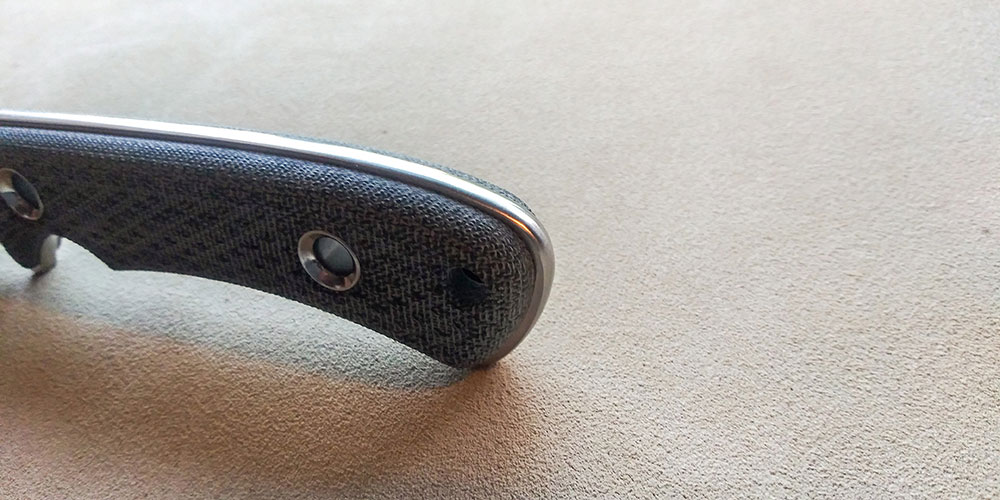 The tang is proud and rises just above the scales all the way around the handle. This is visually interesting as well as adds a bit of extra purchase. 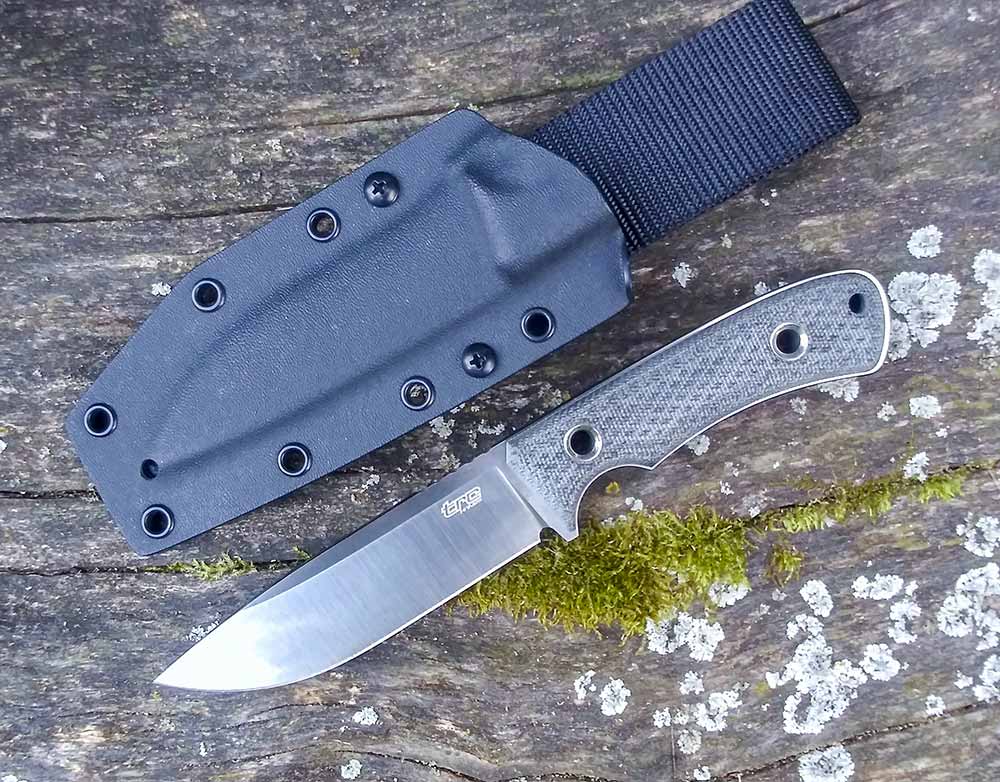 The Kydex sheath is rugged and keeps the knife absolutely secure in any position.

TRC Knives was founded by Andrius Tricius in 2010. Based in Lithuania, he started the company after being unable to find a knife to suit his needs. He and his team have extensive knowledge and experience in metallurgy as well as design. The goal with every model is to create a knife that will serve multiple purposes and exceed the user’s expectations in every way.

They experiment endlessly with designs and materials to produce the perfect combination. Their models run the gamut from bushcraft to EDC to tactical and more. TRC Knives is definitely a cut above, no pun intended.