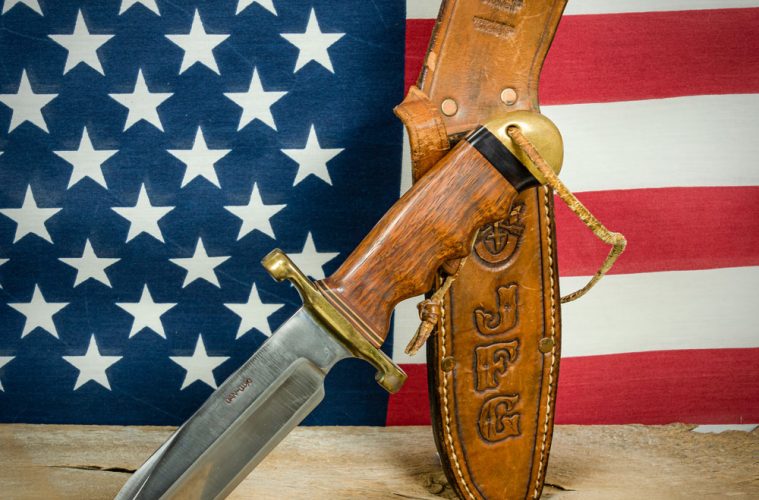 The Story behind the original Dan-D Green Beret Knife

Patriotism was not always popular during the 1960s. The nation was deeply divided during this time of political assassinations, civil rights struggles, and the Vietnam War.

Many popular songs were anti-war. But in January 1966, “The Ballad of the Green Berets” rose to the top of the charts. The patriotic song was Billboard’s No. 1 single that year. Staff Sgt. Barry Sadler had written the song while he was training to be a medic. Here are some lines from the lyrics: 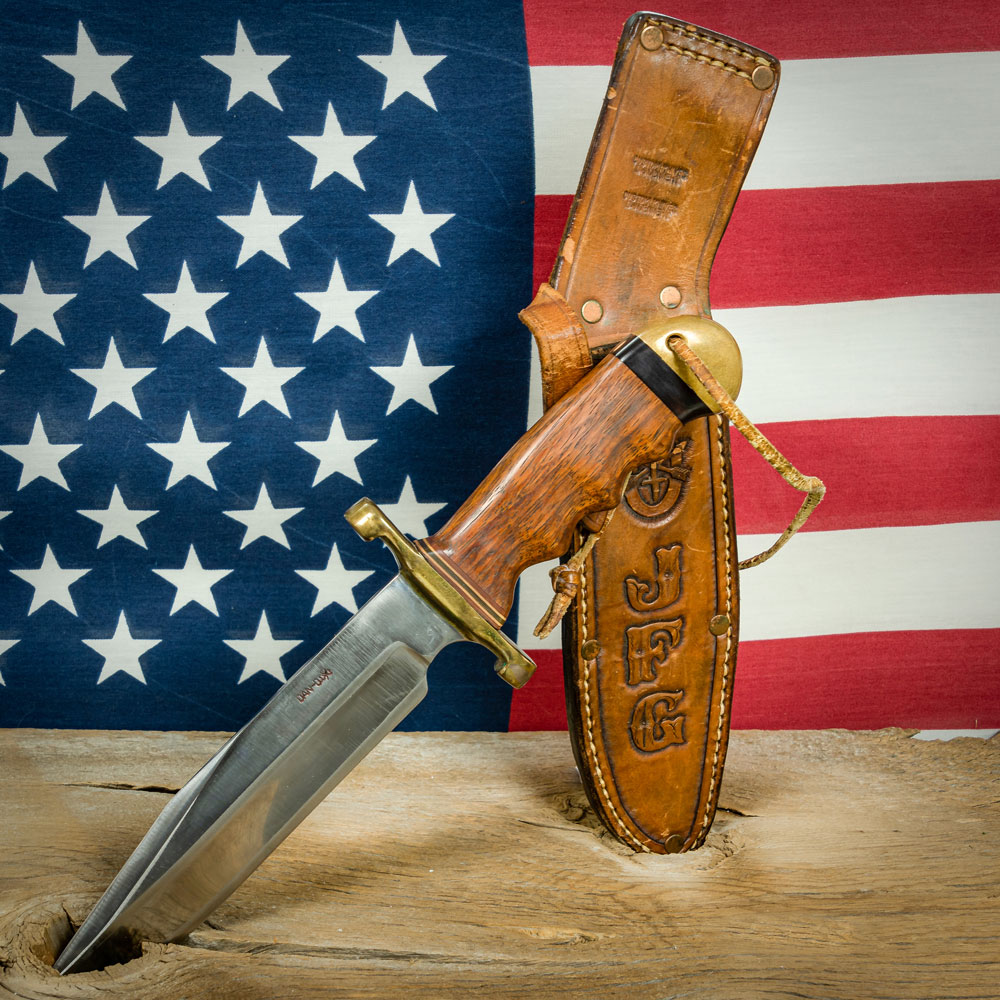 The original DAN-D Green Beret Knife with its customized sheath. Sheath customization was unusual in 1967.

Think about that: three out of 100. You must be tough, resilient, and intelligent to earn the Green Beret. The training is physically arduous and mentally exhausting. But James F. “Fred” Godsey was up to it.

Godsey had already served four years in the Marines, having enlisted in 1959 at age 17.

After a brief stint in the Marine Reserves, Godsey enlisted in the U.S. Army in early 1964. He began his Green Beret training.

“Godsey loved weapons. He was a go-getter. He had one of the first ’65 Mustangs. He wasn’t real big, but in a fight, you’d want him on your side.”

Why would someone who’d already served as a Marine go through all of that?

“Fred had a yearning to succeed, to be the best in his class,” Godsey’s brother recalls. “He was ‘gung-ho’ and self-confident.”

Godsey drew his specs, and Dan added his notes. These plans were returned to Godsey’s family, along with the knife and other personal effects.

When Dan Dennehy sent the custom knife to Fred Godsey, he also sent this note:
June 17, 1967 Virginia Beach, VA
To Lt. James F. Godsey, US Army Special Forces, Vietnam, for whom I specially designed my #11 “GREEN BERET” fighting knife. Good luck, and may God bless you and protect you and all the gallant men who are privileged to wear the Green Beret.   -Dan Dennehy

Godsey could have made do with the standard issue Ka-Bar, but he wanted something special. He needed something much stouter, something he could depend on while he was fighting in another country.

He sought out Chief Petty Officer Dan Dennehy (my dad), who’d been making fighting knives since serving in the Navy during World War II. At the time, our family was living in Virginia Beach, and my dad was stationed at Naval Air Station, Norfolk.

Godsey and Dennehy exchanged drawings and the work on the knife commenced. The drawing that Godsey sent looked like a larger and stouter Ka-Bar. Dennehy sent back his version with notes. That is the one that became the Green Beret model.

The original drawing was returned to me with the knife. While faded, the handwritten notes are still legible.

The knife was made from quarter-inch high carbon steel. It has a 7.5 x 1.5-inch blade with the top edge sharpened. It sports a double lugged brass hilt and a brass butt cap. The handle is Philippine Kamagong with a brass escutcheon. 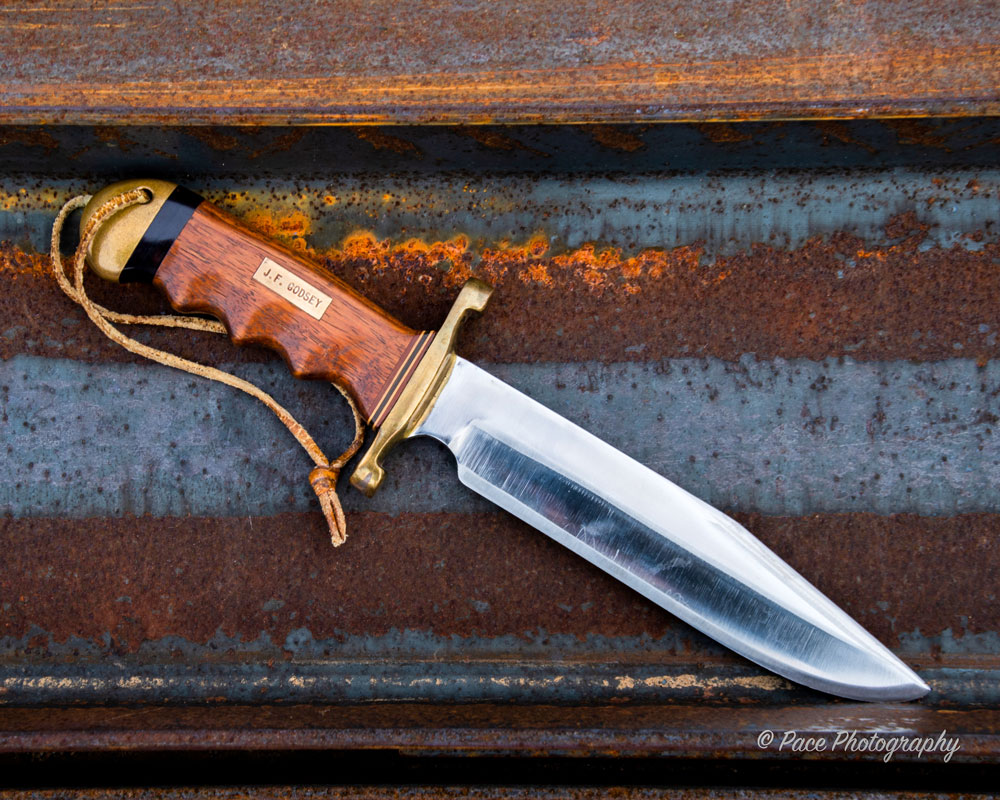 The hand-tooled leather sheath is in great condition for a 52-year-old piece of work. Dennehy was well known for his sheaths.

He customized sheaths at a time when customization wasn’t common, and they always earned him extra kudos from his customers and
other makers.

We do not have any firsthand knowledge of how Godsey used the knife in Vietnam. That part is left up to our imaginations. We do know that Godsey received it. In one of his handwritten letters, he brags about being the inspiration for Dan-D Knives to his peers.

After Godsey was killed, the knife—along with the original drawing with Dennehy’s notes—were returned to Godsey’s family. The family found me online awhile back. A few years later, the knife finally made it back to the Dennehy family.

Dan Dennehy had been making knives since 1941. He made his first sale to a Marine going ashore on Saipan during World War II.

He continued to make knives as a hobby. In 1966, a Navy Times reporter wrote a small article about this Chief who was hand-crafting custom knives for members of the military, including sporting and hunting models. After that article, the requests came much faster. 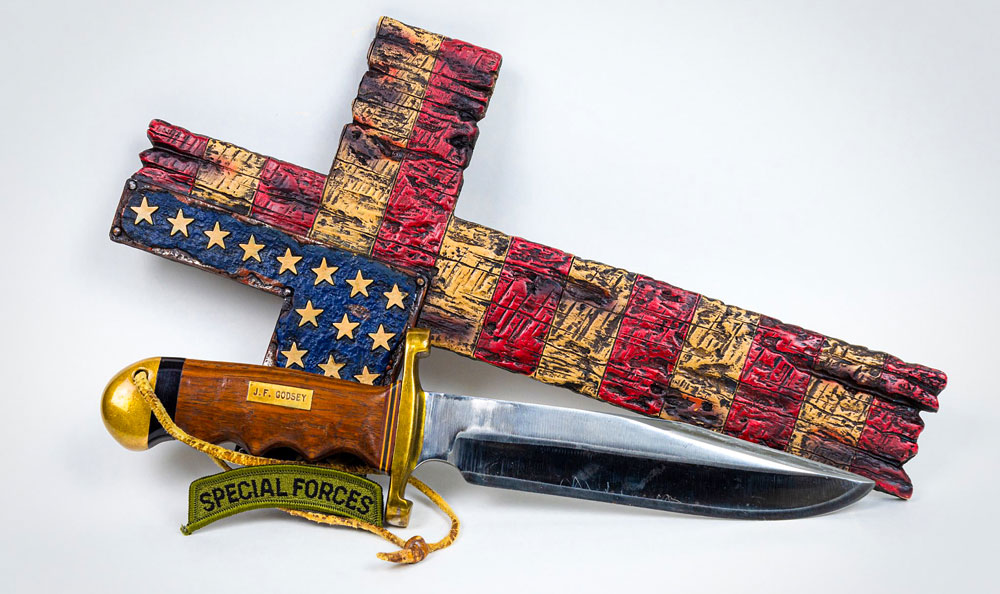 Godsey’s original DAN-D Green Beret knife was returned to his family after his death and eventually found its way back to the family of its maker, Dan Dennehy.

Around the time Godsey commissioned the knife, Dennehy was working on his first brochure. Dennehy wanted this knife to be a standard model in the brochure, and so it was. Since 1967, it has been one of the most popular models.

I still make the Green Beret and the models that Dennehy published in that first brochure, the supplement about a year later, and the catalog that followed in about 1972. Among those first brochures and catalog, you’ll find names like Green River, Woodsman, Pilot/Crewman, Hoss, Brute, Crusader, and Recon Special.

At that time, Dan was using the DAN-D Shamrock stamp, which he had made while in Japan around 1964/65. He switched to the stencils and acid etch in Yuma, Arizona.

Why Are the Berets Green? 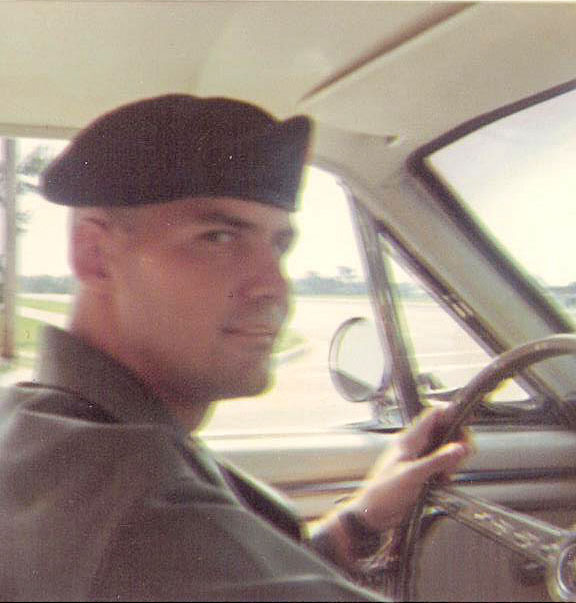 First Lieutenant James Frederick Godsey exemplified the Green Beret soldier through his extraordinary heroism and devotion to duty during the Vietnam War.

The 10th Special Forces Group (Airborne) formed in 1952. The Group unofficially wore berets while training. In the beginning, the berets came in many colors—not just green.

Over time, green became the favorite. Why? Because the Group had many OSS World War II veterans among their ranks. The green reminded early members of the World War II British Commando berets.

On Oct. 12, 1961, President John F. Kennedy visited the Special Forces at Fort Bragg, North Carolina. The President asked Brigadier General William P. Yarborough to make sure that the men under his command wore green berets for the visit.

“The Green Beret is a symbol of excellence, a badge of courage, a mark of distinction in the fight for freedom,” President Kennedy later stated.

Awarded for actions during the Vietnam War, the President of the United States of America, authorized by Act of Congress, July 9, 1918 (amended by act of July 25, 1963), takes pride in presenting the Distinguished Service Cross (Posthumously) to First Lieutenant (Infantry) James Frederick Godsey, United States Army, for extraordinary heroism in connection with military operations involving conflict with an armed hostile force in the Republic of Vietnam, while serving with Detachment A-351, 5th Special Forces Group (Airborne), 1st Special Forces. 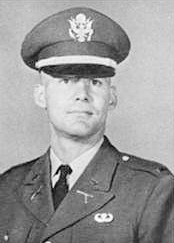 Godsey was a patriot who felt the need to serve, recalls a classmate who served with him. He was awarded the Distinguished Service Cross posthumously for his extraordinary heroism.

First Lieutenant Godsey distinguished himself by exceptionally valorous actions on 9 May 1967 while serving as Special Forces advisor to a Vietnamese company on a blocking mission in HauNghia Province.

Informed that boats of the River Assault Group stationed near his base camp were under heavy attack, Lieutenant Godsey maneuvered his men to block the escape of the Viet Cong force.

He led a squad in pursuit of two fleeing insurgents who quickly joined with a larger force and engaged his men in a fierce firefight. As the battle progressed, a still larger Viet Cong force attacked with mortars, machine guns and recoilless rifles.

Greatly outnumbered, he rallied his men bravely to repel the determined hostile assaults while he waited for reinforcements and air support. He was severely wounded while running fifty meters across the bullet-swept clearing to rescue a wounded comrade, but he ignored his injury and led his men in a furious assault against the numerically superior insurgents.

He quickly overran the front enemy positions and then called for ammunition resupply. He was wounded again while unloading ammunition from the supply helicopters, but he exposed himself time after time to direct the distribution of ammunition to his men.

When reinforcements arrived, he deployed them and personally led the pursuit of the now beaten Viet Cong Force.

First Lieutenant Godsey’s extraordinary heroism and devotion to duty were in keeping with the highest traditions of the military service and reflect great credit upon himself, his unit, and the United States Army.