Just how did those wacky Vikings get their hands on steel-making technology nearly 1,000 years ahead of time?

One of the many things I learned at BLADE? People interested in knives tend to be history enthusiasts also. I enjoyed conversations about Asian steppe warriors, nineteenth-century Zulu skirmishes, the Sandbar Fight, and other obscure events from the history of sharp things.

One thing I forgot to ask at BLADE and wish I had: How ‘bout those Ulfberht Viking swords, y’all?

Archeologists have found about 170 Viking swords forged between 800 and 1000 that have the inscription “+VLFBERH+T” or “+VLFBERHT+” — mostly around Scandinavia and the Baltic Sea. After 1000, the swords seem to have suddenly gone out of production. 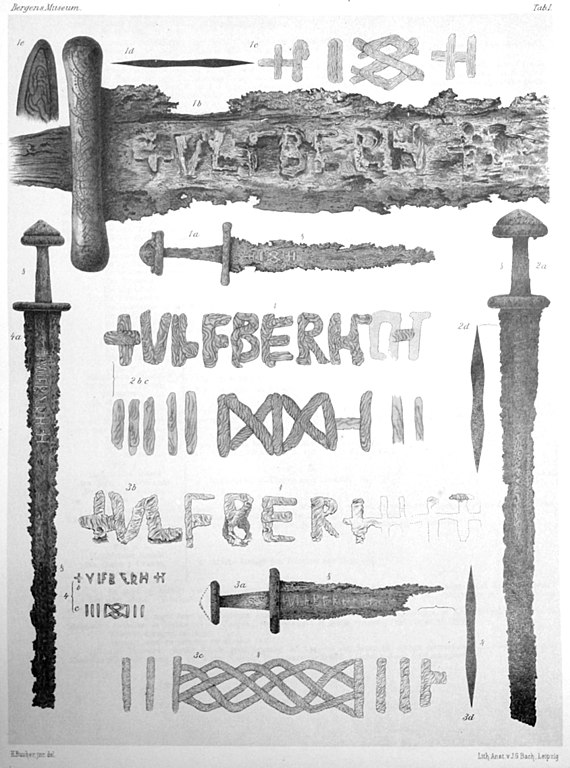 Ulfberht swords are forged from high-carbon, crucible steel. They are which vastly superior to any other weapon available in Europe during the medieval period. Back then, most swords were made from “bog iron.” But the Vikings wielded swords containing steel that Western Europe wouldn’t see again until the Industrial Revolution.

Because they were made from high-carbon steel, Ulfberht swords were lightweight and easy to wield in battle. They would have bent a little without breaking, and they would have stayed sharp longer than other blades available at the time. These qualities meant that Ulfberht swords would have easily prevailed in any medieval arms race. They could even be one reason the Vikings so easily conquered other kingdoms.

To make these swords, the Vikings would have had to understand how to make the crucible steel, a process that rids iron of the impurities that make it weak. Some folks theorize that some Viking — or someone in a nearby Frankish kingdom — somehow discovered a technology that was later lost. But these kinds of theories have been largely discredited. It’s more likely that the Vikings acquired the steel or the technology from India, Persia, and Central Asia, where crucible steel was more common.

How did the Vikings get to Asia?

When you read about Viking conquests (or watch shows like The Last Kingdom), you’re likely aware of them heading north or west from their turf in present-day Denmark, Norway and Sweden to places like present-day France, Great Britain, Iceland, and even Newfoundland. But some of them headed south and east. Those who did might have been less like raiders and more like traders. These ‘Volga Vikings’ headed down the Volga River (in present-day Russia) to the Caspian Sea, which would have put them closer to trade routes where crucible steel would have been available. Historians theorize that the Vikings either acquired the steel itself from a place along this trade route or learned the technology to make Ulfberht swords and kept it a closely guarded secret for 200 years.

Archeologists have found some swords with the “Ulfberht” mark that are fakes, indicating that they’re likely was an illicit black market for swords that would have seemed to have an almost supernatural power. (For an thorough analysis of which swords have steel and which do not, check out Alan Williams’ analysis in Gladius.) “It must have been an appalling moment when a Viking [realized] he had paid two cows for a fake designer sword; a clash of blade on blade in battle would have led to his sword, still sharp enough to slice through bone, shattering like glass,” writes Maev Kennedy in The Guardian.

Archeological records indicate that Ulfberht swords burst onto the scene in 800 and just as abruptly disappeared in 1000. We’ve found no Ulfberht swords beyond the 1000-year mark. Maybe the trade route that had been providing the crucible steel dried up. Or maybe, the group of Vikings who’d learned the technology died out.

We’ll probably never know for sure. The Vikings were a clever, ingenious people who were shrewd navigators and great story tellers. But they weren’t exactly writerly or bookish sorts beyond the occasional rune. (Interestingly, they were graffiti artists. I’ll never forget the uncanny feeling of seeing Viking runes at Hagia Sophia in Istanbul. Those Vikings really, really got around.)

For more about Ulfberht swords, check out this Thinking Sideways podcast episode.