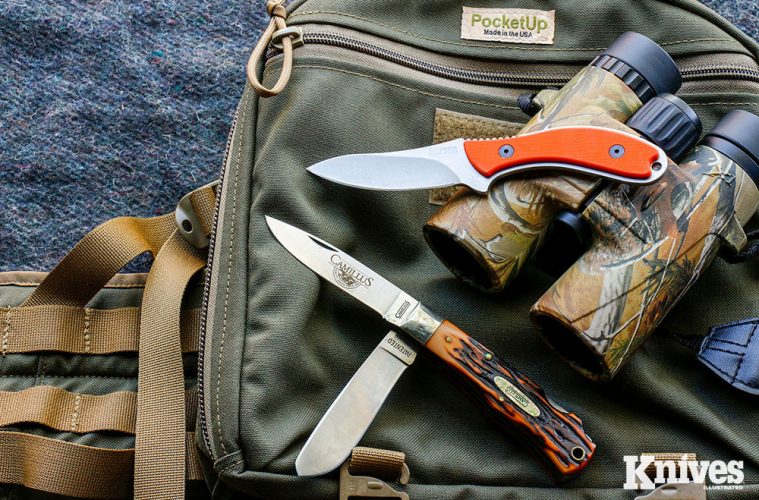 Mention “hunting knife” to someone who’s not a knife enthusiast and most likely some humongous fixed blade comes to mind. Mention hunting knife to a hunter and you’ll usually get quite a different picture.

Whitetail deer, squirrels, and rabbits were regular menu items in my household during the early, low-income days of my adult life. Hunting was more than recreation; it was a way to put meat on the table. Over time, I formed some preferences on the types of knives I carry while hunting. Here’s my thinking on the subject:

You don’t need a machete or a Bowie knife to field-dress a deer. Generally speaking, blades in the 2 ¾- to 4-inch range are usually the handiest for the job, although those aren’t strict limits. A non-slip handle with enough room for all your fingers is recommended. I prefer a narrow hunting blade, which is better suited during the field-dressing process when, how should I say it, you’re working at freeing the terminal end of the animal’s digestive tract. 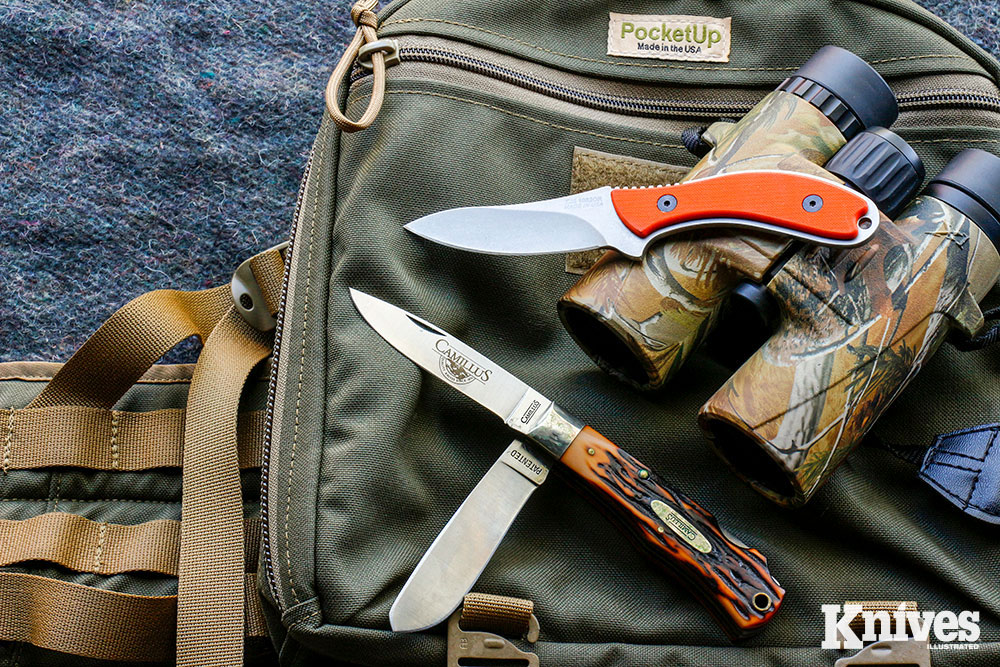 Hunting knives can vary greatly. They can be large or small, fixed or folder. Once you find one you like, hold on to it. Shown are a Kershaw 1082OR Field Knife (top) and an old Camillus two-bladed lockback.

As far as the blade configuration is concerned, I know countless writers before me have said a drop-point is best because there’s less chance of cutting into the messy organs than if you were using a pointy hunting blade. Naturally, I have to be contrary. I’ve always favored a slight clip-point or trailing-point blade. The reason is that I often use the upswept tip when—without getting too graphic—I’m up to my elbow in the carcass cutting the windpipe free. Oops, I guess that was graphic, sorry.

Folders are a good choice for hunting when you want to carry your knife in a pocket as opposed to on your belt or in your pack. I’d suggest a simple locking mechanism—not an assisted opener or auto. An open back is a plus because it will be easier to clean later, but many of my favorites don’t have that feature. 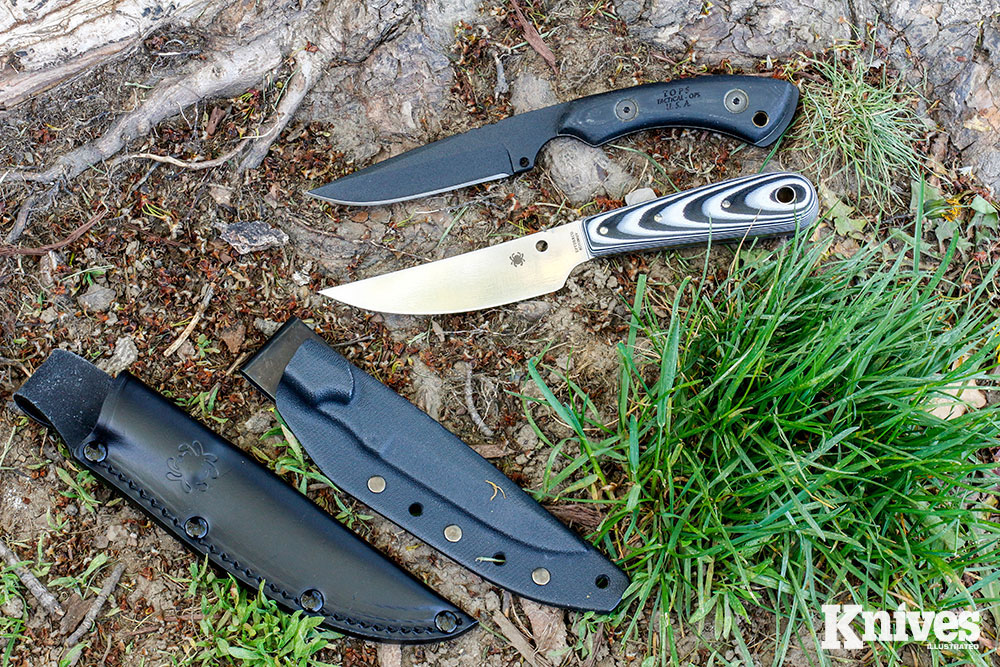 Hunters often prefer fixed blade knives because they’re easier to clean after the messy task of field-dressing game. Shown are a TOPS Skinat (top) and a Spyderco Bow River, two of the author’s favorites. 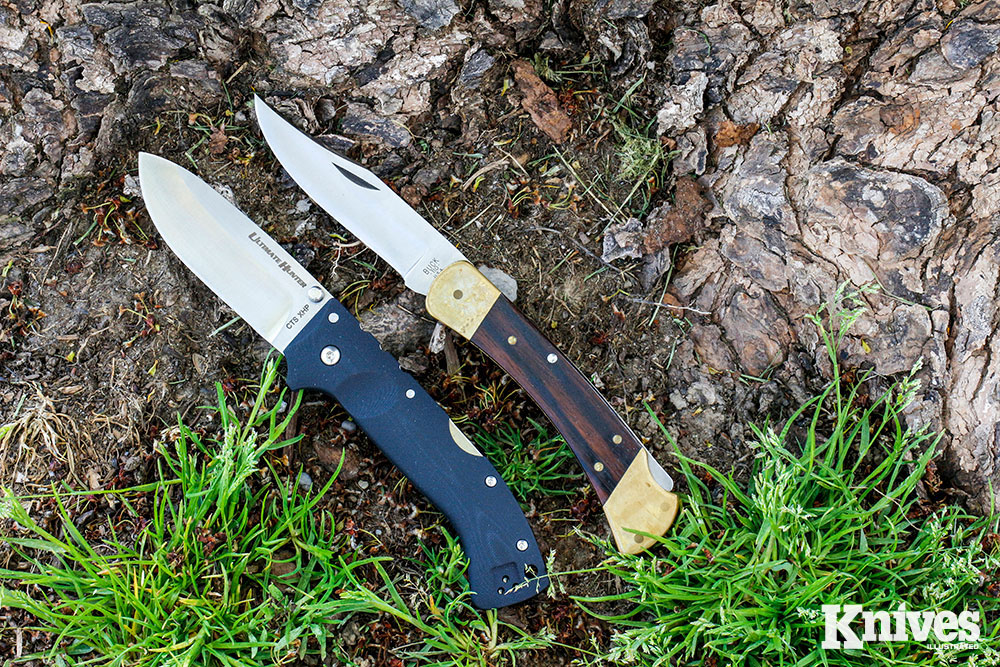 A knife such as the Buck 110 Folding Hunter is timeless. The CRKT Homefront is excellent because it can be completely disassembled without tools for cleaning and maintenance. Don’t overlook the knife you’re carrying this minute. Many EDC knives—the Spyderco Endura and the Hogue Doug Ritter RSK MK1-G2 for instance—would be fine as hunting companions. Other current production folders I like are the Cold Steel Ultimate Hunter and Victorinox Hunter Pro Alox.

Fixed-blade knives are strong, easy to access, easy to clean, and you don’t have to be concerned with it folding on your fingers. Again, you don’t need a really large blade. Actually, knives labeled as “trout and bird” knives or “capers” usually work great and handle better in tight quarters. I find the gut hooks incorporated on the back of many hunting knives these days to be unnecessary and in the way at times when using the knife for other tasks. And I think they’re ugly too, but that’s, as they say, in the eye of the beholder. 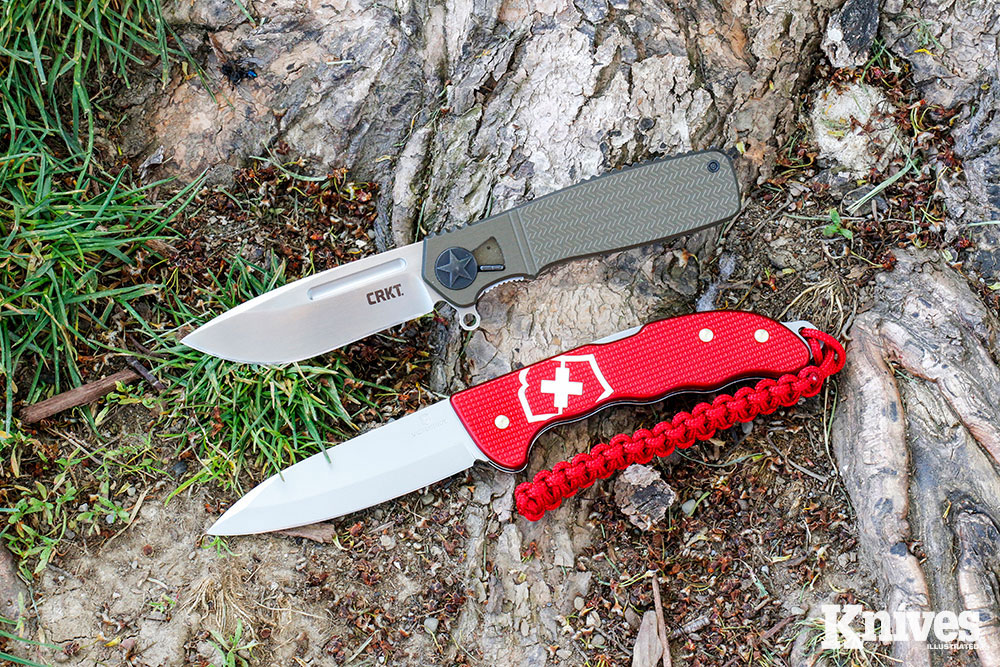 Among the author’s favorites of current production folding knives for hunting are the CRKT Homefront (top) and the Victorinox Hunter Pro Alox. 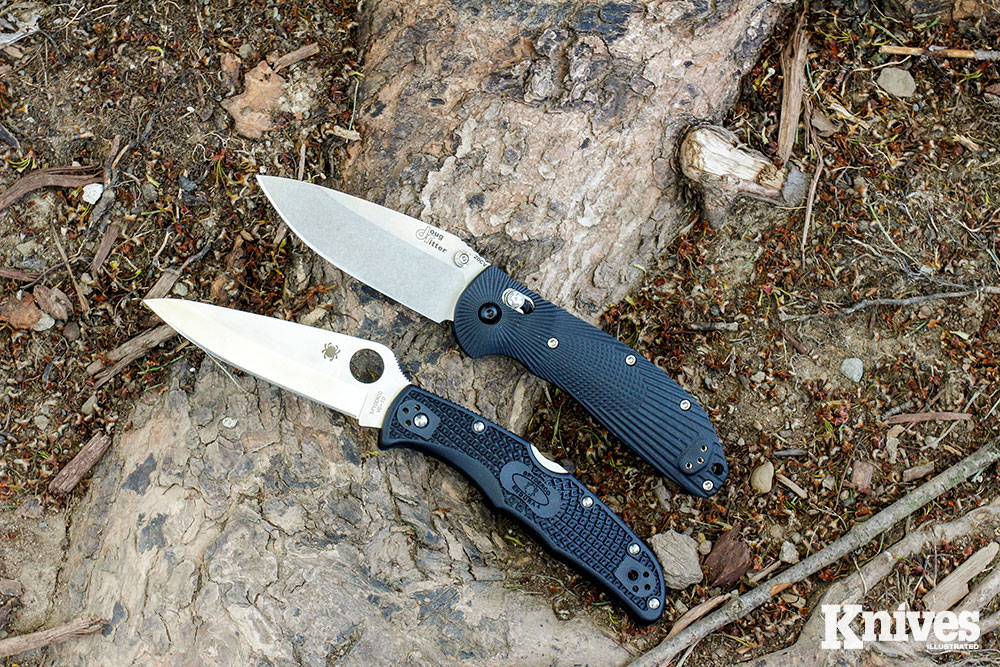 Don’t discount your EDC knife for hunting. Some, such as the Doug Ritter RSK MK1-G2 by Hogue (top) and the Spyderco Endura, can perform very well on most any cutting task.

The drop-point TOPS Skinat is one of my favorite all-around knives, and I’ve often carried it and used it when hunting. I only have two of them now, but I want a third, even though the first one has several generations of hunters to serve before it’ll ever be retired. The Spyderco Bow River with slight trailing point is an affordable knife with thin blade and comfortable handle perfect for use in processing downed game. I’ve used the Buck Woodsman many times, but I’d prefer it if the clip-point wasn’t quite so upswept.

For cleaning squirrels and skinning rabbits, I’ve often used traditional, slip-joint pocketknives. I’ve never needed anything more specialized. If you feel more comfortable with a knife that has a locking blade, that’s fine. But with small game, the cuts are fewer. Often you’re pulling off the hide. Early on I used Old Timers made by the old Schrade company. These days I opt for Case knives, especially the three-blade Stockman, two-blade Barlow, and two-blade Trapper. 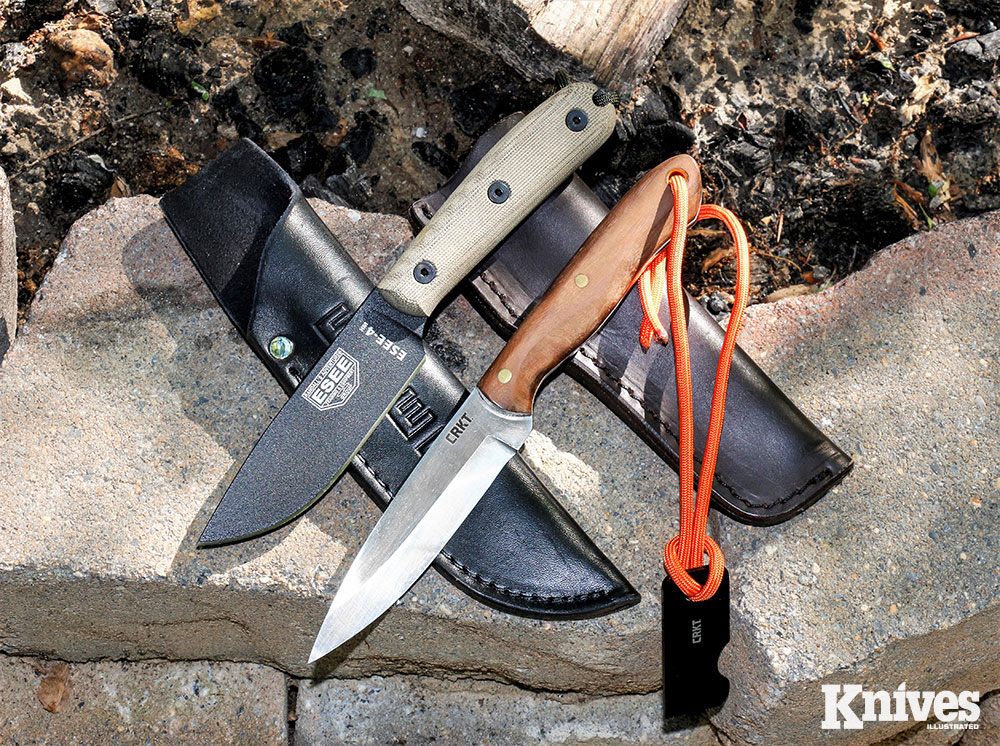 You can do more with a bushcraft blade than whittle a spoon. Many, such as the ESEE-4 HM (top) and CRKT Saker, could be used to field-dress big game animals. 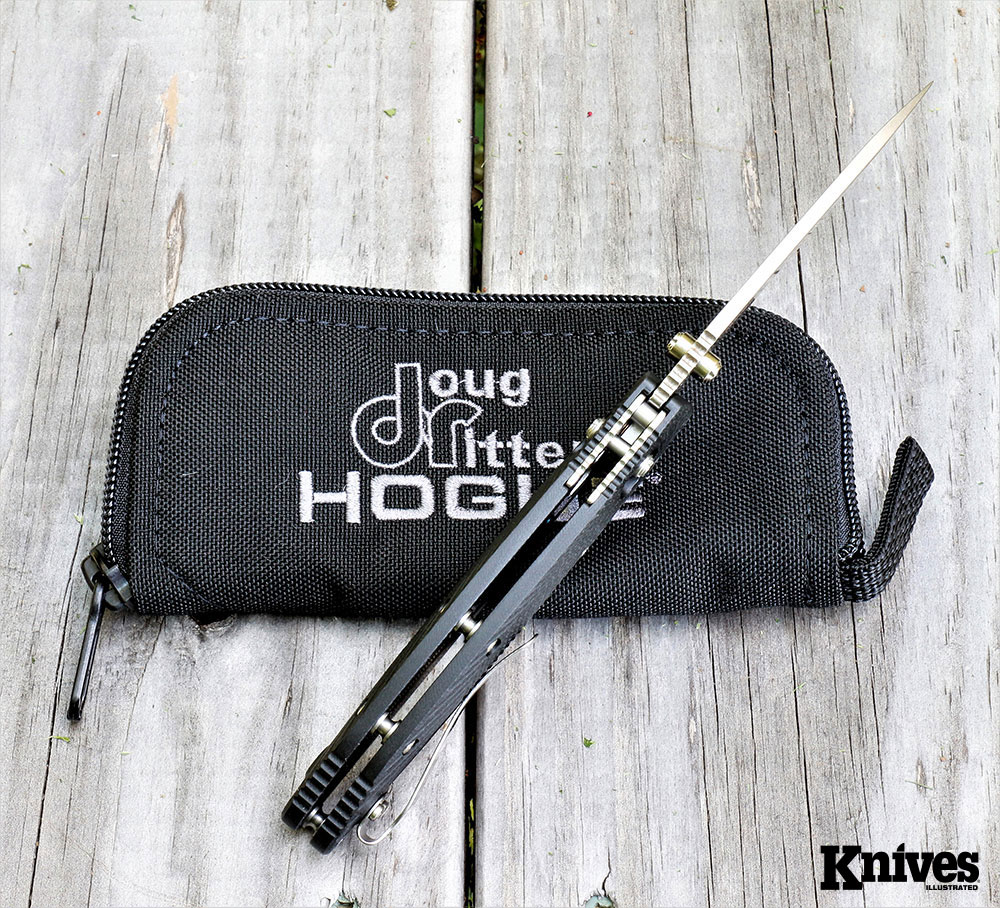 The open back on this Hogue Doug Ritter RSK MK1-G2 makes it easier to clean after messy work and helps to keep debris from building up inside the mechanism.

When you find a favorite hunting knife—and for you it might just be something totally different than anything I’ve mentioned here—buy two of them. Once you designate one of your knives as a “favorite,” there’s a good chance the company will discontinue it.

“Generally speaking, blades in the 2 ¾- to 4-inch range are usually the handiest for the job…” 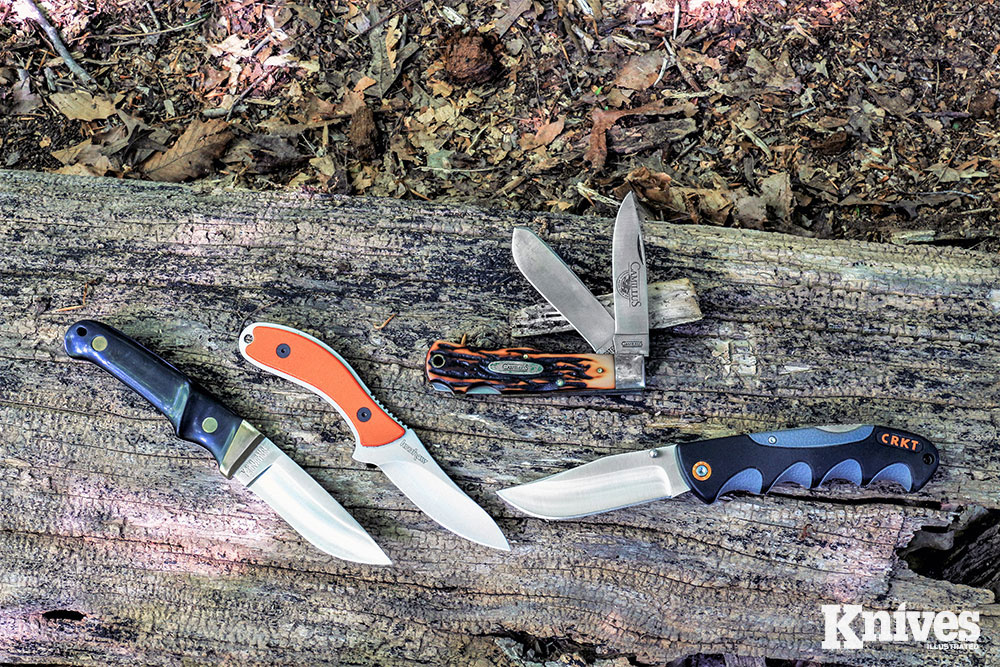 Unfortunately, many of the author’s old favorites have been discontinued. Shown (from the left) are: Schrade PH 1, Kershaw 1082OR Field Knife, Camillus two-blade lockback, and CRKT Kommer Free Range Hunter Folder. 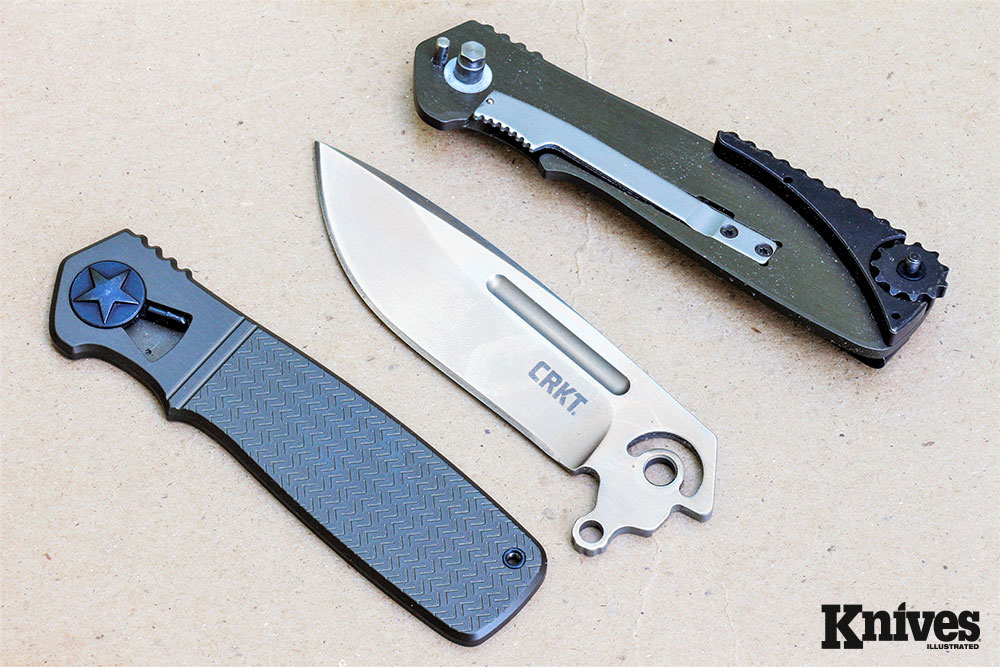 An advantage of the CRKT Homefront as a hunting/field knife is that it can be taken apart without tools for cleaning and maintenance.

The Kershaw 1082OR Field Knife had a super-sharp, well-contoured thin blade and easy-to-spot orange handle. As soon as I fell in love with it, they disappeared from the face of the earth. Do you hear me Kershaw? Bring it back.

The CRKT Free Range Hunter Folder designed by Russ Kommer that I love also is no longer made. I had other favorites too that were discontinued because the company vanished. A Canal Street Cutlery fixed hunting blade comes to mind.

You can save some money by butchering wild game yourself. I’ve often used a set of Buck fixed blades—Woodsman, Pathfinder, Skinner, and Special—to assist. A fillet knife or other thin blade is handy too for removing the back straps and tenderloins.

Lately, I’ve been using some knives from the TOPS Dicer Series. These are excellent knives that truly bridge the gap between camp and kitchen and can be used for every step of the butchering and food prep process. 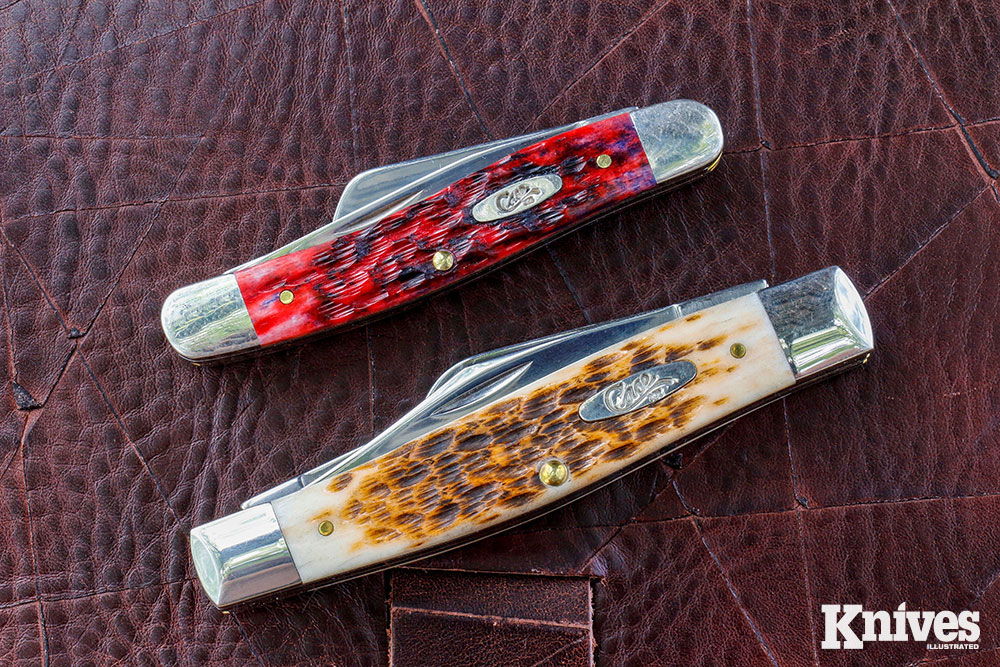 You don’t need a specialized knife for tending small game in the field. For game such as rabbits and squirrels, the author frequently used what was in his pocket at the time, such as one of these Case three-blade Stockman models.

Keep in mind that you might employ your hunting knife for chores other than cutting meat, such as processing tinder, cutting cord or rope, as well as myriad survival tasks. For that reason, if I choose a very thin blade for field-dressing, I’ll often carry a heavier hunting blade for bushcraft chores. 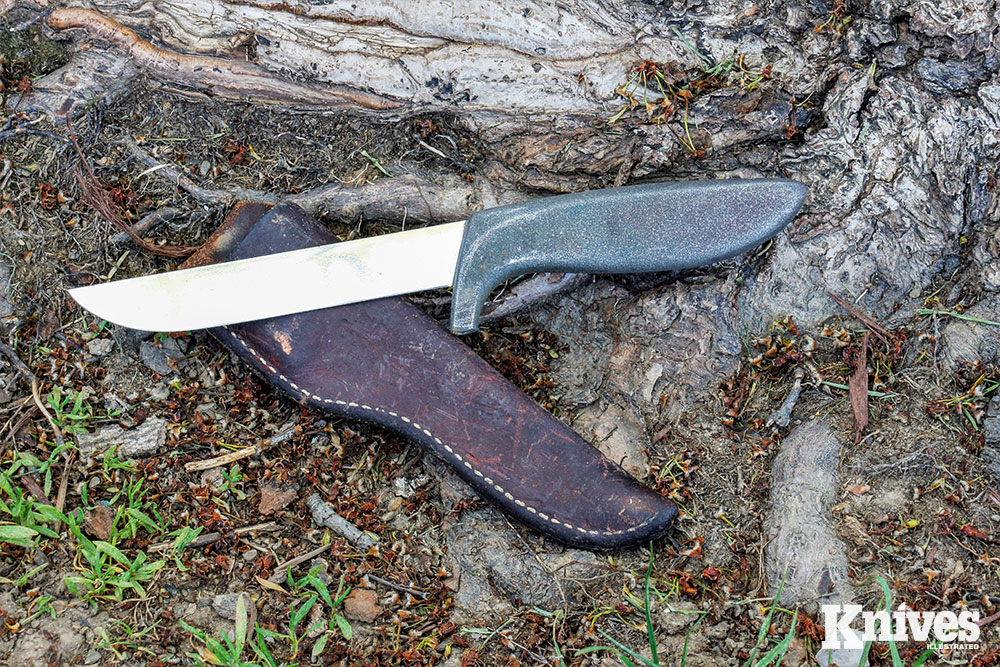 This Gerber Shorty once belonged to the author’s father-in-law and has great sentimental value. The author field-dressed his first deer with it. It’s still an excellent hunting knife. An original Schrade Sharpfinger, while an inexpensive blade, holds lots of memories for the author. He bought a second one just to have it while they were still made in the U.S.

Whichever knife you choose, take care of it and you’ll infuse it with many fond memories of times afield. For me, there’s the Buck 110 Folding Hunter that was my first real hunting knife; the made-in-the-U.S. Schrade Old Timer Sharpfinger that was a gift from my wife when we were young and on a tight budget; and the Gerber Shorty aluminum-handled fixed blade that belonged to my father-in-law. What hunting knife stands out in your memory? The hunter’s knife work doesn’t necessarily end with field-dressing. The author saved a lot of money over the years butchering deer himself. Shown (from the left) are the Buck Woodsman, Pathfinder and Skinner, and
the Benchmade Nestucca. And yes, that’s beef, not venison in the photo.