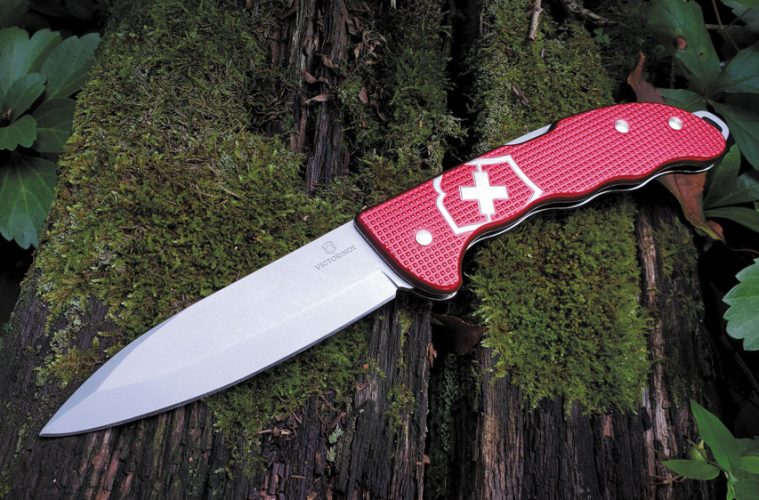 Victorinox knows something about building rugged knives designed for the field. They’ve been making knives for various militaries, most notably the Swiss, but also the German and Dutch, amongst others, for well over 100 years. While they had a strong history of military and outdoor knives in 2013, they jumped into the hunting market with the first Hunter Pro model, which featured a single one-hand opening blade, a back-lock design, and either orange or black polyamide scales. They followed it up in subsequent years with the silver Alox-handled Hunter Pro M Alox, and a wood-handled model without the one-hand opening feature. 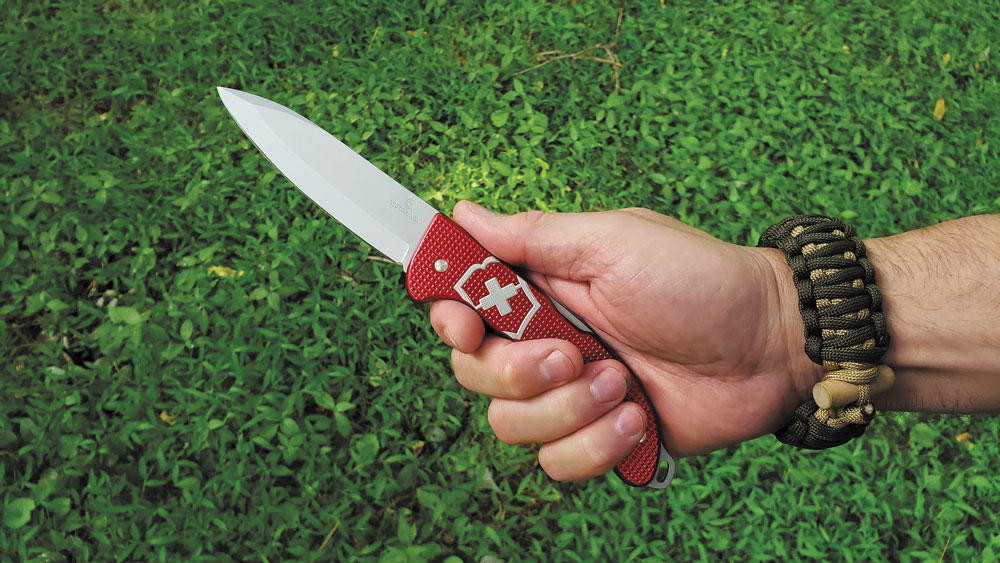 The Hunter Pro has a full-size handle that provides plenty of room for a good, solid grip.

Victorinox has named the latest knife in the Hunter Pro line simply Hunter Pro Alox. It’s a return to the classic red color scheme for which Victorinox is so well-known. 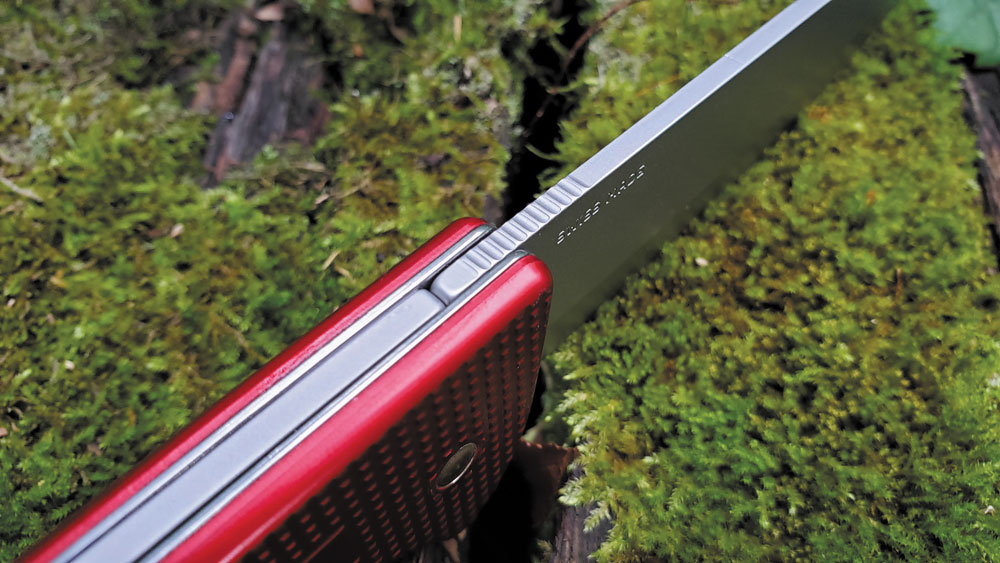 The spine of the blade features a 1/2-inch section of well-rounded serrations. The serrations provide a resting place for your thumb during use.

The newest Victorinox returns to the rugged and attractive Alox scales featured on their military knives, beginning with the introduction of the 1957 Pioneer knife. Alox scales are punched out of aluminum with an embossed texture and then treated a process called Eloxal.

The process uses anodic oxidation to create a protective layer on the scales and also allows the addition of color. In the case of the 2019 Hunter Pro, that color is Victorinox’s distinctive red. The red contrasts nicely with the silver pins that hold the knife together and also with the stylized Victorinox crest positioned boldly on the left scale of the knife. 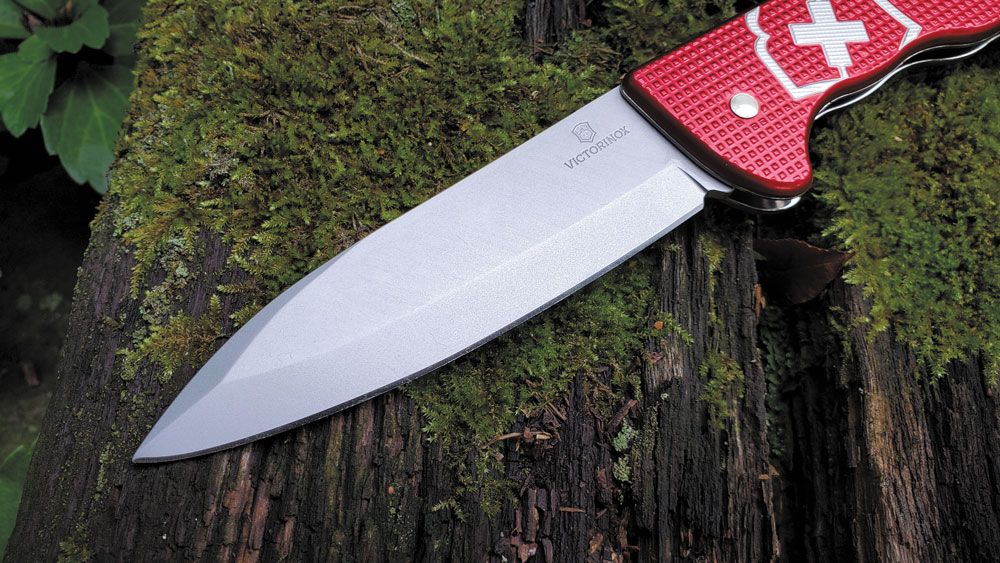 The Hunter Pro has a 4-inch, drop-point blade.

The bead-blasted, drop-point blade is a full 4 inches long, and features a saber grind and an unsharpened swedge on the last 1 ½ inches of blade. The Hunter Pro has a ½-inch section of fine thumb serrations at the base of the blade. Blade markings are classy and understated with a simple “Swiss Made” on the right blade flat and “Victorinox” under the Victorinox shield on the left side. 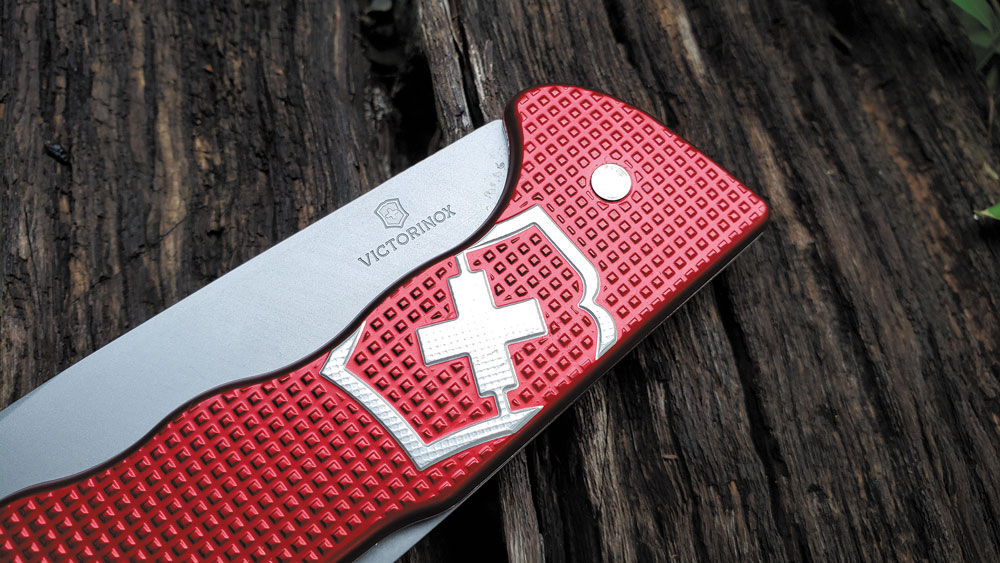 Victorinox engraves a subtle and tasteful Victorinox logo into the blade of the Hunter Pro, and boldly emblazes a Victorinox crest on the knife’s scales.

The 2019 Hunter Pro uses a two-handed opening system and has no blade hole or even a nail nick. To open the knife, you simply grasp the blade flats between your thumb and index finger and pull it open until you hear the lock engage.

I found that if the blade was dry, I could roll it open one-handed. I started the blade open by pinching it between my thumb and the first two fingers of my right hand, then put pressure on the blade with my thumb, but it’s a less-than-sure method. You’re better off opening the knife with two hands, as it’s designed. Victorinox offers it this way as a variation to the one-hand models for places where law prohibits one-hand models. 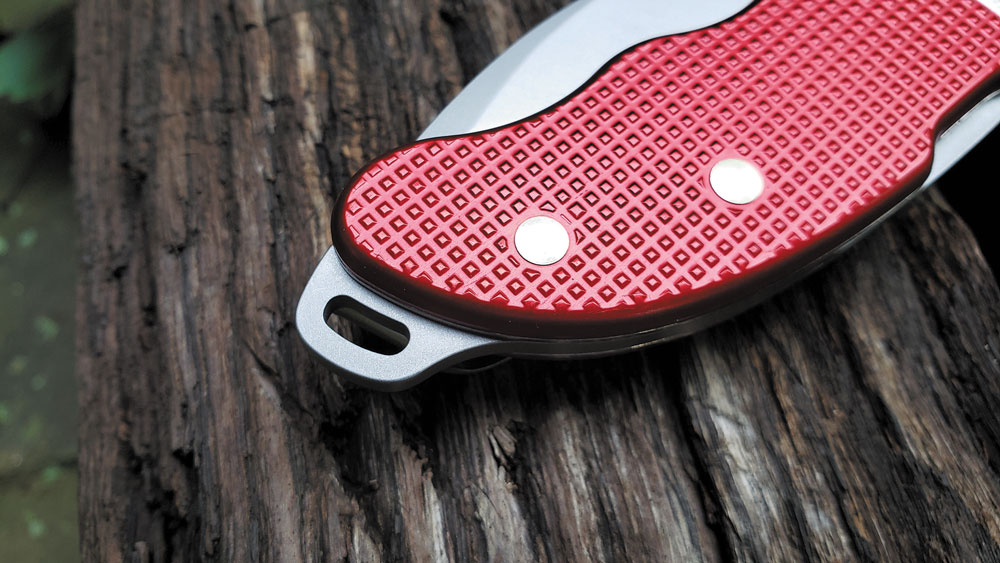 Victorinox fit a sturdy lanyard ring to the butt of the Hunter Pro.

If you’re a regular reader of Knives Illustrated, then you’re probably a knife person and would like to know the blade’s steel type. Well, Victorinox only ever lists their blades as “stainless steel,” which is not as helpful as it could be, since there are so many varieties available. Internet sources list the steel as 1.4110 stainless steel, at a Rockwell Hardness of 56. That’s roughly equivalent to US AISI 420 stainless steel. It’s not one of the latest wonder steels by any means, but just as Buck has perfected the heat treat on their 420HC, so too has Victorinox with their steel. It performs better than you’d expect for the steel properties and has worked quite well for decades.

I suspect most folks who carry a Swiss Army Knife never think about what the steel is and are quite happy with its performance. It isn’t S30V or some other high-end steel, but it holds a decent edge and is easy to sharpen without special tools when you need to.

A simple and elegant “Swiss Made” stamp on the blade tells you the Hunter Pro is made in Switzerland, just like all Swiss Army Knives for the past 135 years.

The Hunter handle is well-countered and comfortable. It’s devoid of sharp edges, which could cause hot spots, but still affords a solid grip due to handle shape and the embossed pattern of the Alox scales. The 6.2-ounce weight of the knife allows it to sit solidly in hand and gives you a sense of confidence in its build. 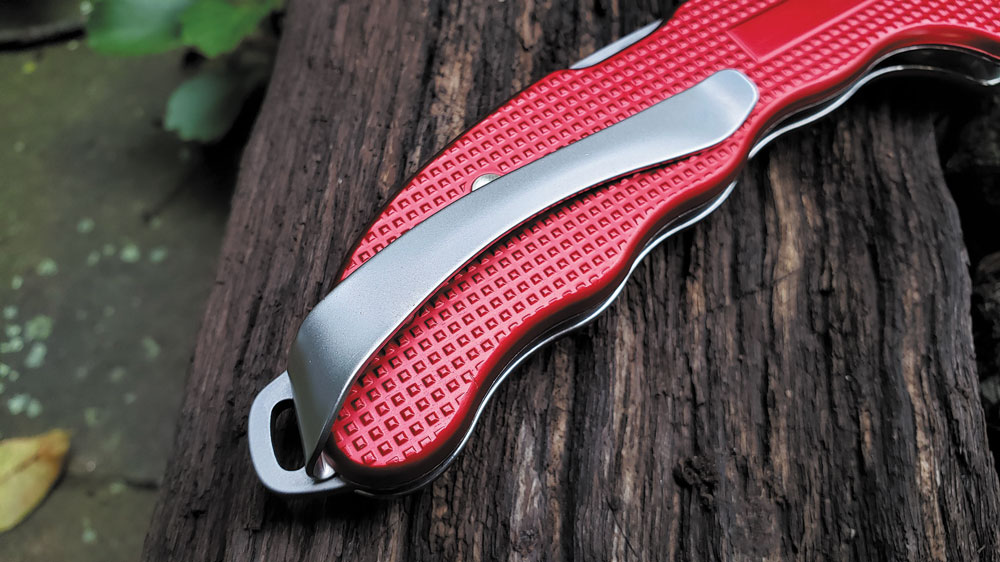 The Hunter Pro’s well-designed pocket clip allows the knife to sit deeply and securely in your pocket.

The knife’s right side has a blank rectangular area suitable for engraving. It has a graceful deep-carry pocket clip, situated for tip-up carry. 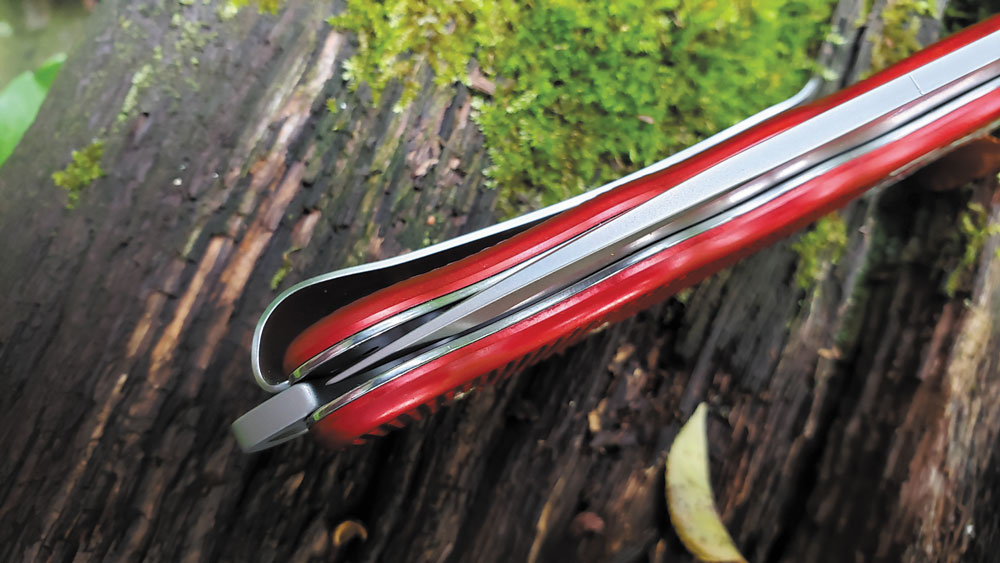 The Hunter Pro’s blade centers well in the frame.

The scales are pinned to a stainless steel frame and enclose the sturdy back lock mechanism. The 4-inch blade is well-centered when closed and locks up solidly with no lateral or vertical play when opened. It seems to be a much more substantial lock than the liner lock found on the 111mm knives such as the One-Hand Trekker. A stout lanyard hole is on the pommel of the knife and an attractive red braided paracord lanyard is included with the knife in the box.

“While many of us think of a fixed blade knife when we think of hunting knives, there is certainly a camp of hunters who would disagree. Just look at the millions of Buck 110 folding hunting knives sold since 1964.”

Victorinox always has good edge geometry and the blade sliced cleanly and easily through these materials. The single-blade design, and the Alox and stainless steel construction, made clean up easy, too. I washed the knife out in the sink with soap and water and left it open to dry. I later re-oiled everything. 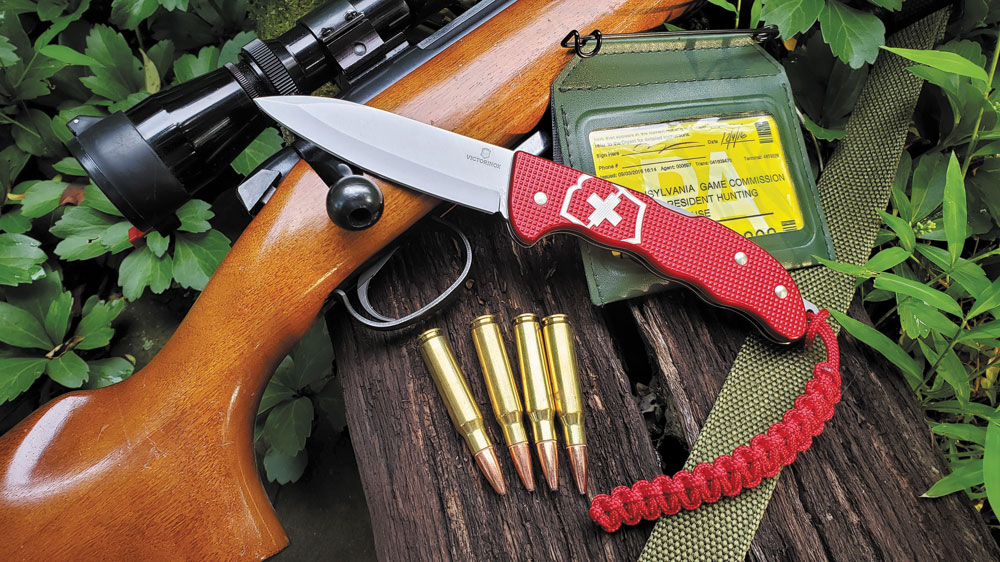 The Victorinox Hunter Pro is a rugged, weather-resistant tool for the hunter in the field.

A hunting knife often does double-duty for other camp chores as well, and I got a chance to carry and use the Victorinox Hunter Pro Alox for general utility work, including cutting rope and cordage, cutting plastic banding straps, and opening various boxes and packages. Although some folks prefer a serrated edge for rope work, I found the Hunter Pro’s plain edge worked just fine. If you keep a good edge on your knife it will cut fibrous materials, like rope, without issue. 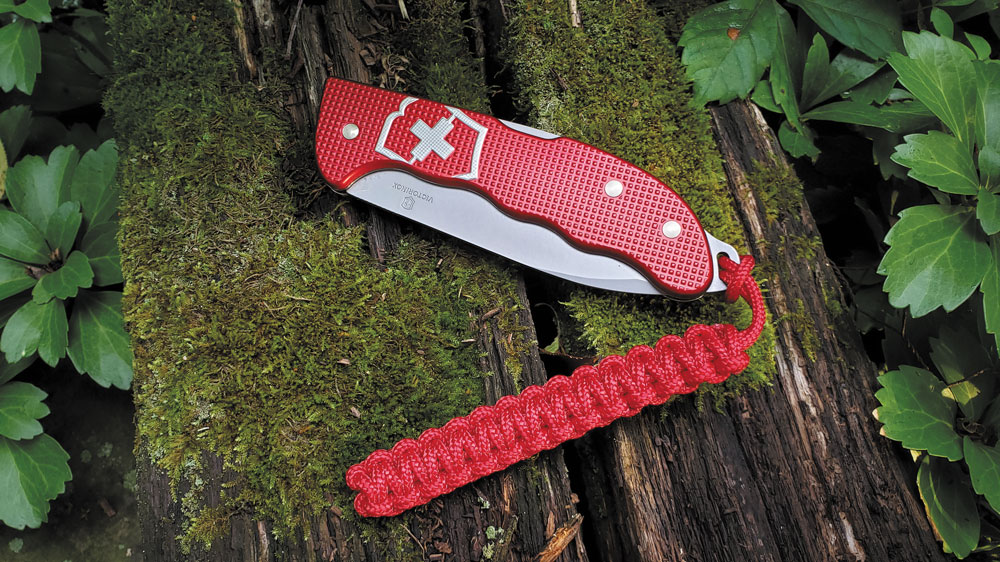 The Hunter Pro ships with a red, braided paracord lanyard that you can attach.

For edge maintenance, I used a leather strop with honing compound to touch up the blade after use. Light blade maintenance on a regular basis keeps the edge in good shape and minimizes the necessity for a full resharpening as often.

“I SUSPECT MOST FOLKS WHO CARRY A SWISS ARMY KNIFE NEVER THINK ABOUT WHAT THE STEEL IS AND ARE QUITE HAPPY WITH ITS PERFORMANCE.”

Hunting, Hiking or Anything in Between

I’m a big fan of Swiss Army Knives for outdoor work and have used a number of models as woods knives over the years. I have to say the Hunter Pro Alox is definitely a step up in ruggedness and durability. If you aren’t a hunter, it would make a great EDC blade for heavier chores and a very good folding bushcraft knife, as well.

The blade is 0.11 inch thick, which is a fair bit stouter than the 0.063-inch-thick blade of a One-Hand Trekker. The blade is nearly as thick as the Mora Companion Heavy Duty. With an MSRP of $99.99, the Hunter Pro is a tad more than the Tinker’s and Spartans that you might normally associate with Victorinox, let alone the handy little Classic that just about everyone owns. But the Hunter Pro is a hefty tool. It will withstand the rigors of the hunting field for many years to come.

One of the most amazing things about Victorinox knives is their versatility. Versatility in the tools they offer and the customization they afford. They have a classic style, yet they adapt easily to modern times. My dad gave all the groomsman in my wedding Victorinox Tinkers back in 1993. I know that a number of the guys still carry those knives regularly, 26 years later.

While that Tinker is prized in my collection, one of the SAK’s that stays in my EDC rotation is the very similar Spartan. It has almost the same tool loadout as the Tinker. It swaps out the Philips screwdriver for a corkscrew, which in turn, cleverly holds a small eyeglass screwdriver. My favorite variation of the Spartan has yellow scales. I got it from Poland a decade or more ago. For whatever reason, the yellow scales aren’t available on that model in the U.S. But thanks to the beauty of the internet, I was able to track one down online.

Recently I decided that I wanted a backup to that Spartan, just in case. So, off I went to the net again to find another yellow one. I didn’t find a plain yellow one this time, but one even more intriguing. Another Spartan, with the yellow scales I liked, but it had the blue trident emblem of the Ukraine. I ordered one up, straight from the Ukraine, and had it in my hands about a week later.

Victorinox has always done an amazing job of offering limited runs for various public and private groups. These include handle scale colors and designs, and specialized logos. They even do special toolsets, like on the FASS 90, a knife designed with a special sight-adjustment tool for the Swiss Stgw 90 rifle, or the old 108mm German Army Knives issued to the German military. The end result is a myriad of models suitable for nearly any use, and a wealth of variants that is a gold mine for collectors.