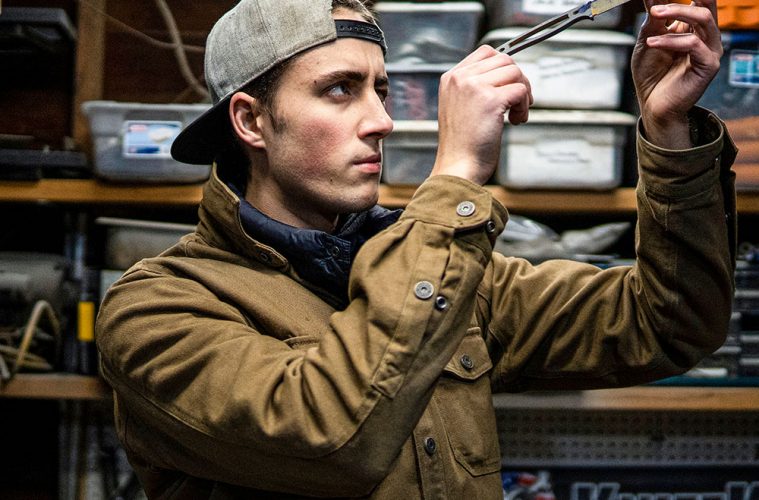 If you set your mind to it, anything is possible! That is the mantra that Alec Wachtman of Wachtman Knife and Tool uses as he works day after day crafting custom knives.

At the young age of 20, Wachtman is already running the company that he created and built himself. Through Wachtman Knife and Tool, he takes old knife designs and adds a new spin to them to create custom knives any knife enthusiast would be proud to own.

As someone who has always wanted to work and create his own business, Wachtman is living his dream. 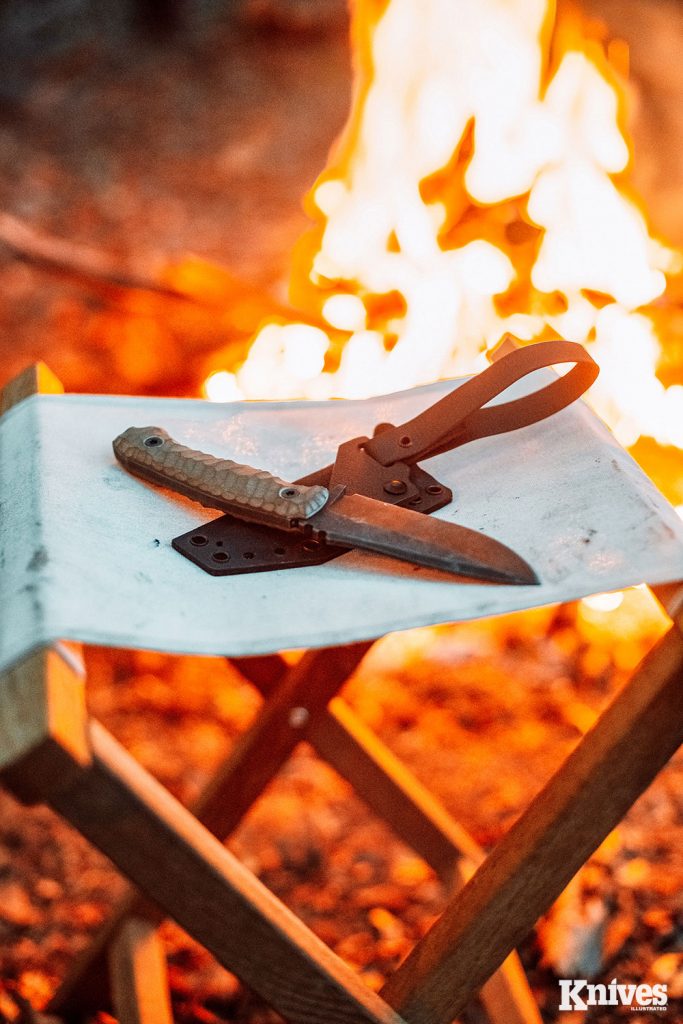 Wachtman inspects his blades and bevels for straightness.

Since 2019, when he founded Wachtman Knife and Tool, Wachtman has been working endlessly to create knives that have a wide appeal. He is committed to providing knife designs that offer something for everyone, from those who are looking for a hunting companion to people looking for an extra assist in the kitchen.

“I create knives for everyone. Everyone needs a knife for something, so I try to make knives that can be used for a wide range of applications,” he said.

His company sells standard EDC blades such as the Eddy 2 and the Kliff too. The most recent addition to the lineup is the Raptor knife. He also creates one-of-a-kind custom blades, working closely with customers so they can receive knives that are as special as what they envision. 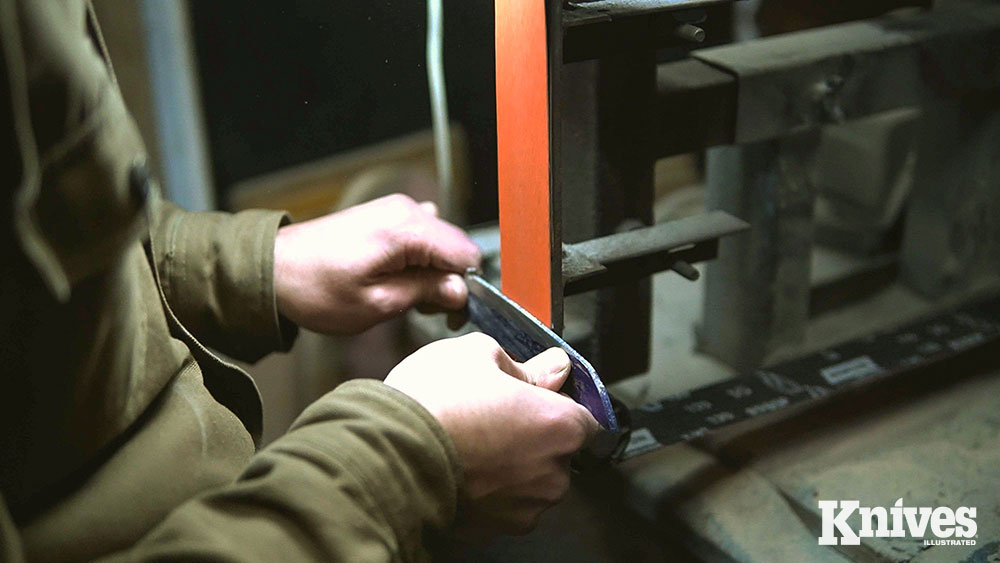 Knifemaking has been in Wachtman’s blood since he was growing up. Both his grandfather and his father treasured knives, and he was always drawn to their collections.

When he was 6 years old, he started his journey into metalworking. He took a leap of faith and with the help of his grandfather, decided to try blacksmithing in his grandfather’s house.

“We attached a hairdryer to a steel pipe and blew air into their fireplace to heat up an aluminum rod,” he said. “I learned two things that night: Aluminum doesn’t get red hot, and blacksmithing was a much more difficult process than the people on YouTube made it out to be.” 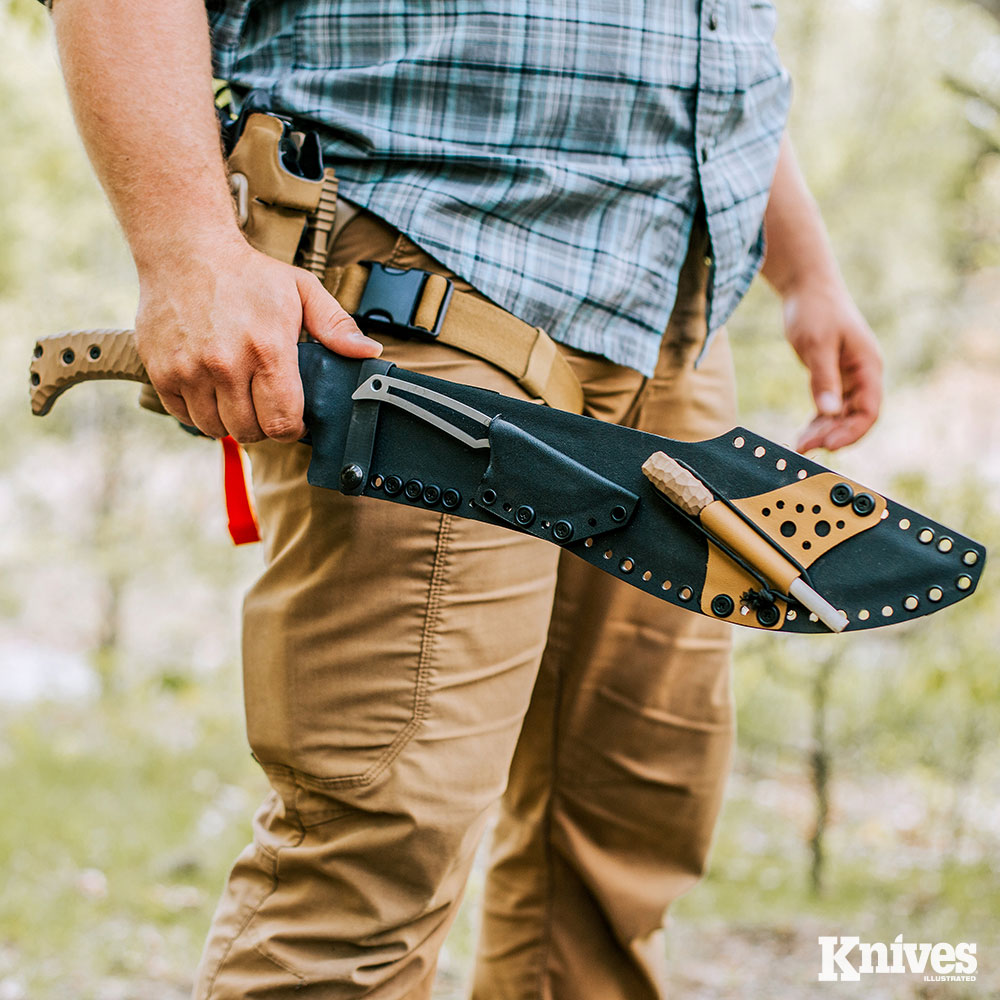 Wachtman is ready to make the custom knife you envision, large or small.

From inspiration on YouTube and an attitude to keep trying, he started looking around for an apprenticeship at different history museums. He met various craftsmen, including John King and Tom and Rick Mohr, who all taught him the skills he needed to start making knives. He learned how to use a belt grinder and started to practice his skills as a stock removal knifemaker. He found the process to be much easier and more precise than the old method he originally learned.

As time went on, he started drawing and designing his own knives. By the age of 15, he sold his very first blade. That first knife that he made to sell was a simple drop-point design. It was decked with orange G10 handles along with a Kydex sheath. The knife was meant to be a bushcraft/survival-style blade.

“At the time, it was only my third or fourth fully finished knife, so the fit and finish were pretty rough,” Wachtman said. “If I were to do it over again, I would’ve practiced more.” 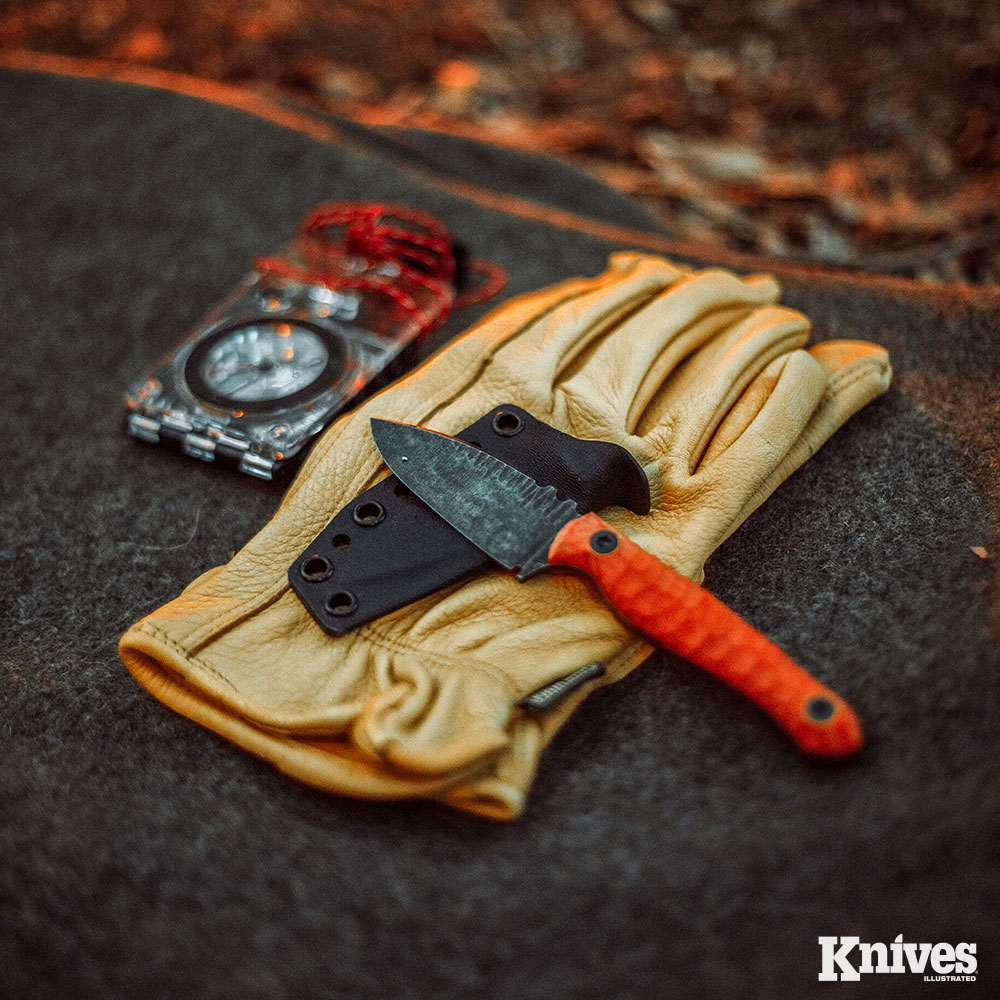 The Eddy 2 is the perfect companion for any outdoor adventure.

Wachtman had grown up surrounded by a family where almost everyone had their own business, so creating and running his own business was only natural.

He founded Wachtman Knife and Tool Wachtman at the age of 18, but he’s the first to admit he has had help along the way.

“Wachtman Knife & Tool is my company, but I wouldn’t be able to run this company today if it weren’t for my family,” he said. 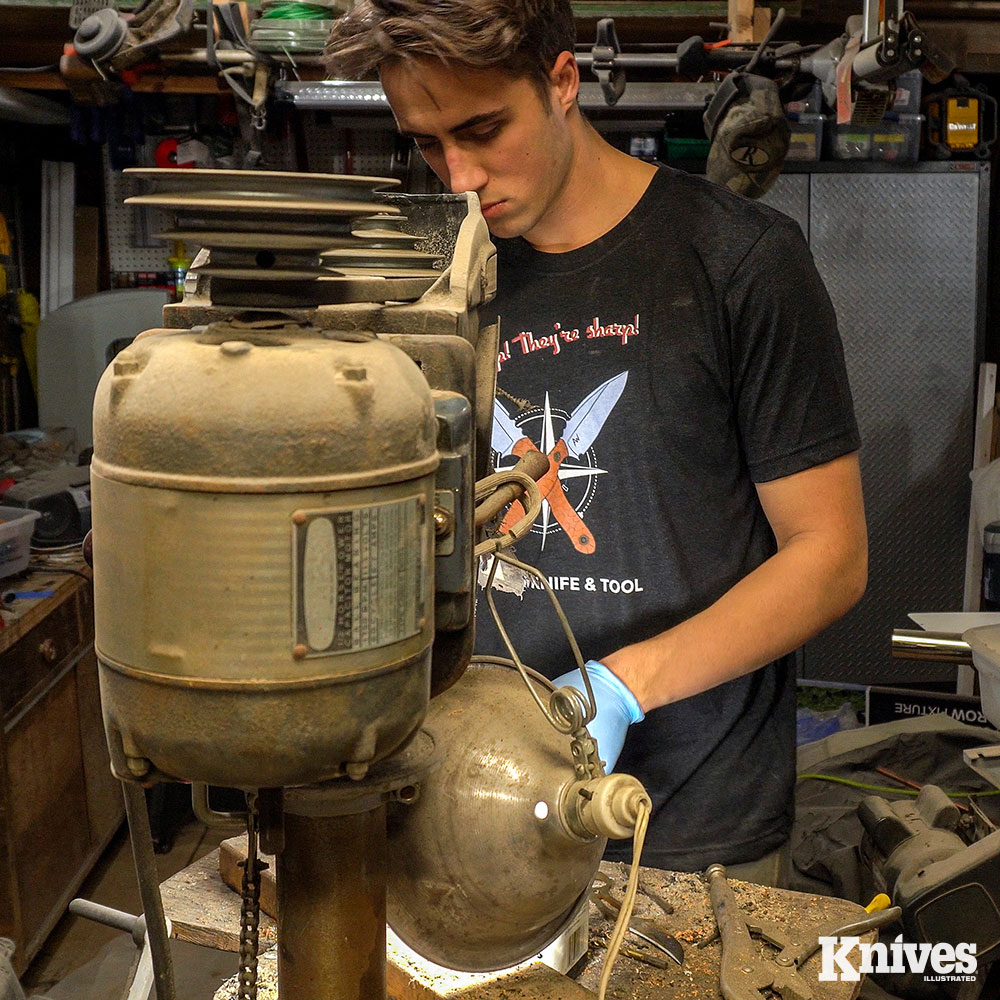 Alec Wachtman often spends long hours in his workshop to fill orders for is custom knives.

For instance, as his career was developing, he was much in need of a belt grinder. Over the course of several months, along with the aid of his grandfather, Wachtman was able to build and create his own grinder that still works and is a staple in his workshop to this very day.

He also had help from family members who have lent their expertise in PR, logistics and content creation to market and sell his products. With a little help and a lot of inspiration, Wachtman is turning his fledgling company into an American success story.

A DAY IN THE LIFE

Wachtman’s typical day in his workshop doesn’t necessarily begin as the rooster gives the wake-up call. He also doesn’t work a typical 9-5 job. His workday might start around 9:00 am and not finish until late in the evening or even early the next morning, depending on what was on the day’s agenda.

When Wachtman first started designing the knives, something that he loved to do was take the drawing he created and bring it to life. More recently, he fell in love with the art of freehand grinding. It helps make the knives feel more unique to him.

“My favorite thing to do is put a new spin on an old knife design. I might change the grind lines, try out a new texture, change the sheath or use a unique handle color, but the knife is still recognizable,” he said. 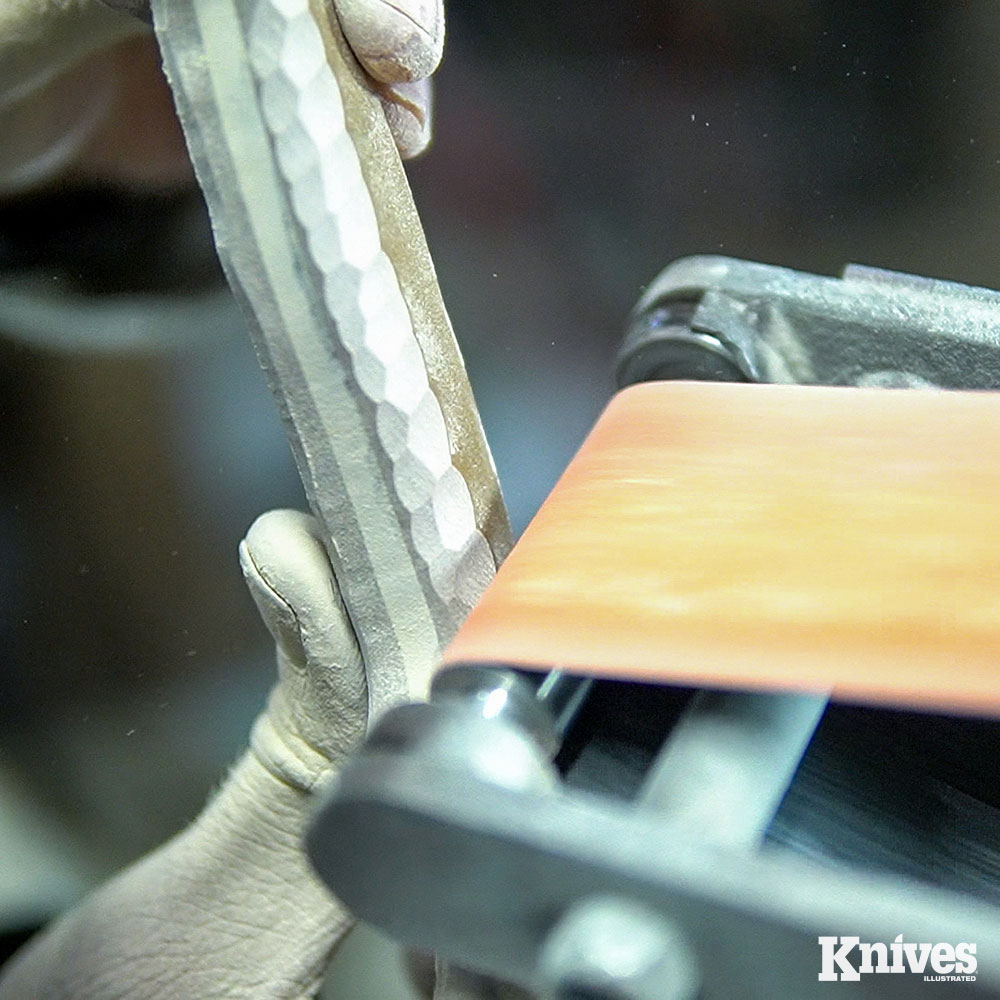 Wachtman puts his own special touches to a knife’s handle scales.

When he is looking for knife patterns, Wachtman looks for unique and visually balanced designs that give off an element of aggression while still being useful tools. For texturing or aesthetic elements, he focuses mainly on the grind of the knife but is also a fan of stone texture and hamon. He also creates custom designs for those seeking the perfect knife.

“Working with someone who is excited about what I do and wants to get my take on a particular blade or use case is always fun for me,” Wachtman said. “The best customs usually happen when someone tells me what they want in a knife and then lets me loose to play.”

Most of the steel for his knives is 80CrV2. It’s one of his favorite blade steels to use because it represents a nice middle ground in carbon steel. Many hobbyists and master craftsmen also use this same steel in their creations.

“It’s an easygoing steel as far as heat treating goes and has some pretty great edge retention in my experience,” Wachtman said.

Growing up, Wachtman was constantly surrounded by the woods and attended different bushcraft events. Carbon steels were preferred and steel such as 1095 and 5160 were chosen frequently. 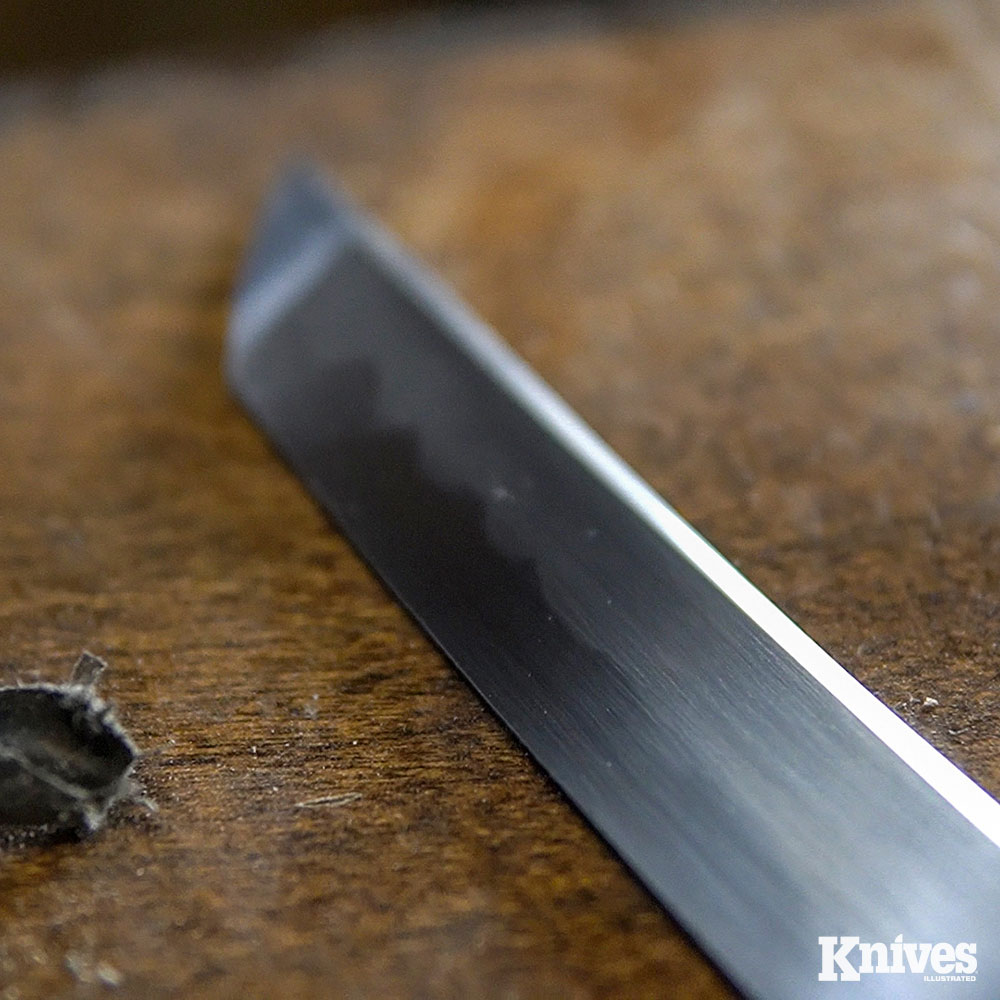 Alec Wachtman works on the first hamon before it gets etched into the knife.

He first became aware of 80CrV2 at a prepper show where a local maker there talked highly of the material. Wachtman first started using 0-1 and high carbon scrap steel until he became aware of this. He made a few blades with the new steel and fell in love with it.

In the future, he would love to get his hands on Vanax Superclean stainless steel and offer DLC coating.

“The ‘black mirror’ effect that you can achieve with DLC is so cool and I’m really excited to get some on a blade at some point,” he said.

Knives aren’t complete with just the blade steel. They need a partner material to help to provide a good grip and fit for your hand. Wachtman uses various materials for his handles, but some of his favorites include G10 and Micarta handles for several reasons.

“When I was considering materials for my first blades, I wanted them to be as durable as possible.”

As he was growing up, most of the knives his family had were made with wood handles. He chose not to use natural materials for the handles on his knives because they tend to be more high maintenance and wouldn’t be reliable in wet conditions. He wanted to change it up and focus his designs on knives that would last a lifetime. 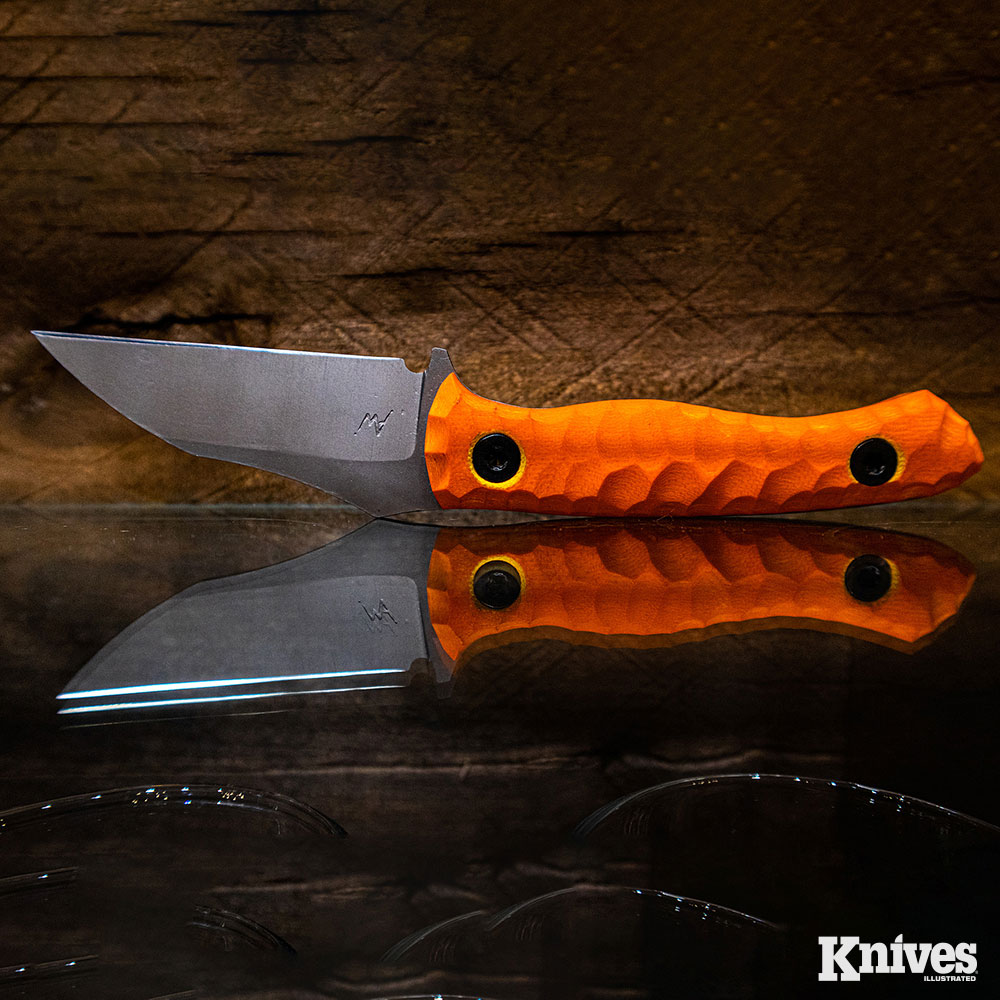 This particular Kliff model is decked out with orange G10 handle scales.

The future is looking bright for Alec Wachtman and his business. As time goes on, he hopes that he can grow his company into a mid- to high-production/manufacturing house.

“I want to get my designs to as many people as possible at a relatively accessible price. I design these blades to be used. If people can’t get ahold of them to test and carry then I’m not doing my job correctly,” he said.

Among his dream knives to design and sell are folders and swords.

“I have makers who I’ve always looked up to in both fields and I would love to add something to each genre of tool,” he said. “I’m dabbling in sword making at the moment and it’s a massive challenge starting out, but the end results are usually really cool.” 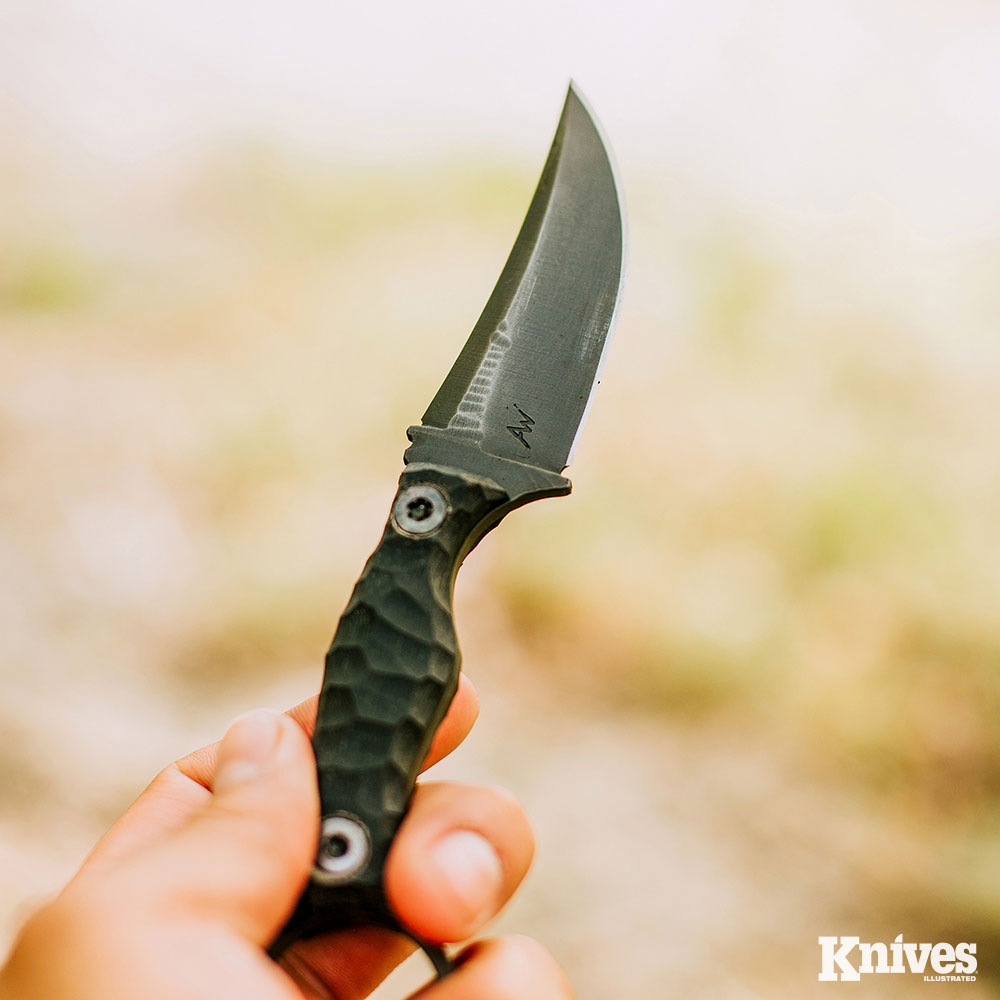 This stone-textured Raptor knife comes with a G10 handle.

He also has some new projects that he is working on that he is excited to debut. There’s not much to reveal right now, but some exciting products will be coming from Wachtman Knife and Tool.

“I have some very exciting collaborations coming up with some big names in the custom knife world as well as some super cool solo projects,” he said.

With hard work and determination, Wachtman has shown that anything you wish and dream can become a reality. To learn more about Alec Wachtman and his upcoming projects, join their mailing list at WachtmanKnifeandTool.com. KI