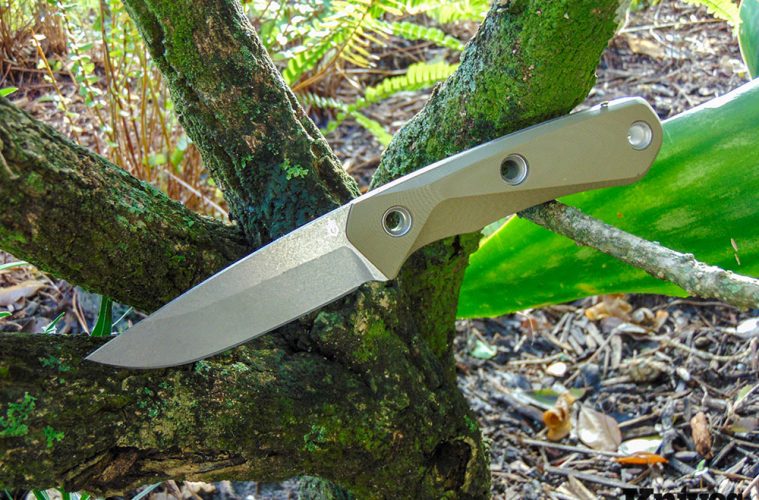 Which style of knife is best, or can there be two winners?

There’s no denying that a knife is one the most important tools a person can carry. That’s rarely in question at all.

However, what does come up for debate is which knife type is better: basic or embellished? Are you better served with a bare-bones basic blade built with quality and durability, or one saturated with a variety of bells and whistles that can perform numerous tasks? 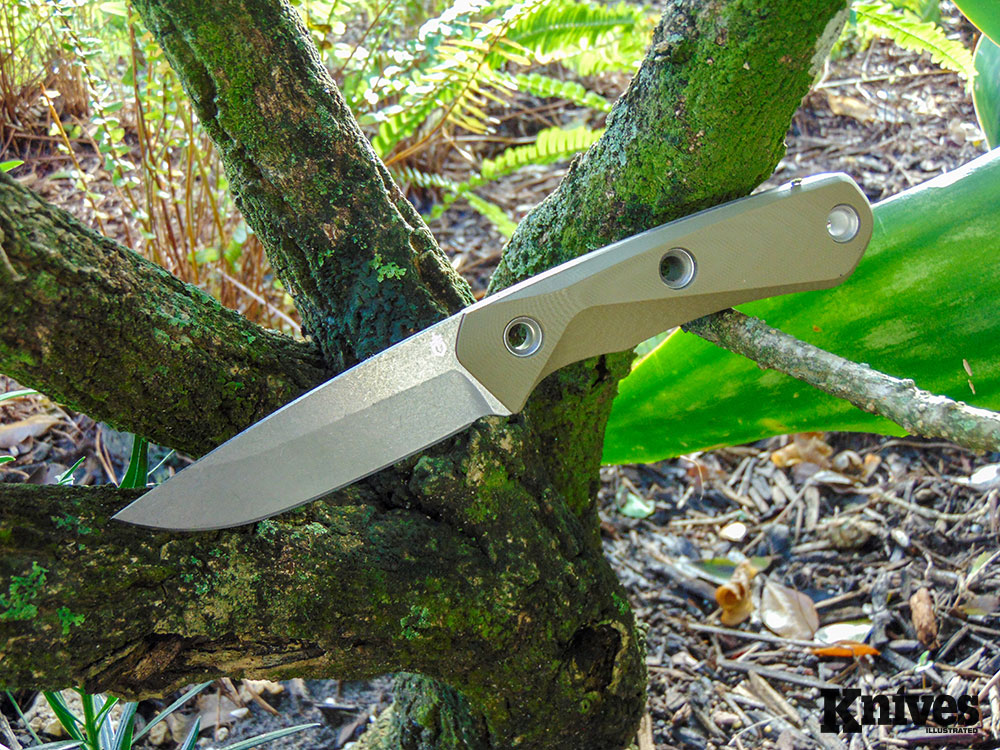 The Terracraft Knife from Gerber Gear is an excellent example of a bare-bones knife, with a simple handle and full-tang construction. Author photo.

On the surface, the answer may seem apparent. More is better, they say. But does this relate to knives? Or conversely, though equally as important, simple designs last longer, and perhaps a standard fixed-blade knife would be the victor.

Here we’ll dissect the two distinctly different knife types and try to determine if one outshines the other or if both have their own respective value based on individual needs.

Before any comparisons can be made or contrasting characteristics can be discussed, the definition of both knives should be clearly established. What is considered a simple knife or one with all the bells and whistles? Simply put, a basic knife is one that performs one primary function, and that’s cutting and, in some cases, stabbing or piercing. That’s the extent of its uses.

Whereas a knife with a lot of added extras may include a saw on the back of the blade, a rounded “hole” area near the handle end for striking ferrocerium rods to create fire, a hollow handle containing a small pouch of survival gear, a compass integrated within the handle, or even a secondary blade incorporated into the design to add greater versatility.

What won’t be included in this discussion are multitools. These jacks-of-all-trades are especially designed to provide multiple tools (hence the name). In the case of multitools, the blade is just one of the items in the bunch, while here the sharp blade is primary, but with added features or extras provided to complement the blade.

They say the more you complicate something, the better chance that it will break down. However, this doesn’t necessarily ring true, at least when it comes to knives.

Whether discussing a formidable fixed-blade knife or one with some added extras, the cliched mantra rings true: You get what you pay for. Cheap is cheap and if you go cheap with a fixed-bladed knife, you’ll soon regret it as it will most likely dull quickly, chip, or may even break at the handle junction. 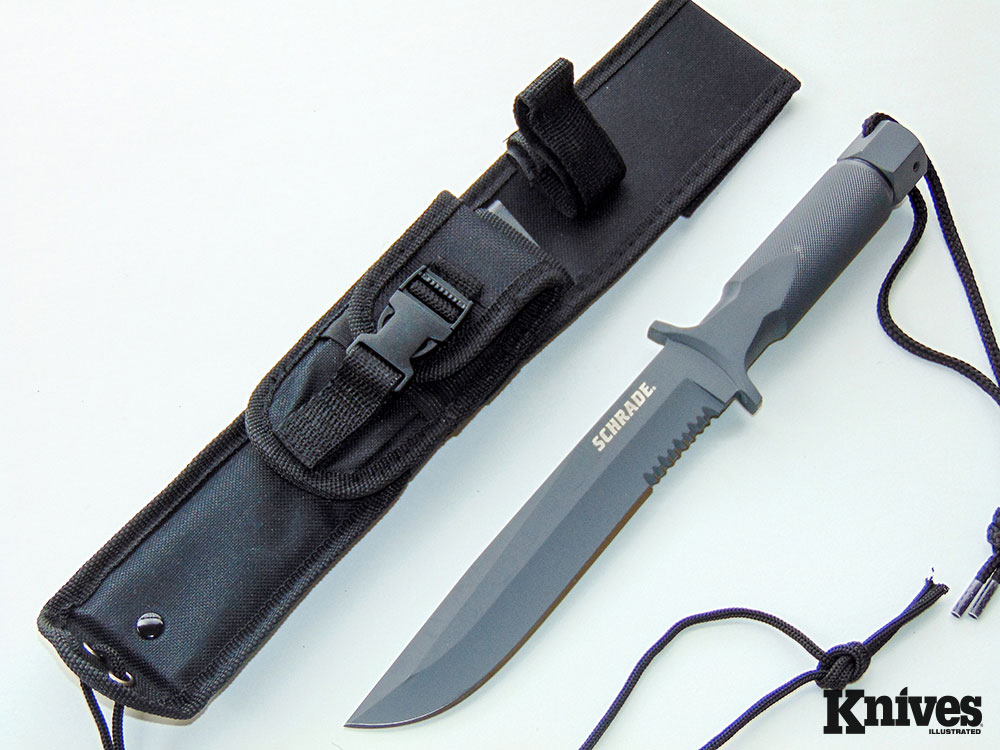 Inside this Schrade hollow-handled survival knife is 10-piece set of bit tools. The downside is that it can add weight to a knife. Author photo.

The same can be said about a well-rounded, versatile knife. If you buy the least expensive, you’ll soon have broken accessories, poor design for accessibility, or simply tools that just don’t work well enough or at all for your tasks at hand.

With that being said, the quality for any tool or piece of equipment is directly proportionate to its lifespan. If you go cheap with either a simple knife or a multiple use knife, you’ll soon be throwing it away and looking for a replacement.

A knife may be your best friend in either a wild or urban setting, but it’s not indestructible. Knife blades snap, chip, and break in two, and their handles can do the same. If you’re carrying only one, single-function knife and that knife breaks, your situation just got a whole lot worse.

“Which is better, a basic version built with quality and durability, or one saturated with a variety of bells and whistles…”

The Strongarm knife by Gerber Gear exemplifies a no-frills knife, but don’t let that deceive you. This knife is built for toughness and longevity out in the field, and it delivers big. Gerber photo.

Yes, you may still be able to use the broken blade, but with severely limited capacity and with the possibility of injury to yourself, and again exacerbating your already bad situation.

If, however, a knife with multiple features happens to break, odds are it would be just one of the many tools that it offers. This way you can still get things done with the remaining additions to your knife.

It’s not difficult carrying a knife of either knife type. However, by carrying a single function knife, you’ll need to have room elsewhere for additional gear or tools, probably the same tools that are integrated within a multiple function knife.

This could include a scraper to start a fire, a mini-survival kit with small items such as water treatment tablets, needles, a mini tool kit, tinder, or a length of fishing line and small lures. 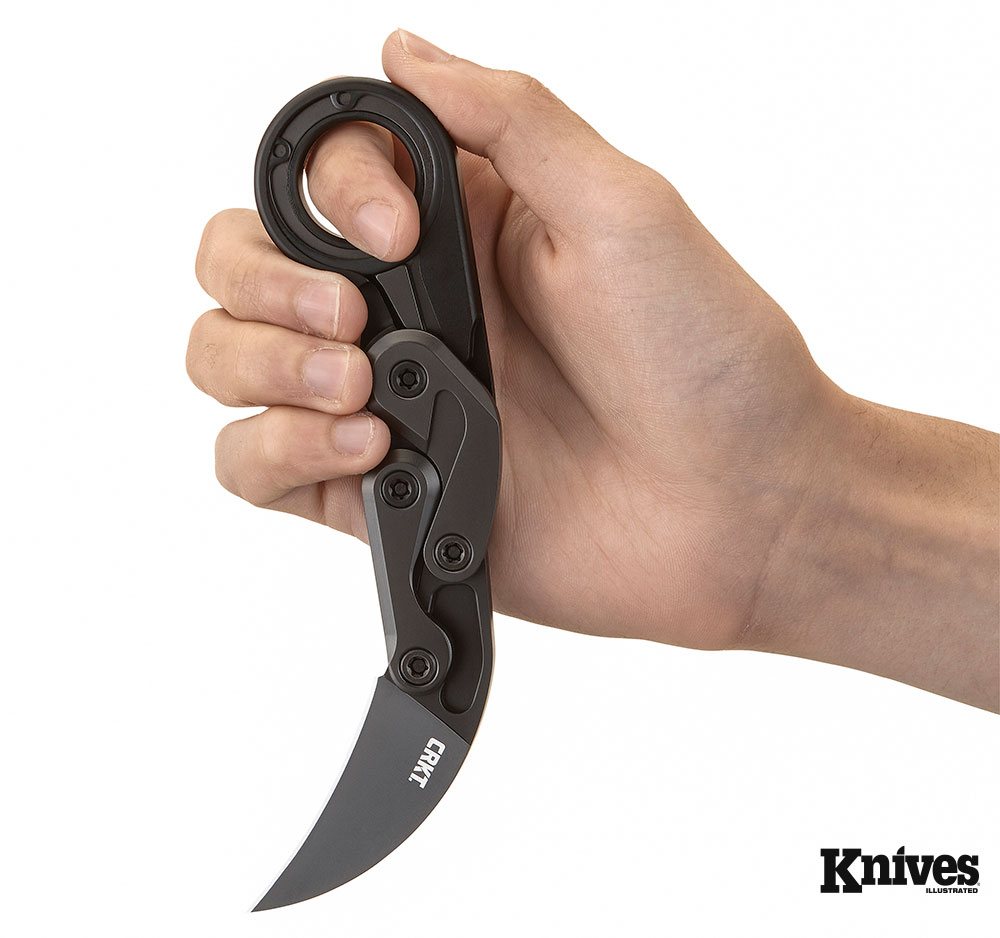 The CRKT Provoke is a fine example of an intricately styled knife. With four bolts and movable parts, the knife locks into place with finesse and well-honed craftsmanship. CRKT photo. 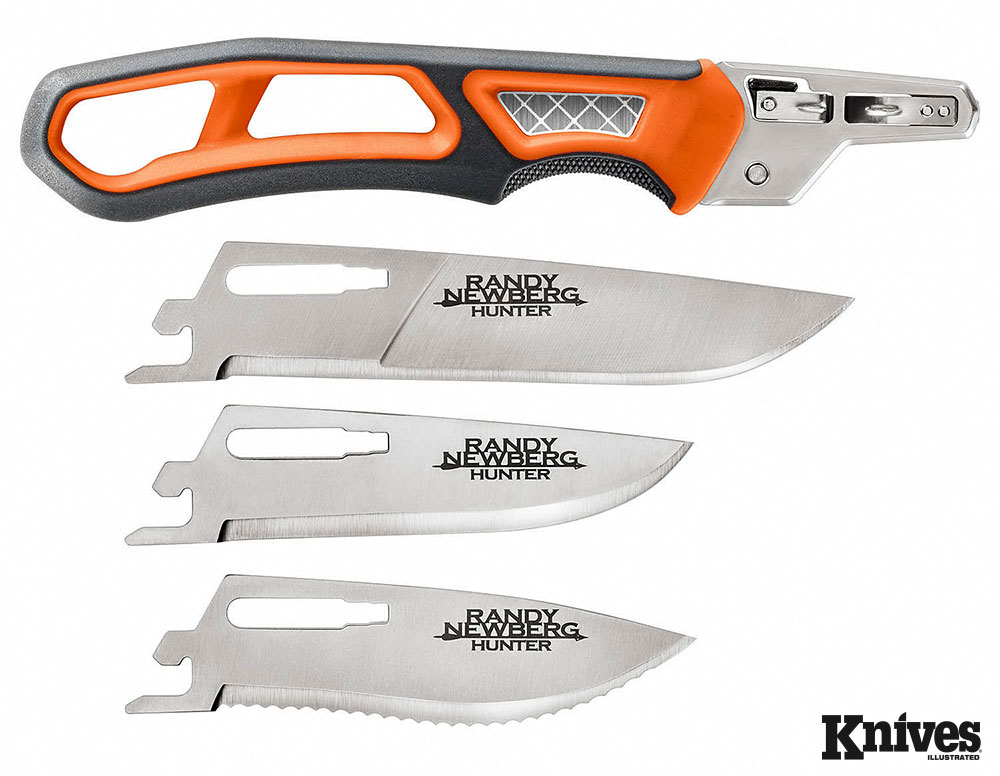 The Randy Newberg EBS Knife from Gerber features exchangeable blades for various hunting breakdown tasks. Here having such an all-in-one saves you from carrying multiple tools to get the job done. Gerber photo. 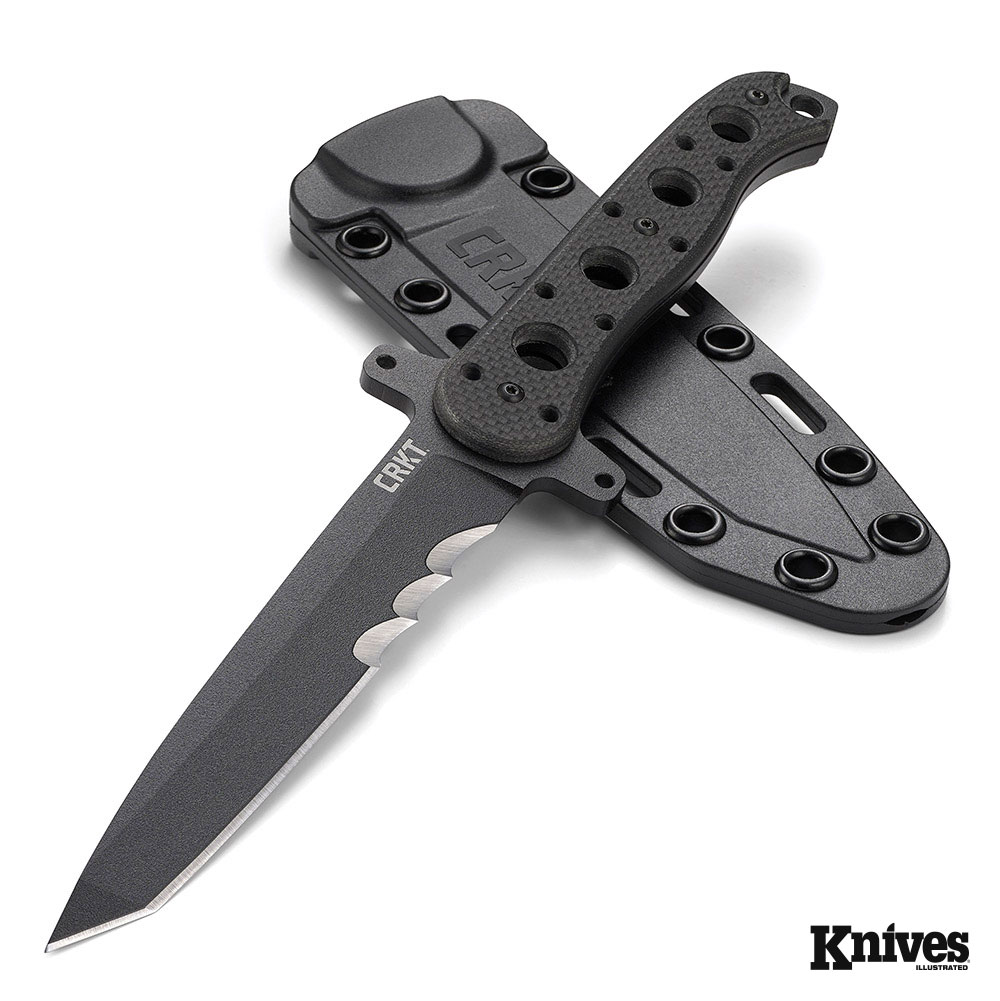 CRKT’s M16–13FX Knife illustrates that a knife can be both simple in form and still offer some extra features such as serrations and a tanto-style, puncture- tipped blade. CRKT photo.

Yes, these are small items, but they do take up space. And when  they’re scattered about, the odds of losing them on your outdoor adventure increases greatly. To solve this dilemma, a sheath with multiple pockets or pouches can aid the single-function knife user and allow them to stay organized by keeping all the smaller gear together in one place.

One factor that needs to be addressed when comparing the two styles of knives is accessibility during everyday use. This is where the simple design may have the edge. Utilizing a simple sheath and possibly a one-snap closure, you’ll be able to access your knife with little effort and replace it equally as well.

A knife doesn’t get much simpler than this model from KA-BAR knives. This knife offers almost zero points of failure. KA-BAR photo.

Furthermore, as time goes on using your knife, it will only get easier as the sheath will eventually conform to the contours of the blade and handle, making it a perfect pairing for the two.

This isn’t to say that a multi-use knife won’t adjust to its sheath after a while; it’s just that with the added parts, it won’t fully integrate as well and it may take one or more extra straps to secure, thus severely slowing down your access to the knife.

Is it a knife or a multitool? The CRKT Septimo is a knife with a built-in adjustable wrench on the tail end, along with other functions. CRKT photo.

Cleanup of a simple design knife is also easier than one with several components attached throughout. Dirt, sticky resin, and all-around gunk found out in the wild can wreak havoc on knives with intricate nooks and crannies. It will take far longer to clean this knife type than one with a simple blade and handle design.

A BLEND OF BOTH

Instead of choosing one or the other, another option for someone undecided could be to choose an amalgamation of both styles of knife. This unit would sport a primary large blade and have one or perhaps two at most extra features.

A simple groove to hold a spindle of a bow drill for fire production or a dedicated surface for striking could be the extent of the additions, but they are important, nonetheless. By having this option, you’ll get the best of both worlds without sacrificing from either camp.

WHAT WORKS FOR YOU

The bottom line is to use what knife type works best for you in your specific situation. Only you can decide this, and it’s accomplished through trial and error using various styles of knives during your outdoor travels. Some may be best in certain circumstances while others fail and vice versa.

The decision can also mirror one’s own particular survival style. A minimalist may gravitate towards the simple blade, while the gear lover will undoubtedly lean towards the multi-use knife. There’s a knife type out there for everyone, and it’s up to you to find your perfect match.

There are pocketknives, there  are multitools, and then there’s the Swiss Champ XXL. If you find yourself needing a quality tool with more functions than either a single or multi-use knife can provide, then this behemoth from Victorinox may be for you. It stands above all others in both sheer bulk and tool variety. It features a mind-staggering 73 functions and puts an entire tool chest in your front pocket. 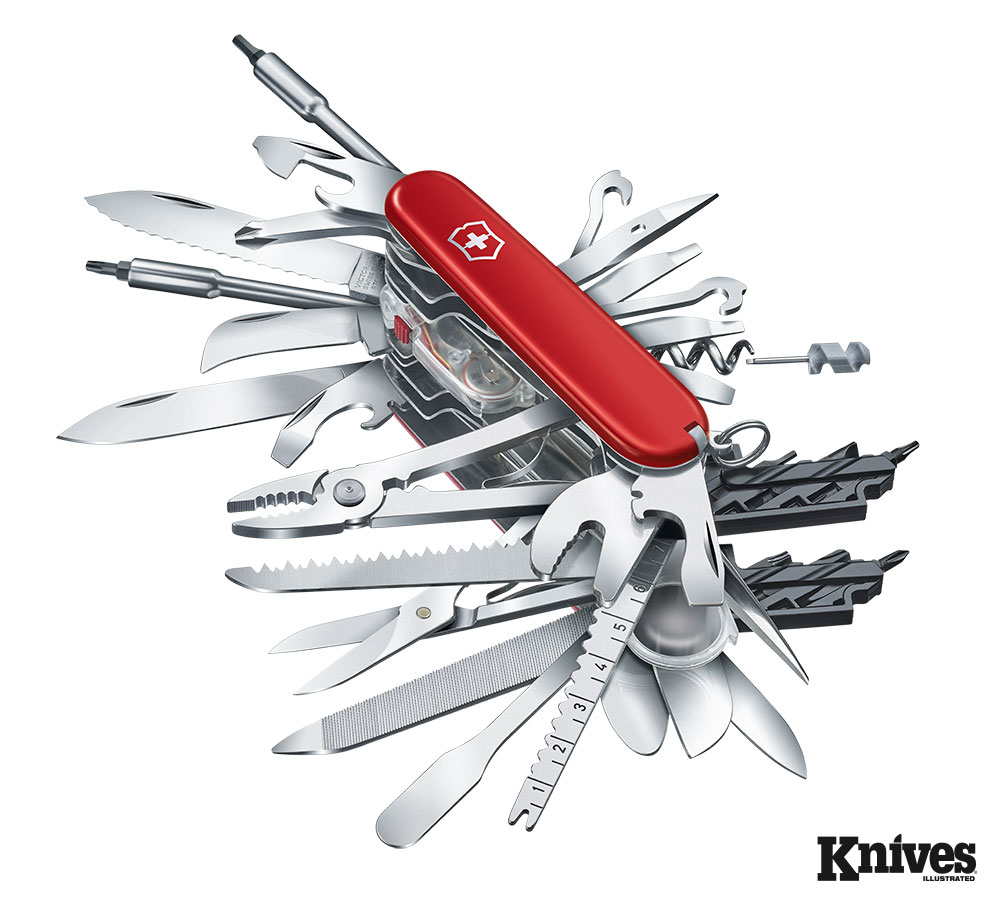 The Victorinox Swiss Champ XXL is bulky, but it provides an amazing 73 functions. Victorinox photo.

From the ordinary, such as a saw and knife blades, to the more obscure like a wire crimping tool and hook disgorger, to the downright odd additions like a pharmaceutical spatula and a multipurpose hook, this pocket pal has it all, and then some.

This monster of a multitool is not all brawn, however, as each unit is meticulously hand assembled by skilled craftspeople who excel at both quality and high performance. The MSRP is $315.99 and they’re available at Victorinox.com.

The Whiskey Knife line is diverse in offerings, but similar in both materials and craftsmanship. This amazing line utilizes upcycled white oak whiskey barrels to create the handles of these knives and tough A36 steel for the blades. You’ll get both high cutting performance and artisan style with all models.

This Whiskey Chopper, like all Whiskey Knife models, is forged in Kentucky, features a full tang and a handle from an upcycled white oak whiskey barrel.

Furthermore, these knives offer some special features that take these blades past the point of just a basic cutting tool, including an integrated finger guard, ferro rod notch, and specialized sheaths that offer multiple carry options. All the knives are hand forged in Kentucky and feature full-tang construction for year after year of reliable performance. Check out all the models at ReptileTool.Works