CHECK OUT THIS TRIO OF NEW SOG FIXED BLADES

OK, confession time. I’ve never owned a SOG knife before now. Being someone who has collected knives for many years, that might be difficult to believe or understand, but it’s the truth. No real reason for it. It wasn’t like I was actively avoiding them.

Now that I’ve spent some time with these three models, I’ll definitely be picking up a few more. SOG has proven to me that the company knows what it’s doing when it comes to knife design and manufacturing. Not that I needed much convincing, given its longstanding reputation in the industry.

These models, the Altair FX, Aegis FX, and Recondo FX, debuted this spring. All are equipped with SOG’s Universal Mounting System (UMS), allowing for a ton of different carry methods, from belt to pack strap and more.

Let’s dive in and take a closer look at each of them.

The first three words that came to mind when I picked up the Altair FX were compact, slim, and useful. I’ll admit that I have an affinity for smaller knives. Big blades are fun, don’t get me wrong, and they definitely have a purpose, but a knife that fits in your pocket is one that you’re not likely to leave at home.

End to end, it is just 7.6 inches, and it weighs less than 3 ounces. The sheath has a handy thumb break, making it easy to slide the knife out no matter how you’re carrying it. If you remove the belt clip part of the universal mounting system, you could even use this as a neck knife, as there’s a handy lanyard attachment point at the tip of the sheath. The overall size is certainly thin enough to carry this way without a problem.

“The first three words that came to mind when I picked up the Altair FX were compact, slim, and useful.”

The clip-point blade profile is very handy for a variety of duties. This one is almost a blend between a clip point and a drop point. There’s jimping on two points of the spine, one up near the tip of the blade and then another that bridges the base of the blade and the upper end of the handle. These are great for providing a bit of extra purchase when you’re dealing with wet conditions. The generous finger groove as well as the texturing on the GRN handle scales ensure you’re not going to lose your grip on the knife. 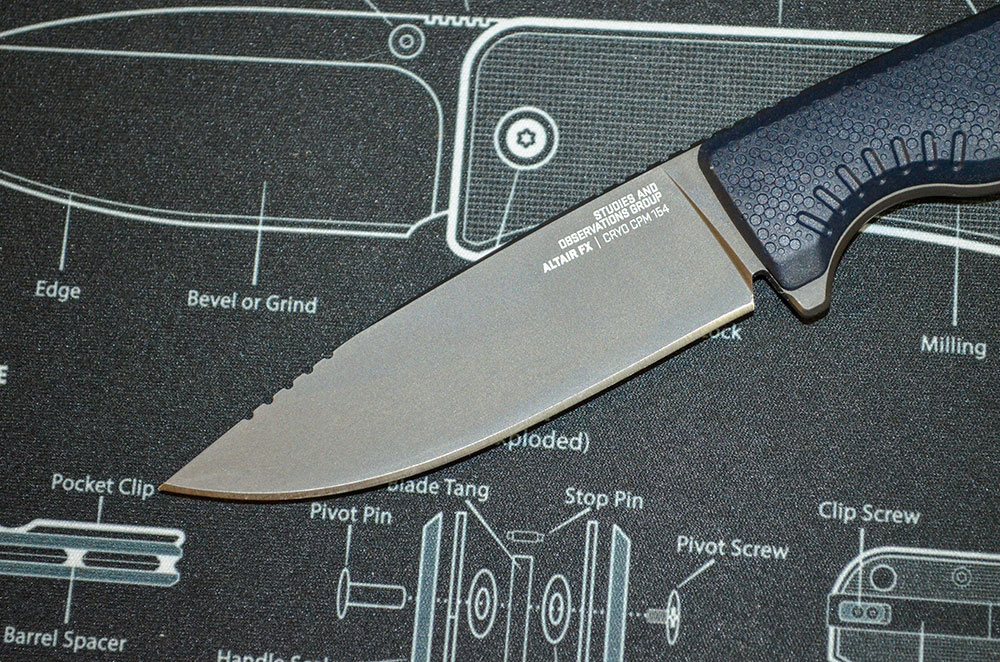 The texturing along the handle of the Altair FX provides great traction without being obnoxious, while the clip point has jimping along the spine for traction when doing detail work.

When I say the knife is slim, I’m talking just 0.375 inch at the thickest point of the handle. Even so, there’s plenty of real estate for the knife to be comfortable to use. I wear L/XL gloves and not once did I feel like the handle was lost in my hand. The Altair FX is available in three colors: Squid Ink, Canyon Red, Field Green.

I have to say, I truly like this knife quite a bit. The size is perfect for a fixed blade EDC. It is slim enough to be a viable option even for those who work in an urban office or another similar, traditionally anti-knife setting. If I were headed out on a multi-day excursion into the field, I’d not hesitate to grab the Altair FX and either put it on my belt or loop it on to a pack strap.

If you were to design a knife that’s perfectly suited for bushcraft and similar wilderness pursuits, it would probably look an awful lot like the Aegis FX. It has an aggressive Scandi grind on the edge, which is excellent for wood carving and such. The drop-point blade is 0.0625 inch thick, making it strong enough for real work in the field without turning it into a boat anchor on your hip. 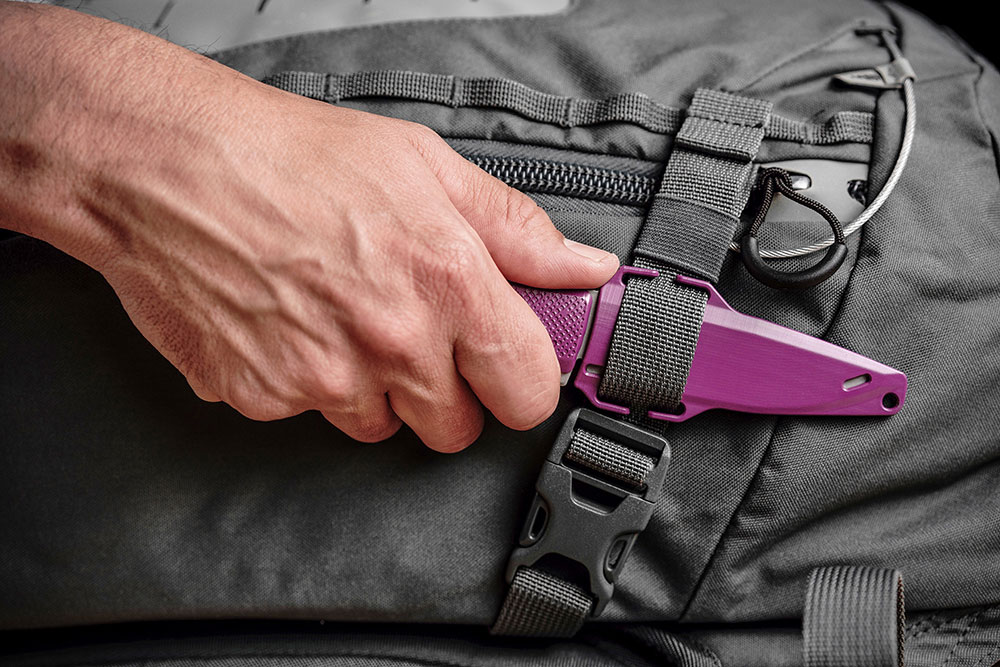 You can keep the Altair FX on your bag or pack until you need it. The sheath is designed such that you can attach it using pack straps without having to remove the straps and feed them through the sheath. SOG photo. 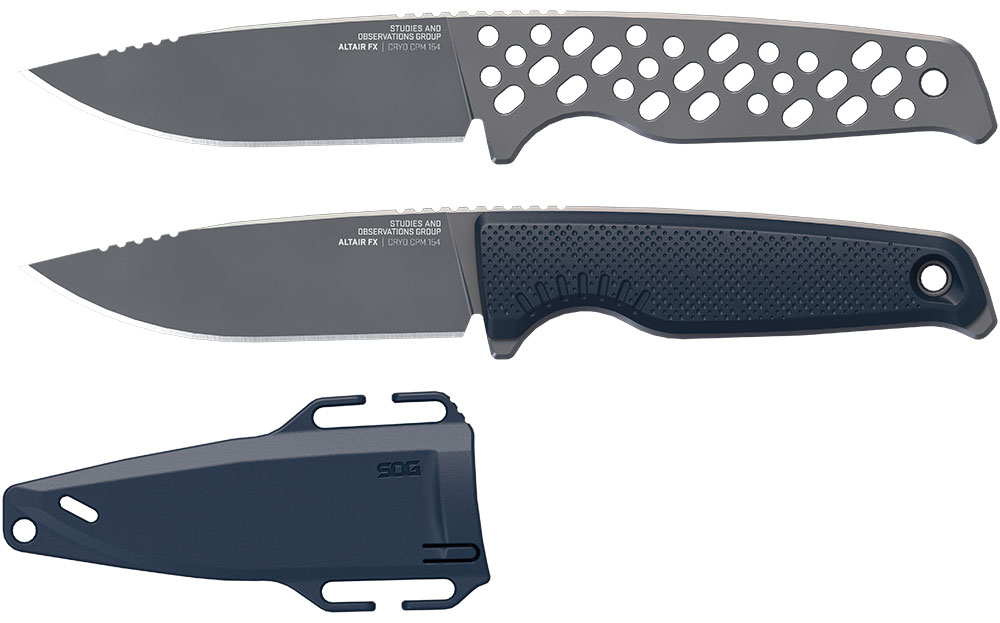 The skeletonized tang on the Altair FX cuts down the weight of the knife without compromising strength. SOG photo.

From tip to butt, the knife has a gentle curve along the back, which provides a bit of added leverage. The handle is GRN with rubberized molding along the bottom edge, giving both traction and comfort when in use. As with the Altair FX, there’s jimping near the tip of the blade as well as where the blade meets the handle. 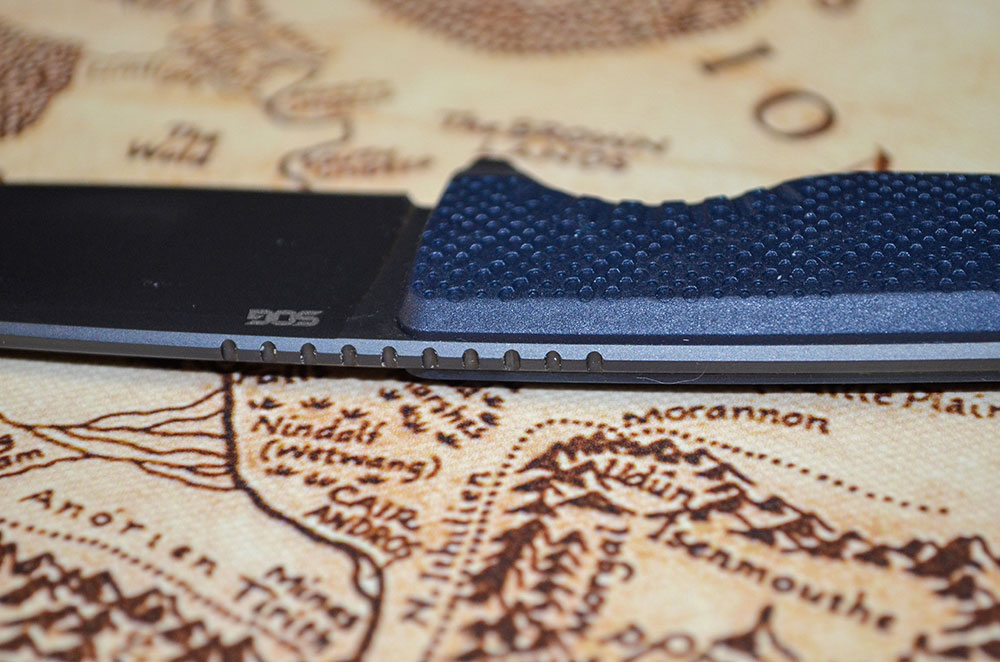 The jimping along the spine of the Altair FX gives you plenty of purchase, no matter what you’re doing. The blade runs just shy of 4 inches, giving you plenty of sharp edge to meet your basic needs in the wild. At 4.7 ounces, it has just enough heft to let you know it’s there without weighing you down. There are four color options with the Aegis FX: Indigo and Acid Yellow, Forest and Moss Green, Rescue Red and Indigo, and Black and Moss Green. 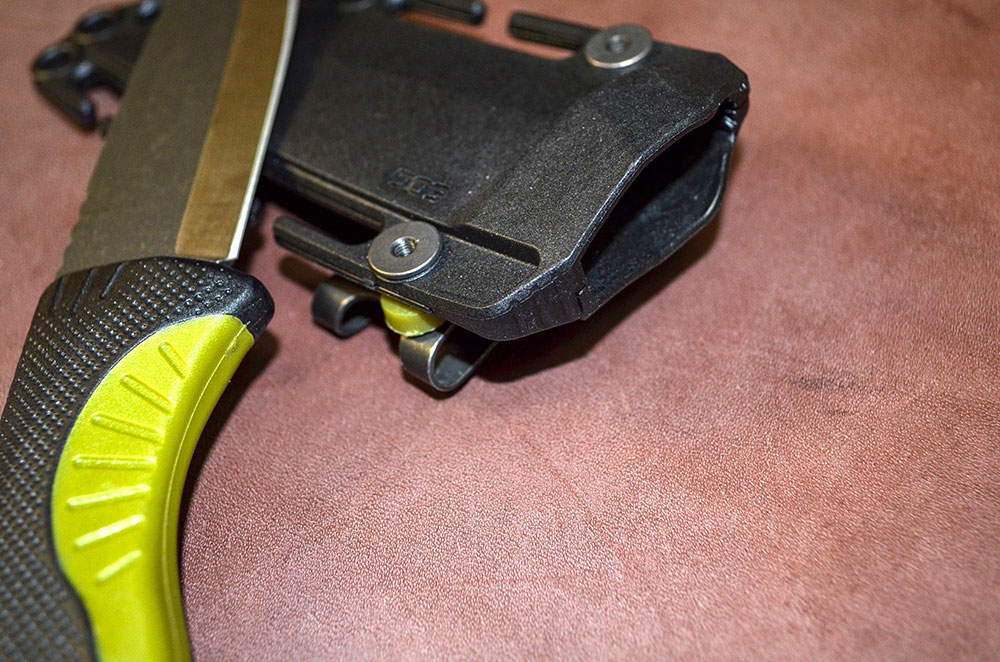 Here, you can see the thumb break on the Aegis FX sheath, as well as the bit of texturing on the handle.

For those seeking a true bushcrafter’s knife, something that will work well for carving tools, building shelters, and related wilderness chores, the Aegis FX will do the trick nicely. It is a solid, dependable knife that will hold up to years of use and abuse in the field. All other things being equal, I’d lean toward one of the brighter color options, just so the knife is easy to spot when you set it down.

The Recondo FX is the tactical model of this trio. That’s evident from the moment you pick it up and pull it from the sheath. The clip point blade is 4.6 inches long and is available in either straight or partially serrated options. There is a swedge as well, creating a needle point. While all three SOG knives arrived sharp, the Recondo FX had the keenest edge by far right out of the package.

“While all three SOG knives arrived sharp, the Recondo FX had the keenest edge by far right out of the package.” 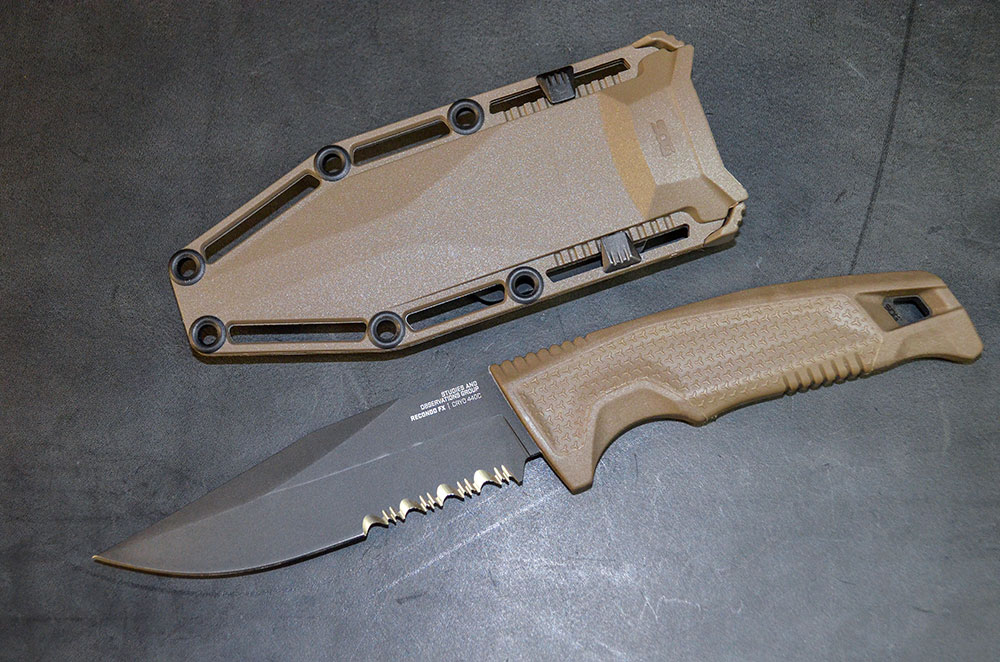 The Recondo FX has an aggressive appearance, no question. The texturing on the Recondo’s handle comes in a few different forms, but all work together to give you a solid grip even in challenging conditions. 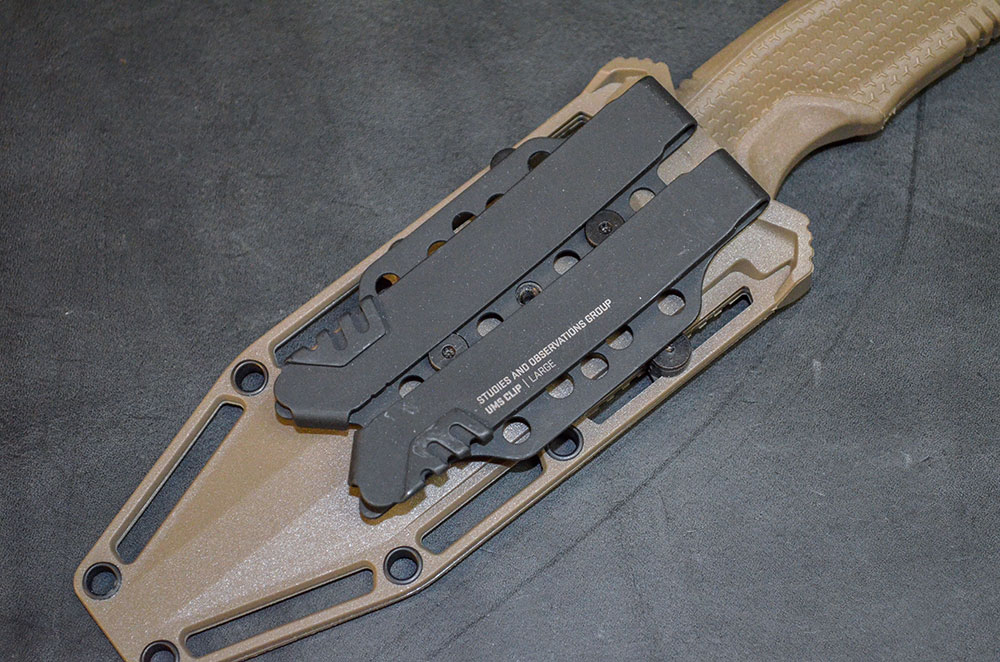 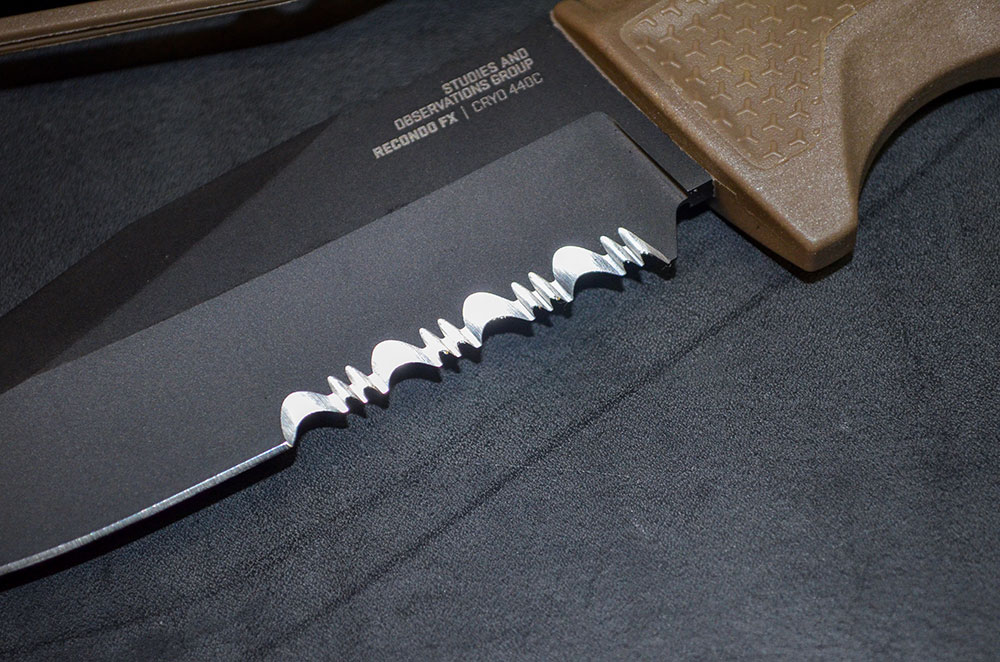 The serrations on the Recondo FX are exceptionally sharp and ready to make short work of anything you put in front of them. The Recondo FX comes in either straight or partially serrated models. SOG photo.

The handle is glass-reinforced nylon (GRN), with an over-molded rubberized grip. GRN is a tremendously wear-resistant material. The shape of the handle coupled with extensive texturing on the sides provides an eminently secure grip, no matter what you’re doing. There is a lanyard hole at the butt end, though there’s little need for one other than solely for decoration. 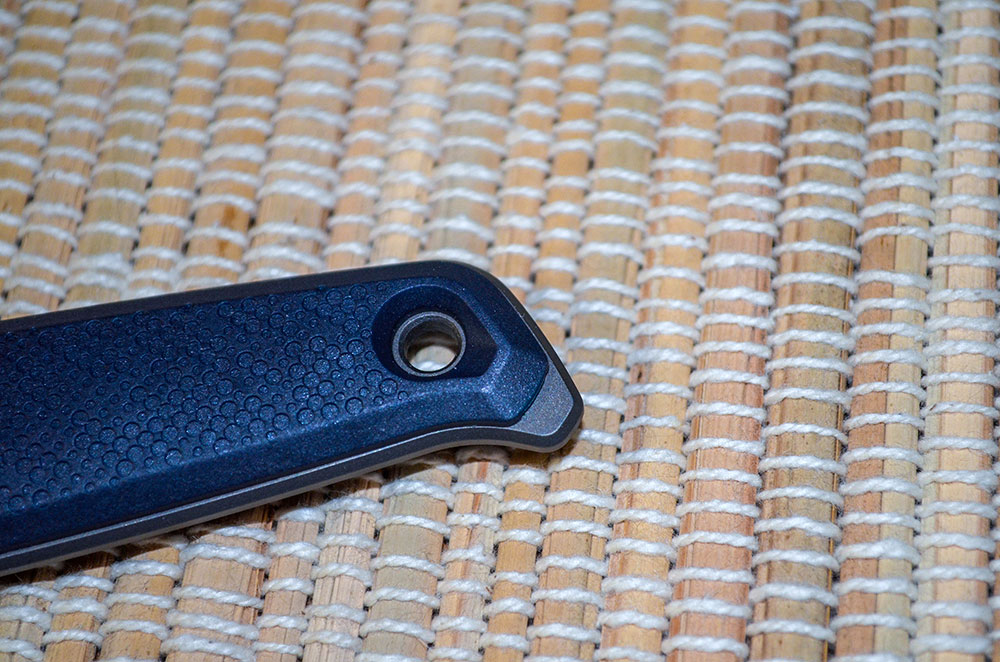 A lanyard hole is a great addition to the Altair FX. Carving off pieces of thick rubber hose posed no problem for the Altair FX.

SOG went with Cryo 440C stainless steel for the Recondo FX. The knife is exceptionally wear- and corrosion-resistant as a result, making it a great option for those who operate in damp environments. It is a hard steel without being overly brittle. While this hardness provides excellent edge retention, it can be a little tricky to sharpen if you let it get dull. Slicing up a piece of upholstery strapping from an old couch was easy with the Aegis FX.

The plastic sheath is sturdy and is equipped with a thumb break to allow for easier deployment of the knife. There are several attachment points, allowing the user to strap the knife to a pack or other location quite easily. Owing to the UMS, it can also be put on a belt or configured in a number of other ways. 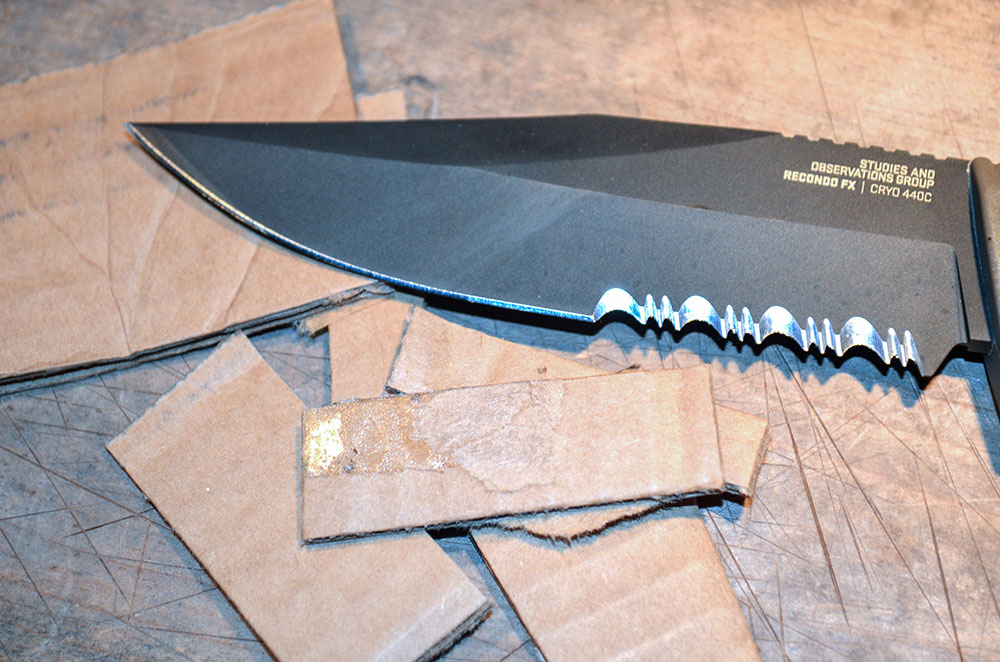 The keen edge of the Recondo FX made short work of a cardboard box.

This knife is suited for fieldwork, pure and simple. This isn’t something that you’d carry for daily use in an urban or suburban setting, most likely. That said, it is a great option for those looking for a do-it-all sort of knife. It’ll handle just about anything you’d care to throw at it. The tactical appearance might be problematic in some settings, but it is an eminently capable knife.

It is safe to say that with the new FX models from SOG, they have something for everyone.

A version of this article first appeared in the May/June 2022 print issue of Knives Illustrated.