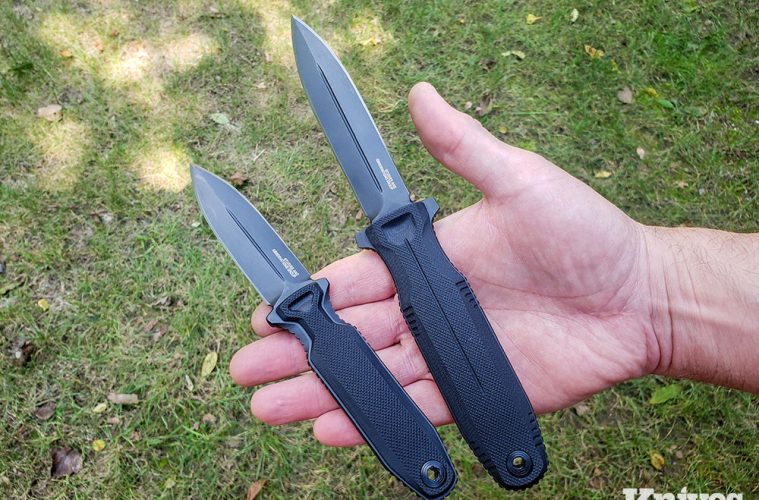 As a kid, I had a couple Japanese Parker boot knives, and later as a private in the U.S. Army, I picked up an actual Gerber MK I at the PX. I have no idea what happened to my Parkers, probably given away or traded off. And like a dumb kid, I broke the tip off my Gerber by using it as a throwing knife.

“Either Pentagon will make for a great defensive blade…” 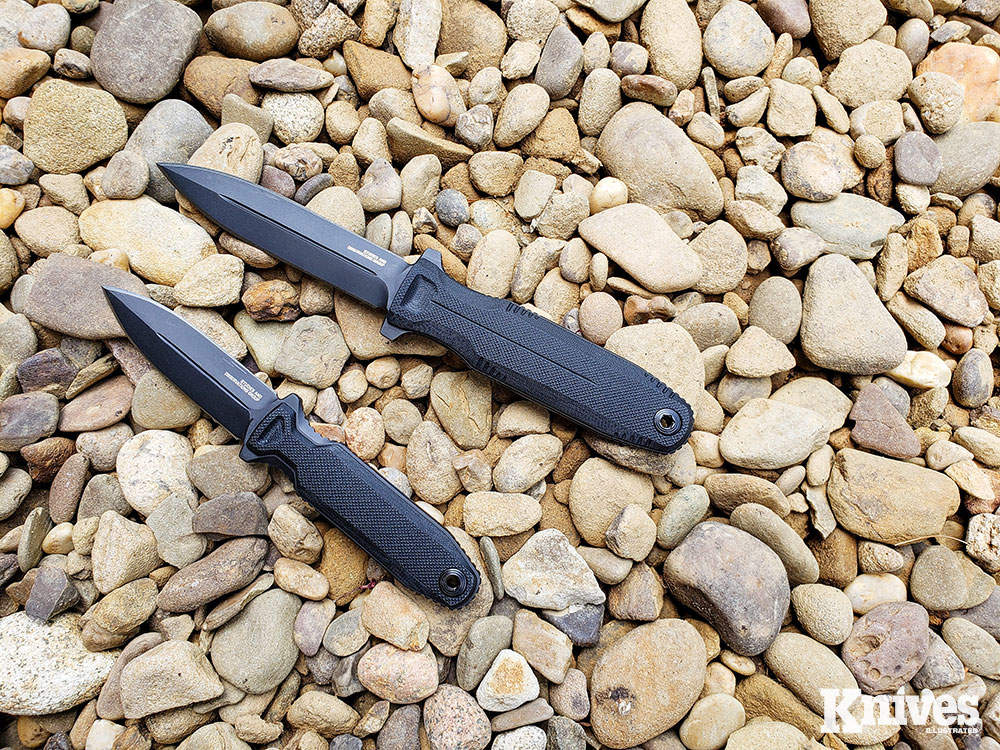 The SOG Pentagon FX and FX Covert are well thought out and executed updates to the popular fixed-blade Pentagon line.

That mostly ended my fascination with boot knives and daggers for a few decades. For whatever reason though, I’ve been getting interested in them again. Not that I’m doing many covert ops or getting into knife fights at 50 years old, living in a quiet suburban neighborhood. But still, the itch is there to revisit that style knife.

I was looking around and really wasn’t finding anything that sang to me, when I got an e-mail asking if I wanted to check out the latest version of the SOG Pentagon fixed blades. A quick look at SOG’s website and I knew I was in. These might be just the models that will end my boot knife hunt.

The SOG Pentagon series consists of the Pentagon FX and the smaller Pentagon FX Covert. These are updates from SOG’s previous lines of Pentagon daggers and are built around a 0.180-inch-thick, full tang, skeletonized handle with an integral double guard.

“I know for me the FX Covert is going to fill that gap in my collection for a new boot knife.” 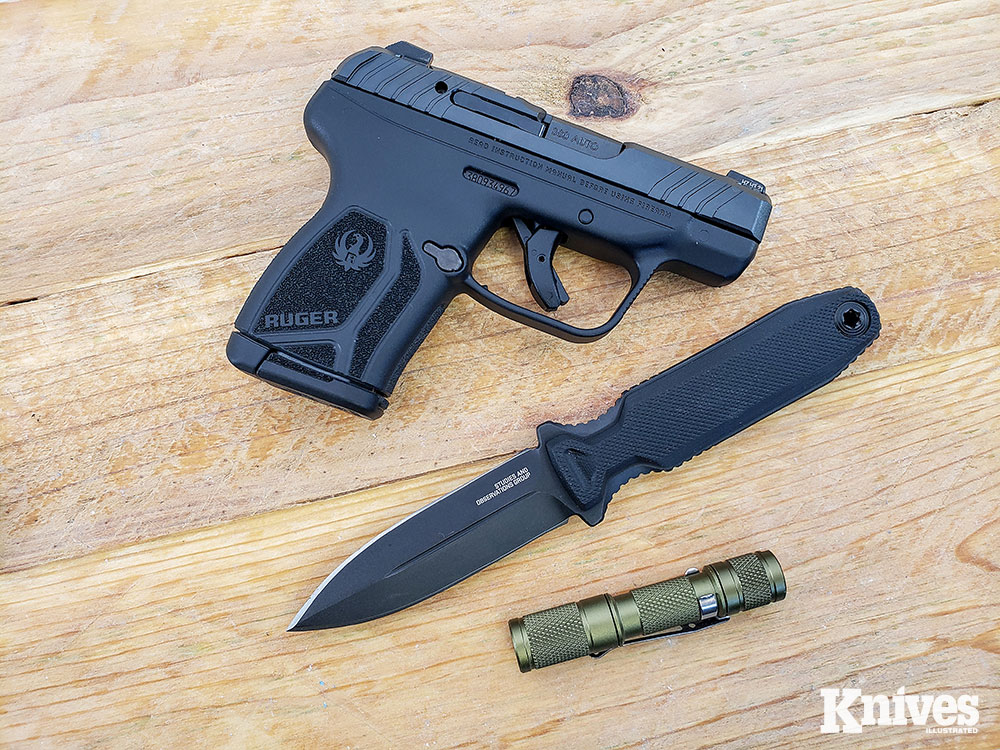 The FX Covert makes a nice backup blade to a low profile carry setup such as the Ruger LCP Max.

The FXs are made from CRYO CPM S35VN stainless steel treated to a 58-61 HRC and coated with a black titanium nitride finish. Blades are double edged with a narrow lightening fuller in each side. They have removable G10 handle scales available in black or Flat Dark Earth.

Where the XR and the XR Covert differ is in size. The FX has a 4.77-inch blade and is 9.93 inches overall. The Covert has a 3.41-inch blade and is 7.52 inches long. The FX clocks in at 6.5 ounces, and the Covert shaves off a few ounces, coming in at 3.9 ounces. The FX’s handle is about an inch longer than the Covert’s and a little wider and thicker. The author could just get a four-fingered grip on the FX Covert and still comfortably wrap his thumb over the pommel of the knife. 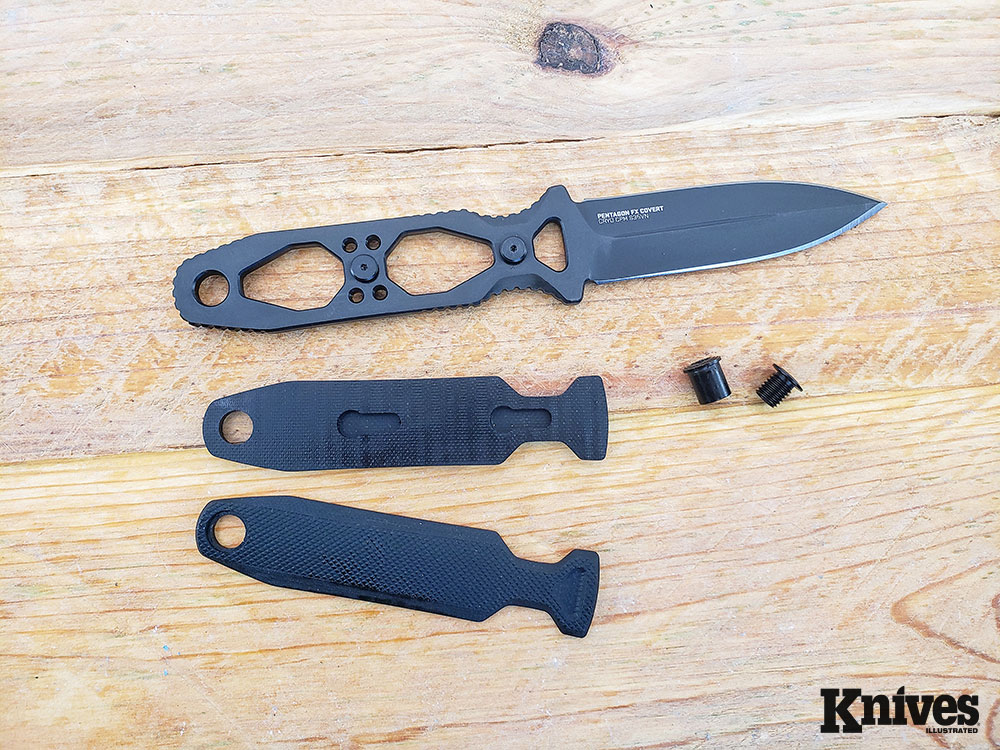 If you want an even lower profile package, you can take the scales off of the Pentagon FX Covert and either use it as-is or cord wrap it.

So, when it comes to testing daggers, a lot of my regular EDC and bushcraft tasks go out the window. With that said, the Pentagons do have blades of CPM S35VN steel and come with working edges. They’re not razor sharp, but they’re sufficient for most chores out of the box. They should touch up even more on a good stone. 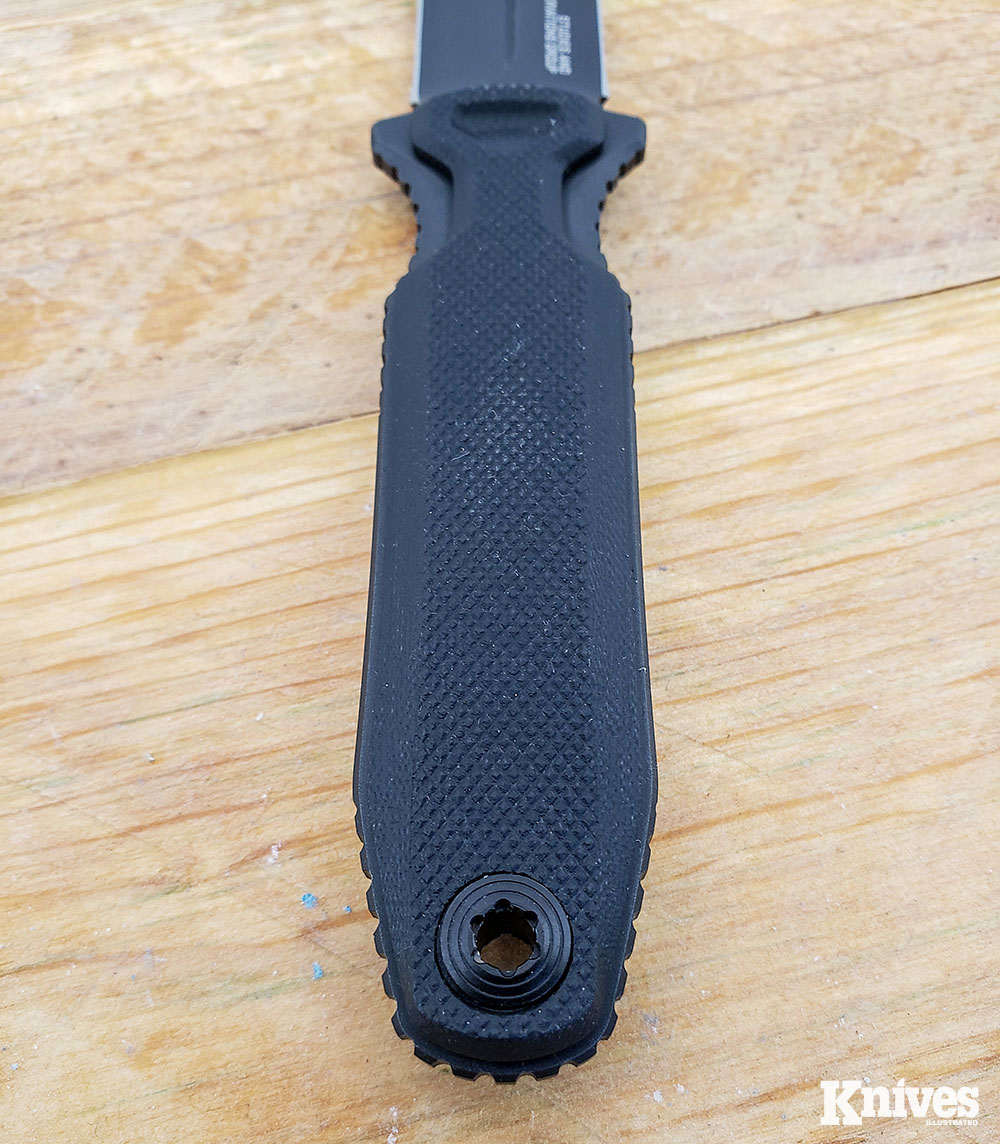 A lanyard hole adorns the butt of the Pentagon, and it also contains the takedown screw for removing the scales.

You certainly can use it for mundane tasks, such as opening boxes, cutting banding straps on MRE cases, and slicing open packages. And I’m sure they will get used that way if they’re the knife folks have on them, especially in the field. That really isn’t their purpose though. The Pentagon FX and FX Covert are primarily defensive tools. 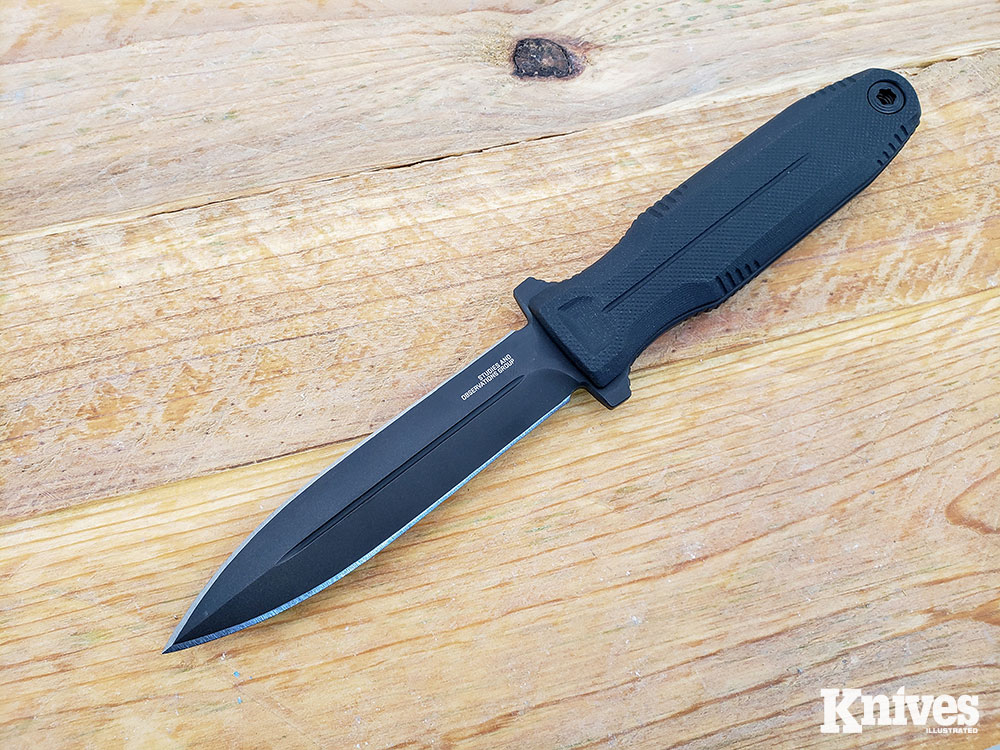 The larger Pentagon FX is 9.93 inches overall and weighs 6.5 ounces.

The larger Pentagon FX will most likely find its home attached to a gun belt or a plate carrier, and it’s a good choice for that role. It’s compact enough not to be cumbersome, but big enough to be an effective backup weapon. Its 4.77-inch double-edge blade has a very fine tip, and it glides through test materials such as leather, denim, and heavy Cordura nylon with ease.

It works well in either an ice pick or sabre grip, and the integral guard is a welcome addition over previous generations of Pentagon fixed blades. It really helps to keep your hand from sliding up on the blade during a hard strike.

The textured G10 handle and thumb scallops, as well as the jimping on full tang, also assist in this greatly. 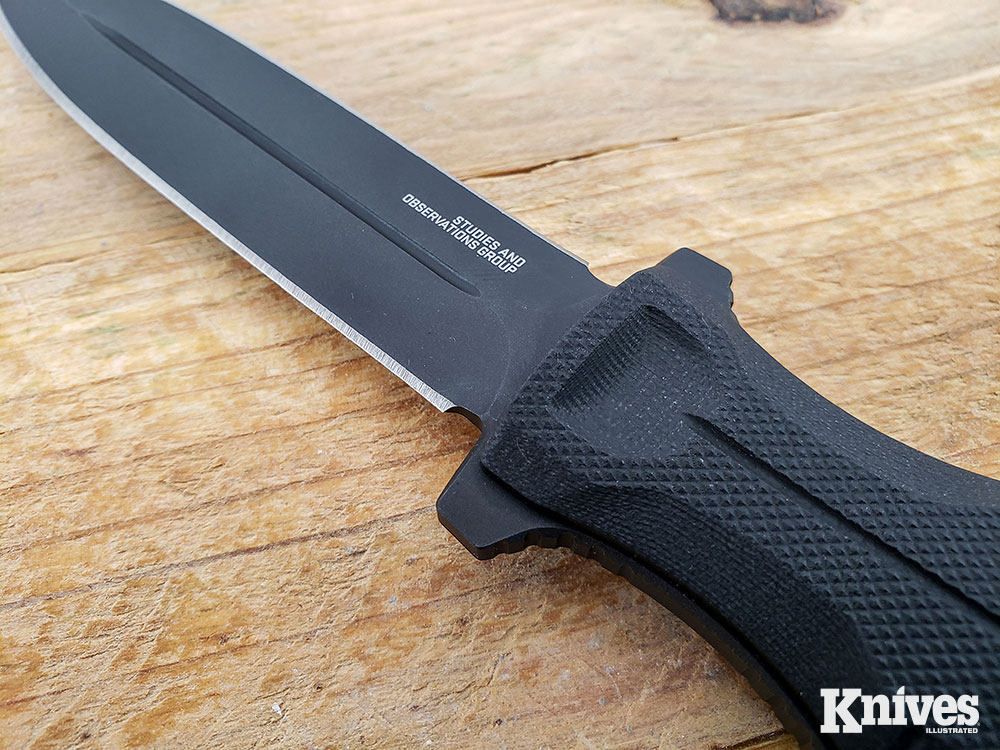 A thumb scallop is present on each side of the Pentagon’s scales, which is helpful when thrusting with the knife with the blade parallel to the ground.

When I have the FX grasped in a hammer grip I have at least five-eighths inch of the pommel exposed that could be used for strikes as well. The jimping on the pommel provides a nice solid spot to rest your thumb when in an ice pick grip, but it also makes a good DNA collector if you use it for strikes, especially on someone’s noggin.

The keen tip worked well for opening up deep gashes in my cardboard test targets when slashing, and the knife was especially quick when slashing and then immediately returning with a back slash. 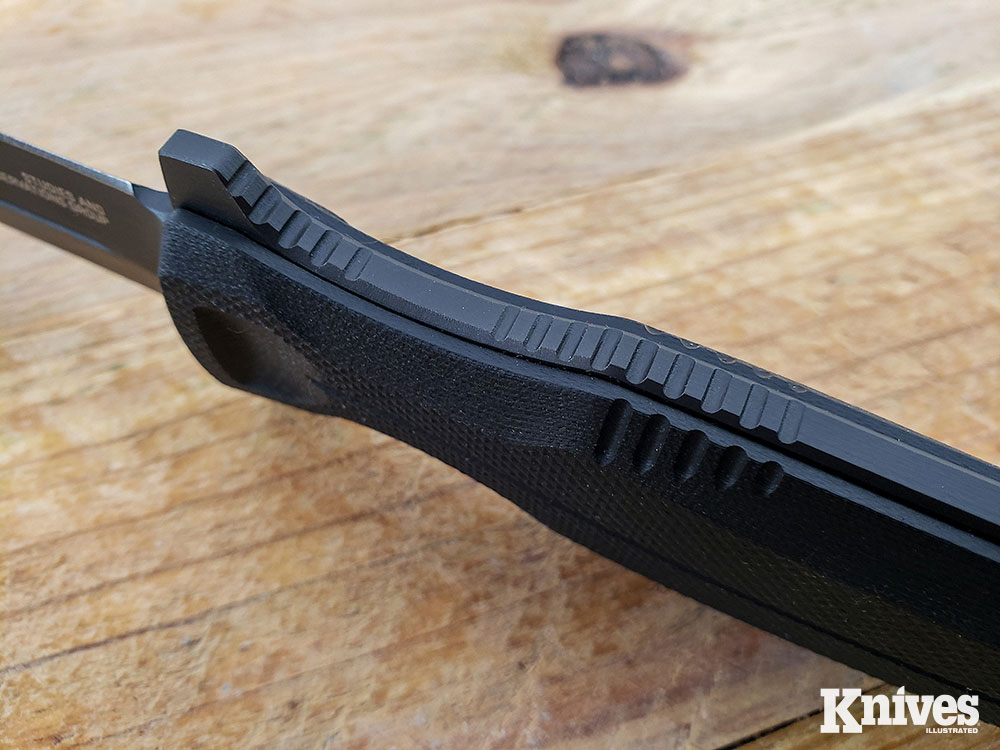 The full tang of the Pentagon FX has jimping to help ensure a firm grip even in wet or slippery conditions.

The FX Covert is more of an EDC defense blade. Its 3.41-inch blade, slightly thinner profile, and more streamlined sheath would work quite well for discreet carry. I can just barely get all four fingers on the handle of the Covert, but they do fit and it’s comfortable to use.

It shares the fine tip of its larger brother and again did well on my test materials. But it obviously can’t penetrate as deeply with the shorter blade. I think the larger handle on the FX also helps give a little more power for strikes than the Covert.

“The larger Pentagon FX … (IS) … compact enough not to be cumbersome, but big enough to be an effective backup weapon.” 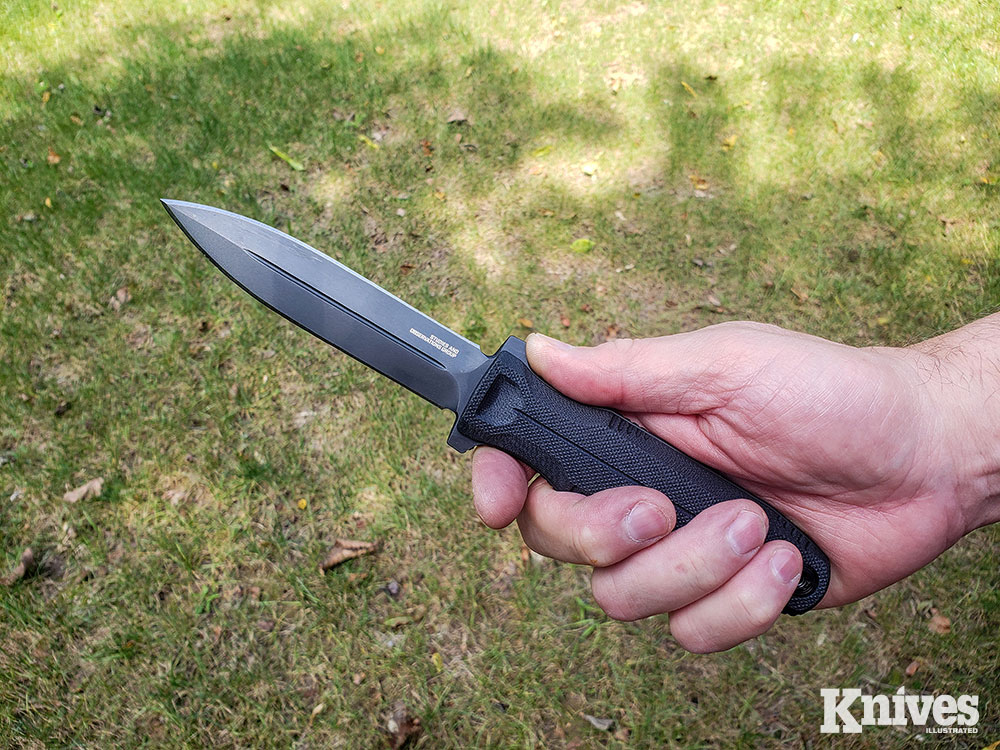 The Pentagon FX works well in a classic sabre grip.

Don’t take that as a knock on the Covert, though. It does a great job for its size and will have an edge (no pun intended) over a folder with a similar size blade both in strength and speed of deployment.

One of my mentors always said that a folder is a pre-broken knife. There should be no failure concerns with the Covert with its tough CPM S35VN steel and full tang construction. 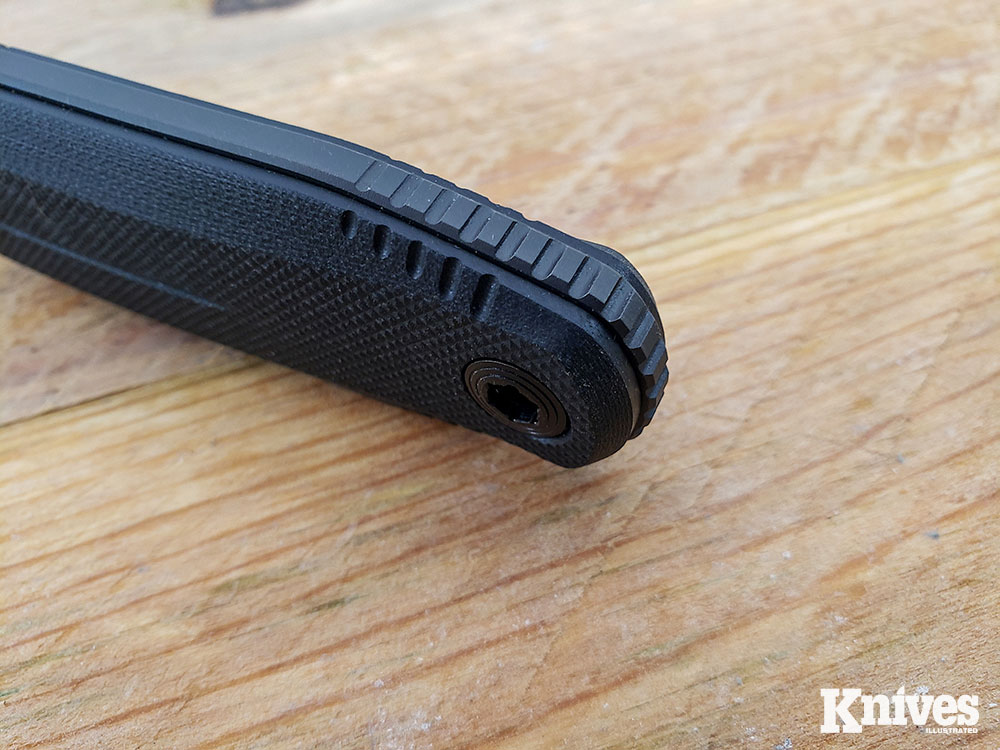 The pommel of the Pentagon FX also has jimping that works well when the knife is used in an icepick grip.

If you want a thinner profile on either knife, you can remove the handle scales and either use it as a bare, skeletonized handle or you could cord wrap it. I went to remove the scales and soon found it wasn’t as intuitive or straightforward as I thought. With a T30 Torx driver, I got the lanyard fastener out with no issue.

From there I was stumped and eventually turned to the internet. Luckily SOG has a really good video on removing and reinstalling the scales. They recommend two T30 drivers, two T6 drivers, a punch, and a hammer.

Using a pair of Torx drivers, one on either side of the fastener, is probably more efficient, but I was able to loosen mine up using one driver with no issues. The punch and hammer are then used to knock the scales loose. 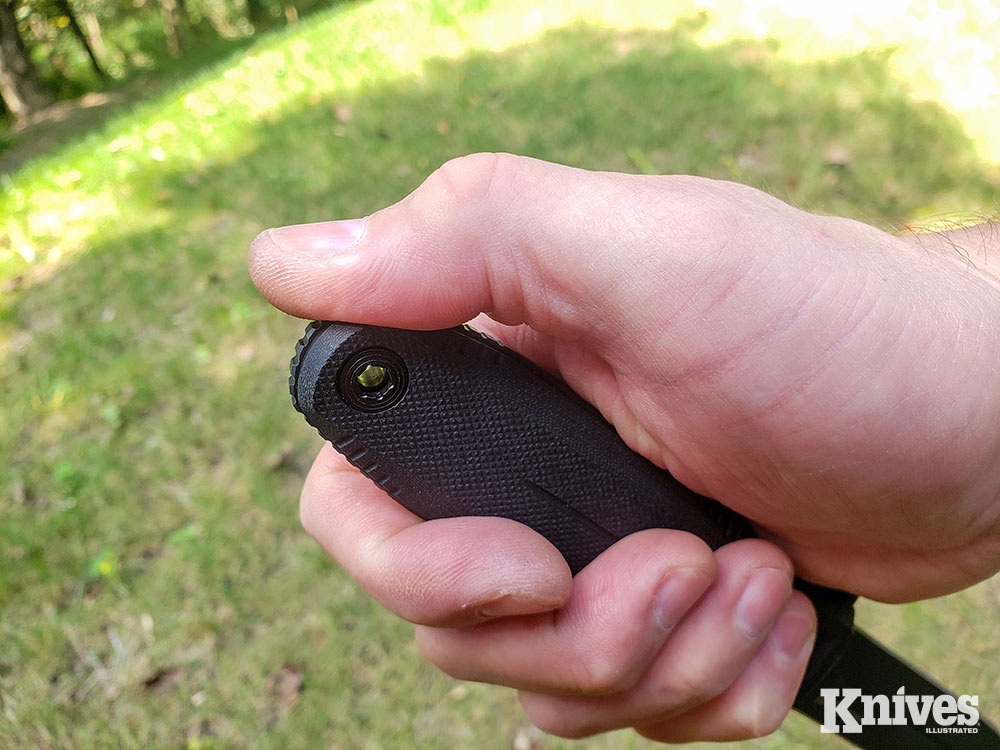 The jimping on the pommel of the knife helped lock the user’s thumb in place with an ice pick grip.

After the scales are detached, use the T6 drivers to remove the internal fasteners that the handle scales lock onto. The smallest driver size I had was a T8, so I couldn’t actually remove those at the time. Still, I was able to get a look at, and feel for how the Pentagons would perform without the scales. The size difference between the FX Covert (left) and the Pentagon FX (right) can easily be seen with them side by side in the author’s hand.

Personally, I don’t think the scales add enough thickness to warrant taking them off, especially on the Covert model, but it’s nice that you have the option to do so. It might be nice to see scales offered in other colors or materials down the line as well. SOG has equipped the new Pentagons with a double-edged blade with a keen point and a subdued black finish.

The new Pentagon FX series is a nice evolution of SOG’s Pentagon design. These knives are extremely rugged, very ergonomic, and you can tell that everything is very well thought out, from the fine details on the handle scales and the jimping on the frame, to the whole Universal Mounting System with the rugged GRN sheaths.

SOG uses a Universal Mounting System (UMS) on the Pentagon series, which allows the user to set the sheaths up in nearly any conceivable configuration for carry.

Either Pentagon will make for a great defensive blade, either strapped to your plate carrier if you’re in the military or security field, or tucked into your waistband for everyday carry.

Check your local laws because double-edged blades seem to trigger politicians in some jurisdictions. If you’re able to carry them, then the Pentagon FX series knives are well worth checking out. I know for me the FX Covert is going to fill that gap in my collection for a new boot knife. The Pentagon FX comes with a GRN sheath with a secondary retention strap installed. The Pentagon FX also comes with a drop leg attachment in the box, as well as the large UMS clip that’s already installed.

A PURPOSEFUL AND PRACTICAL SHEATH SYSTEM

Sheaths are often an afterthought for companies, and that’s long been a sore point for me. If a knife has a poorly constructed or designed sheath, it isn’t going to get carried, which means it isn’t going to get used. While there’s a thriving market in aftermarket sheaths, that’s added time and expense for users who really just want to make their purchase and get to work.

SOG has taken all of that into consideration and come up with an extremely functional and practical sheath system so that you’re good to go out of the box. The Pentagon FX and FX Covert come with GRN sheaths that are compatible with SOG’s next-generation Universal Mounting System (UMS).

The UMS is as much a part of the story as the knives themselves. This setup allows for a variety of attachments, ensuring that you can carry in almost any conceivable way.

The Pentagon FX comes with a secondary retention strap installed, as well as a large UMS clip that can clip to MOLLE gear, belts, straps, or what have you. Also included in the box is a drop leg adapter that includes a retention strap.

The Covert comes with the UMS belt clip attached (which will also work as a boot knife if anyone actually carries that way anymore). You can mix and match those different attachments though, as well as an optional small UMS clip, to get the set up that works best for you.

The sheath on the Covert is low profile and minimalist, whereas the sheath on the larger FX has additional slots and holes for lashing or attaching other items to the sheath. It also has a set of sliders on either side of the sheath that can be adjusted for customized tension modifications that allow the user to set how much resistance the sheath affords during the draw.

The sheath comes set up at the halfway point, which seemed to provide a good balance between retention and reasonable draw to me, but you can make it easier or harder to draw depending on your use parameters and needs.