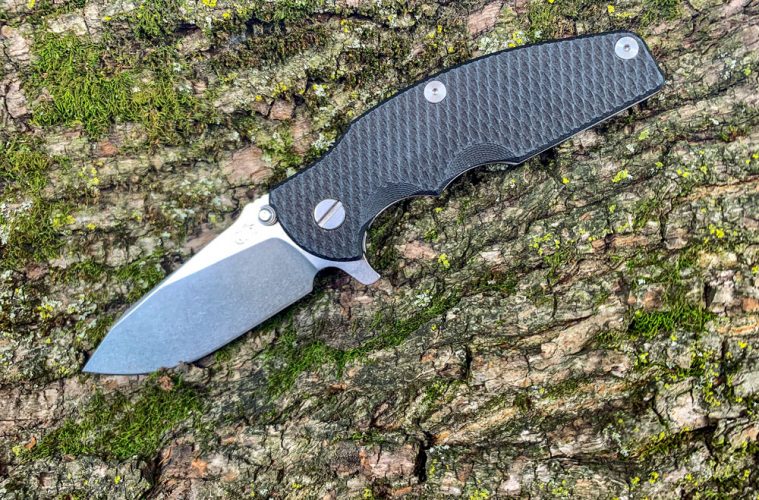 Hinderer Knives: “Better than the Icon?”

He also moved from more traditional knifemaking methods to modern CNC techniques. It didn’t take long for his designs to take hold in the knife world. Today, Hinderer is known for producing tough, well-thought-out and attractive designs that have built a rabid fanbase all around the globe.

The icon among icons of the Hinderer lineup has long been the XM family. If the XM-18 was a car, it would be a ’57 Chevy. If it was an actor, it would be Clint Eastwood. You get the point… The XM Series comes in three sizes: the 3-inch and 3.5-inch XM-18, and the larger 4-inch blade XM-24. They are truly outstanding knives and one that every folding knife enthusiast should at least try someday.

“I think I may have found  (a Hinderer) that could be just a bit better for the majority of users out there.”

However, there are several other models in the ever-expanding Hinderer lineup. I’m a huge fan of the XM-18 and 24, and I hate to sound like a heretic, but I think I may have found one that could be just a bit better for the majority of users out there. Read on before you burn me in effigy…

The model I’m talking about is the Jurassic. Specifically, the new Gen 2 model. 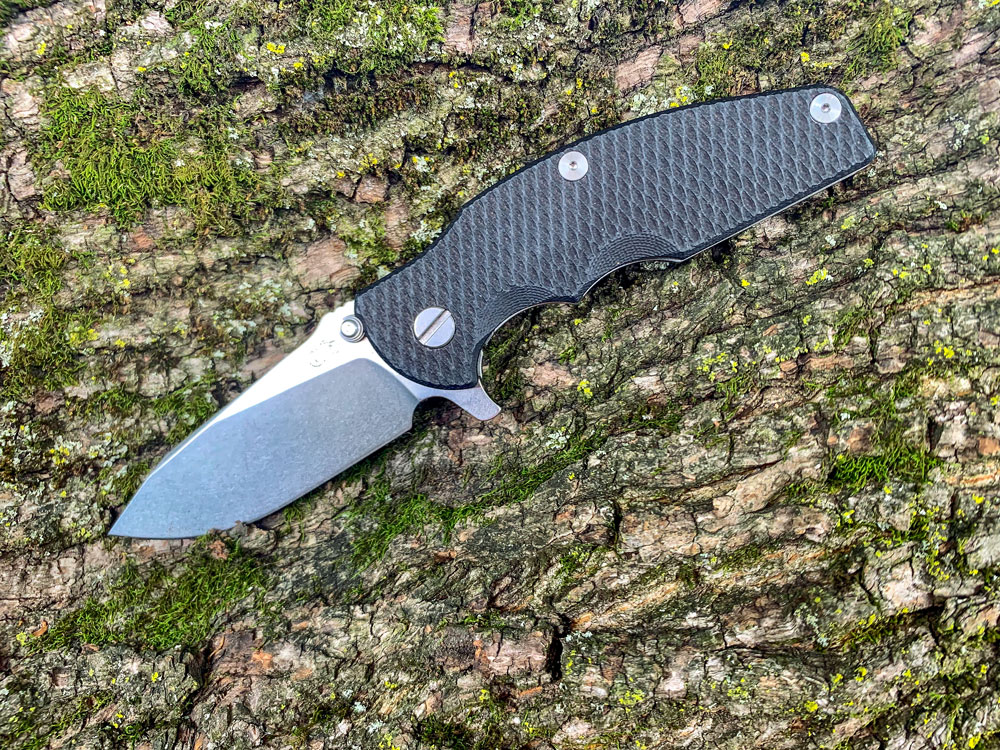 The look of the Jurassic is very much Hinderer with its familiar finish and frame lock design, but it does differ significantly from the other models.

The first generation of the Jurassic that was released a few years ago wasn’t exactly a hit. It had a very weird reptilian scale pattern that was very much a love-it-or-hate-it sort of thing. It was released at the height of a period when Hinderer’s pivots were still running solely on Teflon washers and the detents were more than a bit inconsistent.

However, the overall design and ergonomics were excellent, and some people loved them despite their flaws. Luckily, Rick was one of those people and he decided to take another crack at it this year with a much-updated version.

“The overall ergonomic design of the Jurassic is just sublimefor my hands.”

The Gen 2 comes with a much more familiar Hinderer pattern G10 scale, and all the knowledge that the company has gained over the years when it comes to making a nearly perfect detent and the much-vaulted Tri-Way pivot system. The combined effect of these changes is remarkable. This is a truly impressive knife. 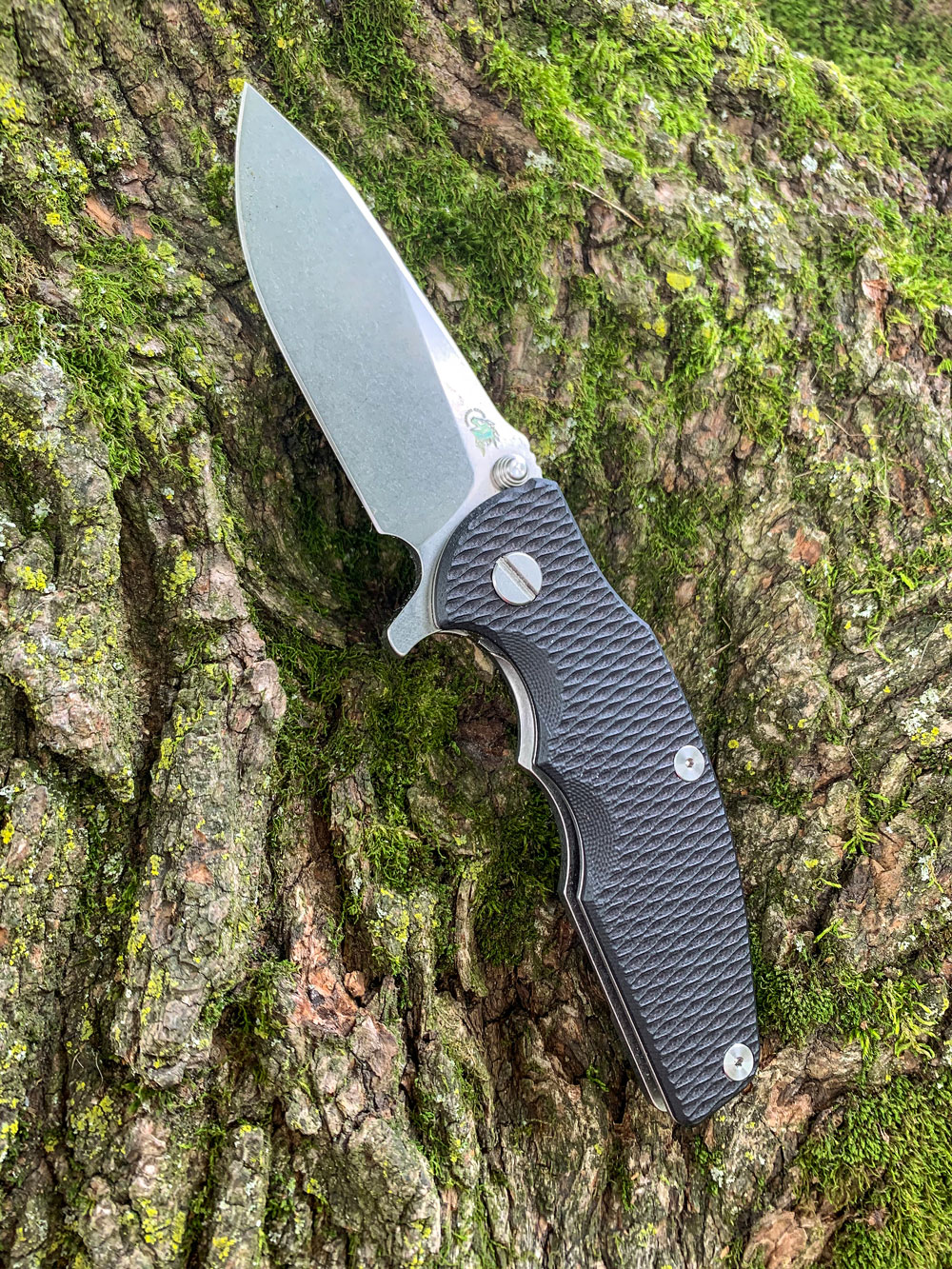 The Jurassic is designed more for EDC than some other models, but it’s still just as capable as any other Hinderer.

The look of the Jurassic is very much Hinderer with its familiar finish and frame lock design, but it does differ significantly from the other models. It has a more flowing design that looks more focused on ergonomics than some other Hinderer models.

It also has a small HMBS backspacer in addition to the usual standoffs. This easily removable backspacer will eventually be available with options such as a glass breaker. There is no forward finger choil like there is on many XM models.

Some of the hardware is different as well. Rather than the Allen keys that most Hinderers use for the stand-offs, the Jurassic has Torx, although the usual Hinderer pivot remains.

Overall, I really like the Jurassic from an aesthetic standpoint. It’s still unmistakably Hinderer, but it’s a bit more visually interesting than the XM series. Maybe that’s just because I’ve been looking at XMs for years now and the Jurassic is relatively new to me.

With the Jurassic being so new, it unfortunately does not have as many custom options straight from Hinderer like the XM-series does. A lot of parts for other Hinderer models will fit it, but we’re still waiting on some things. Luckily, companies like Sharp Dressed Knives have stepped up and filled the gap with some fantastic custom scale options.

Some people may be confused because they think that the designation “Gen 6” means Tri-Way pivot. That’s never been the case. It’s an easy mistake because the XM-18 Gen 6 was the first to get this unique system. That’s because it was the sixth generation of that model. This is the second generation of the Jurassic, so therefore a Tri-Way pivot Jurassic is a Gen 2.

The Tri-Way pivot is huge step for Hinderer and has been being integrated across all of the company’s models since it was introduced in 2018.

Prior to the Tri-Way, Hinderers were known for only using Teflon washers in their pivots. Rick was a firm believer in them for the action they gave and their resistance to muck and sand.

However, with most other high-end manufacturers moving to super smooth ball bearing pivots, Hinderer gave in and gave them what they wanted. And more… 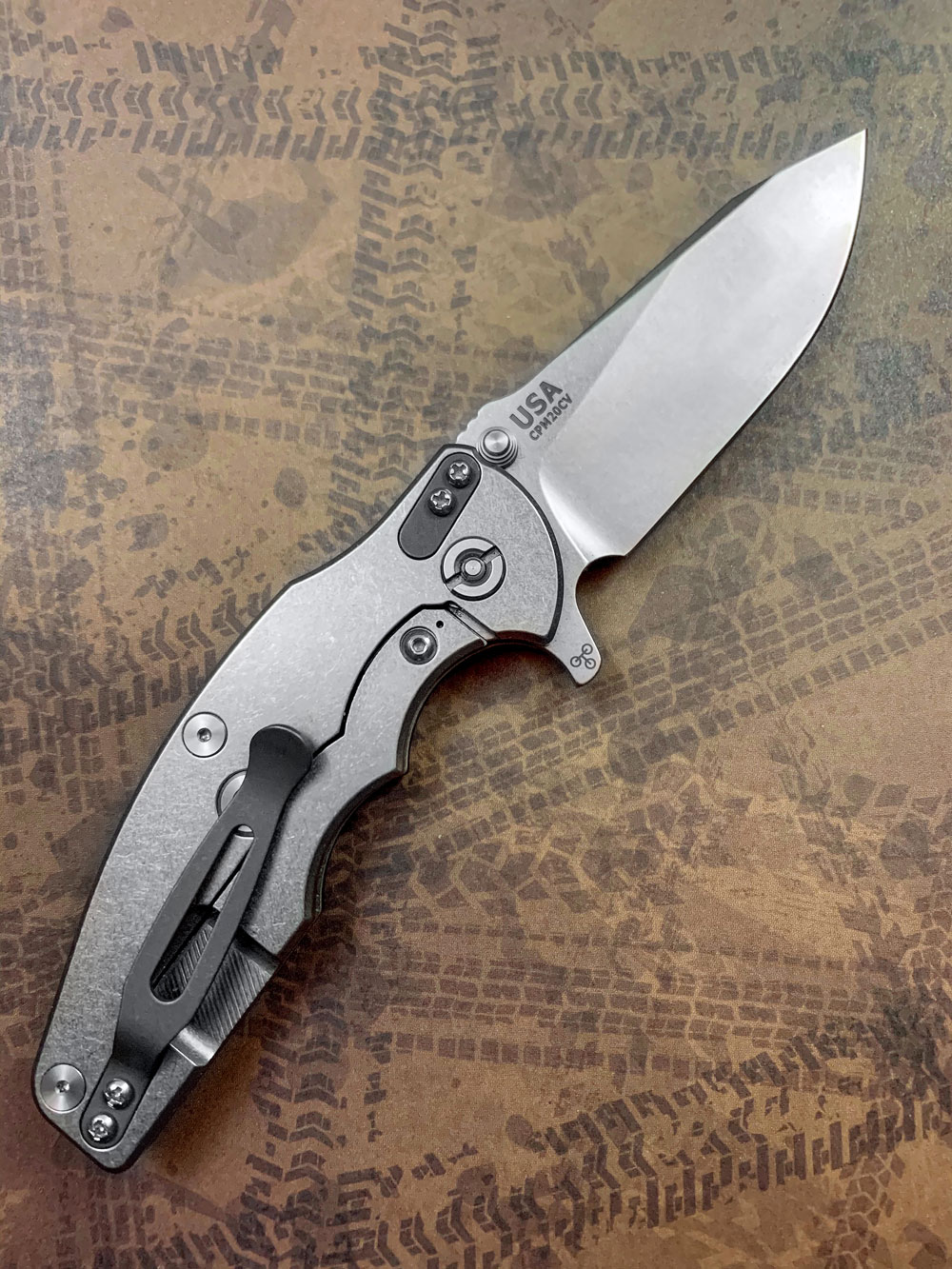 Not all custom parts for other Hinderers will fit the Jurassic, but accents like this Battle Bronze clip and filler tab combo are universal across the line. 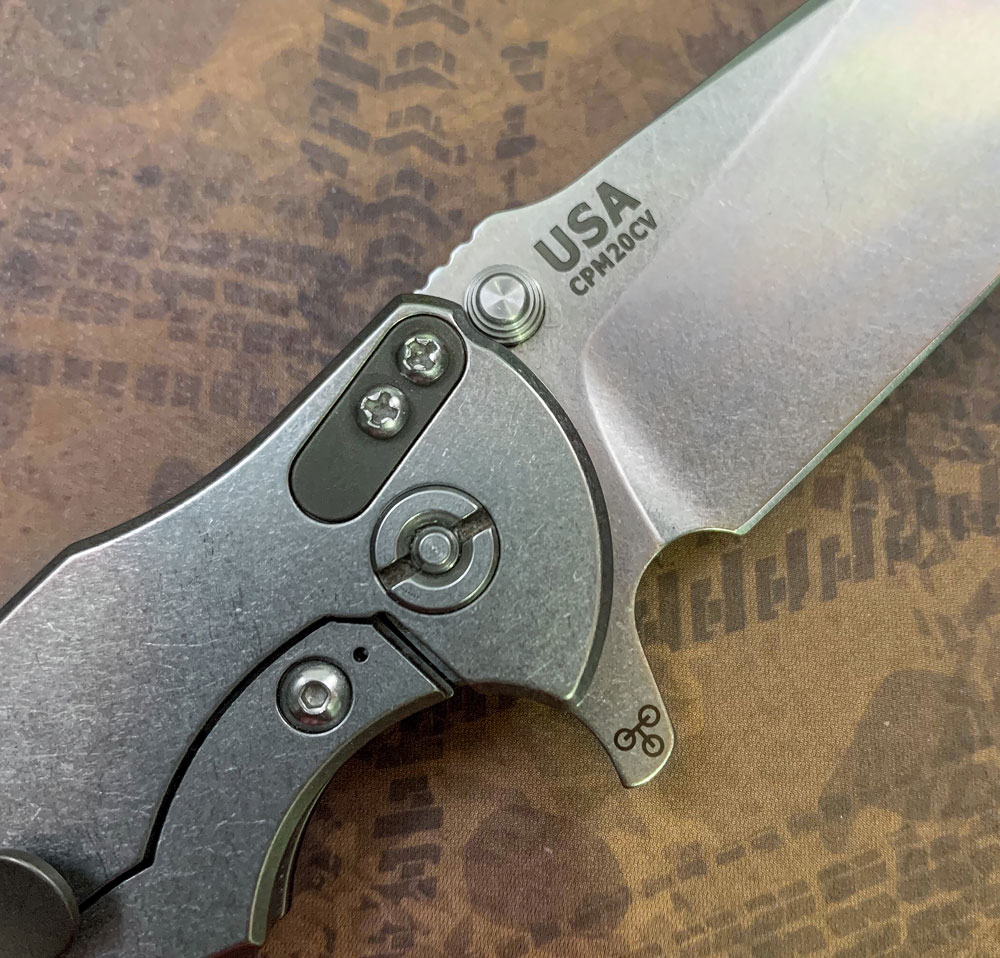 20CV steel has become pretty much standard for Hinderer outside of exclusives and special editions.

As the name would indicate, the Tri-Way pivot system gives you three options. They come with the much-demanded bearings installed, but if you want to be traditional to the Hinderers of old, you can swap them for Teflon washers. Or you can even meet in the middle and go with the included phosphor bronze washers.

It’s a brilliant system, really, and won Hinderer Knives the 2018 BLADE Magazine Award for Most Innovative American Design. I know Rick really loves the Teflon washers. Maybe this is his way of providing everyone with bearings while still ensuring that all his knives leave the factory with Teflon washers.

Whatever the reason, the action on the Jurassic is fantastic. I tried it with all three options. Deployment was good and still very snappy on either variety of washers. If you’re worried about dirt getting in your pivot and go either of these routes, you won’t be disappointed.

However, the bearings take it to a whole new level. Not only does it fire out like a rocket whether you’re using the thumb studs or the flipper tab, but it also drops shut very smoothly and with no wiggling needed to motivate it.

For a company that’s only been using bearings for a couple of years, it’s amazing how well Hinderer has gotten it right.

Hinderer knives often come with several blade shape options. At the time of this writing, the Jurassic is only available with the Slicer blade. I’m sure that will change in the future, but the Slicer actually fits this design well.

The Jurassic is geared more towards EDC than some of Hinderer’s other models so having one of their best slicing blades that is still plenty stout enough for heavy use makes total sense. As is becoming the norm with “stock” Hinderers, the blade steel is 20CV. Thickness behind the edge is about 24-25 thousandths and the blade stock is 0.16 inch. 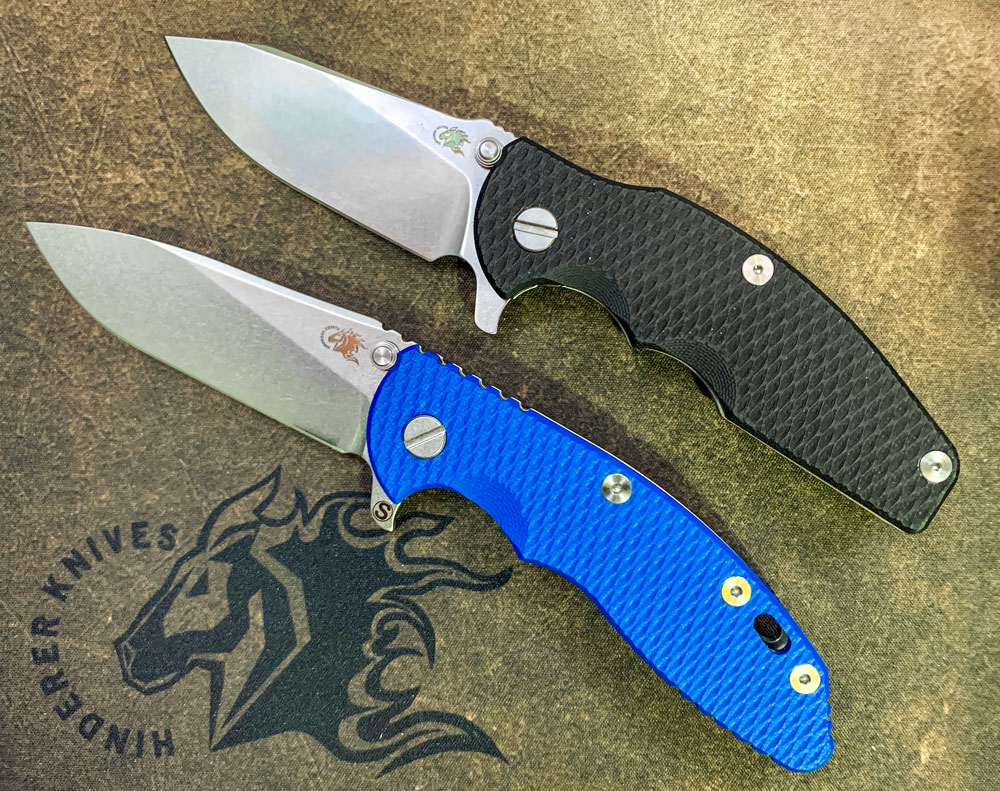 The Jurassic is just a bit shorter but a bit taller than the iconic XM-18.

So, I still haven’t explained why I marginally prefer the Jurassic to the XM-18. The answer is easy. Ergonomics. The XM-18 is a comfortable knife in the hand for sure, but it’s always going to be a bit jimp-tastic for many people.

Other than a little bit on the spine of the blade, the Jurassic is totally free of jimping. When using the flipper tab, you don’t have to worry about your delicate fingertip getting shredded on the top of the handle. There is also no worry of it grating on your hand when you try to slide past it in your pocket.

The overall shape of the Jurassic handle also works extremely well for my hand. The humpback design and mild finger cutouts fit my large-size glove hands just about perfectly. The pocket clip lands in a perfect spot in my palm where I can’t feel that it’s there at all.

The cutout on the spine of the handle is also a superb spot for my thumb to land and that little bit of jimping (combined with the aggressive G10 pattern) works perfectly to really lock you in no matter what the task. The overall ergonomic design of the Jurassic is just sublime for my hands.

This makes it easier to get your hand past and is less likely to peck away at whatever else is in your pocket. The Jurassic is a bit tall in the pocket overall, but it is a pleasure to carry other than the 5.55-ounce weight, which isn’t exactly tank-like, but is noticeable. 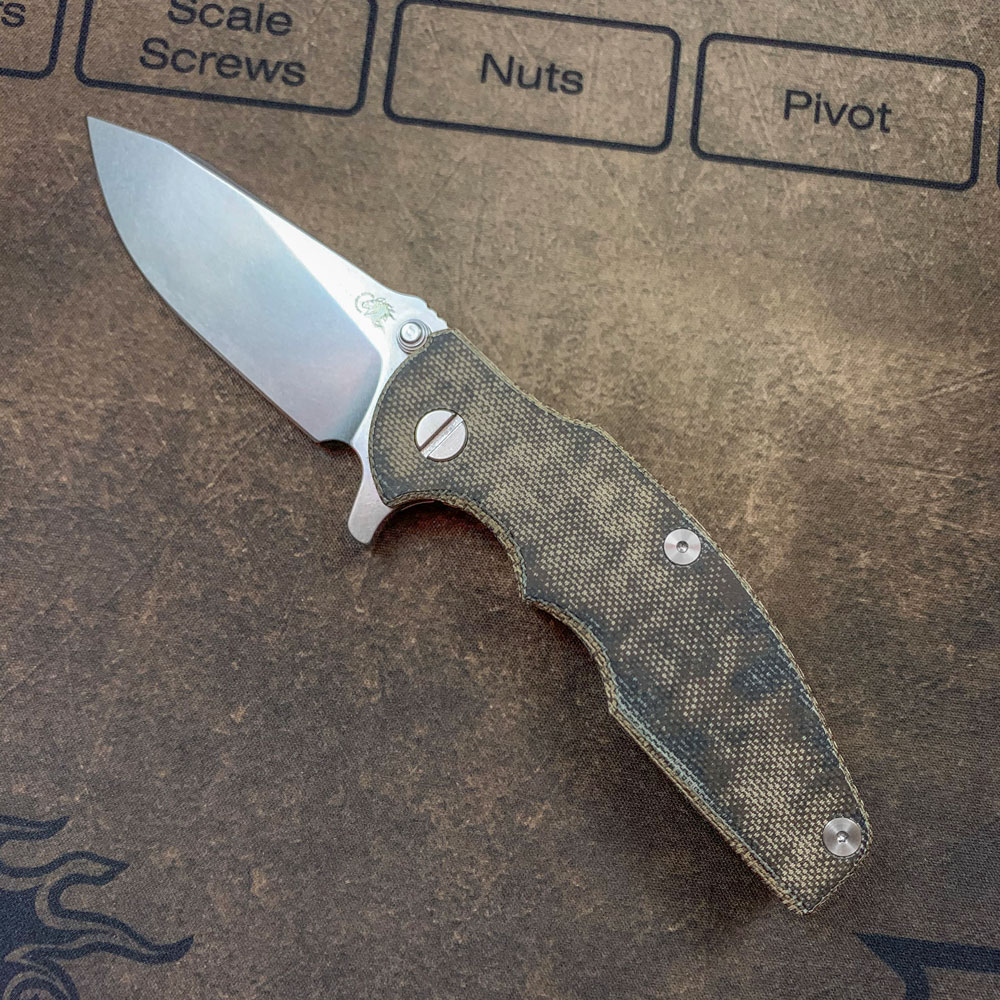 There aren’t many scale options available from Hinderer directly yet, but there are aftermarket options to be had if you want to dress up your knife, such as this excellent micarta scale from Sharp Dressed Knives.

The Jurassic has that same bank vault sort of quality feel that all Hinderers have. These are not inexpensive knives by any stretch of the imagination, but they feel worth every bit of their $450 asking price.

So, am I saying that XM-18 is dead and you should sell them all and get a Jurassic? No. That would be ridiculous. The XM series has been and shall remain a truly archetypal design and will be the flagship of the Hinderer fleet for many, many days to come.

It is definitely a bit more suited to heavy use and first responder type work than the Jurassic. It’s infinitely more customizable as well and comes in more blade shapes.

However, when people come to me asking what they should get for their first Hinderer, the answer isn’t as automatic anymore. In fact, for most people just looking for a higher-end EDC knife… I say the Jurassic. I can’t wait until we see more variants and customization options for this model.