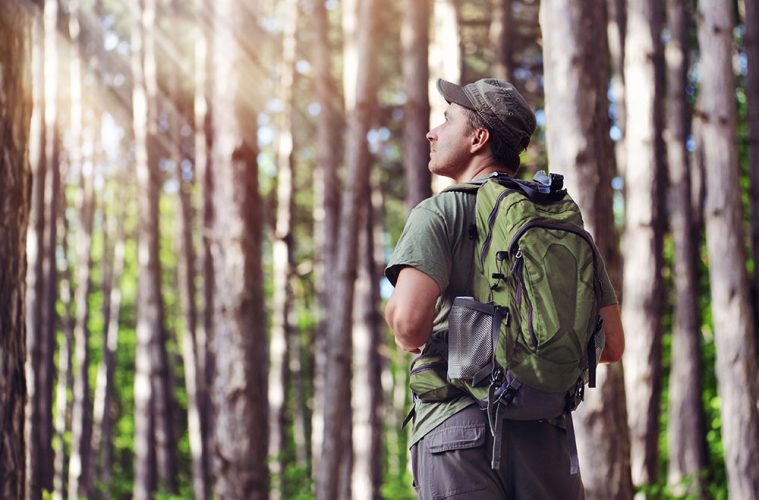 HERE ARE THE PERFECT KNIVES FOR HIKING

One day, in the fall of 2016, my beautiful bride said to me, “We should get outside more often.” As is usually the case, she wasn’t wrong. At the time, we were both working office jobs. Add to that having three kids in school, each with afterschool activities, house chores, and all the other various and sundry things that kept us on our toes, and we rarely spent much time soaking up sunshine.

So, we decided to do something about it. Beginning in mid-November that year, we made a commitment to go on at least one hike per week. It was only planned to last a year, but we’ve been at it ever since, recently hitting 275 weeks in a row that we’ve gone on at least one hike. These walks are about neither distance nor speed. The goal is just to get some fresh air, sunshine, and exercise while enjoying each other’s company.

Now, to be clear, we’re talking about day hikes, not multi-day excursions to the wild frontier. We’re packing light and planning to be on the move most of the time. As a self-professed knife guy, as well as a bit of a prepper (OK, maybe more than a bit), a hiking knife is one of my essentials when we hit the trail. I always have one, sometimes two, when we head out the door. 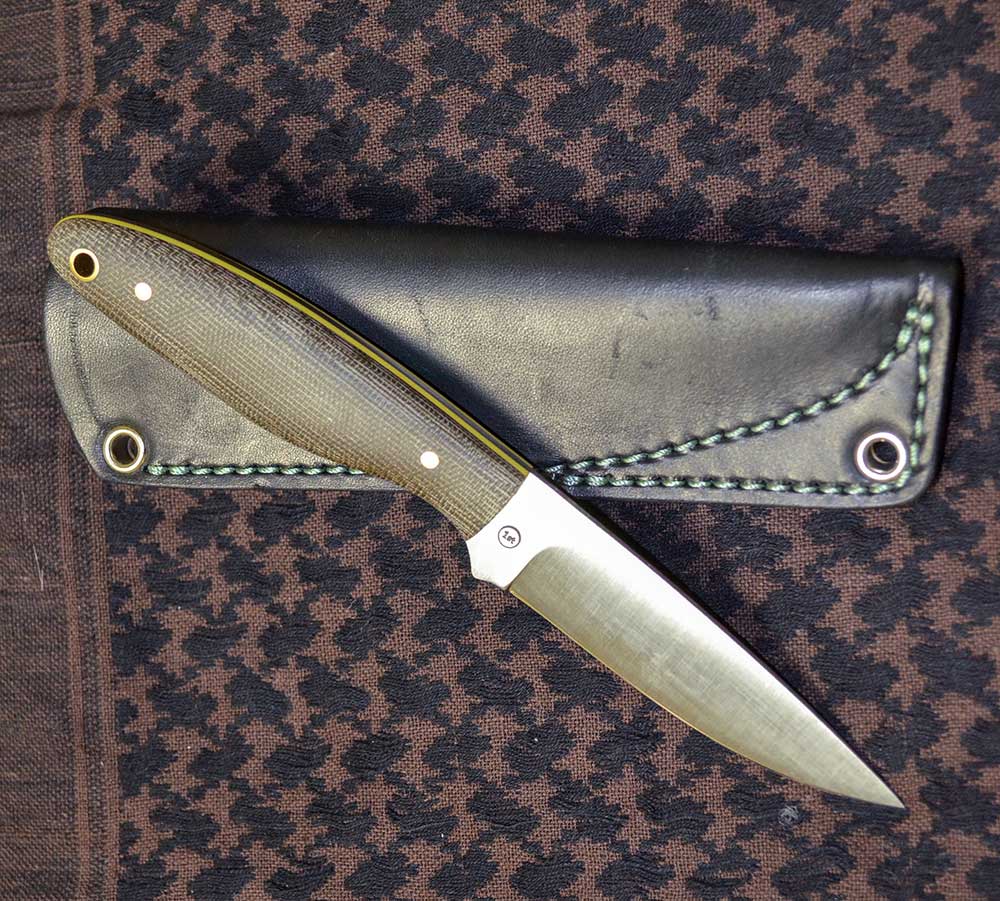 The Lapwing is a very capable slicer that’s also quite comfortable in the hand. The leather sheath that comes with it is very well-made and handsome.

Here’s what I look for in a hiking knife:

We’re not likely to be field dressing big game or any other truly heavy-duty chores. At least, not if everything goes as planned. So, we don’t need anything particularly large or robust. Sturdy and dependable, of course, but not any sort of sharpened crowbar.

As the saying goes, ounces add up to pounds, which add up to pain. But I don’t want to sacrifice quality for the sake of a half ounce. At the same time, since we’ll be doing a lot of walking, I don’t want a boat anchor dragging me down. Around 3 ounces or so seems to be a good compromise. 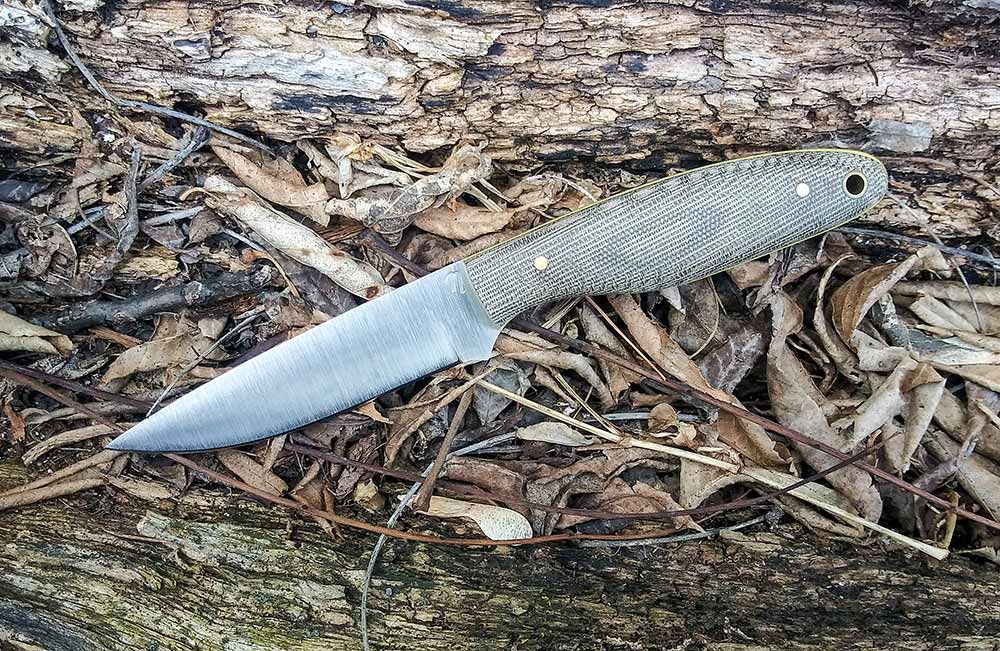 While I love the look and feel of the Nordsmith Lapwing, it does tend to blend in when you set it down outdoors.

I’ve never been one to carry knives strictly for decoration. While I certainly appreciate a handsome blade, if I’m lugging it around, it had better function as well as it looks. As I mentioned earlier, we’re not likely to be doing any serious work with a knife during a simple day hike. But, here’s the thing. Even the best laid plans can go awry, as they say. With that in mind, I want a knife that could do some heavy lifting, should the need arise.

I like a blade length of around 3 inches. That’s large enough to handle just about anything I’ll need. Because I have big hands, I also prefer a good amount of real estate on the handle. A hiking knife this size will be capable of anything I need on the trail. 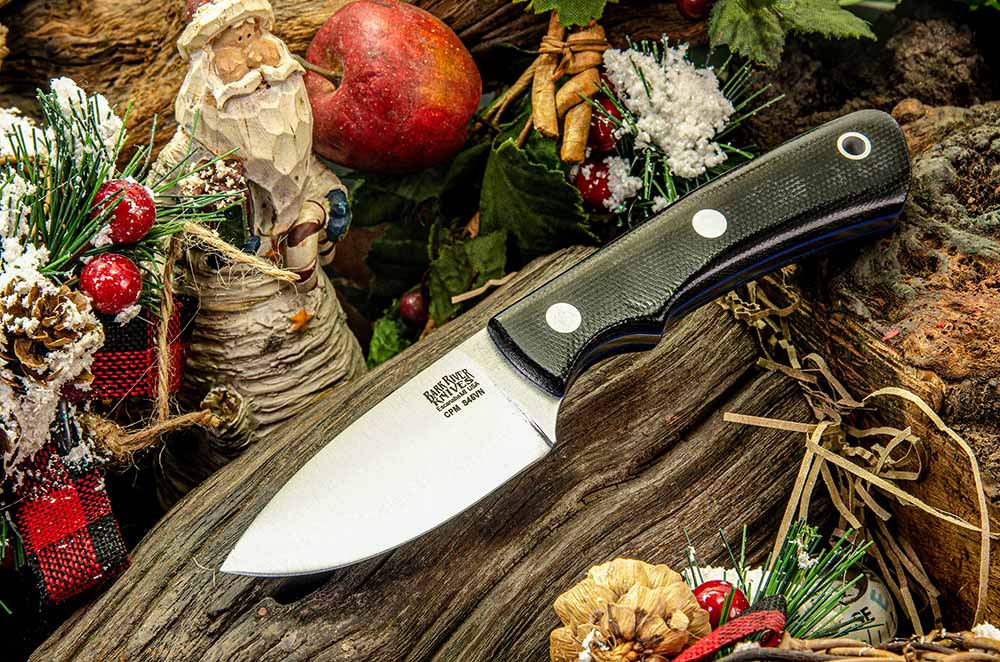 The Bark River PSK EDC is an excellent choice for a lightweight, but durable knife. Even with a shorter blade, it has enough handle for all four fingers. Bark River Knives photo.

Having the choice of either pocket or belt carry for a fixed blade is desirable. I like to have options. Depending on the hike location, the weather, and several other factors, I might be wearing lightweight shorts that don’t even have belt loops, for example, so I’d want something small and light enough to pocket carry. On the other hand, in the fall or winter, keeping a knife on my belt frees up pocket space for my fire kit, which has a disposable lighter I like to keep close to my skin so it works even in cold weather.

For sheaths, my preference is leather, simply because I’m something of a traditionalist. There’s nothing wrong with Kydex, of course. It is very durable, as well as weather resistant. But as a general rule, if I can have leather, I’m a happy guy. I don’t usually go for a pocket slip or anything for a folding knife, though those are certainly out there for folks who like them. 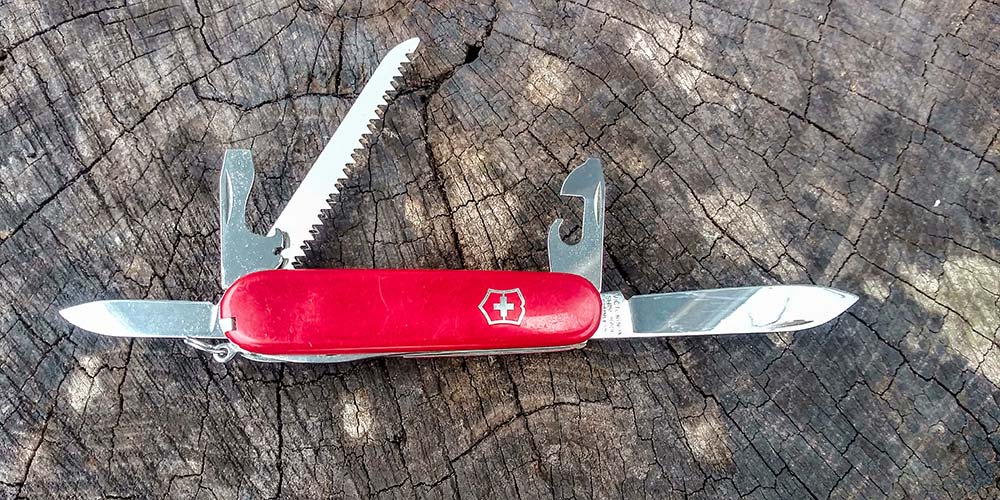 With all of that in mind, here are several suggestions for great knives to take along when hiking.

This is the largest knife on the list, topping out at 7.75 inches from end to end, with a blade stretching 3.25 inches. It weighs just a hair over 3 ounces. That’s about the same as a standard deck of cards. The handle scales are canvas Micarta, with G10 liners. There’s a lanyard hole at the end of the handle, and I do recommend adding a lanyard as the knife sits very deep in the leather sheath.

“…a knife is one of my essentials when we hit the trail. I always have one, sometimes two, when we head out the door.”

The AEB-L stainless steel makes it great for outdoor use. It arrives razor-sharp, as would be expected given that it is produced in L.T. Wright’s shop. The spine is a perfect 90 degrees, which is also to be expected and for the same reason. 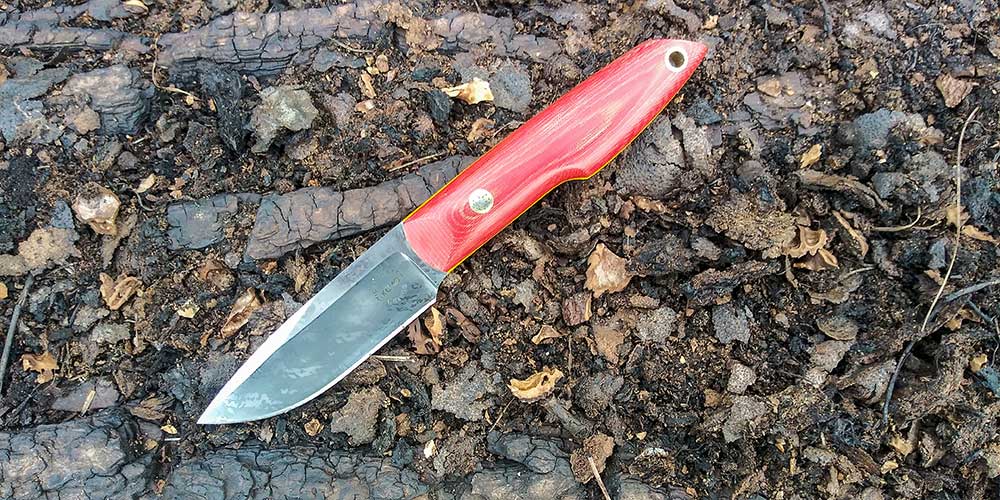 The Night Watch Interloper is slim and weighs almost nothing. The two-finger choil is surprisingly comfortable.

Made by Bark River Knives, PSK stands for Personal Survival Knife, and EDC, of course, stands for everyday carry. The 2.75-inch blade is enough for opening packages, cutting food for lunch, or slicing up cordage easily. There’s also just enough length in the handle for a full four-finger grip. As with all Bark River Knife models, it is available in a wide range of handle materials.

This knife is S45VN steel, which is corrosion resistant and has great edge retention. The leather sheath is slim enough for pocket carry, but it does have a belt loop for those who prefer that option. 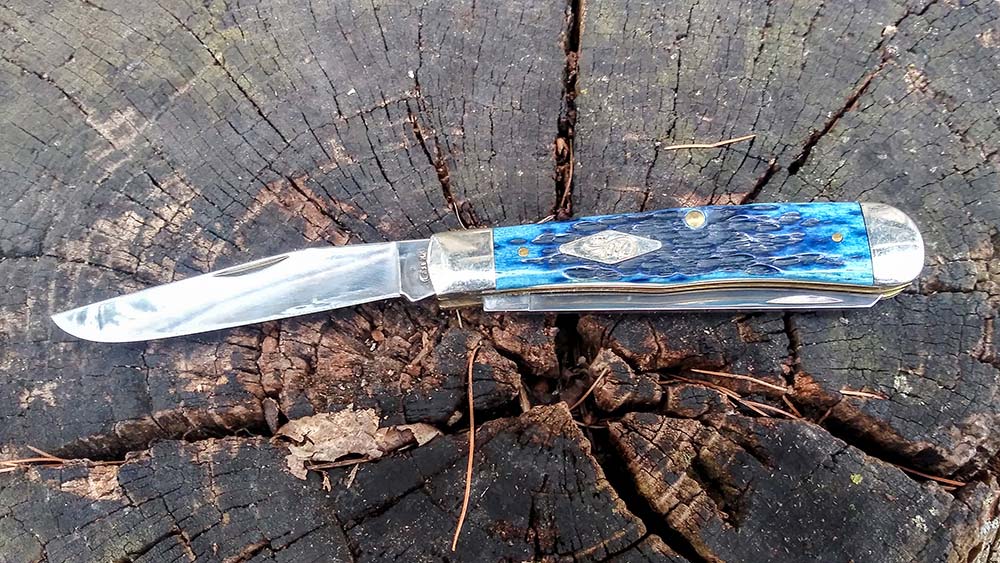 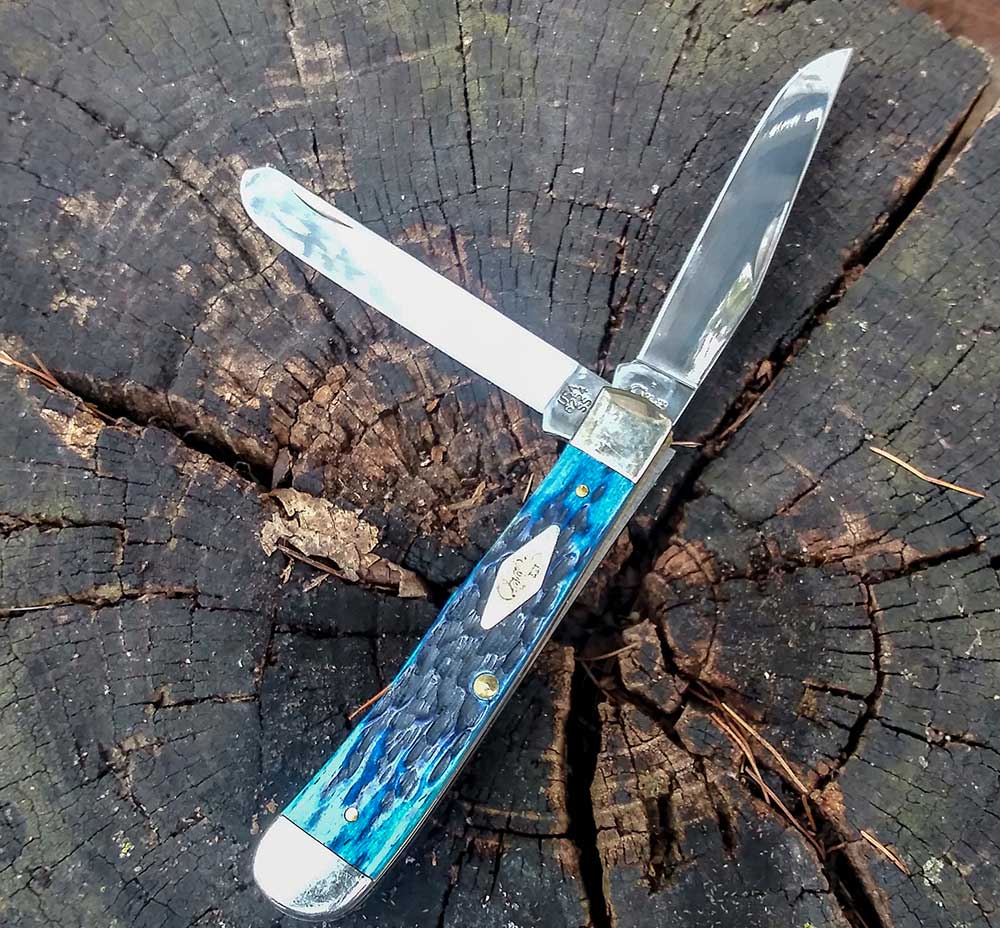 The Trapper from Case Knives is a traditionally styled folder. With two blades, you’ll have plenty of sharp edge for any trip into the field.

There are countless different Swiss Army Knife (SAK) models on the market. At last count, I own about five of them. When I’m headed into the woods, this is the SAK I grab most often, as it has a saw blade among its tool set. Even better, the saw blade actually works fairly well for cutting notches and such.

The Hiker also has the standard large blade, small blade, bottle/can openers, tweezers, toothpick, and screwdrivers (both slotted and Phillips).

As a bonus, even the strictest areas often give this ubiquitous red-handled folder a pass, rather than calling it a weapon. 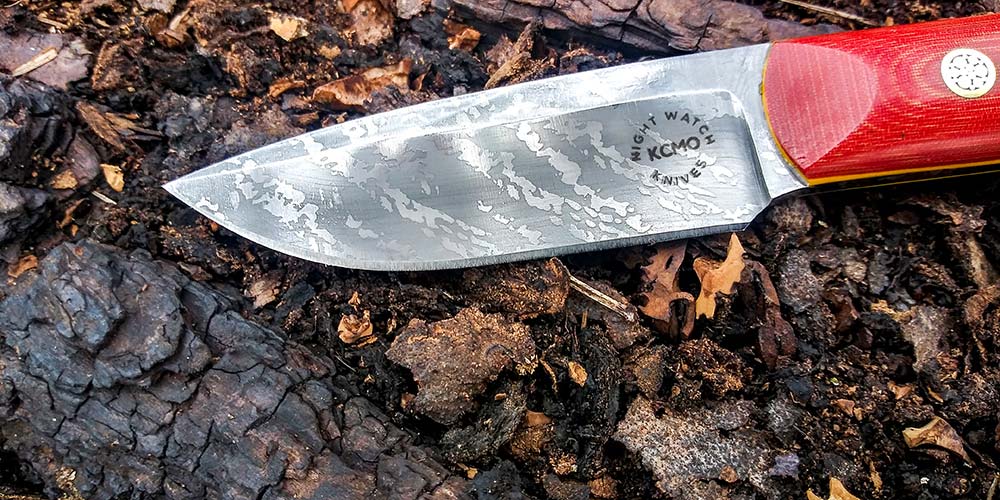 This Night Watch Interloper has an acid-etched blade finish, which is called War Wash.

I’m fairly new to the Night Watch Knives brand, but I’m impressed. Great quality and each one is handmade, with excellent attention to detail. Initially, I was on the fence about the handle, as it looks a little odd. However, once I had the knife in hand, I fully understood the two-finger choil. Between that and the scalloping done on either side of the handle right where it meets the blade, this knife is incredibly ergonomic.

This particular Interloper has an optional acid-etched finish on the blade called “War Wash.” For handle material, the knife is available in different types of Micarta. It comes with a leather belt sheath.

Case Knives has a longstanding, and well-deserved, reputation for classic or traditional style folding knives. The Trapper is simplicity itself, just two blades. No bells, no whistles, just cutting what needs to be cut. For right or wrong, when we were kids, we’d have just called it a jackknife.

At 3.8 ounces, it is the heaviest knife on our list, but that’s still less than the weight of two C-size batteries. It is simple, rugged, and dependable. Take good care of it, and you’ll be able to pass it down to a grandkid someday. 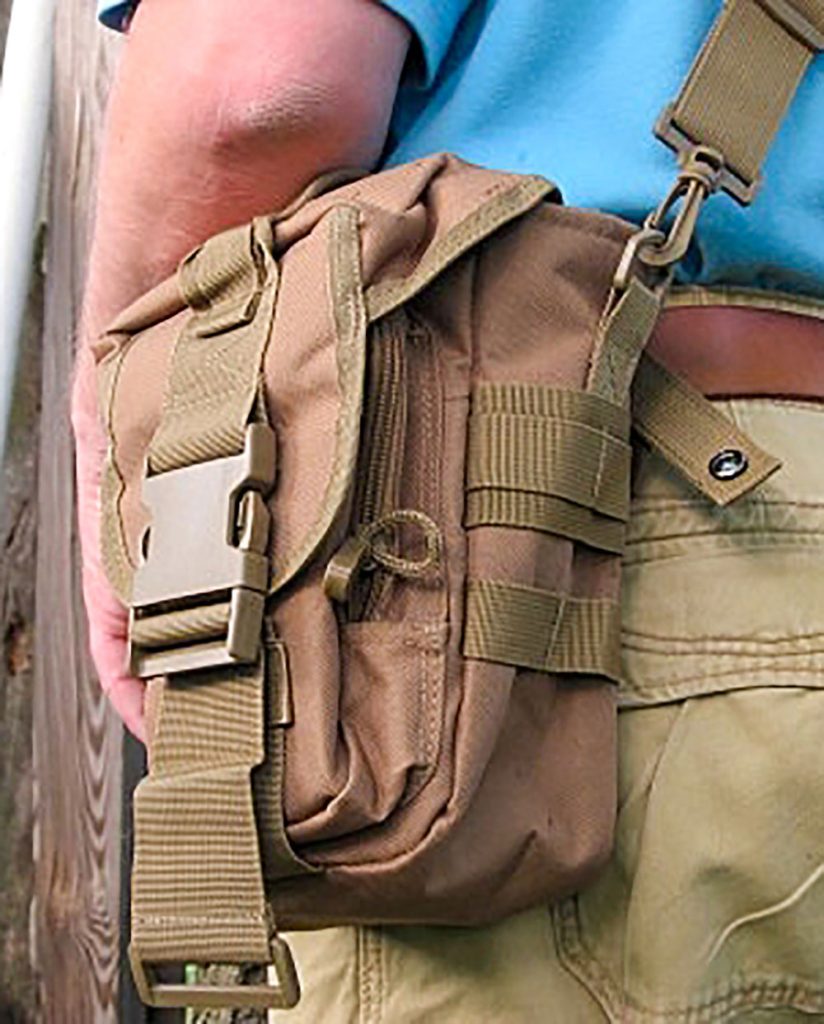 The Canteen-Water Bottle Shoulder Bag from Survival Resources is a great way to keep some gear with you without carrying an entire pack. With just enough space for water and a few necessities, it is perfect for day hikes.

This is the flagship model from White River Knife & Tool. The company is an excellent, family-run outfit based in Michigan, and the quality of its entire line is stellar. The M1 has a deep choil and is very comfortable to use. The CPM S35VN keeps a great edge, too.

It comes with a Kydex sheath that has a moveable and removable belt clip. It also has several attachment points around the sheath so you could easily strap it to a pack or other location. With the high-visibility orange handle, you’ll never lose track of it.