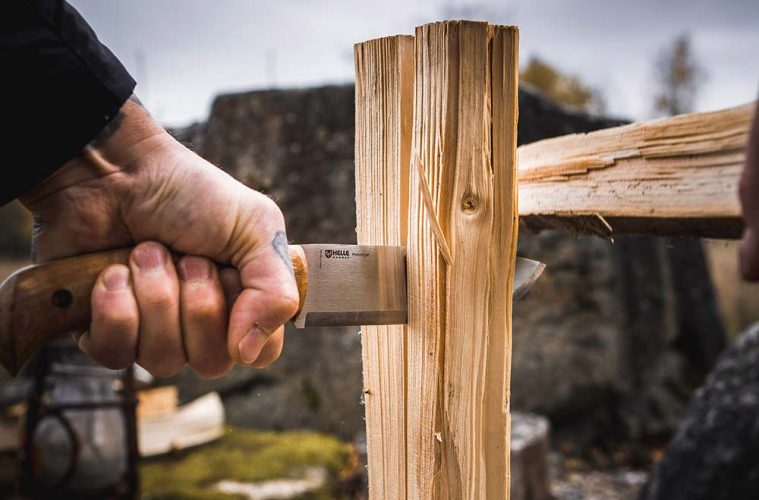 Normally, when I think of knives coming from any of the Scandinavian countries, I think of thin-bladed bushcraft blades with Scandi grinds, razor-sharp edges and traditional wooden handles.

Well, Helle of Norway has introduced something a bit different, although in doing so, it really hasn’t strayed too far from the direction it has been heading for decades as a maker of fine blades.

That direction is true north. The aptly named Nord (meaning north), according to the company, was “built for the Nordic wilderness.” That’s where having a good, dependable knife is a daily requirement and in some instances can mean the difference between life and death. 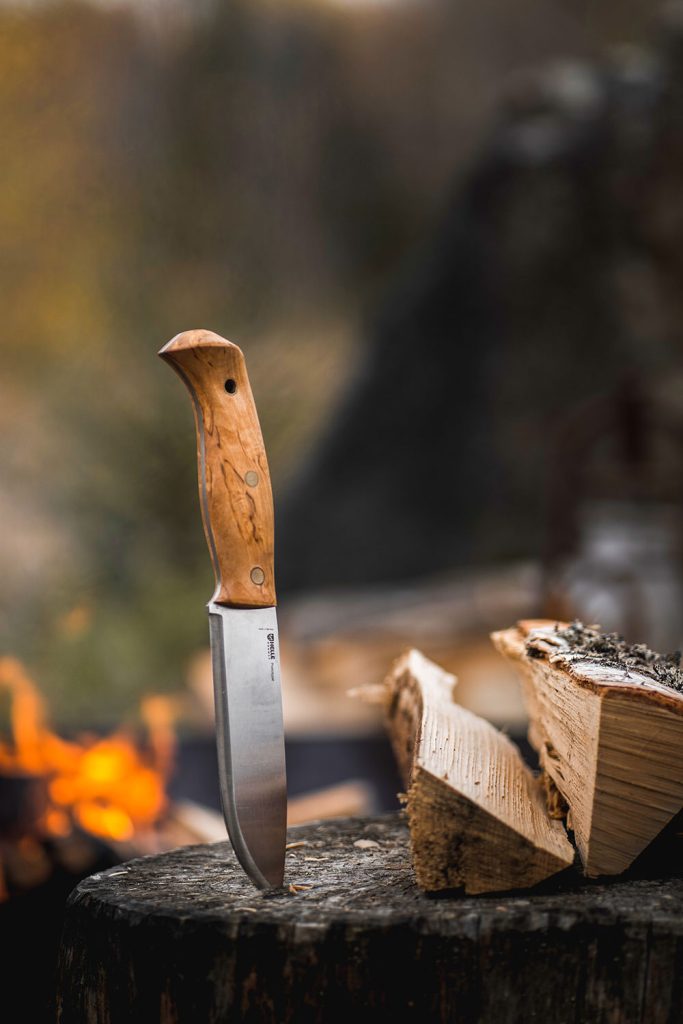 A BLEND OF OLD, NEW

The Nord has many of the features of a traditional Scandinavian bushcraft knife. It has a very sharp blade with a Scandi grind and an ample handle of curly birch wood.

Yet it blends those traditional features with what we expect of a modern, heavy-duty cutting tool. The Nord has a full tang, not a stick tang or partial tang. Its beefy blade of Sandvik 14C28N stainless steel is 5.7 inches long and about 0.146-inch thick.

According to Helle, “the Nord was inspired by the large traditional knife used by the Sami people for light chopping tasks such as de-limbing, cutting small trees for shelter poles, brush clearing, bone breaking, and butchering game.” The Nord is certainly an excellent knife for handling those tasks. Yet the company is hesitant to put a label on something that can really be a versatile, everyday field knife. 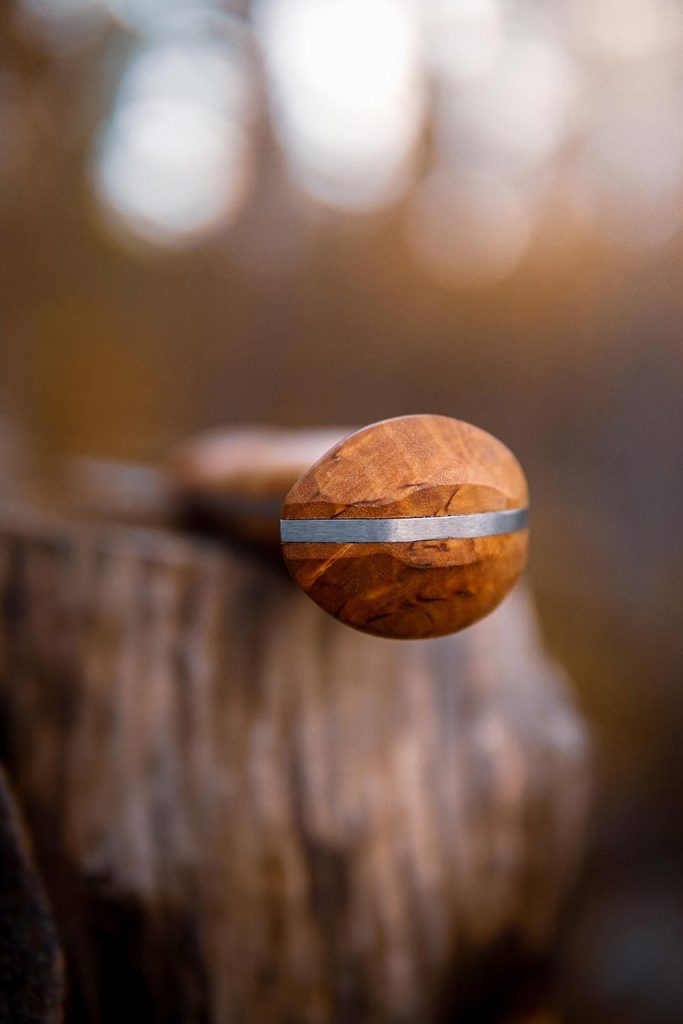 Unlike many Scandinavian knives, the Nord features a full tang that gives it added strength for tough jobs.

“The Nord unites our traditions with how we have evolved, using tools in new ways from our forefathers, although we didn’t want to label the Nord with terms like survival or bushcraft,” said Anders Haglund, Helle’s director of marketing and co-developer of the Nord. “In the wilderness, these words are meaningless; the only way to build useful knives that are comfortable in the hand is to use them in the field.”

On taking the Nord in hand, I got the immediate impression that I was holding something special. The handle is large, about 5 ¼ inches long and almost 1 ½ inches at its widest point. That size will be appreciated not only by those with large hands, but also by anyone who needs to take various grips on the knife to accomplish a wide range of cutting tasks.

The handle is well contoured and provides for a secure grip without the need for finger grooves, which usually try to dictate how you need to hold a knife.

I held the knife close to the cutting edge for finer, more detailed cuts. I found the Nord to be very nimble in the hand for a knife this size. I felt I had excellent control, more so after realizing I could back off a bit on the pressure I exerted, and simply let the blade weight and sharp edge do the work. 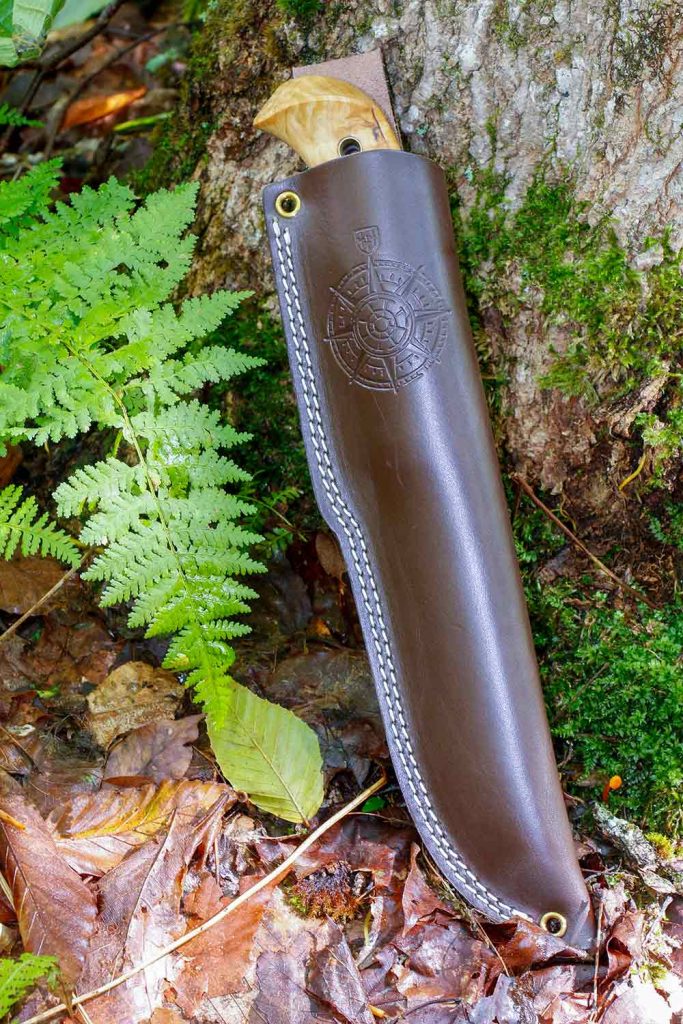 The Nord comes with a handcrafted leather, pouch-type sheath that holds the knife securely.

I held the Nord in the middle of the handle when slicing wood into finger-thick sticks for kindling. For tinder, the 90-degree blade spine has enough of an edge to produce paper-thin shavings. The blade spine served well for striking a ferro rod, too.

Holding the Nord even further back, even to the point of wrapping my pinky finger around the back of the “bird’s-beak” pommel, I found I had plenty of leverage for some light chopping.

“I felt I had excellent control, more so after realizing I could back off…on the pressure I exerted, and simply let the blade weight and sharp edge do the work.”

There’s something classic about wood mated to steel, whether it’s in knives or firearms. I like the look and feel of the curly birch handle scales on the Nord and the natural variations in the wood will mean each Nord will have a distinct look.

The Helle website recommends treating these scales with natural products such as beeswax or linseed oil. The scales are fastened with brass hardware, including a tube for fastening a lanyard if you’re so inclined.

The Nord comes with a deep, pouch-style sheath of dark brown leather that features stamped imprints of the Helle logo and a compass star. 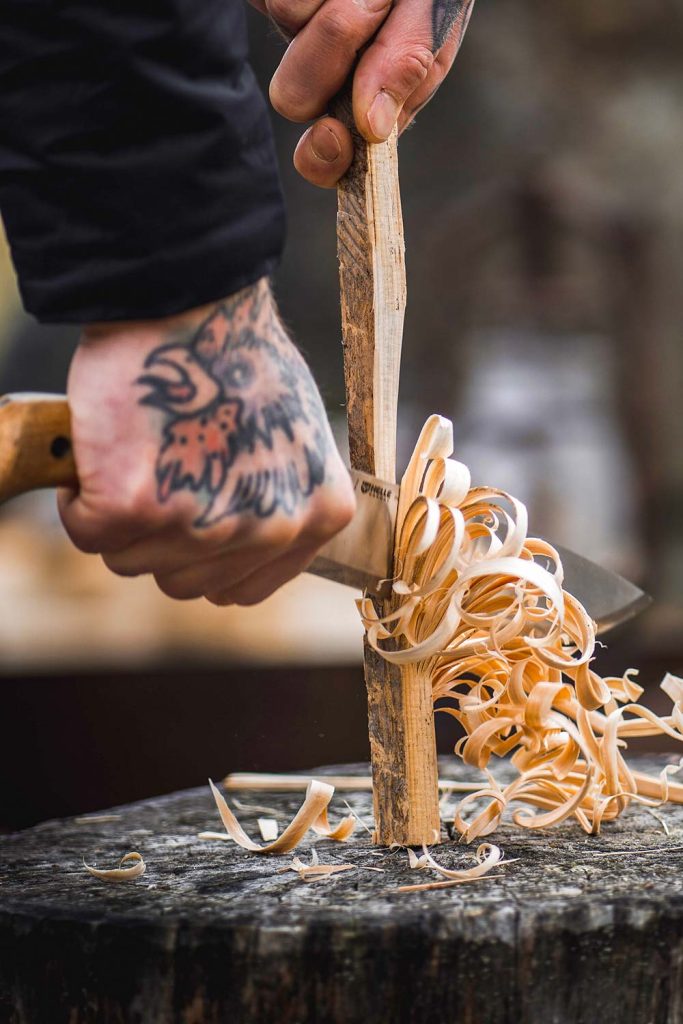 Let the blade do the work. The Nord feels good in the hand and provides for good control in any of several grips you can take on the handle.

It’s been said many times and many ways that a big knife can handle most small-knife jobs, but when you need a big knife, only a big knife will do. I found that out a few years back when my SUV became stuck along a snow-covered dirt road on some forest land far from the nearest tow truck. I used the big knife I had with me to cut some spruce boughs to put under my vehicle’s tires to provide enough traction to get me going again.

There will always be jobs for big blades and I see the Nord as being an excellent choice when there’s work to be done or when you need the comfort of a big knife when traveling far from civilization. 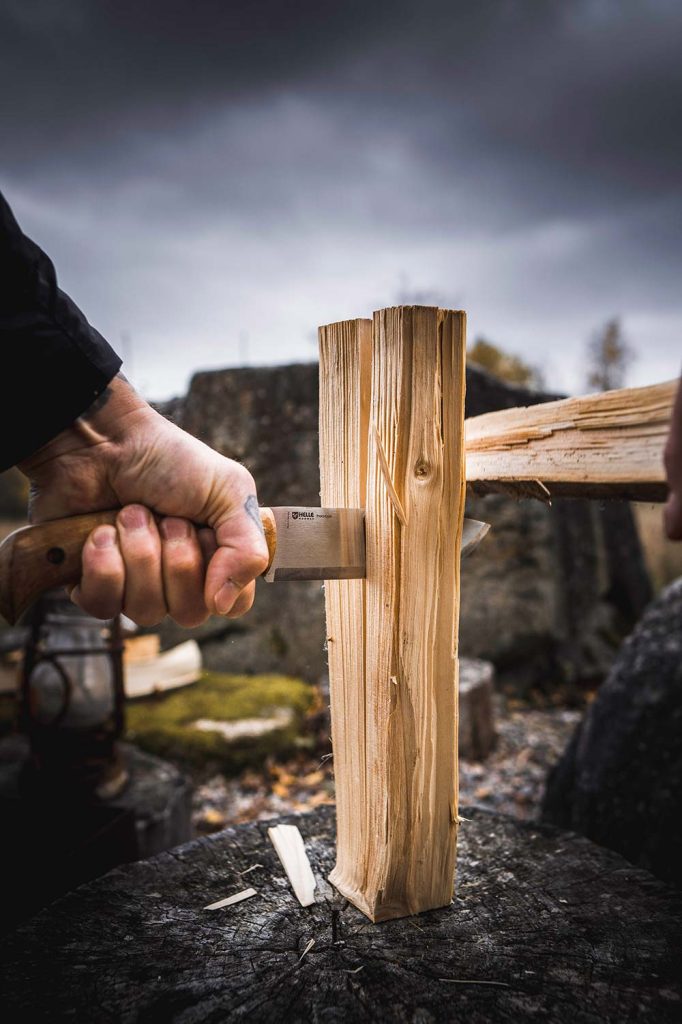 The Helle Nord is capable of heavy-duty work that smaller blades aren’t equipped to do. 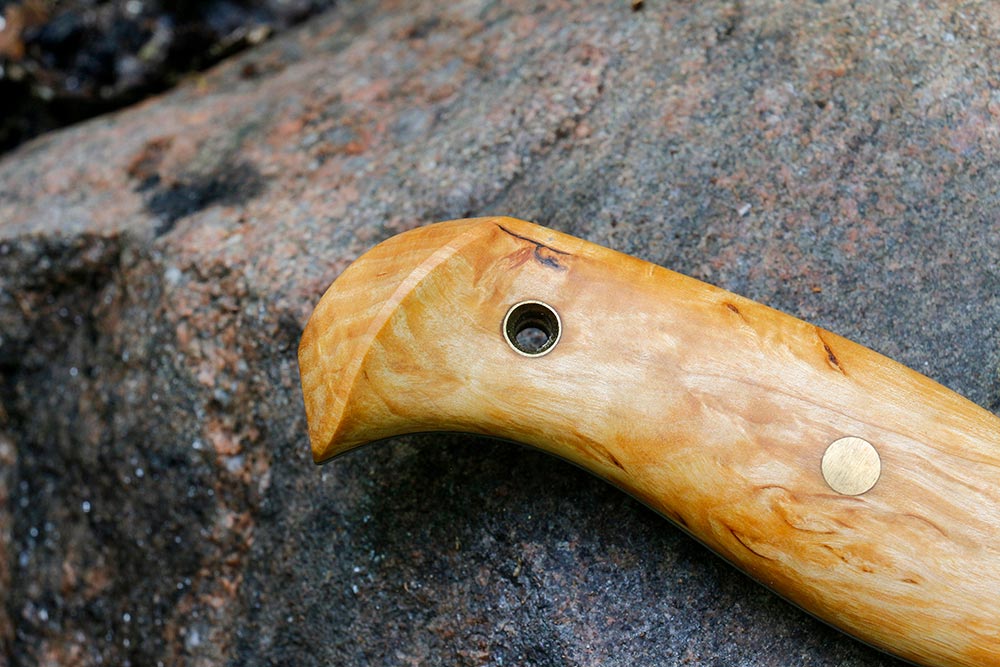 The curly birch handle of the Nord is attractive, comfortable, and provides excellent control. A brass tube allows for a lanyard if desired. 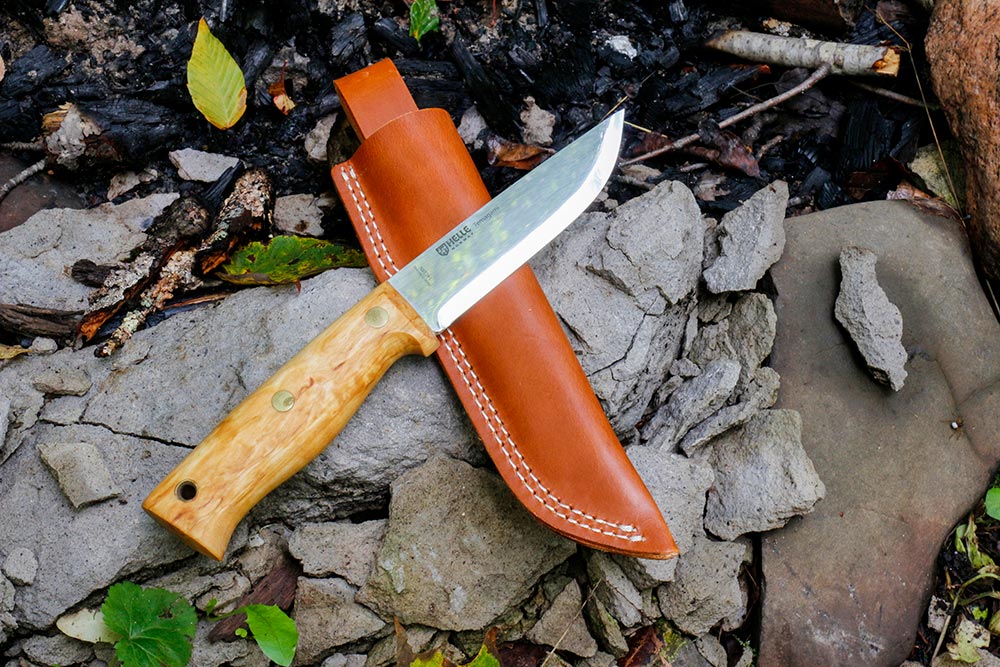 Helle introduced the Temagami, designed by “Survivorman” Les Stroud, in 2011, but it was upgraded this year with Sandvik 14C28N steel. Author photo. 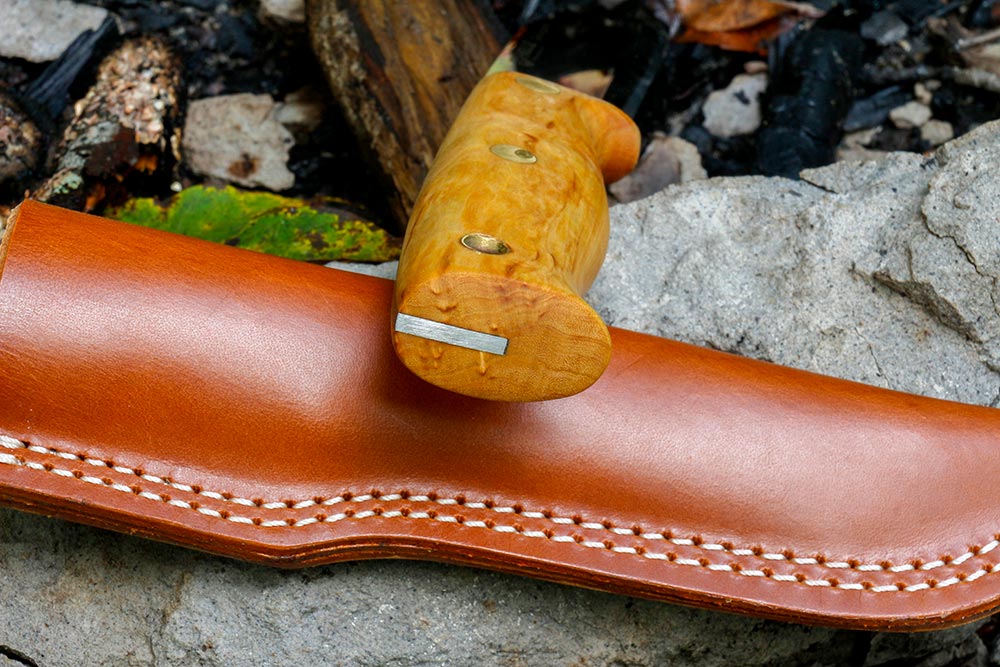 The tang of the Temagami runs the full length of the handle, but it’s just 3/4-inch wide. Author photo. 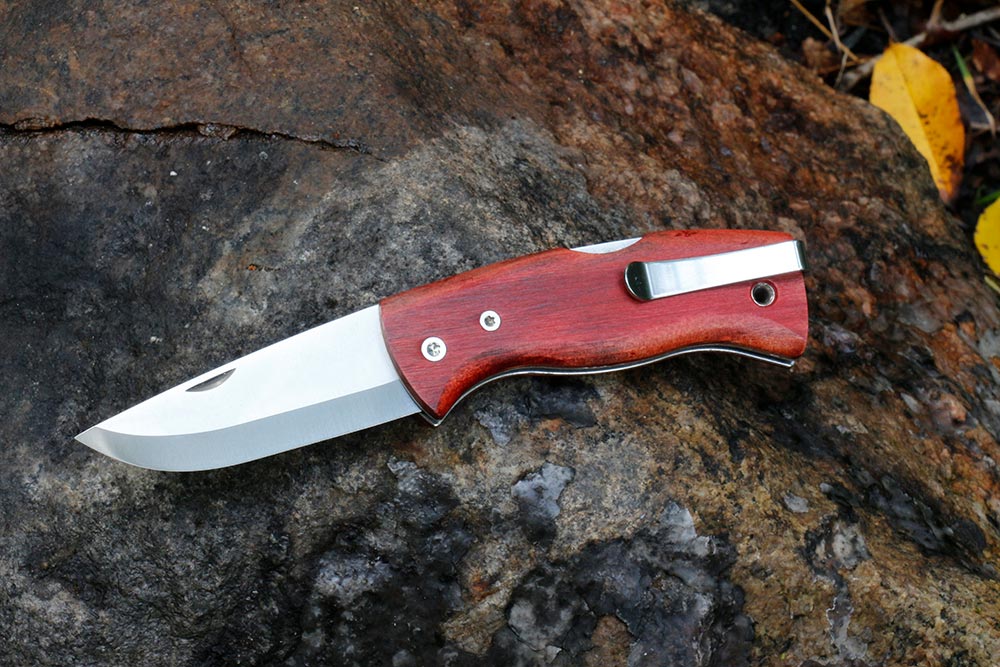 The author found the Raud M to be a great companion blade to the Nord or Temagami and he often carries it as a stand-alone EDC knife as well. Author photo. 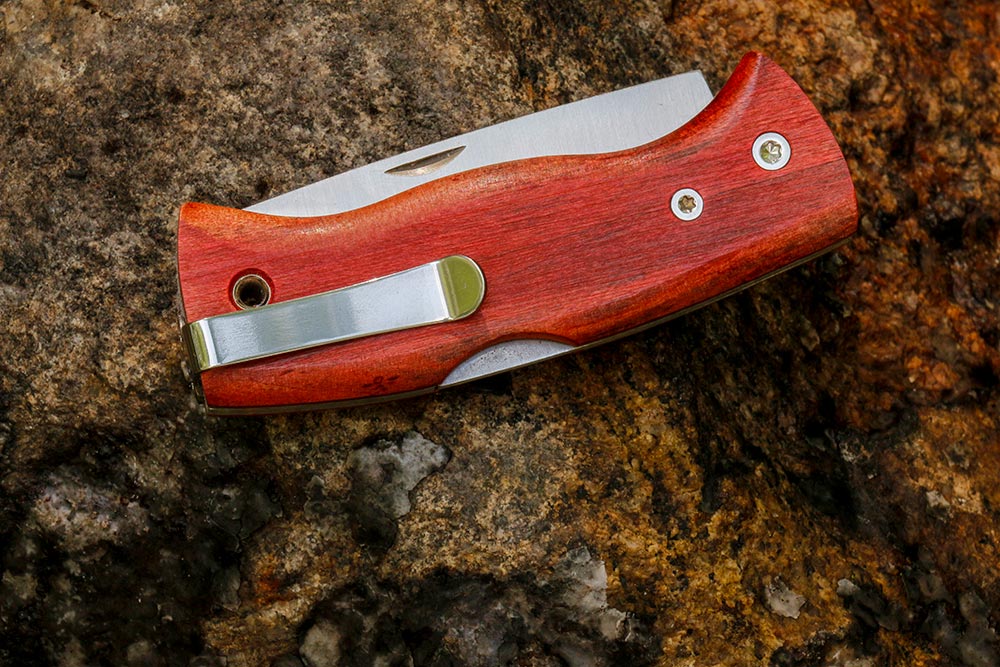 The Raud M has traditional birch wood handle scales dyed red. The author found it a joy to carry and use. Author photo.

A GREAT TRADITION FROM HUMBLE BEGINNINGS

Helle knives are made in Holmedal, Norway where brothers Steinar and Sigmund Helle started making knives in 1932. The company continues under the third generation of family operation. According to Helle spokesman Anders Haglund, the company didn’t have a connection to the electrical grid in the early days, and powered its machinery by channeling rainwater and snowmelt down from the mountains.

And talk about determination, when deciding to sell knives beyond the local community, Steinar Helle took a steamer to Bergen and then rode a bicycle 375 miles through mountain passes with a backpack full of knives to Oslo.

It’s a romantic image to associate knives made in the Scandinavian countries with Viking or Norse heritage, but in the case of Helle knives, there is an actual connection to the past. When the Helle company started to excavate the site of its Holmedal factory in 1926, workers uncovered the remains of a boat that dates, experts believe, to approximately 600 A.D., just prior to the time of the Vikings.

The boat, which measured 9-to-10 feet at the keel, is believed to be a grave site, as a deceased person in that period was often buried in his ship. Inside the ship were the remains of an oak coffin, pottery, and other grave items.

While I appreciate a big knife such as the Nord, many times I find a slightly smaller knife usually suits my needs quite well. Those are the times when I am traveling light or I have an axe or hatchet handy to do any heavy-duty chopping chores. Helle has made the Temagami since 2011. But this year, the company has updated this knife by making it from Sandvik 14C28N stainless steel.

The Temagami was designed by Les Stroud of television’s “Survivorman” fame. It features a 4.3-inch blade that’s 0.118-inch thick with a Scandi grind. It has a tang that runs the full length, but it’s just 3/4-inch wide, not the full width of the handle.

The handle is curly birch, 4.72 inches long, and features great handling characteristics. The handle curves down slightly and is flared at the end, so it’s a bit different than that of the Nord, but no less effective. The Temagami weighs 5.47 ounces. It comes with a leather sheath. The MSRP of this model with the upgraded steel is $209.

HELLE RAUD M: A GOOD COMPANION TO THE NORD

I’m usually not a one-knife guy. When I’m carrying a big knife on my belt or in my pack, you can bet that I have a smaller knife tucked away in a pocket somewhere. The perfect small knife companion to the big Nord is the Helle Raud M. The “M” stands for “Medium,” as there’s a smaller version of the Raud, too: the Raud S.

I’ve been carrying this little knife for some weeks now. It’s like carrying a small bushcraft blade in your pocket. I’ve found it to be a sturdy knife with 2.72-inch blade of Sandvik 12C27 stainless steel, and a very sharp edge on a Scandi grind. The back-lock bar clicks solidly into place upon opening the blade.

The handle is birch dyed in the traditional red of Scandinavian knives. There’s a reversible pocket clip, too, for right- or left-side carry. The handle is about 3.7 inches long. I found in using it that I could just get four fingers on it, but often found it more comfortable, and just as secure, to curl my pinky finger around the tail end of the handle. This little knife is going to spend lots of time in the woods with me on hikes, hunts, and curiosity wanderings.