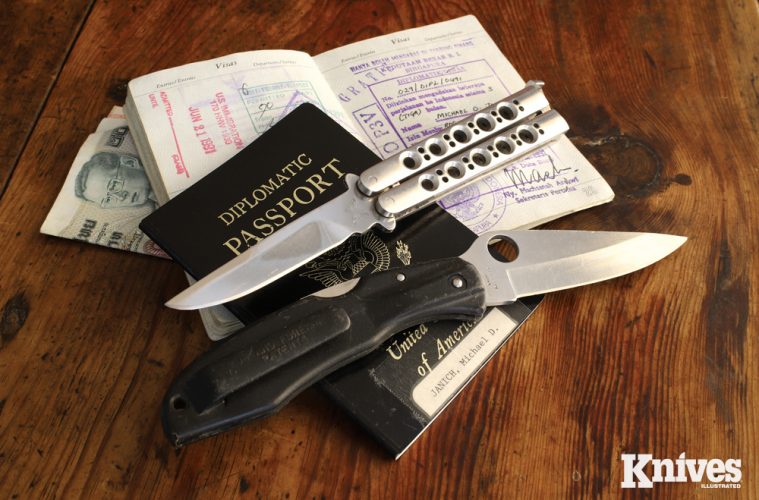 If you visit any internet knife forum, odds are you will see an active thread with a title of something like, “What is the best knife for self-defense?”

You will probably see the same repetitive litany of useless comments like, “Don’t bring a knife to a gunfight,” “In a knife fight you’re going to get cut,” “Just run away,” and so on.

Sadly, such threads rarely result in useful discussion and, when they do, the advice given typically focuses on the technical aspects of knives rather than the practical aspects of their carry and use.

I became interested in knife-based self-defense when I first started learning the martial arts as a teenager, but it wasn’t until I was stationed overseas that I made it a priority in my training. The reason was simple: I was working and traveling in environments that posed a significant threat of violence.

Even though I was assigned to a U.S. embassy or consulate, I was not authorized to carry a gun and as a foreigner, I was prohibited from even owning one privately. Knives, on the contrary, were legal to own and carry.

And since I had a diplomatic passport, I could bend the rules pretty far for what I could carry. From a standpoint of necessity, practicality, and legality, the knife became my primary defensive weapon. 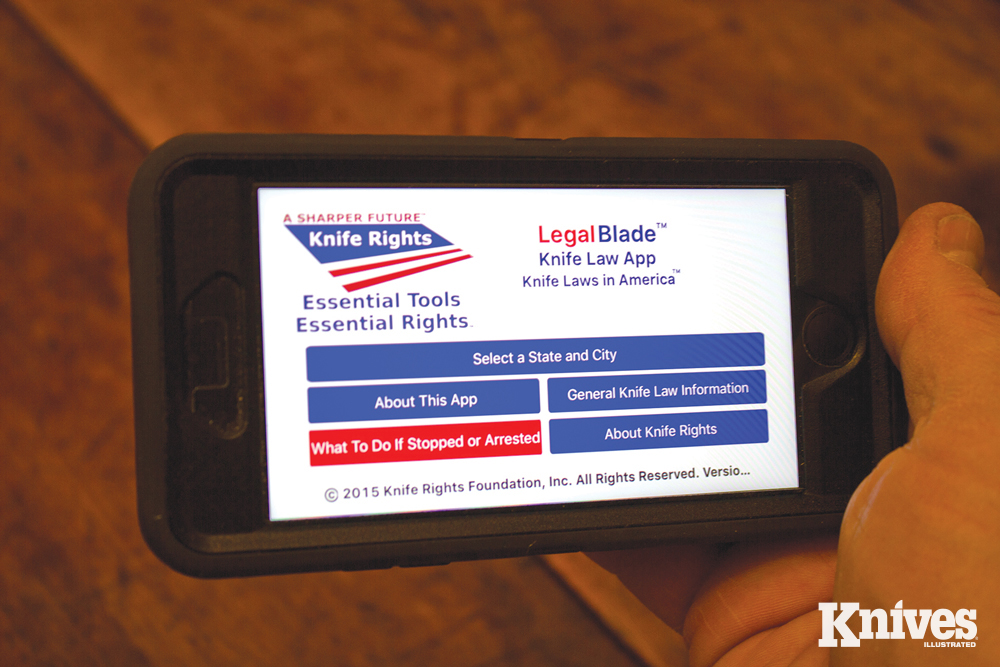 Within the U.S., Knife Rights’ Smartphone app Legal Blade is a great resource to determine what’s legal to carry. For overseas travel, internet knife forums are about as good as it gets.

Nowadays, I live in a state where concealed carry is allowed, so whenever possible, I carry a handgun as a primary lethal-force weapon.

However, since I travel frequently and often have to work in non-permissive environments where firearms are not an option, my knife — or more accurately, knives — regularly return to a primary role.

In the U.S., I use Knife Rights’ Legal Blade smartphone app to research the laws of the cities and states to which I travel, so I can ensure that I’m carrying something permissible.

When I travel internationally, however, things get a lot more complicated. To do my best to remain reasonably well-armed and play by the rules of the countries I visit, I’ve developed a few “rules of thumb” that guide my strategy.

01. Do Your Homework  in Advance

Knife laws vary dramatically from country to country, so doing research in advance is invaluable. Internet knife forums typically have international membership, so using them to ask about knife laws and their actual enforcement for a particular country usually elicits good information from natives and frequent visitors.

You should also search the internet for any formal documentation of the country’s knife and weapon laws that describe what you can and can’t carry. 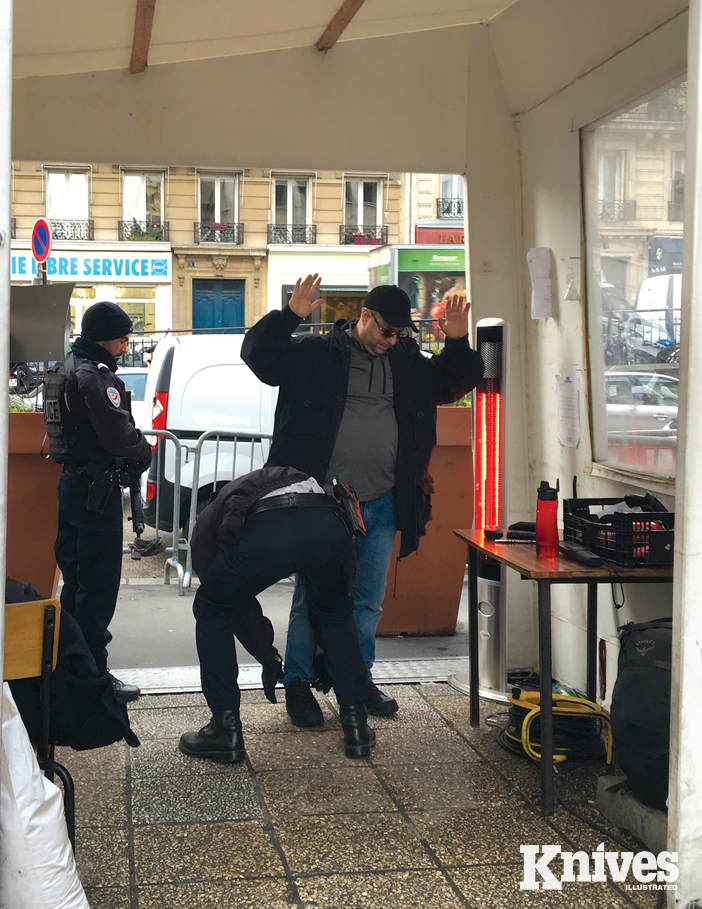 MBC Certified Instructor Marc Galli is being searched on the way into the Paris Police Museum. Like most other life experiences, being polite goes a long way.

02. If Possible, Carry What the Locals Do

If you’re traveling to a country known for a signature style of pocket knife, invest in one of those. Even though as a foreigner you’ll still stand out from the locals, if you carry the same style of knife they do, you’re likely to have fewer problems if you’re questioned about it.

While you can certainly wait until you’re in-country to buy a knife, pocket knife that also leaves you unarmed for a while and prevents you from practicing your skills with that knife before you travel. Sooner is better.

Germany prohibits the carry of one-hand-opening, lock-blade knives. Paradoxically, they allow the carry of fixed-blade knives with blades less than 12 centimeters (about 4.7 inches), provided they are not purposely designed as weapons or specifically carried for self-defense.

With this type of law in mind, the best way to stay armed would be to carry a traditional- looking knife with a wood handle and a leather sheath, not a black-bladed tanto in a quick-draw Kydex rig.

In general, the more utilitarian a knife looks, the better off you are. Traditional ethnic knives also tend to be less expensive than tactical blades, so if your knife ends up being confiscated, you’ll limit your losses.

If you are questioned about your knife, be respectful to the officer and explain that you are carrying it as a tool, not a weapon.

If he insists that it is illegal, apologize and tell him that you’ll “understand” if he needs to confiscate it. Compared to checking out the décor of a foreign jail cell, it’s the smarter move.

05 Life Without a Defensive Knife

Truth be told, the knife laws in some countries are simply too severe to make it worth the risk of carrying one. In that case, be prepared to carry a flashlight, tactical pen, or a similar improvised weapon instead of a knife.

However, as with your knife skills, make sure that you have the training to use them effectively. In fact, in the weeks before you travel, focus your training on the tools you’ll actually have, to make sure you can change gears when the situation demands it.

Give Them What They Want

During a recent trip to Paris to teach a Martial Blade Concepts (MBC) seminar, my host, renowned French custom knifemaker Fred Perrin, one of my certified instructors, Marc Galli and I decided to visit the Paris Police Museum.

Although carrying an innocuous non-locking folding knife is generally accepted in France, in the wake of recent terrorist attacks and public protests, the carry of any knife is now a calculated risk. As such, we all agreed to leave our usual Paris-friendly carry knives at the hotel.

When we arrived at the museum, which happens to be located inside an active police station, we were stopped by two officers (armed with submachine guns) and asked one at a time, to empty our pockets.

Fred went first and although the officers examined his pen and flashlight closely, they handed them back to him. I went next and once again, my pen (a Tuff Writer Precision Press Pen) and flashlight drew their attention.

When Marc produced a Tuff Writer clickie and flashlight, the officers decided that there was too much coincidence and called us all back to the security checkpoint. They told us that we had to leave our pens and lights with them while we visited the museum, but that we could retrieve them on the way out.

We politely agreed and proceeded to enjoy the museum’s impressive displays of vintage brass knuckles, pocket pistols, and other weapons.

On the way out, we noticed the officers had changed shift. Curiously, one of the new officers had trained with Fred and immediately recognized him. As we collected our pens and lights, he wryly commented that he’d be surprised if that’s all he was carrying.

A few minutes later as we sat down to lunch, I asked Fred if he had “forgotten” to show the officers anything else he was carrying. He smiled and proceeded to produce a coin purse palm sap, a sharpened money clip, a key knife, a coin knife, and several titanium blades.

Surveying his pile of undetected treasures, he commented, “When you give them what they want, they usually stop looking.” Gotta love Fred Perrin…