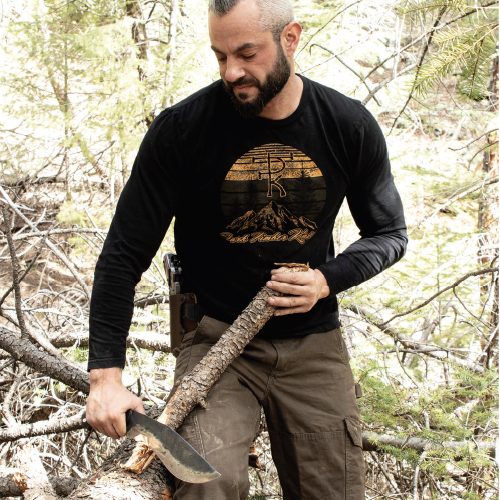 More than a Maker: Peter Kohler

Peter Kohler of Dark Timber Custom Knives was interviewed by Knives Illustrated’s Amber Hargrove and Josh Swanagon. They talked about his journey as a knife maker.

You may see him as someone who likes to make knives, but this man is so much more.

The Start of the Journey

A knife maker’s first introduction to knives is always fascinating. For Peter Kohler, did it inspire him to design knives? What was his earliest experience with knives? We learned Peter was a pre-teen on a horseback-riding trip with his father in Jackson Hole, Wyoming. It was on that trip when Peter purchased his first knife. He remembers looking at the knife case “like it was a treasure chest.”

Peter, as most knife makers, did not start out running his business full-time. He worked as a respiratory therapist in the pediatric sector in Denver, Colorado. His foray into knives really got going as a primitive archer and bowyer.

The Spark of Knife

Kohler describes the “ah-ha” moment as, “I went out hunting one year and couldn’t afford the knife I wanted. Since I had already made my own bow, I decided that I would make my own knife. When my hunting partner wanted one as well, it kind of just took off from there.”

Peter transitioned into knife making full-time after his hero, Samuel Lurquin, asked him to make a knife. Once that happened, Kohler realized the value in what he does.

Kohler’s first mentor was Dan McNeil, who was not a knife maker. But Dan taught Peter how to work with steel and metal in front of a forge. He also taught Peter how to use the anvil. Subsequently, the Sobral family took Peter under their wings. He traveled to Argentina to learn some of their family secrets. From that point on, he studied under the likes of Adam DesRosiers, Jason Knight, and Samuel Lurquin.

In both the interviews with Amber and Josh at his shop, and at BLADE 2019, Peter raved about the Dark Timber Brotherhood. This is a tight-knit group of knife enthusiasts, and some who enjoyed Peter’s knives started it all. Although the group began mostly as customers, after continuous growth, Kohler saw the potential for philanthropy. The group stems from a common love of knives, but comes together to support one another, and their communities.

Peter believes in customer and community loyalty, which is why he closed his books. This means that he currently releases/sells knives to people who already own one of his blades. His current customers consume most of his time in regard to production. But on occasion, Peter releases a knife on the Dark Timber Brotherhood Facebook Page.

The closest you can get to a Dark Timber Custom Knife (DTCK) is to purchase one of his mid-tech knives. He pushes around 1,000 each year, and oversees the production process and is hands-on with the finishing. Blades such as the 1911 Commander  and the OG Grizzly are some of the best fixed blade knives Peter’s made this way.