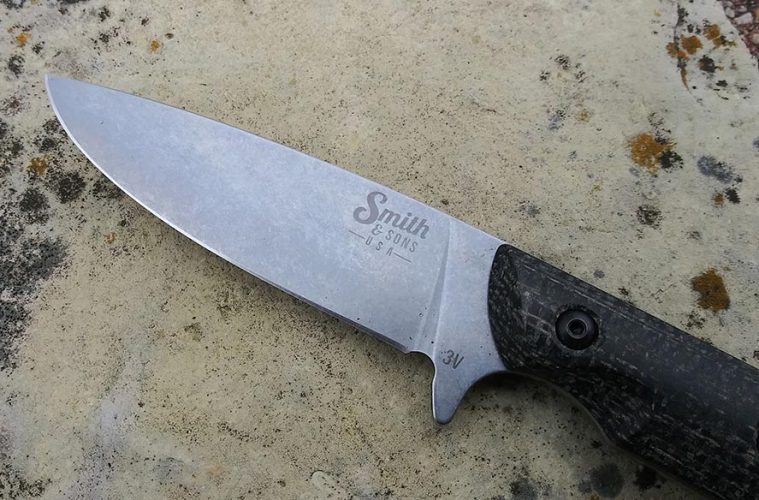 The Comanche from Smith & Sons Knives

SMITH & SONS KNOCKS IT OUT OF THE PARK WITH THE COMANCHE

There’s something to be said for a small fixed-blade knife. For most people, it’ll see far more use than a larger knife, given the ease of carry if nothing else. I mean, if we’re being honest, there’s little need for a Crocodile Dundee Bowie knife when it comes to breaking down boxes or cutting up sausage and fruit for lunch, right?

The Comanche from Smith & Sons Knives fills the EDC role quite nicely. Whether you’re processing game or cutting cordage in the garage, it’ll handle the job with ease without being a boat anchor on your hip all day long.

WHAT’S IN THE BOX?

We need to start by talking about the packaging. While a fancy box is no guarantee regarding the quality of the knife inside, I do appreciate a company  or knifemaker who goes the extra mile and provides something more than the standard white cardboard box.

In the case of Smith & Sons, the box is black and has some great artwork, sort of an old-timey font advertising the company. The bottom of the box has some information about Smith & Sons, chiefly that this is a family-owned and operated endeavor that grew from a hobby to a business.

But, does the knife warrant the fancy box? Let’s take a closer look.

The Comanche is available in four different handle materials: 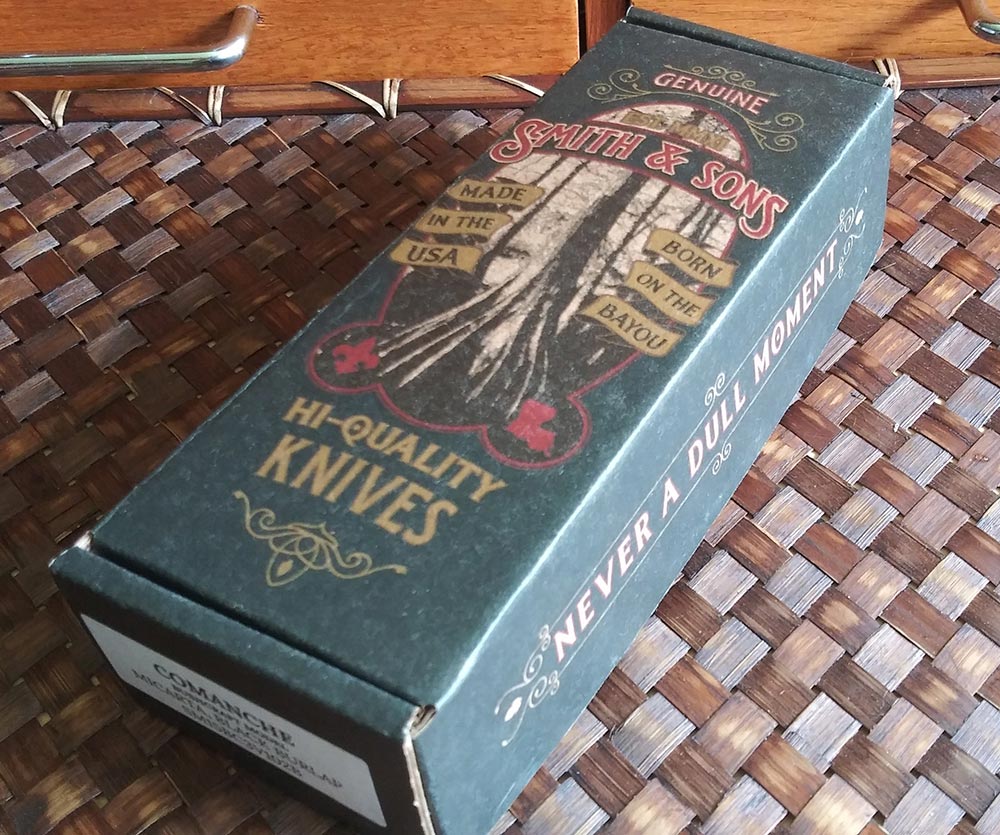 I chose Black Burlap for mine, primarily because I didn’t have a knife with that handle material yet, but also because it is quite handsome.

In taking the knife from the box and removing the cardboard sleeve from the blade, the first thing I noticed was the sharpness of the edge. The Comanche is easily one of the very sharpest knives right out of the box that I’ve ever had. With some knives, they have a good edge, but you’re compelled to touch them up a bit on a strop before you put them to any real use. There’s no way I could improve on the Comanche’s factory edge.

The handle is, as noted, Black Burlap Micarta. It has just enough texture for some grip traction, though it is smoother than its appearance would suggest. While the scales are rounded from top to bottom, the only real contouring is just behind the guard to provide an indexing groove. It is present on both sides of the knife, making it ambidextrous. 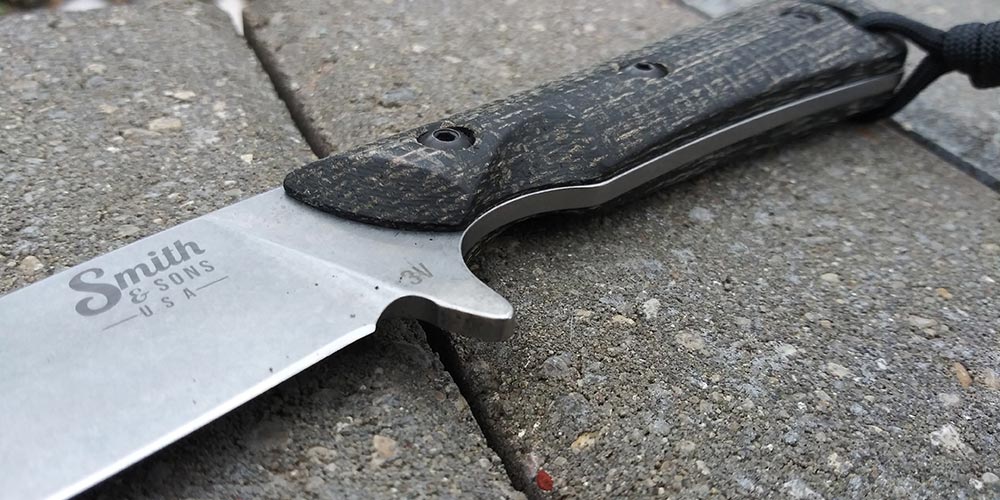 The integral guard works well to keep fingers away from the blade’s edge without being uncomfortable.

There is a lanyard slot at the base of the handle, and the Comanche comes with a paracord lanyard attached to it. It is more decorative than functional, but still, it is a nice touch. More on this lanyard setup in a bit.

An integral guard keeps fingers from sliding up from the handle to the sharp edge. There’s no jimping on the spine. From end to end, the back of the knife has a slight curve, which serves to increase cutting power.

The knife is made of 3V steel and has been given a stonewashed finish. Personally, I’m not big on mirror-polished knives and much prefer a stonewashed or satin finish.

I asked Alex Smith of Smith & Sons about the design scheme of the Comanche.

The back of the box provides some information about the Smith family and their knife company.

“The Comanche was initially designed as the logical next step for our bushcraft line after the runaway success of our Brave model,” he said. “While the Brave remains as popular as ever, some of our customers suggested we push the design even further with added handle length, unobtrusive finger protection, a robust multi-carry leather sheath, and the same focus on simplicity and utility. A comprehensive design and prototyping process ensued, and when we were satisfied, the Comanche was born!”

That brings us to the sheath. Two sheath options are available. There is a fairly standard vertical-carry, pouch-style sheath. Or, you can go with what they’re calling the Adventure Carry sheath, which is the option I chose.

It comes configured with a dangler. Or, you can forgo the dangler, and the sheath can be strapped to the belt either vertically or horizontally. There’s a small loop for a ferrocerium rod up to 3/8 inch in diameter, which is always a nice feature.

The knife is secured in the sheath by a wide strap with a snap in it. At the bottom of the sheath is a lanyard hole, and it comes with a long paracord lanyard attached to it. 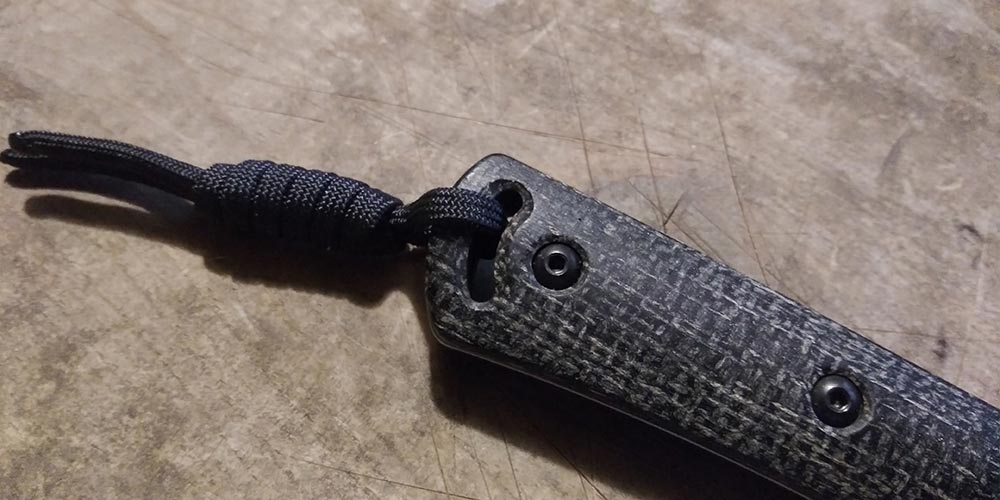 The Comanche comes with a lanyard attached to the knife, though if it were on an extended tang, it might be a bit more comfortable.

BUT HOW DOES IT PERFORM?

I’ve had the Comanche for a couple of months now and have carried it on some hikes as well as around the house when working inside and out. The first thing I noticed was that the sheath carries a bit differently than others, at least as far as the dangler is concerned.

With other dangler-type sheaths I’ve used, the knife handle rests about where the dangler attaches to the sheath, so it ends up with the top of the knife resting on the upper thigh.

With this Adventure Carry sheath, the knife handle is nearly even with the top of the dangler. In other words, with the dangler, it carries nearly identical to how it would with a normal vertical sheath, just a bit more flexible for when you’re moving around or driving. This isn’t a bad thing at all, as far as I’m concerned.

“Whether you’re processing game or cutting cordage in the garage, it’ll handle the job with ease without being a boat anchor on Your hip all day long.”

However, if you have fantasies of tying the bottom of the sheath to your leg, à la some sort of Old West gunslinger, think again. Unless you have an especially short pelvis, doing so will probably be more than a bit uncomfortable. 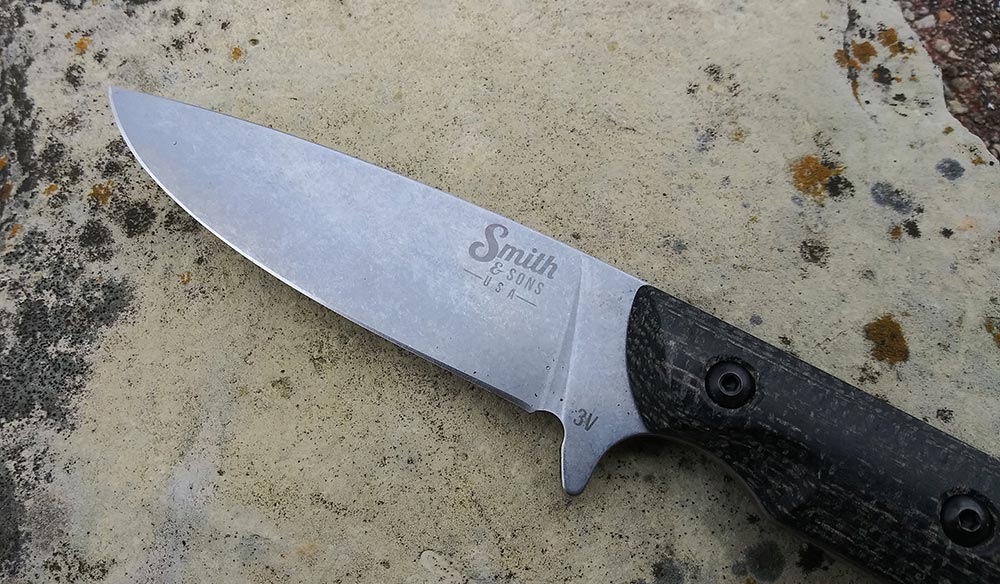 The Comanche has a drop-point blade profile and a stonewashed finish.

The knife itself has great ergonomics. It is comfortable in hand, and I didn’t experience any hot spots or other discomfort when using the knife for a variety of chores. I have large hands and the handle has just enough real estate for a four-finger grip.

However, if I had my druthers, I’d have put the lanyard attachment point on an exposed tang. With the current design, I found that the lanyard rubbed against my hand, no matter where I put the lanyard loop. I’m not overly fond of lanyards on my knives anyway, so this isn’t a deal breaker for me.

I liked that the point of the knife is sharp, but not a needle point. This gave it some strength when used for boring holes, without my fearing the tip would end up bent or otherwise damaged. 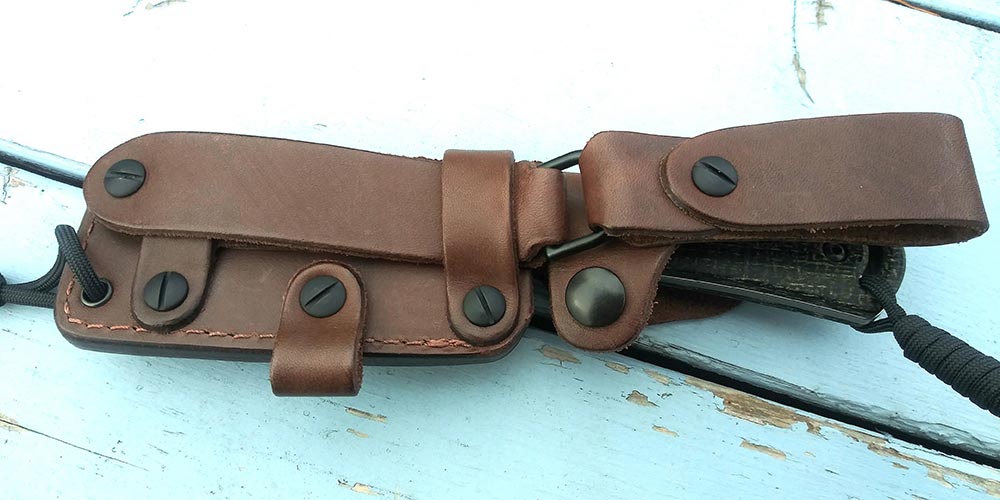 The Adventure Carry sheath can be used in a variety of configurations.

The only strike against the Comanche, from where I’m standing, is the placement of the lanyard attachment. But this is a very minor quibble and in the grand scheme of things is hardly worth mentioning.

In my experience with the Comanche, Smith & Sons is definitely doing something right as I didn’t have any problems with rust, pitting, or other issues. It also held an amazing edge throughout the entire evaluation period. I love that the company is a family-run business providing a great product made in the United States. 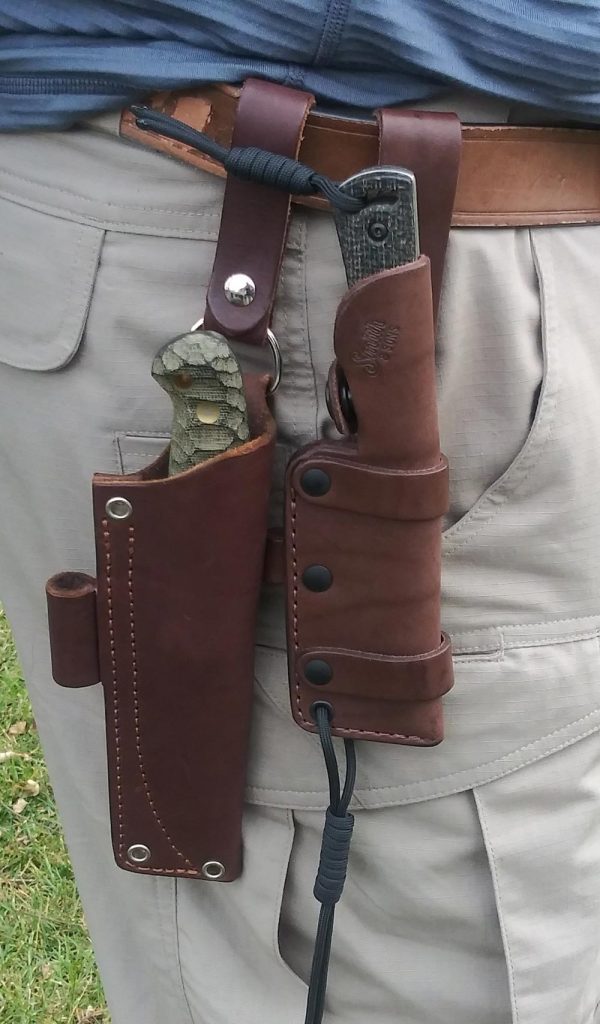 Here’s the difference in dangler lengths. The LT Wright GNS on the left carries much lower than the Comanche on the right. 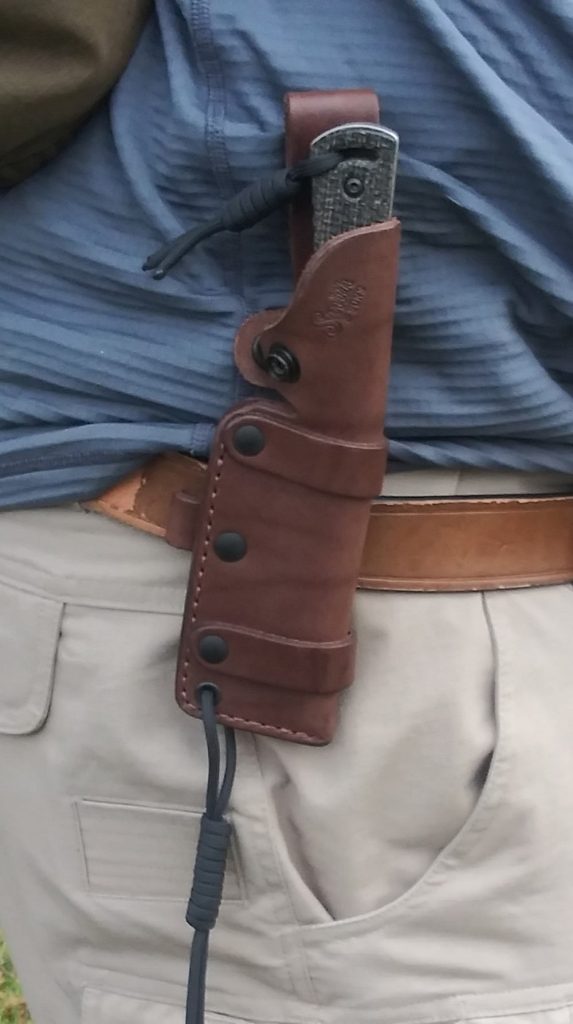 Here, the Comanche sheath is threaded on the belt, which causes the knife to ride fairly high and be easy to conceal under a jacket. 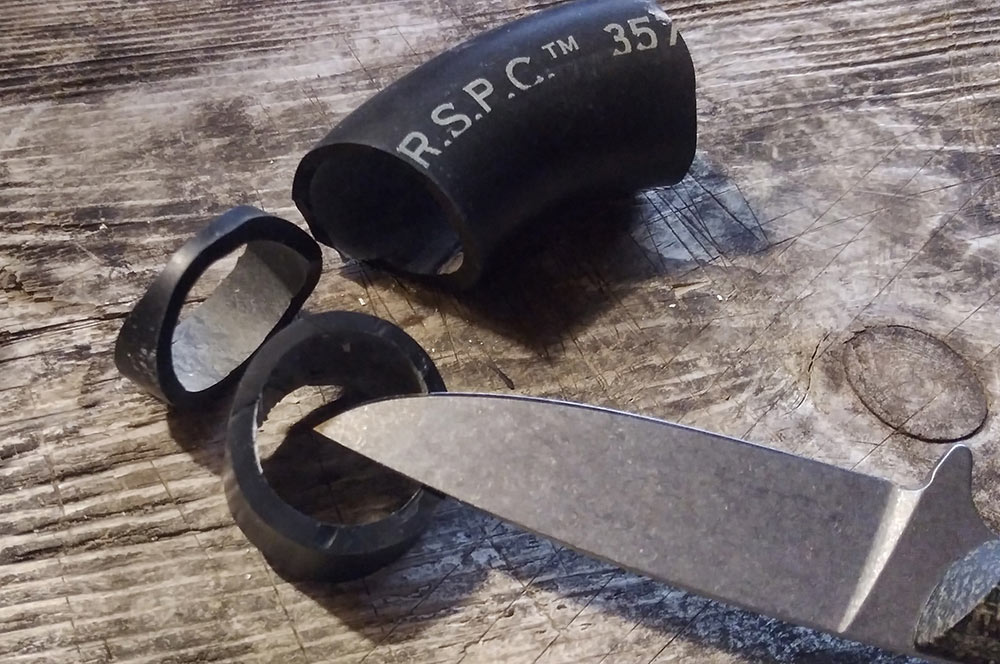 An old rubber hose was hacked up in seconds and without any trouble. 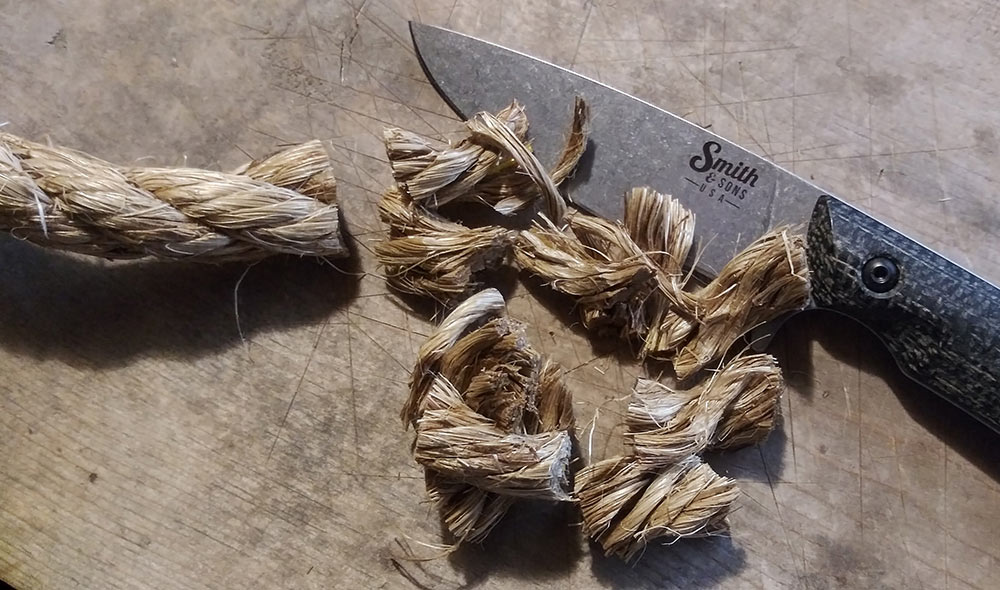 Thick, abrasive rope was no challenge at all for the Comanche.

Smith & Sons was founded in 2011, when it transitioned from being just a fun hobby to a full-time company. From the beginning, its focus has been on providing knives that blend form and function, with a commitment to superior fit and finish, excellent craftsmanship, and attention to detail.

One of the things I appreciate the most about this company’s philosophy is that the people there recognize that a knife, while an incredibly important asset, has its limitations.

As stated on the website, “Smith & Sons Knives are not intended for use as a screwdriver, pry-bar, chisel, punch, hammer, or weapon. There are plenty of other tools out there that perform these tasks better than knives do!”

The Comanche in 3V is exclusive to DLT Trading. It cannot be purchased elsewhere. I asked Smith & Sons how this collaboration came about and Alex Smith shared this:

“Our collaboration with DLT Trading was definitely a case of things falling into place at just the right moment. The Comanche had not been produced for nearly two years after our shop was destroyed in 2020 during Hurricane Laura.

In the meantime, we had taken on DLT as a new dealer. While in discussions with DLT on what we might be able to produce to satisfy their needs, we discovered that their customers have a particular love for CPM-3V, especially in the case of fixed blades in the size range of the Comanche. We proposed producing it as an exclusive and they were happy to oblige.”

You can find the Comanche at DLTTrading.com.

A version of this article first appeared in the March/April 2023 print issue of Knives Illustrated Buyer’s Guide.