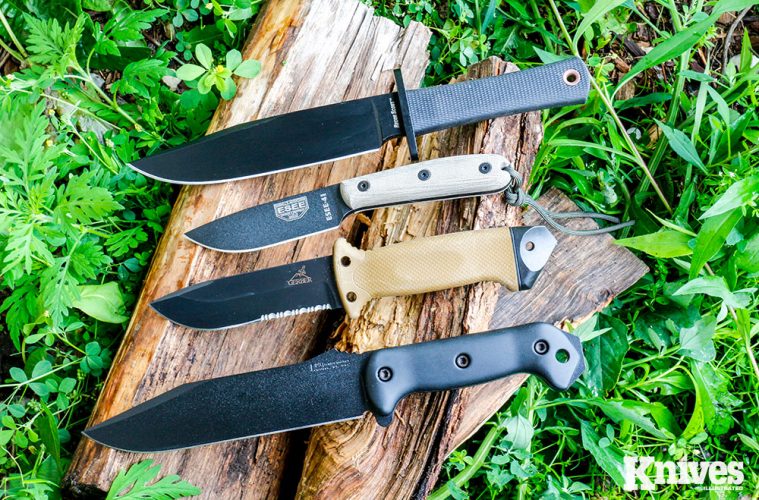 A survival knife could be a multitasking marvel

Yes, everyone’s heard it: A knife is probably the best item to have during an emergency situation. But does everyone truly know why this is?

It’s easy to assume, even for the layman, that a sharp blade will come in handy for a plethora of cutting chores during a human-caused or natural emergency. For cutting vehicle seat belts, cutting cordage, or cutting through fabric for tourniquets and bandages, a knife, if of good quality, will perform these tasks well. 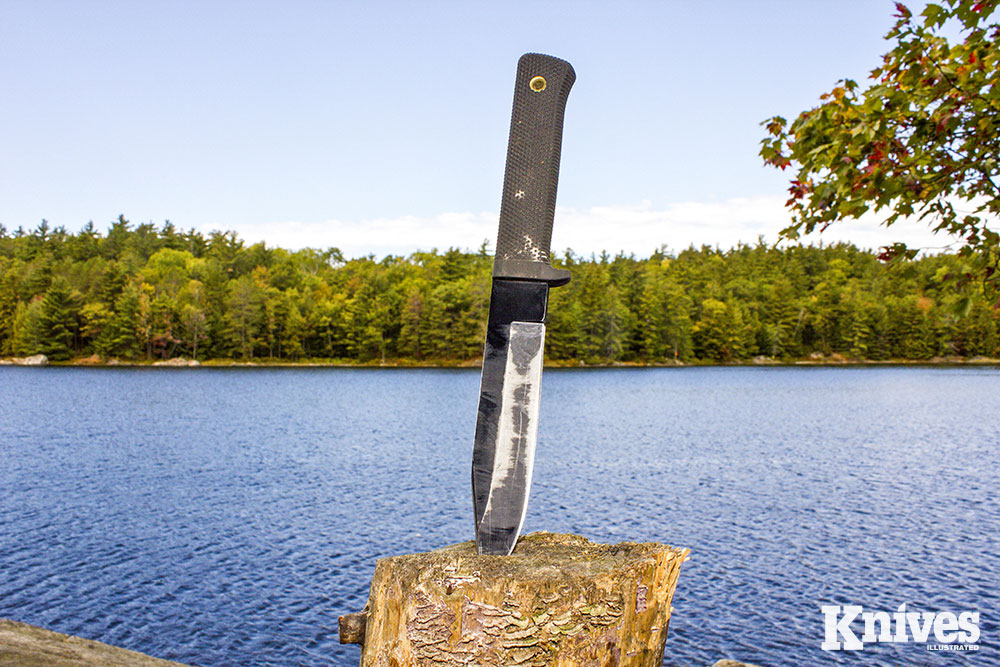 When you’re on your own, a sturdy knife can be useful and comforting in many ways. Stewart Hyman/Dreamstime.com photo.

However, the cutting aspect of the knife’s usefulness is only scratching the surface of its overall benefits. There are numerous ways a survival knife can help you to endure what looks like a no-win situation.

What’s amazing about a survival knife’s resourcefulness is that it “participates” in aiding a person through at least three, if not four, of the Core Four survival categories: fire, water, food, and shelter. These four groups are the priorities in most scenarios that need to be addressed when an emergency situation occurs, and a survival knife can help to make things go a bit easier when tackling each category.

“…a survival knife’s resourcefulness is that it ‘participates’ in…at least three, if not four, of the Core Four survival categories: fire, water, food, and shelter.”

Fire is one of the Core Four and in itself can aid in a plethora of sub-categories of survival, including staying warm, cooking raw meat, signaling for help, etc. But a fire doesn’t start on its own, especially if you lack simple fire-starting items such as matches or a disposable lighter. This is where a knife can lend a hand. 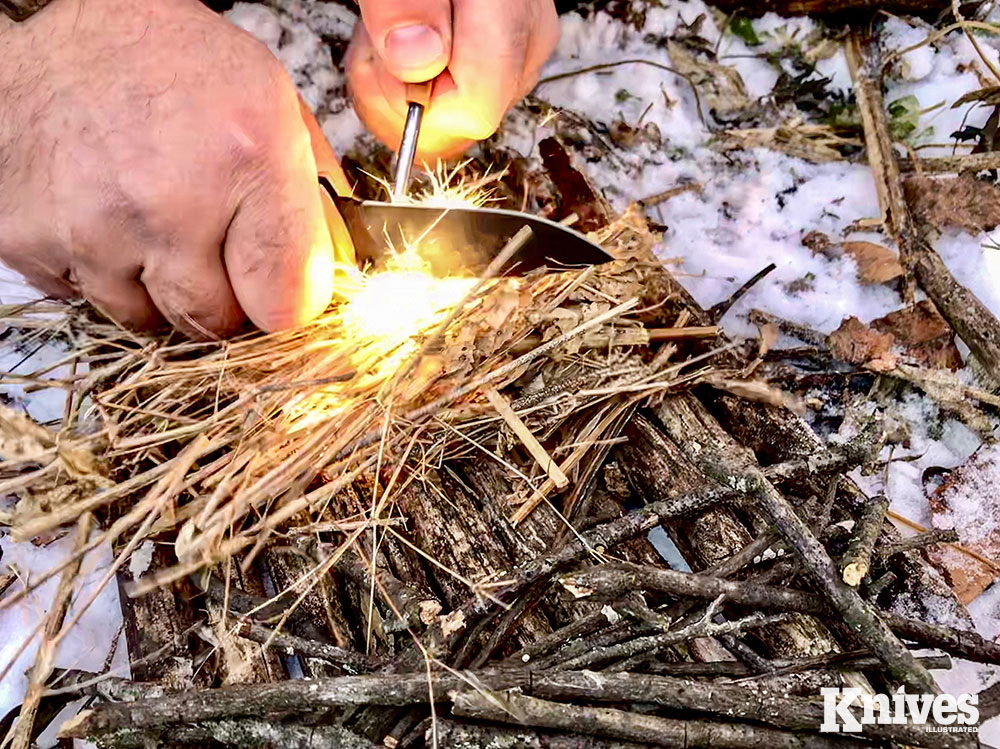 Using a knife to strike sparks with a ferro rod is just one way a knife can help you to make fire. Diamantonix/Dreamstime.com photo.

First, you need the raw material to act as a starter and fuel. A survival knife with its large, sharp blade can first shave wood from a log or branch and create usable tinder. Then it can take that same log and split it multiple times for kindling.

Third, the knife itself can aid in creating a spark by acting as a striker to a ferrocerium rod or magnesium bar, if available. Additionally, to aid in creating fire easier in the near future, the knife can chip away at the thick bark on pines and other resin-filled trees and allow you to capture this flammable substance to make your tinder burn longer and larger.

A survival knife also directly and indirectly aids in the food category, another of the Core Four essential of survival. First, it can help with obtaining the raw, or should I say, living, product. Most survival knives (I say most because there are a few top heavy versions with a wide tip that may not work) can be easily attached to a staff (cut down with your knife, of course) and used as a spear for both hunting and fishing. 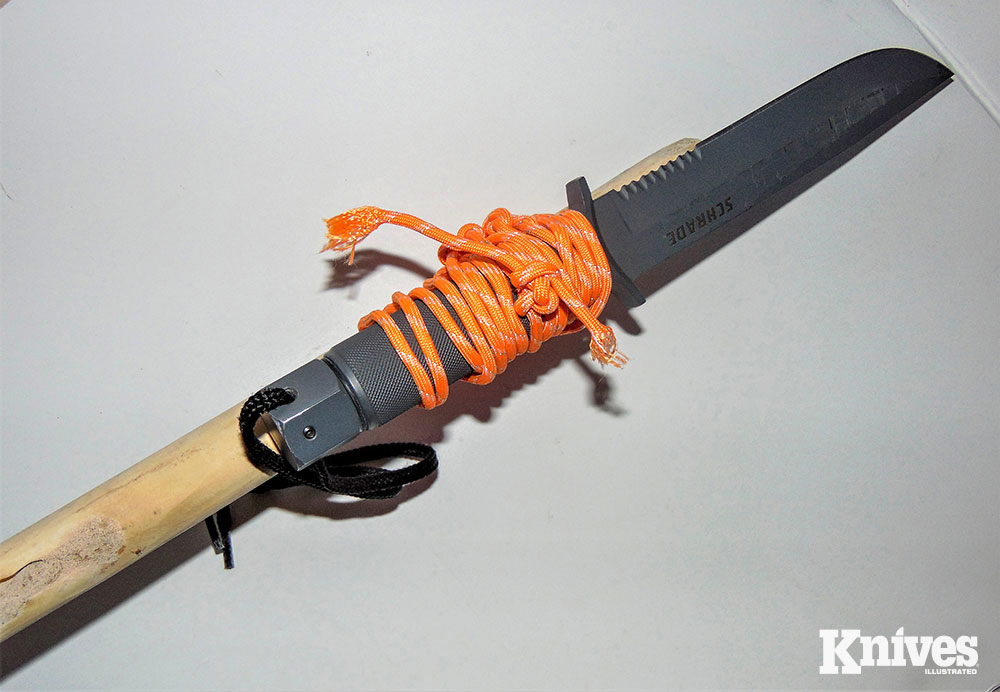 A knife attached to a sapling or a stick can make a great spear for both food gathering and personal defense. Author photo.

Once secured and dispatched, the knife can then be used on both fish and game to break down the animal into usable pieces, ready to be cooked. Afterward, the knife, naturally, can take up the job of utensil and aid you in cutting your cooked food sitting deliciously on your plate.

Once you’ve secured food, a good knife can help you to prepare it for consumption. Danielrequenalambert/Dreamstime.com photo.

Meat and fish aside, food comes in other forms out in the wild, such as edible plants, fungi, and wild berries. A knife in hand is a quick and efficient way to collect these tasty treats without having to pull, tear or rip roots, tough, fibrous vines or thorn covered stems.

Depending upon the type of shelter you choose to create, a survival knife can aid in its construction in a variety of ways. First, if you choose to build from scratch then a knife is not only a necessity, but a virtual lifesaver. Thin, but sturdy saplings can fall under a durable, large blade, and you’ll need a lot of these to create a shelter from the ground up. 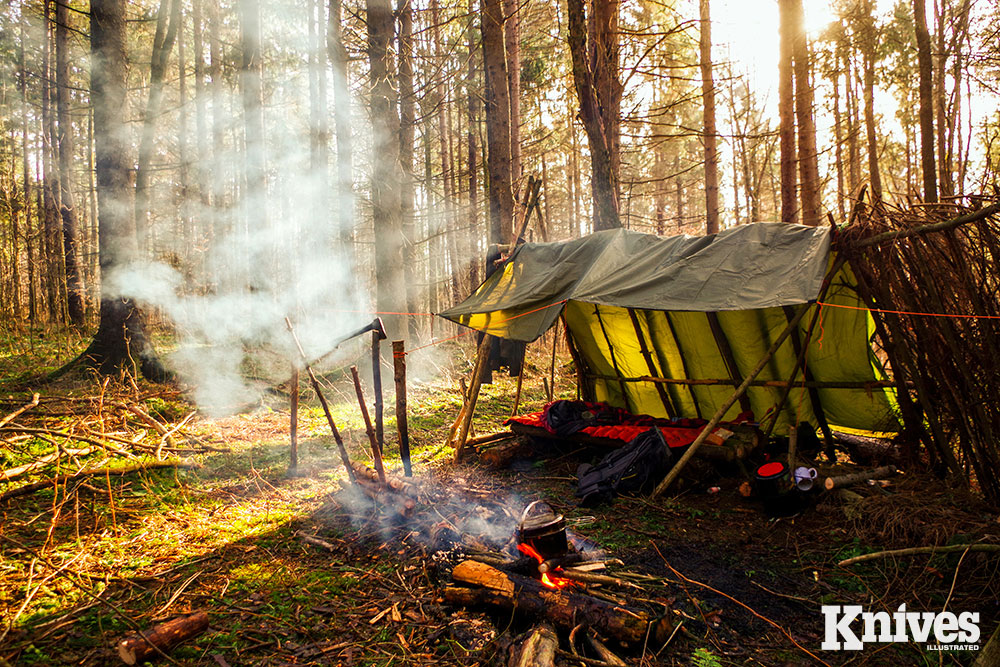 Shelter building is a much easier job when you have a good knife available. James Mahan/Dreamstime.com photo.

The knife can not only hack through these tender thin trees, but with one swing of your arm you can shave off the small branches and clusters of leaves. Tying your structure together will require vines or thin but strong roots. Your knife gets the job done quickly to get the cordage needed. Need to clear some branches around the shelter site you’ve selected? Your knife can help with that too.

Finally, a knife can be used to fashion stakes and to pound stakes them into the ground. A knife stuck deeply into the ground or wedged within the “Y” of a tree branch can add stability to your shelter through a windy night.

FROM TOOL TO WEAPON

A knife also can be a valuable weapon in a number of unpredictable situations. A knife on its own or attached to a stick to create a spear can help to fend off curious or dangerous animals that invade your camp.

As the “pointy” part of your spear, the survival knife will be able to keep animals such as bears, coyotes, wolves, snakes, and other predators at a safe distance and either deter them from advancing towards you or if needed, allow you to strike to inflict debilitating damage to keep them from harming you. 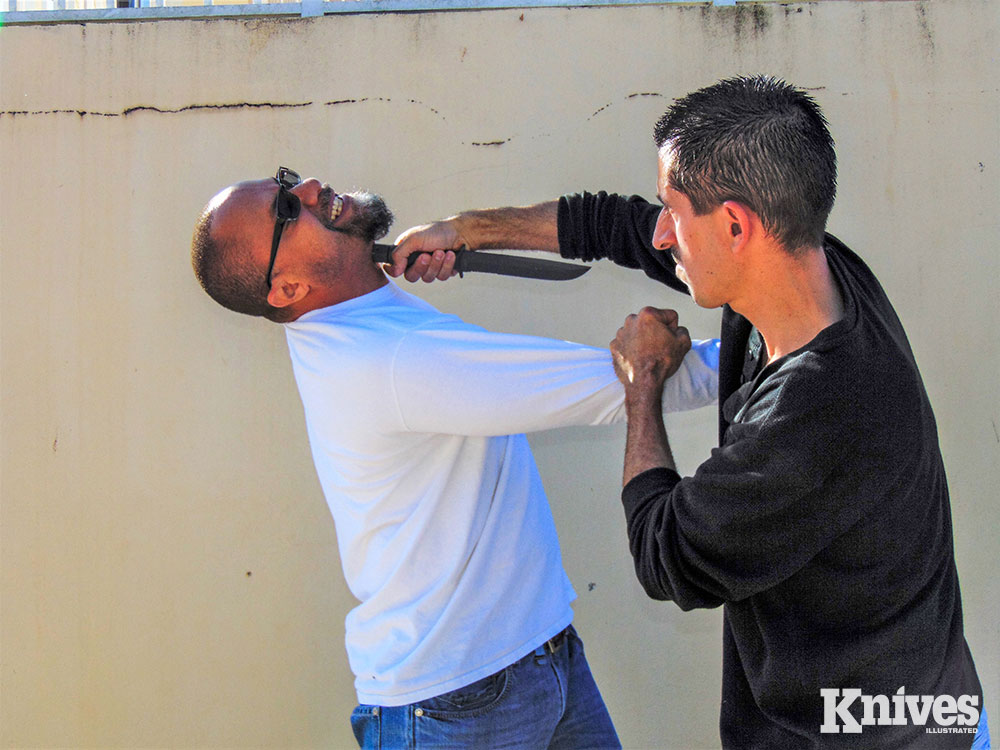 A survival knife can aid in your own personal survival if you are attacked by someone out to do you harm. Author photo.

Four-legged animals are not the only ones that may be out to harm you, your friends, or your family. People can turn on each other during a survival or emergency situation. All bets are off when food is scarce, water is a luxury, or a dry shelter beats staying out in the rain, heat, or snow. If you have something other people need to survive, then most likely they will go to all means to get it and that’s where your trusty sharp blade comes into play.

While the selection of a survival knife ultimately comes down to personal choice, there are some basic parameters to be considered.

First, the knife should be a fixed blade knife with a healthy amount of tang within its design. A broken knife is an almost useless knife, so choose one with at least three-quarters tang (full tang is ideal, though) to help withstand it breaking in the field, which would be a disaster in its own right.

“A survival knife…also can be a valuable weapon in a number of unpredictable situations.”

Second, it should be large enough to tackle fairly large projects such as felling small saplings or splitting wood for kindling. Too small and you run the risk of snapping the blade or overworking yourself to power through material not meant for an undersized knife. 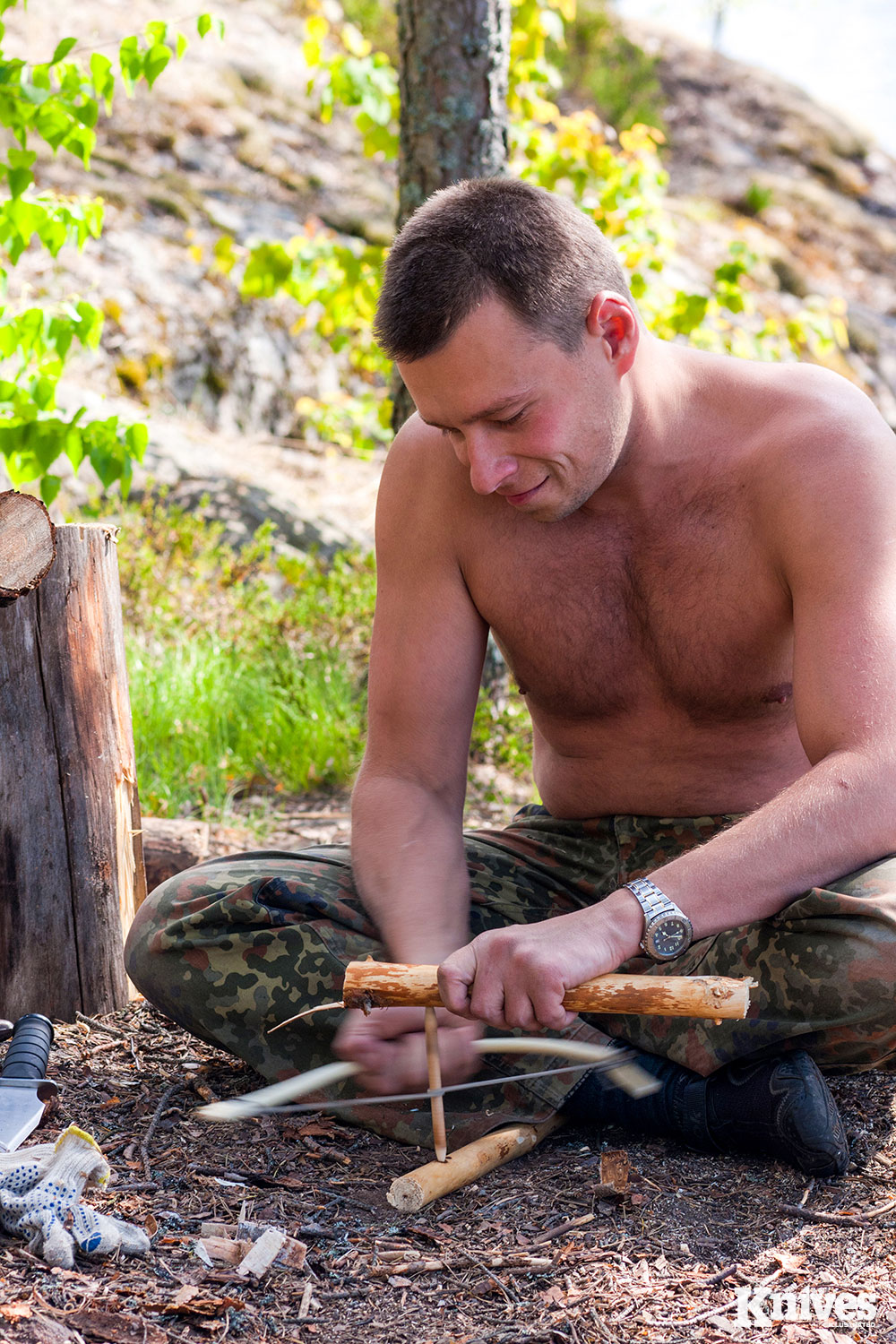 Survival knife will indirectly aid in you having a fire during a cold night, by whittling down the pieces of wood to create a bow drill. Argument/Depositphotos.com photo.

Finally, choose quality over price. Yes, a budget is needed for almost everything, including a knife. But it’s far better to save your money over a longer period of time and purchase a quality knife that will last through the year, the next five years, and even over a decade or more. Going cheap will only cause you problems when you least expect them. Buy smart today, and you won’t have to buy until far into the future, if even then.

NOT JUST ANY KNIFE WILL DO

Here are some general traits to look for when choosing your first survival knife:

YOU STILL HAVE OPTIONS WITHOUT A SURVIVAL KNIFE

Lost your number one survival tool? No problem, these alternatives take up the slack in a pinch: