Benchmade and Cold Steel Knives Are Put To the Test – Results

Be sure to take a look at the first part of this series for full details on the testing setup.

Benchmade sent two models that were radically different. The first was the 9051SBK, an aluminum frame auto in their Black Class that sported a new push-button lock reputed to be 30 percent stronger than traditional locks. The second was the 950 Rift, a slim G-10-handled knife with their traditional AXIS lock. 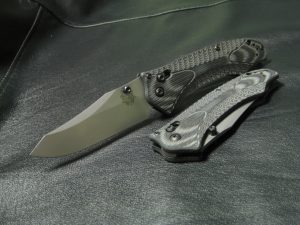 Cold Steel sent three knives for testing. The first was the G-10-handled AK-47 with its Ultra Lock; the second was the Black Rock Hunter, featuring a split handle that worked like two opposing slip joints; last was their inexpensive folding Bushman, a steel-handled folder with an ultra-heavy locking mechanism.

The Cold Steel folding Bushman was the biggest knife, and we threw on this knife first. The weight dropped and raised the knife in the blink of an eye. It was all over almost before it started. The ruthless contraption shook and and swayed under the shock of a free-falling 50-pound chunk of steel being arrested in flight by the folding Bushman’s lock—amazing! The knife was so rigid that the weight actually bounced twice, letting the spine hit twice more. The knife just shrugged it off and asked for more. 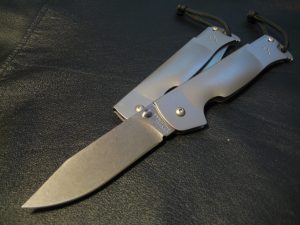 But wait, there’s more. We marked the blade at 3 inches from the spine, and put the handle into the fixture while the blade lifted 175 pounds of steel. The knife didn’t disappoint on the second test; there were no problems whatsoever. Obviously, Cold Steel knew what they were doing with this heavy-duty lock and the stainless molded handle.

Next up was the Benchmade 9051. In the blink of an eye, the test was over, but the results were drastically different. It took a few minutes after picking up the pieces and reviewing the video footage to figure out what had happened. The lock did its job but, unfortunately, the blade did not hold up to the shock; it left the knife at high speed after it broke around the pivot, leaving a small portion still held in place by the lock. 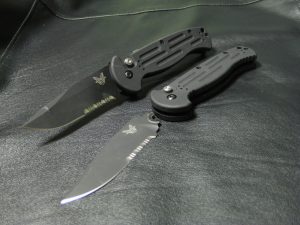 Whether this was a defect in the steel, or due to the massive shock it took, I cannot say. There was a second knife, but it would be needed for the next test. While this one is a tough call, I have to call this a pass, since the lock came through with flying colors. Had my fingers been there, it would have been disconcerting, but I doubt my fingers would be gone. The knife absorbed a lot of shock for the blade to simply part company with the knife. The lock, however, was perfect.

Using the second knife, the 175-pound weight was once again lifted without a problem. Kudos to an incredibly tough lock that is easy to use.

Cold Steel’s AK-47 clanged against the stop, leaving the machine swaying and shaking. After everything settled down, there stood the knife that could, holding the weight high in the air. Grabbing the other knife and clamping it, I lifted the 175-pound weight. This knife did everything it claimed to. 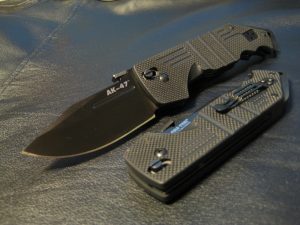 Seeing the way these knives were holding up made for some anticipation as we clamped the Black Rock Hunter into place. This knife had the lightest-seeming lock out of the group. Looking at the unusual design, it seemed to be anyone’s guess as to how it would do. The ruthless spine whack took its toll on the knife. The top pivot sheared, letting the blade rotate down toward the handle. It was a bit saddening, because hopes were high for this knife.

After calling Cold Steel and describing the problem, it turns out things are not so bad. This was something they had caught on to before my call, and was the reason there was a small change to their next run. Apparently, the pivots are being changed to give them added strength. 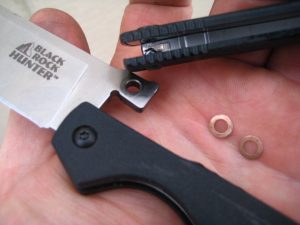 Using the second knife for the static load was disappointing as well. Just as nearly all the tension was on the knife, once again, the top pivot broke. It was a bit anticlimactic because seemed as if the knife was really going to pass this test, even with the weaker pivot of this model. Such is life, however, and it leaves me looking forward to seeing the revised model.

The last knife for this test was Benchmade’s 950 Rift. After seeing the machine wreak its havoc on the other models, it was interesting to see how this slim little knife would fare. It passed the spine whack.. This handy little knife took the blow, absorbing the force and keeping the blade open. Mounting the second knife showed the same performance in the static load test. This underdog passed both tests, despite its unassuming looks and trim profile.

Ten knives were subjected to abuse beyond anything they would encounter in any normal lifetime. The testing taught me that modern locks are much stronger than we might give them credit for. Benchmade and Cold Steel were willing to stand behind their designs and offer them for this test to the point of breakage and beyond. 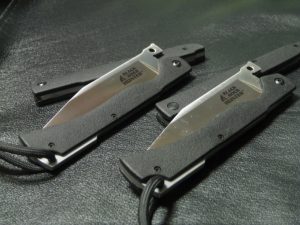 As they continually make small changes and improvements, we can only expect even better products that continue to raise the bar. So, the next time your criteria includes toughness in a small package, don’t overlook the over-performing folders from these manufacturers.

This article was originally published on May 17, 2016.