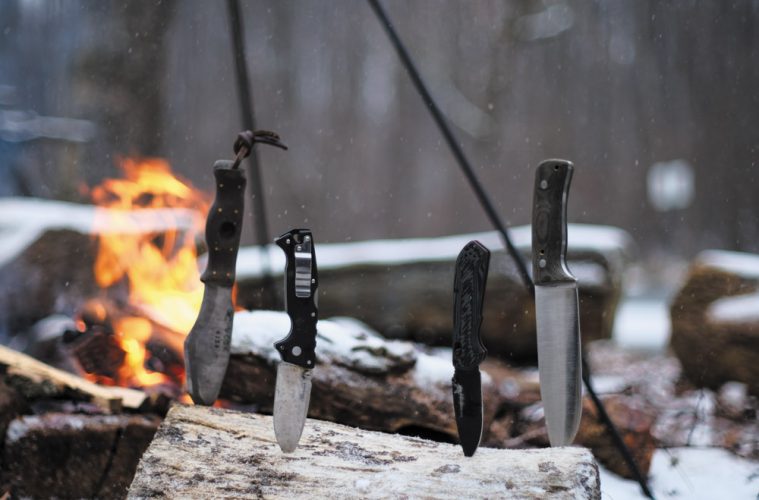 When you think “hard-use knife,” a fixed blade may be the first thing that springs to mind. But don’t forget two trusty hard-use folders that are available: the Cold Steel AD-10 and the Benchmade 560-1 Freek.

“Fantasy” survival situations like a zombie apocalypse or foreign invaders parachuting into your hometown are unlikely to occur. But traffic accidents, natural disasters, and other unfortunate occasions are all too prevalent. Carrying a knife able to cope with extreme situations may mean the difference between life or death.

For most of us, carrying a fixed-blade survival knife on our person at all times is impractical, and it may well be illegal. Putting a fixed blade knife in a vehicle or bag is a great option, but if your knife is not attached to you when you need it the most, it may be inaccessible when you need it most. That high-speed, low drag rescue tool you keep in your truck might as well be back at home if you’re unable to reach it, even if it’s only inches away. 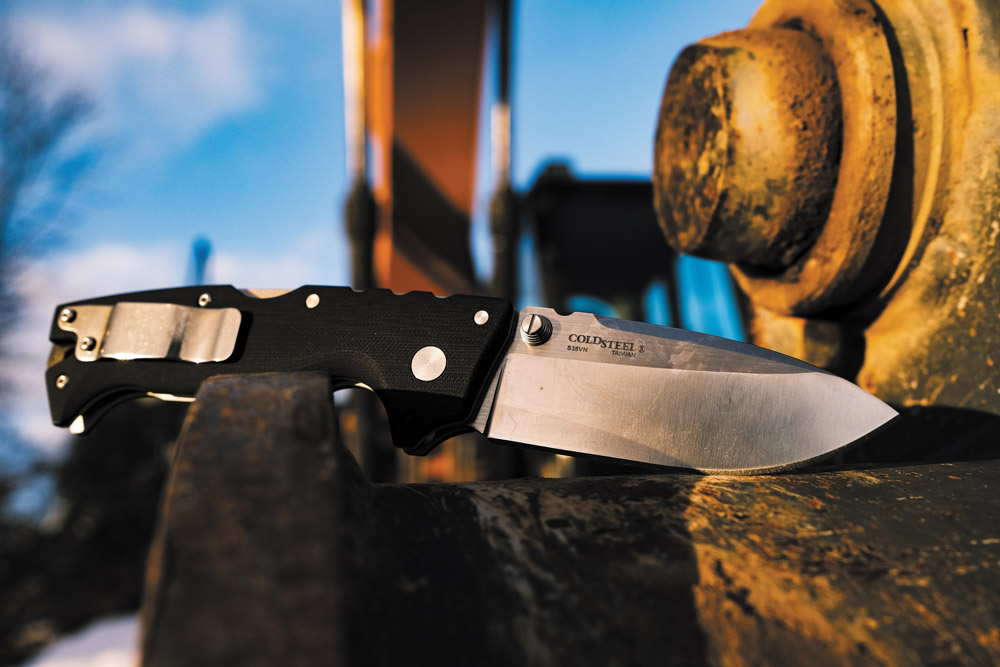 The Cold Steel AD-10 is built like a piece of hardcore construction equipment.

When I approached Cold Steel and Benchmade about writing an article on hard-use folders, they were both eager to take part. My parameters were simple; I wanted a folding knife that was unobtrusive, easy to carry in a pocket, and capable of extreme feats of strength and durability. The knife had to push the limits of what one could reasonably expect from a folder. The knife must be made using state-of-the-art materials and manufacturing methods. My last requirement was a reasonable price.

Andrew Demko, an accomplished custom knife smith, is one of the lead designers for Cold Steel. The AD-10 is one of his flagship designs. He built it to serve as an ergonomic, hard-use folder that can take some serious abuse, yet still fit comfortably in a pocket.

To make his design more accessible to the public, Andrew licensed it to Cold Steel. By leveraging their state-of-the-art manufacturing capability and using premium materials, Cold Steel has made an AD-10 that everyone can afford. My question was: Does that increased affordability compromise the design’s performance?

The first thing I noticed about the AD-10: it’s a big knife! If you’re looking for a discreet-carry folding knife, then look elsewhere. My second observation: it’s very well-made. The 3D sculpted G-10 scales fit perfectly and have no sharp edges. The blade is well-centered and moves smoothly. Lockup felt like a bank vault, and the blade grinds looked even and well-done. 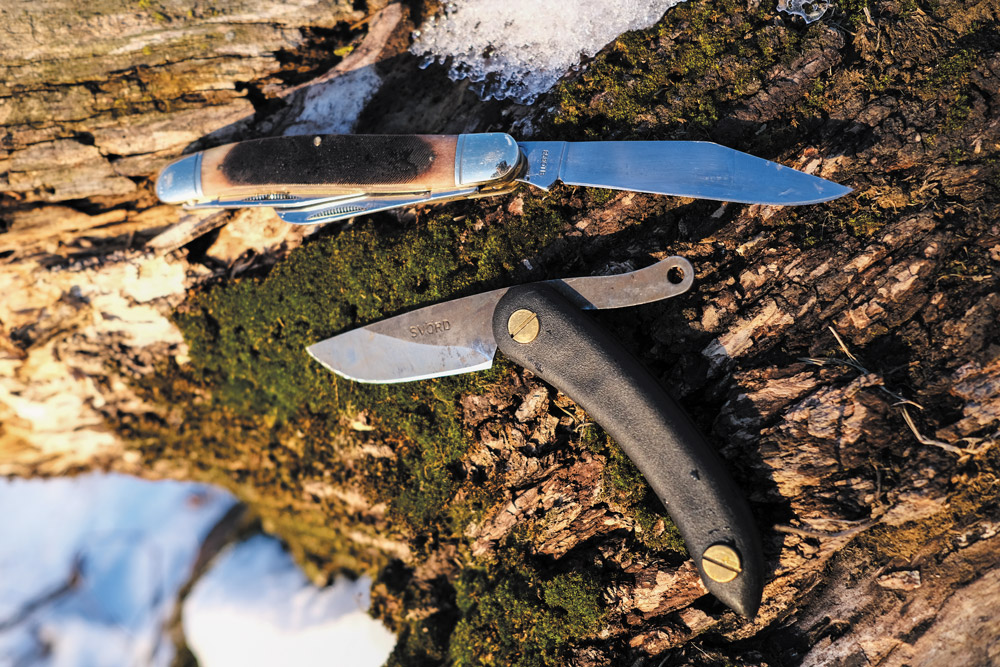 Knives of the past relied on friction, handle design and spring tension to stay open and were never intended for extreme use.

One of Benchmade’s most popular folding knives is the Griptilian. It uses polymer handles with a stainless steel locking insert. The AXIS lock accomplishes lockup, and a variety of different blade steels and grinds are available. The design has stood the test of time and proven itself to be durable and capable.

When designing the original Freek, Benchmade borrowed from the Griptilian design. The polymer and VersaFlex handles were strong and the S30V blade was designed for performance. However, many customers wanted something more. They wanted a knife that had all of the qualities of the Freek/Griptilian, but made with materials that would create a strong, hard-use folder. In response, Benchmade created the 560-1 “super” Freek.

When I first removed the 560-1 from the box, I noticed how light it was. The knife is thin when you compare it to the AD-10. Its 3D-machined G-10 grips are nicely contoured and fit my hand well. Being a longtime user of Benchmade products, I felt instantly familiar and at home with the knife.

The blade is thin with a high saber grind, which gives it excellent cutting geometry. It was well-centered and deployed with that buttery-smooth feel I’ve come to expect from Benchmade. Of course, it came razor sharp.

But how was such a pocketable knife going to hold up to abusive testing? 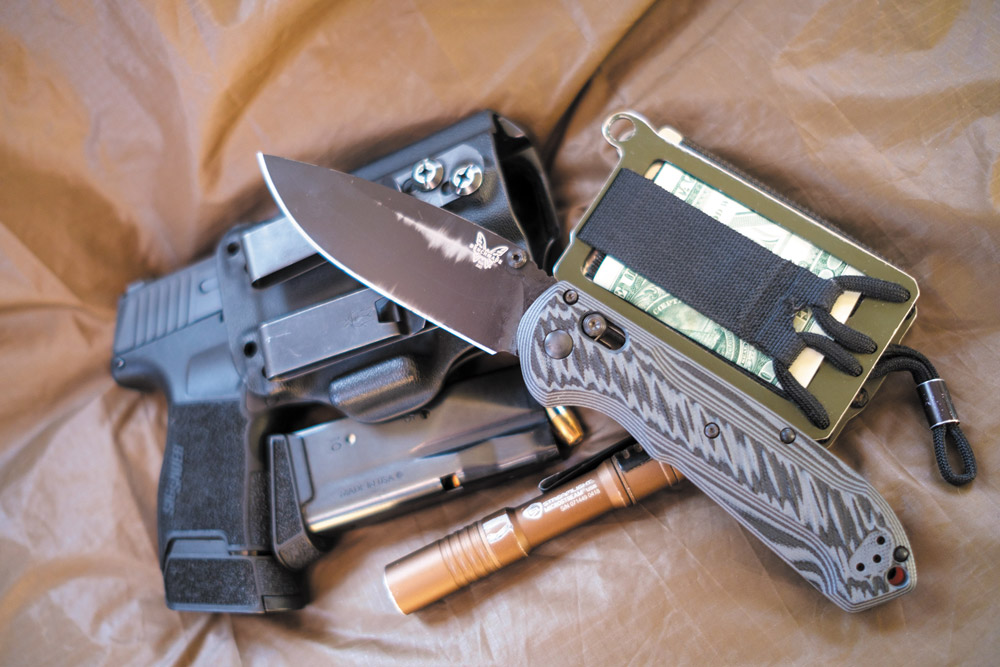 The Benchmade 560-1 Freek is right at home in an everyday carry kit.

Hard-Use Folders Head into the Woods

When I choose a survival knife, one of its primary jobs is fire-making. If it can’t do that, I don’t want it. So I seek out wet conditions. There, you find the most reliable source of dry tinder inside logs and thick branches. To access that wood, a survival knife needs to be able to split the wood into smaller pieces and carve it into feathers that will ignite with a lighter or catch a spark from a ferro rod.

I do not recommend batoning wood with a folding knife. The stresses of this activity can cause serious damage to a folder, and even the most robust locking mechanisms will show wear and degradation over time. With that said, these knives are billed as hard-use folders built to withstand above-average abuse.

When I took the AD-10 to my local woodland playground, the weather was wet and rainy. Everything in the woods was soaked. I gathered as much standing dead wood as I thought I’d need and cut a section of the trunk from a deadfall tree. I made sure to include a section with a knot in it. (Batoning through knots is never recommended, even with a fixed blade knife.)

I’ll cut to the chase: The AD-10 blasted through every piece of wood I put it to. Knots were no match for the knife. Lockup remained rock solid, and I appreciated the extra width and contouring of the grip for the added comfort in hand. The edge remained so hair-popping sharp that it was as easy as can be to create feather sticks.

The AD-10’s grind provides a durable edge. It is thin enough to be an efficient cutter and enhances the knife’s carving ability. At the end of the testing, the only effect on the AD-10 was that the travel of the blade, from closed to open, became smoother and easier. Lockup remained solid and there was no looseness to be found anywhere.

Starting Fires with the 560-1 Freek

The day after the 560-1 Freek arrived, I drove to the testing compound of custom knife smith, Scott Gossman. There, I met with Scott and fellow survival instructor and knife smith, Dwayne Unger. The day was as miserable as they come, presenting us with cold temperatures, snow, sleet and freezing rain. Perfect conditions for survival knife testing!

Because of the Freek’s size and construction, I tempered my choice of wood and avoided pieces with knots and twisted grain. We used the Freek to split a large pile of kindling and a series of feather sticks with which to start a fire. During the entire process, the blade stayed locked open and never threatened to injure our fingers. Very early in the testing, the Freek’s blade developed some vertical play. Despite this, the amount of play in the blade never increased and the lock gave no indication that it would fail.

The Freek excelled at making feathers, carving notches, and breaking down kindling because of its thin grind and excellent ergonomics. The M4 blade stayed razor sharp throughout the testing process and, despite being subjected to a wet environment for an entire day, showed no signs of corrosion. 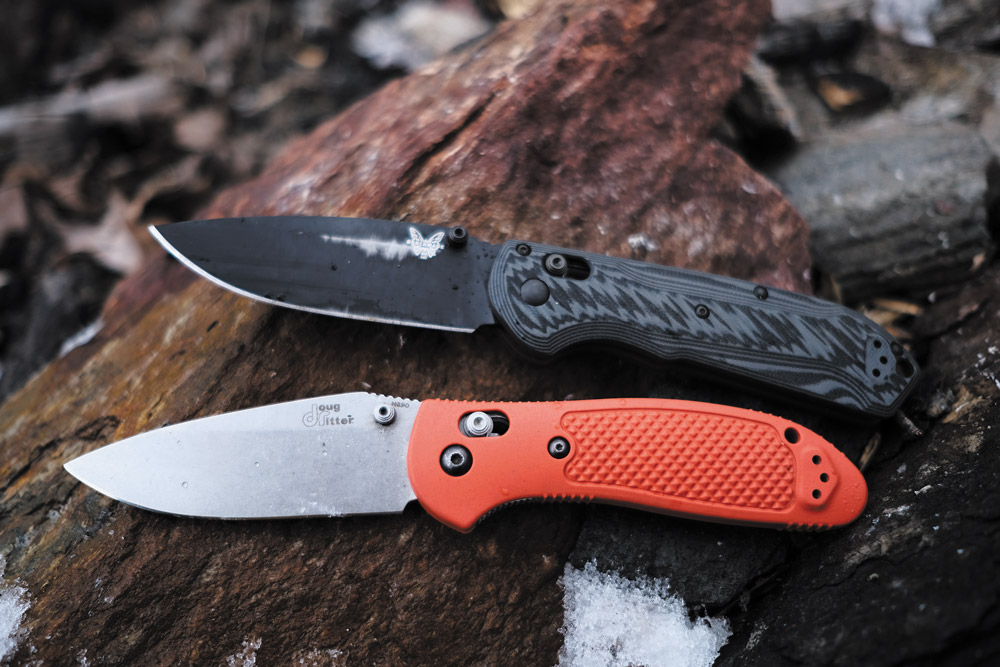 The Freek (top) shares its genetics with the legendary BenchmadeGriptilian (bottom), while taking materials and construction to another level. 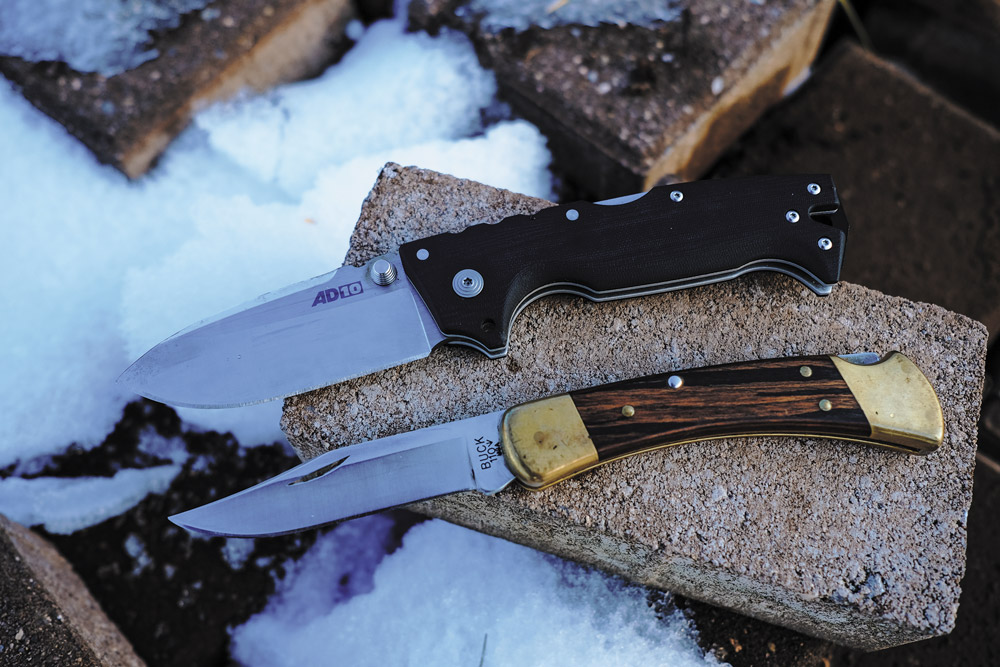 The AD-10 (top) shares some heritage with classic lockback knives like this Buck 110 (bottom). 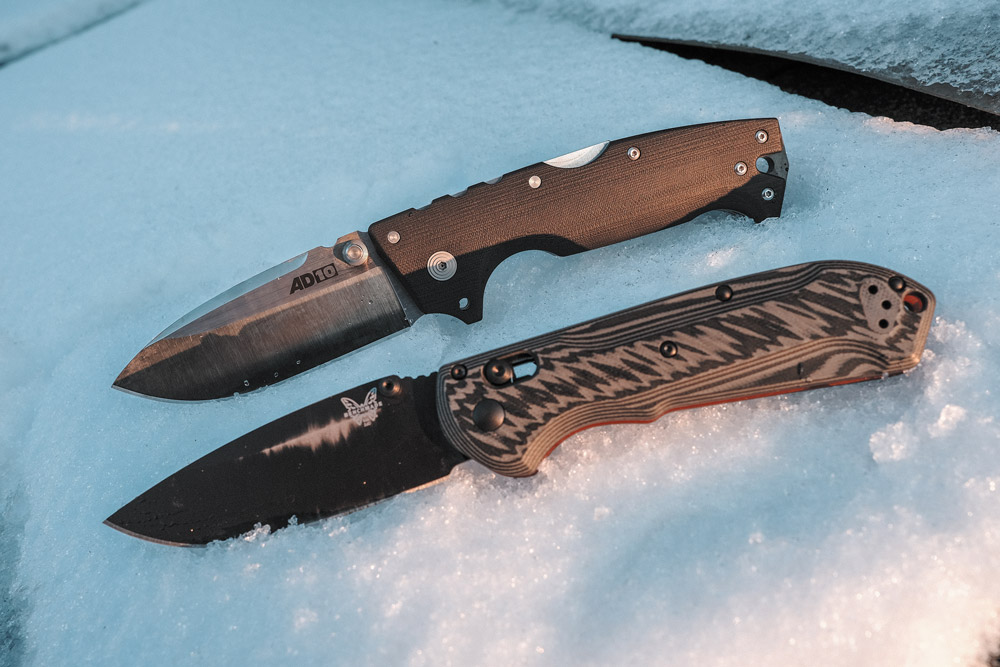 I must say again that subjecting any folding knife to this type of testing is foolish. Reserve splitting and prying wood for fixed blade knives, or even better, for hatchets and axes. I did this testing to push the design parameters of each of these hard-use folders to see what they are capable of in a true emergency situation.

While the Benchmade Freek developed some blade play early on, it didn’t progress through the rest of the day. It performed every task we asked of it and never threatened to fail and cause injury to the user. It is lightweight, ergonomic and very well-suited for everyday carry.

The Cold Steel AD-10 is built like a tank. My testing did not challenge its limitations in any way. This robustness level comes at the cost of size and weight. While it’s possible to EDC the AD-10, it’s heavy, thick and takes up a lot of pocket real estate.

Each blade has its place. If you want the strongest knife you can buy and still carry in a pocket, buy the Cold Steel. If you want a strong, durable knife with a blade that holds its edge for a very long time yet still fits comfortably in a pair of running shorts, buy the Benchmade. Either way, you’ll have a hard-use folder that won’t let you down when the going gets tough. 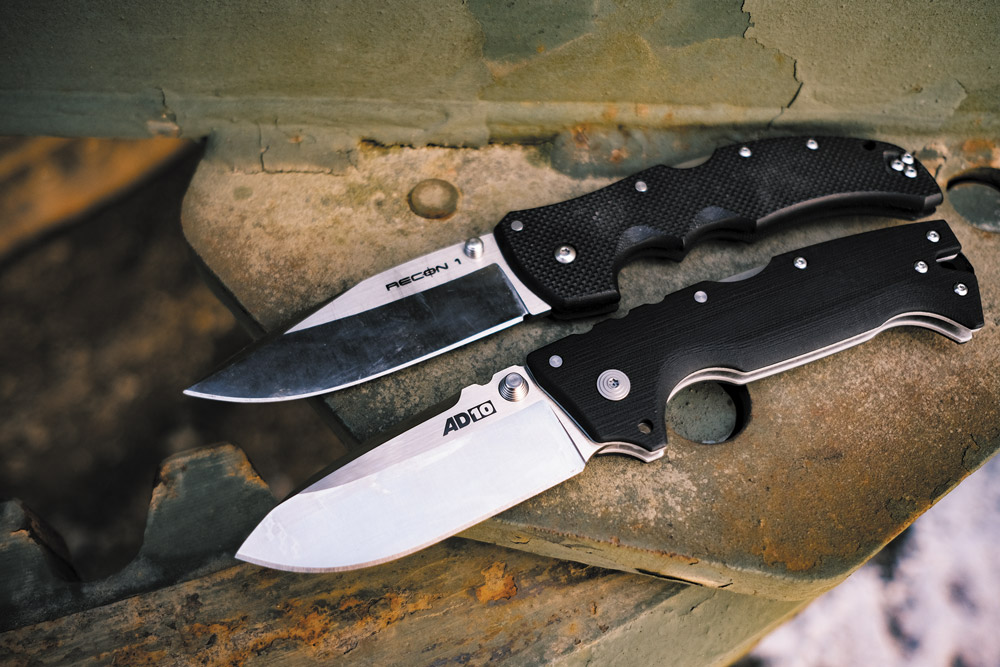 The AD-10 is pictured next to the Cold Steel Recon 1. The AD-10 offers a more comfortable handle and reinforcing liners. 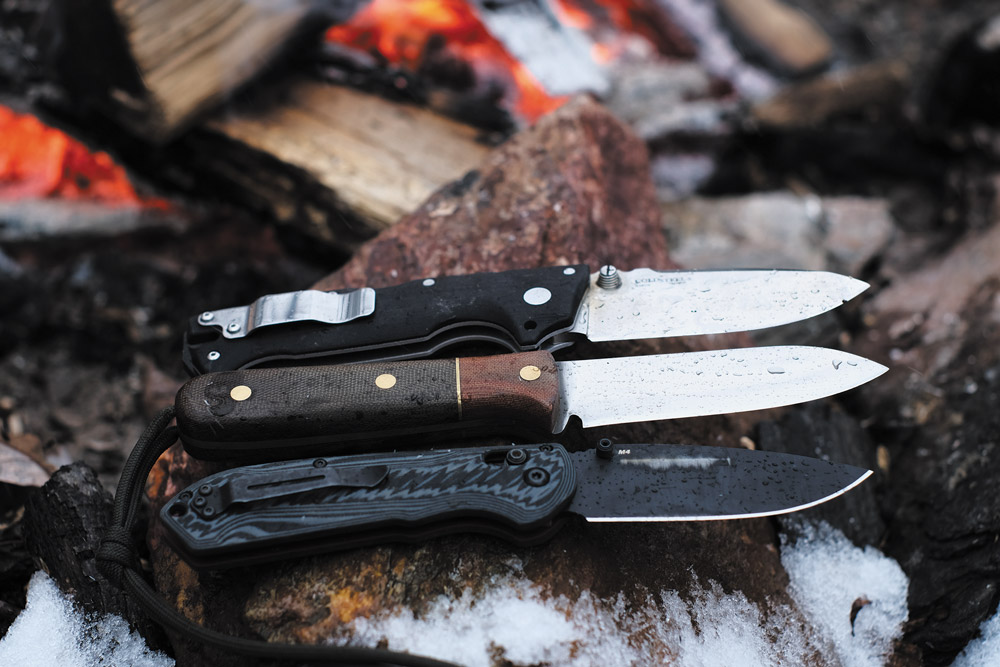 When open, the Freek and AD-10 are very close in size to this custom Dwayne Unger Kephart. While the Kephart has no moving parts to fail, it can’t be folded and slipped into a pocket. 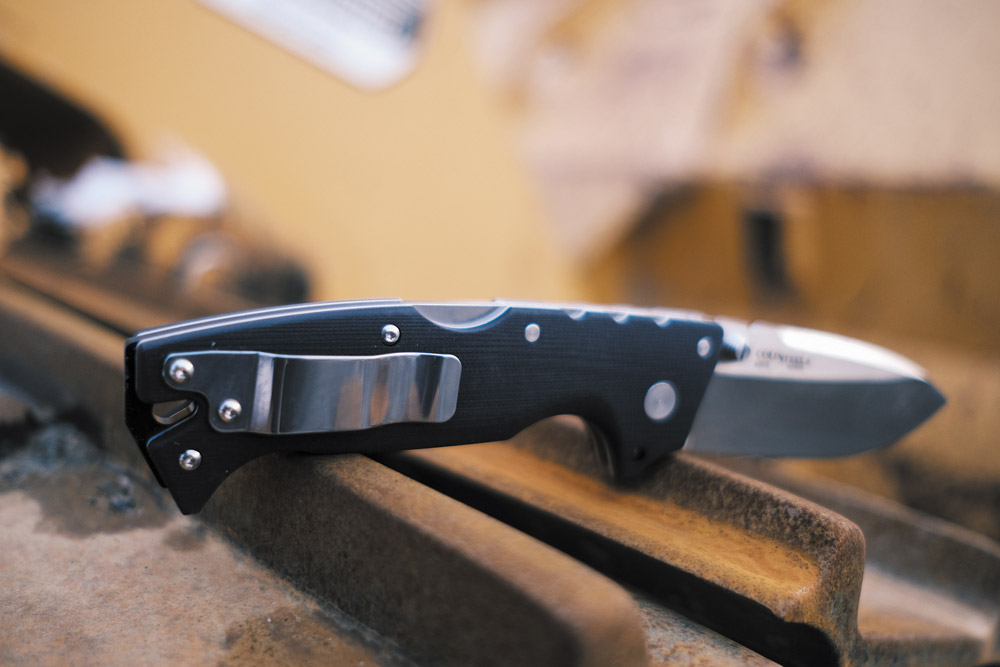 Even the clip of the AD-10 is overbuilt! 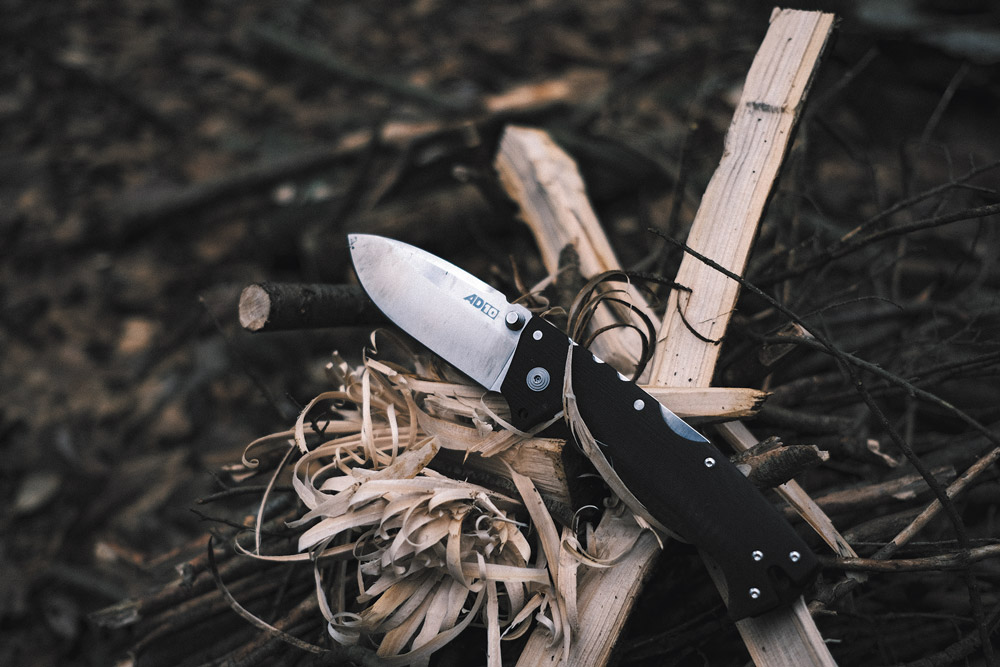 A Short History of Hard-Use Folders

Folding knives have been staple tools for thousands of years of human history. The oldest known folding knife is the Hallstatt knife, an ancient friction folder discovered in modern-day Austria and dating back to 500-600 B.C. As old as it is, its design and construction suggest that it was not the first of its kind!

From the time of the Hallstatt knife to the present, most folding knives were simple designs, held open by friction, spring tension or a very basic lock. While many of these designs were intricately crafted and capable tools in skilled hands, tasks like prying, stabbing, wedging and heavy cutting could stress them to their limits and beyond. They were not designed to endure extreme use.

In 1979, a young man with some high school shop skills and a desire to make a better quality knife than he could purchase at the time founded Benchmade.

Fast-forward to 1988, when Benchmade introduced a revolutionary new locking system called the AXIS lock. This new system features a spring-loaded hardened steel bar that rides in tracks milled into steel liners. When the blade opens, the bar rides forward in its tracks, where it engages the locking surface of the knife. The lock is simple, ambidextrous and very strong, a quality essential to hard-use folders.

Meanwhile, in 1980, Lynn Thomas created Cold Steel Knives. Mr. Thomas used the manufacturing prowess of several established knife companies to make knives of his own design. Thomas was best known for his popularization of the American-style tanto blade. While Cold Steel made folding knives for many years, it wasn’t until they hired custom knife smith Andrew Demko that they reached iconic status. Demko introduced the Tri-Ad lock into the Cold Steel lineup and changed expectations for lock strength forever.

The Tri-Ad lock relies on the back-lock mechanism made legendary by folding knives like the Buck 110. The key to the Tri-Ad mechanism’s extreme strength is the stop pin that buffers force and pressure away from the lock. The improved geometry of the lock/blade interface also helps. Over time, as locking surfaces wear, they force the lock inward. This motion creates an ever-strengthened lock interface.

In the years since the introduction of the AXIS and Tri-Ad locks, advancements in computer-aided design and manufacturing, along with advancements in metallurgy, have allowed both Benchmade and Cold Steel to refine and push the limits of their designs. Both companies are manufacturing hard-use folders capable of performing tasks that would have been impossible previously.