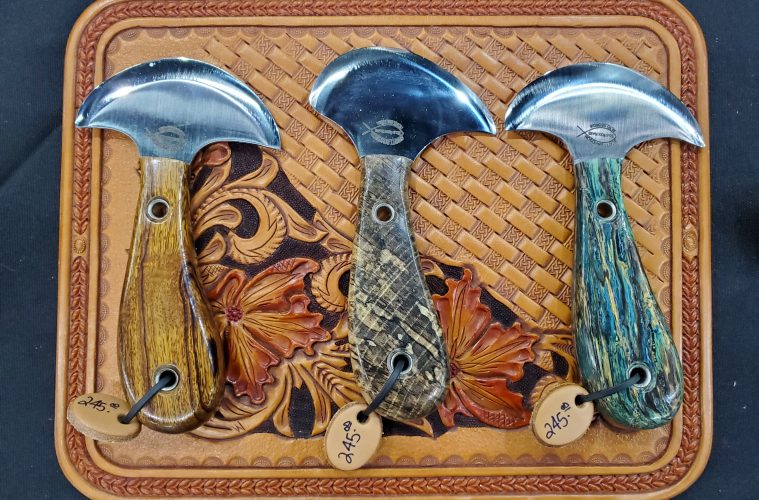 This year’s Blade Show in Atlanta was a great opportunity to reconnect with like-minded friends too often separated by many months and many miles. It provided a chance too for making new acquaintances and to benefit from their knowledge, experiences and perspectives on all things knives. 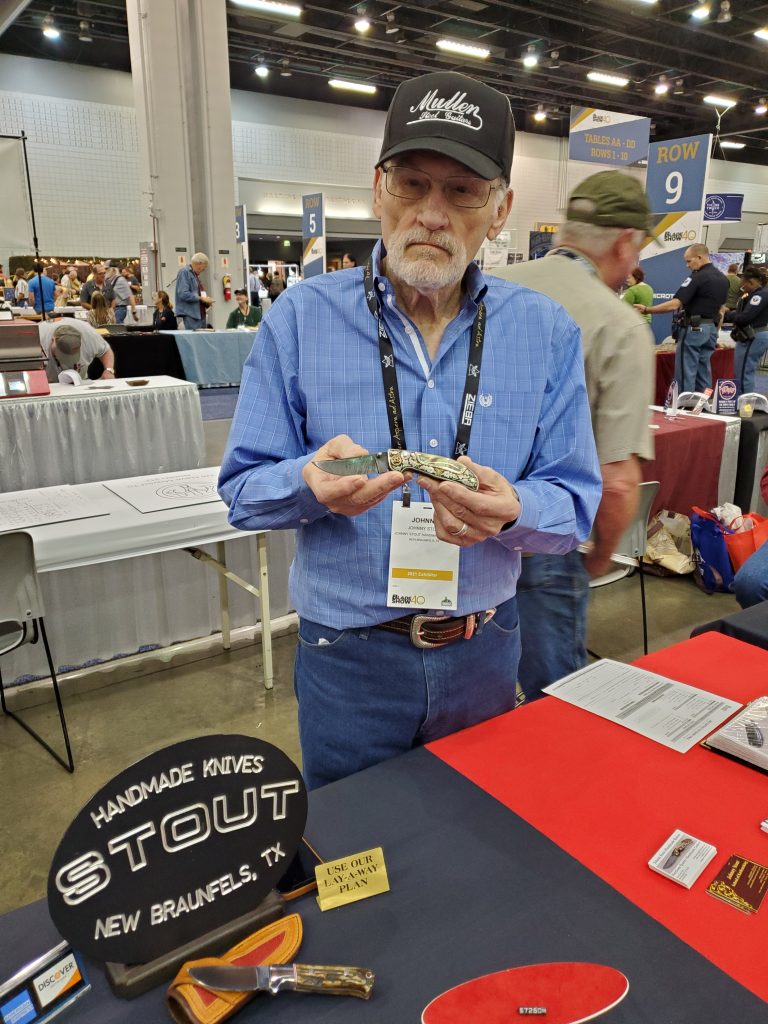 Johnny Stout was one of the knifemaking legends on hand at this year’s show.

In my wanderings about the show, I was fortunate enough to meet up with some fellow old-timers and strike up some memorable conversations. Our grey hair and passion for knives was our common bond. But I admit I was somewhat in awe as I listened intently to legends such as Johnny Stout, Bob Dozer and Ethan Becker.

This locking folder was just one of Johnny Stout’s beautiful creations on display at the show.

I felt honored to have the privilege of talking with these knife industry greats. Dozier, for instance, told me of setting up his first forge as a youngster, using coal from the steam engines of the local railroad and improvising his mother’s vacuum cleaner for a bellows. Young knifemakers who didn’t take advantage of the chance to stop by the tables of these industry giants really missed out. 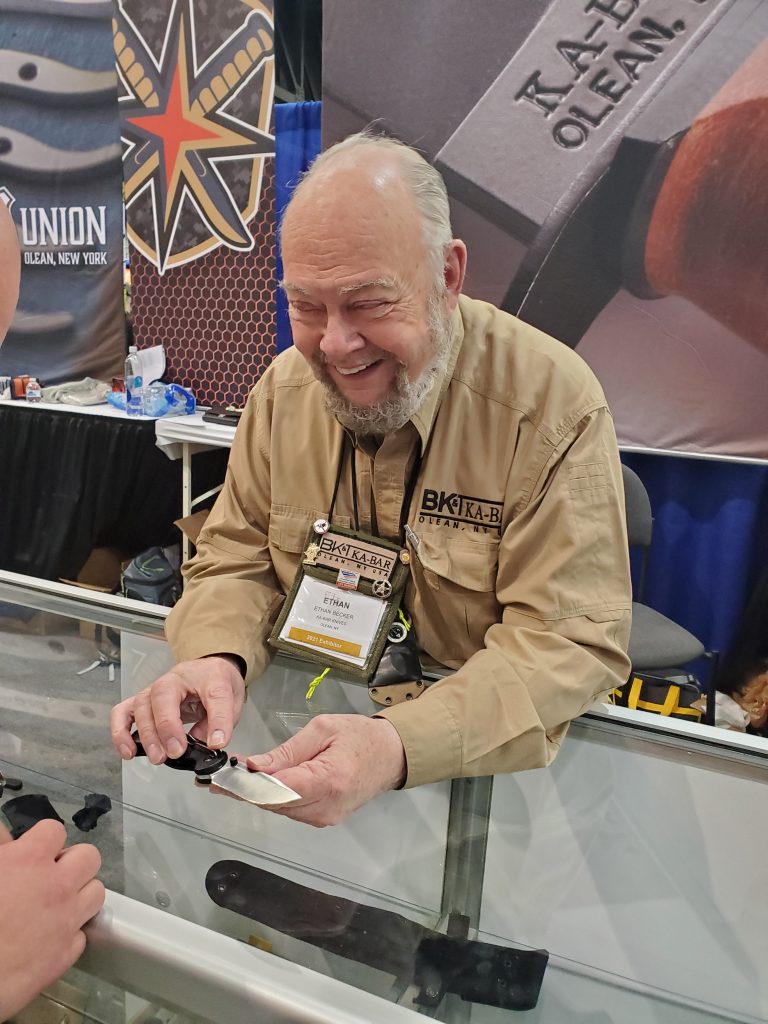 Sal Glesser And The American Dream

Another industry great I spoke with at the Blade Show was Spyderco founder Sal Glesser. Too often we look at big knife companies as nameless, faceless corporations. In the case of Spyderco, however, we have the perfect example of how a person in this country, through determination, hard work and innovative ideas, can start with practically nothing and build a company that’s among the best around.

Sal and wife Gail began their journey literally with a journey, criss-crossing the country in an old bread truck, towing their Volkswagen behind it, going from one county fair to another selling their ceramic knife sharpeners. Knives-and they make excellent ones- are merely the backdrop on their inspiring American success story.

Younger Influence At The Blade Show

Don’t let me give you the impression that the Blade Show was only a bunch of ancients talking about the good old days. It was great to meet and chat with some of the younger talent as well. 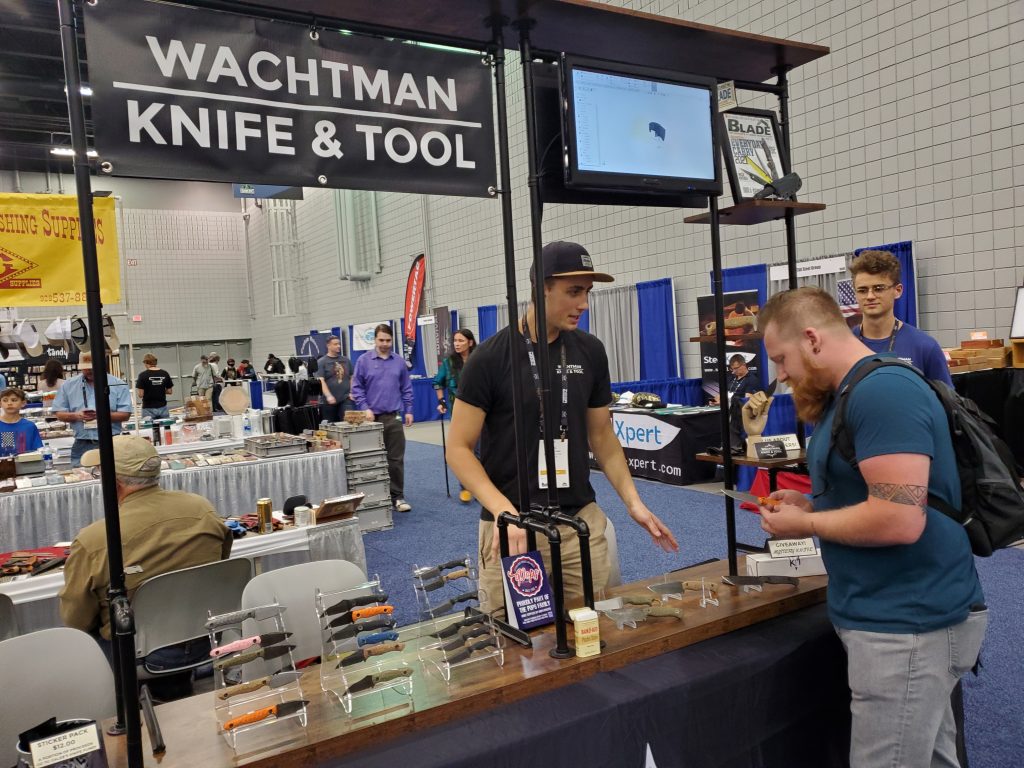 For instance, I spent some time with Alec Wachtman, now a veteran knifemaker at the age of 20, who started making knives in his early teens. Alec was there with his whole family. His company, Wachtman Knife and Tool, will be one to watch in the coming years and I hope to review one of his knives in a future issue of Knives Illustrated. 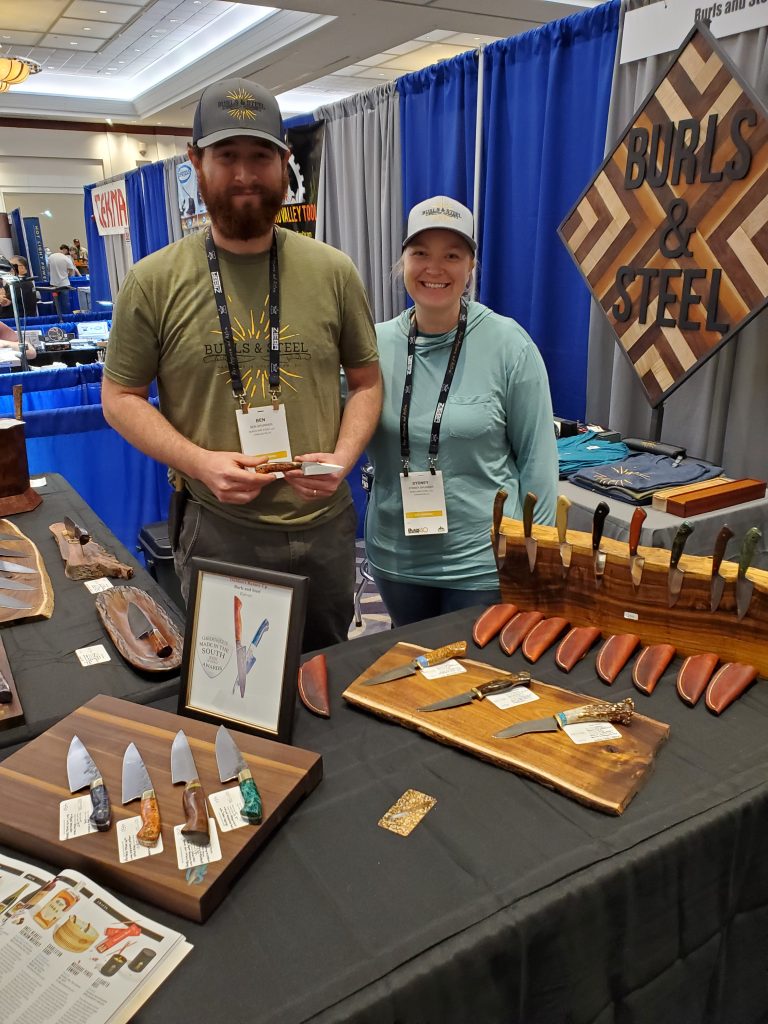 Ben and Sydney Spurrier of Burls and Steel with their 2021 Blade Show display.

At the Burls & Steel booth, I spoke with Ben and Sydney Spurrier, a young knifemaking couple from South Carolina. I couldn’t resist getting one of their Osprey fixed blades. Look for my upcoming review of it here on KnivesIllustrated.com.

Ken Hunt of Attleboro Knives shared some excellent family stories regarding the knives he produces. We’ll be highlighting his Gramps knife soon.

I love gadgets and the best one I saw at this year’s Blade Show was a multitool from UpKnife. The designer and manufacturer, John Risch, brought his whole family to the show. What great people! John took me through all of the finer points of his clever invention, from its three-position bolt-action blade, to its saw, wire stripper, can/bottle opener, bit driver and assortment of wrenches all in one flat, easy-to-carry tool. I’ll be putting that one to the test in an upcoming issue as well. 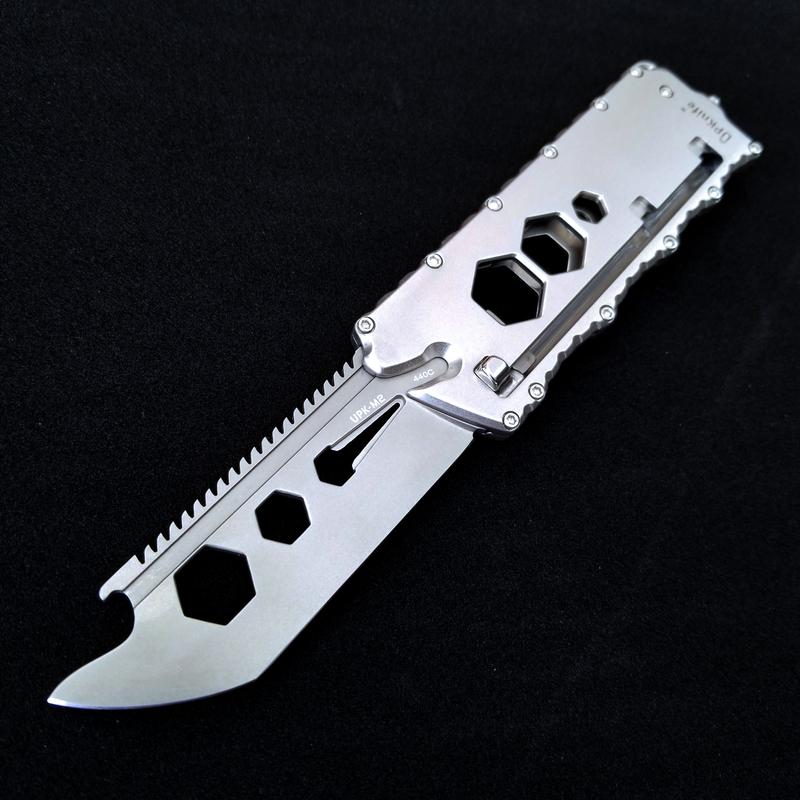 The author found the UpKnife multitool to be an exceptional design.

Handling Lots of Knives at Blade 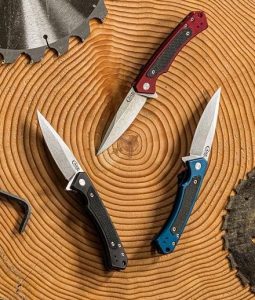 Many manufacturers have already announced their new products for this year and others have some announcements coming in a couple of months, Still, the show gives people the opportunity to pick these blades up and try them on for size.

I got to see the new EDC designs by W.R. Case & Sons: the drop-point Marilla and the tanto Kinzua. Both are manual flippers and both are departures from the traditional slip-joint folders for which Case is best known.

These should be well received and the Marilla took home the show’s award for the best American-made knife of the year.

There were knives too that went on my wish list from White River Knives, Bradford Knives and CRKT.

Many Custom Makers In Attendance

I met many skilled custom knifemakers at the show, too many to list here. I was tempted by many of their fine products. It was no place for a knife enthusiast with room on his credit card limit to forget about his family budget. We’ll be sending writers out in the coming months to visit the shops of some of these makers to profile them in future issues. 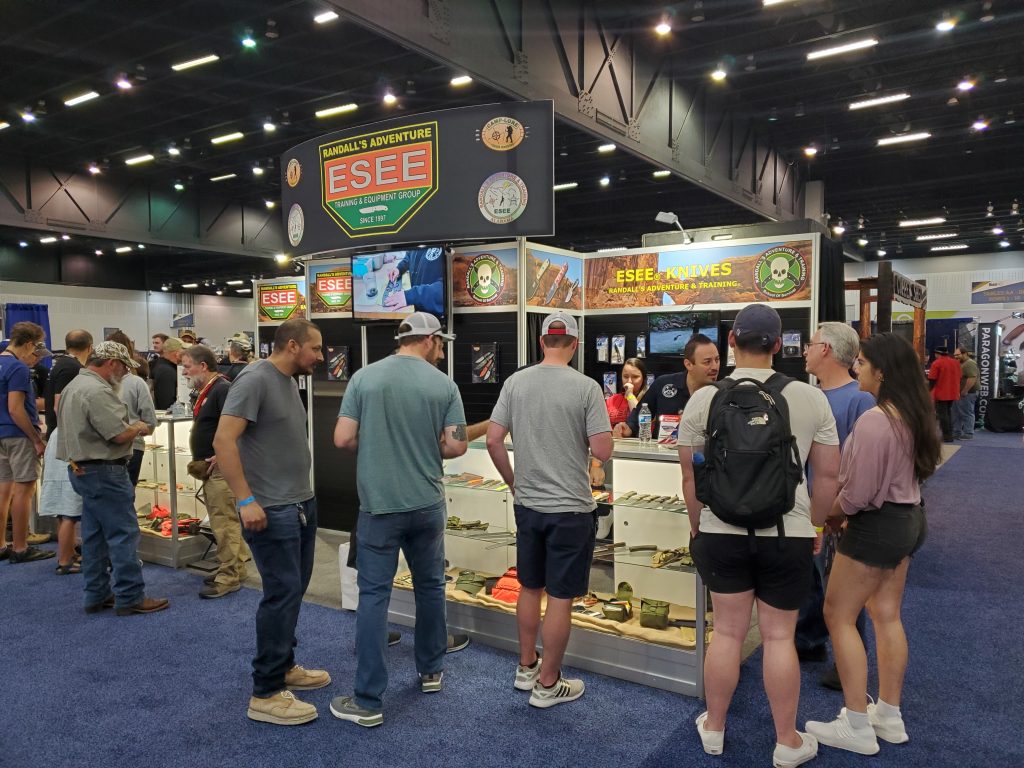 Outdoor Expertise On Hand Too 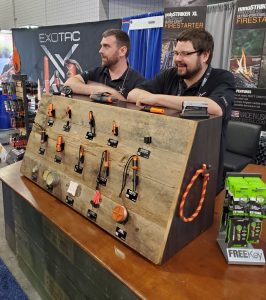 Chris Jensen (left) and Andrew Cotton were on hand for EXOTAC.

The Blade Show offered more than knives and knifemaking supplies. For those of us who regularly step off pavement, there  were experts on hand in the realm of outdoor survival and bushcraft.

Jeff Randall was there with his crew from Randall’s Adventure & Training/ ESEE Knives, The always energetic Joe Flowers was there too, helping to man the Condor Tool & Knife display. And right around the corner from those guys was EXOTAC with their lineup of fire-starting supplies and other gear.

Every enthusiast should try to make it to a large knife show at least once. It’s well worth the trip to feed your obsession. But until the next one comes around, we at Knives Illustrated will continue to update you on the knives and industry news that matters.