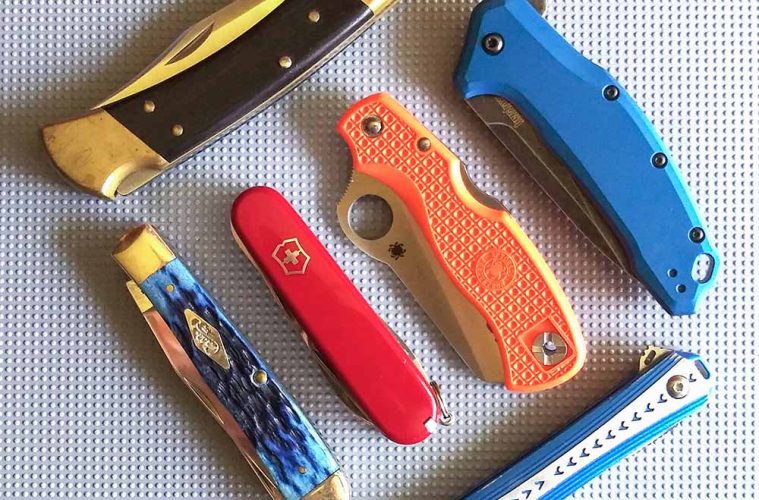 I doubt many would argue that the folding knife was one of the greatest developments in the history of bladed tools.

When designed well and executed properly, the folder allows the user to carry a sharp knife just about anywhere without having to bother with belt sheaths and what not.

This isn’t just convenient; it also leads to fewer trips to the Human Resources office at work.

Over the years, makers have devised a number of ways to open and secure the blade, some fairly simple and others decidedly unique and elaborate.

Assuming you’re buying a knife to use rather than one that’s simply purchased for looks, the mechanisms used in the design should factor into your buying decision. If a knife is awkward or clumsy to open and close, odds are it won’t be carried all that often. 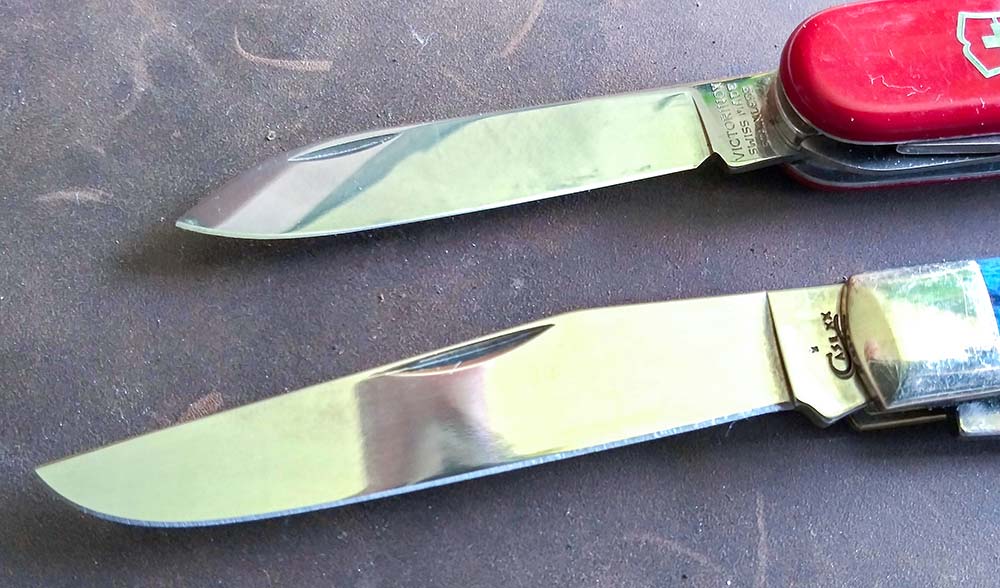 Nail nicks are simple and have been in use for many years.

This is probably the single most common feature and the one most of us had early on in our knife collecting careers. It is simplicity itself. There’s a small groove along the spine of the blade.

To open the knife, you grasp the blade at that point and swing it open. There are a couple of advantages to this basic design. It is the cheapest, construction-wise, and thus isn’t adding much to the knife’s bottom line.

It is also very safe, as it usually requires both hands to open the knife. That, however, is also its drawback, as it is very difficult, though not impossible, to open a knife like this with one hand. 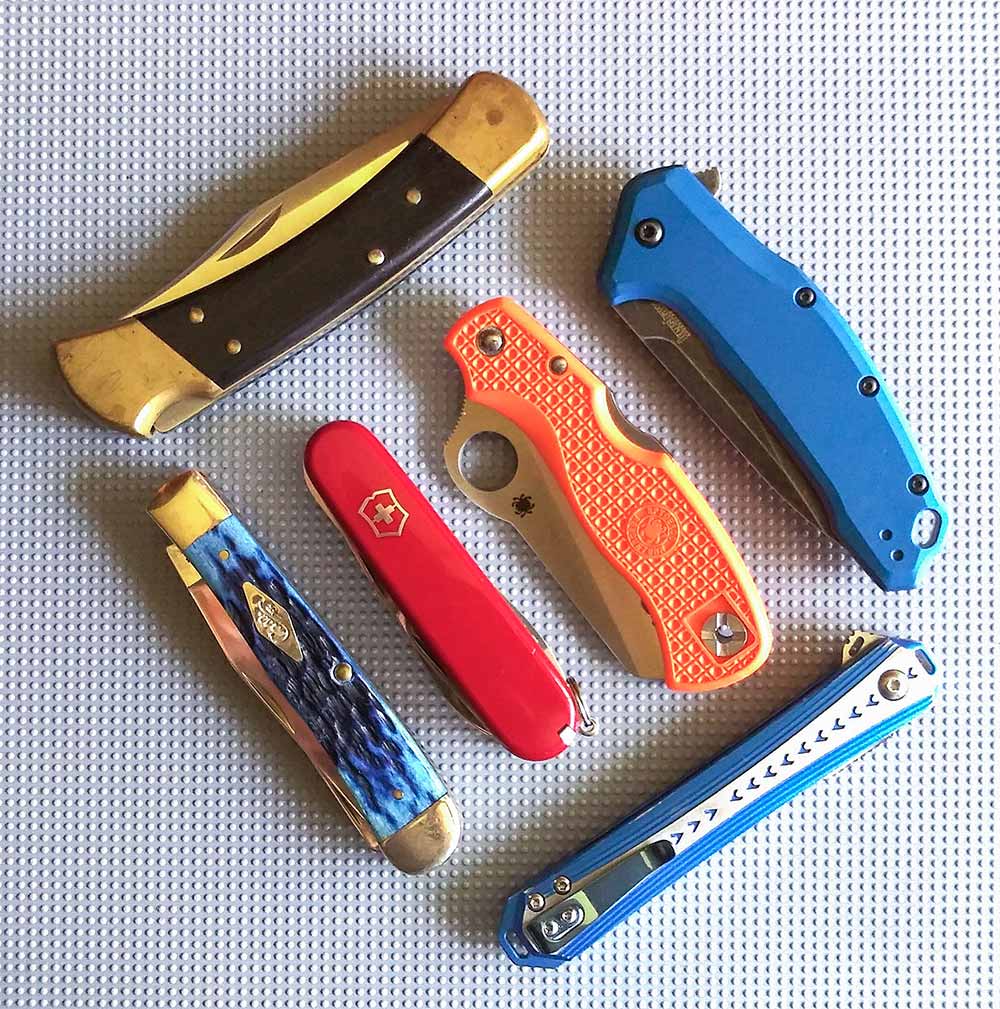 “Assuming you’re buying a knife to use, rather than one that’s simply purchased for looks, the mechanisms used in the design should factor into your buying decision.”

While they were certainly around prior, knives with thumb studs ramped up in popularity in the 1980s, as I recall. You could even buy studs that clipped on to folding knives that weren’t already equipped with them.

The idea was basically to take a common slip-joint knife and make it easy to open with one hand. You simply push the stud with your thumb to rotate the blade upward and open.

Knife studs are usually either right-handed or left-handed, though some folding knives will come with a stud on both sides of the spine.

“When you’re holding the knife in your hand, the movement is instinctive and effortless.”

Predominantly a Spyderco design, this is something of a variation on the thumb stud idea. The knife is designed with a large hole along the spine. The spine itself arcs upwards to make room for this feature.

In operation, it works similar to the thumb stud, but rather than pushing against a small outcropping of metal, you’re pushing against the interior of the hole in the blade. This sort of design is ambidextrous. 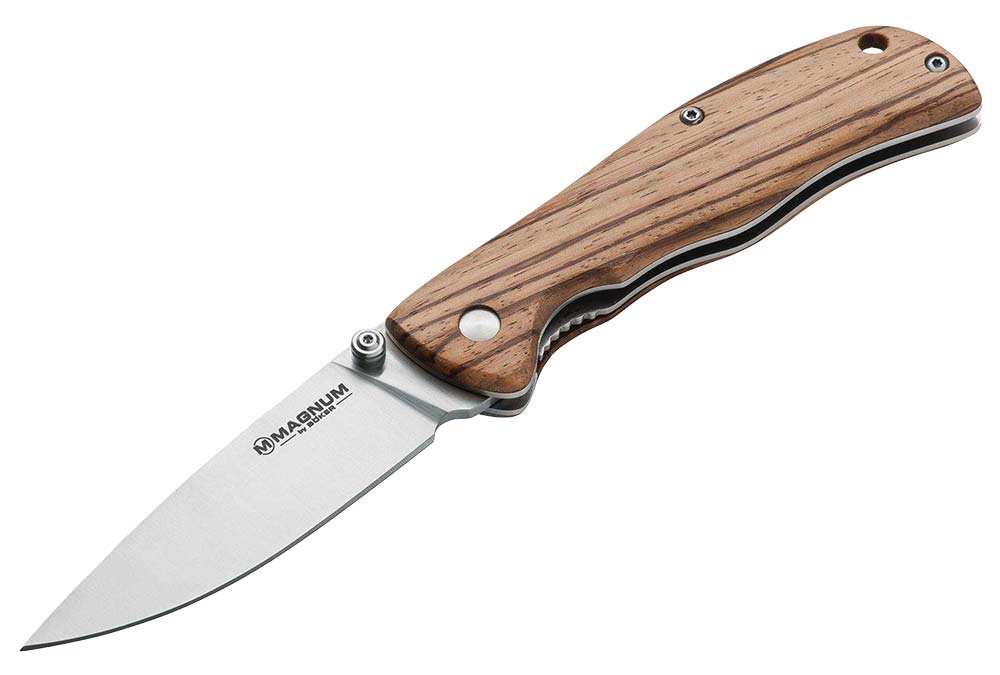 Provided the knife has smooth action, a flipper can open nearly as fast as an automatic knife. When the knife is closed, a tiny lever of sorts sticks up along the back of the knife handle, near the pivot. Pulling that lever with a finger swings the blade into position.

When you’re holding the knife in your hand, the movement is instinctive and effortless. As a bonus, the flipper becomes something of a small finger-guard while the knife is open.

It could be a button or a slide, but what happens is that when it is activated, the spring-action is released and the blade shoots into position. You’ll often find the slide on OTF (out-the-front) autos while the button is more common on the switchblade sort of knife.

While laws are getting a little laxer in some areas, it is still worth your time to verify the legality of carrying an automatic knife before you toss it into your pocket and leave for work. 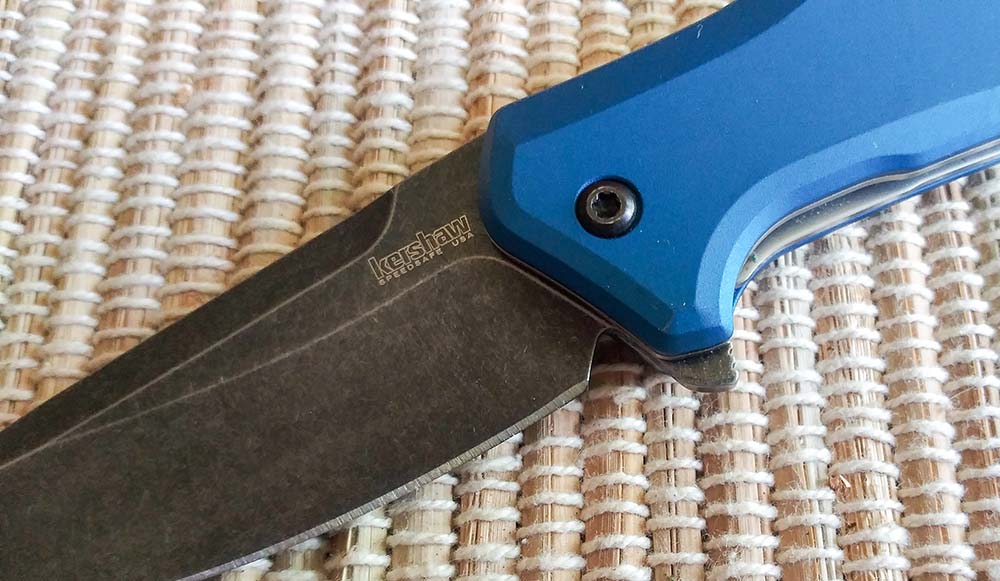 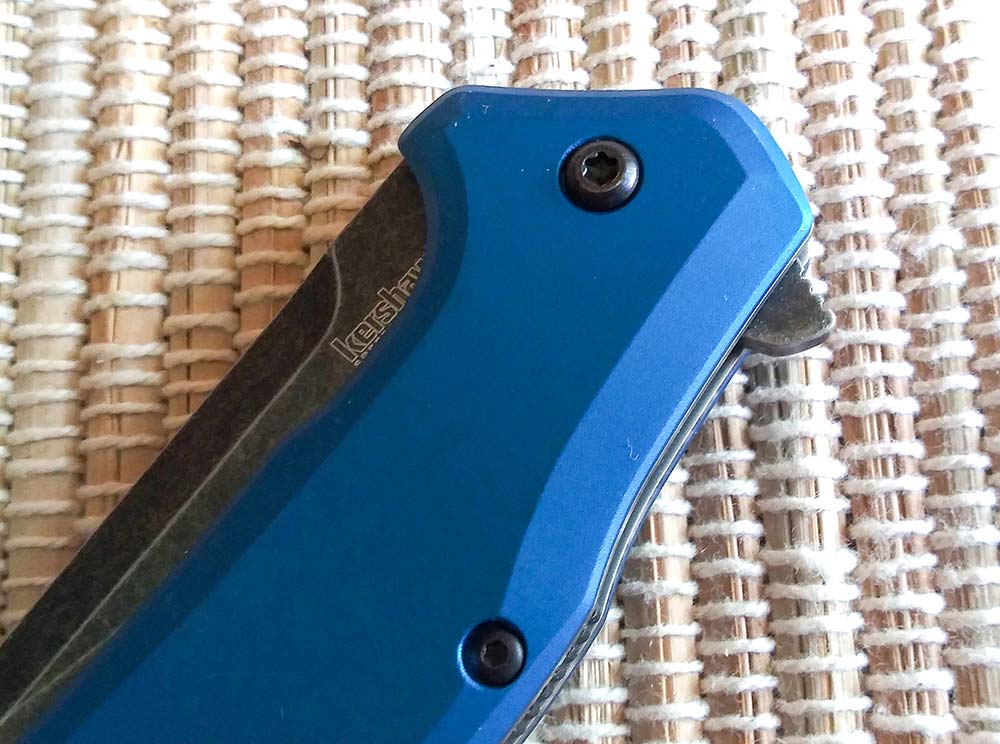 Flipper opening knives are wildly popular and they can open almost as fast as an automatic knife.

This is sort of like automatic-light. You need to initiate the blade’s movement, such as through a thumb stud, and once the blade reaches a certain point it will snap open on its own. As with the autos, consult the laws on the books to make sure you won’t get into hot water simply for carrying a tool to open boxes.

“…Consult the laws on the books to make sure you won’t get into hot water simply for carrying a tool to open boxes.”

When the work is done and it is time to close the knife, there are just as many options out there as there are for opening it. As a practical matter, what we’re talking about here is what keeps the blade in place until you’re done using it, as all folding knives, by definition, fold to closed.

One of Spyderco’s trademark features is the thumb hole on the blade’s spine.

The simplest on our list is also the most common. A slip joint has no locking mechanism, just a tension spring that holds the knife in either the open or closed position. With a small amount of pressure, the blade will pivot.

While these are simple and easy to operate, it is important to remember that nothing stops that blade from moving, so be careful that it doesn’t snap closed on your fingers.

Many of us have had one or another lock-back knives in our youth, often either a Buck 110 or some knockoff or clone of it. As the blade opens, a rocker arm locks into a notch at the base of the blade, securing it in place. Pushing the back lock moves that arm out of position and allows the blade to fold closed.

The Benchmade Auto Fact is a great example of an automatic knife.

With this extremely common model, a tensioned bar inside the knife slips into place under the blade when it snaps into the open position. It remains there, keeping the knife blade secure, until you manually push it to the side and then close the knife. This can be a very secure mechanism, depending upon how much of the blade the bar is engaging.

This works very similarly to the liner lock. The difference is that rather than the locking bar being inside the liner, it is part of the actual frame of the knife. This locking mechanism was invented by Chris Reeve of Chris Reeve Knives. 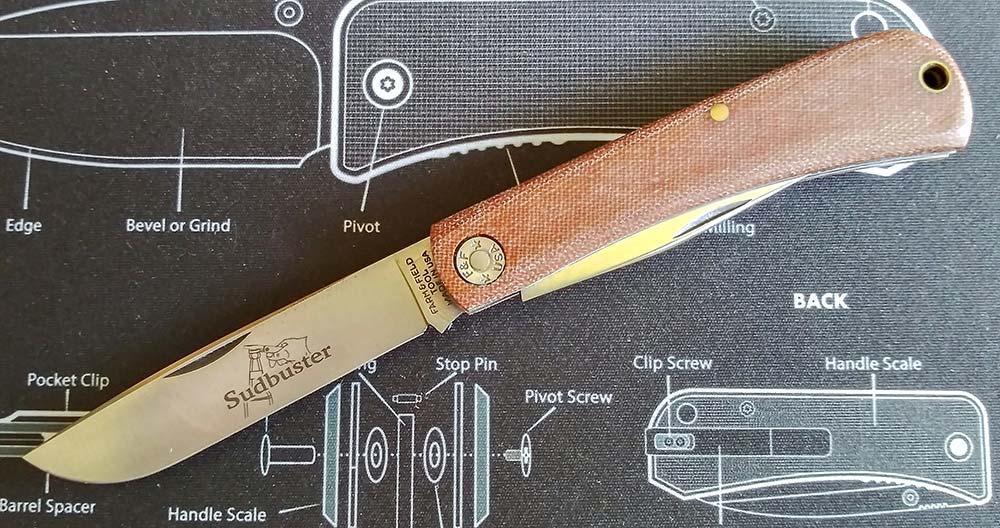 This is the #71 Sudbuster  from Great Eastern Cutlery. It is a classically designed slip-joint knife.

Typically found on automatic knives, the button lock consists of a cylinder of sorts that rests against the base of the open knife blade. To close the knife, you push in the button, which slides a cutout portion of the cylinder under the blade, allowing it to fold closed.

A number of proprietary mechanisms are on the market that are usually brand-specific, such as the ring lock that is found on Opinel folding knives.

The important thing to consider when shopping for a folding knife is how you’ll be using it and how that translates into the open/close mechanisms you’ll find most useful. Having at least a basic understanding of how each knife opens and closes can help you to make a more informed choice in that regard.

For example, if you’re looking for a folding knife that, in a pinch, could be used as a defensive weapon, you’ll want something that you can open with just one hand. If you’ll be doing any sort of heavy-duty work with the knife, you’ll want the strongest locking option you can find.

The Buck 110 is a lock-back knife. The blade locks into place when opened and the user must depress the release on the back of the handle to close it.

The LCK+ from CRKT is a flipper- style knife that is equipped with assisted-open technology. CRKT photo. 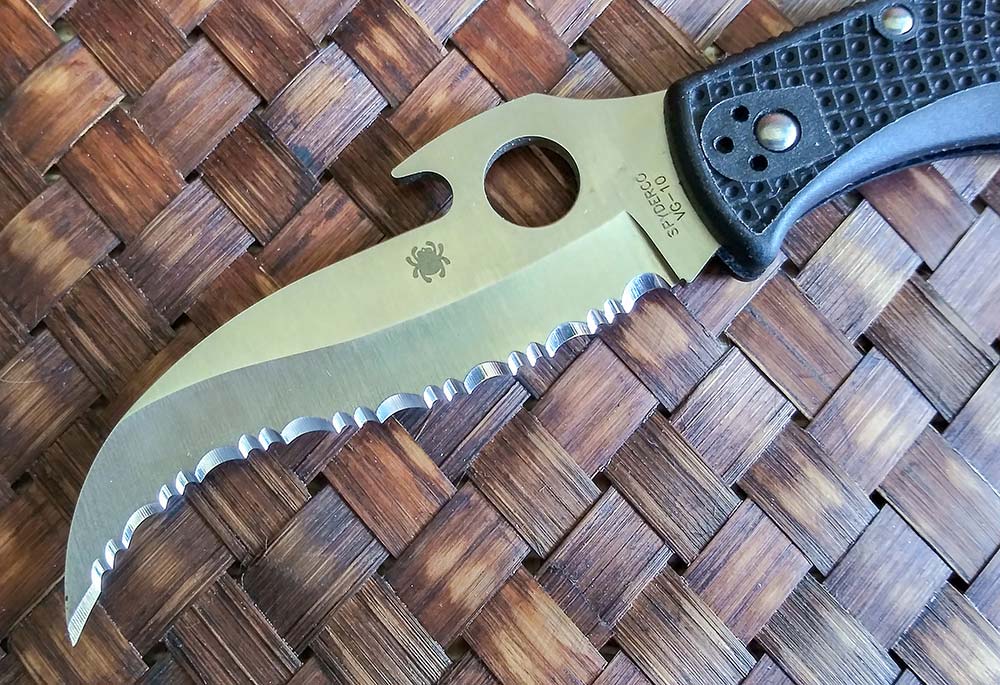 The Emerson Wave is the hook shape at the top of the knife blade and it catches on your pocket to open the knife as you pull it free. 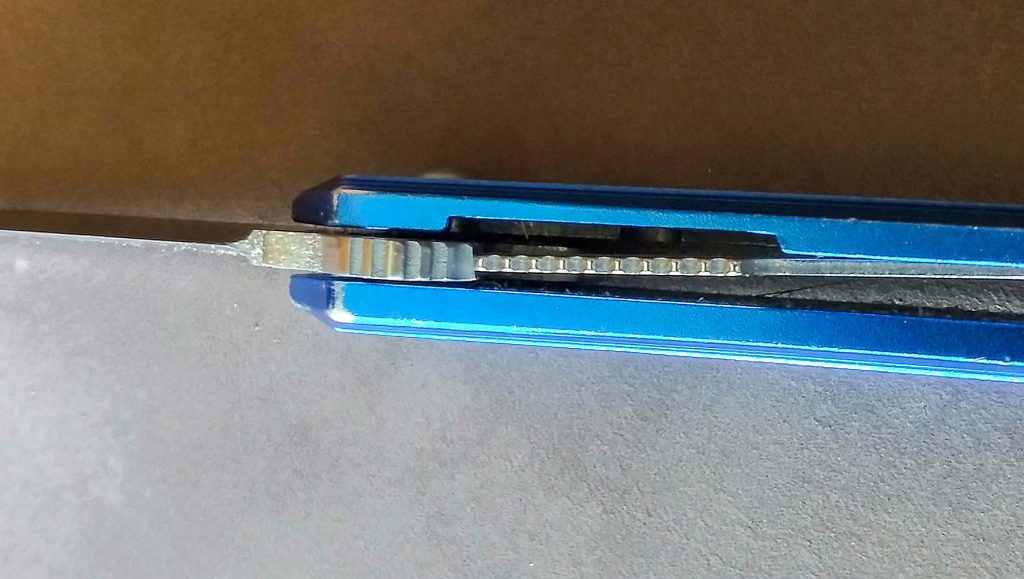 A liner lock uses a thin bar of metal that wedges into place under the blade when the knife is opened. It will be moved to the side with a thumb or finger to close the knife. 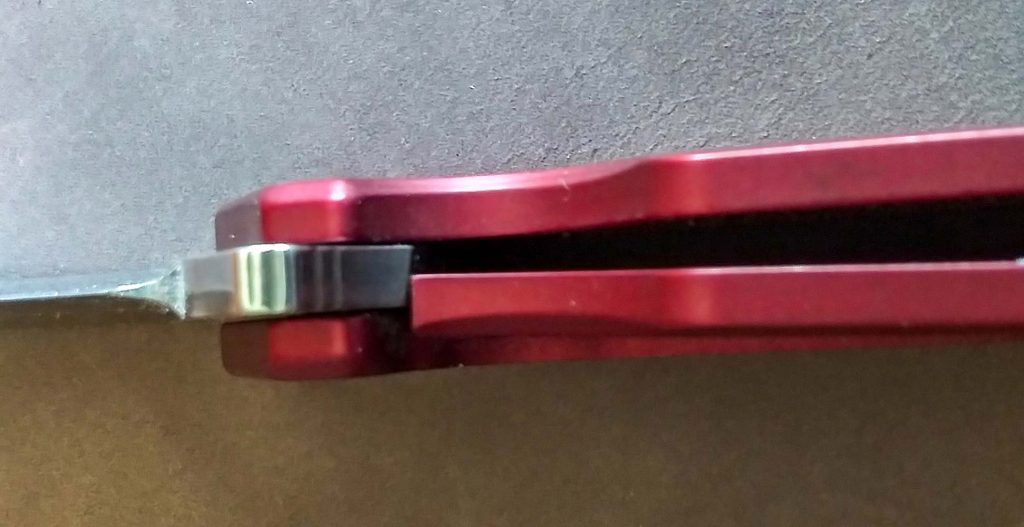 Similar to the liner lock, the frame lock has a piece of metal that fits under the blade of the folding knife. But in this case, it is a part of the frame rather than the liner.

A button lock moves a cylinder inside the knife that then allows the knife to close.

Knifemaker Ernest Emerson was asked by the Navy SEALs to devise a feature that would prevent a knife edge from traveling along another knife’s spine and causing injury to the hand during a knife fight.

When he came up with a workable design, he discovered a side benefit. If you pulled the knife from the pocket in just the right way, the hook on the spine would pull the knife blade open in one smooth movement.

With a little practice, this works really well with getting the blade into action nearly instantly. However, there are a couple of drawbacks. If you’re not careful, the wave or hook can catch on other items in your pocket, such as keys. Also, the movement to open the knife causes that hand to travel backwards a bit, possibly endangering anyone behind you.

A version of this article first appeared in the Jan/Feb 2023 print issue of Knives Illustrated Buyer’s Guide.