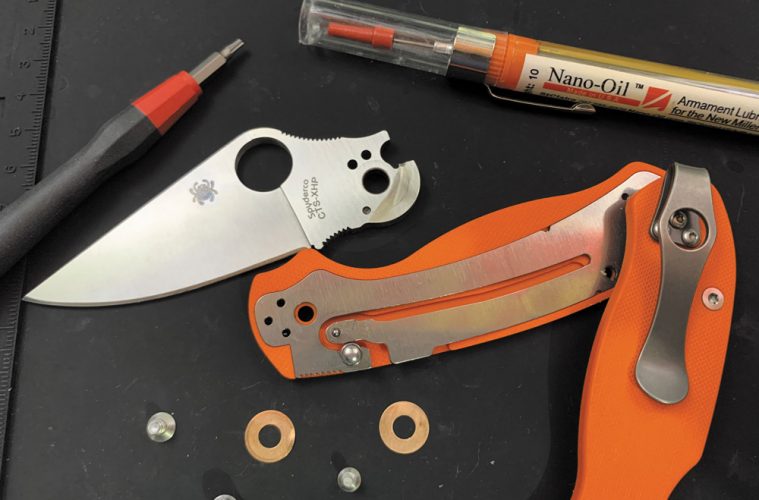 How to Assemble a Knife Maintenance Kit

Want to make your folder looking and feeling like new or even better than new? Brush up on your knife maintenance skills.

Folding knives can be many things. They can be tools, weapons, fidget-toys or even just nothing more than fancy pocket jewelry to show off to your friends. But at the heart of it all, they are mechanical objects. They are machines to an extent, after all.

I’m a fan of almost anything mechanical. Old cars, old typewriters, bicycles and especially pocket knives. I also try to make sure that I at least have a rudimentary knowledge of how to disassemble and maintain most of the machines that I own. Except my stove, furnace and water heater. Those have the potential to go BOOM and I cannot be trusted.

But my knives … I enjoy taking them apart and maintaining them nearly as much as I do using them. It’s not as difficult as you think, and with just a few basic tools, it can actually be a very meditative and relaxing experience. Here is a guide to a few things that you will need to build a basic, but fairly comprehensive knife maintenance toolkit as a beginner. 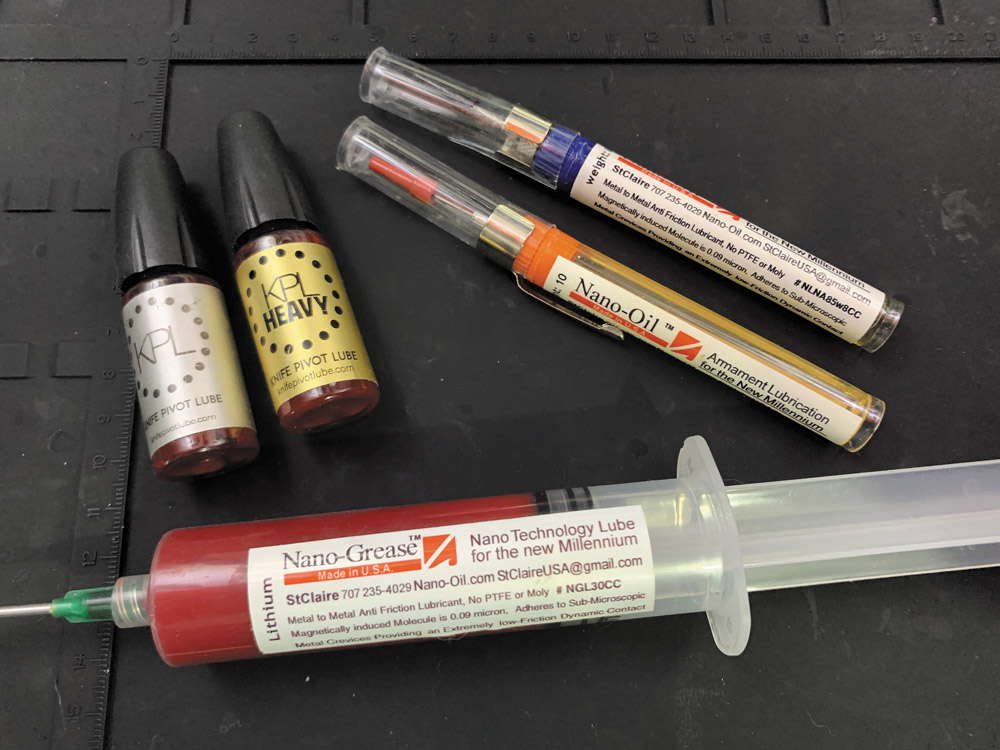 Everyone has their favorite brand of knife lube, but products from Knife Pivot Lube and Nano-Oil are always ranked amongst the best. 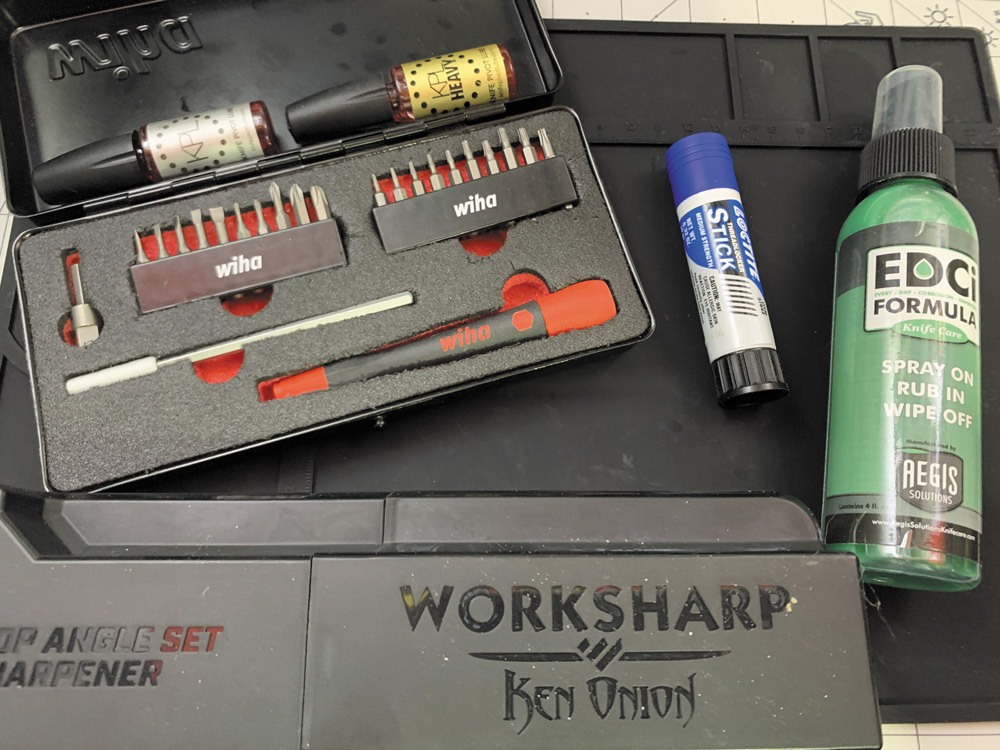 You only need a few basic things to assemble a very useful knife maintenance kit. 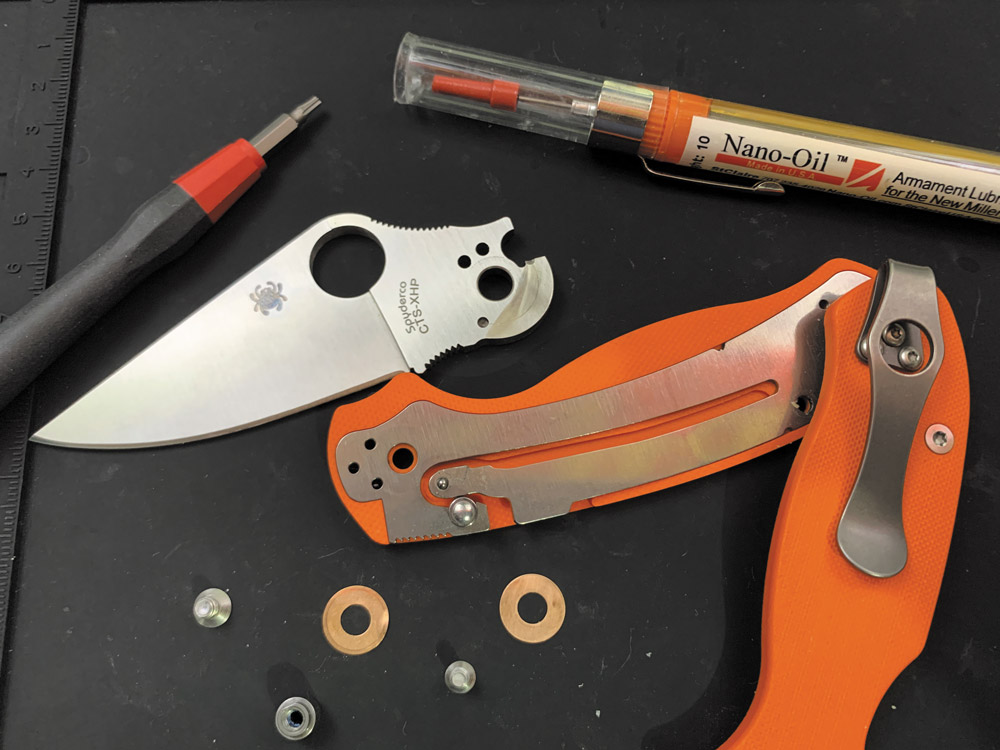 If you have the right tools and a tiny bit of knowledge, disassembling a knife can actually be fun and relatively easy.

Most remotely modern and decent pocket knives rely on Torx bits. Yes, you will occasionally encounter proprietary screws that require special tools or pinned-together construction that you can’t disassemble at all, but it isn’t terribly common.

The primary sizes that you’re going to encounter are T6, T8 and T10. You can just pop down to your local hardware store and buy a whole set, but I don’t recommend that you do that. All screws are not created equal and a soft screw paired with a soft Torx bit is a recipe for tears. You can’t control the quality of your knife’s screws, but you can control the quality of your tools.

Some of the best Torx sets you can buy are from Wiha. They are widely available online and especially with something smaller and more often used like a T6, will last a lot longer than your average hardware store bits will. If you don’t want to invest in a full driver kit, Wiha also makes individual wrenches with plastic handles that aren’t as nice as the bit sets, but will still outlast a bargain set from a big box store.

As far as drivers go, you don’t have to be as picky. A box-store driver will work just fine for knife maintenance as do the ones provided by Wiha. However, like most things in the knife community, you can go completely insane with brass, copper, titanium or even full-custom drivers costing $100-$500. I’m not recommending you spend that much, but something with a free-spinning section on the butt of the handle is very … handy?

Another thing that you’ll want when putting those screws back in is Loctite. And I cannot stress this enough … BLUE Loctite.  Red Loctite is meant to be permanent. Blue can be broken loose fairly easily as long as you don’t go insane with it. A little goes a long way. The liquid works fine, but I actually prefer the stick. It’s just less messy and easier to apply.

If you have a screw that some crazy person who hates the world has used too much Loctite on, or has even been sadistic enough to use the red, quite often (but not always) heating up the pivot with a hair dryer or even a soldering iron can often do the trick. Just don’t over-torque and strip a screw. Man, I hate red Loctite … 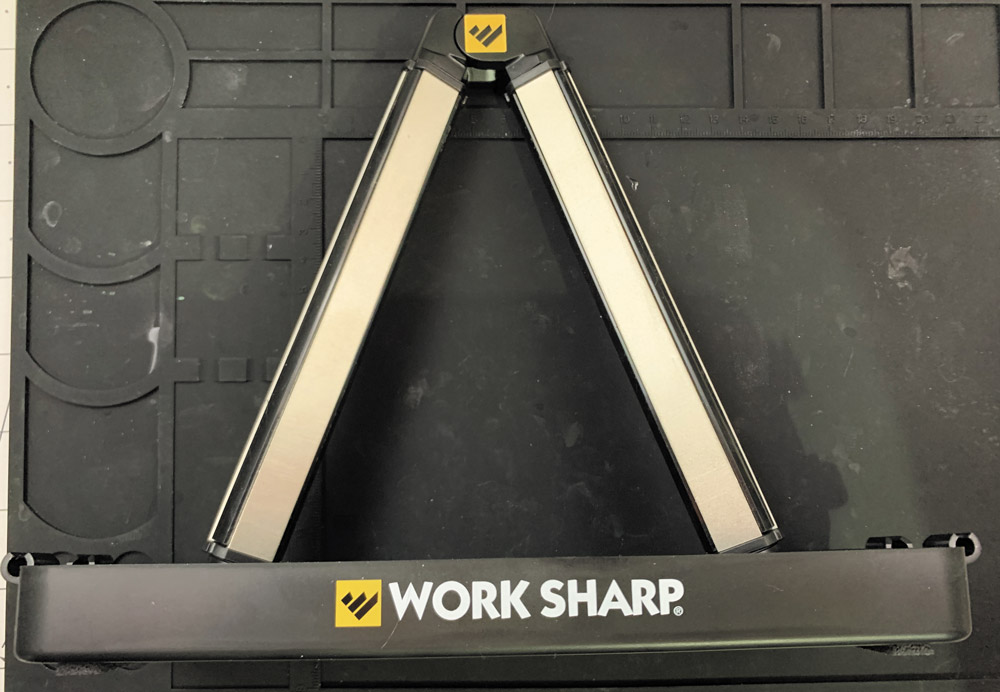 The Work Sharp/Ken Onion Angle Set Knife Sharpener is a relatively inexpensive and easy way to get into sharpening.

Once you get that knife apart, you’re probably going to want to clean it. The supplies for this part of knife maintenance are much easier.

I still haven’t found anything that works better for cleaning out old lube than plain ole 98% isopropyl alcohol. There is no brand that’s better than any other. Just grab whatever your local drug store or grocery store has in stock.

To mop up all of that alcohol and grit, you again don’t need to get too fancy. A lot of people use cotton first aid pads or swear by microfiber cloths. I use the latter for wiping off blades and scales, but for the actual cleaning of bearings, bearing surfaces and other internals, I just cut up some of the many old free tee shirts I’ve gotten at bike rallies over the years.

A lot of G10 scales can get a sort of dried-out look over the years. If you want to bring them back to their original glory, a small amount of mineral oil has always done the trick for me. Just wipe on a small amount, let it sit for a few minutes and wipe it off. It soaks right in and doesn’t leave the knife all slippery or anything.

I was trying to decide where to place this particular product, but I love it and feel that any knife maintenance kit isn’t complete without it. This goes double if you have non-stainless blades such as D2 or M4. That product is Aegis EDCi. As the instructions on the bottle indicate, all you do is spray it on, rub it in and wipe off the excess. After that, it provides an amazing amount of corrosion protection to your blades. And it’s certified food safe! 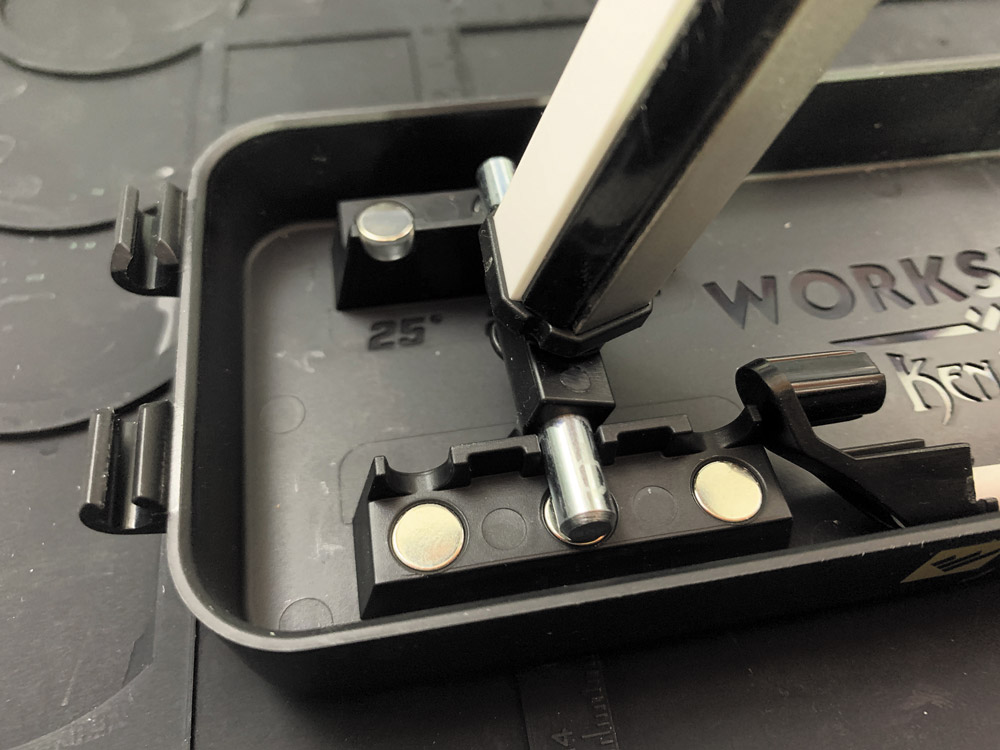 With its magnet-based system and set angles, the Work Sharp/Ken Onion Angle Set Knife Sharpener is dead-simple to set up.

After your remove all of that old lube, you’re going to need some new stuff!

Now, I fully admit that bringing up your favorite knife lube is just begging for an argument. Everyone has their favorite and a lot of people are dedicated to theirs with an almost religious fanaticism. You may as well walk into a bar in Boston and loudly proclaim that Tom Brady is slightly overrated. You’re going to get some blowback. That said, here are two of mine.

Nano-Oil was (and for many, remains) the gold standard of knife lube, and deservedly so. It comes in several different weights, several different applicators and is truly high-tech stuff. There’s even a grease! It’s mostly odorless, other than the grease, which has a very strong smell for a day or two. I’ve been a fan and user for years. Also … It’s made here in the USA! The downside is that it isn’t exactly cheap, but a little goes a long way. Of all their products, I find myself using the 10 weight with the needle applicator far and away the most.

The “newcomer,” and the brand that is taking everyone by storm, is the not-so-cleverly named Knife Pivot Lube. When this stuff appeared a couple of years ago, knife reviewers on YouTube and everywhere else raved about the stuff. To the point that people claimed a lot of us were on the take. Well … sometimes stuff gets hype because it’s just really good. And this stuff is great. It comes in a nice needle-applicator bottle and two weights. Standard for most uses and a Heavy variant that is excellent to put on a detent ball. It’s pretty inexpensive to boot. The only downside is that it does smell a bit of cherries. That mostly fades away after a few days.

Choosing a sharpening system as a newcomer can be very intimidating. Everyone on the internet is going to shout at you to get a KME or a Wicked Edge or a Viper Sharp, or tell you that real men only sharpen freehand and you need enough stones to build a reasonable facsimile of the Parthenon. This just isn’t true.

For 90% of us, a good compact budget system will serve you just fine. I used to primarily use the SpydercoSharpmaker for my day-to-day touch-up tasks, but now I’ve mostly converted to this new system.

The Work Sharp/Ken Onion Angle Set Knife Sharpener has been great. It’s super easy to use, has multiple stones, and could even handle a mild re-profiling on some steels if you’re more patient than I am. I prefer something like the aforementioned KME or Wicked Edge for serious work like that. But, if you just need to touch-up a blade after a couple of days of hard work, the Work Sharp can handle it in minutes and with a minimum of swearing.

Another important thing to have is a decent strop block. My favorite is the Knives Plus Strop Block. It has enough grip to hold on to, works well, and can just be “recharged” with some olive oil if you don’t want to use actual diamond compounds. 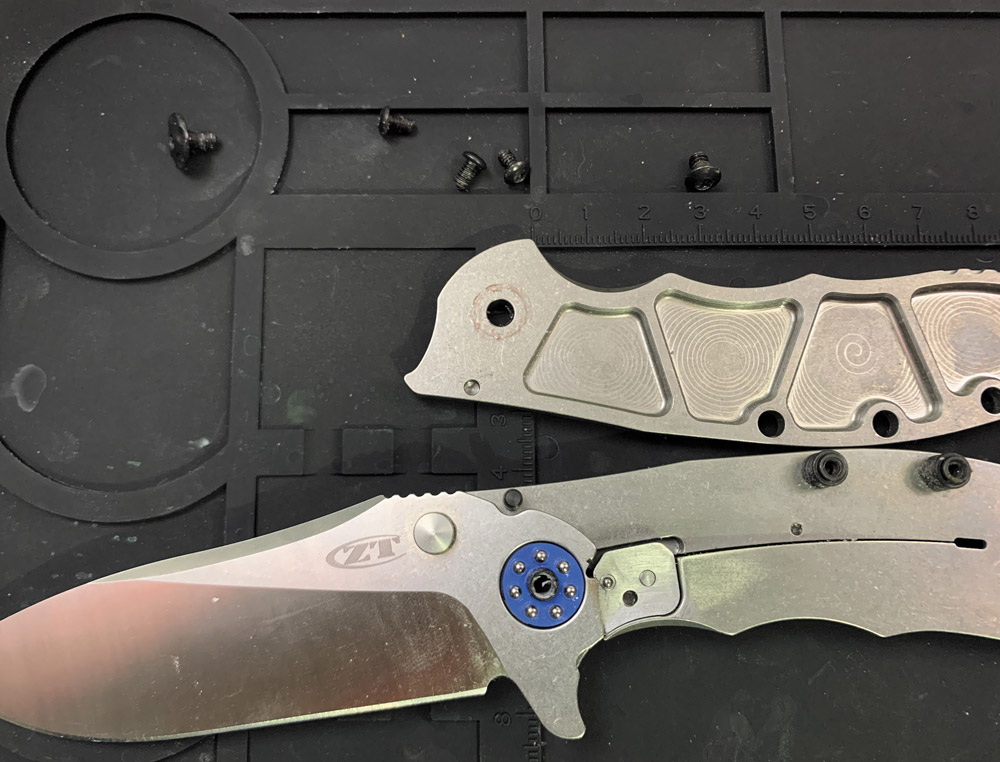 A good rubber mat is essential so that your screws don’t go bouncing around all over your work area.

Here’s a knife maintenance detail that people don’t often remember: Screws bounce! And they usually seek out the tiniest crevices of your work area once they finally come to rest.

A rubber working service mat will go a long ways towards alleviating that and will spare you hours and hours of crawling around your floor on your hands and knees like Gollum searching for his Precious while shouting enough swear words to make the raunchiest comedians in the world say, “Hey, calm down, buddy!” No one wants to see that. Especially your wife.

I use a simple mat designed for people working on small electronics that I got off of Amazon. I like it because it has short dividers to put screws and pivots and whatnot into, where I know they won’t roll around in case there’s an earthquake or a cat attack. (The latter is more likely since I live in New York.) I don’t have a particular brand favorite here, but several companies such as Hogue, Benchmade and Spyderco sell their own from time-to-time, if you want to be brand-loyal.

So that’s it! This won’t be all you ever need, but it will get you started and be a good base to build from in the future. As your hobby grows, you’ll surely want to customize your toolkit to your needs. Every knife is different and each one needs its own special sort of love.

Here are a few of the products mentioned in this article:

If you want to know how much this is all going to damage your bank account, here’s a quick rundown.