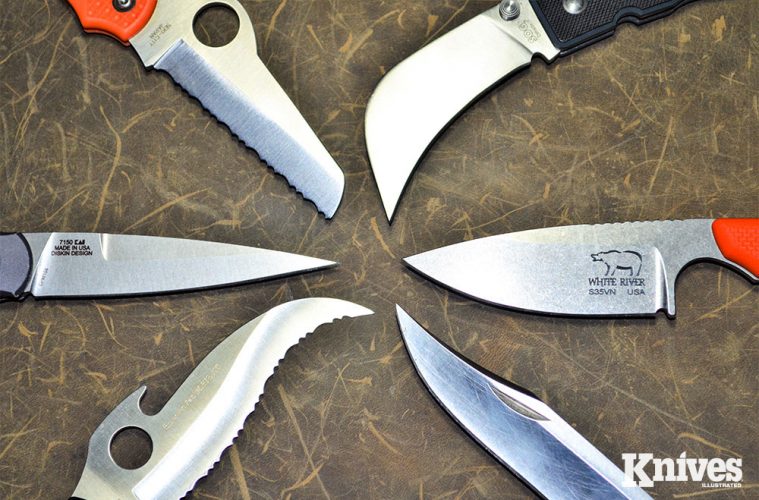 Most common blade profiles and how to choose the best

CHOOSE A BLADE PROFILE THAT FITS THE WORK TO BE DONE

From the time the first caveman realized a chipped bit of obsidian could be used to remove skin and meat from animals they harvested, humans have sought to improve on the basic design of that sharp edge.

For some collectors, the shape of the blade, often called the blade’s profile, is primarily a matter of aesthetics. They might purchase a specific knife simply because they don’t have a hawkbill or trailing-point knife in their collection yet. And there’s absolutely nothing wrong with that approach in the least.

“…at the end of the day what matters is whether the knife will perform its job well.”

Others, though, buy a knife because it is designed to tackle a certain task or range of chores efficiently and effectively. This is largely determined by the profile of the blade.

Once you strip away all the fun stuff, such as exotic handle scales and intricately detailed sheath designs, at the end of the day what matters is whether the knife will perform its job well. Thus, it is important to understand what various profiles are designed to do most effectively.

Let’s take a look at some of the most common blade profiles and the types of jobs in which they truly excel. 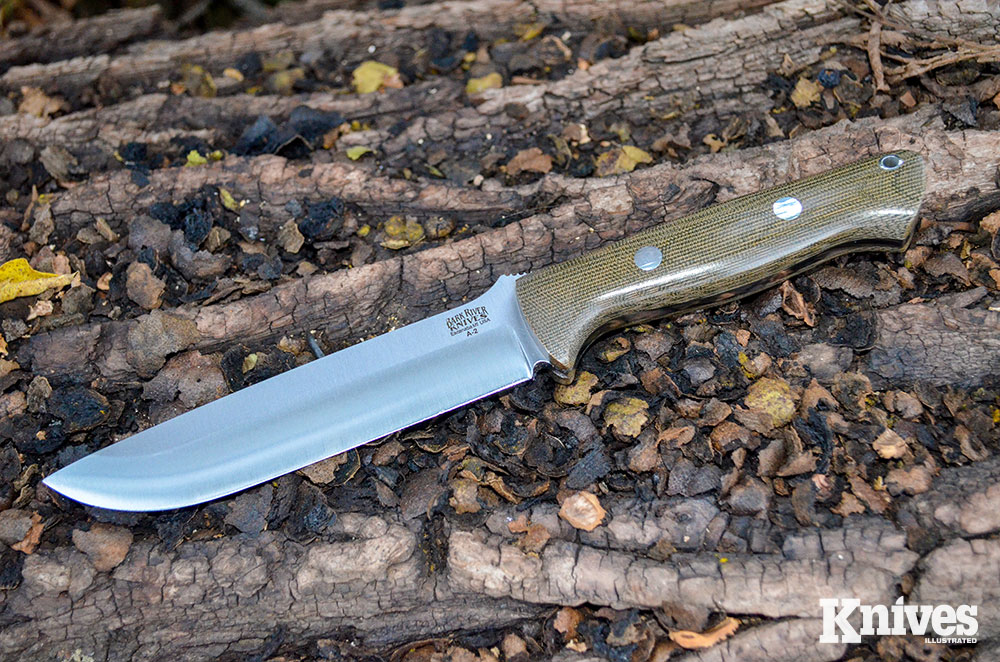 The Bravo 1.5 from Bark River Knives is an example of a straight-back blade.

This is about as simple as it gets when it comes to knife design. The spine is straight, or very nearly so, while the edge curves up to meet it at the blade’s tip. This style of knife is great for chopping as well as cutting.

Often, the spine is fairly thick, which works well for those who like to baton their firewood or use their free hand to apply additional pressure to make a push cut. However, there is a tendency for some makers to go overboard with this, resulting in what amounts to a sharpened crowbar.

An example of a drop-point blade is this Model 1 from White River Knife & Tool.

This is one of the most popular blade profiles on the market today, and for good reason. It will do just about anything reasonably well. The spine extends straight out from the handle, then dips down to meet the sharpened edge.

While it has been around for a long time, it was celebrated knifemaker Bob Loveless who really popularized it, beginning in the 1950s, and that popularity has continued through today.

The design offers a strong tip while keeping it easy to control. Because the tip drops down below the spine, there is less chance of puncturing anything you don’t want to when butchering or field dressing game.

This Model 110 from Buck Knives is an example of a clip point blade.

When you hear someone talk about a Bowie knife, this is typically the blade shape they’re describing. The blade looks as though a portion of it was removed, or clipped, from the spine just behind the tip.

Often, this runs for about a third of the total blade length. This area of the blade may or may not be sharpened. Either way, this design results in a needle-sharp point that is excellent for penetration while the edge has plenty of belly for slicing. 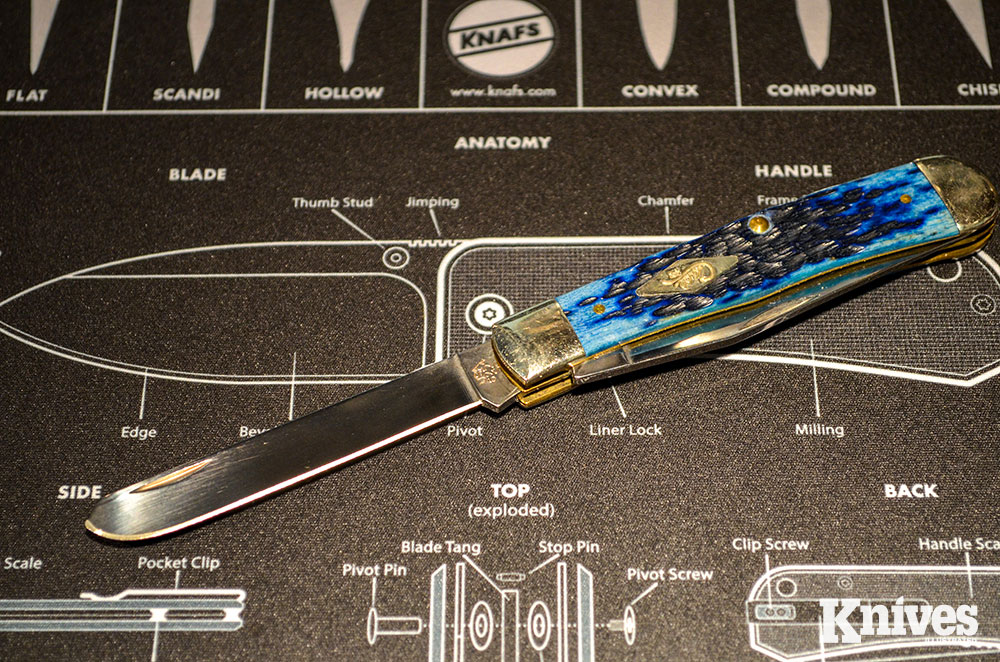 An example of a spey blade is this trapper from Case Knives.

Seen almost exclusively on folding knives, this is an old design that might be sort of a kissing cousin to the clip point. As the spine nears the blade’s tip, it dips down at a dramatic angle to meet the edge as it curves upward. As a practical matter, this means the point isn’t likely to accidentally penetrate anything as you work.

Originally, this style was designed for use in neutering animals around the homestead. Today, you find them mostly on two- or three-bladed folding knives. 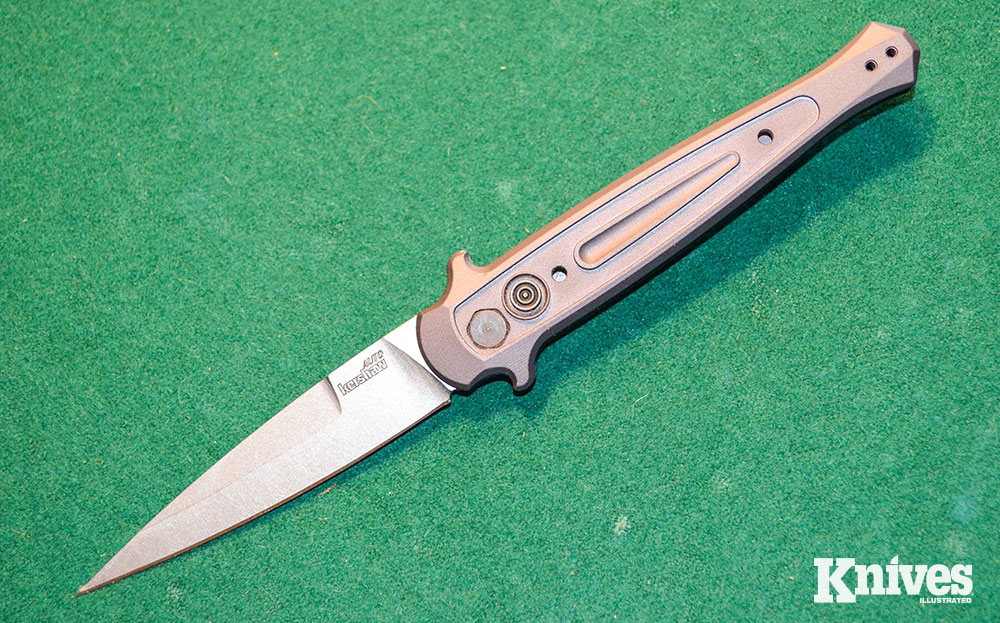 An example of a spear blade is this Launch 8 from Kershaw Knives.

Some people call this profile a dagger, which is a fair statement and is what most folks would probably think of when they see this shape. The top and bottom of the blade go straight from the handle, and then curve to meet each other at the center.

Traditionally, both edges are sharpened, though that’s not always the case. Some models will leave the top edge unsharpened so the knife can be legally carried. This knife has one primary purpose and that’s combat.

It is designed for stabbing and thrusting. Thus, you’ll see this on a tactical knife far more often than on something intended for field work. 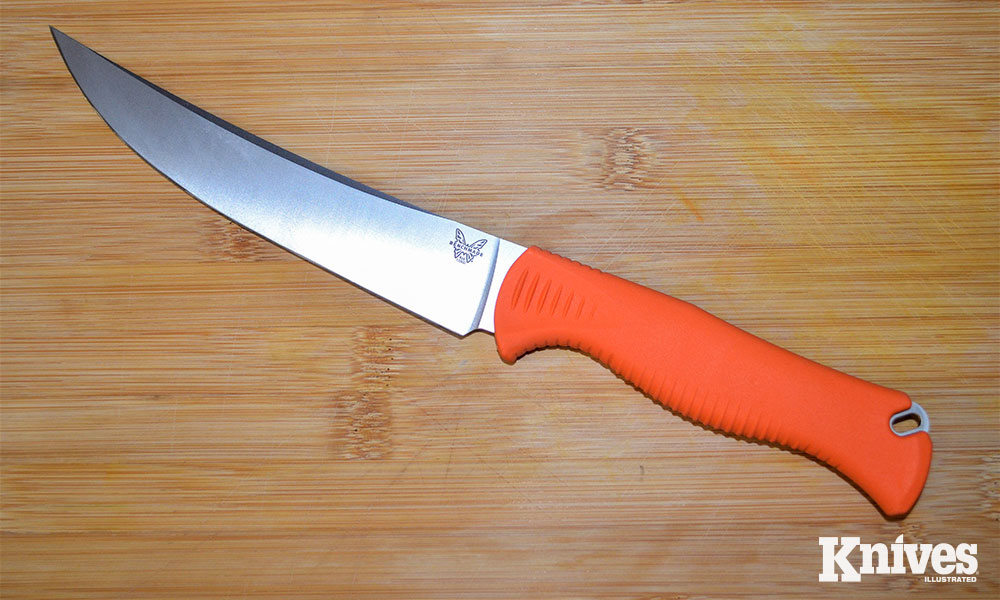 The Meatcrafter from Benchmade Knives is an example of a trailing-point blade.

This style of knife is suited particularly well for food prep, such as processing fish and small game. Both the spine and the edge curve upward at the end. This produces a long, sweeping belly that terminates in a very sharp point. Long, even slices are the hallmark of a trailing point knife. They are also sometimes seen in slashing weapons.

“…all knives are made to cut and most of them can perform a wide range of tasks in a pinch. However…it is always best to use the right tool for the job.” 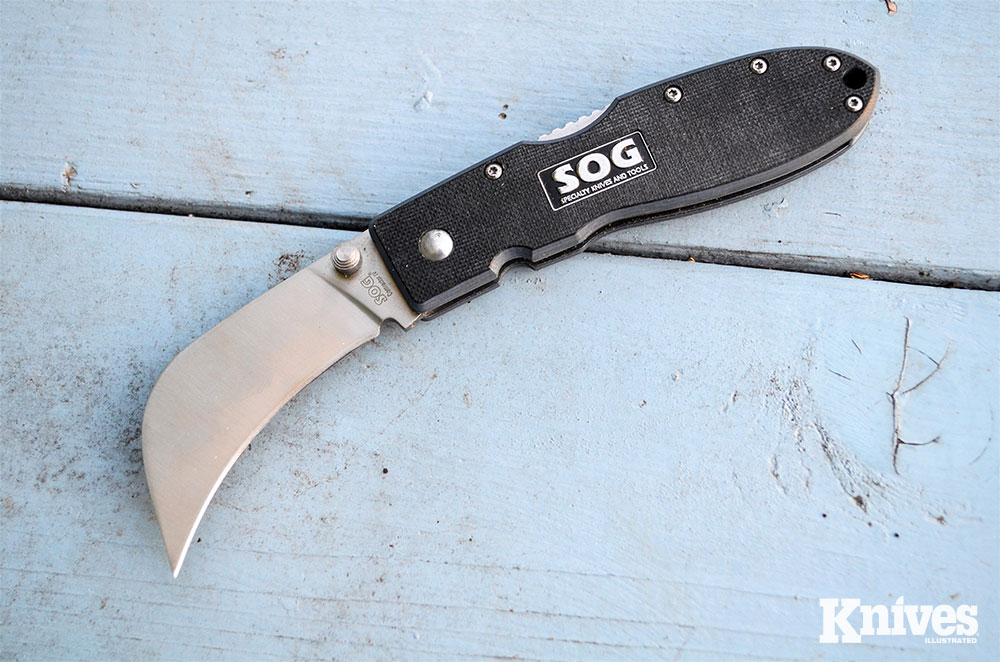 The Contractor IV from SOG is an example of a hawkbill blade.

Where the trailing point curves up, the hawkbill curves down, with a concave shape to the blade. It looks more than a little like a claw or talon. As you pull the knife across the material being cut, the blade bites deeply.

We see this sort of blade profile on some garden implements as well as shop tools, such as for cutting carpet. However, due to how well the blade shape cuts, this is also a somewhat popular choice for defense weapons.

Owing to the advertising blitz from a certain company back in the 1980s, the tanto became a very popular blade style among the tactical set. Demonstrations of the knife going through car doors and other objects illustrated the power of the tanto’s point.

This Americanized version of the traditional design features the blade’s edge turning upward at a sharp angle to the spine. While this certainly lends a great amount of strength to the tip, it also makes the blade difficult for some to sharpen.

This Spyderco Rescue 79 mm from Spyderco is an example of a sheepsfoot blade.

Once upon a time, this was a knife styled for trimming hooves, hence the name. It features a straight edge and straight spine that meet at an unsharpened tip. The idea was to be able to hold the knife’s blade and use it without worrying about getting stabbed by the point.

Today, we see this style on any number of knives intended for first responders and other rescue workers. The reason is that it can be used to cut seat belts and such without having to worry about accidentally penetrating the victim’s body parts. 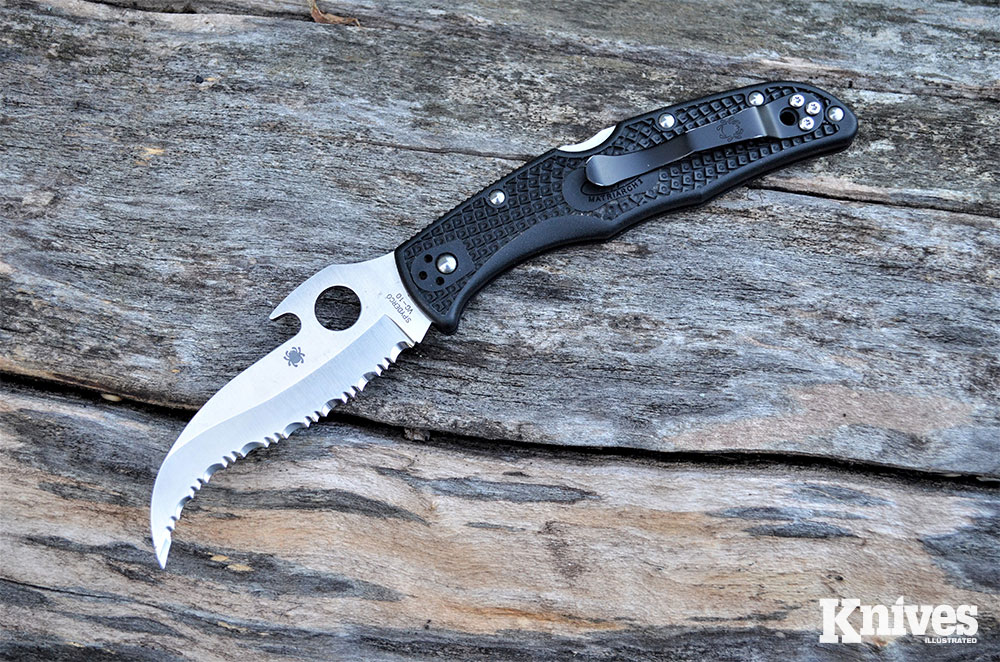 Perhaps most often seen in the Spyderco line, this blade profile has but one use, and that’s to slice and slash an opponent in a defense situation. You’re not using this to break down cardboard boxes at work, nor are you likely to find a use for it in the kitchen.

The design packs more cutting edge into the blade than just about any other knife profile, due to the sweeping curves. A friend’s daughter refers to this type of knife as “Mister Nasty” and she isn’t wrong. 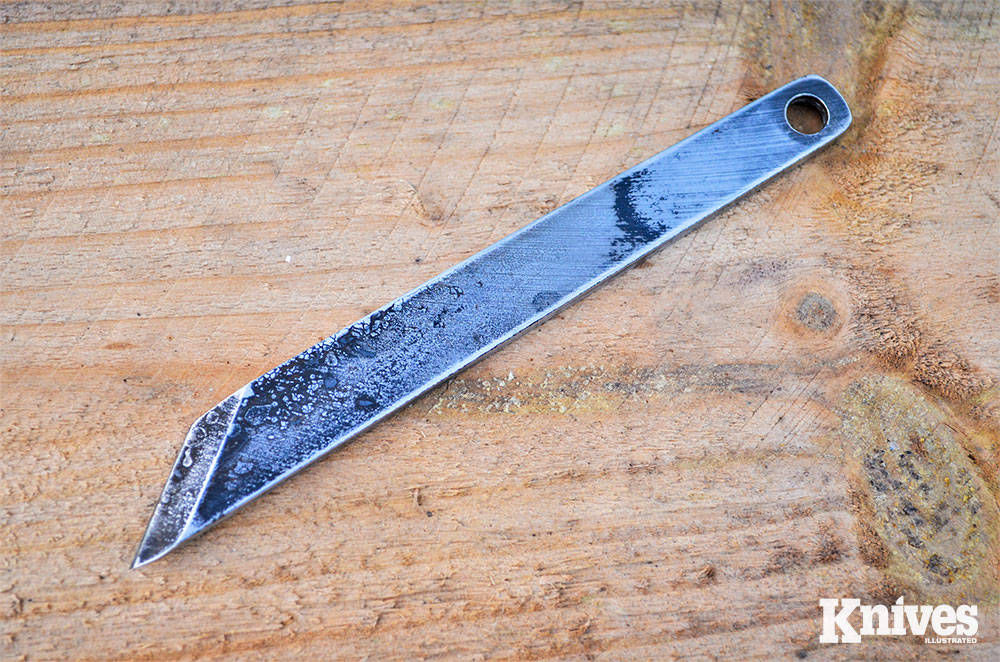 This kiridashi made by Bright Forest Forge is an example of a chisel blade.

Technically, this is more of a grind than it is a blade profile, but it straddles the line close enough to be included here. One side of the blade is flat, the other is sharpened. As the name may suggest, it excels with woodworking, though you can find some kitchen knives with this edge. There are also a few tactical-oriented knives with this sort of blade profile.

The example shown here is a kiridashi made by Bright Forest Forge in central Wisconsin. This is a Japanese design and an all-purpose utility knife used for everything from sharpening pencils in school to crafting with bamboo.

At the end of the day, all knives are made to cut and most of them can perform a wide range of tasks in a pinch. However, if you have the luxury of doing so, it is always best to use the right tool for the job.

This means not trying to carve a figure-four trap trigger with a knife that’s designed primarily for food prep, for example. It is sort of like emptying your 401k account to buy lottery tickets. Just because you can do something, doesn’t make it a good idea.

A version of this article first appeared in the Jan/Feb 2022 print issue of Knives Illustrated.