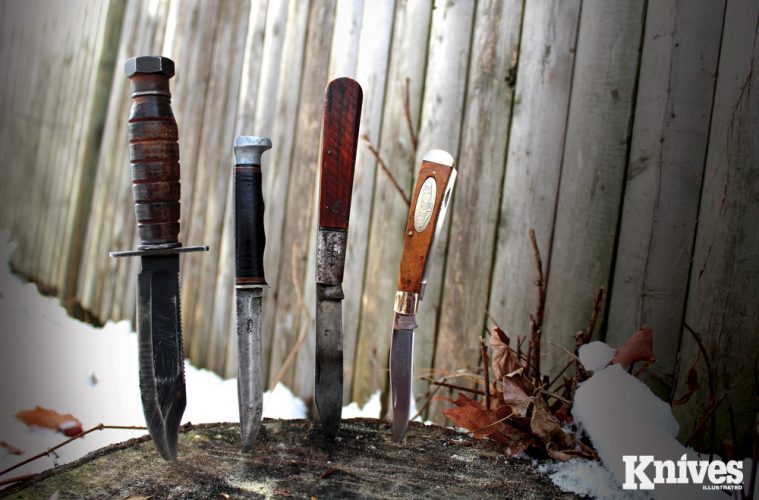 Without a doubt, there are some really great collectible knives and blades being made today.

Many of the articles being written today focus on the new blades that are coming out—and rightfully so—but there are some blades that will forever hold a special place in our hearts.

These are knives that might (or might not) have a dollar value attached to them. Some are knives whose entire value is only known to the owner … that sentimental value.

We all remember our first knife. It is like your first girlfriend (or boyfriend). In my case, it was a cheap pocket knife given to me by my father. That was more than 50 years ago, back in a time when no self-respecting boy would ever be caught dead without a pocketknife.

“These are knives that might (or might not) have a dollar value attached to them. Some are knives whose entire value is only known to the owner … that sentimental value. “

My father taught me how to safely use the knife … and emphasized what would happen to me if I ever pulled it on anyone. That lesson was driven home one day by the loss of the knife and a cuff upside the head. That knife is long gone, but the memories are still with me.

My first “real” Collectible knife was given to me by my Great-uncle Dana, the man I am named after. Uncle Dana was my father’s uncle and was old when I first met him.

He didn’t have any sons but was an avid outdoorsman with a love for hunting and fishing—something his daughter had no interest in. Uncle Dana took me under his wing and began teaching me skills I still draw upon today. 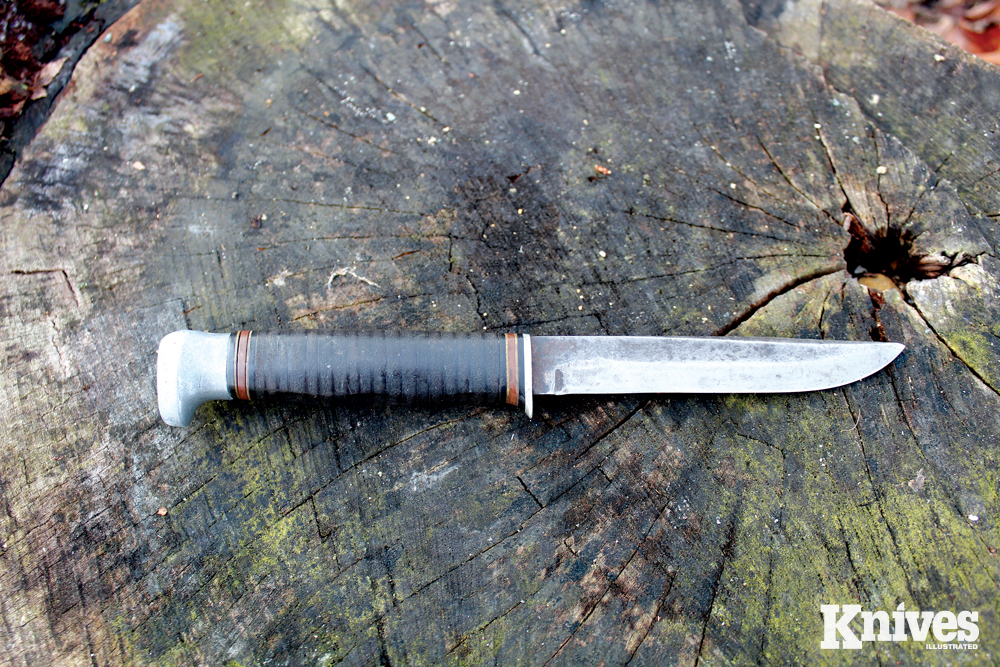 KA-BAR Little Finn. This is the knife given to me by my Great-uncle Dana when I was about 8 years old. It was my first “real” knife.

One day, as we went through our lessons, he reached into his gear and pulled out a knife. It was an old KA-BAR Little Finn. He handed me the knife and said, “You are ready to have this.” It had no sheath and had seen its fair share of use, but it was as sharp as a razor.

I was about 8 years old at the time. That collectible knife became one of my most cherished possessions. For many years, I carried that knife on many a hunting and fishing trip. Sadly, Uncle Dana passed away while I was in the Army, but that knife is still with me, as are the memories and stories.

My Little Finn is an old knife; as such, there isn’t a great deal of information available. KA-BAR now makes the Little Finn in Taiwan, so it isn’t fair to compare the two. While the specifications are the same, they are not the same knives. KA-BAR was able to give me some information, but it could not give me everything I would have liked to know.

This collectible knife is what it is—a piece of American history. In turn, it is part of mine.

I enlisted in the U.S. Army when I turned 17. The Army wanted me to get into some sort of tech job (due to my high test scores), but I opted for combat arms.

When I got my orders for the 25th ID, my mom wanted me to be safe and apparently have the ability to tell time—she bought me a really nice watch (which I lost during an airmobile mission) and a knife. It was an OKC 499 Survival knife. Like any wild-eyed kid, I had to name the Collectible knife; I named it “Ralph.”

“We all remember our first knife. It is like your first girlfriend (or boyfriend). In my case, it was a cheap pocketknife given to me by my father.” 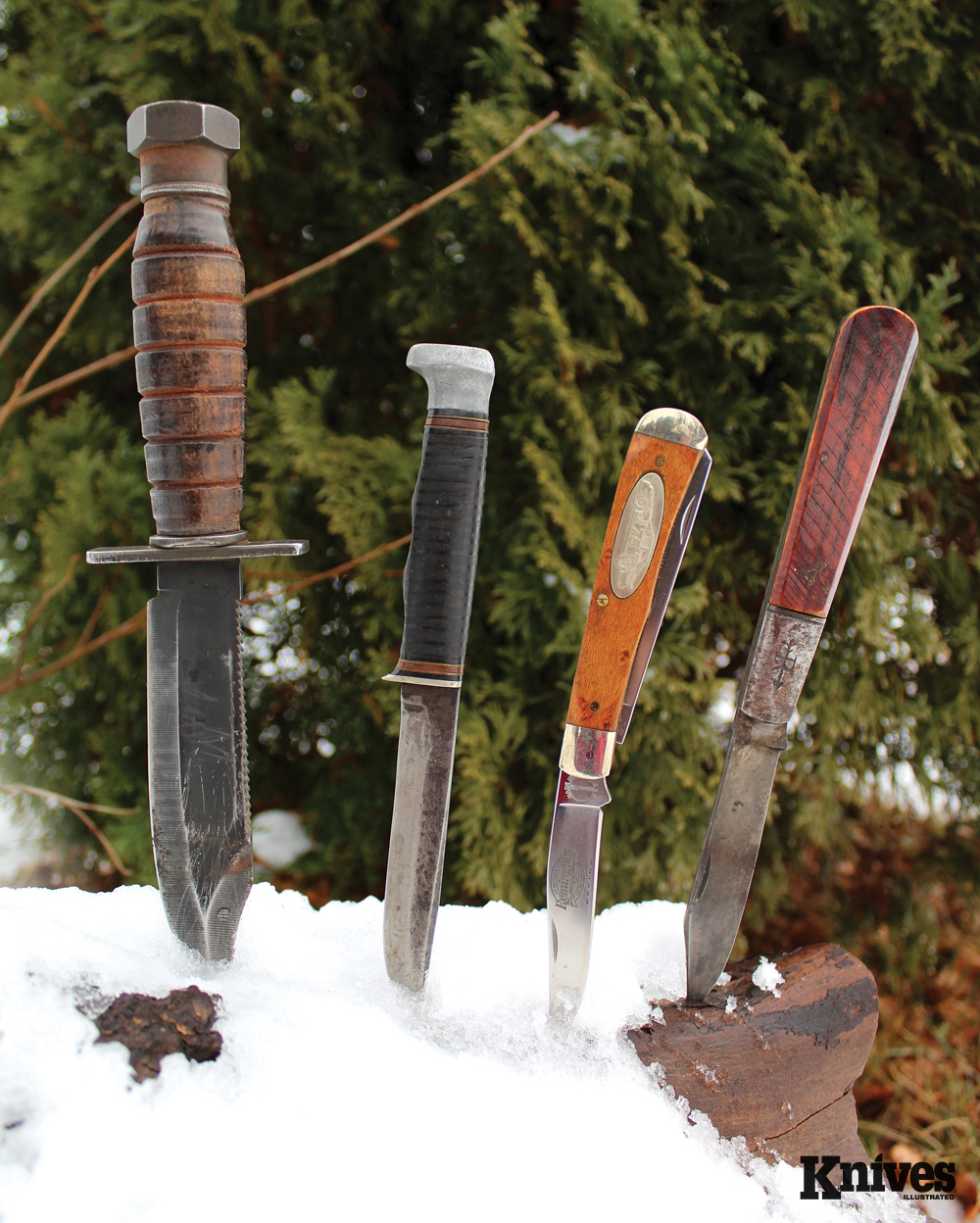 Ralph stayed strapped to my web gear. If I had down time, I spent it cleaning and sharpening Ralph. That collectible knife was always ready in case I ever needed it. I became known among some of the other men by my knife; and nobody asked to borrow it.

OKC 499. This knife served the author well during 10 years of military service. The stories it could tell (The author is glad it can’t talk!).

Ralph has a carbon-steel blade that really holds an edge. That knife was always with me during the 10-plus years I spent in the military. After that, it served as my hunting/bush knife. I have since retired Ralph. It served me well, and I still clean and sharpen it on a regular basis.

Ontario Knife Company (OKC) has been making the 499 for decades, and it has been carried by U.S. military personal the entire time. The Blade is 50-55 HRC that keeps an extremely sharp edge.

The collectible knife has an overall length of 9.5 inches, and the blade has a flat grind on the primary bevel and a swedge at the tip. The knife comes with a heavy leather sheath complete with a small sharpening stone.

As a kid, my favorite uncle was my Uncle Bob. I would often spend the summers with him and my Aunt Connie. Uncle Bob knew everything (to my mind, anyway) and showed me all sorts of cool things.

He would take me places and teach me valuable lessons (although I didn’t know it at the time). Above all, Uncle Bob carried a large folding knife in his pocket wherever we went. He always said, “You just never know when you will need a collectible knife.” 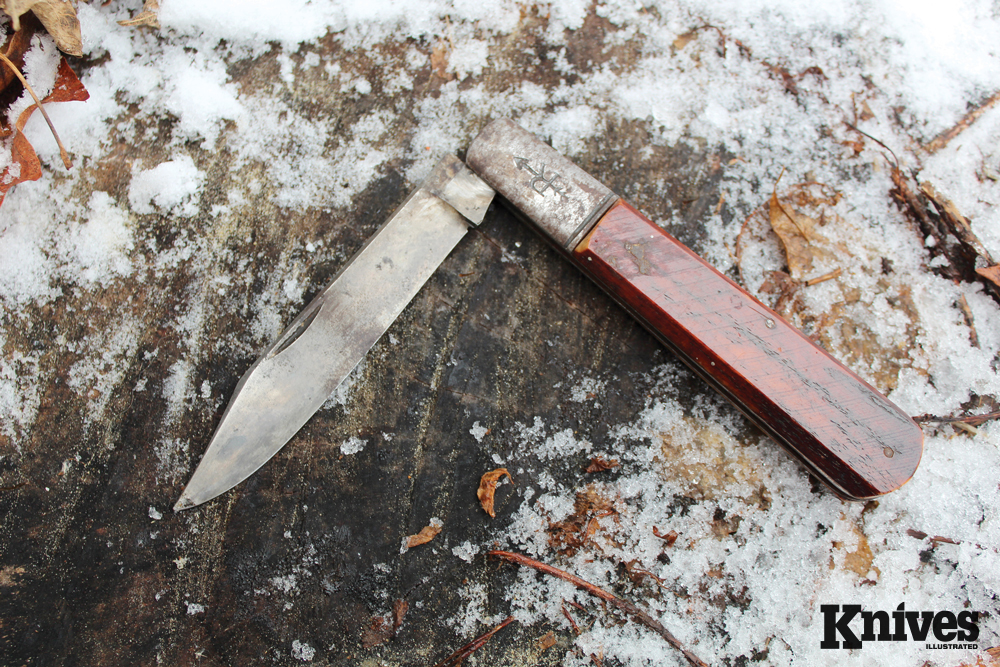 Russell Barlow folding knife. This is the knife carried by my Uncle Bob. It was given to me when he passed away.

I was grown and had a family of my own when my Uncle Bob died. My Aunt Connie asked me to come up to the house in Maine and help clean out some of his things. He was a survivalist at heart (or perhaps just a pack rat) and never threw anything out … “just in case.”

When I arrived, my aunt pulled me aside, handed me something and said, “Your Uncle Bob wanted you to have this.” In a box was an old Russell Barlow Straight Line bone-handled folding knife.

This was the very same collectible knife he always carried. While the bone handle had darkened with age and use, the single blade still came out the same as on the day it was made, and it keeps an edge like no other knife I own. 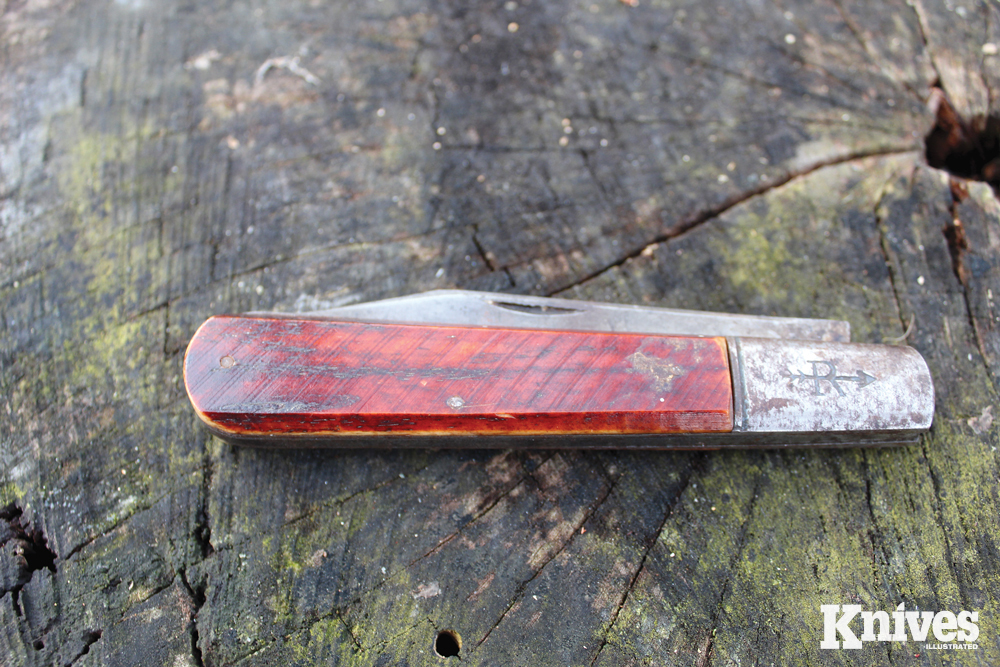 Notice the “R” with the arrow. The handle is bone, although it has darkened with age and use.

There was one stipulation that came with the knife: “Your Uncle Bob wanted you to use the knife, not just put it on a shelf,” my aunt told me.

In honor of his request, I do occasionally take the collectible knife out with me, and it has been used to clean a trout or two. Every time I use it, my Uncle Bob is there with me, giving me instructions, as he always did.

My Russell Barlow knife was made by the Russell Harrington Cutlery Company (Massachusetts) sometime in the late 1800s. These knives were designed to be both tough and affordable. They came as both single- and double-blade models. Mine has a single blade. The blades were made from high-carbon steel and the handles of unpolished bone.

Folded, the knife measures 5 inches, with an overall length of 9 inches. The handle is teardrop shaped and has a large, thick bolster. The maker’s mark is an upper-case “R” with an arrow through it.

Son to Father, Father to Son

The last knife is one that has never been used—and it never will be. It is still in the original box. This collectible knife was one that I gave to my father, and upon his death, I took back. He loved this knife, and that is why it was never used. It spent its days in a drawer with all those other things I had given him over the past 56 years.

“In a box was an old Russell Barlow Straight Line bone-handled folding knife … While the bone handle had darkened with age and use, the single blade still came out the same as on the day it was made, and it keeps an edge like no other knife I own.”

Back in the 1960s and ’70s, my father used to race cars, and even when his racing days were over, he remained a big NASCAR (later to become the Winston Cup) fan. Although we have a track right here in New Hampshire, he had never been to a professional NASCAR race.

Having had contacts at Remington, which sponsored a car, I reached out and managed to secure two tickets to the race—complete with meet-and-greet passes. I’ve never seen my dad so happy. However, little did he know I had another gift for him.

Remington pocket knife. This is the knife the author gave to his father when he took him to the races.

Remember when I started this article by saying that my father gave me my first knife? Well, it was time to return the favor. I was able to get my hands on one of the Remington Racing knives.

This pocketknife has two blades, with the main blade having the Remington Racing Team insignia on it. On the wood handle is the image of the #75 Remington Ford.

My father was really tough on knives, so it made me both happy and sad to see that this knife had never been used. He thought enough of this collectible knife to keep it in a special place. He never expressed his feelings, but this made up for all those times I thought he was hard on me and didn’t care.

To this day, when I pick up this knife, I remember spending the day with my father at the races. After all he had done for me, it was great to put a smile on his face.

For me, knives have always been tools. I don’t collect knives. As with hammers and screwdrivers, there is a right collectible knife for the job. My father always told me to buy the best tools you can afford. They might cost more up front, but you will only need to buy them once.

Some tools, such as these knives, have lasted many lifetimes. They all have stories to tell; and a few of them (such as my OKC) have stories some people would not like to hear.

All have a sentimental value that far exceeds any dollar figure you could put on them. These knives represent parts of my life; they are part of me. For that reason, they will always have a special place in my heart.

I reached out to Remington to see what I could find out about this collectible knife, but I didn’t find out much. This knife, in this configuration, was produced in the late 1990s and early 2000s, when Remington sponsored the #75 Ford Thunderbird driven by Rick Mast.

It is a two-bladed folder with a closed length of 4 inches and an overall length of 7.5 inches. The handle is wood. I know Remington did not make its own knives, but there are no maker marks other than the Remington name on the knife. 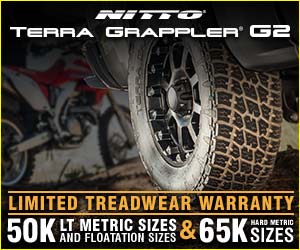 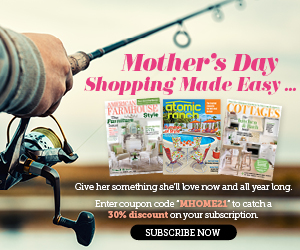