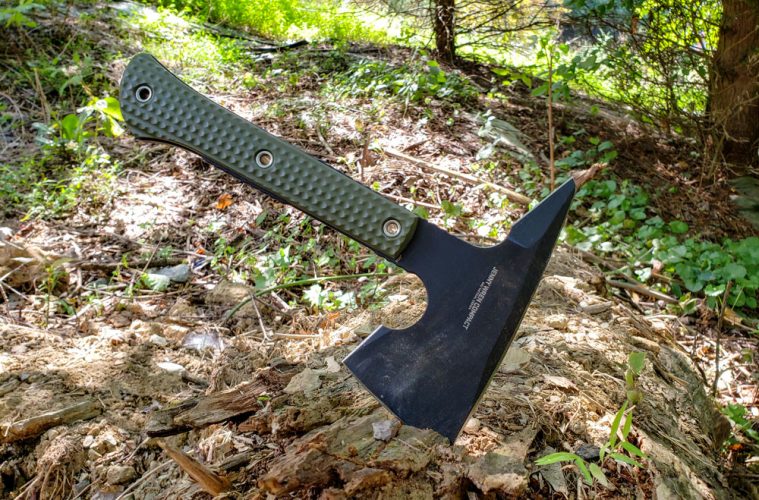 CRKT AND RMJ TACTICAL TEAM UP TO OFFER A RUGGED, AFFORDABLE CAMP TOOL AXE YOU CAN TAKE ANYWHERE

“This axe can strap easily to your belt or pack, or tuck away inside your kit on a snowmobile or ATV.”

I’m always a fan of collaborations between custom makers and knife factories. I see it as a win-win for all parties involved. For the consumer, you often get a chance to try a custom maker’s work either at a price you can more easily afford or without a long backlog waiting for custom work.

The makers get a chance to spread the word about their work and get it into the hands of people who might not otherwise have a chance to own one of their custom pieces.

The production companies get a feather in their cap by signing on a noted maker, which brings favorable attention to them.

And they generally get a good selling product with buzz already surrounding it due to the maker. 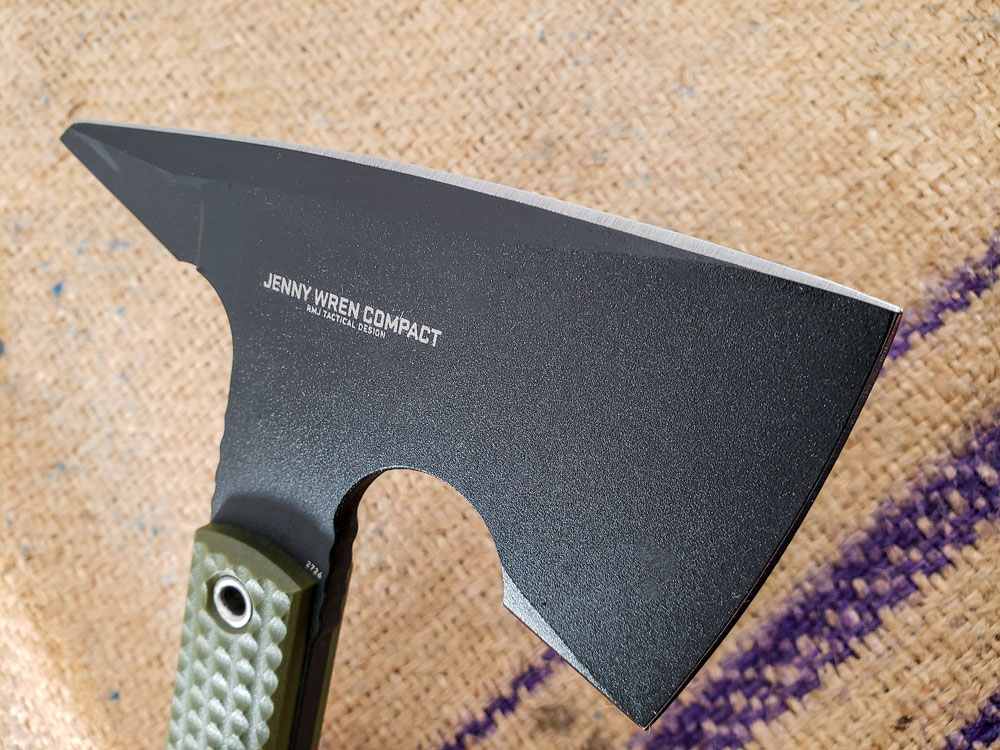 The Jenny Wren Compact is a woods tool designed by Ryan Johnson of RMJ Tactical and produced by Columbia River Knife and Tool. Made from SK-5 Carbon Steel with a powdercoat finish and fitted with glass reinforced nylon scales, it is a petite hawk at just over 9 inches in length and weighing in at only a little over a pound.

Are the factory pieces just as good as the custom models? Usually not. There’s usually some difference in materials to keep the costs down, and obviously you’re going from a handmade piece to a mass-produced machine product. But can they still be very good? Absolutely.

Keep in mind, the maker is putting his name on the piece, whether it’s his handmade version or a production version, and folks aren’t going to do that if it doesn’t meet their standards.

With all that said, one of those great collaborative relationships has been between Columbia River Knife and Tool and Ryan Johnson of RMJ Tactical.

CRKT and RMJ have done several models together, including a number of traditional wooden-handled tomahawks, a couple of modern tactical styles, a couple of knives, and even a kukri design.

The latest model, which we’re going to look at here, is the Jenny Wren Compact tomahawk. 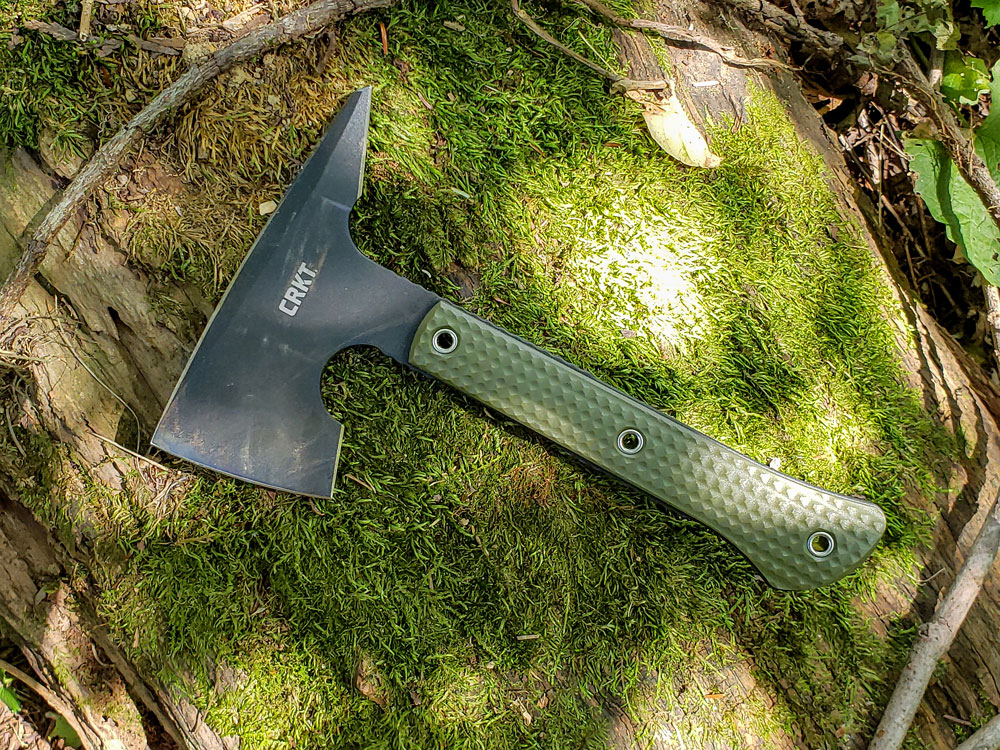 The Jenny Wren Compact is sharpened on the primary cutting edge, the spike, and the top of the head, allowing for a variety of cutting techniques and options. For example, the sharpened top edge can be used as a plane or scraper.

The Jenny Wren Compact is the smallest of the RMJ-designed hawks, but that doesn’t mean it isn’t functional. It just means it’s handy.

If you look at the RMJ Tactical website, it looks like the Jenny Wren is based on the Mini Jenny Spike hawk.

There are some minor dimensional differences according to CRKT’s specs, and obviously material differences, although my measurements actually put the Jenny Wren about the same as Mini Jenny.

As I’m writing this, the Mini is listed as discontinued, but some are still in stock. So, if you want an actual RMJ model, you better get moving. If you miss out or the RMJ isn’t in your budget, the CRKT version is fine rendition in its own right. 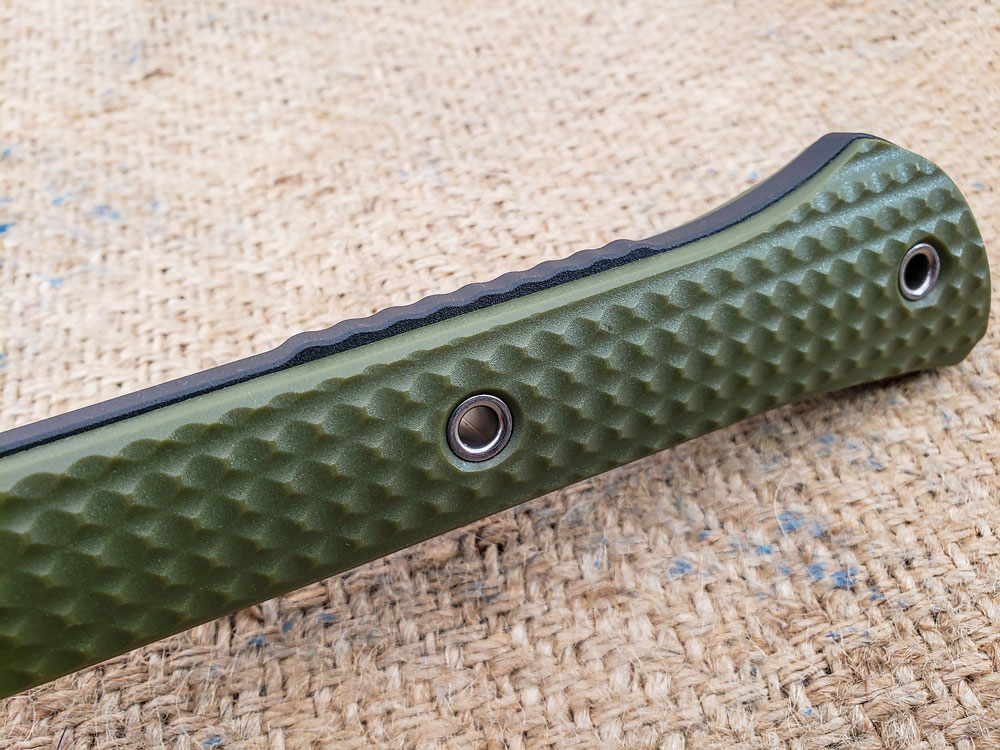 The Jenny Wren is made from a quarter-inch thick SK-5 carbon steel, which is a tough high-carbon steel roughly equivalent to 1084.

It’s a good choice for a hard-use tool, although it will require maintenance as with any other carbon steel. CRKT adds a black powdercoat that helps with corrosion resistance.

The hawk head has a bearded shape to it with a 2.59-inch cutting edge that lets you choke up on the handle and use the head for carving. This works especially well with the shorter axe handle.

The overall height, according to the spec sheet, is 10.03 inches, but my measurements show a touch over 9 ¼ inches. Of that, about 7 inches is handle, with 6 ½ inches of that being fitted with a set of checkered OD green glass-reinforced nylon handle scales affixed by a trio of rivets. 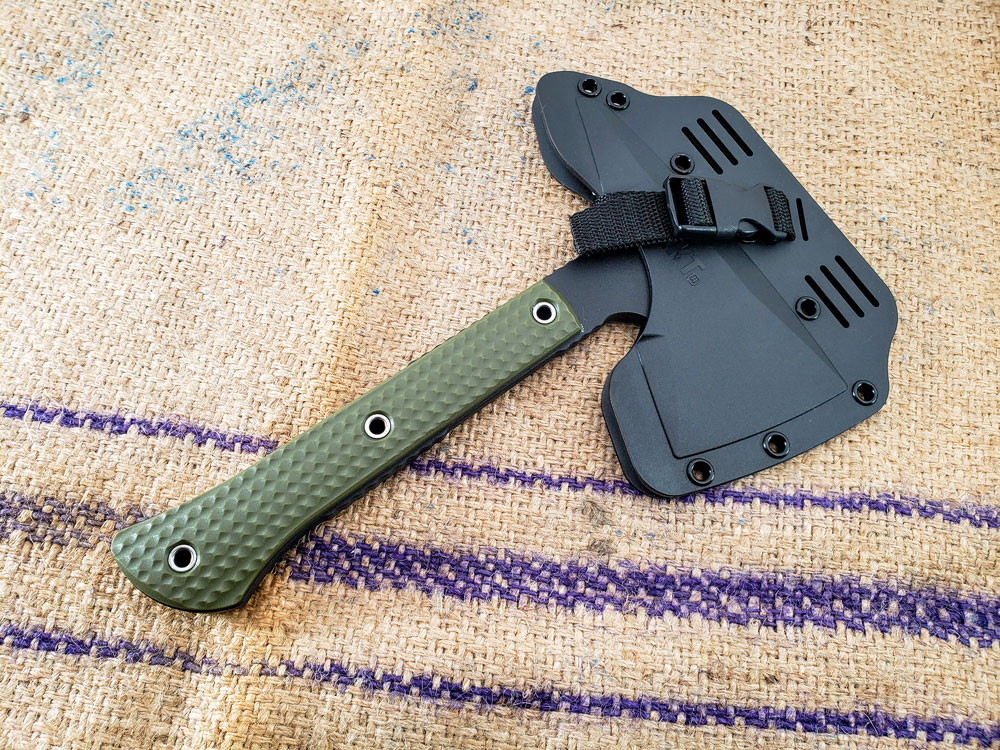 The Jenny Wren has a back spike on it, and it’s basically sharpened everywhere except behind the beard of the head where you choke up on the hawk.

Obviously, the primary edge is sharpened, but so is the base of the beard, the top and bottom of the spike, and the entire top edge of the hawk.

The head is etched with “CRKT” on one side and “Jenny Wren Compact” over “RMJ Tactical Design” on the other.

The hawk comes with a well-designed black, glass-reinforced nylon scabbard. The hawk snaps into the scabbard from below and is held in place by tension. A secondary web strap and buckle keep it secure during transport.

A number or slots and hollow rivets provide a wide variety of mounting points for you to strap the hawk to your pack, belt, or onto your ATV.

Its weight is 1.12 pounds with an additional 3.5 ounces added on for the scabbard. 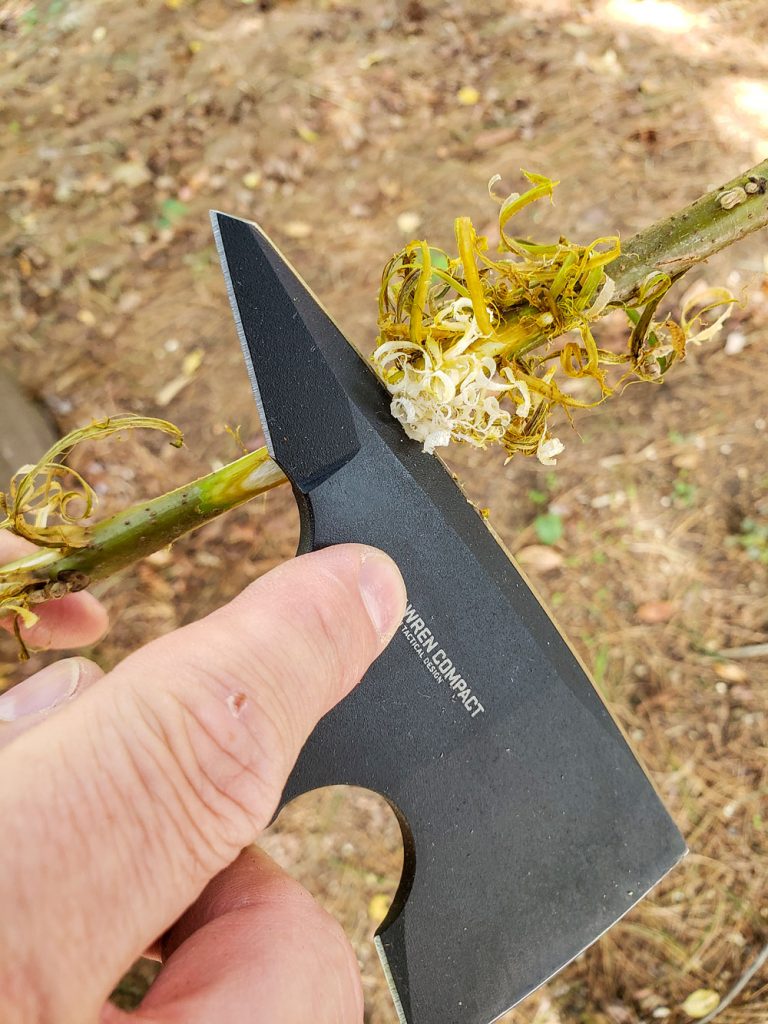 The MSRP on the Jenny Wren is $135, which is quite reasonable for an RMJ Tactical design.

If you take a look around, you’ll find street prices most places for under a C-note, making it an exceptional bargain.

JENNY IN THE WILD

So, what exactly is the purpose of the Jenny Wren? It’ not a traditional hawk by any means and not a thrower, although I guess you probably could do that.

Thinking about it, it may actually work well for that, but that’s not really its intended role. It’s also not a tactical hawk in the manner of being a backup weapon for urban or close-quarters combat such as RMJ’s bigger hawks.

Although again, I’m sure it could be pressed into service as such if needed. The main role I see the Jenny Wren filling is that of a general-purpose camp axe when space is an issue.

The axe size and features make it well suited to that role, even though it could pinch hit in some others as well.

The Wren can strap easily to your belt or pack, or tuck away inside your kit on a snowmobile or ATV. 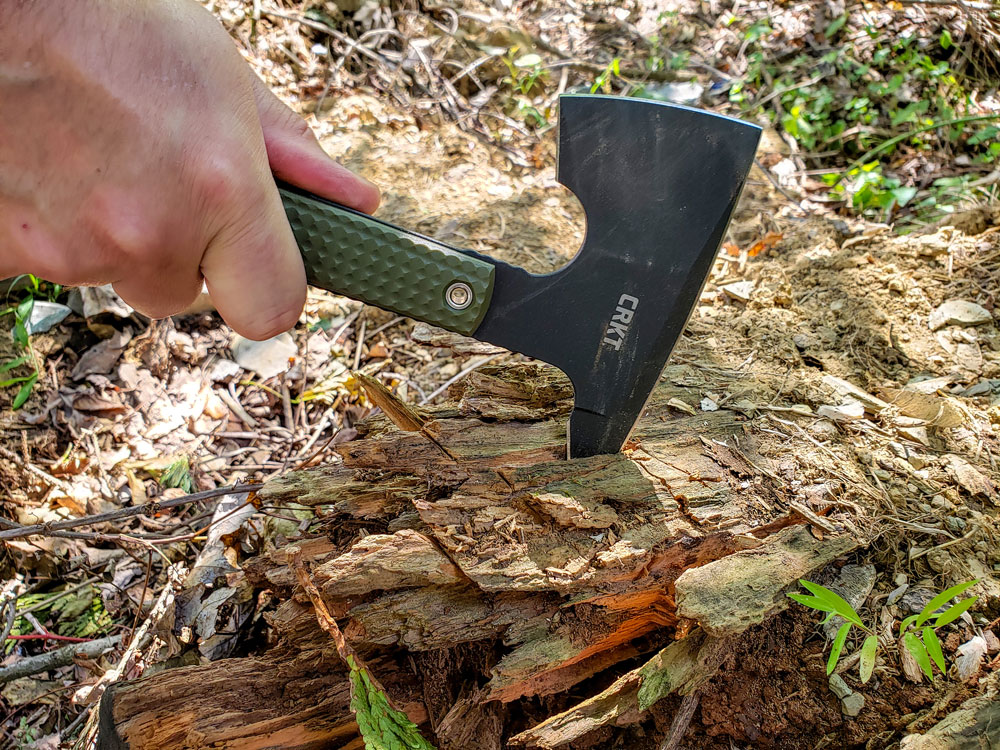 The sharpened back spike worked great for ripping open old logs for dry tinder and insects for fishing bait.

I think it makes a fantastic bushcraft axe too. It’s plenty of axe to make stakes or poles for crafting various camp furniture, cooking tripods, and things like that.

You can choke up on the hawk and use it for some of the carving work as well. The sharpened top edge makes a great plane, and I found it worked well for making fuzz sticks.

While the pommel spike is often looked at as a weapon on a tactical hawk, it also makes a great axe tool.

I used it to break open old stumps and logs, which is handy when looking for dry tinder or fatwood, or for insects to use for bait. It can be used for digging as well, if needed. 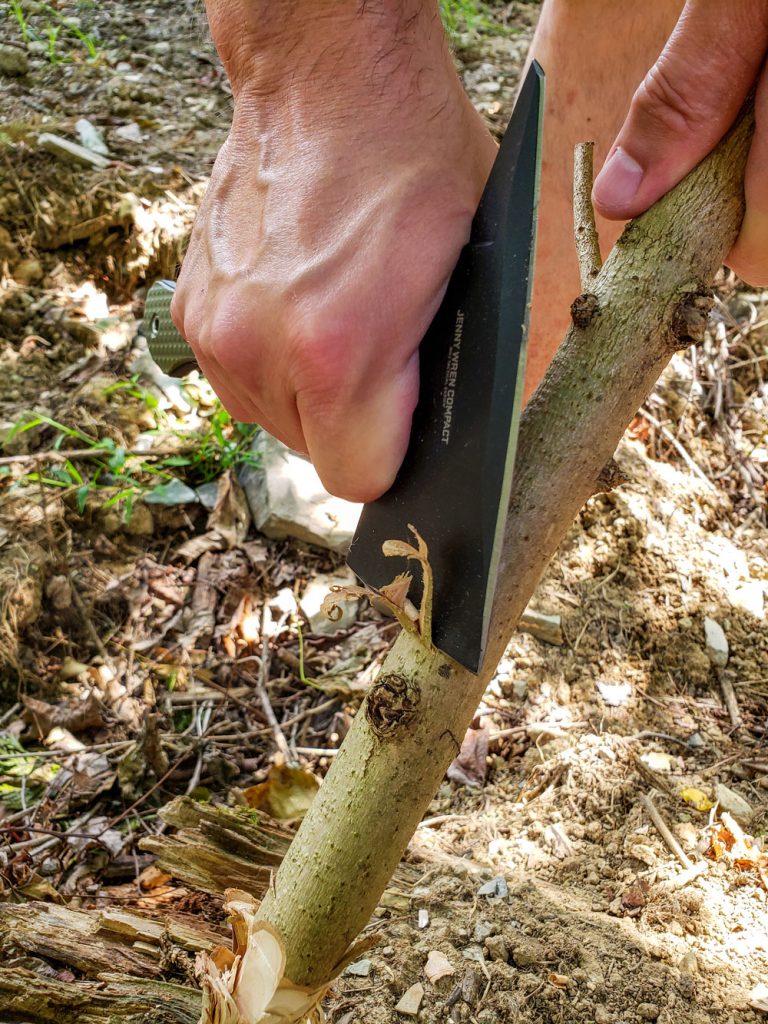 The undercut beard of the hawk allows you to choke up on the haft and use the axe for push cuts or for more delicate carving and cutting work.

The other thing I think the Jenny Wren axe would be handy for is hunting. It’s small enough to take with you easily. Also, it  would work well for clearing out branches around a tree stand to get better fields of fire or lines of sight.

It would also work well for breaking the breastbone and pelvic bone, or hacking through large joints if you’re breaking down something like an elk to pack it out and back to your vehicle.

While I initially just viewed the Jenny Wren as an outdoors axe, after working with it more I also realized it would make a good choice for a bug-out bag or urban get-back-home bag.

It’d tuck away easily in your pack and is tough enough to use to pop doors, break windows, and use for entry or egress in a disaster or urban unrest scenario.

If you need a rugged axe tool for a camp or survival setting the CRKT Jenny Wren Compact is an excellent axe choice.

Along with the quality build and manufacturing capacity, you also get the time proven design work of Ryan Johnson and RMJ Tactical.

You also get the expertise of Columbia River Knife and Tool that help make for an affordable product that will stand up to anything you’ll ask of it. KI 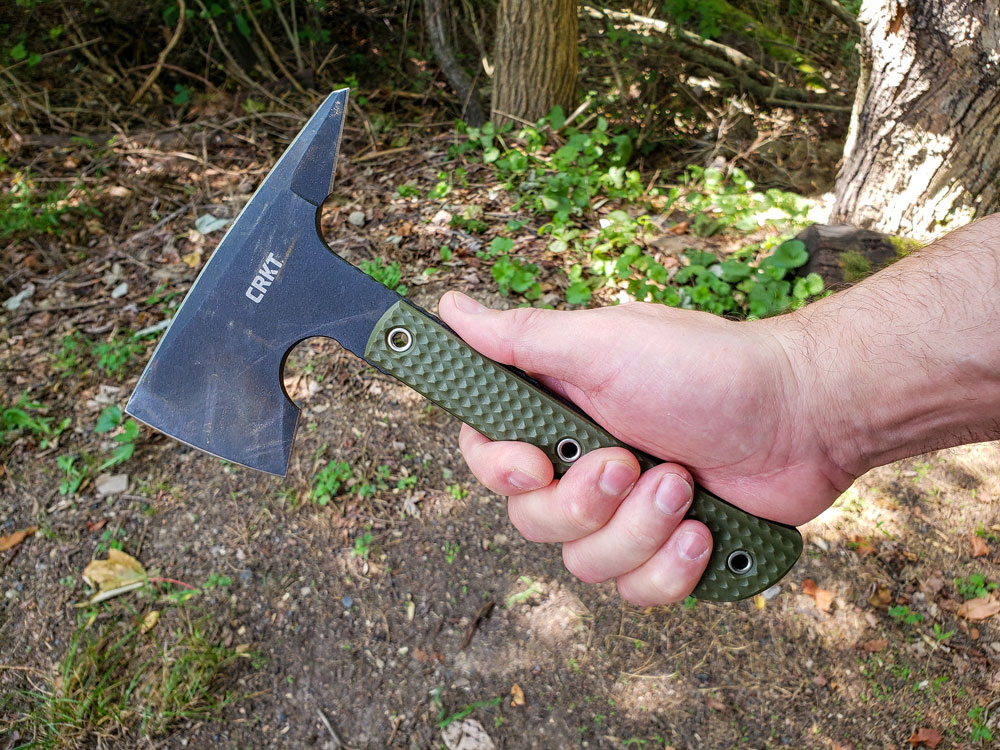 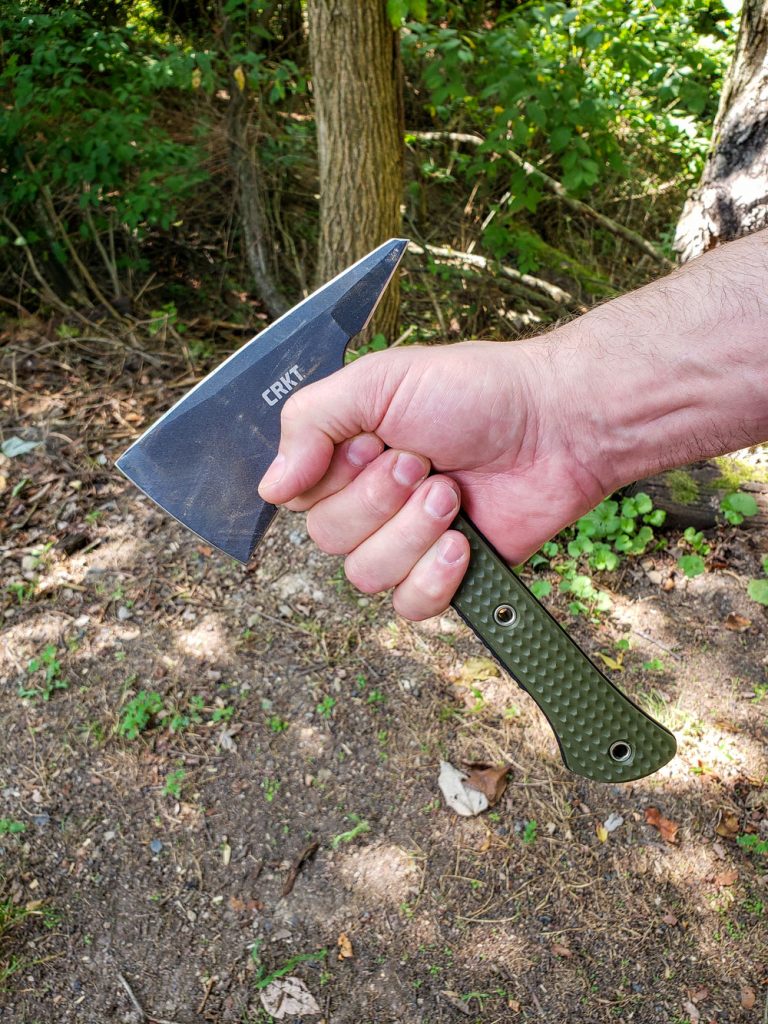 The CRKT Jenny Wren Compact is a handy tool that’s easy to use and balances well in the hand. Its undercut beard and well-designed handle make it easy to choke up on the haft.