If someone says, “fighting knife,” at least in the US, there’s a good chance that the classic KA-BAR Marine combat knife pops into your head. That doesn’t mean there isn’t room to innovate a trusty classic.

The KA-BAR has ridden on the hips of countless servicemen for nearly 80 years. It still soldiers on to this day.

Olean, New York-based KA-BAR Knives continues to update its designs and materials, giving end users at the tip of the spear even more options to use what suits them best. The latest example of that is the KA-BAR 1266 Modified Tanto.

“THE EXTRA LENGTH AND FINE POINT OF THE MODIFIED TANTO … MAKE IT A FINE COMBAT KNIFE …  SUITABLE TO SERVE ON FOR DECADES TO COME. ”

Unlike the classic clip point KA-BAR, the 1245 uses an 8-inch blade (as opposed to 7 inches) and an angled “American tanto” style point. KA-BAR calls the 1266 a “Modified Tanto” for two reasons.

First, it’s built off the same blade blanks as the 1245. Second, its blade profile is like a historical Japanese tanto, which is much less abrupt and angular than the 1245’s Americanized style. 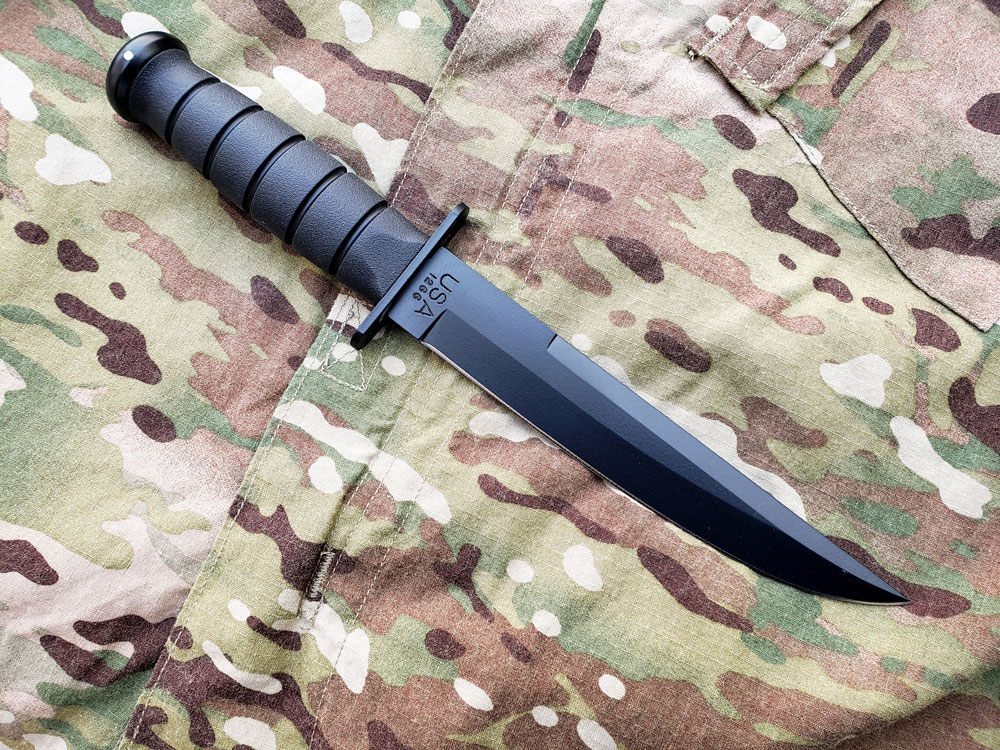 At more than a foot long of American made steel, the KA-BAR Modified Tanto is a formidable piece of combat gear. 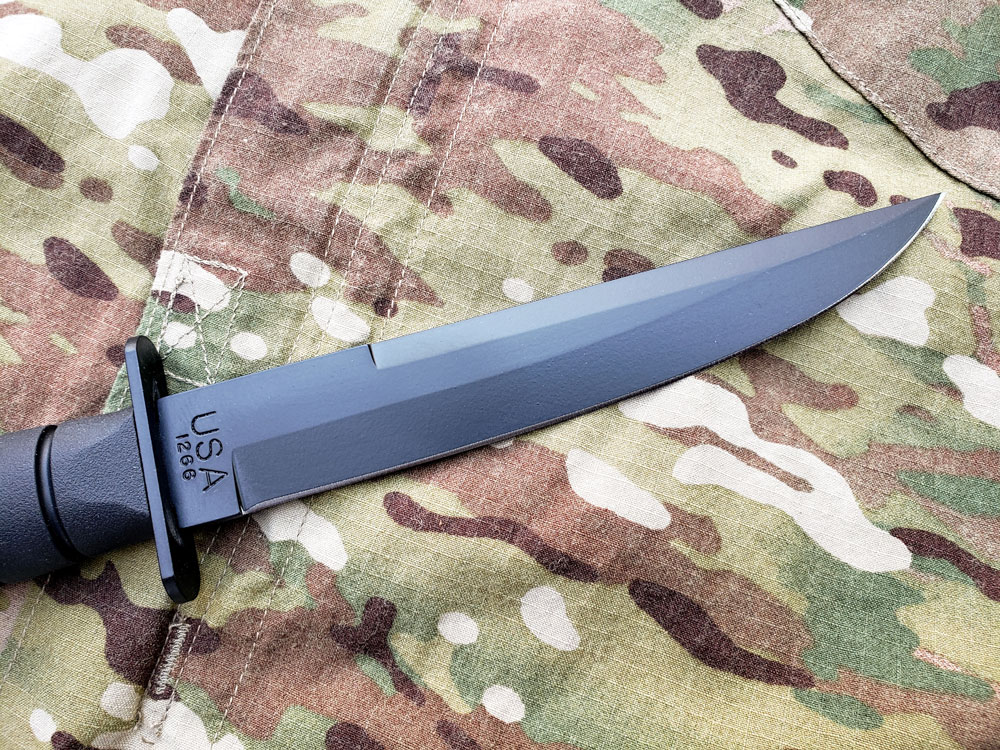 The steel is treated to a 56-58 Rockwell and has a flat grind with a long, false swedge that tapers to a keen point.

KA-BAR fits the 1266 with a synthetic Kraton G handle that mimics the style and handling of its stacked leather handles, but is much more resistant to the elements.

It has a through tang design, a pinned steel pommel, and a straight, steel double cross guard. 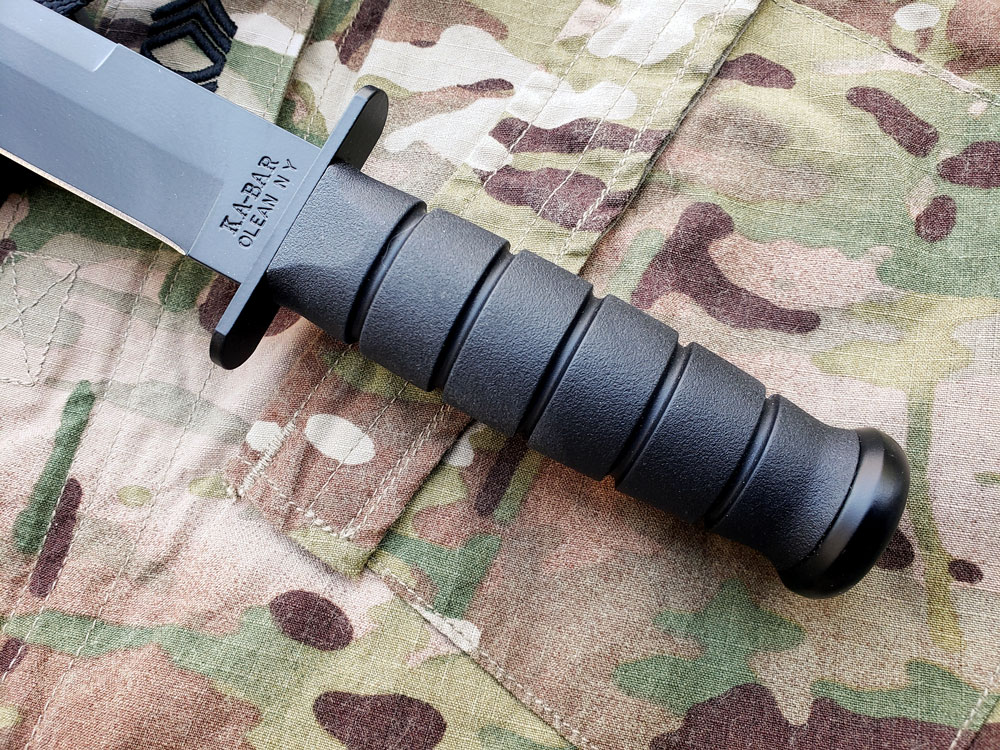 The Modified Tanto uses the same shape and style grip that has worked so well on KA-BARs for nearly eight decades but upgrades it with a modern, weather resistant Kraton material. The oval cross section with palm swell and five-grooved grip makes for a sure and comfortable handle. 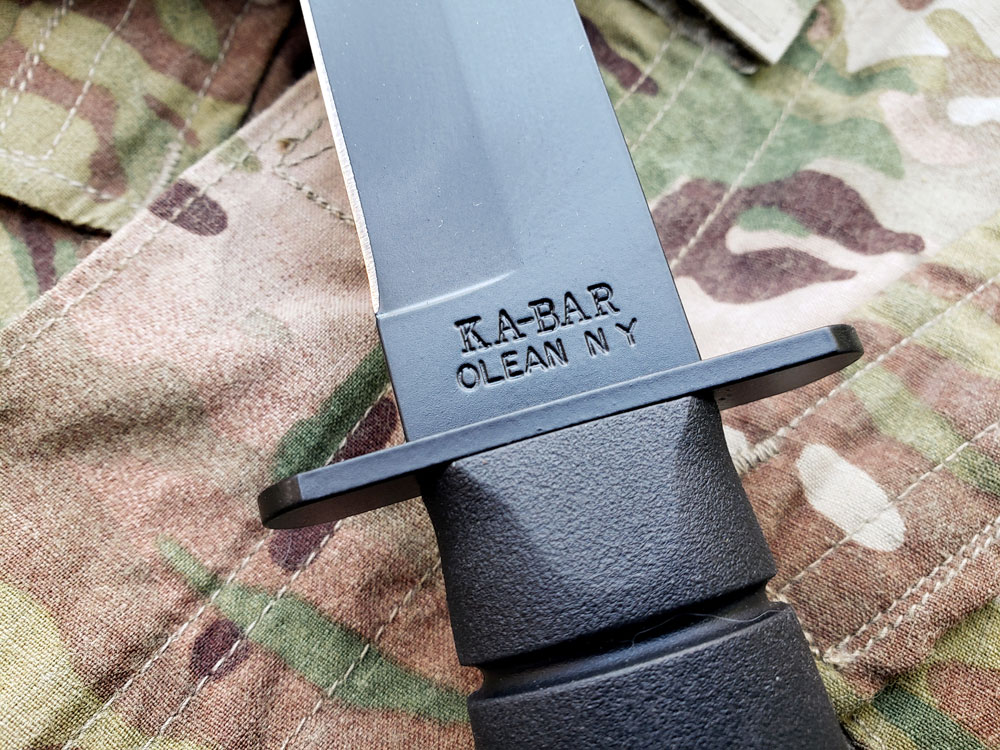 The Modified Tanto is made in New York at KA-BAR’s Olean, New York, plant

The Modified Tanto comes with a glass-filled nylon sheath that has a triple retention system as well as lashing points for attaching the sheath to your gear. There is a strap that goes over the guard, as well as one that snaps around the handle.

Additionally, a pair of plastic tabs snaps over the guard when you seat the knife in the sheath. So, even without the straps in place, the knife isn’t going anywhere. You can shake the knife upside with just the tabs engaged and the knife doesn’t come out.

Despite the extra security, it’s still easy to draw the knife by simply  applying some pressure with your thumb to the tab as you draw.

If you want to attach the sheath to MOLLE gear without just tying or taping it in place, KA-BAR offers an optional KABAR Attachment System that comes with two sets of attachable loops and eight mounting screws.

The Modified Tanto is simply marked with its proudly made in the USA stamp and 1266 model number.

The 1266 itself is proudly made in the USA in Olean, New York, and its sheath is made in Taiwan. The MSRP on the Modified Tanto is $198.28. The optional Attachment System will set you back another $13.90.

The 1266 is first and foremost a combat knife. With that in mind, I looked for combat-related tasks for my field testing.

Despite my best efforts, I was unable to locate any roving Taliban units in the hills of Western Pennsylvania for hand-tohand combat tests.

It must be the lack of caves in my area. As a backup plan, I decided to see what kind of utility chores I could do with it instead. 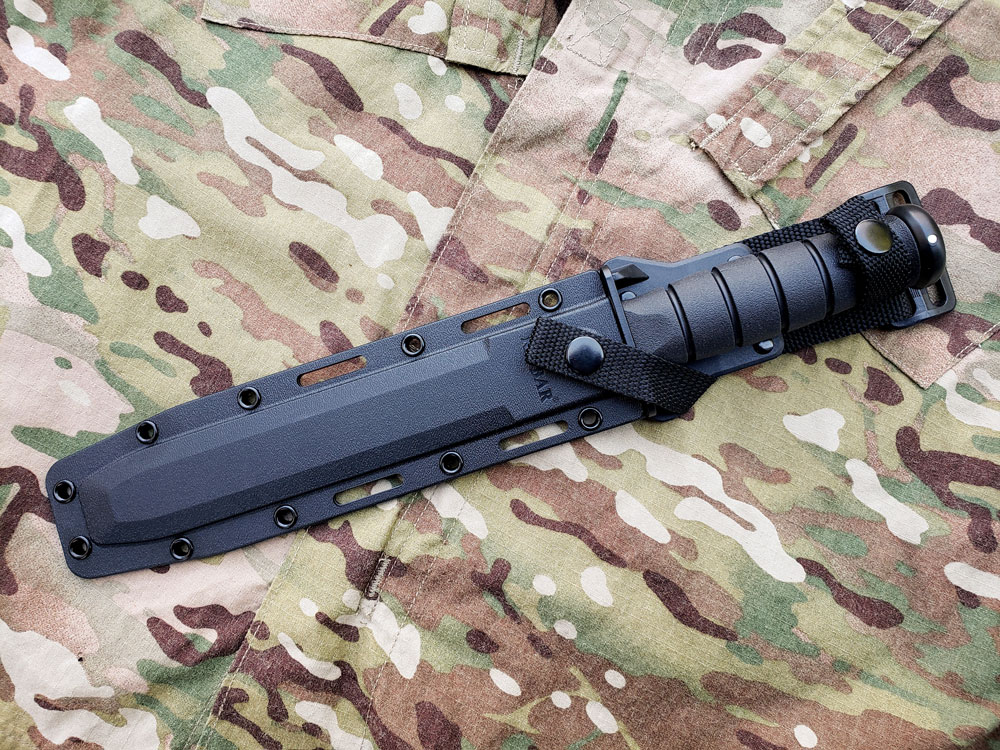 The Modified Tanto ships with a rugged glass-filled nylon sheath with multiple retention and mounting options. The sheath uses double retention straps that lock down both the guard and pommel of the knife to ensure retention.

The traditional KA-BAR handle has been much copied, and with good reason. The oval cross section, with its five-groove handle and palm swell, works extremely well for a variety of hand sizes and grip styles.

While I love the look and feel of traditional stacked leather, the 1266’s composite rubber handle is very functional.

The material’s light texture, along with the grooves, ensures a solid grip even when the handle is wet or covered in fluids.

There’s not so much texture, though, that you get hot spots. And, the modern materials ensure that the handle isn’t susceptible to rot like the leather ones could be in certain conditions. 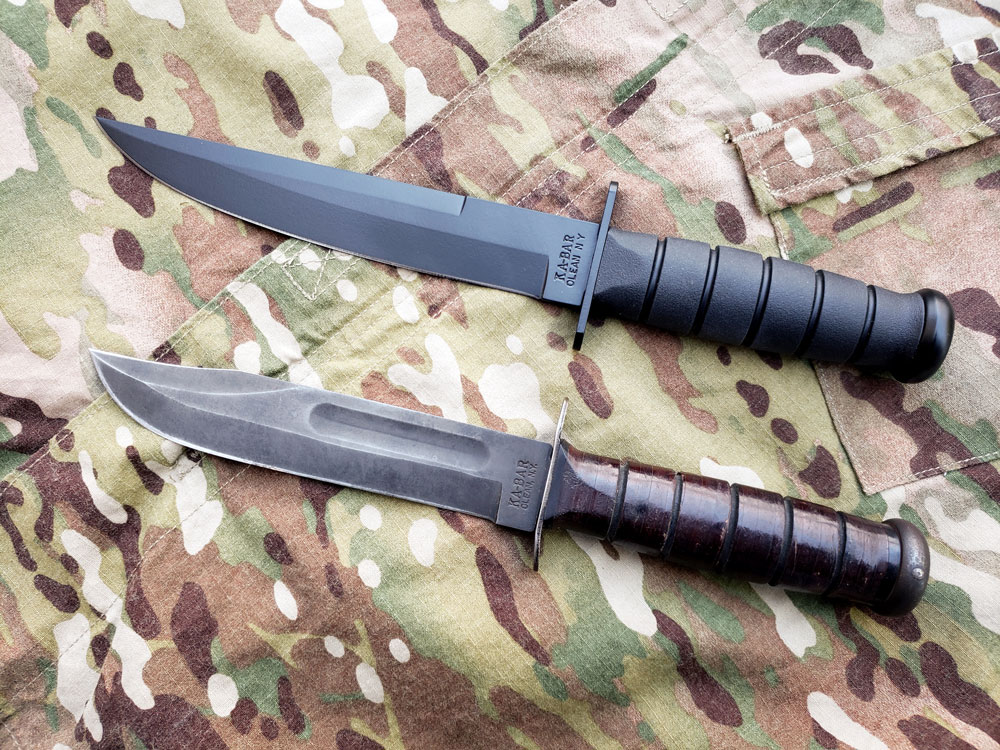 The 1266 Modified Tanto compared to the author’s old traditional KA-BAR that he bought while in the Army.

The balance point on the 1266 is right around the first handle ring, below the guard, giving it a buttheavy feel. That, combined with the tapered blade, made me suspect that the 1266 would not be a great chopper for field work.

A little bit of backyard work quickly proved me wrong. Despite not being a massforward piece, I found the 1266 actually worked great.

If I wanted a little extra leverage I choked back on the handle, gripping it by the back three rings and using a snap cut technique. I made quick work out of 1- to 2-inch branches and cut up some wooden stakes. 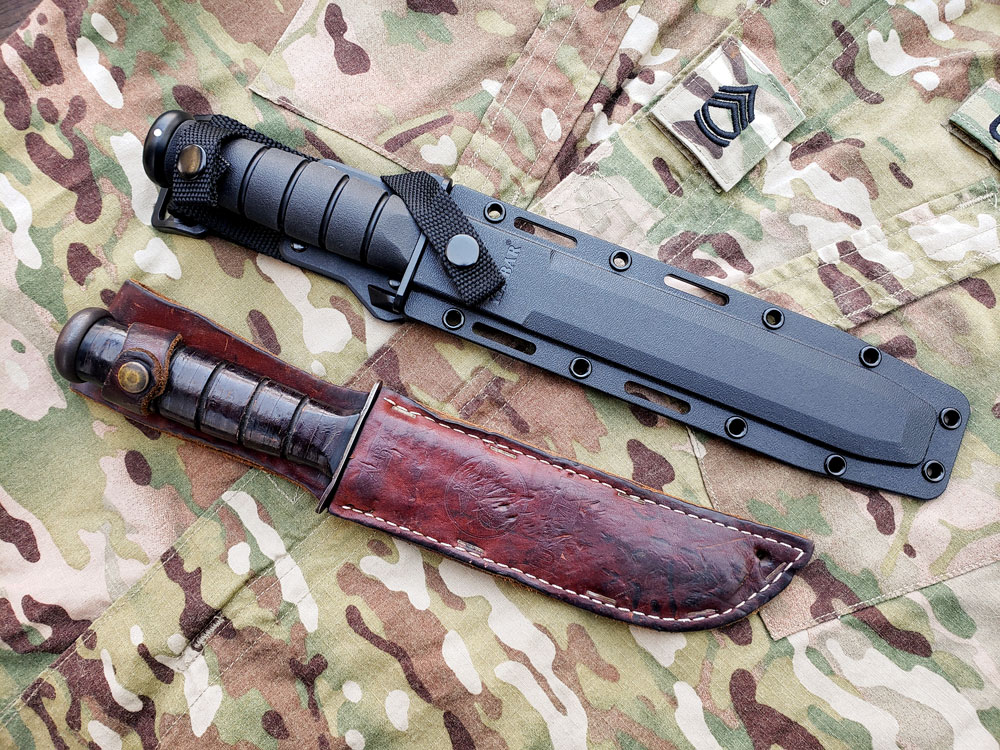 While the traditional leather sheath of the author’s original KA-BAR was nice, the modern glass filled nylon version that comes with the Modified Tanto is much more durable.

The tanto’s plain edge proved quite capable for whittling points on the stakes and for notching, too. The knife had a slightly toothy edge when I got it.

It would scrape hair, but not cleanly shave it, but that didn’t seem to affect its performance on wood in the least, let alone more mundane tasks like cutting open boxes and cutting through some cordage and old rope I keep lying about for test purposes. 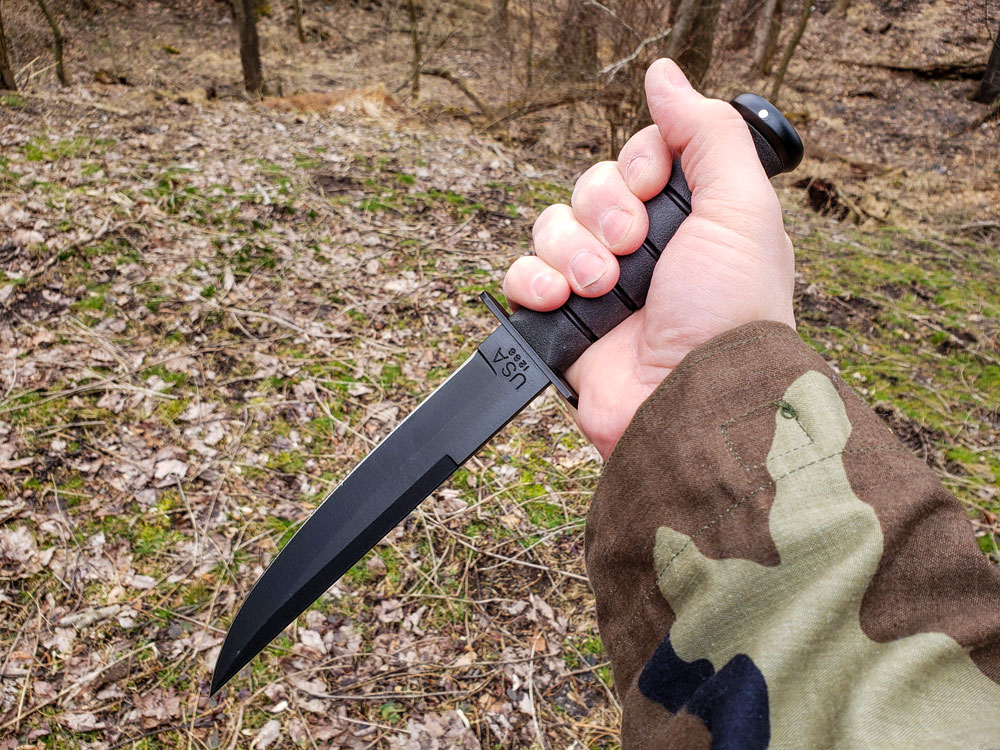 The Modified Tanto’s grip is quite comfortable in a variety of positions, including the basic ice pick grip

The point of the 1266 is a long, gradual sweep to a fine point, as opposed to the blunt, angular tip common to the American-style tanto like KA-BAR’s model 1245.

I did some test stabs into my stacked cardboard test targets and found that the 1266 penetrated deeply and seemed undeterred by denim or leather coverings on the target.

The handle works well in an ice pick grip, and the combination of handle design and double guard keep your hand safely away from the blade, even on full force stabs. The toothy 1095 steel worked extremely well for carving quick stakes for use on tarps or camo netting.

Does the Modified Tanto perform any better than an American tanto like the 1245? Hard to say without a side-by-side comparison, but it does penetrate quite well. I suspect you’d get a bit better penetration with the 1266, but that the blunter tip of the 1245 might be a little bit tougher.

Regardless, that penetrating ability, along with the extra inch of blade over a classic KA-BAR, should serve it well for defensive use. That slightly longer blade would come in handy when punching through soft armor, heavy winter clothing or a utility vest as well.

The long continuous curve of the 1266’s edge made it a great slashing weapon as well and I found that I could make long, deep cuts in my test target. Underhand stabs also penetrated quite well.

A KA-BAR for the 21st Century

When I went into the Army back in 1988 as a 17-year-old private, one of my first purchases was a stacked leather handle KA-BAR from the PX at Ft. McClellan, Alabama. I used that knife a lot over the years in the field, as well as on personal hunting and camping trips.

It was a do-all blade that performed well at everything I made it do, even some of the things it probably wasn’t best suited to. While a traditional KABAR will still serve quite well today, I do think the more modern ones like the 1266 give some nice options to today’s troops.

The extra length and fine point of the Modified Tanto in particular make it a fine combat knife, and the combination of proven 1095 Cro-Van steel with durable, weather resistant Kraton handle and modern sheath make it suitable to serve on for decades to come.

If you’re serving now, or have a son or daughter in the ranks, and need a great field knife, then you may want to give a hard look at the American made KA-BAR with a little bit of Japanese inspiration. 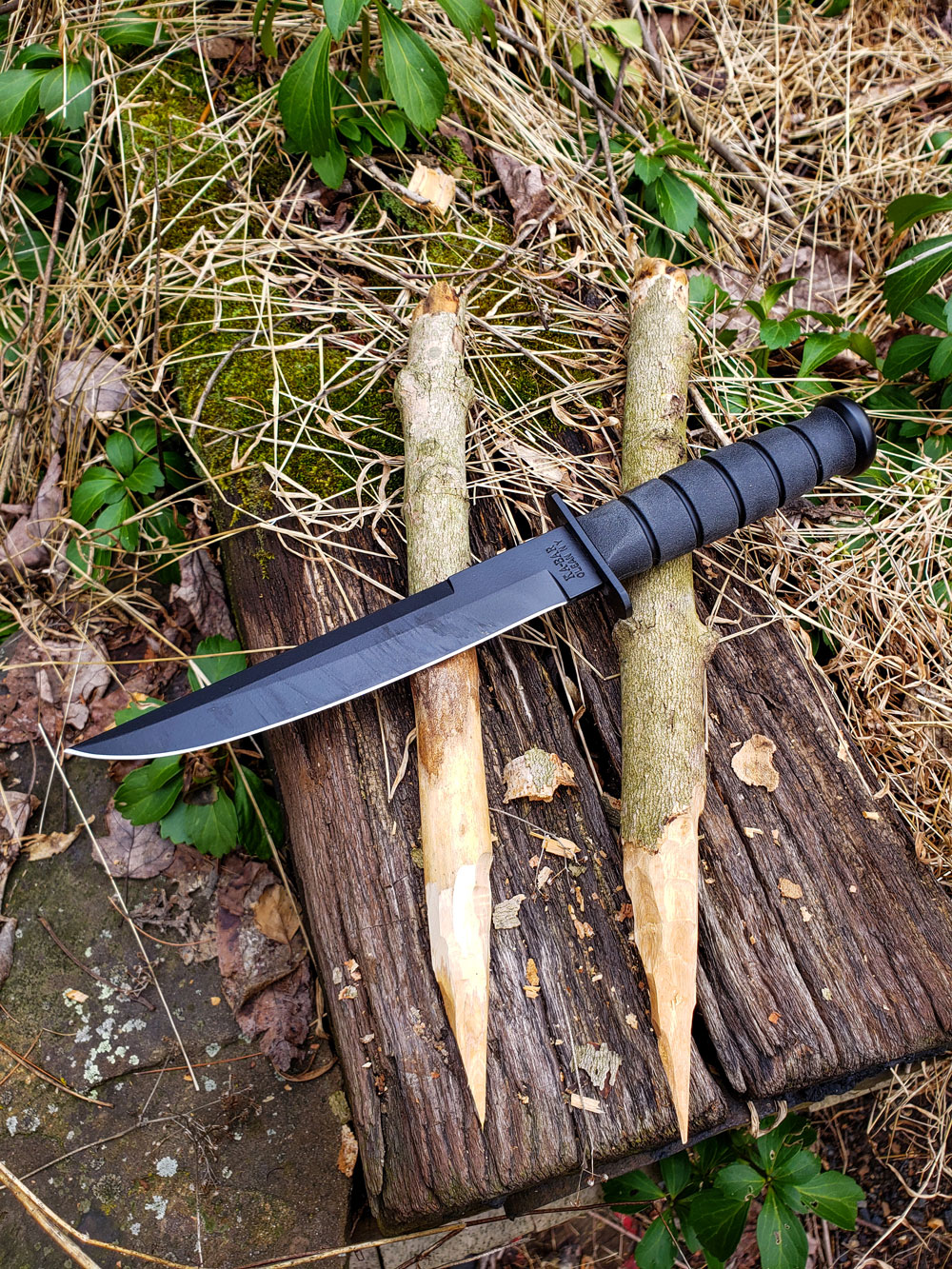 The author was able to quickly whip up stakes suitable for securing tarps or netting with the KA-BAR Modified Tanto.

The author was pleased with how well the Modified Tanto chopped, despite its sleek blade and handle biased balance. 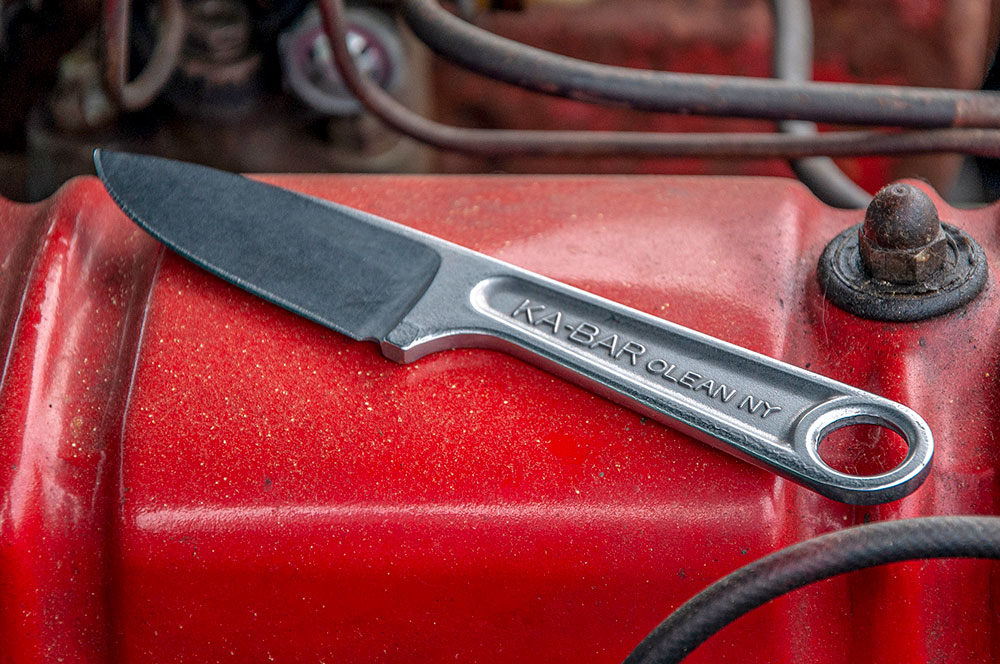 For users looking for a compact, quirky, indestructible blade, KA-BAR’s American made one piece forged Wrench Knife is just the ticket.

If you don’t need an actual combat knife, but need an ultra-sturdy utility knife, then the new Forged Wrench Knife might be just the thing for you. Inspired by the rugged tools found in garages and mechanic bays worldwide, the drop-forged, 425 high carbon stainless steel Wrench Knife is a functional homage to folks who work with their hands.

With a 3-inch blade and at 7.125 inches overall, the Wrench Knife is compact enough to be carried on your belt, strapped to your vest or pack, or tossed in your toolbox. It’s plenty of blade for utility tasks though, and being a solid piece of drop-forged steel, is about as durable as it gets.

The handle harkens back to the wrenches in your dad’s toolbox and works as well when you grip it for cutting tasks as it does for cranking down on the nuts of recalcitrant motors.

The Wrench Knife comes with a hard-plastic sheath and both it and the knife are made right here in the USA, just like the tools that inspired them.