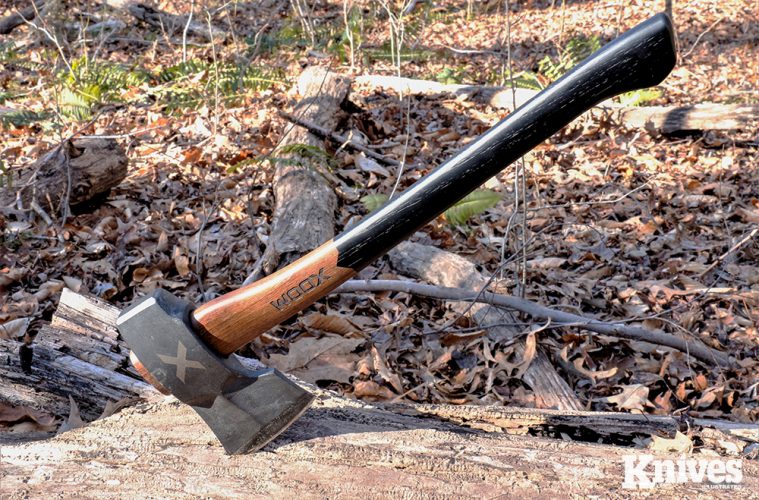 Sometimes the middle ground is the best place to be. When it comes to choosing a chopping tool for camp, I’ve often found a mid-sized axe provides the best balance of features and performance for my purposes. The new Woox Forte Axe falls into that mid-sized category.

But in plenty of circumstances, I find a tool such as the Woox Forte to be the proper tool I need, despite slight compromises on either side of the size and weight spectrum. 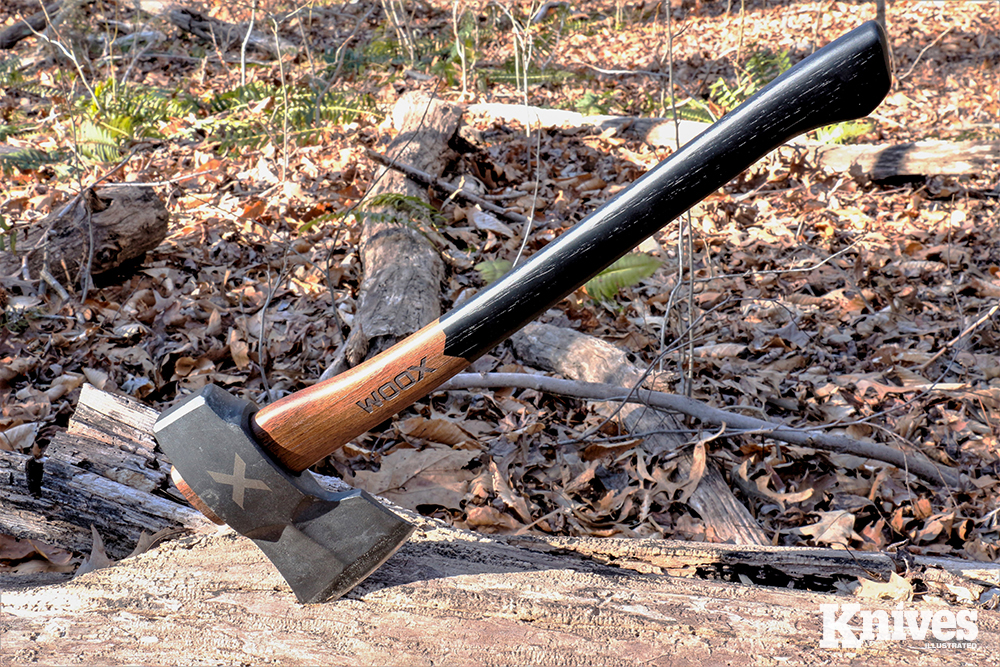 The Woox Forte Axe is a well-made, mid-sized tool that makes a great all-arounder for camp chores.

The Forte features a head of tempered 1060 carbon steel hand-forged in Italy and a handle of American Appalachian hickory that’s assembled to the head in the Woox facility in Hickory, North Carolina. That handle is treated to be water resistant and is 22 inches long, long enough to use with a two-handed swing.

Together with an overall weight of 3 pounds, you have a mid-sized axe with enough leverage and chopping power to do some serious work.

The Woox Forte, while not likely to be on a lightweight backpacker’s gear list, would be a good choice for packing into the backcountry when establishing a remote camp

The head of the Forte features a blued finish. It’s 7 ¼ inches long and 1 ¾ inches thick with a substantial hammer poll on the back side and an edge 4 ¼ inches long on the cutting side.

That edge is long enough to bite into larger chunks of wood than you could tackle with a hatchet and has enough beard to allow for finer control when choking up on the handle.

“The Forte is superbly balanced and…I was able to keep the bit on target and well aligned with the cut for maximum power and efficiency.”

The head features a large oval eye and is slip-fit to the handle more like you’d find in a tomahawk. That makes handle replacement easier should you have to do it in the backwoods as no wedges are needed.

Woox notes that the handle is finished with a “slip-resistant paint.” I found it does provide some subtle texture without raising hotspots or blisters during use. The end of the handle is flared and curved to help to maintain a hold on it during the swing. 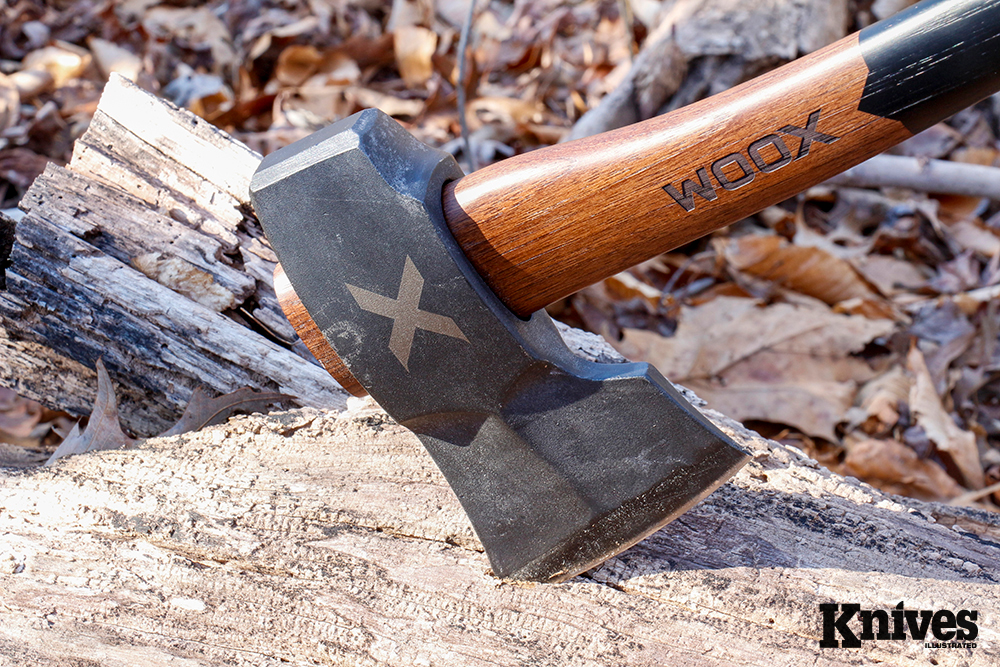 The company says the shape of the head was inspired by Italian woodworking axes. It has a broad, slightly curved bit with a high concave grind, but with a ridge along the centerline that’s an aid when splitting firewood or breaking chips of wood free from the cut. 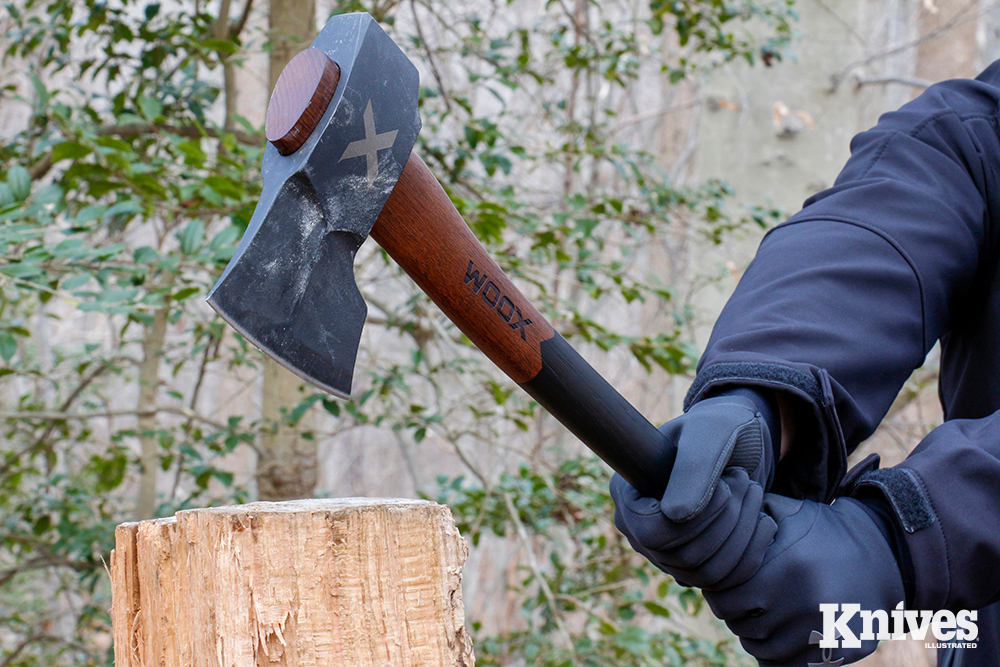 The Woox Forte, at 22 inches long overall, allows for a powerful swing with a two-handed hold.

My Woox Forte Axe came with a leather sheath, and this is the one thing I think could use some improvement. The securing strap with snap is designed to wrap around the back of the poll. But it kept slipping off.

I would suggest that Woox lengthen the strap so that it can be wrapped around the bottom of the poll. The sheath does include a carabiner to hang the axe to keep it off the damp ground around camp.

THE FORTE AT WORK

The Forte arrived with a sharp edge. I was glad of that. I’ve spent long sessions with a file on the bits of hardware store axes in the past. Those lesser expensive tools aren’t necessarily bargains. Another area that confirms the “you get what you pay for” credo is the balance of the tool.

The Forte is superbly balanced, and with each chopping stroke, I was able to keep the bit on target and well aligned with the cut for maximum power and efficiency. Compare that to some bargain choppers where I’ve had to fight with the tool constantly and back off on the swing to keep the edge in line. 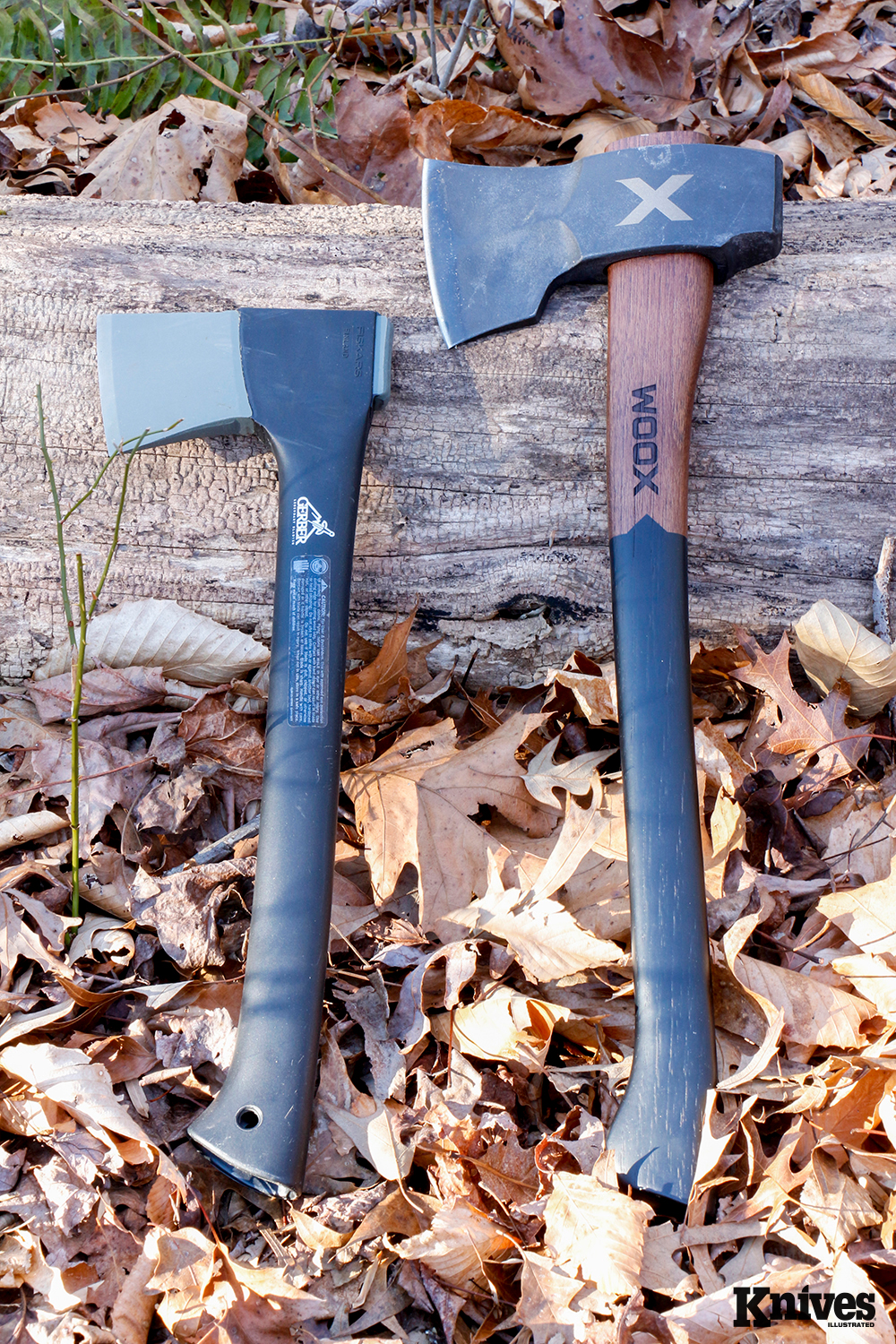 Here’s a size comparison of the Woox Forte to the author’s old Gerber Camp Axe.

I was able to make use of a tree stump that was about 3 feet high as a chopping block for splitting chunks of firewood. A chopping block that high suited the Forte and its 22-inch handle very well. The bit contacted the wood when the handle was parallel to the ground.

When limbing a downed tree or using a lower chopping block, I’d have to lower my stance to get closer to the work. That’s when an even longer handle would have been a plus. As is, the Forte did a very good job at every assigned task.

I was able to use the Forte one-handed too by choking up on the handle for more precise work. It wasn’t quite as nimble as a lightweight tomahawk, but the added chopping power more than offset that limitation. Fashioning stakes with two or three easy slices was easy work.

The more you use the Woox Forte, the more you’ll find it makes camp chores easier.

Yes, making stakes seems like a very elementary task, but it’s one of my more common chores when I’m erecting a poncho as a makeshift shelter or hanging a tarp to create a covered cooking area. (I have a talent for inciting foul weather with the mere mention of my intention to cook outside.)

I used a hatchet to trim a dead tree branch to size for a replacement tent pole a few months earlier. It worked, but the Woox Forte would have made the job much easier.

Where would a mid-sized axe such as the Forte best be used? While it’s not sized for backpacking on a trip that entails a series of one-night camps, it is easy to attach it to a pack for transporting it to an off-grid, off-road camp for longer stays.

If I’m establishing a remote camp where I intend to stay for several days, the Forte could serve well, especially in cold weather if I was relying on fire for heat. 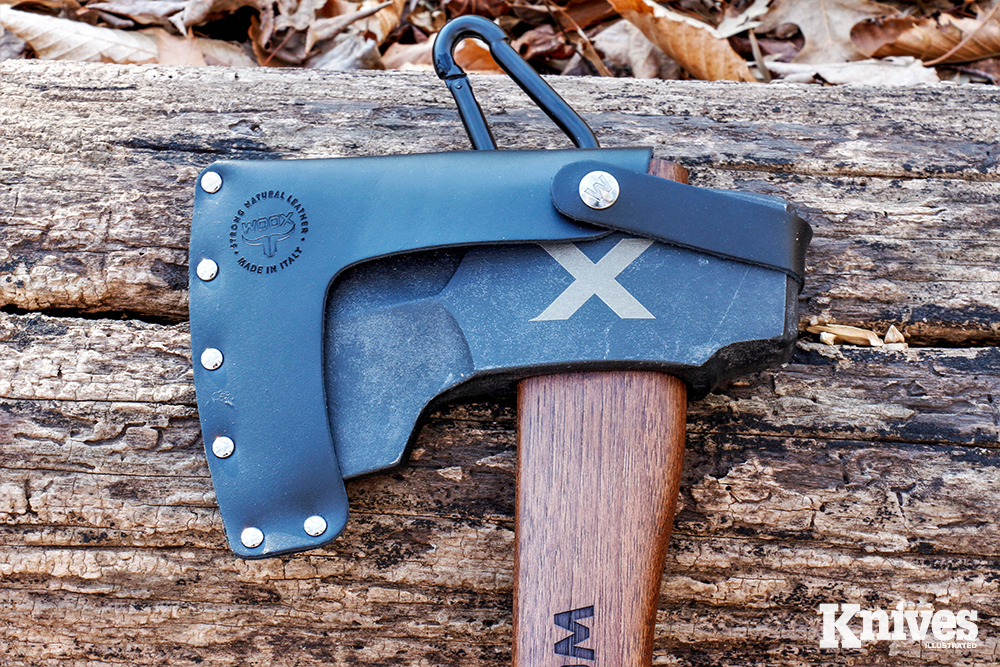 The author’s Forte came with a leather sheath with carabiner. The author would have preferred a longer strap that cold be wrapped under the poll for better security. 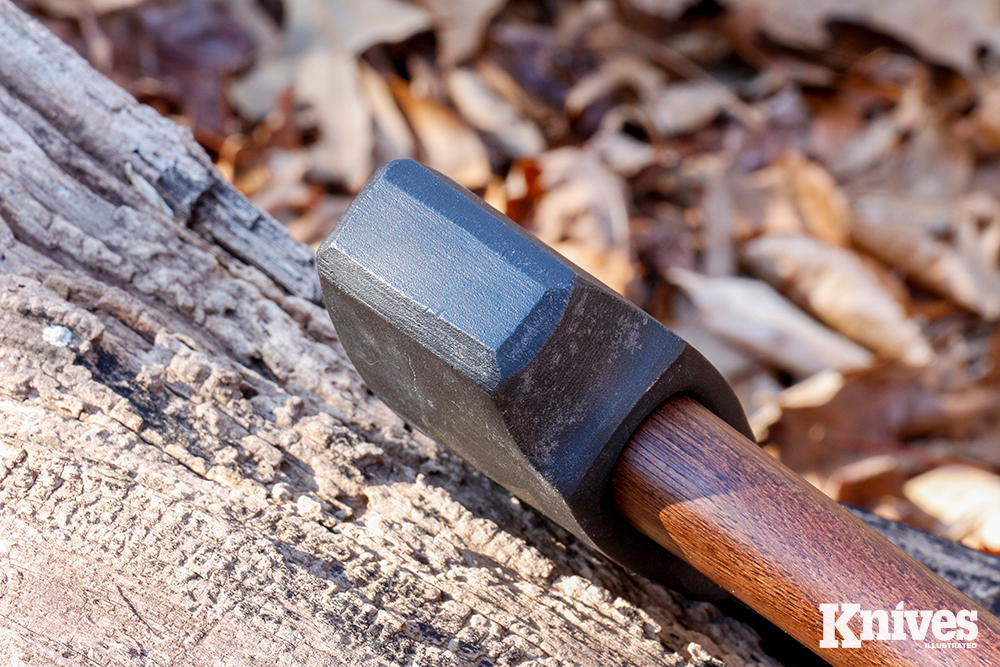 I’ve spent enough nights in the woods depending on a fire’s warmth to know that if you’re limited to wood 1 to 2 inches in diameter, you’ll have to tend that fire every 45 minutes to an hour at the least. And an all-night fire would require more small wood that you might estimate if that’s all you have.

With the Woox Forte, you could chop enough larger chunks of wood to see you through the night more comfortably. And you could pile up that firewood much easier than you could with a lightweight hatchet.

I think I will find the Woox especially useful in supplying fuel for the small wood stove I plan on putting in my wall tent at deer camp. 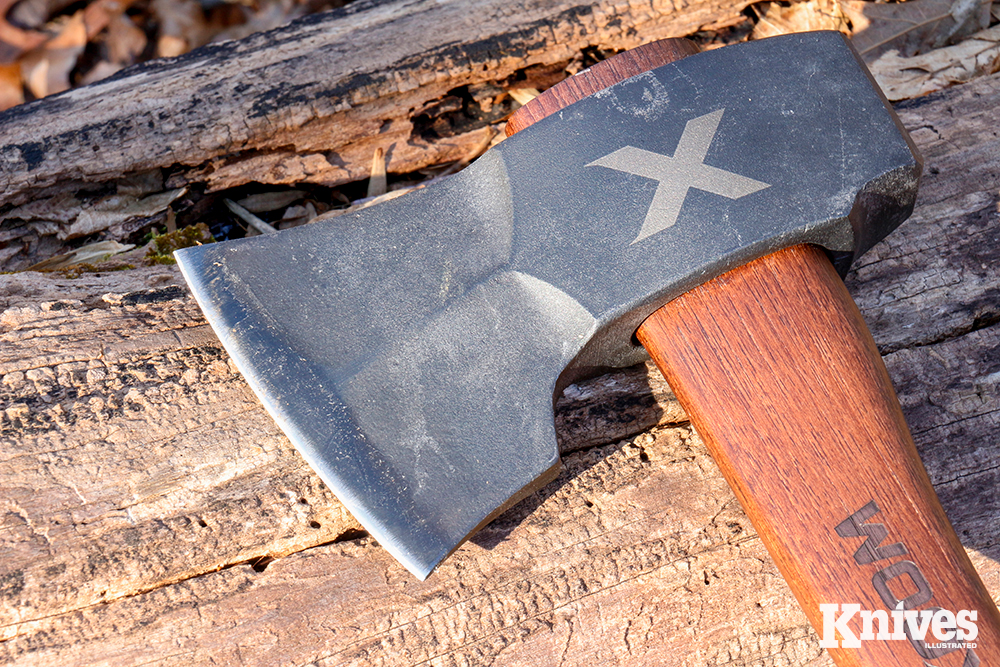 The edge of the Forte is 4 ¼ inches long and with a slightly curved beard. 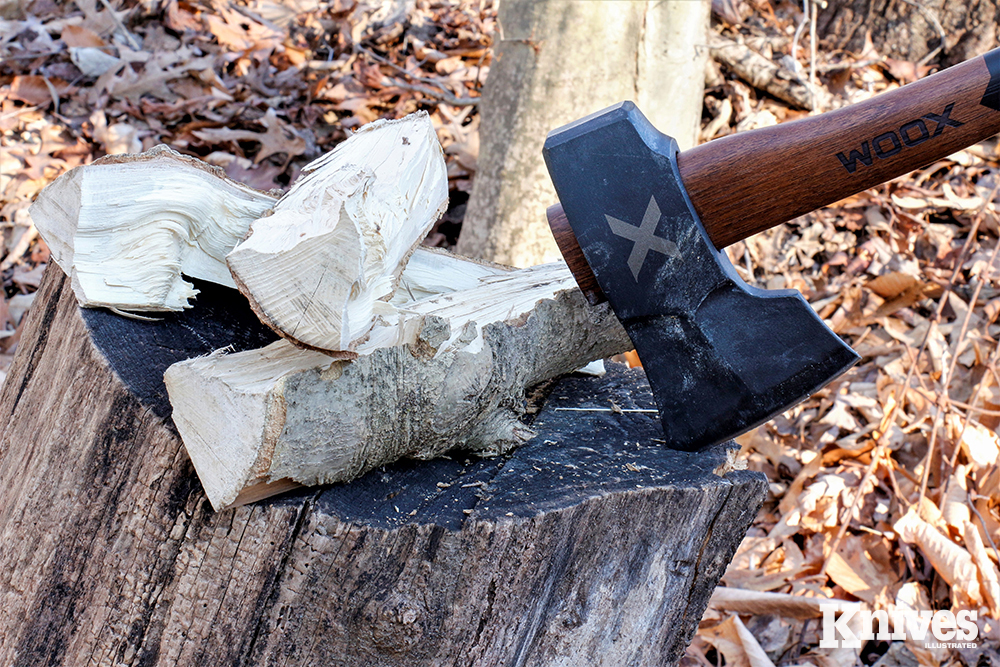 The Woox Forte Axe did a great job at splitting modest-sized firewood.

Clearing a path is another good reason to have such an axe as the Forte. Many years ago, at the end of a hunting trip, my brother and I found the only dirt path out, which was blocked by a fallen, Paul Bunyan-sized tree.

There was no chopping through it in one lifetime, but we could go around it once we removed some smaller, standing dead trees. In that instance my brother had a small chain saw in his truck, but an axe would have proven up to the task as well. 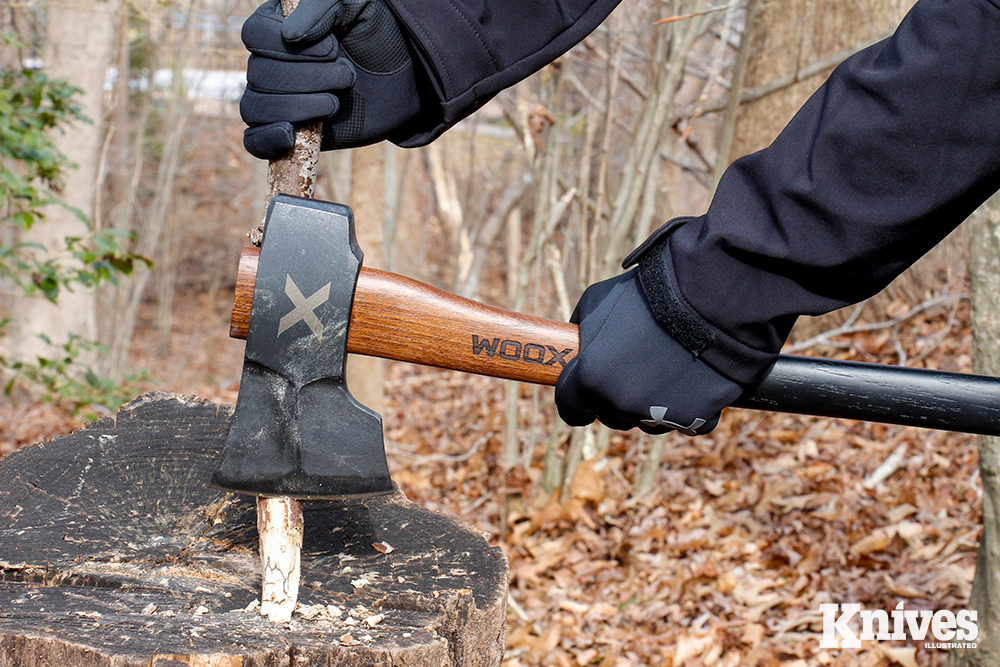 Choking up on the handle, the Woox Forte can be used one-handed for more precise detail work. 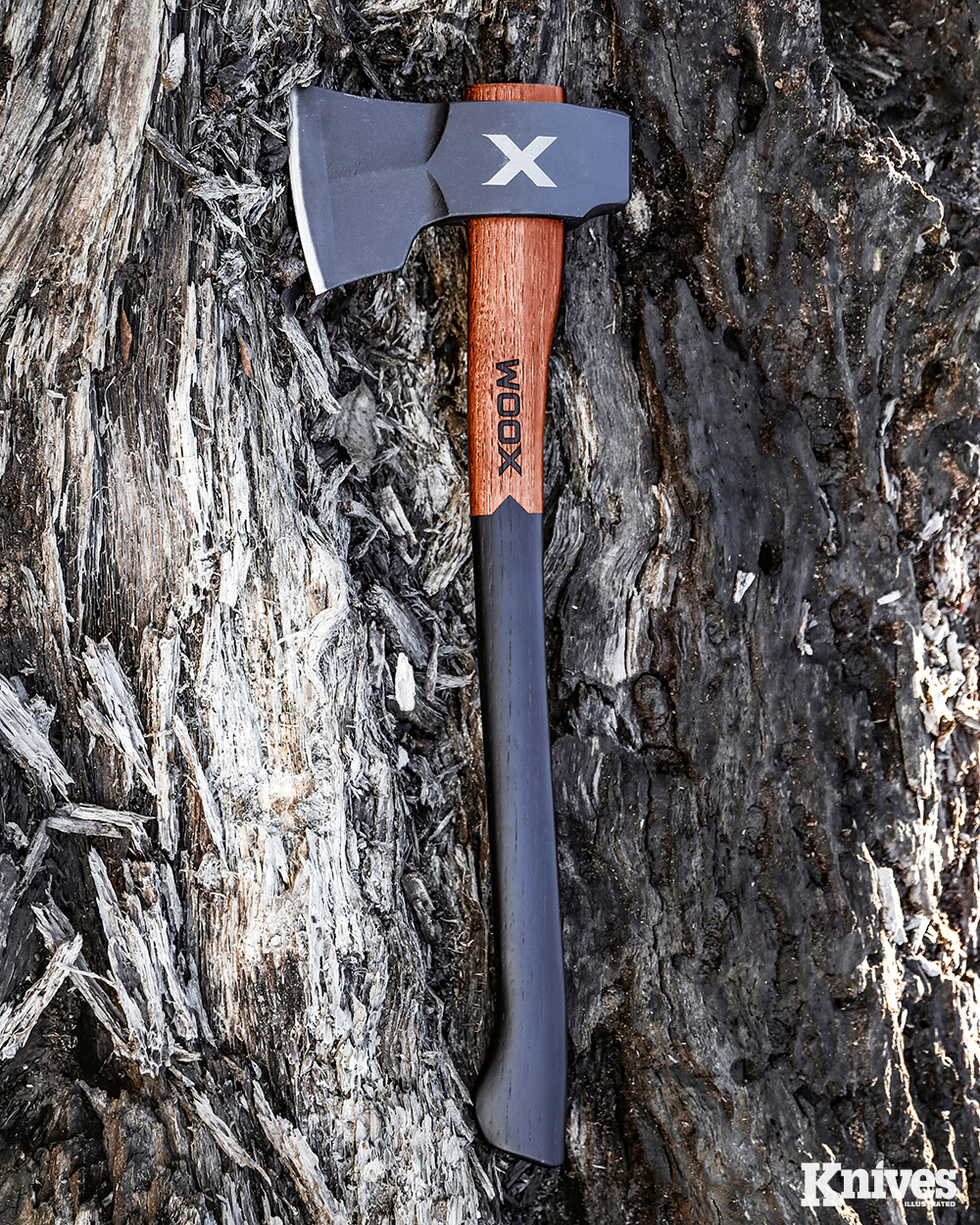 The Woox Forte is as attractive as it is practical. Used with reasonable care, it should perform well for many years. Woox photo

The WOOX Forte Axe is high quality all the way around. With reasonable care it should perform well for a lifetime. It sells for $169, and that’s reasonable for a good axe.

Editor’s note: A version of this article first appeared in the May/June 2021 print issue of Knives Illustrated.