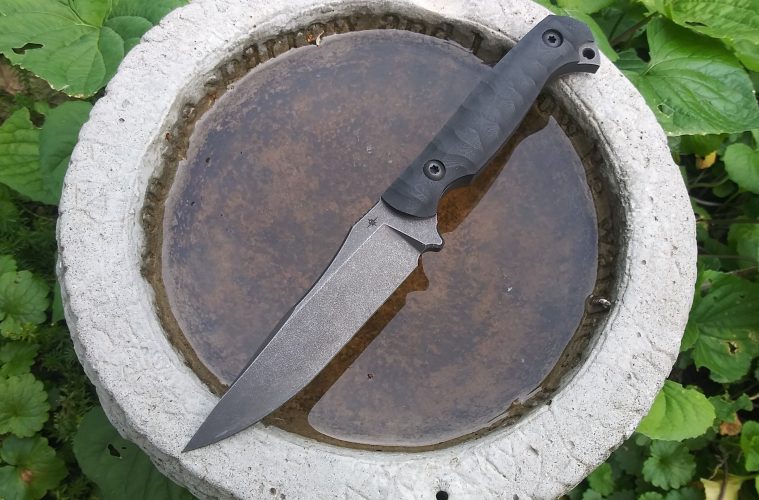 The Krypteia from Toor Knives Is Brutally Tough

I’d been passingly familiar with Toor Knives when a colleague of mine started talking up its Field Knife 1.0. He was really impressed with the fit and finish of the knife and said it was a great addition to his collection.

That was the final impetus I needed, so I headed over to DLT Trading. It had three Krypteia models: Stealth, which had a light gray handle; Carbon, which had a dark handle; and JD35S, which is a jump/dive variant equipped with a partially serrated blade and corrosion-resistant coating throughout. I went with the Carbon option; if you’re going to go for a tactical knife, it just makes sense for it to be black, right? 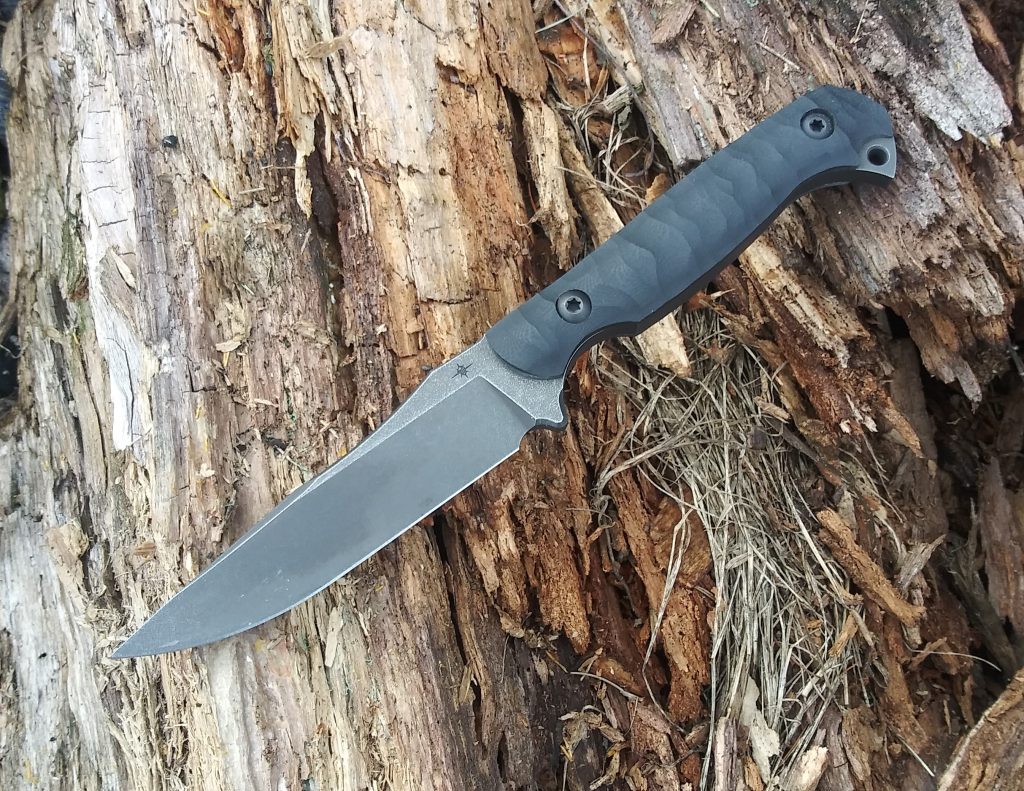 You can see how the handle is textured to help retain a positive grip.

The knife arrived the day after the order was placed. Toor uses a presentation-style box for packaging its knives. Inside was a sticker, a dust cloth, the knife, sheath, and a small tube of Frog Lube. The inside lid of the box has a large sticker that provides information about the knife, including the basic specs. 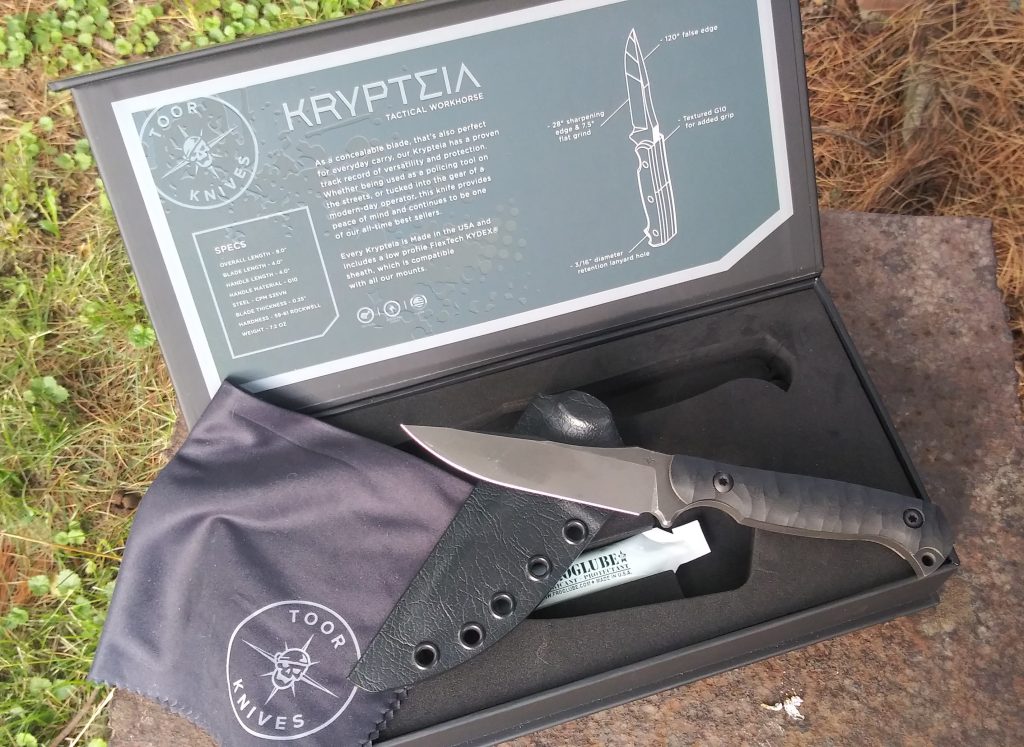 The display box provided by Toor is a very nice touch.

The knife and sheath are secured in foam cutouts inside the box, and the Frog Lube was underneath the sheath. Secured might be an understatement, as I ended up needing to use a slim letter opener to pry the knife handle up enough so that I could pull it free. 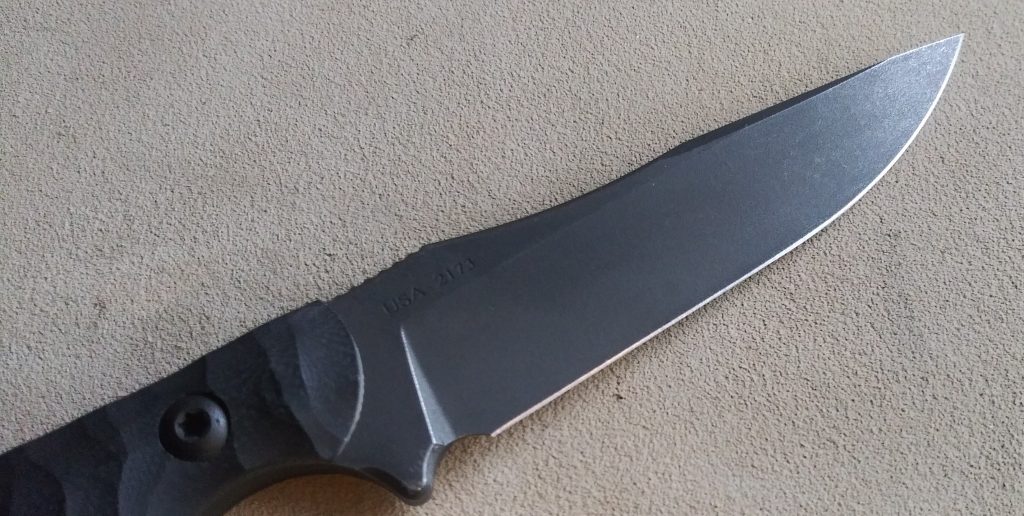 The Krypteia’s blade has a flat grind that reaches nearly to the spine, making for a very slicey knife.

The first thing I noticed was the weight and solidity of the knife. At a bit over 7 ounces, it isn’t exactly like holding a brick, but it’s incredibly solid and robust. I’ve never been one to torture test knives, but this one feels like I could use it to forcibly disassemble a stack of pallets with nary a scratch. The blade is ¼-inch thick at the spine, and the G10 scales are married to it with such exactness that there’s almost no discernable difference between the two materials. 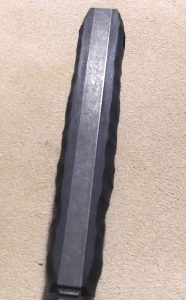 Notice the very slight palm swells on both sides of the handle.

End to end, the Krypteia measures 8 inches, evenly divided by blade and handle. The textured G10 scales are contoured with slight palm swells in addition to a finger choil at the top. At the base is an exposed tang bird’s beak with a lanyard hole. Now, here is where my only real gripe about the knife is located. A bird’s beak handle is excellent for assisting with retention. However, the way it was done on this knife resulted in very sharp points next to the lanyard hole. This is easily fixed with some sandpaper, but on a higher-end knife like this, it was unexpected. In some grips, those points are downright painful. 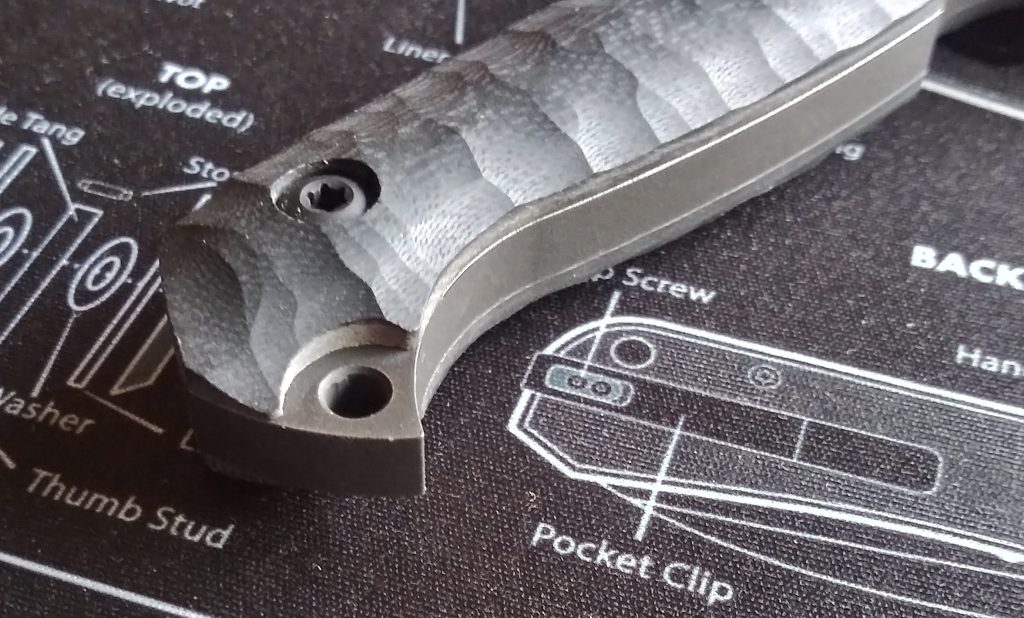 The points here on the bird’s-beak handle shape should be broken down a bit by sandpaper for better comfort.

The blade has a flat grind that reaches almost to the spine. Toor went with CPM S35VN steel for the Krypteia. This is a tough steel that will stand up to a lot of abuse. It will also keep a keen edge for a long time. However, it can be a little difficult to sharpen. Not impossible, of course, but it will take a bit of time to accomplish if you make the mistake of letting the knife get truly dull. Granted, we’re all knife people here and we’d never let something like that happen, right?

The small thumb break here on the sheath is quite handy.

There’s a thumb ramp on the spine with some jimping. Some people like ramps and jimping, others don’t. I’m one of those who do appreciate those touches. Just ahead of the ramp, the spine curves downward slightly. I’m certain this is an intentional design element, as I found it is a great place for my thumb to rest when I need to apply a little pressure for certain cuts.

The Krypteia comes with a Kydex sheath. It has a nice texturing to it, with almost a leather-like appearance. They’ve included a small thumb ramp to assist with removing the knife, which is always nice with a secure sheath. There are several attachment points where you could utilize cordage to attach the sheath to a pack or even a pack strap. However, there is no belt attachment included with the sheath. They do offer various options as upgrades on their website, such as different Ulticlips or just a simple inside waistband clip. 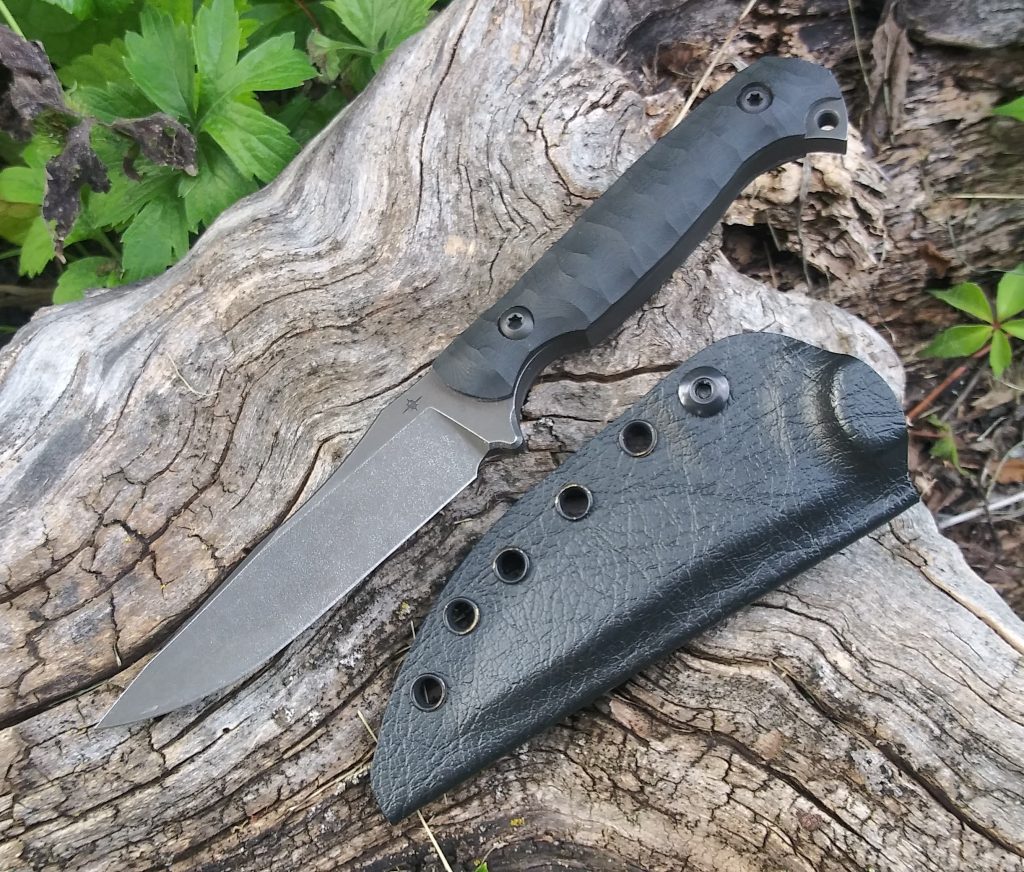 The Krypteia comes with a sturdy and handsome Kydex sheath.

I’ve had the Krypteia for almost five months now. I’ve carried it off and on during that time and used it for a variety of tasks, including:

Here’s the thing. Aside from those points on the bird’s-beak end of the handle, the knife is very comfortable to use. However, in most cases it feels sort of like showing up to a county fair demolition derby driving a brand-new tank. Meaning, it is overbuilt for most common chores. Now, I’m not suggesting that’s any sort of slight against the knife — far from it. Rather, this is the sort of knife that, once you start carrying it, you’ll find yourself going out of your way to look for times you can use it, to hopefully challenge it in some way. And most of the time, you’ll be left wanting, as this is a knife that’s designed and built for heavy-duty use and abuse. 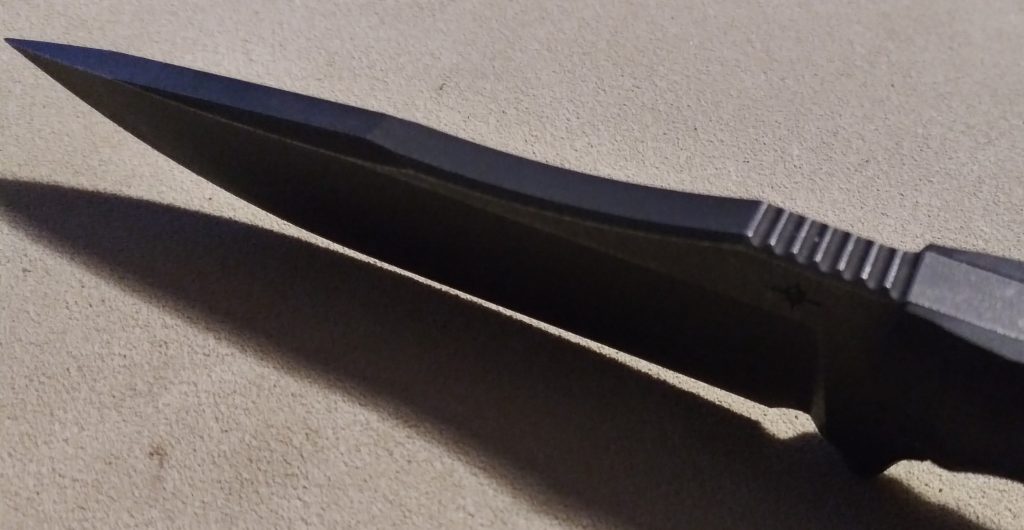 Here you can see both the jimping on the thumb ramp as well as the curved spine that makes a great spot to rest the thumb when working with the knife.

Fair warning, though. It is a mean-looking knife, particularly to non-knife people. This is not the blade you’re going to want to carry around the office and use to cut the straps on copy paper boxes. Chances are pretty good that doing so will garner you an all-expenses-paid trip to the Human Resources office. Count your blessings if your workmates would instead be crowding around, asking where they could get their own Krypteia.

Should You Grab the Krypteia?

At the end of the day, I’d recommend the Krypteia to knife users who want something that is going to hold up for a long time and that doesn’t need to be babied. If you’re heading into rough territory or routinely experience challenging conditions, this knife is perfect for you. It will rest patiently, waiting for just the right moment where it is needed, then it will exceed all expectations.

One of the driving forces behind Toor Knives is a passion for supporting the U.S. military. In their shop in San Diego, California hangs a large U.S. flag. As they’ve posted on their website, this flag is a remembrance for those who have answered the call, so to speak, and given all they had to protect our country.

One of Connor Toor’s goals when he started Toor Knives was to create as many domestic jobs as possible. Today, many of their 30+ employees are military veterans. All are incredibly skilled and have a passion for creating hard-use knives and other products that are fit for duty anywhere in the world.

They are also committed to sustainability and have worked out several ways to reduce their environmental footprint. For example, they developed a way to capture the metal shavings that are created as they cut their knives from sheets of steel. A few hundred pounds of steel are collected each month from this process. The metal is cleaned and taken to recyclers. The proceeds from recycling are then donated to various wildlife conservation groups. This is just one of the ways Toor Knives is working on making a positive impact on the environment.

Find out more at Toor Knives | Made in the USA and keeping checking Knives Illustrated – All Things Knives to stay sharp on all the sharps.