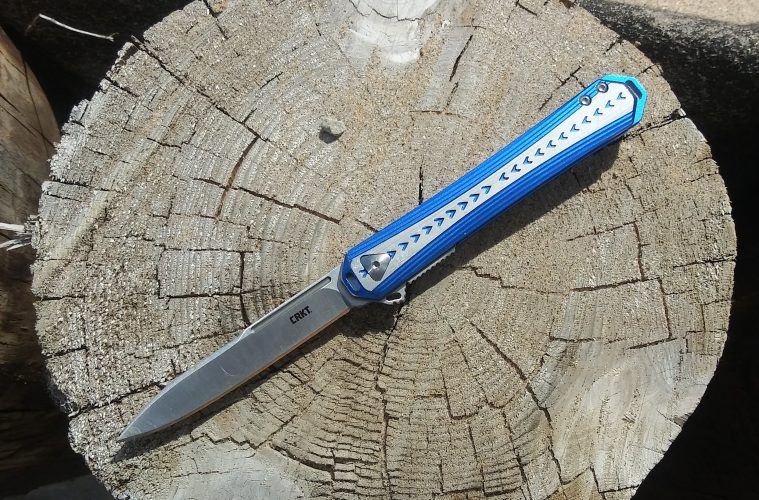 The Stickler Folding Knife from CRKT

I’ve been a customer of CRKT (Columbia River Knife & Tool) for many years. The company has several truly outstanding designs, many of them at very reasonable prices. CRKT knives are a very popular choice for those looking for affordable, yet dependable, EDC blades. The Stickler is a new folding knife model, released just a few months ago. It immediately got my attention and I had to get one in hand. And I’m glad I did. In many respects, it is a quintessential EDC knife.

Designer Jeff Park paid homage to two different types of folding knives with the Stickler. You don’t see them as much today, but melon tester knives used to be fairly common, at least amongst those who worked around produce. They had long, thin, spearpoint blades that were used to cut out a plug from watermelon or other fruits so people could inspect them for ripeness and such. You can see that design inspiration in the Stickler’s slim blade.

The Stickler is lightweight, but solid and dependable.

The coffin jack is a traditional style of folding knife, specifically referencing the shape of the handle. It sort of resembles a coffin, hence the name. It will be wide at both ends, tapering down in the middle. In some cases, the butt end will be wider than the front, though that’s not always the case. The Stickler is symmetrical, with both ends the same width, but still with that distinctive coffin shape.

Combine these two influences, add some eye-catching details, and you have a winner. Let’s take a closer look.

The Stickler stretches 8 inches from end to end when opened, with the blade occupying 3.38 inches of that length. The blade is 12C27 steel and arrives hair-splitting sharp. The knife weighs just 2.4 ounces, so it almost disappears in the pocket.

The spearpoint profile is quite handy for just about any routine task.

The blade is a spearpoint and fairly narrow, perhaps a hair more than a half-inch from edge to spine. It is also pretty thin, just 0.1-inch thick at the spine. 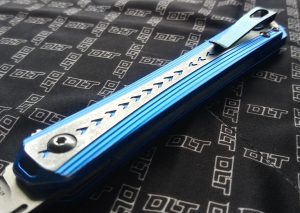 The texturing on the handle provides a positive grip in any condition.

The handle is aluminum with a bright metallic blue finish. I’m not exaggerating when I say this knife is absolutely gorgeous. There’s a brushed aluminum overlay that accentuates the blue as well. The handle is textured and feels very secure in the hand, even when wet.

A deep-carry pocket clip (right hand carry, tip up) keeps the knife in place and there’s also a lanyard attachment point, should you wish to add some sort of functional or decorative lanyard to the mix. That’s not usually my thing, but many people like to use one rather than have the knife clipped to their pocket. To each their own.

The pocket clip is solid, but it is not reversible.

The Stickler features assisted-opening technology, swinging the blade open nearly as quickly as it would if it were fully automatic. There is a flipper on the back of the blade, and it doesn’t take much pressure to get the blade moving. The flipper is small enough that it isn’t going to catch on your pocket as you withdraw the knife. However, it is just large enough to serve as a bit of a finger guard when the knife is open, preventing your hand from slipping up onto the blade. 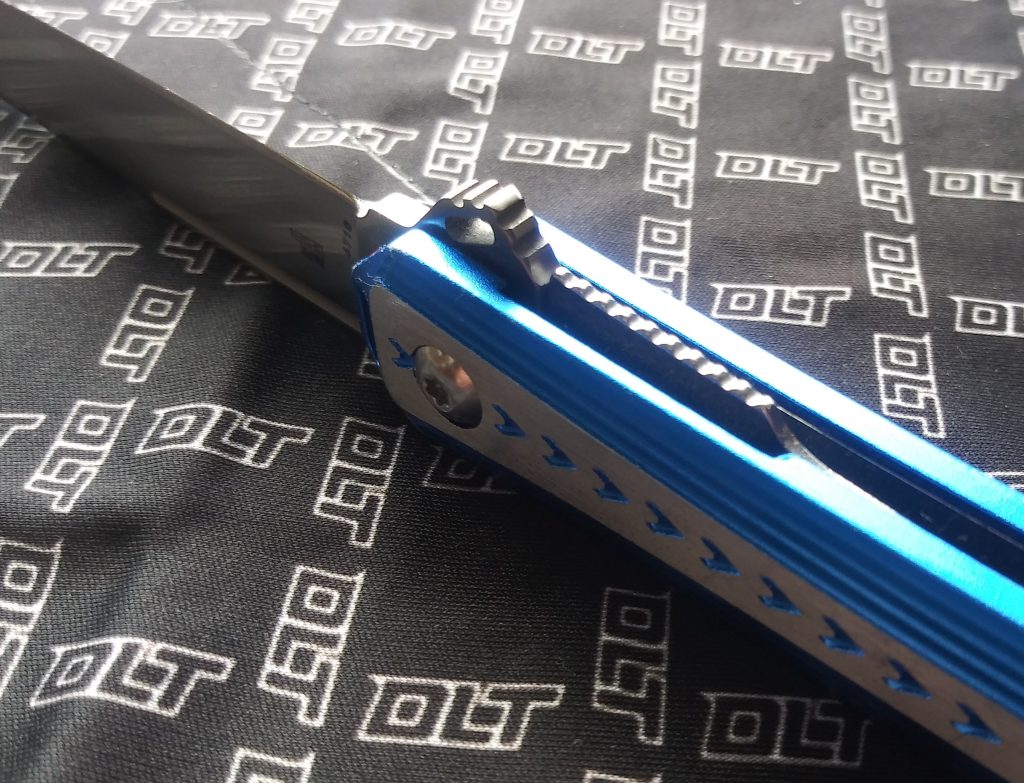 Here, you can see how the flipper turns into a small guard when the knife is open.

A liner lock keeps the knife in place while it is in use. While no lock can ever be considered foolproof, this one seems much more secure than most. On some knives, the lock barely engages on the blade, but on the Stickler, it sits about in the middle of the blade base. At the same time, it isn’t a bear to disengage the lock. You can easily close the knife with one hand.

I’ve carried the Stickler off and on for a few months now. More on than off, now that I’m thinking about it. The knife has gone along on several hikes, helped out in the kitchen, and been my go-to blade for office work, such as slicing open packages and breaking down boxes.

I couldn’t begin to estimate how many times I’ve opened and closed this knife, but it is just as slick and smooth as it was the day it came out of the box. No hesitation, no rubbing anywhere; it snaps open in a flash and closes easily once the lock is disengaged. 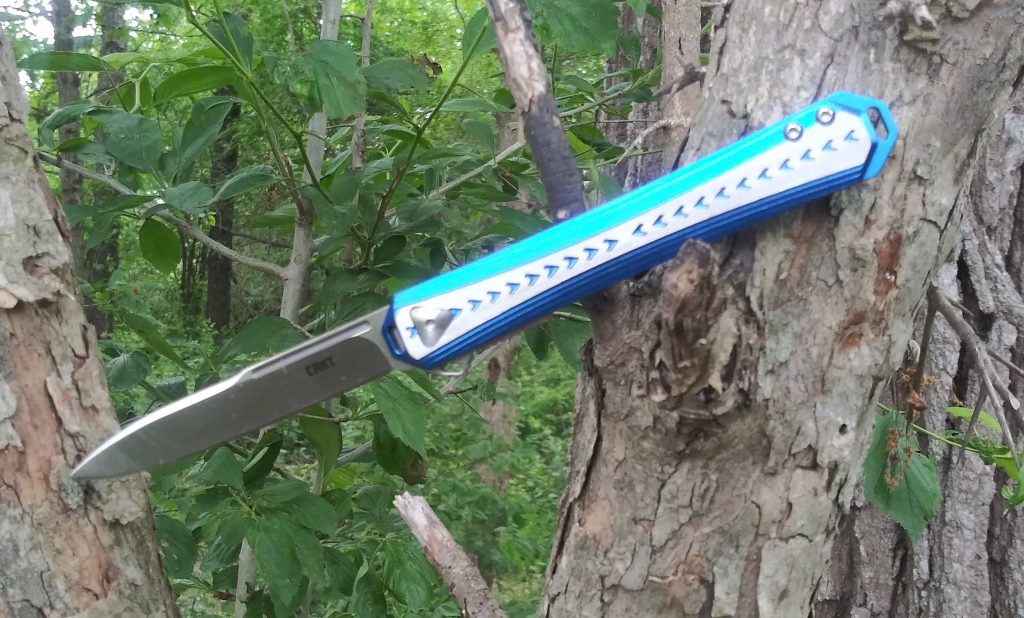 One added benefit of the striking blue handle is it stands out against natural colors, making it easy to find if you set it down somewhere.

I’ll admit that I’m not overly familiar with 12C27 steel. It is a Sandvik product and they state on their website, “12C27™ is our main knife steel for hand-held knives, high-end ice skate blades and ice drills. Continuous improvement over a period of 45 years has evolved it into the high performing steel grade it is today. The composition is tighter, the purity level is much higher and the fine carbide microstructure of today is far from how our 12C27™ knife steel of the sixties looked.

Based on my experience with the Stickler, I can say that this steel holds an edge very well. Even after several weeks of intermittent use, the edge is very sharp. It isn’t quite atom-splitting keen, but it is absolutely serviceable for any common knife task. However, I did notice that the blade has developed a few very tiny spots of surface rust. This is likely due to the fact that we’ve had a few blazing hot days when my wife and I have been hiking and the knife was exposed to a more than a bit of sweat in my pocket. While several sources indicate that this steel is fairly resistant to corrosion, owing to the 13.5% chromium in the mix, that’s not been my experience. I don’t know, maybe I have particularly corrosive sweat? 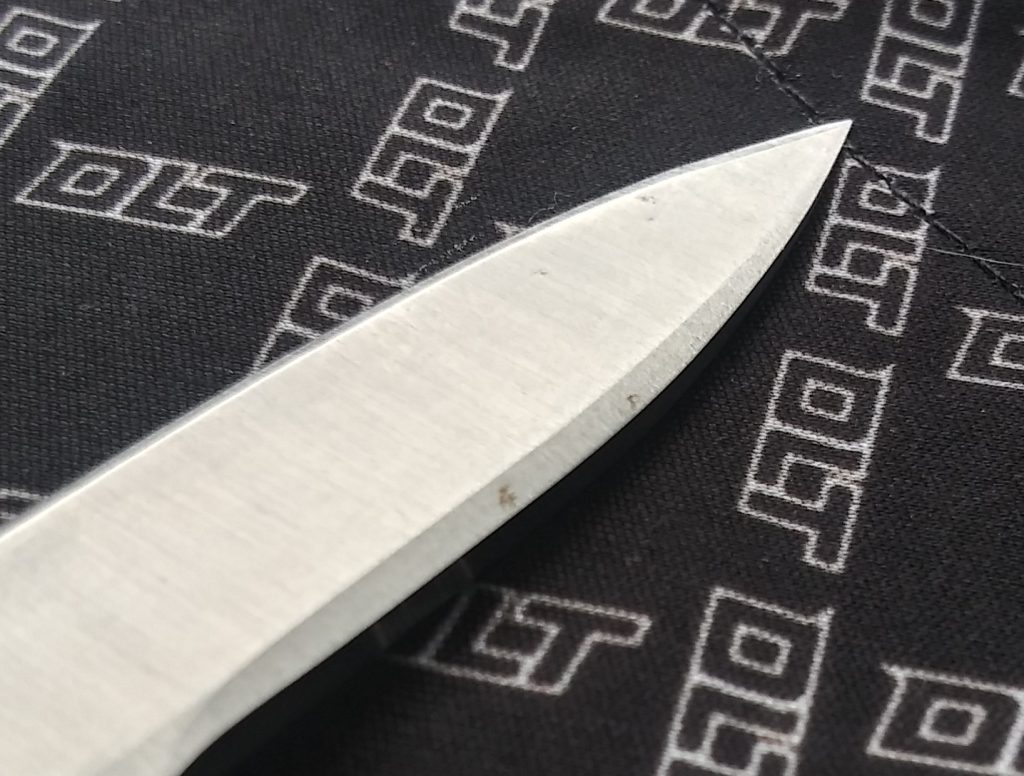 You can see a few very small areas of corrosion starting to form.

However, that hasn’t much dimmed my fondness for the Stickler. It is incredibly comfortable to use, whether I’m peeling a piece of fruit or gutting yet another box from Amazon. I just learned the hard way that I need to be a bit more careful about keeping the knife dry and wiping it clean after use.

I feel that the Stickler is an excellent choice for those who might be looking for a handsome EDC that isn’t going to see a ton of abuse. If you’re on the hunt for something you can carry to and from the office or keep for nights on the town, this is perfect. Not only will it function beautifully in such environments, but it’ll also look damn good doing it. I can all but guarantee you’ll have coworkers asking where they can get one for themselves.

However, if your primary area of operation is humid or damp, I’d look for something else. There are plenty of other options out there, many of them bearing the CRKT logo. That’s the only drawback to the knife, in my estimation.

The Stickler is a solid, dependable knife that has looks to match, no doubt about it.

Columbia River Knife & Tool was founded in 1994. It wasn’t until a few years later that the company really took off, when it debuted the K.I.S.S. knife at the 2007 SHOT Show. CRKT was inundated with orders from retailers and sold a years’ worth of production in just a few days.

Since then, CRKT has continued to add innovation after innovation to its lineup, including its Deadbolt Lock and Outburst assisted-open technology. To this day, it is one of the key stops at SHOT Show for many companies, as everyone wants to see what CRKT is up to next.

Check it out at CRKT Knives – Columbia River Knife and Tool and stick with us at Knives Illustrated – All Things Knives for everything new in the knife world.