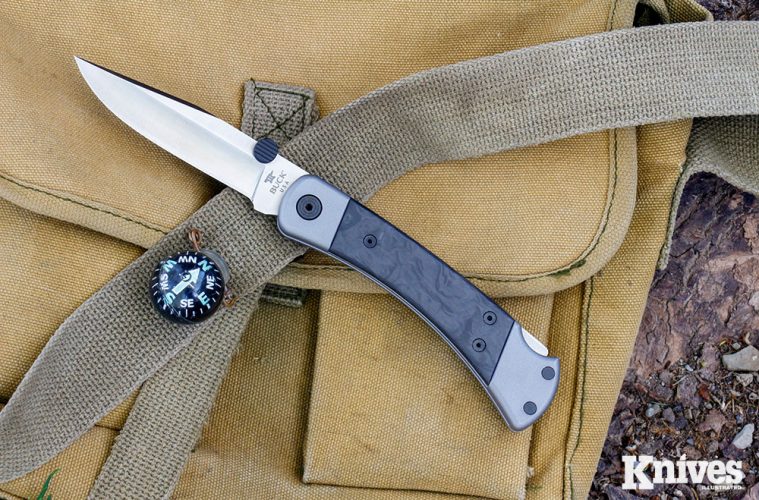 When I was a teenager, back it seems about 100 years ago, my older brother and his wife gave me one of my most treasured gifts that I’ve ever received: a Buck 110 Folding Hunter. 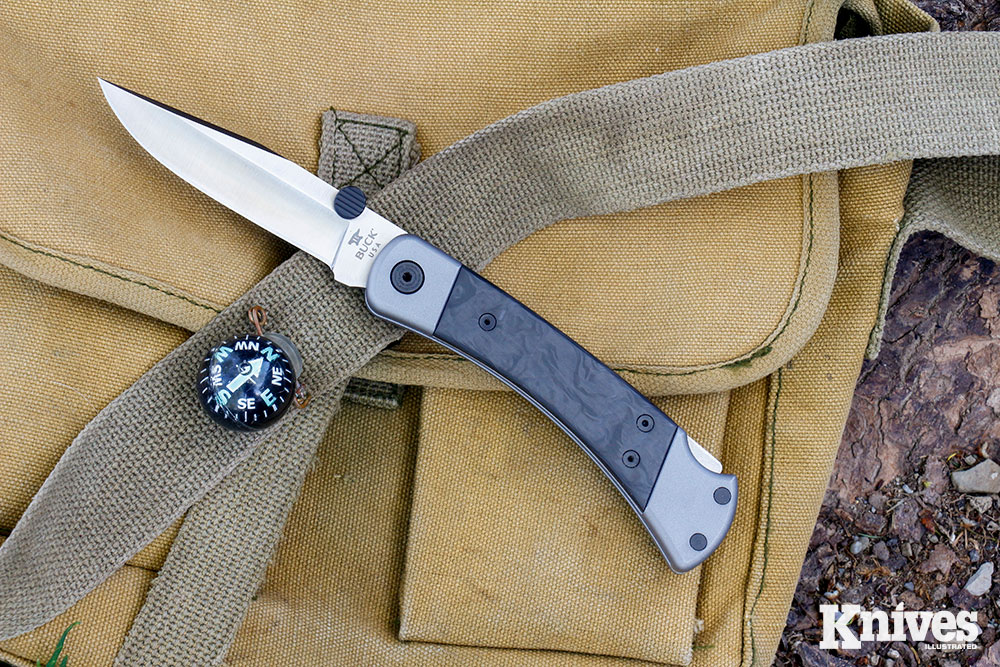 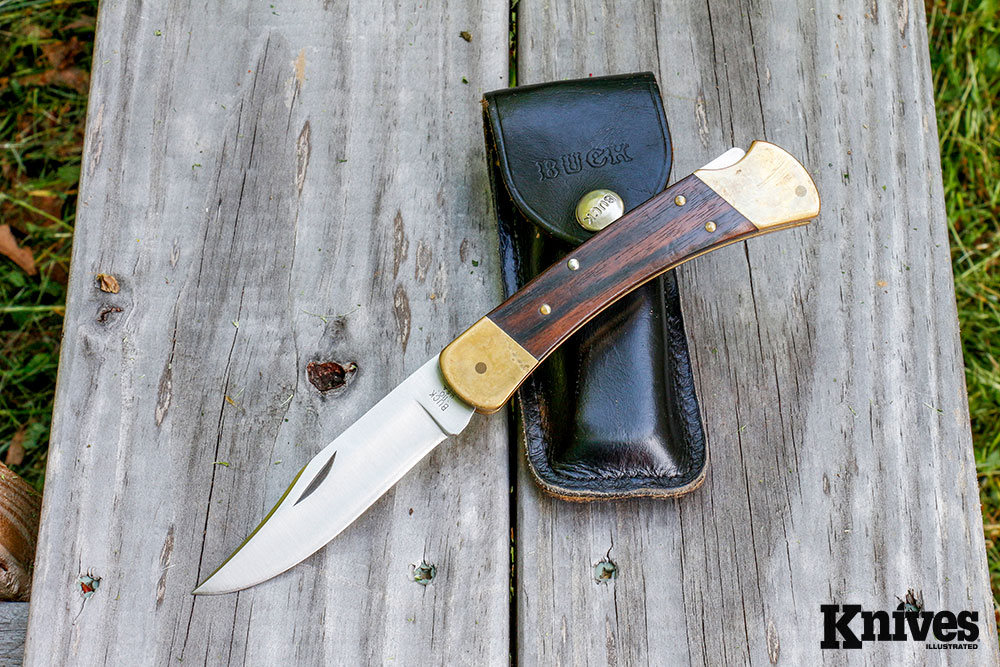 That model has stood the test of time. After all these years and so many knives later, I still carry mine at times when I’m hunting, not just for the sake of nostalgia, but because it’s still a very good knife for the purpose.

This year, Buck has released a limited edition Model 110 as part of its 2021 Legacy Collection. It differs in some substantial ways from the first models of those knives of 50-plus years ago, but what hasn’t changed is its usefulness in the field.

That first Buck 110 I received in the 1970s came as I first was becoming interested in hunting. That model, which had been around since 1963, had already made a substantial, lasting impact in the knife industry.

Here was a folder with a stainless steel blade that was configured and sized right for field-dressing big game and had a strong, secure locking mechanism.

Sure, it was heavy, approaching a half pound—a brick by today’s standards—so not many carried it in a pocket. No matter, the knife came with a black leather belt sheath. That made it easier to carry than a fixed-blade hunting knife.

It was quickly adopted not only by hunters, but by blue collar workers who needed a hard-use knife on a daily basis. When I first became a police officer in the mid-1980s, a good many cops carried the Buck 110 too, even after lighter weight locking folders became available, such as the Spyderco models that also provided the ability to open them one-handed. 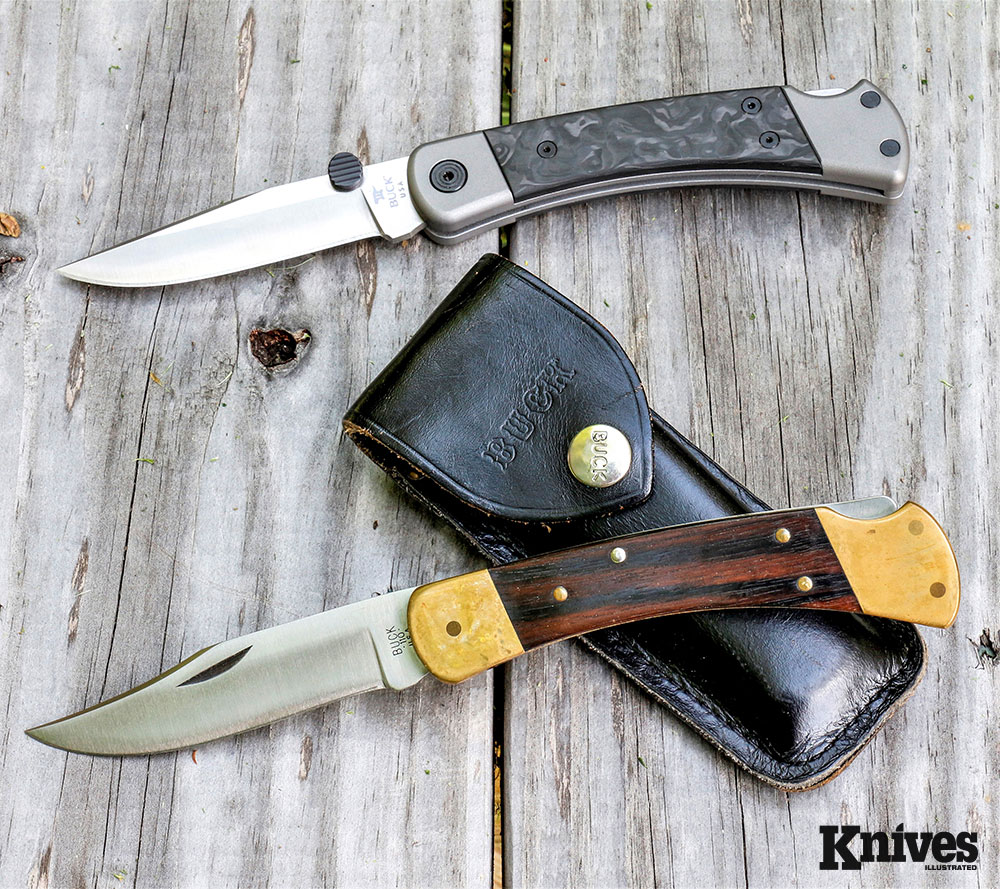 To this day, when you hold a Buck 110 Folding Hunter in your hand, it feels right. You get the notion that you have something of solid quality. It’s always been an attractive knife too, with ebony handle scales and brass bolsters. The handle is substantial enough to allow for a secure, comfortable grasp.

Too many knives these days are designed with super-thin handles for carry convenience, but often at the expense of comfort and control during extended use or tough chores.

That blade now has a device for one-handed opening: a two-sided thumb stud clamped with a tiny hex bolt to the spine of the blade. That stud is coated with black Cerakote and is angled and grooved on one side to make it easier for use by right-handed users.

“The use of those new materials… cuts the weight from 7.2 ounces for the standard model 110 to 4.8 ounces in the Legacy Collection edition.” 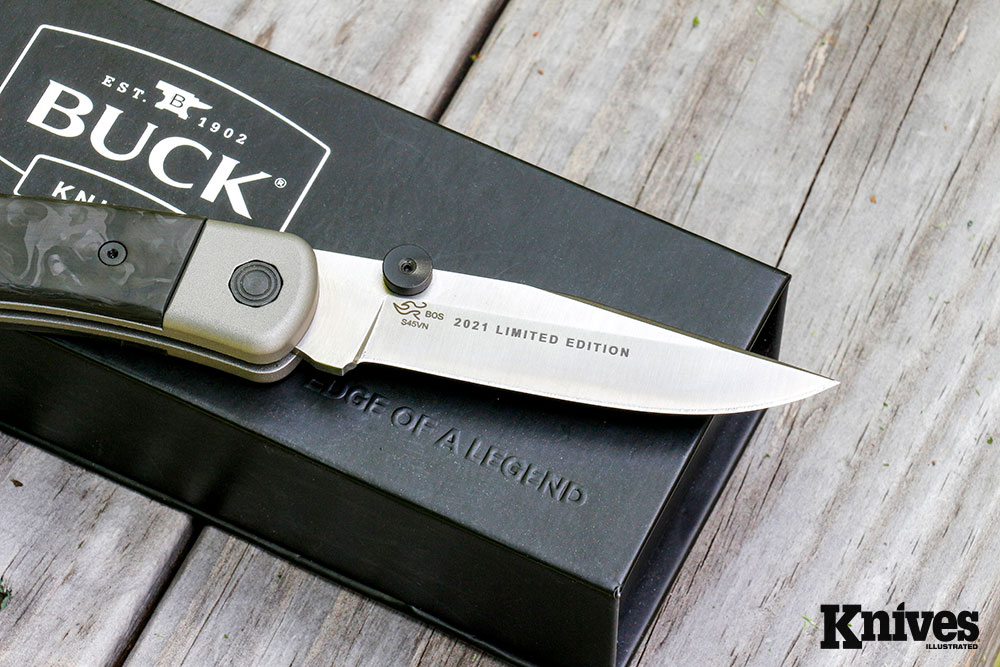 The blade of the limited edition knife has the same profile, but the steel has been upgraded to S45VN.

This limited edition knife has a very different look too. Instead of brass bolsters, it features bead-blasted aluminum bolsters for a subdued look. Instead of wood scales, this knife has marbled gray carbon fiber inlays held in place with three bolts on each side. 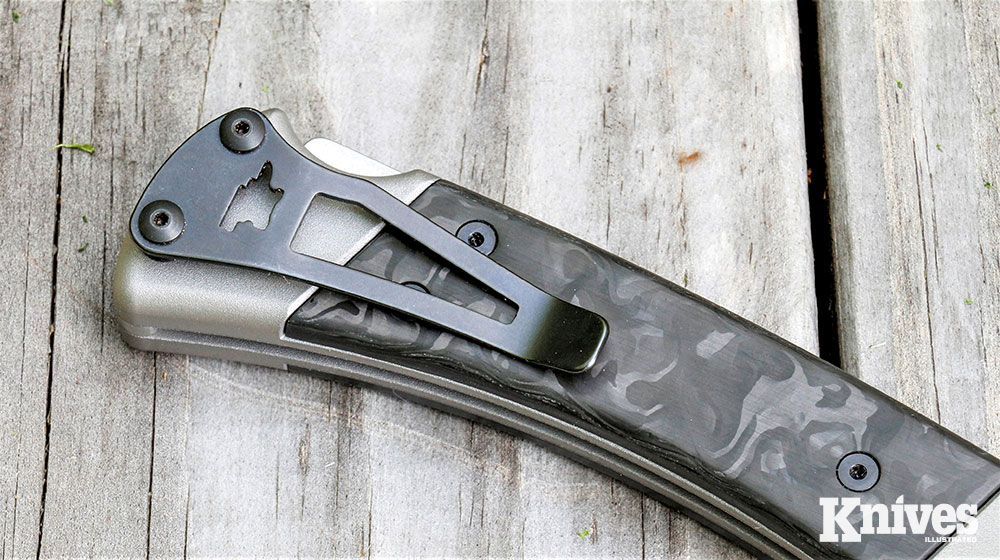 The use of those new materials not only changes the look of the knife, but it cuts the weight from 7.2 ounces for the standard model 110 to 4.8 ounces in the Legacy Collection edition.

That makes it viable for pocket carry and, as a result, the knife doesn’t come with a belt sheath. Instead, the knife comes with a sturdy metal pocket clip that’s reversible for tip-up carry.

In putting this knife to the test, the first thing to note is that the locking bar is very stiff and strong. It presents considerable resistance as it rocks back when opening the blade.

The blade locks solidly into place with a substantial, confidence-inspiring click. But if you’re used to a knife that has a free-flowing pivot that you can flip open with the flick of a wrist, you won’t find it here.

That’s not a concern for me as I view this knife as having an intended role for hunting, general field use, or on the job site. I don’t see it as a defensive blade or for a wannabe showing off in an attempt to convince people that he’s a badass. 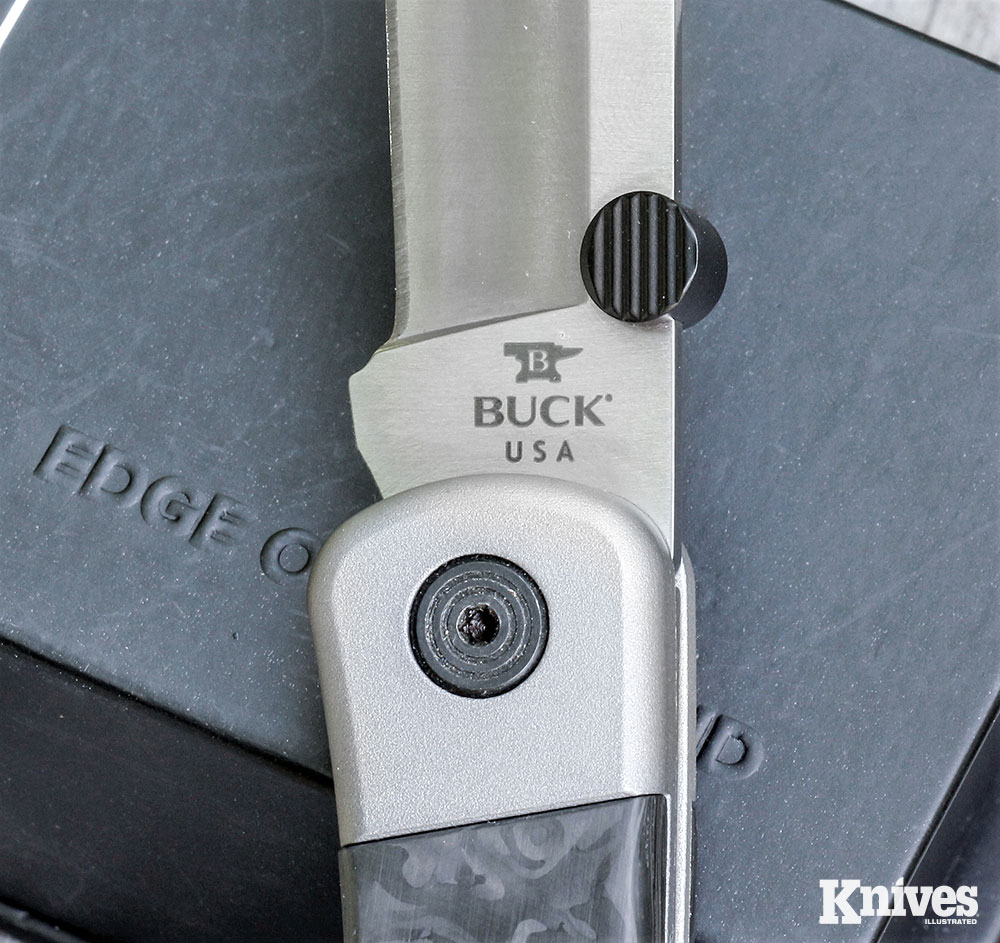 Despite the different grip materials, I found this new model to be every bit as comfortable to use. The handle allows for a full grip on the knife. It’s shaped well enough to allow you to choke up on the handle and get over the top of the blade with your thumb for more control. Yet it’s also long enough so you can inch back away from the blade when a bit more reach is needed, such as when you’re elbow deep in a deer carcass.

“…I probably could  have gone through my whole life and used nothing but a Buck 110 Folding Hunter…and…gotten along just fine.” 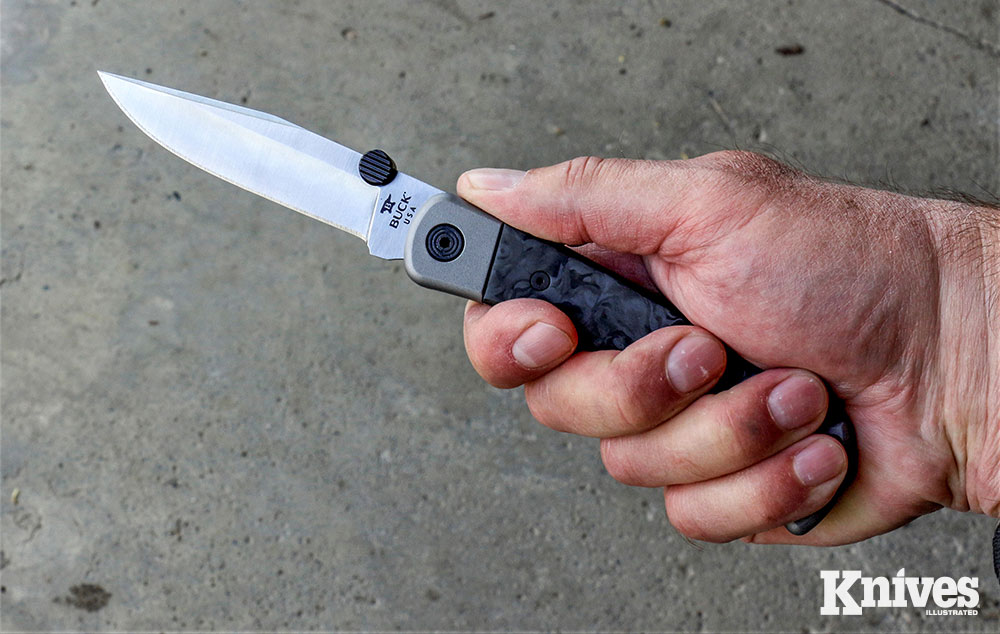 The knife fits the hand well and is long enough so you can grasp it several ways as needed.

The blade was very sharp as it came from the factory. I never had any issues with the blade on my old Folding Hunter. I not only used it to field-dress many deer but in the butchering process a number of times too.

As with all my knives, I used it, cleaned it, touched up the edge—usually on the bottom of my ceramic coffee mug—wiped it down with an oily rag, and stowed it until next time. Neglect is the worst enemy of a knife. 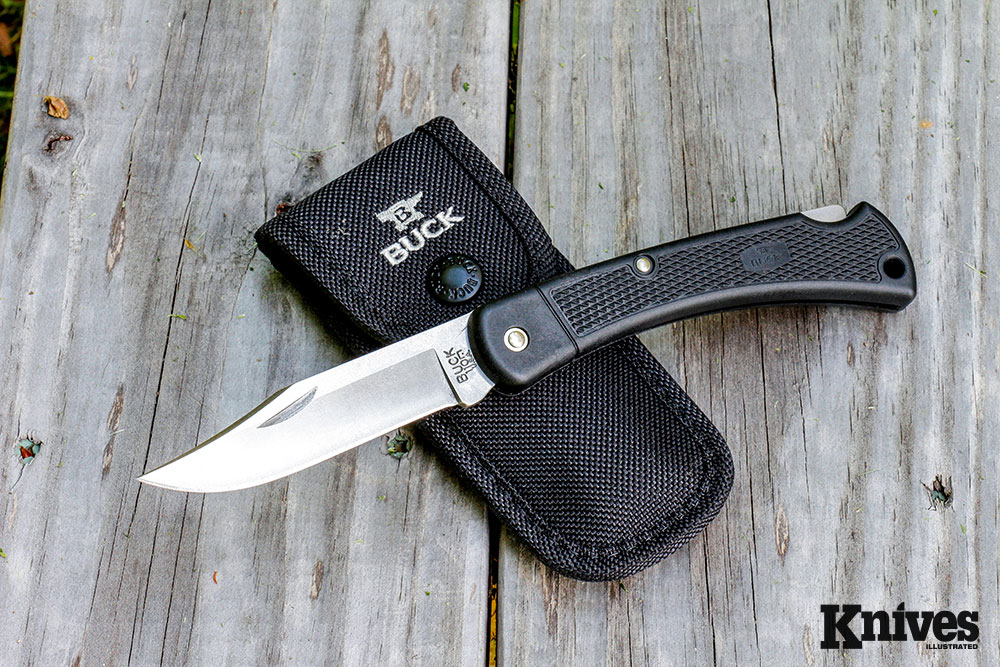 The Folding Hunter LT is a lightweight, inexpensive version of the Model 110 with a nylon handle

The upgrade of the blade steel to Crucible’s S45VN in this new model, however, is a welcome change as it should boost edge retention, toughness, and corrosion resistance. It readily cut everything around the house that my wife would allow me to destroy. I haven’t needed to touch up the blade yet.

I’ve used many knives through the years. And I’ll continue to enjoy many brands, styles, and designs. But I’ve often said that I probably could have gone through my whole life and used nothing but a Buck 110 Folding Hunter for all my knife needs and would have gotten along just fine.

While I am glad for the variety of knives I own, the several Buck 110 Folding Hunters I have will continue to have a special place among my collection. This limited edition 2021 Legacy Collection knife looks different and has been modernized and updated. But it’s still a Buck 110 Folding Hunter at heart and that’s what’s important to me.

THERE ARE OTHER MODEL 110s TOO

Buck Knives offers several Model 110 knives in its catalog these days. There’s the 110 Auto and Auto Elite for those who favor an automatic opener and are allowed to have them.

At the other end of the spectrum is the Folding Hunter LT, a 3.2-ounce lightweight with nylon handle and polyester sheath. It’s the least expensive of the 110s at a suggested $32, but it’s every bit as useful.

Yes, the original Folding Hunter is still available, although Buck rounded the bolsters on this model years ago. There’s a model with S30V steel and nickel silver bolsters, the Folding Hunter Pro, and a 110 Slim Pro with Micarta handle scales.

The 110 Slim Select has a nylon handle. For those who don’t want a clip-point blade, there’s the Folding Hunter Drop Point. Or you can start from scratch and order a custom 110 and choose among several options for your own steel, handle material, sheath, and engraving.