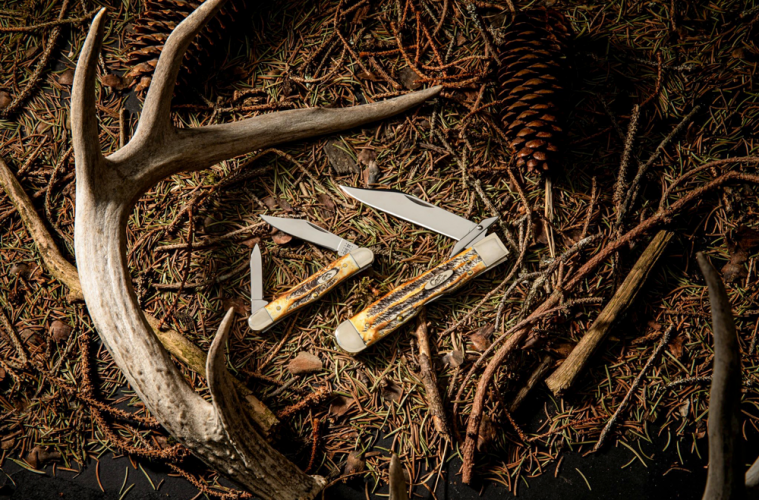 NOT JUST FOR COLLECTORS: TRADITIONAL FOLDERS FROM W.R. CASE & SONS ARE MEANT TO BE USED

You might subscribe to the view that a pocketknife is just a tool like any other. But I think a pocket knife is more than that. I would never marvel at the beauty of a screwdriver or hammer if it came with an elegant jigged bone or stabilized burlwood handle. I wouldn’t save my pennies so one day I could own a box cutter made with Damascus steel.

Yes, more than anything a pocket knife tends to be an everyday companion that helps you to complete simple cutting tasks. But no one says it needs to be ugly. These days I normally carry two knives.

OK, one I do keep ready for the possibility of unavoidable interpersonal conflicts. The other, the one that actually gets used, is most likely to be a simple but elegant folder from W.R. Case & Sons Cutlery.

In 2019, Case resurrected its Barlow knife pattern for a limited run. The author acquired these while they were still available.

A TOUCH OF CLASS

In life’s struggles that entail endless hours of tedious work to earn a few minutes of soul-restoring leisure, it’s reassuring to have a reminder of the nice things. It’s even better to carry one of those nice reminders in my pocket.

I can turn a Case folder over and over in my hands and appreciate its timeless design, fine craftsmanship, and artistic beauty.

I can also take comfort in knowing how useful my Case knives have been. We have a history together, this one I’m holding now and the countless others I’ve carried.

A Case knife is like a dependable old friend who has shared many experiences with you and has been at your side through good times and bad. 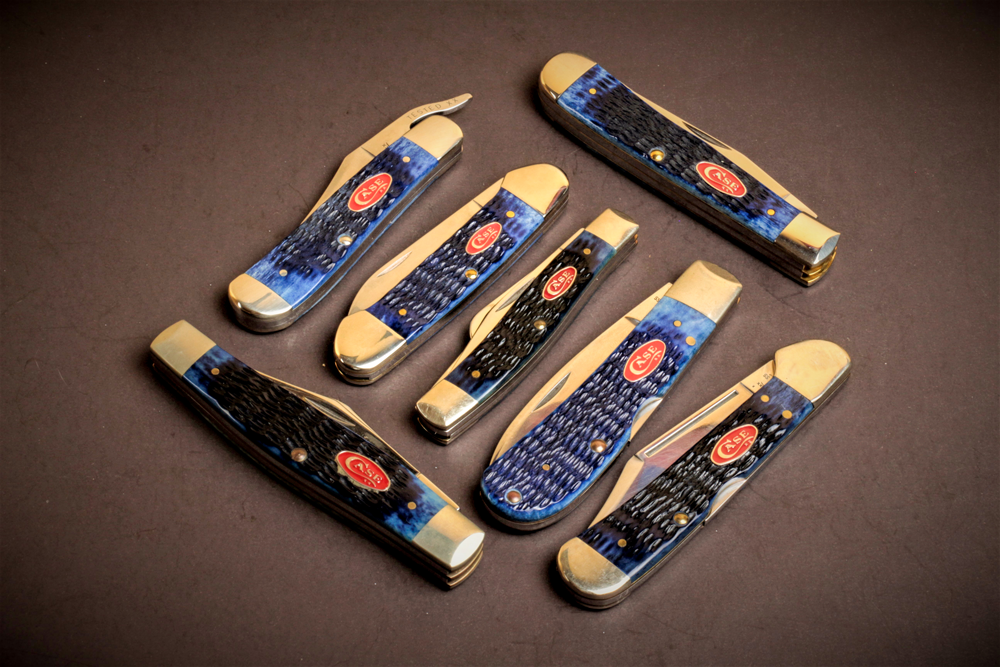 The author likes Case knives with blue bone handle scales and the red Case shield. He adds one to this group whenever he can.

In this day of the “tactical folder,” a traditional Case pocket knife might be dismissed by some as being merely a “grandpa’s knife,” a vestige of the past.

Look at any of the mindless online video knife reviews, and you’ll see that what’s prized above all else is how fast you can whip the blade out and how badass it makes you look to flash a gruesome blade around.

I carry and use a pocket knife every day, and I’m trying to recall a time when the fate of the world depended on me being super-fast to deploy my knife to open a package.

And consider that people around you are more likely to see you as a jerk than a badass when you start brandishing a pig-sticker around to cut some twine. 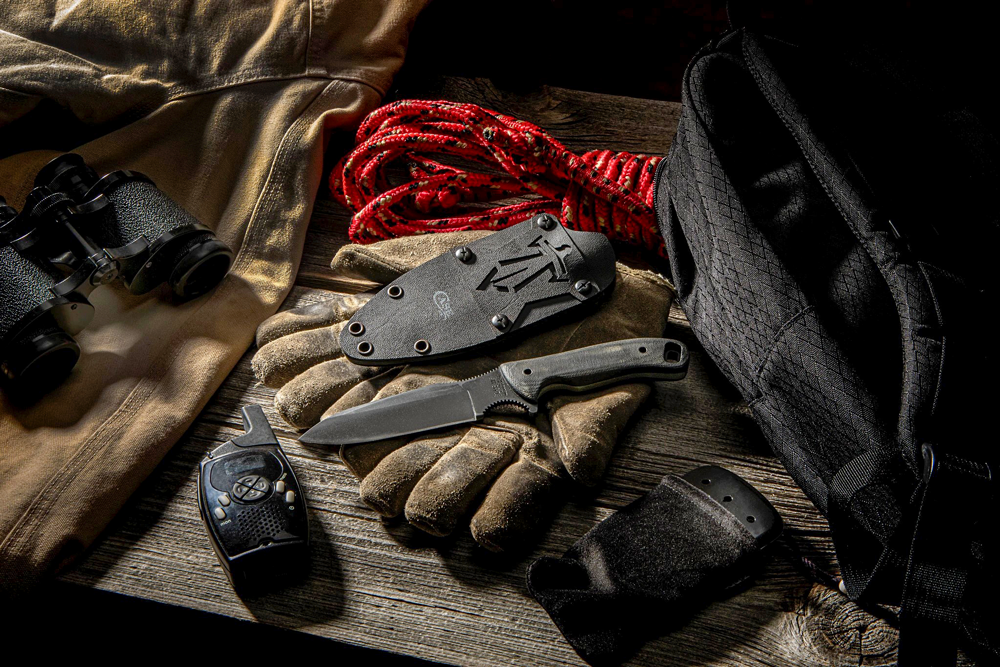 Case makes more than slip-joint folders. This Kyle Lamb Hunter, part of the American Hero Series, is one of the collaborations between Case and Winkler Knives.

To be honest, there aren’t that many times, day to day, when I even need a locking blade. I’m not sloppy with my knife-handling skills and I’m not stabbing too many things these days.

If I’m elbow deep in a deer carcass, no I don’t want a blade closing on my fingers. But in those cases, I’m apt to choose a fixed blade anyway.

QUALITY MARKED WITH AN “X”

Case has been making knives for more than 130 years. And the company has been making them in the U.S. According to Case, each of its knives goes through 160 manufacturing steps to completion.

The famous Case XX trademark originated from a time when the blades were marked with an “X” as being quality checked after each part of the two-step heat-treating process.

Most of its traditional folders use either Chrome Vanadium steel—easy to resharpen—or its Tru-Sharp Stainless Steel, a high carbon steel that holds an edge well and is more corrosion resistant.

The company uses many natural and synthetic materials for the handle scales, with cattle bone, stag antler, and buffalo horn being very popular.

Case makes about 80 knife patterns and many of them are folders of traditional, classic designs. Trapper, canoe, stockman, Barlow, whittler, peanut, sodbuster, Texas toothpick—Case has made them all.

They’re classic; they’ve stood the test of time because they’ve continued to be useful. I’ve often carried a three-blade stockman when small game hunting. I tuck a thin Sod Buster Jr. in my dress clothes for a night on the town.

The small, two-blade peanut fits perfectly in a vest pocket or the change pocket of my jeans. Right now, I’m carrying a two-blade Barlow with 6.5 BoneStag handle (bone made to look like stag).

I wish I could say one of my ancestors lent his name to the Barlow pattern, but that’s not the case. I’ve carried one since I was a kid and I’ve always liked the way the rounded Barlow fits the palm of my hand.

Just because I’m focusing on traditional pocket knives, don’t get the idea that Case makes nothing else.

Over the years, Case has made about every type of knife you can imagine, including hunting knives and military blades. And Case has been collaborating with other makers for years to turn out some very special blades.

The company has what has turned into a yearly collaboration of limited production knives with Master Bladesmith Tony Bose. And its American Heroes Series features knife creations between Case and Winkler Knives. 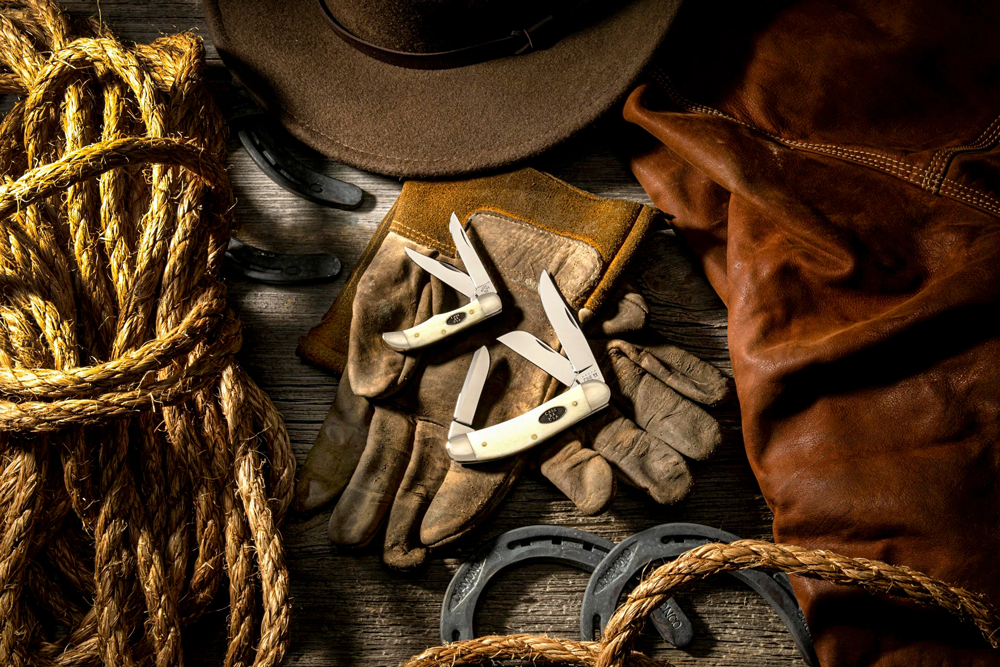 These smooth natural bone-handled Case folders have Chrome Vanadium blades that are easy to resharpen.

To me, some of the best Case pocket knives blend traditional style with modern features. If you don’t want a slip-joint folder and feel more comfortable with a locking blade, Case offers the CopperLock, TrapperLock, RussLock, Mid-Folding Hunter, and Cheetah models.

The CopperLock, with back lock, is one of my favorite slim folders. The TrapperLock, with liner lock, has a thumb stud for one-handed opening and is about the smoothest opening knife I’ve used.

The RussLock features a unique extension at the back of the blade for one-handed opening. And the Cheetah has a folding guard that locks into place when the blade is opened.

Still thinking you’d like a fast-opening knife? Case makes Kickstart versions of its Mid-Folding Hunter and TrapperLock patterns that are assisted-openers.

HOW DID I GET SO MANY?

I’ve never considered myself a collector of anything. I’m more of an accumulator. But there are plenty of people who collect Case knives—more than 19,000 in the Case Collectors Club alone.

For many years, I never understood the collector mentality. Why collect something to store or to display, but never to use?

“I can turn a Case folder over and over in my hands and appreciate its timeless design, fine craftsmanship, and artistic beauty.”

Then I received a Case medium stockman with Navy blue bone handles and a red Case shield from my wife as a gift. Suddenly, I find I now have seven Case knives, all of different patterns, but all with the same blue bone handle and red shield.

Of course, anything blue is usually OK with me. But I never set out to collect them. When Case announced it was going to resurrect its Barlow pattern for a limited run in 2019, somehow I ended up with a half dozen of those. Those are in addition to a bunch of other Case knives I own. So, am I a collector?

If you like a particular pattern, say the trapper, and decide you want to collect every Case trapper with every handle and shield variation, you could go absolutely crazy tracking them all down. 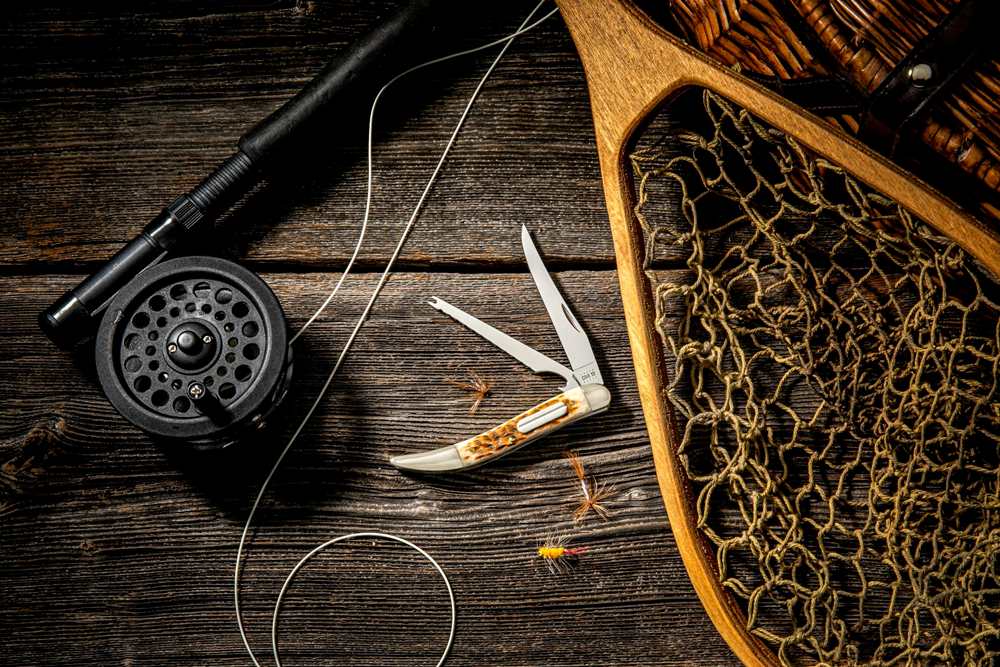 Case makes some specialty folders too, including this fishing knife with built-in hook sharpener

Another item of special interest to collectors is the tang stamp. Case used many different tang stamps over the years, and you can often find approximately when your knife was made by that stamp.

Beginning in 2000, the company used a system of five dots and five stars. There are too many tang stamp patterns and codes to detail here. After all, Case has been making knives for more than 130 years. Shepherd Hills Cutlery has lots of information on this subject on its website, however.

MORE IN MY FUTURE

Whether I’m an informal collector or just an accumulator, one thing’s for sure: I’ll continue to acquire Case knives.

Another guarantee is that I will carry them and use them and won’t mind the little scratches and other signs of wear.

I’ve been acquiring my own scars and signs of wear through the years. They’re all there as memory markers of the continuing adventure. 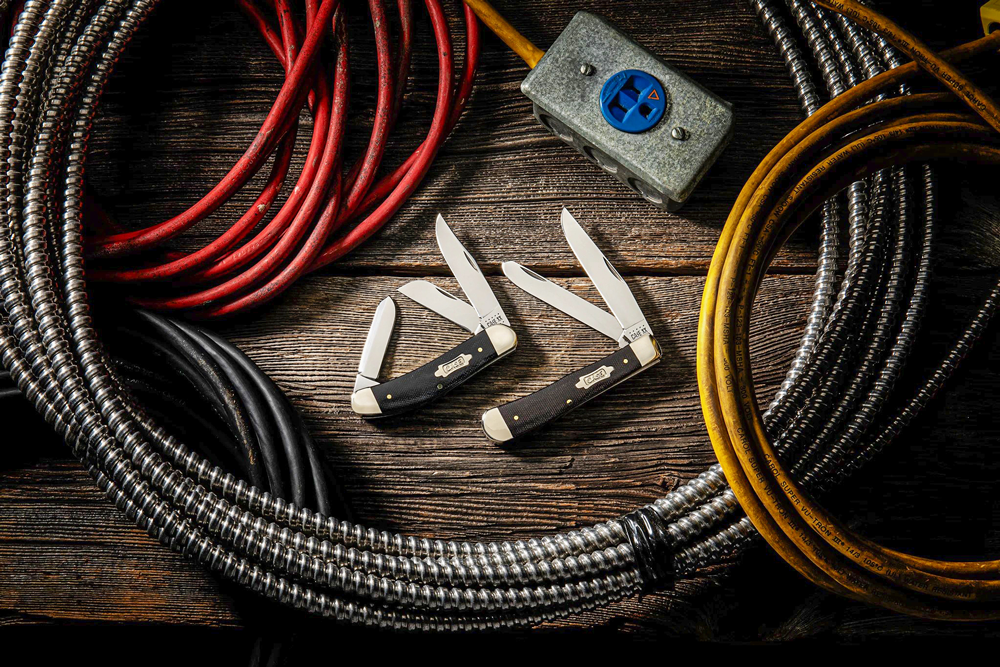 Case knives are always ready to put in a full day’s work. 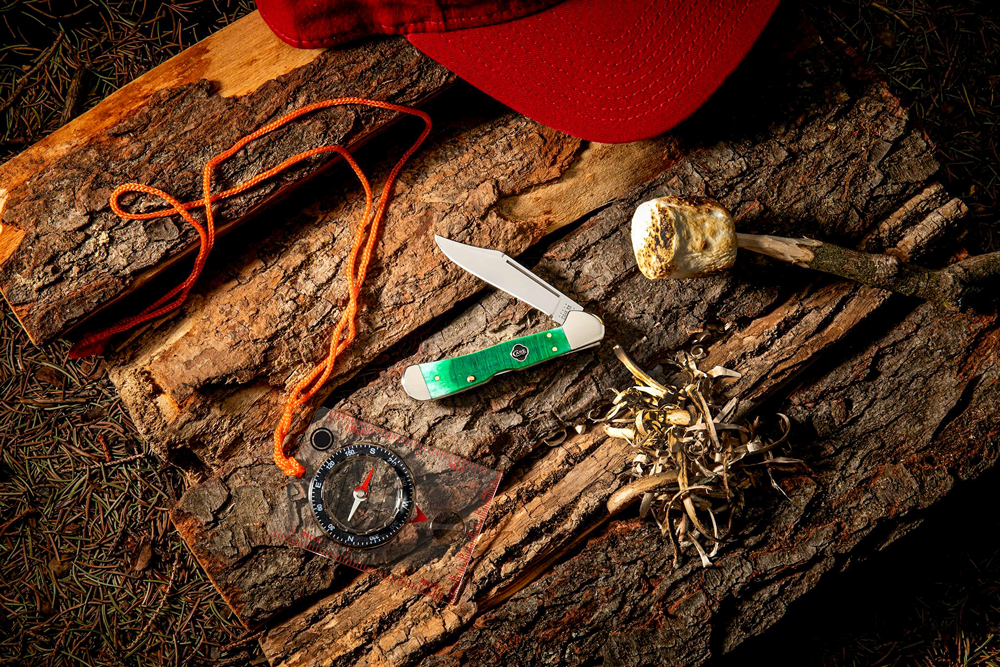 Case knives are naturals for those who travel off pavement. 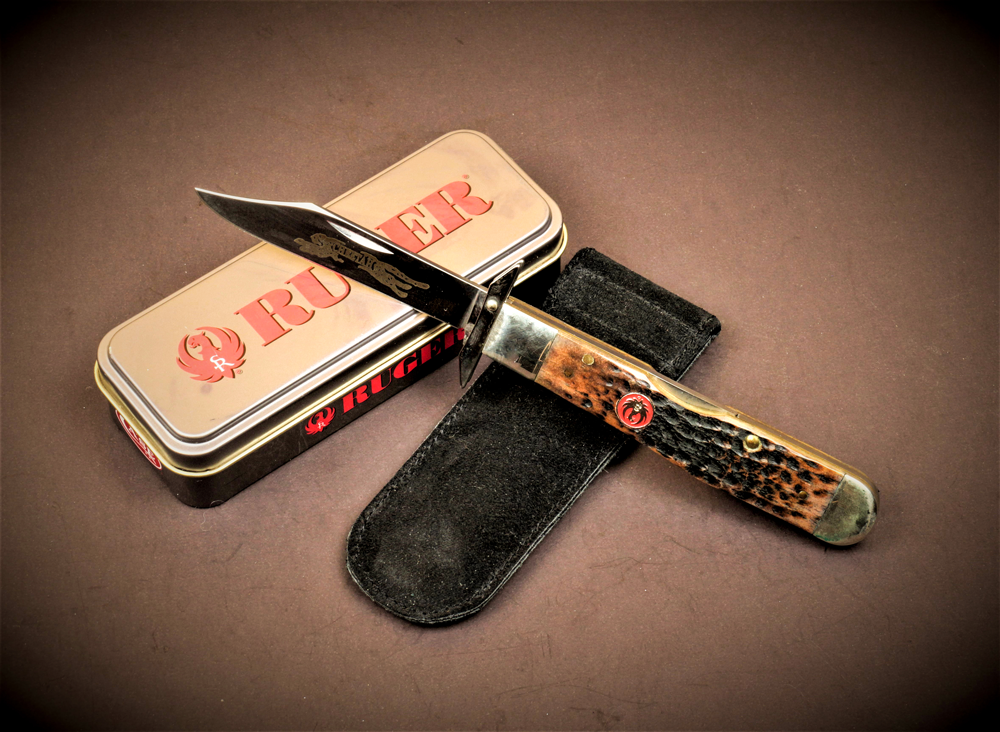 The author’s family gave him this special Ruger edition of the Case Cheetah. 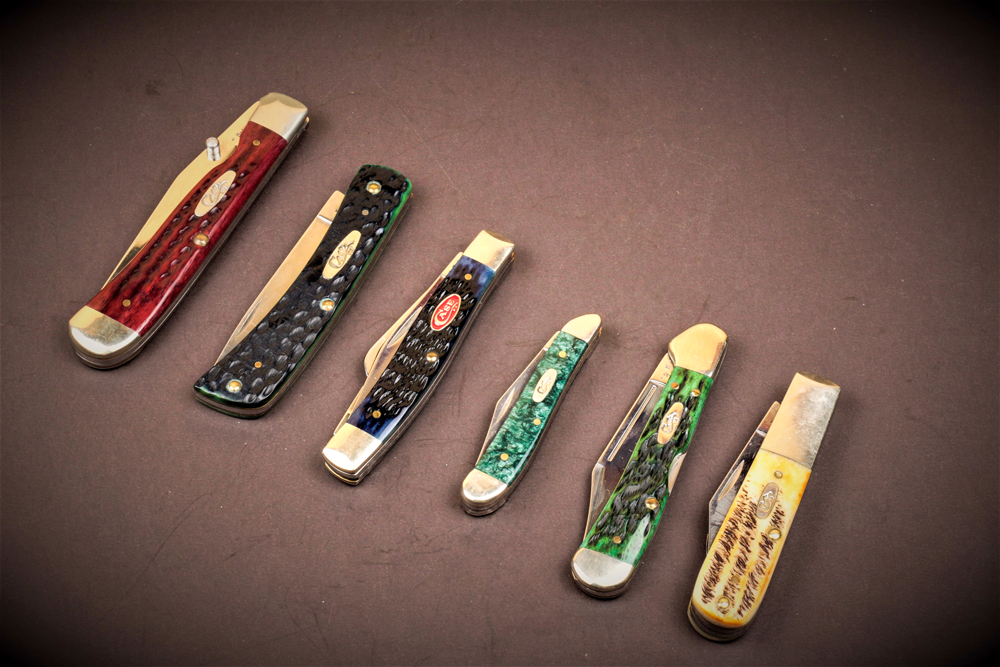 These are among the author’s current favorites among the Case knives he owns.

DUE FOR A VISIT TO THE ZIPPO AND CASE MUSEUM

As a fan of both Zippo and Case, I’m overdue for a visit to the Zippo/Case Museum in Bradford, Pennsylvania. The museum consists of 15,000 square feet of historical exhibits on Zippo lighters and Case knives.

The story of Case knives begins with the four Case brothers—William Russell, Jean, John, and Andrew—who back in 1889 started selling handcrafted knives out of the back of a wagon along a trail in southwestern New York State.

The company moved to Pennsylvania in 1905. Today Case is owned by another Bradford, Pennsylvania-based business, the Zippo Manufacturing Company.

EXCLUSIVE KNIVES THROUGH THE COLLECTOR’S CLUB

Collecting Case knives can be addicting. If you’re exposed to this lifelong affliction, you might as well join the Case Collectors Club, where you won’t find a cure, but you will be able to commiserate with your fellow Case fanatics.

As a member, you will receive the club’s quarterly magazine and annual catalog. You’ll have access to their online forum, and you will have the chance to acquire member-exclusive limited production knives. The annual membership dues are $20.