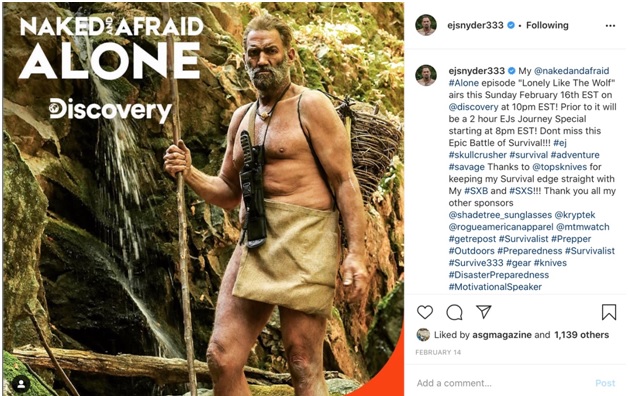 Balkan Wilderness Takes EJ Snyder to the ‘Edge of Survival’

‘Edge of Survival’ columnist EJ Snyder sat down with ASGTV’s Amber Hargrove to dish on the backstories behind his latest adventures on the Discovery Channel—Naked and Afraid: Alone.

EJ’s episode—and, with apologies to other fine survivalists—no doubt the best episode is S11: E6, ‘Lonely Like A Wolf.’

EJ had survived in prior seasons of Naked and Afraid, but always as part of a group. In Bulgaria, he was all by himself.

“It’s always nice when people have your back,” he says in a trailer for the episode’s Canadian premier, especially when you’re dealing with creatures like “the Bulgarian hogs.” 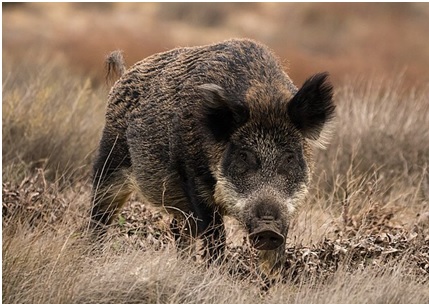 Spoiler Alert: The typical Bulgarian wild hog, pictured here, weighs 450 pounds and is “very aggressive,” EJ says. Before EJ went to Bulgaria, he thought they’d be a great animal protein source for him. “I have a special plan for these Bulgarian hogs,” he says in the trailer.

But when it comes to survival, even the best laid plans go awry. When he got to Bulgaria, EJ soon learned that Bulgarian wild hogs “only come out when it’s pitch black.” Their nocturnal habits rendered his bow useless.

As Knives Illustrated readers know, EJ always has a hack or two up his sleeve, even when he’s without actual sleeves. His backup plan was to build a weighted spike trap from logs and and snare wire. When a band of hogs wandered into the trap, he theorized, it would ensnare at least one of them.

But feral hogs in the Balkan mountains are endangered, and snare wire is therefore illegal. He was going to have to use 550 paracord instead. But wild hogs chew through 550 easily. Therefore, the hogs were off the table.

Smaller mammals in Bulgaria’s Balkan Mountains region are also protected from being hunted. “So I was left to be a vegetarian, which I’m not a big fan of because I am a large guy,” he says. He was a smaller guy when he left the wilderness, having lost 52 pounds.

The Balkans survival stint has been his toughest Naked and Afraid challenge so far, and it wasn’t because he was alone, EJ reveals. “Bulgaria itself, I don’t think, wanted me there. It tried to spit me out every day.”

The moist climate, for example, meant he had to build fires the primitive way and had only a two-hour window every day to make coals. It was “a very desolate place,” he says.

Look for EJ’s ‘Edge of Survival’ column in every issue of Knives Illustrated. And, if you haven’t seen EJ’s Skullcrusher and Sidekick knives (TOPS), here he is with both: 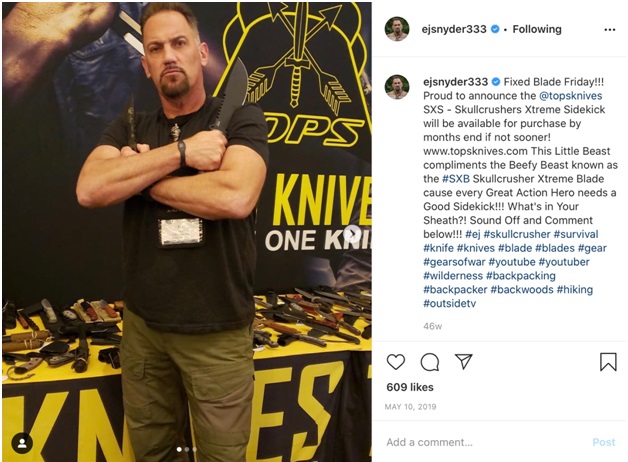 He does some survival product endorsements, including dehydrated food and a water-bottle filter available on his web site.

He also does survival training, treks, and motivational speaking. And he’s planning some more television appearances, but “thanks, corona!—those will be on hold for a little while,” he tells Amber.

EJ was an Army ranger, a combat veteran who retired as a Sergeant Major after a 25-year military career. And he’s got some advice for Americans looking to fight coronavirus. We’re all in this battle together. Everyone around the world is fighting a common, viral enemy.

“A new virus like this that is highly contagious,” EJ explains. “We need some time to get ahead of it.” Social distancing is key if you’re not working at a health care facility, as a first responder, or in a business that your state or local government has designated as “essential.”

“The government is just trying to slow this thing down until we get a handle on this.” The more that those of us who can stay put actually do stay put, the more resources are available for health care workers and first responders who get sick because they are out taking care of everyone else.

Many of us are lucky enough to have immune systems that protect us from COVID-19. (CDC director Dr. Robert Redfield said today that as many as one in four of Americans may be carrying the virus without having any symptoms.) “This is about protecting the vulnerable—the very old, the very young, and those with compromised immune systems,” EJ says.

“We will see a nice, very progressive attack on this virus, so just do the things [public health experts] say,” EJ urges during the interview, which was filmed earlier this month. (Today, as we post this, we’re seeing early signs— including fever data—that social distance efforts are helping to “flatten the curve.”)

And people, EJ urges, stop buying all the toilet paper. “I don’t know who started that,” Amber marvels.

Buy only the supplies you need. “Everyone stay safe out there and take care of each other,” he says.

“This is a change of life for a temporary time. Life will get back to normal. We will get through this.” Take it from a guy who’s braved the Balkans and more.