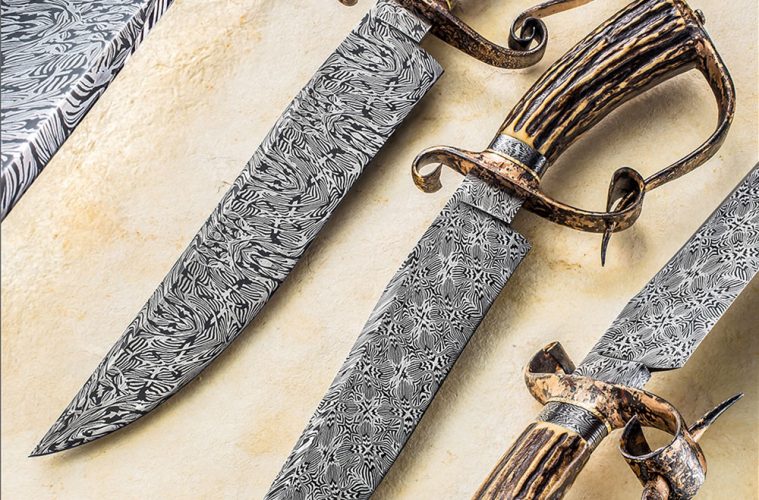 Meet the makers who keep the fighting bowie knife alive

STORY BY JASON FRY, PHOTOS COURTESY OF THE MAKERS

Bowie knives have been legendary since the Sandbar Fight and the Alamo. From the original James Black to the late John White, from Karl Andersen to Michael Zieba, there have been many interpretations of Bowie’s knife.

While the modern definition of “Bowie knife” is a bit flexible, the basic parameters are that a Bowie is a large knife, often with a clip or drop point, and typically includes a guard. 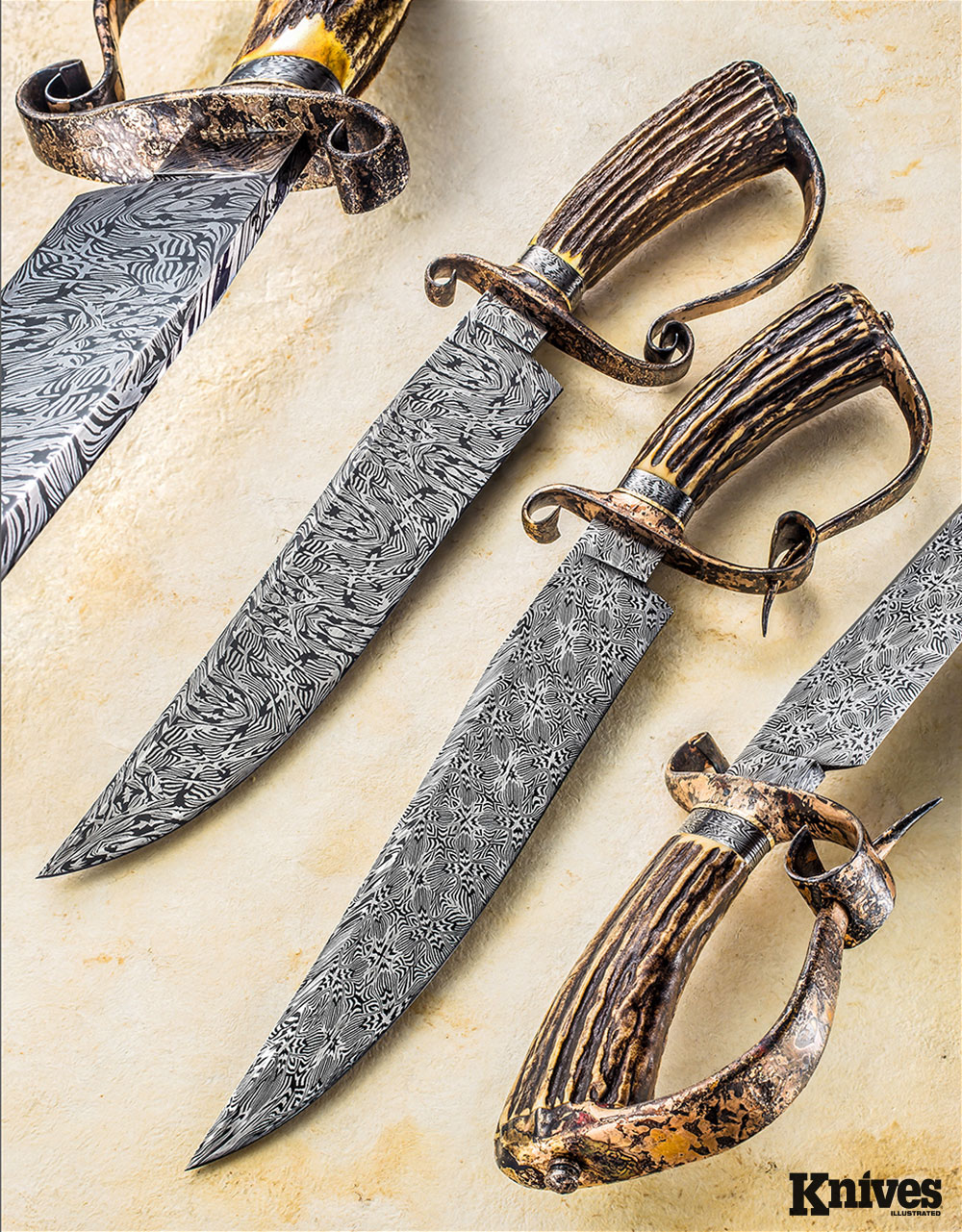 The Bowie knife holds a special place in American history. From the 1830s until the advent of reliable repeating handguns in the 1870s, the Bowie was the preferred choice of self-defense weapon. A Bowie was more than just a sidearm; it also served as a tool for skinning and butchering, camp work, and a variety of lifestyle tasks. And, it was always ready, and it didn’t require ammunition. Also, it was carried by gentlemen and ruffians alike.

Although the Bowie knife is a historical classic, the envelope of Bowie design and quality is constantly being pushed by modern makers new and experienced.

Here are four interpretations of the Bowie by four up-and-coming knifemakers, along with pieces from the legendary makers who inspire them.

While all these knives fit the Bowie moniker, notice the variety of designs and styles among these examples of the genre.

Paul DiStefano is a freshly minted American Bladesmith Society (ABS) Journeyman Smith who hails from New York City. He is a New York City EMT in his day job. He forges his own Damascus and does his knifework in his home garage.

“Although the Bowie is a historical classic, the envelope of Bowie design and quality is constantly being pushed by modern makers new and experienced.” 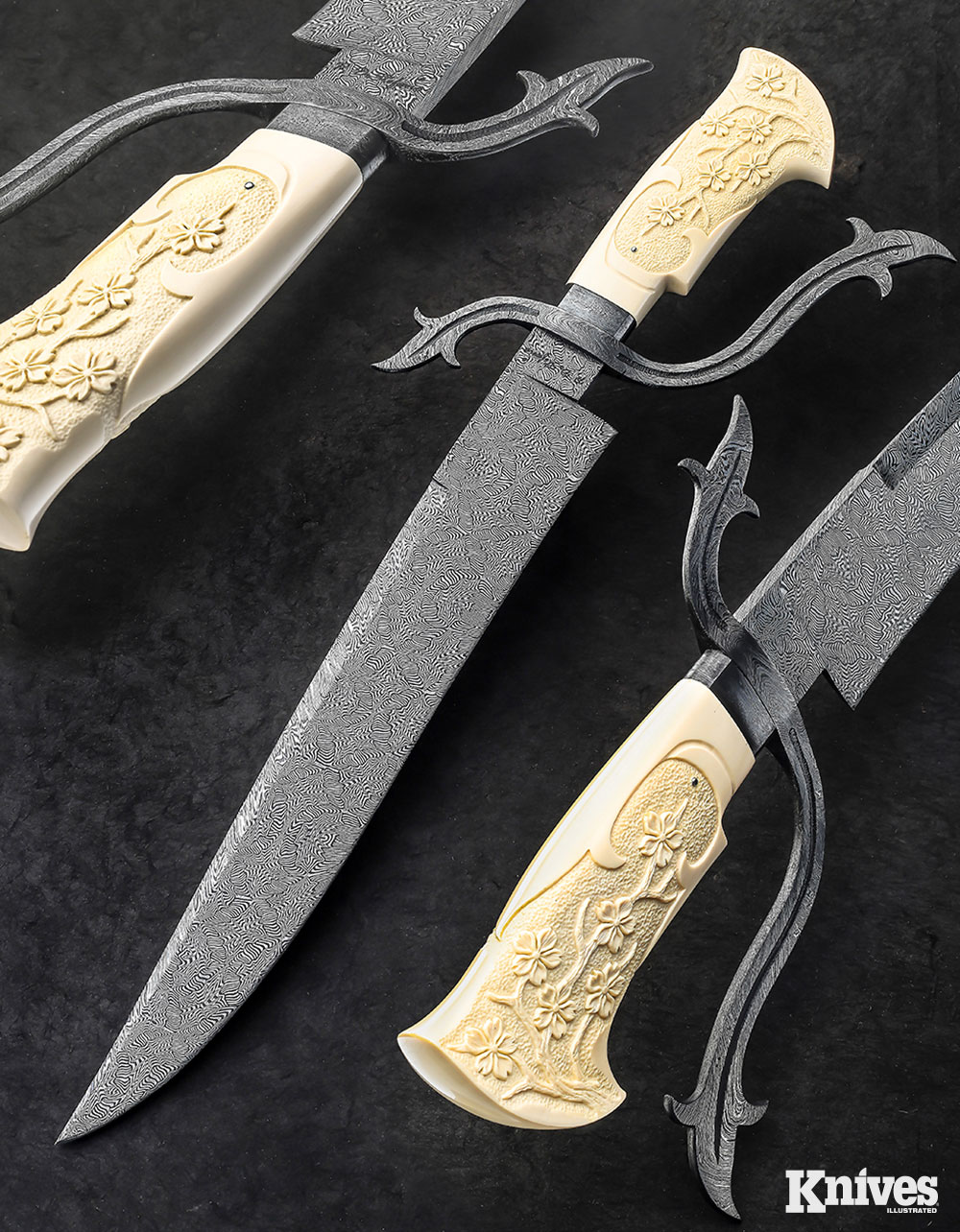 “I don’t really have anyone whose style I emulate,” he said, “but I do have Master Smith David Lisch in mind. You can immediately look at a Lisch knife and recognize the maker by the style. That’s what I aspire to, to have a recognizable style. I want people to look at a picture and immediately think, ‘That’s a Paul DiStefano knife!’”

Kelly Vermeer-Vella makes a first impression as soft-spoken and humble, but her Bowie knives are anything but quiet. You’d never know just by looking that she has quite the professional resume. She’s an ABS Journeyman Smith, and a Journeyman certified farrier. She competed internationally as a farrier and won fourth place in the 1997 world championships. She also was a competitor on “Forged in Fire” twice, including the first “Beat the Judges” episode. 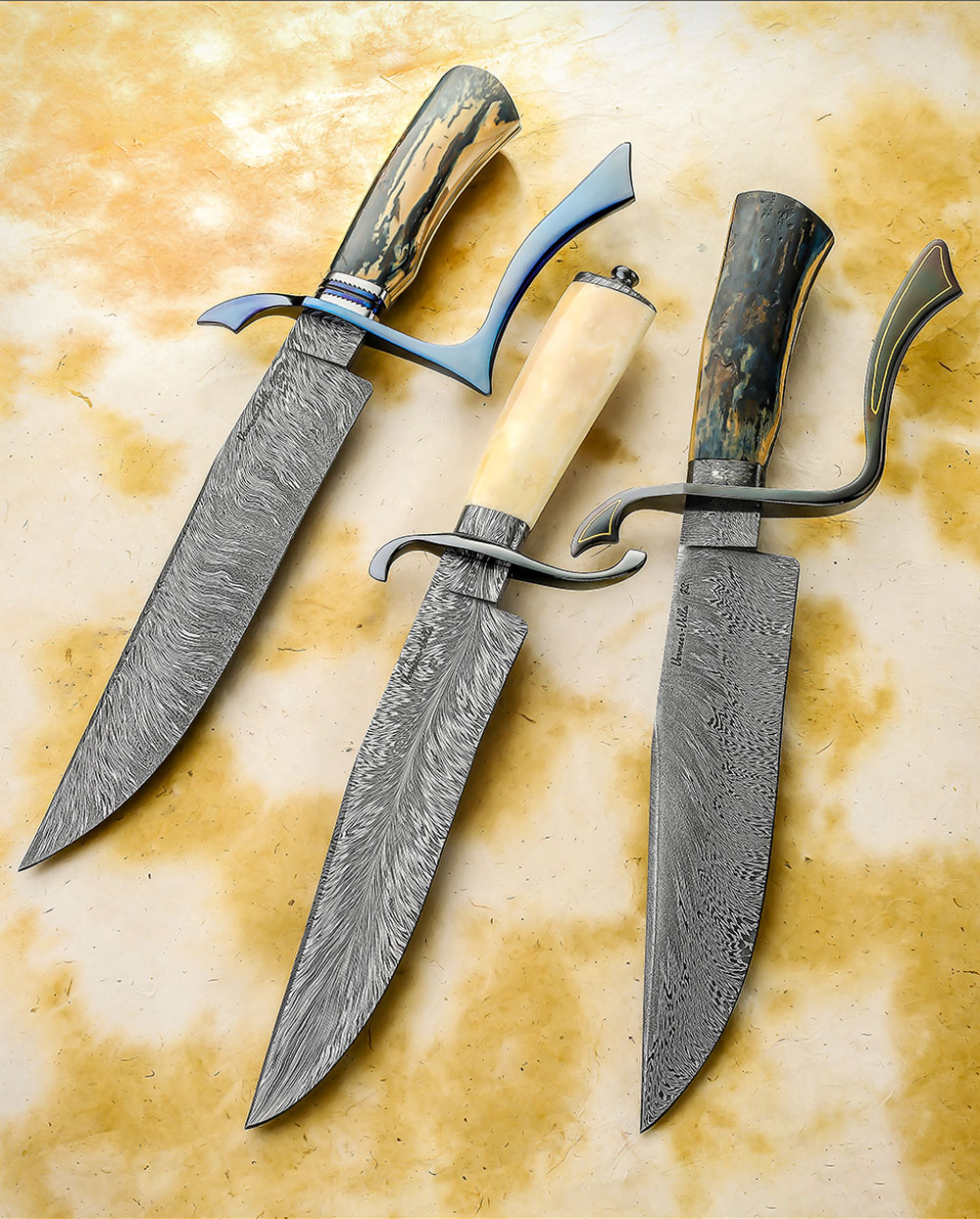 This trio of fine Bowies by Kelly Vermeer-Vella shows off her skill in complex Damascus patterns. She also has uniquely styled guard fittings on many of her pieces. SharpByCoop photo. 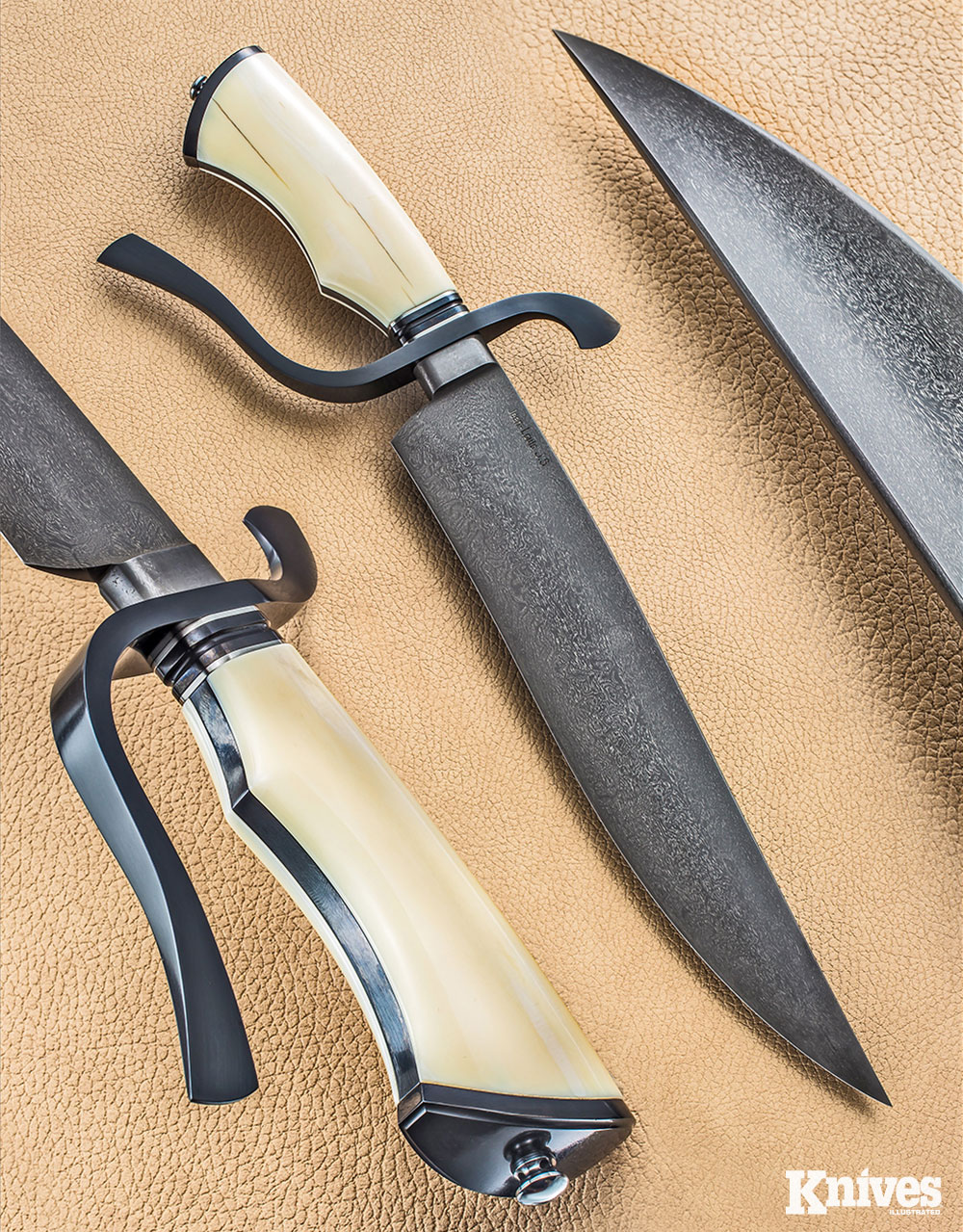 “I got spoiled by hanging out with top level knifemakers from the beginning,” she said. “I have a long list of superheroes, but I’d say Jean Louis Regel has been a big influence.”

Journeyman Smith Ben Breda is a full-time bladesmith from Maine. Ben decided that he wanted to be a knifemaker, and he sought out a knifemaking education from the New England School of Metalwork.

“Handmade and custom Bowies bring a modern interpretation and artistic flair to the classic designs.” 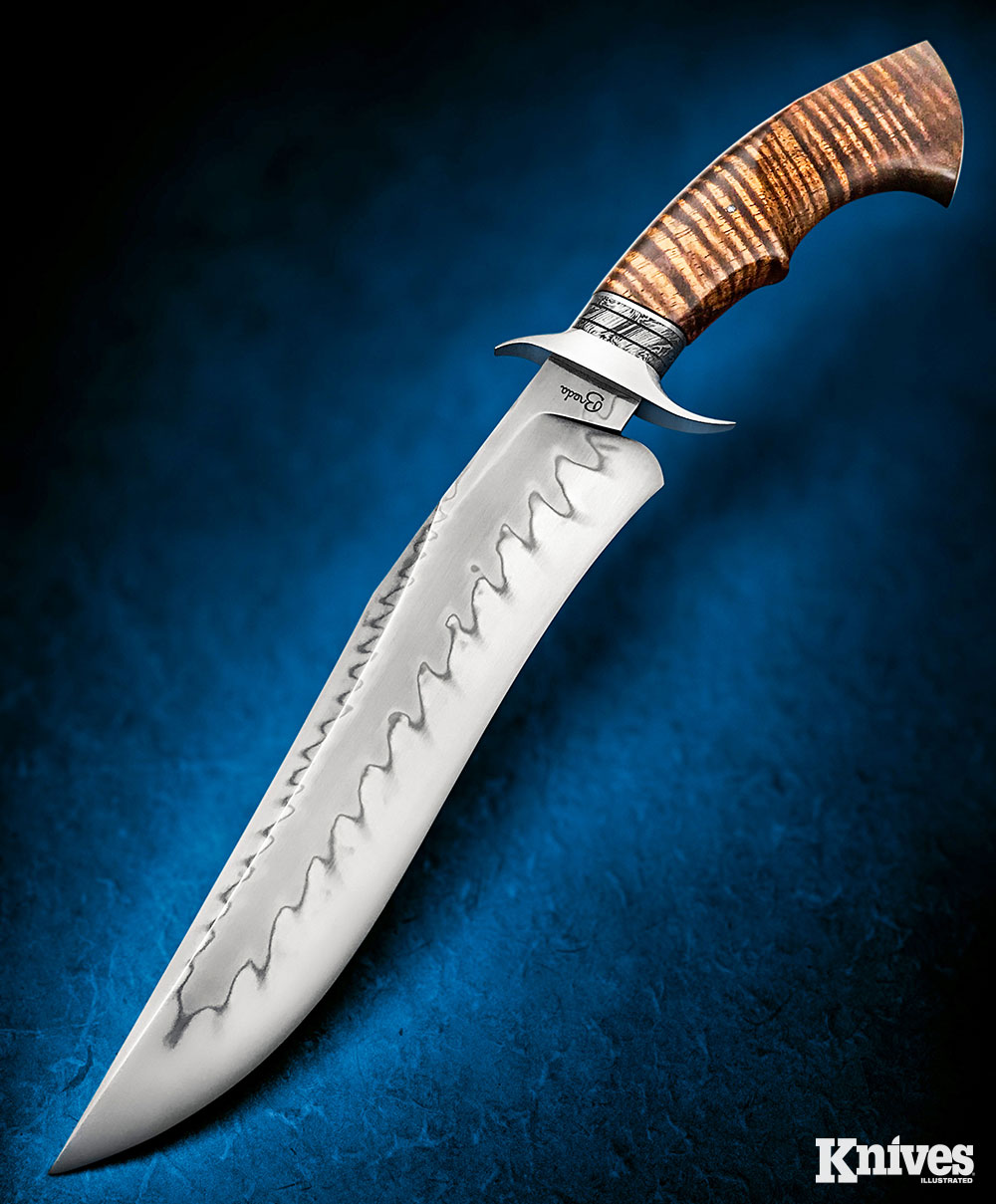 “The late Master Smith John White was a big influence on my work,” he said.  “His combinations of materials really made an impression.”

Ben’s work is known for his precise fit and finish, bold hamons, and skillful use of curve and contour.

I’m the author of this article, and I have roots in Texas back to the 1850s. I took a wandering path through the knifemaking journey, joining both the Knifemakers’ Guild and the ABS, making stainless folders and forged fixed blades, with plenty of variety in between.

“While the Bowie knife may not be as well-used and frequently carried in society today as it was in the 1850s, the modern Bowie retains a place of honor in the knife world.” 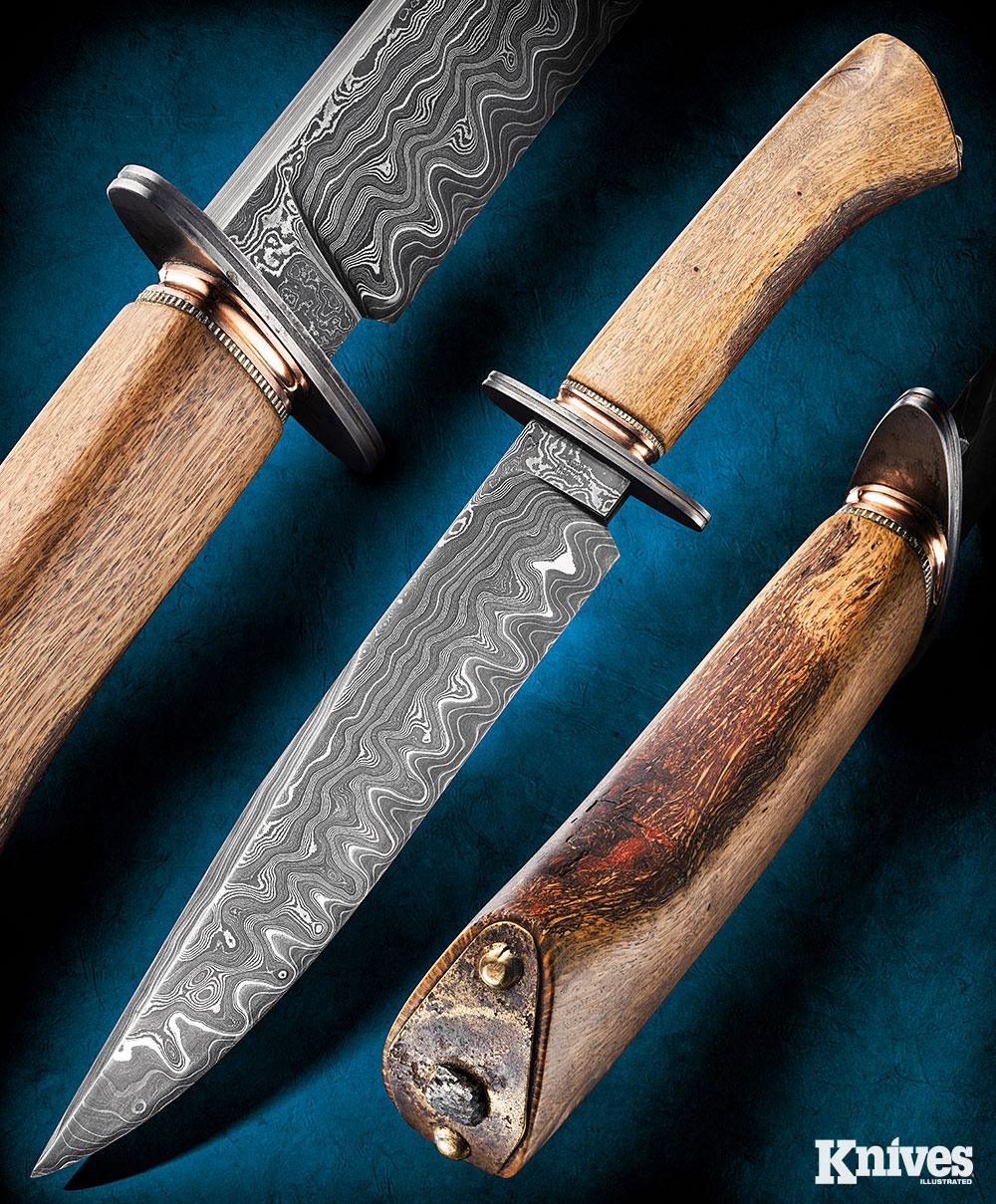 Jason Fry’s Bowie features 1836-layer Damascus and an 1836 half dollar, to commemorate the year of Texas’ independence. The Damascus and the guard contain nails from the Mexican meeting house after the Battle of San Jacinto, and the spacer and butt cap are relics from the “Sea of Mud” camp during the Mexican retreat. The handle wood is live oak from the “Sam Houston Runaway Scrape Oak” where Sam and the Texian army camped on the first night of the Runaway Scrape after the fall of the Alamo. Caleb Royer photo

While I’ve been making Bowies throughout my career, I’ve really gravitated in the last few years toward the bigger forged knives. Jerry Fisk and Doug Ritter pitched me a project to make a knife in 2017 for Greg Abbott, the governor of Texas.

Beginning with the Bowie knife I made for the governor, I began to pursue the use of historical material in my work. I love to make a knife that includes a good story. I credit Jerry for sending me down the historical materials rabbit hole, and I look to his work for inspiration. 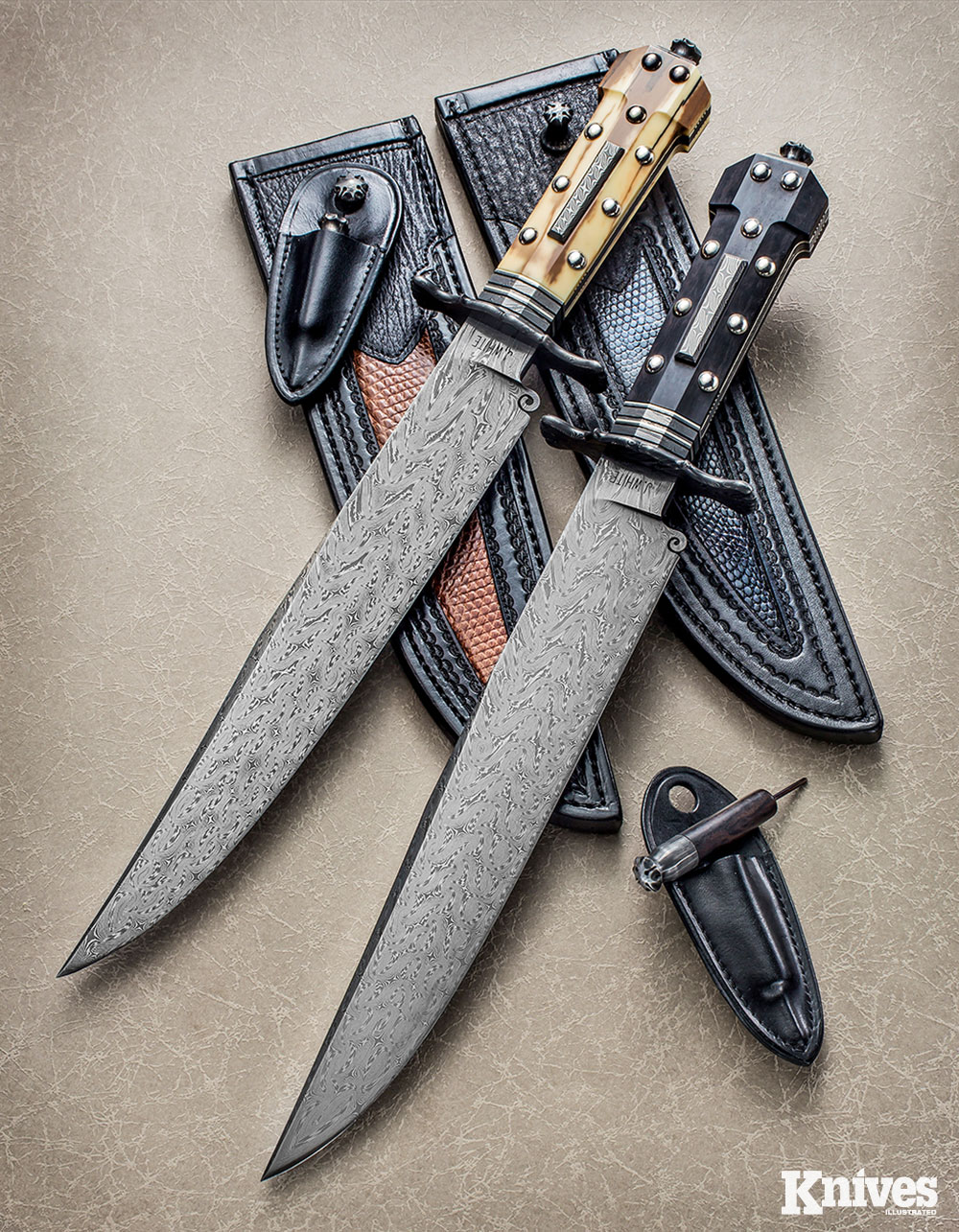 The late John White was known for his Bowies in the “dogbone” pattern, so called because of the shape of the handle. SharpByCoop photo.

While the Bowie knife may not be as well-used and frequently carried in society today as it was in the 1850s, the modern Bowie retains a place of honor in the knife world.  Handmade and custom Bowies bring a modern interpretation and artistic flair to the classic designs.

The Bowie knife will continue to evolve, but it’s not going away any time soon. While most of us are not likely to find ourselves in a knife-wielding duel on a sandbar, many modern adventurers find a Bowie useful for camp chores, outdoor cooking tasks, and as a status symbol.

“The Bowie knife will continue to evolve, but it’s not going away any time soon.” 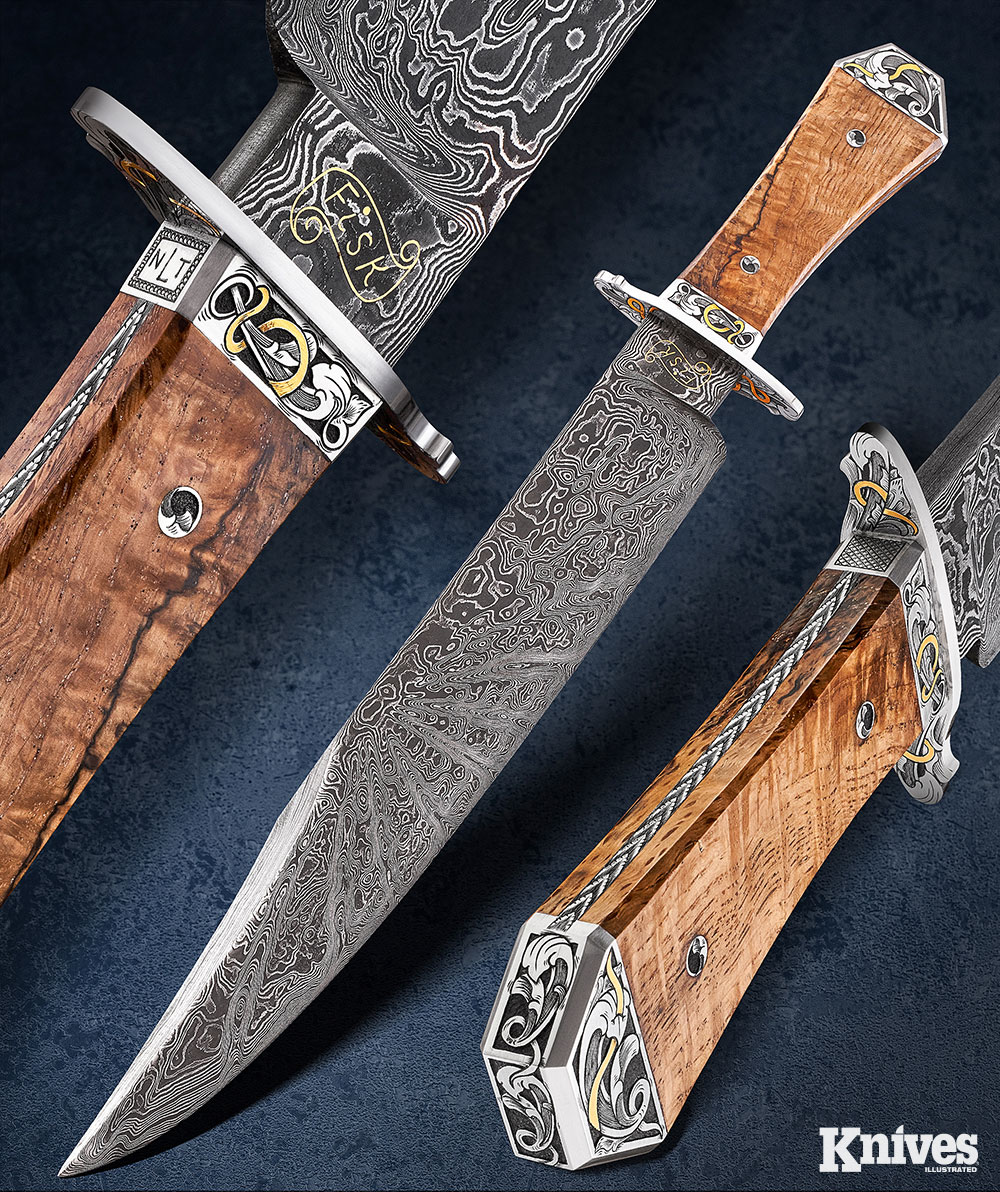 Master Bladesmith Jerry Fisk is well known for his use of exotic and rare historical material in his classic Bowies. This knife is the first modern knife forged on the site of James Black’s original forge, presumably where the original Bowie knife was forged. Whetstone Studio photo.

Still others have moved beyond the Bowie knife as a tool, collecting examples of fine handmade knives simply for artistic or aesthetic purposes. Regardless of the variety of motivations, many of us find ourselves in the same place as our ancestors: We want a knife “like Jim Bowie’s.”