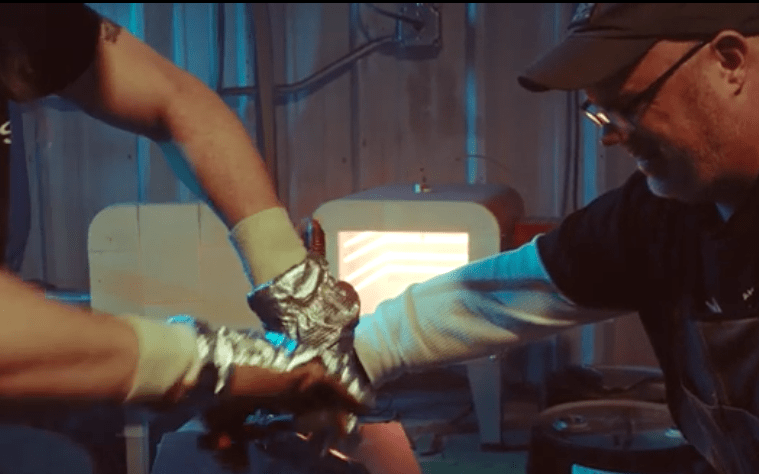 Knives were “were one of man’s first tools,” he adds. That resonates with a lot of people. It hits somewhere in there.”

Evolution of a Maker

Just as human beings’ first crude, stone tools have evolved over thousands of years, so too has Abernathy evolved as a maker.

Abernathy launched the first iteration of Sniper Bladeworks in 2009, and is father helped to fund the fledgling custom, tactical knife company. In 2013, Sniper won the prestigious Blade Show Tactical Folder Award for its LPC. Sniper Bladeworks’ MAMU appeared in Discovery Channel’s Man, Woman, Wild. And Sniper’s DMF scored the cover of Blade Magazine. Abernathy’s dad lived to see the magazine cover and other accolades, and that’s something Abernathy wouldn’t trade for the world.

But in 2017, around the time of his dad’s passing, Abernathy decided to “throttle down” Sniper for a bit. “We needed some time to rethink our approach and mission,” Abernathy explains.

Tomorrow, Tuesday September 15 at 10:00 AM CST, Abernathy and Sniper take a leap forward in their evolution. That’s when the “2020 RELOAD” campaign launches on Kickstarter. Anyone who purchases from the Sniper Bladeworks collection (LPC, DMF, Dashi, MAMU or Smachet) on Day One will score a 10 percent discount.

Every Blade Is an Evolution

Being a knife maker is itself an exercise in evolution. “You know, I don’t know if anybody’s ever made the perfect knife,” Abernathy muses. “There’s always something else you could do to it to try to tweak it. And I think my craft is still evolving.”

Don’t miss this knife making video. Watch Abernathy at his forge and learn the philosophy behind his craft.

Any footage of a skilled maker working at his craft is engrossing, but Abernathy’s thoughts and wry sense of humor are exactly what I need right now. Some select quick takes:

“I’m not terribly mechanical. I’ve never had a shop class. I’m not that bright,” Abernathy jokes.

“There is a fantastic feeling of satisfaction when you actually handcraft something. [You take] a pile of things that are all rectangular.You take that, form it, shape it, profile it, cut it out on the bandsaw. And then, at the end of the day, you have a handmade custom knife built out of that … which is fantastic.”

“I think the SWAT team has helped influence my knife making, just being a deputy sherriff, and a cop, and a detective is that it allows me to use knives in a tactical setting. It helps me to design knives to fit the situation.”

“I like all the stuff to have a little bit of pistol grip to it, because I think it gets the tip of the blade pointing downrange without having to cant your wrist way over.

“We’ve got this little hump here that takes up that gap in your hand. It just melts into your hand.  We like a little bit of the belly.

On Blade Evolution in the Future

“These knives will be around long after I’m gone. Young collectors will be geeking out at knife shows and they’ll say, ‘Yeah, a bunch of fat SWAT guys used to make them in their garage, and they’re pretty neat,'” Abernathy chuckles. Spoiler alert: We think they’re pretty neat now.