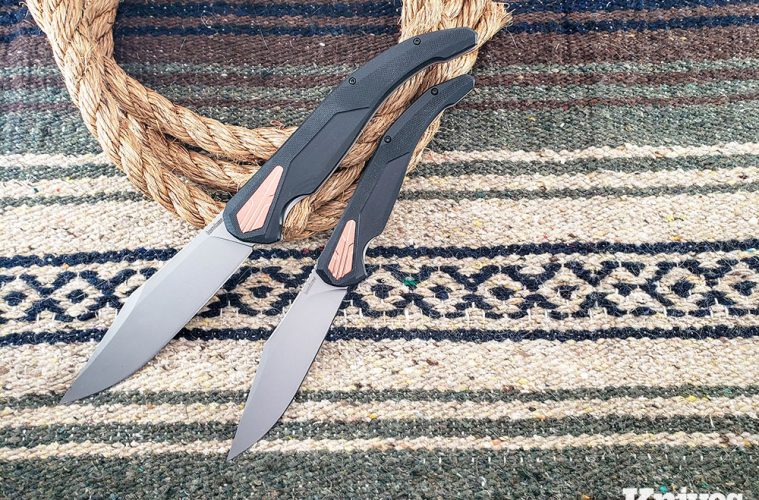 THE KERSHAW STRATA: A 21ST CENTURY KNIFE FROM A 16TH CENTURY DESIGN

Traditional designs hang around for a reason. Sure, there may be some nostalgia and sense of history, but for them to continue in everyday use, there also has to be a degree of practical form and function. That’s not to say that they can’t be updated with the times, though.

“The Strata series consists of two models, both of which could fill either the fighter or the utility role.” 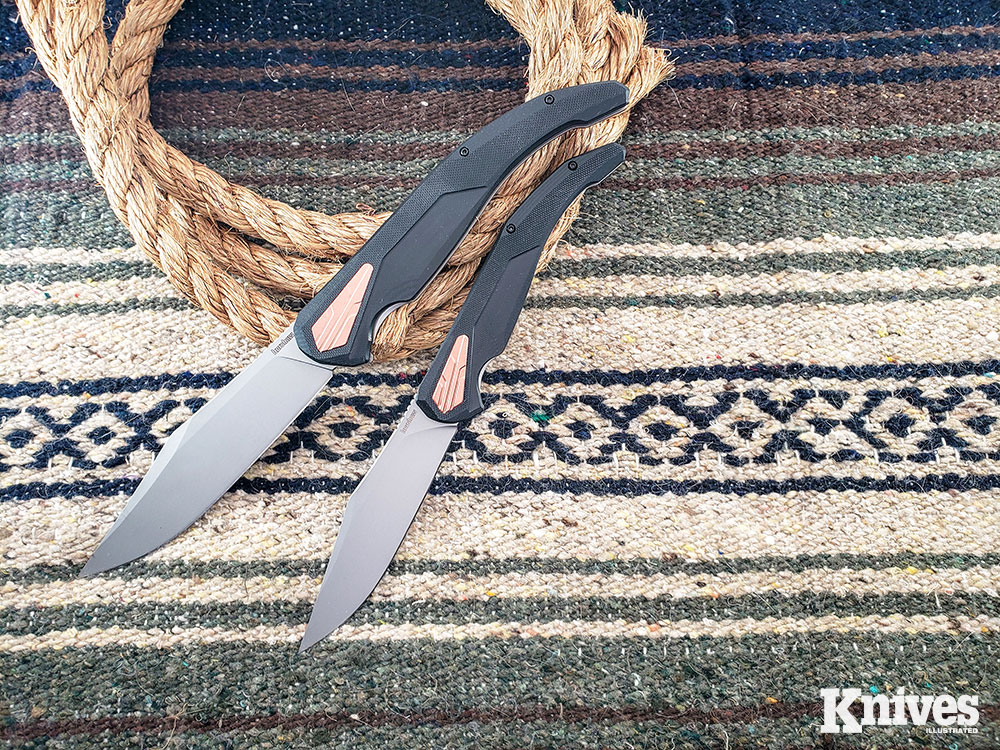 Take a look at Buck’s classic 110 folder. It’s been an American mainstay since the mid 1960s, but Buck continues to evolve it with modern materials and it’s still a popular user today. Well, Kershaw also looked to a traditional design for its new Strata and Strata XL, but the company went back a little further than the 1960s. The Strata is a modern evolution of the Spanish Navaja, which dates back to the late 1600s.

Kershaw took the 1600’s design and pulled it into the 21st century with an update in materials, engineering, and styling, while still keeping true to the lines and function of the originals. The Strata series consists of two models, both of which could fill either the fighter or the utility role. 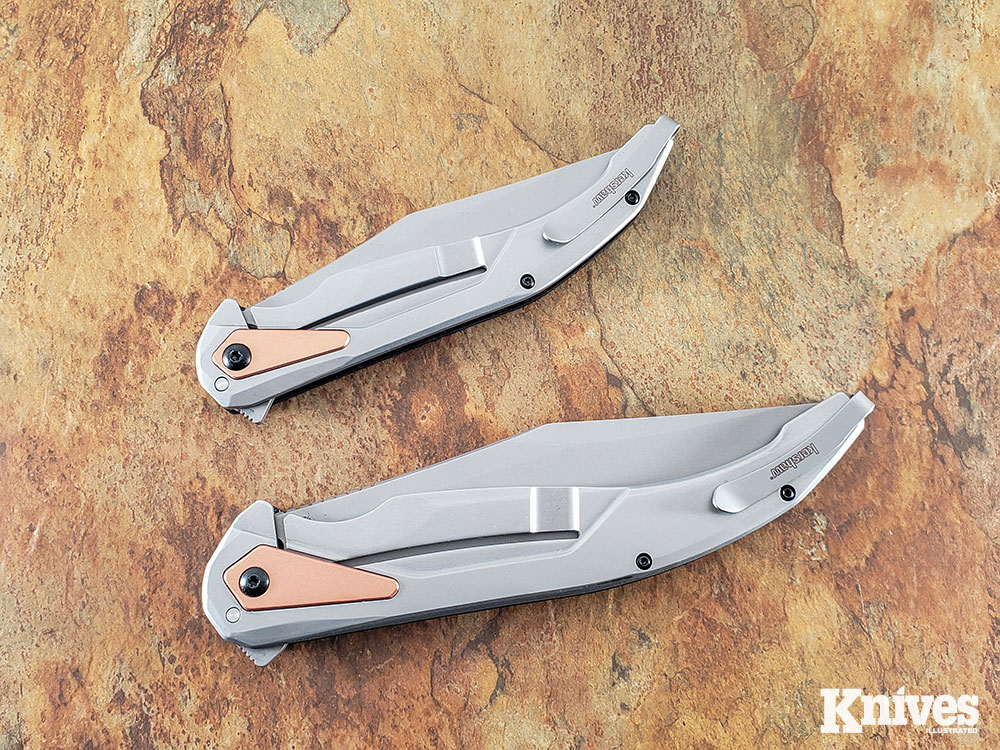 The Kershaw Strata and Strata XL imbue the spirit of the Spanish Navaja fighting knife and reincarnate it as a modern 21st century folder. 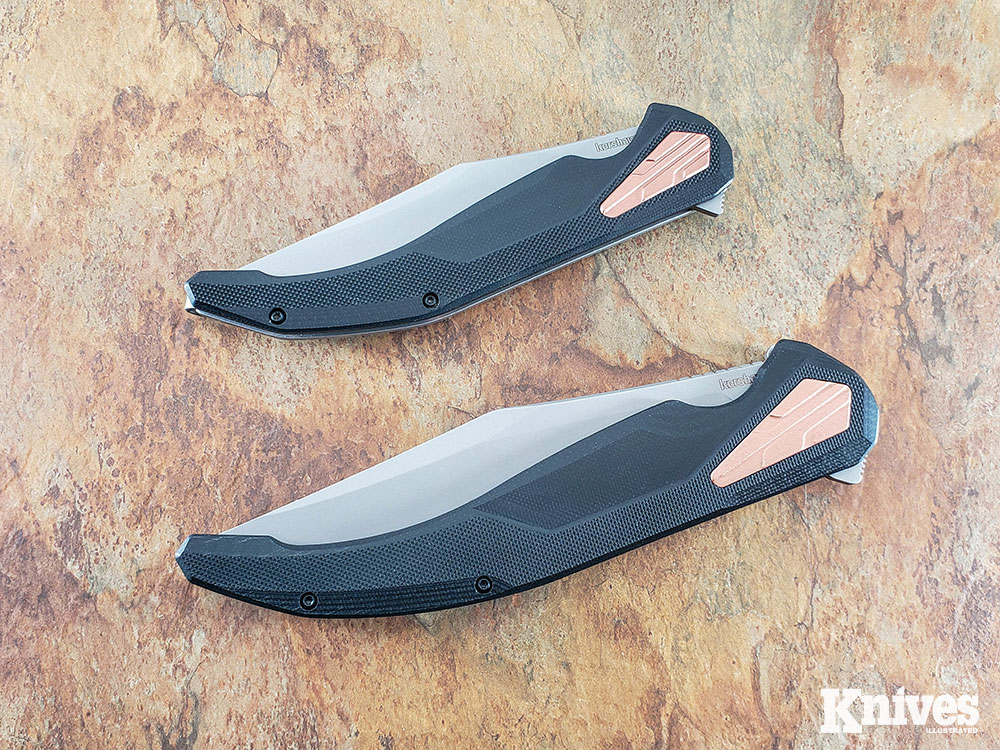 The Stratas have one handle slab of black G10 (top) that’s contoured and textured for a secure grip. The Strata’s other scale (bottom) is made from stainless steel with an incorporated frame lock.

Each Strata model features a clip-point blade of D2 tool steel with a high, flat grind and a matte finish. The blade rides on a KVT ball bearing system and opens by means of a spine mounted flipper. 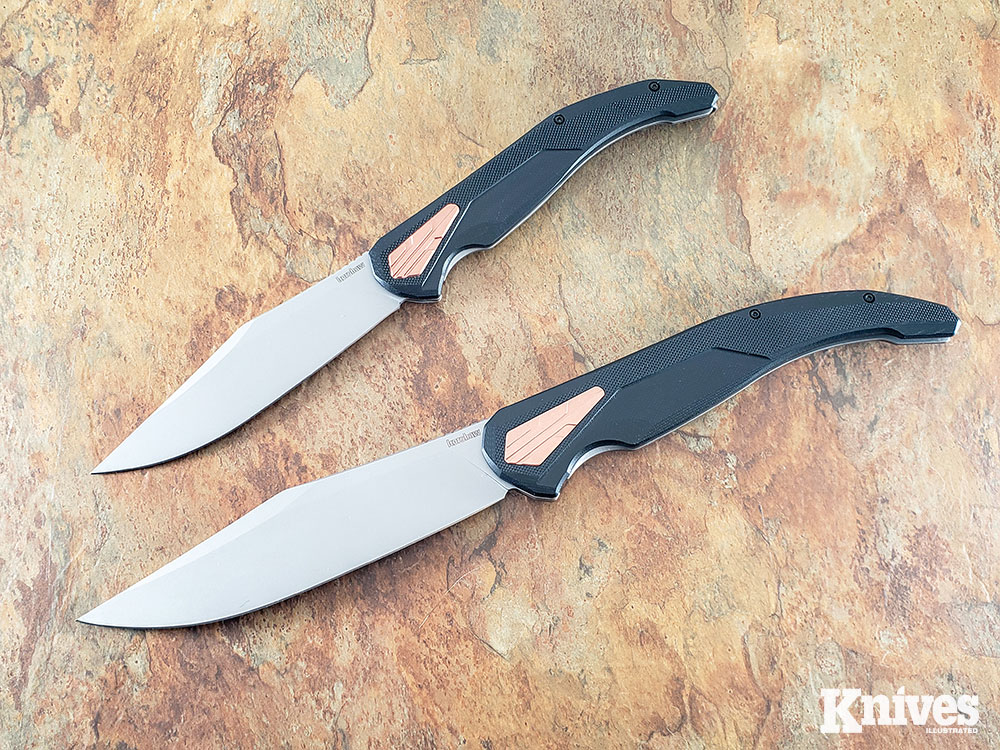 While built from thoroughly modern materials, Kershaw’s Stratas reflect the blade and handle lines of a traditional Navaja. The Stratas both sport a clip point blade made from D2 tool steel and having a high, flat grind. 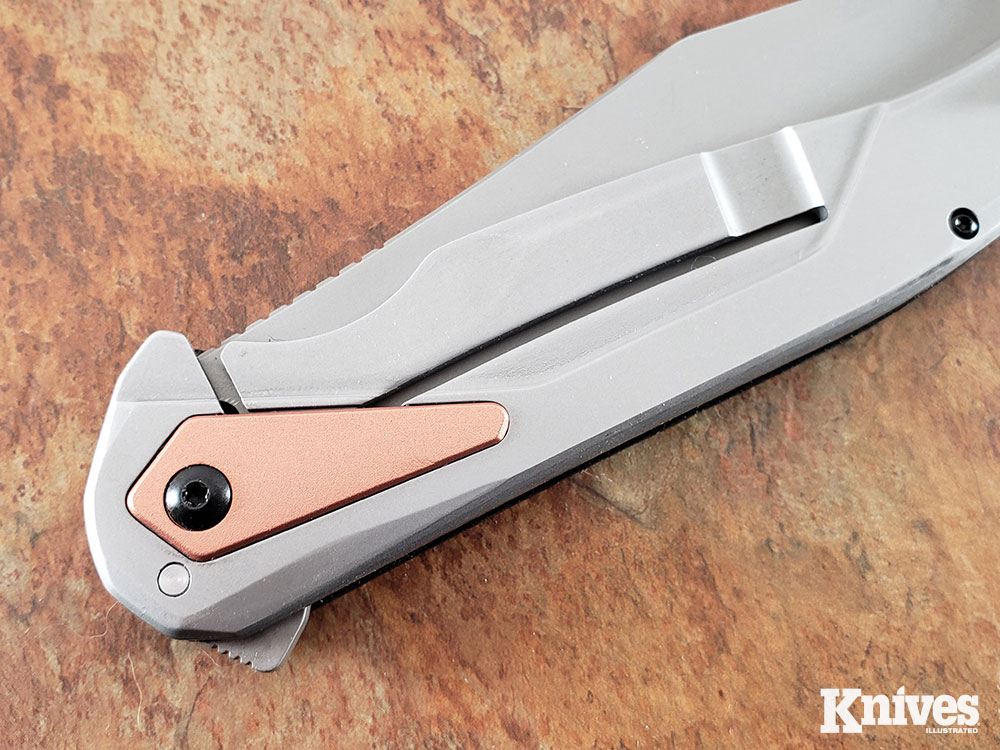 The Strata has a copper pivot cap as well as copper anodized spacers that add a subtle, classy look to the knives.

The Strata’s frame is of stainless steel, and it uses a frame lock to secure the blade in the open position. The frame also has a discreet matte finish on the steel lock side and is mated to a black G10 scale on the other side. Copper accents and spacers add a pop of color and adornment similar to some of the flashier Navajas of old.

The G10 scale is sculpted and textured to ensure a positive grip, and the handle shape follows the horn or crescent shape of a traditional Navaja. A deep carry pocket clip is affixed to the tapered pommel and is set up for tip-up, right-hand carry. 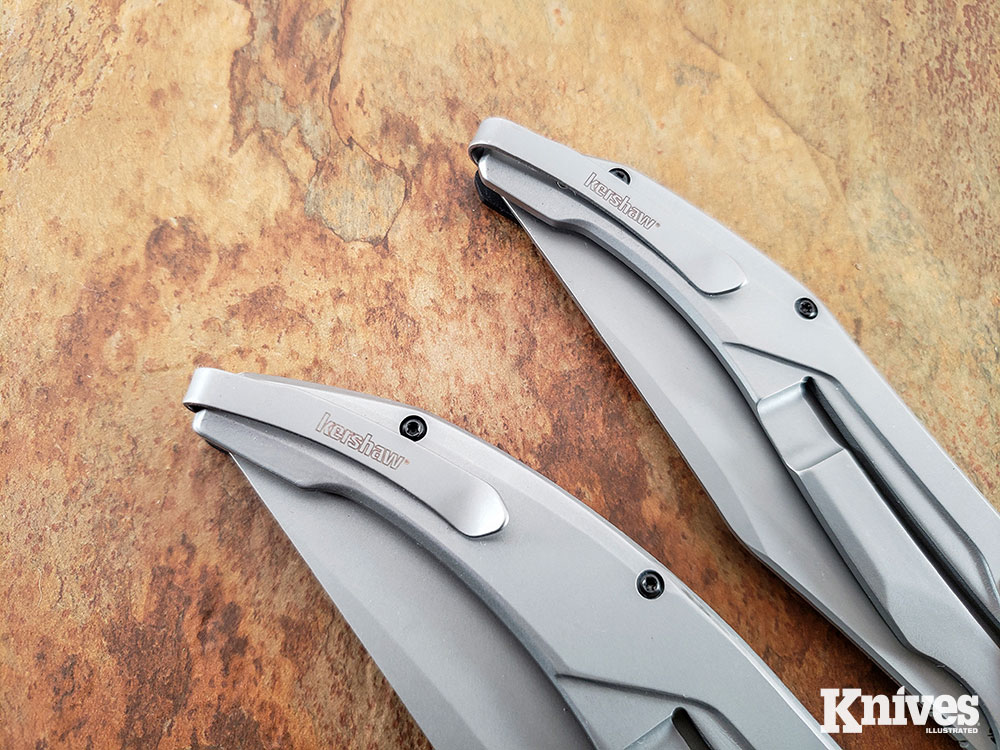 Both Stratas use the same deep carry, low profile pocket clip. The well-designed clip slips onto the pocket lip easily but still provides good retention for the knife. A 1-inch section of jumping on the spine of the blade gives the user a secure place to rest their thumb.

The difference between the two models is blade and overall size. The Strata has a 4.5-inch blade and a 5.4-inch handle for an overall length of 9.9 inches. Its weight is only 3.7 ounces despite the respectable size of the knife.

The Stratas have a distinctive look to them, thanks to the Navaja lines that sets them apart from most currently produced folders. They’re sleek and elegant, but those clean lines conceal a formidable folder. The Strata (left) and Strata XL (right) are both hand filling knives capable of serious utility or defense work. Both knives feature handles plenty long enough for even large hands.

Both Stratas are fast to deploy thanks to the flipper and KVT ball bearing system. Kershaw has a lot of experience with this type of opening system, so it’s no surprise that it got it right on these, even with the big 5.4-inch blade on the XL.

“…in the pocket even the large Strata XL is indiscernible from a 3-inch or so EDC knife.” 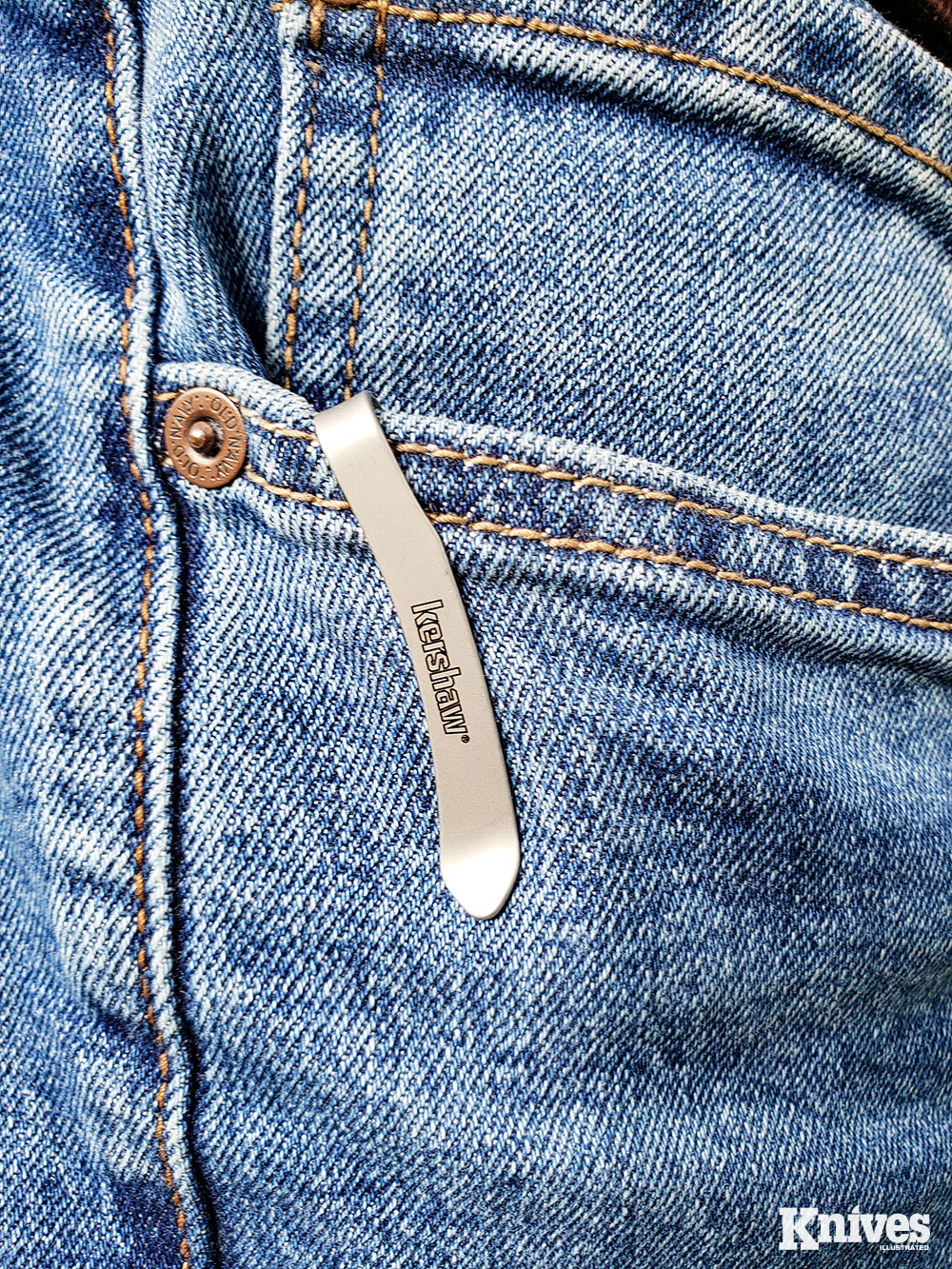 The big Strata XL disappears in the pocket thanks to the discreet carry clip. Just by looking at that, an observer can’t tell if you’re carrying a 3-inch folder or the 5.4-inch beast of the XL.

While the clip may be set up for right-hand carry, the opening system works just as well with either hand. If you don’t want to startle someone by flipping the blade open, its easy to grasp the flats of the blade between your thumb and index finger and open it manually as well. There’s no need for a nail nick or thumb studs. Kershaw has lots of experience with flippers, and that’s the system used to open the Stratas.

The curved handle with its textured G10 scale is comfortable in the hand. You’ll notice that despite the size of these knives, the handle is rather thin at only about 3/8-inch wide. Sometimes thin handles can be uncomfortable, but I didn’t find that to be the case on the Strata. 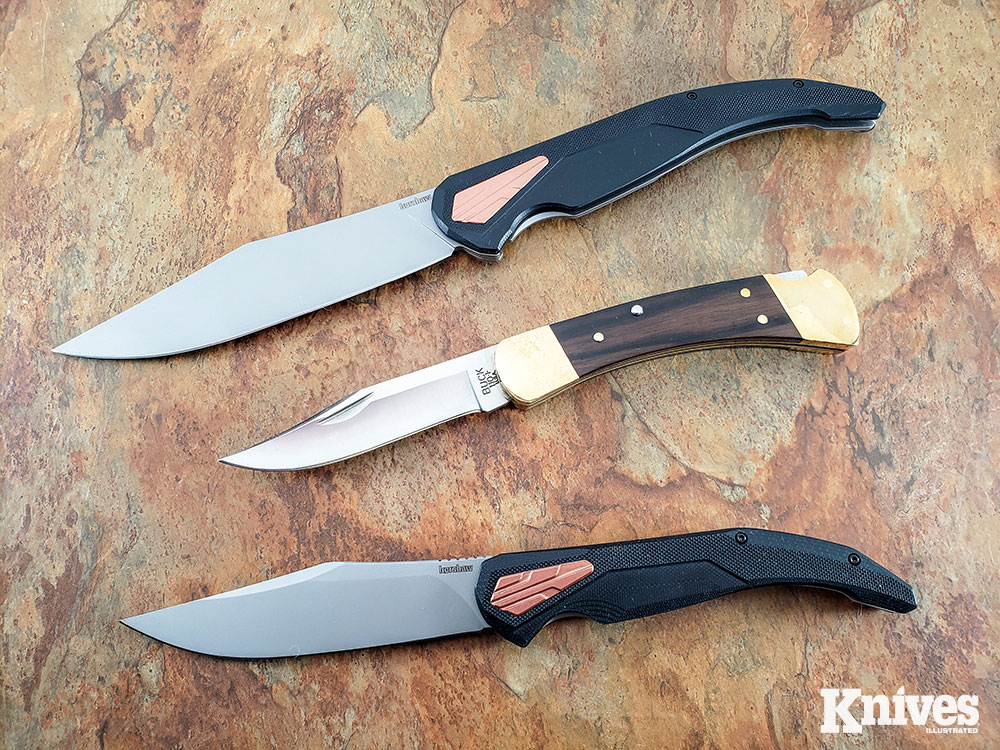 The Strata XL (top) and Strata (bottom) compared to a Buck 110 (middle) to give an idea of how substantial these blades are.

The other advantage of the thinner handle is that it makes the knife carry flat and discreetly in the pocket. Couple that with the low profile carry clip and most people aren’t going to realize you’re carrying a such a large blade.

In fact, in the pocket even the large Strata XL is indiscernible from a 3-inch or so EDC knife. Its only when you draw the beast from your pocket and flip it open that people will realize what you’ve been packing all along. Underneath the pivot cap is a KVT bearing system that ensures the Strata’s blade opens smoothly and swiftly.

At one point I was carrying the Strata XL in the pocket of my work trousers and I literally forgot I was carrying. No one at work commented on it as folders are common on my job, and you couldn’t tell how big it was from the only thing showing, the clip.

I had intended to show it to a coworker who likes big blades but, as mentioned, I literally forgot I had it with me that day. The less than 6-ounce weight and flat profile help a lot to balance out the big 6.6-inch size closed. 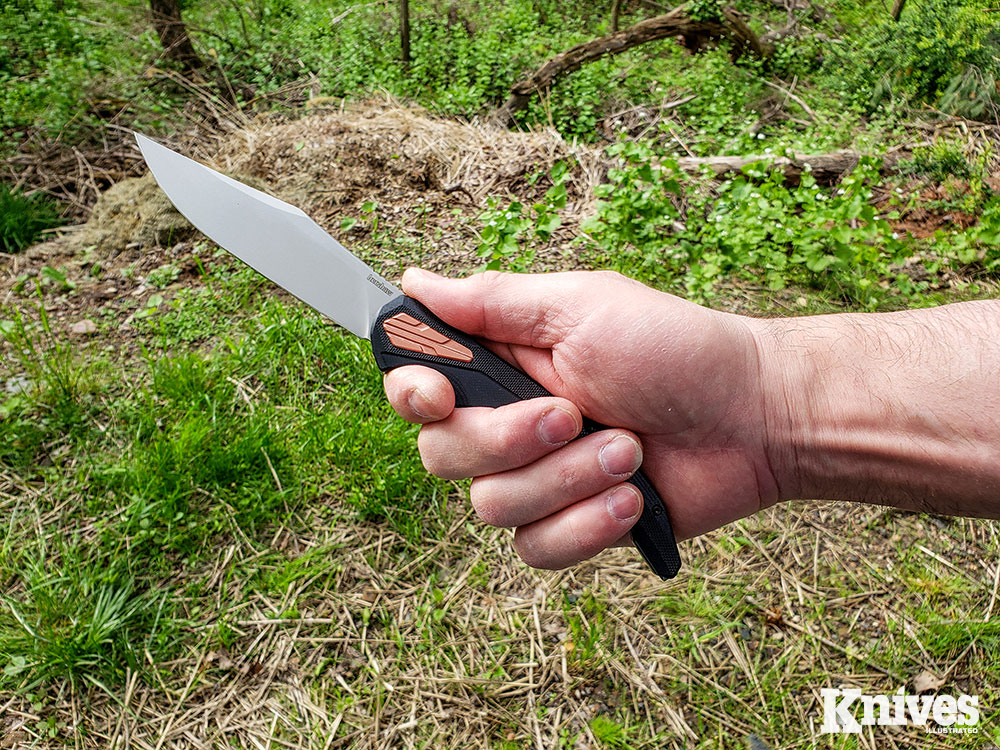 The Strata works well in a traditional saber grip.

In general use, the Strata handles nicely. The high flat grind leads to a fairly thin blade profile, and the knives are great slicers. Factory edge was very good and would pop hair out of the box.

They were obviously great at common utility tasks like cutting cordage, opening boxes, cutting tape, and things like that. They also did decent on some casual wood carving and make handy picnic knives. 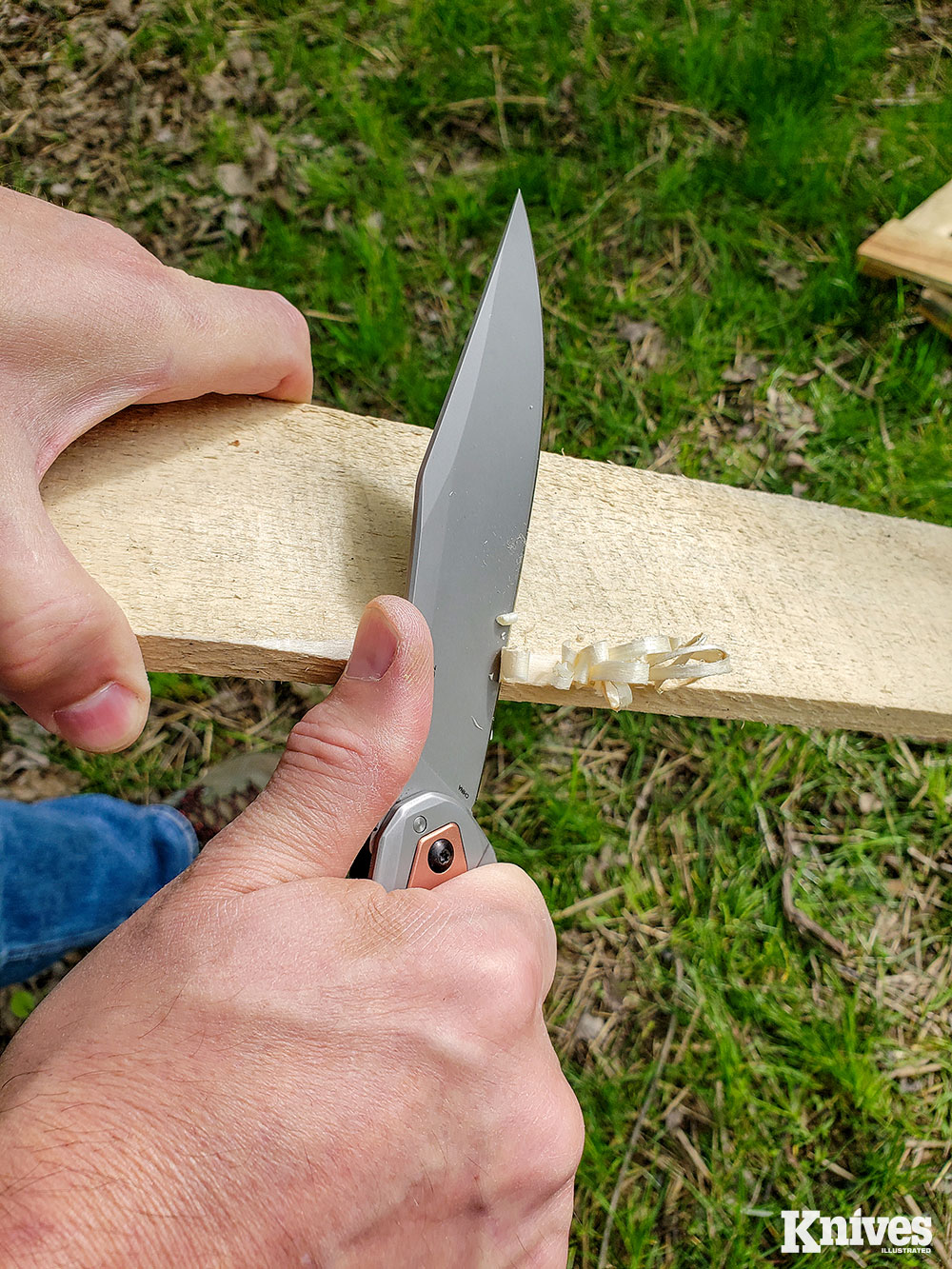 The high, flat grind and keen edge of the Strata’s D2 blade make it a keen carver and slicer.

First off, they’re fast to deploy and nimble in the hand. They seem to work equally well in a classic saber grip or a reverse edge out grip. Even the smaller Strata is big enough to act as an impromptu kubaton or impact device when folded and grasped in a closed fist.

The clip-point blade has a decent belly to it and did well slashing cardboard test targets. It also slashed through heavy denim fabric that I covered the target with. The long clip point with its unsharpened swedge makes for a fine point and did a good job at thrusting.

The finger groove in the handle, along with the textured G10 grip slab, helped keep your hand in place during stabs. Even closed, either Strata is long enough that the pommel protrudes from your grip and can be used for kubaton techniques if you know them or for simple hammer blows.

So, if you’ve gotten this far and are thinking you may need a Strata in your life, the question is regular or supersized? Even the basic Strata still packs a 4.5-inch blade, so it isn’t a small folder. It’s a great EDC knife that carries flat and smaller than it really is but offers plenty of functionality for EDC tasks while still being as big as or bigger than most tactical folders.

If you’re looking for a dedicated fighter, though, or just like the novelty of a massive folder that’s still easily packable, then the Strata XL is really the way to go. Considering there’s only about a $20 price difference between the two, it really just comes to what you want. I think you’ll be well served with whichever one you choose.

THE NAVAJA: AN INTERESTING HISTORY

As mentioned, the Spanish Navaja design goes back to the late 1600s. The initial knives were non-locking peasants’ knives used for basic utility purposes. As steel technology improved, a backspring was added and eventually, in the 18th century, a clever ratcheting lock system.

The ratchet system produced a distinctive clack-clack sound as the blade was opened, which had a similar psychological effect as racking a pump shotgun.

If you were a citizen walking home at night and heard that sound behind you, you knew you were in trouble. The Navaja had a reputation as a blade used by ruffians and criminals, but in fact it was used by all classes in Spanish society.

Examples can be found with rather plain finishes all the way up to intricately engraved models inlaid with precious metals. The Kershaw’s lineage is obvious when you look at it compared to a traditional ratcheting lock Navaja (top) and a simple non-locking peasant version (bottom).

The blade of the Navaja was typically a deep bellied affair with a long, needle-sharp point and pronounced clip. It was well suited for both vicious slashes and piercing stabs. This was paired with a long curved, horn shaped handle with a pronounced curve towards the end.

Handles could be of wood or bone and often had steel liners for strength. Some models had bolsters and pommels of brass or other materials as well. Larger Navajas were often carried tucked into a sash of belt and the curved pommel provided a convenient way to quickly draw them when they were needed.

The Navaja’s blade and use as a fighting knife was thought to be a major influence for the American Bowie knife that would come later.

While smaller Navajas were used as utility knives, larger models with blades more than 4 inches and sometimes up to 8 or even 12 inches were used primarily as fighting knives. Spain was known for its martial blade traditions and world-renowned fencing schools.

Eventually the same became true of schools that taught fighting with the Navaja, including a method that used subterfuge and deception by pairing the Navaja with a cloak or jacket wrapped around the fighter’s other arm, which could be used for distraction, blocks, and cover.

These martial skills were exported, along with the knives, to other Spanish speaking countries as well, particularly Argentina and the Philippines.

While the Navaja’s use declined as firearms evolved, the design has never gone away, and Navajas can still be readily found in Spain in the rural areas as the utility knives that their ancestors carried.

They’re also available in shops and markets for tourist consumption as the romance and the history of the design continues to draw blade aficionados to the style today.