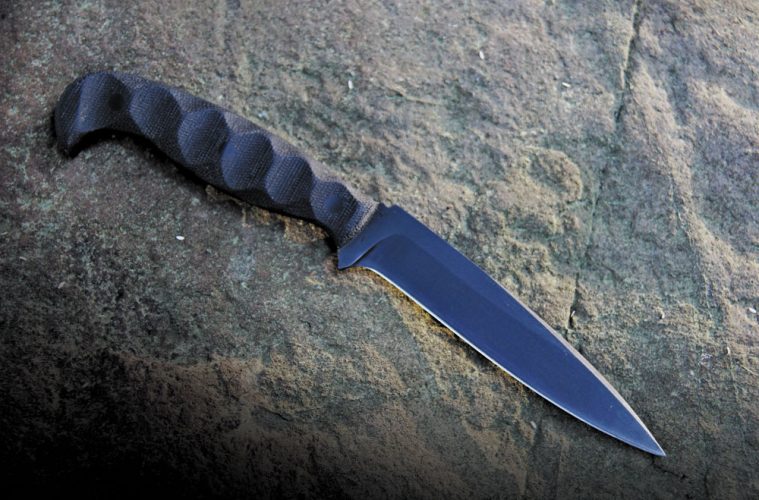 REVIEW: The Wenger Blades Vardr is Protection You Can Count On

To cut to the chase: The Wenger Blades Vardr is a serious knife meant to guard your life, and the name is fitting. It pairs perfectly with a concealed carry firearm, flashlight, tourniquet and plenty of training. Polymer trainers will eventually be available for it, completing the package. Like all of Dave Wenger’s blades, the user is receiving a lot of value for the money. Here’s why we think so:

Let’s Take a Few Steps Back

Like many cutting tools throughout history, the weapons of the battlefield are influenced by the tools of peacetime. The karambit was originally an agriculture tool in Indonesia, and tomahawks were used in the woodlands of the United States when they not employed as tools of war. It makes sense then that Dave Wenger’s work, popular with woodsmen, hunters, and campers, became popular with armed professionals doing work in harm’s way.

Dave Wenger makes some pretty incredible tomahawks and he has jumped from a small-time operation to overnight success, with many companies and survival training programs adopting his work for their lineup. Wenger is a Journeyman Knifesmith and his knives feature finely ground strong edges that slice and hold up to hard use. 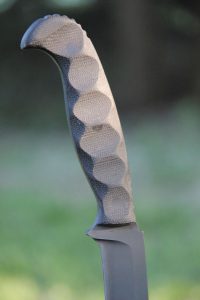 The Vardr features deep scalloping on the handle for a secure grip.

The new Vardr is a purpose-built knife. Meant as a close-range tool, you can use the Vardr as an offensive layer worn on the waistband of a warbelt, on a plate carrier, or concealed inside the waistband of an everyday carry belt where it falls under the legal length. “Vardr” is Norse for guardian and you can certainly use this knife as the protection you need in the most dire of circumstances. If you have to trust your life to a knife, buy the best you can afford and train with it.

You can wear the Vardr at any point on your body, but it excels when worn close to the appendix on either side of the centerline. In recent years, many firearm instructors have incorporated a fixed blade into their training, and often carry it on the opposite side of the pistol with the edge facing forward. This method of carry works with the hook design of the handle grip that facilitates a quick reverse or forward grip. Wenger wanted to create a blade effective in either hand while working reloads, addressing malfunctions, or when addressing a threat with a blade makes more sense than with a firearm.

The rear of the handle features a hook similar to those found on ice axes, which prevents slipping off while drawing the Vardr.

The shape of the blade gives insight into its intended purpose and it tells a story of the type of defensive/offensive tactics optimal for its design. The narrow profile of the blade, not reaching 1 inch wide until the plunge line, is meant for easy penetration with thrusting motions, and the tapered tang puts the balance point in the center of the hand, instead of being too blade- or pommel-heavy. Wenger designed the blade light in the hand but secure in the grip.

“The Wenger Blades Vardr is a serious knife meant to guard your life, and the name is fitting.”

Dave Wenger made the Vardr blade 5.25 inches long. You can easily conceal this length when you tuck it at an angle on the waistline or behind magazines on a plate carrier. You can trace this decision to human anatomy and the needed depth of thrusts. Timeless dagger designs throughout military history in the U.S. and British armed forces inspired Wenger. The Vardr isn’t a small knife, but it’s also not too impractically large. It simply feels good in the hand. 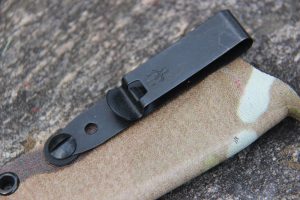 Made from 80crV2, a high-carbon steel, with a saber grind, the Vardr is one tough blade. Each Vardr is finished with the deep Caswell finish Wenger Blades is known for. This matte grayish/black finish reflects very little light and takes on a grayish brown when used. I have multiple blades by Wenger with this finish and even the most-used have held up well over time. Dave Wenger incorporated deep scallops in the handle design. This texture helps the user achieve a strong master grip on the blade. Wenger gave a contour to this knife and it further reinforces the idea that it is not meant for extended cutting chores, but quick work, when a secure grip at the expense of some comfort is a fair trade-off.

The sheath provided to us was a folded, single piece of MultiCam Kydex riveted together with a Discreet Carry Concepts High Level Retention Clip. This sheath is worn inside the waistband and the clip is worn with or without a belt. We found the clip, lacking a secondary attachment point other than the single Chicago screw, rotated on occasion when drawing the blade from concealment. A heavy-duty section of bicycle inner tube wrapped around the sheath body and inside of the clip fixed this. We imagine good old duct tape would work, as well. The only critique we have is that the sweat guard should be higher on the back of the sheath than the front. This will aid in “blind” resheathing, prevent incorrect resheathing, and also keep body sweat from dripping down onto the blade.

Many knife “tests” lack any reason or purpose. I wanted to use the Vardr in a manner that provided essential data for this review. Since Wenger designed this knife to perform in the hands of an armed professional, I knew this meant accessing it from various methods of carry. I also knew tests for bushcraft and survival knives are inappropriate, since Wenger did not design this knife to cut wood. This meant we should do the cutting tests on fleshy mediums. 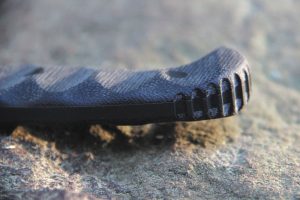 Wenger placed jimping on the back of the handle where the thumb is meant to cap the blade while reverse grip thrusting.

We used the Vardr with gloves on and found the textured grip and leather palms of our gloves to be quite the combination. During our evaluation, we did not worry about riding the blade at any point. We started our penetration tests on cardboard that has the same tensile strength as skin, and then worked on various cloth types, and then a pork roast covered in clothing. We struck bone multiple times and did no damage to the tip or edge. At no point did the Vardr fail to pierce where we placed the blade.

How the Wenger Blades Vardr Fared 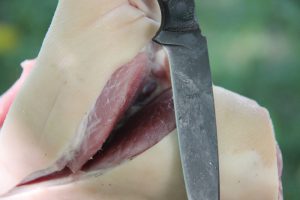 We used the Vardr on a pork roast creating deep cuts straight to the bone with slashing movements.

We used the Vardr with light and fast thrusts, as well as those with larger arm movements, generating a lot of force. Our first cut through the roast easily cut 3 inches to the bone through the skin, sinew, and muscle. We added a lanyard with a prusik loop around the handle for the heaviest of thrusts to prevent riding the blade but found we did not need to, thanks to the shaping of the handle with jimping where our thumb capped the tang. 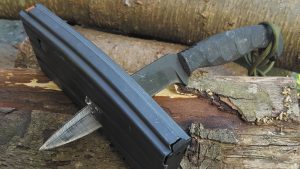 While targeting is important, there is a chance your thrust won’t be true. Rest assured, the Vardr will make it through and come out fine. We tested our sample on an old aluminum AR magazine.

Ideally, thrusts should be directed toward specific targets, but there is always the chance of accidentally hitting hard surfaces. To determine how these would impact the blade, we went a little extreme and pounded the blade through an old AR-15 magazine with a cardboard backer for support. The aluminum body did not affect the edge at all, but the metal on metal did scrape the finish some. Throughout the testing, we worked the blade aggressively and repeatedly into other materials — the aluminum magazine caused the only wear. We left the residual pig and our sweat on the knife and it had no effect on the steel’s finish.

“At no point did the Vardr fail to pierce where we placed the blade.”

Slashing is secondary to the design of the Vardr. While thrusting is more effective, there are some disciplines that still rely on defanging techniques when addressing a threat. For these, we used the Vardr on free-hanging cordage. We also slashed right through various thicker garments made from cotton and synthetics. We also cut through multiple types of cordage from paracord to braided Kevlar to an old climbing rope, and had no issues cutting through any of them. The shape of the blade is not optimal for slashing and slicing, but the results of our test were not disappointing.

The Wenger Blades Vardr is a serious knife. It pairs perfectly with a concealed carry firearm, flashlight, tourniquet and plenty of training. Polymer trainers will eventually be available for it, completing the package. Like all of Dave Wenger’s blades, the user is receiving a lot of value for the money. Given the performance of this blade, it will work as intended and could save your life. That is something you can’t put a price tag on.

Dave Wenger has earned a reputation for creating true working tomahawks for the outdoor and tactical community. You can find his work in the hands of professional survival instructors, explorers, overlanders, police and military men. Wenger’s hawks are integral in design with no chance of separation between the handle and the head.

Wenger designs all of these choppers for use, hard use, and they will outperform and outlast most others in their class. Most of his hawks have a paracord-wrapped section for emergency cordage and a bow-drill divot for fire-starting purposes. Dave Wenger skeletonizes and tapers the tangs of his tomahawks for excellent weight-forward balance.

The smallest of Wenger’s tomahawks, the Wiglaf, has been adopted by Prometheus Design Werx (PrometheusDesignWerx.com) and just as quickly as it is restocked, it sells out, literally in minutes. Despite its pocket size, the Wiglaf cuts deep and is a powerhouse. Dave has recently added The Grendel, featuring a double-bit head, to the tomahawk lineup, bringing the Nessmuk ideal to the 21st century. Dave Wenger’s designs constantly evolve, and we associate his name with true working tools that are the perfect complement to his fixed blade knives.