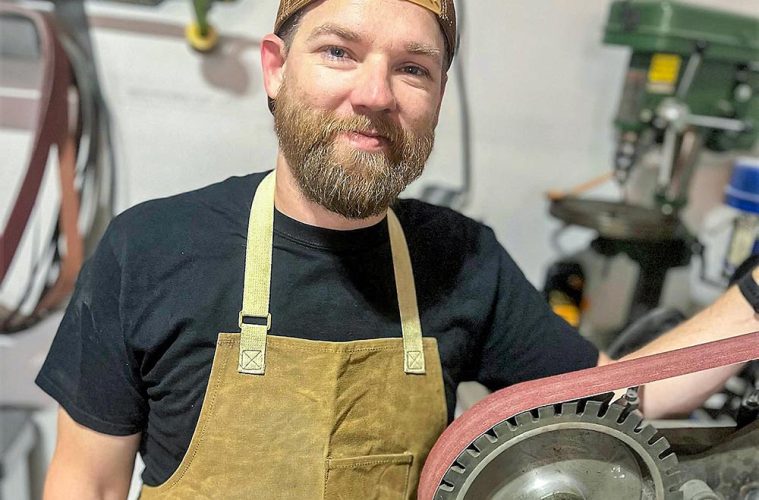 No stranger to the pages of Knives Illustrated, Jason Tietz is an EDC and outdoor enthusiast specializing in making functional, hard-use knives.

Regardless of what Tietz makes, the design process for him starts with a pencil sketch before going to the CAD system and 3D printing. Although he is known for his work with White River Knives, he wears a different hat for his custom-made gear. Tietz loves making various custom EDC items that are not only works of art but functional.

Take, for example, his titanium-made OMNI Stove. The grill top locks in place, creating a solid stove that can grill a burger or, flipped upside down, can boil your coffee in the morning.

The Omni stove can use natural tinder or solid-state fuels and looks like a spaceship. In my opinion, the URSA Pry Tool and V3 Moby are his most recognizable EDC pieces. However, he makes some spiffy knives that most people wouldn’t think were his designs as they look nothing like what he does commercially. 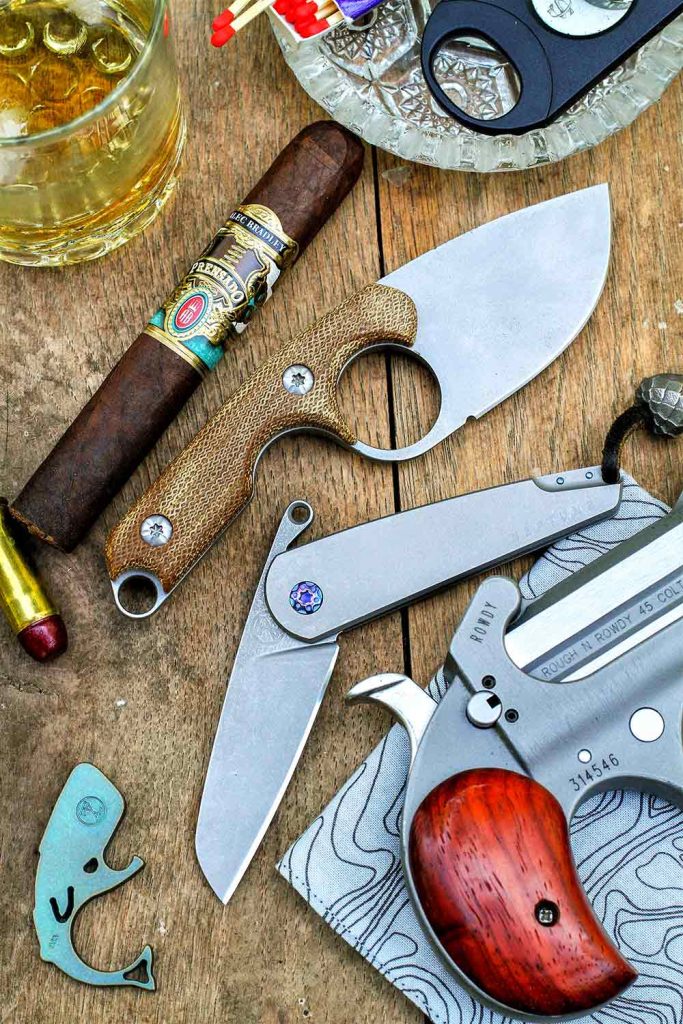 The Orion is a st out fixed blade perfect for EDC and self-defense. Micarta scales are crosscut, and the S35VN stainless steel blade features a smooth bead-blast finish.

The fixed blade of the bunch from Tietz is more of a self-defense utility tool if there ever was one. Small and easy to get at, the Orion fixed blade has a pronounced forefinger ring that is comfy and large enough for big mitts.

“Any of Jason’s EDC items are one of a kind. That’s what you get with a custom maker, truly original pieces of art and utility.”

The overall length of the Orion is 6.25 inches, with a 3-inch blade. It is stout: 3/16-inch thick and weighing 5.3 ounces. The sheath is a pocket sheath, also called a slip sheath. The Micarta scales are crosscut, and the sheath is leather. Jason used one of his favorite steels, S35VN. The blade is wide and has some light jimping on the spine. 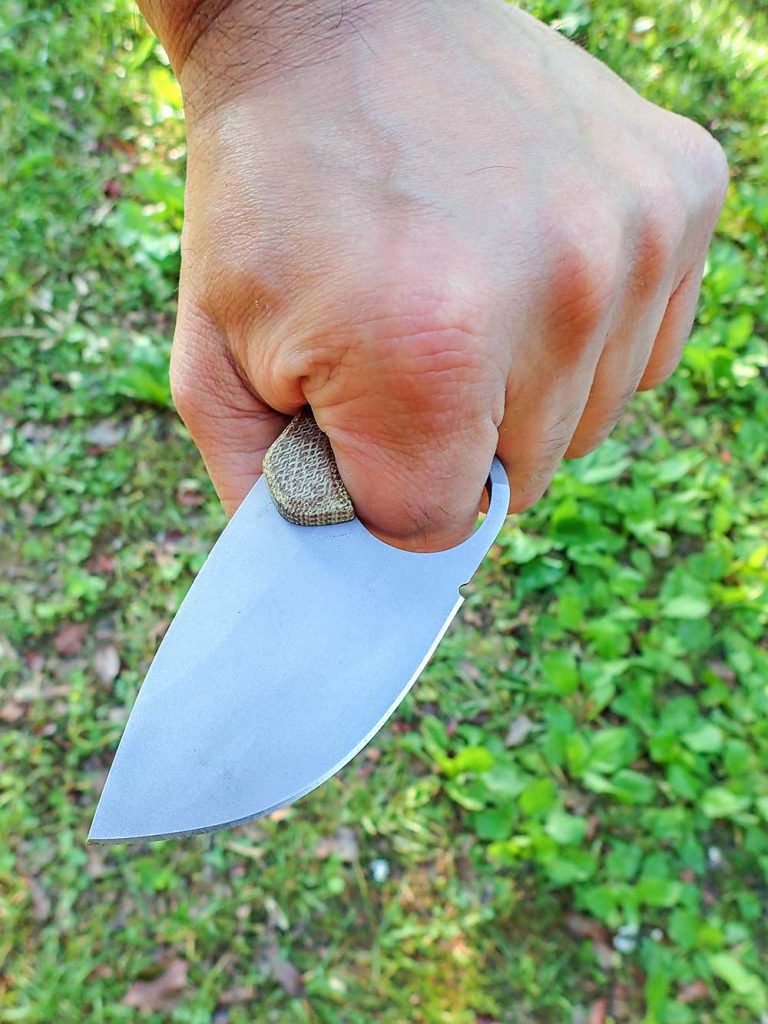 The fixed blade of the bunch is the Orion. It has a finger hold for protecting the knuckle.

The pommel has a semi-sharp point that could be used for glass breaking or attitude adjusting. There is a plain edge all the way and a subtle bead-blast finish on the Orion. This tough guy would be right at home slicing lemons for a drink or be readily available in a tight spot.

Holding the knife in a fist grip allows the index finger to rest inside the ring or the pinky finger in a reverse grip, offering a slashing position. All in the name of self-defense, of course.

According to Tietz, the Orion was created as an EDC fixed blade that can perform demanding tasks such as dressing a deer.

“A large belly to the knife and hollow grind makes it ideal for skinning tasks. It also incorporates a knuckle guard to keep your fingers protected,” he said. 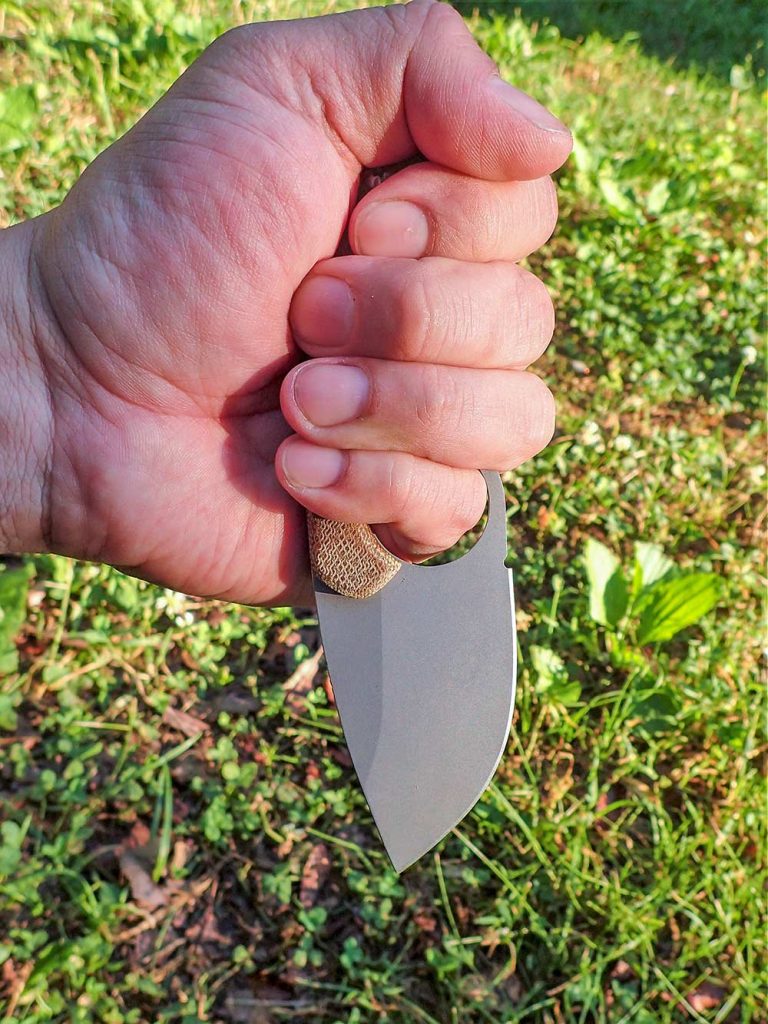 An icepick grip is one of many that can be used comfortably with the Onion fixed-blade knife.

Friction folders have made a huge comeback. Several small and semi-production knife companies have put their twist on these time-honored classics.

The Neptune is also made with an S35VN sheepsfoot blade and it’s fitted with titanium scales, hardware, and bronze washers. This is a true gentleman’s knife, emitting elegance and class. It has an overall length of 6.125 inches, with a 2.60-inch cutting edge. A light bead-blast finish is applied, similar to that on the Orion.

The closed length is 4.125 inches. A handsome leather sheath is made to fit the Neptune perfectly. It’s meant to be carried in a pants or coat pocket. The leather sheath protects the pocket, the pocket contents, and the knife.

“Small and easy to get at, the Orion fixed blade has a pronounced forefinger ring that is comfy and large enough for big mitts.”

After playing with the action for a while, posing the Neptune for photos, it was time to put it through some realistic pocketknife chores—for a gentleman. I slashed through a gauntlet of materials, increasing the tasks initially, then eventually making it a free-for-all. I cut thin cardboard packaging first, using the blade’s tip and drawing back in a ripping motion. The knife did fine. 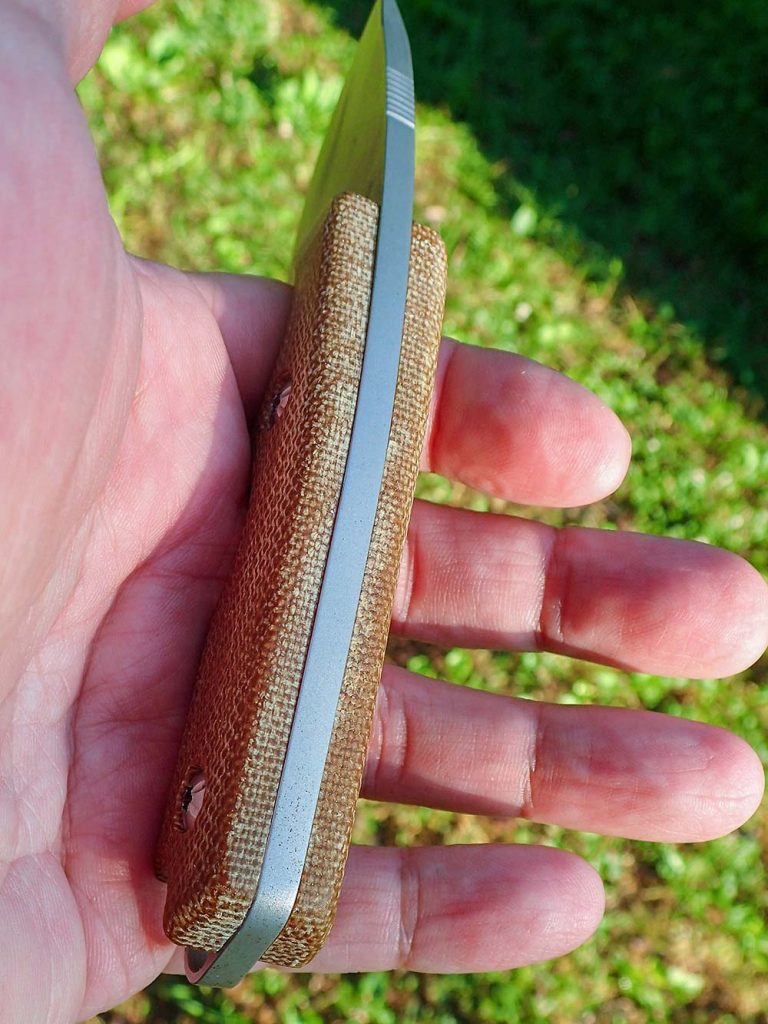 The hand-filling scales of the Orion are crosscut brown Micarta. There is an exposed tang for glass breaking or nut cracking.

I sliced through jute twine and thin nylon cord, nothing too fibrous yet. I cut a scrap pair of earbuds with thin wire next, all without issues. Duct tape and zip ties were on the list as an urban survival task, just in case anyone needed to slash through bindings while rescuing someone—it could happen.

I sliced heavy scrap leather using what little belly the knife had and the blade’s tip dragging it back. I sliced paracord using a chest-lever grip with the cord looped over the blade. It wasn’t instant, but it did get through. At this point, the blade was losing its initial keen edge.

The last hard chore for the Neptune was cutting through weedeater string, which is hardened monofilament nylon and on the thick side. It got through it and soon required an edge tune-up. 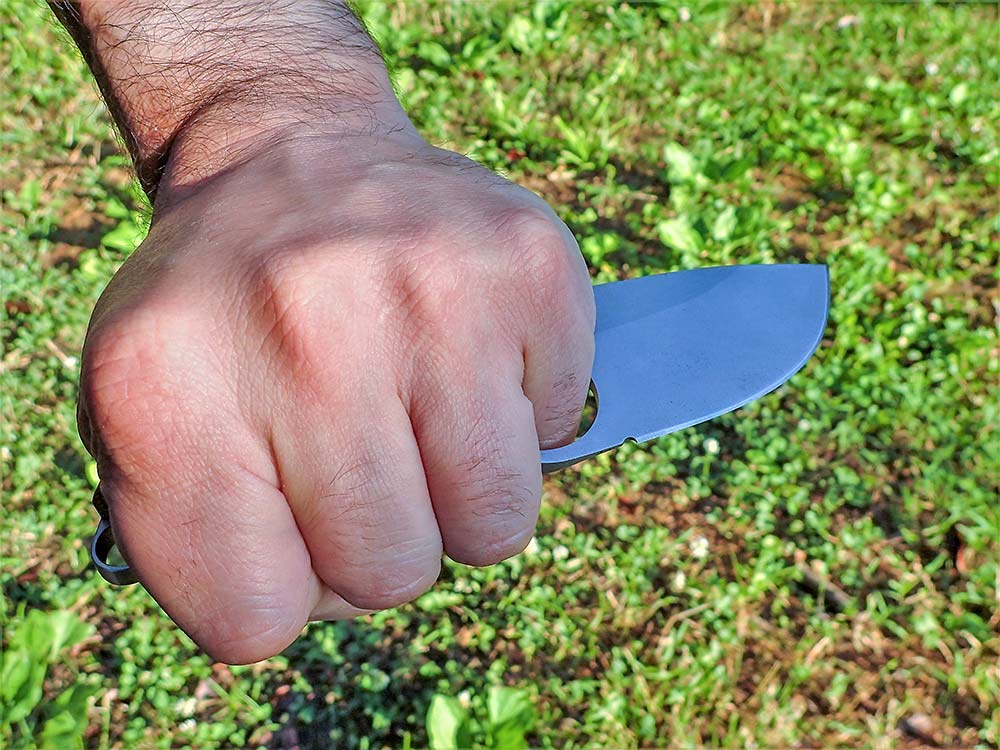 For self-defense, the Jason Tietz Orion can be used with a punch or for blocking. Utility and self-defense knife all in one stout package.

I’ve been eyeballing Jason’s bottle openers for several months, and seeing them up close was a pleasant surprise. Bottle openers come in many shapes and sizes. They are essential items as most of the world’s beer and soft drinks (outside of the USA) are bottled and must be popped open. When I travel abroad, I make sure to have at least two accessible at all times, even on airplanes.

Both V3 Moby Whaler bottle openers are made from titanium with a bead-blast finish and burst mill pattern. Jason sent me a small one (mini) and a much larger version. Initially, I gravitated towards the smaller of the pair, as it’s much easier to attach to a key ring or carry in a pocket. I found it takes two to three tries to get a bottle cap off.

I used it exclusively for the first few days before giving it a break and using the larger Moby. The big boy Moby had its own leather sheath and was ready for action. Every time I used this one, it removed the cap in one go—every cap, every time! 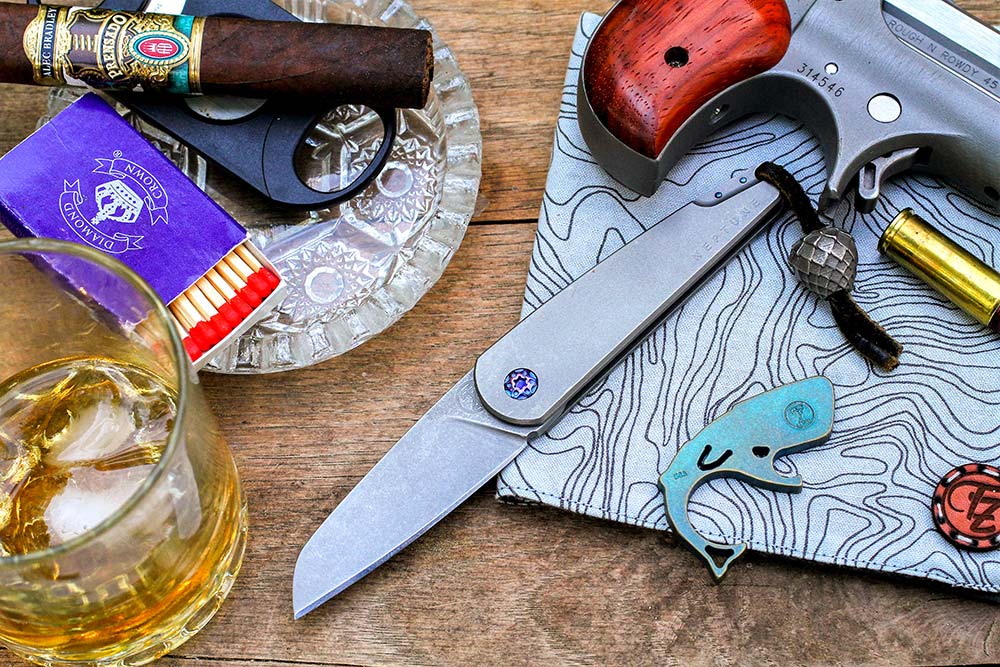 The Neptune and Mini Moby bottle opener are two offerings from Jason Tietz. Two formidable EDC items for the gentleman in you.

Any of Jason’s EDC items are one of a kind. That’s what you get with a custom maker, truly original pieces of art and utility. Consider Jason’s work if you fancy knives, outdoor cooking, prybars, bottle openers, or sharp pokey things. I’m eager to see what Jason comes up with next. 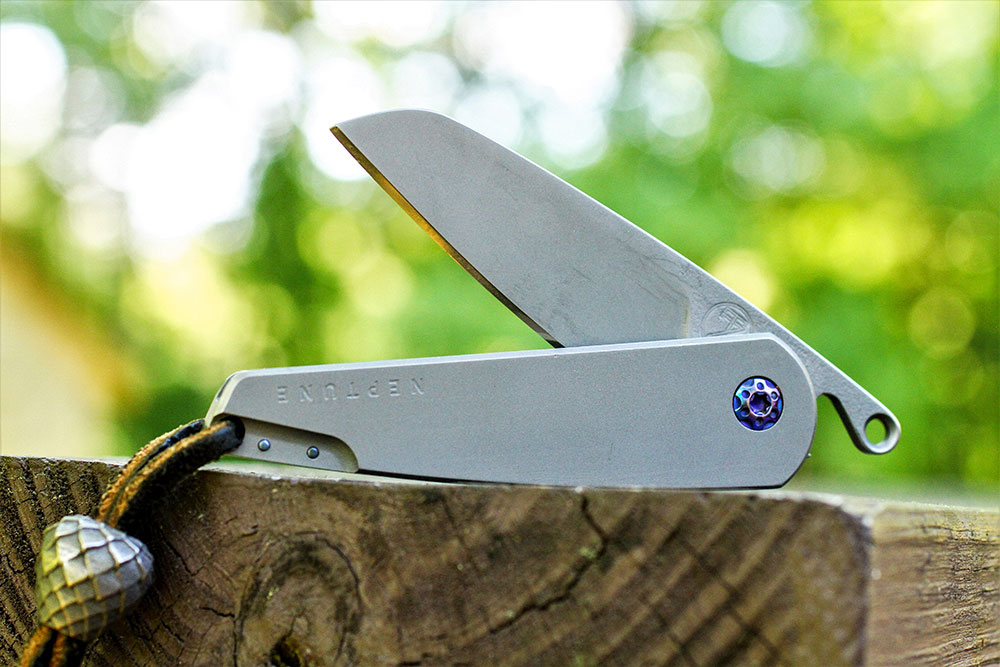 The Jason Tietz friction folder, the Neptune, is all elegance. S35VN steel with titanium scales and bronze washers. 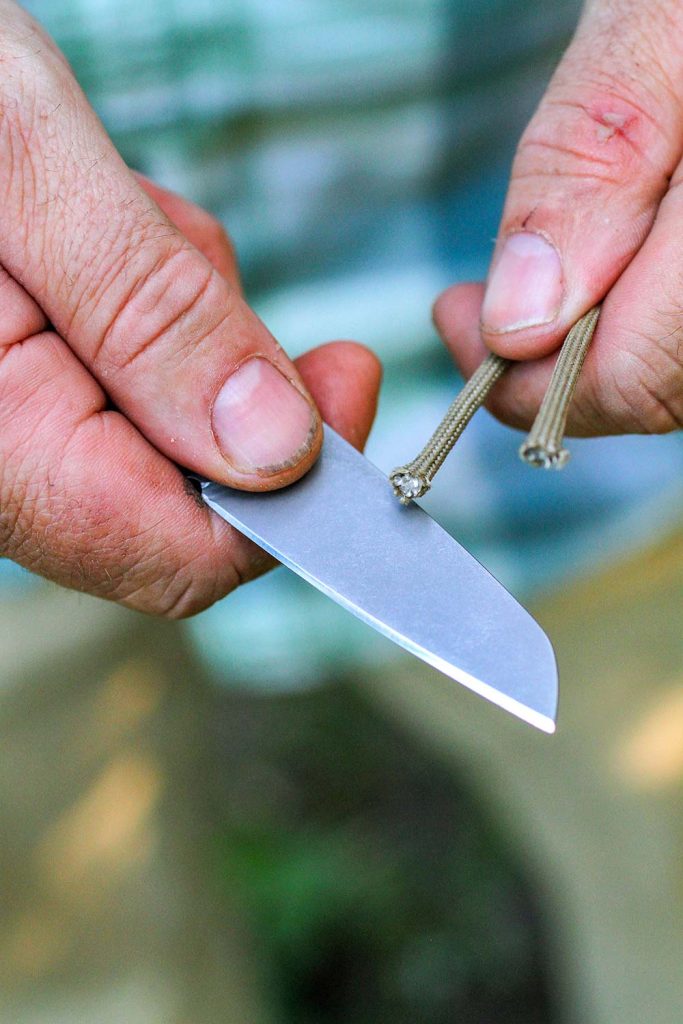 Paracord was cut in a chest-lever grip with the Neptune. The knife remained sharp until the cord-cutting when the S35VN started to show signs of being human. 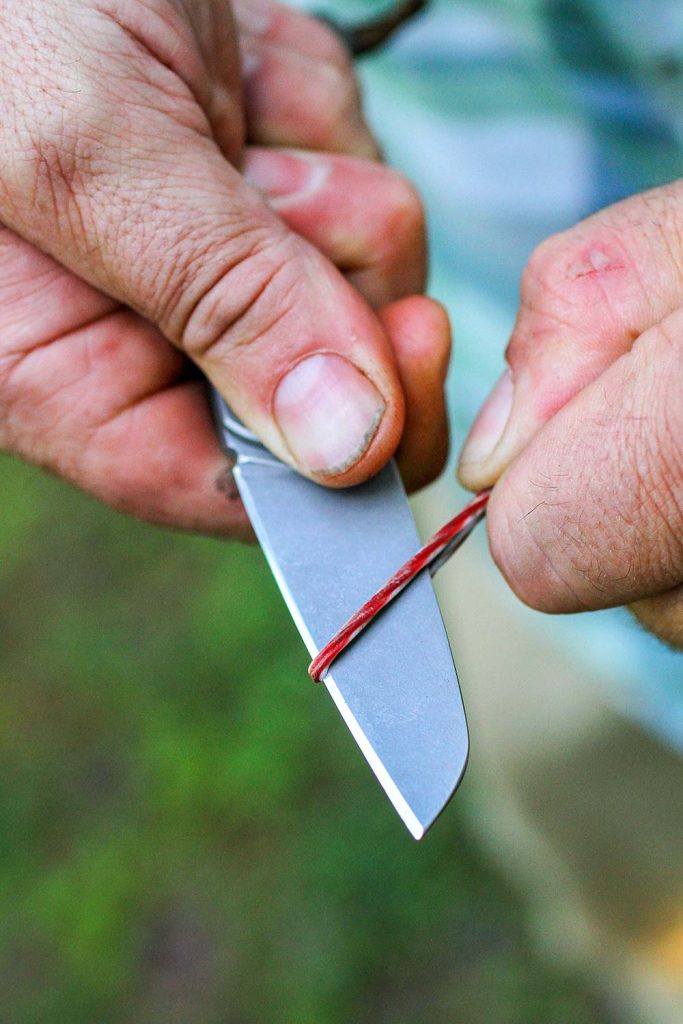 Weedeater cord was a challenging task. It often cuts better with a serrated knife or very toothy steel. However, the Neptune got through the tough cord. The Neptune friction folder was put through a gentleman’s EDC gauntlet with a plethora of materials, including cardboard, leather, paracord, zip ties, and more fibrous materials. 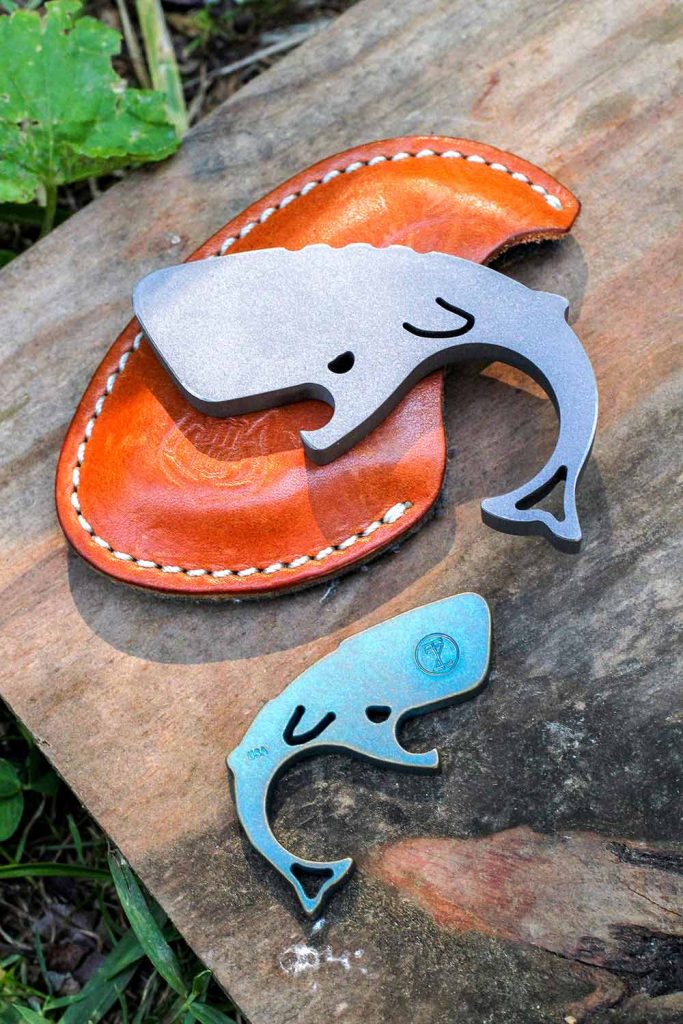 Tale of two Moby bottle openers. The smaller Moby is unobtrusive and carry-friendly, while the larger Moby makes quicker work of bottle caps. Behind the scenes look at the Tietz Designs workshop. Jason is a one-man show and makes his designs in small batches or custom-made. 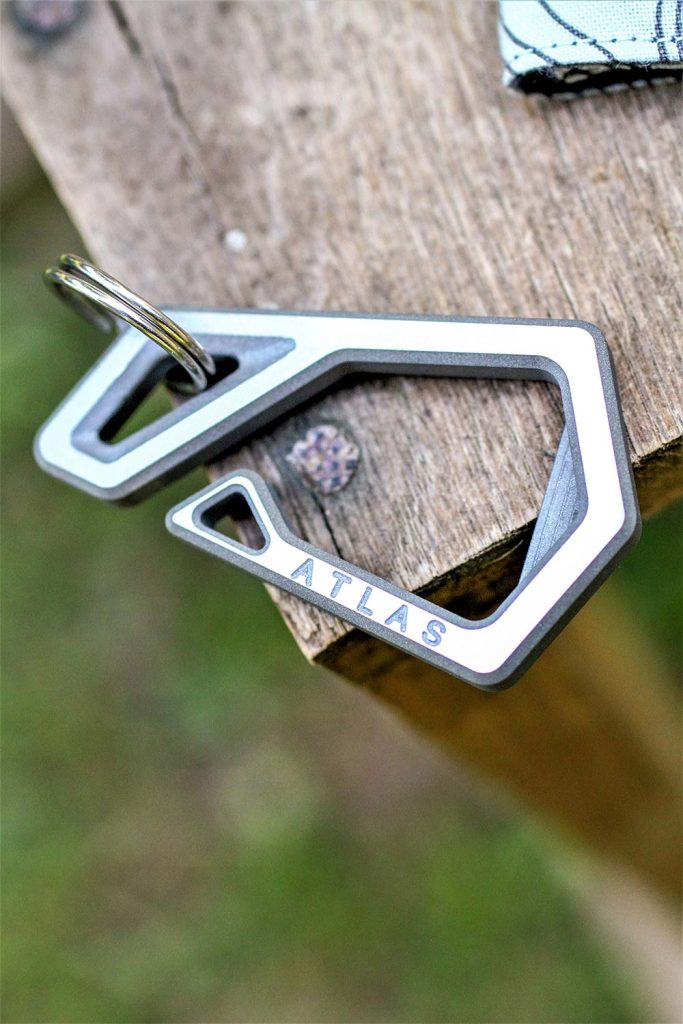 The Atlas is another Tietz Designs creation that holds your keys and opens up bottles.

Jason approached Michigan-based company White River Knives with a few designs while looking for a knife company to produce a few prototypes for him.

A CHAT WITH JASON TIETZ

I caught up with Jason and asked him some questions about his work.

KI: Can you tell me about your style of designing and manufacturing that makes you different from the rest?

Tietz: “I try my best to adhere to the design principle of function over form. The design of a product should primarily relate to its intended function or purpose. You will often see that the product has a driven design aesthetic because of that purpose. The final product is never the first thing that I sketch or prototype. Designing a product that checks all of the boxes can be a very long process but always worth it.”

KI: How did you become affiliated with Rewild and White River Knives as their designer?

KI: What was your first knife?

Tietz: “The first knife I remember owning was a small blue Chinese folding knife about 3 inches long with a serrated blade. My dad let me buy it at a gun show with the money we made when I was 7. I thought it was cool because it had a red LED light built into the handle.”

KI: Is there a knifemaker whom you looked up to and studied alongside?

Tietz: “There are many knifemakers that I look up to in the community. I’ve always admired everyone’s take on different knife styles and heard their thoughts behind their products. I have been self-taught, and it has been a bit of a learning curve for me coming at it on my own, but that is one of the reasons I enjoy it so much. It’s a fun challenge.”

KI: What steels and materials do you favor?

Tietz: “I use S35VN steel mostly for my blade steel because of its corrosion-resistant properties and long edge retention. For other details, I like to blend both traditional materials and modern materials together to create timeless designs.”

KI: What is your favorite pattern or type of knives to make?

Tietz: “Small EDC-type fixed blades are my favorite type of knives to design, mostly because that is my favorite thing to use.”

KI: What knives of yours or any others do you EDC?

Tietz: “My favorite knife design of mine to EDC is the FC-3.5 Pro. I like to Scout-carry; it’s nice having a fixed blade instead of a folding knife because of its capabilities depending on what I am doing. I have used it for many things, from chores around our family farm to food prep on my hiking adventures. The FC-3.5 Pro is such a versatile knife I continue to find new ways it can come in handy.”

Atlas, the mythological Titan who holds up the sky, was the design and naming inspiration for the Tietz Design Atlas Key Hook. This robust key hook is meant to hold your keys close at hand and doubles as a bottle opener. It’s made from titanium for strength without sacrificing weight. It is an ultra-stylish minimalistic design from Jason. If you’re on the hunt for a better way to carry your keys, get an Atlas.